So, this blog is about my Bungee Jump Wedding

Why would I write about my Wedding on a travel blog? I mean, the Honeymoon is understandable, at least it was actually a big road trip. But my Wedding? Doesn’t really make you think ‘travel’, does it? Then again, in a way, it was a “destination” wedding and I did a bungee jump. So maybe it does fit.

My reasons for putting my wedding on here are simple really. Firstly, it’s to say a big ‘Thank You’ to all the people (and the companies) that helped us on the way. Also to give you an insight to who I am, what I’m like and correct some of the errors the papers made (yes, my Wedding was worthy of press and TV, apparently having a Bungee Jump Wedding is newsworthy…) Plus, I got married a few hundred miles from home, so it kind of fits in with travel.

I won’t go into too much detail, as I’m sure no one wants a full diary entry on this. But I’ll give you a brief overview.

I hope you enjoy reading this as much as I enjoyed the day. 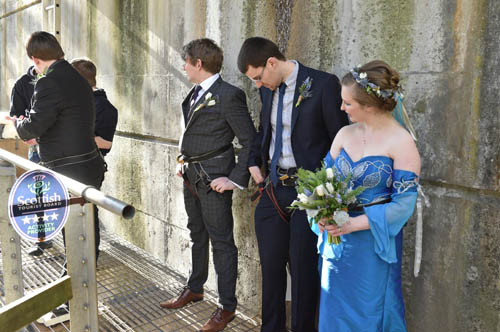 A Bit of Background

First correction of the papers: I did not get engaged at the age of sixteen, that would be a bit crazy, even for me. The papers said that I got engaged eleven years ago, wrong. I got married on the day we’d been together for eleven years after being proposed to a year before to the date.

So me and my (now) husband got together young, at college and spent quite a bit of time travelling together since Uni. We never really planned to get married, it wasn’t something we really talked about. Marriage always seemed to be too much like ‘settling down’. But then when we were climbing Kilimanjaro for our ten year anniversary, he planned to (and did) propose on the day we’d been together for ten years. He said it was the perfect time and place, so if we’d decided to marry later in life he’d regretted not doing it there and then. Unfortunately for him, I’ve never liked the idea of having a long engagement, so the planning began.

We both knew that we didn’t want to get married the ‘normal’ way. So we didn’t. We decided to literally ‘Take The Plunge’. And by that, I mean jump off a bridge, seemed logical to us. We found the perfect place near Blair Atholl and since we were up in Scotland, how could we celebrate without a Ceilidh? 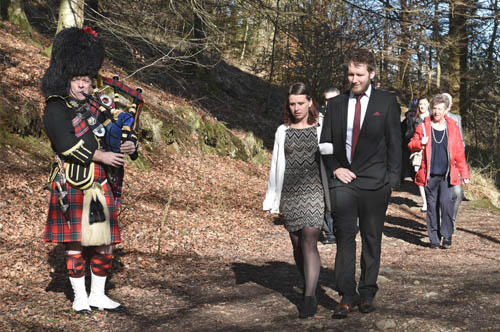 The day of our bungee jump wedding arrived quickly. We told none of the guests, only the Best Men (I had a Best Man instead of Bridesmaid) knew what was happening. The location was the Highland Fling Bungee at Killiecrankie. I’d highly recommend the Highland Fling for a bungee jump. It’s a beautiful spot and the guys are absolutely awesome – our kind of crazy anyway! Armed with a dress that had been specifically designed to fit the harness (designed and made by Judith Craig Couture) me and Dave, the Best Men and Parents arrived at the visitor centre to meet with our Humanist Celebrant, Jane Bechtel (whose name the papers spelt incorrectly, it was a bad phone line though…) and our photographer, Iain Struthers. 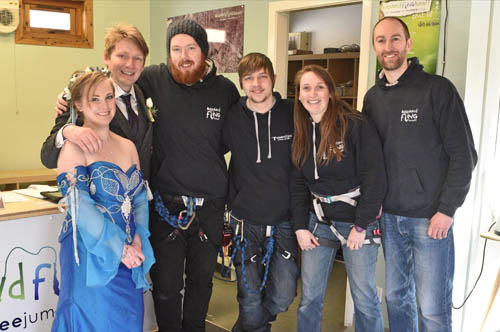 So after the initial shock for the parents, we went through the usual health and safety bits and bobs, got weighed, and everyone got harnessed up. During this time we realised that I’d left that all the important paperwork at the hotel. Luckily the guests had not quite left yet, so we were able to get in touch with someone who was able to grab it. Jane would then meet them off the bus (supplied by Elizabeth Yule Coaches) to get the all-important paperwork so we could actually get married.

All harnessed up and ready to go, we got in the Highland Fling minibus and went to the jump site. I hadn’t thought about the climb up to the pod when my dress was designed, so the ladders were a little tricky! We were all up in the pod under the bridge as our guests were walking over our heads to be led down to the viewing area by the piper Ian Sinclair.

I won’t bore you all with the details of the ceremony, we kept it short so the guests wouldn’t freeze. We’d set up a speaker so that the guests could hear the ceremony. We went through what you have to go through; hand-fasting, vows, rings (which we made with ‘Make Your Own Wedding Rings‘), the legal declaration and paperwork. Lastly, we were declared ‘Mr and Mrs Took’. After this, Jane could no longer be professionally involved (as marriages must be conducted “safely and with dignity” – apparently jumping off a bridge doesn’t meet these criteria), so she stepped back as we shuffled over to the jump platform. 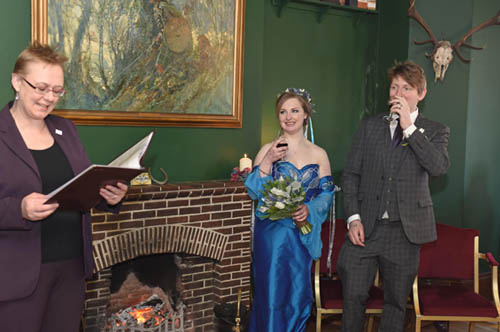 Another thing we did differently… I didn’t take my husbands’ name. We had decided to take a new name together (once again telling no one of our plans). Took has nothing to do with Lord of the Rings, it’s worse, it’s for the pun. We completely ‘took’ the Mick. I guess we really didn’t do what you’re meant to do when you get married…

Personally, I think taking the husbands’ name is an outdated tradition. I wasn’t taking Daves’ as when hereditary surnames first came to England, a woman who was married had no surname and pretty much ceased to exist. This can still be seen today when people address post to “Mr & Mrs Husband’s first initial & Surname”. So I don’t like that and wasn’t doing it. Though I still get occasional post addressed to “Mr & Mrs D Took”, which annoys me no end. I have my own name! Rant over…

It seemed pointless to turn this tradition on its head and have him take mine. We toyed with double barrel, but our surnames wouldn’t have worked together. Deciding on a new name together seemed like the best option. So we ‘Took’ the name.

A few safety checks and clips later, we were ready to jump. I threw my completely biodegradable bouquet (made by Coach House Flowers) off the platform, and then we followed! The tandem was actually much easier than doing a single bungee. By the time you get to the point where your brain kicks in with “that’s a long way down…” the weight of the other person has pulled you past the point of no return.

There was a further shock when one of the Best Men decided to jump too! 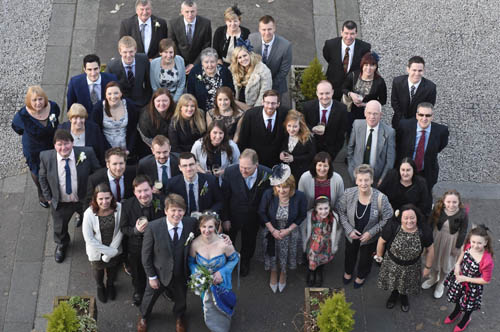 After getting the harnesses off we went back to the hotel (The Atholl Arms), where the guest had already been taken to. I had to head up to the room for the removal of walking boots and base layers, before heading into a side room for mulled wine and nibbles. Whilst everyone was sipping and nibbling we gave a bit of an explanation about what’s just happened and the name change for the guests. We also did some of the normal stuff like the Best Men Speech and the cutting of the cake. At this point we added a Scottish tradition, drinking from a Quaich, which is a Scottish two-handled drinking cup.

Obviously we then had the Wedding Breakfast before the Ceilidh, which is traditional Scottish dancing. However, we had to have a caller as we didn’t really know what we were doing. The night ended too fast, but the next day it was on to the honeymoon. 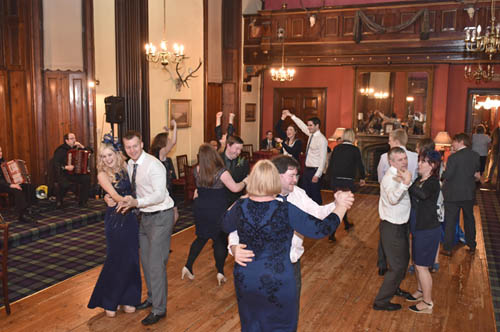 I would like to thank the following for all the help they gave to arrange our bungee jump wedding and for all they did on the day. Every single person and company were brilliant, they listened to what we wanted and were fine with our lack of normality. I honestly couldn’t recommend them enough. So thank you all: