My Kilimanjaro Adventure Day 6 begins at the camp of Karanga Valley (4,200 m). During this day’s trek the group will cover just over 2 miles (3.5 km) ascending to 4,600 m. According to the itinerary reaching the Barafu Camp should take about 4 hours. Today was the reason me and Dave had decided to tick Kilimanjaro off our bucket list – we’d been together for 10 years.

Missed any of the previous Days Adventures on Kilimanjaro? Go back using these links:

Me and Dave were awoken for breakfast and given water to wash with. It was a little later than when we were normally woken up. We washed and headed over to the communal tent. Breakfast was the same again, the rough porridge, sausages, eggs and toast…

After we had finished Faraja came in to talk to us. He told us that today’s trek was only short and we should be there a little after lunch. We would be summiting that night. He asked what time we wanted to set off that night and what time we would like to be reaching the summit. We all wanted to reach the summit for dawn. At this he turned very serious and told us we would have to travel quicker.

Not walking quicker, just little things that he’d noticed, like one person would stop to go to the toilet, then 5 minutes after we set off again someone else would want to go. We had to stop this if we wanted to be at the summit for dawn and not woken too early in the night.

Faraja also used this opportunity to apologise to us. He told us that over the next couple of days him and the others may start to smell, as they would not be washing. The reason for this was that we had passed the last place where fresh water can be gathered. Therefore if everyone washed, the porters would have to walk all the way back for more water! We were all pretty quick to say we wouldn’t need water for washing either!

So we all got sorted for the walk ahead, absolutely determined to complete it in record time. No stopping and starting, and if we did stop we would all have a drink/go to the toilet/put on a layer.

After one last trip to the toilet with a view, we set off on the path me, Dave and Gemma had had a preview of the night before. Up and over the hills, and back down into a desert. 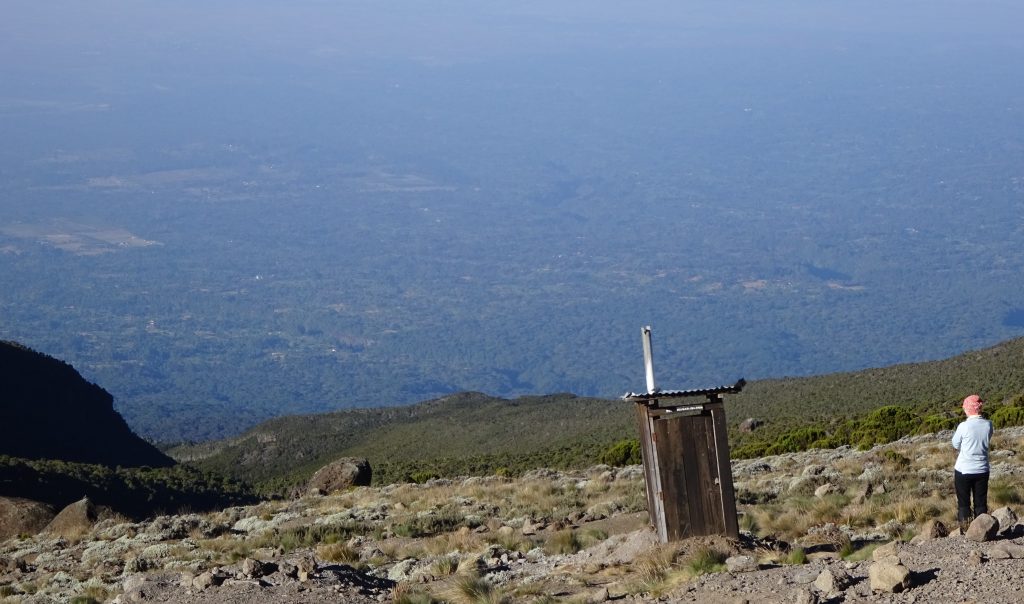 The Loo With A View

The desert was amazing. It was like another planet. The sun was beating down on us and although we were high up we all began shedding layers – soon I was in just my base layer top (and trousers, obviously). I didn’t expect it to be so warm!

We’d only had one or two short stops, it was going well! Then Faraja called lunch time!

Looking Back At Karanga Camp

So we stopped for the usual lunch of bread, a hard boiled egg, fruit and juice. As we were eating the porters began passing us. They were singing. We’d heard them singing this before, so we asked about it.

The start of the song translates as “Welcome, Welcome Sir” or you could change it to “Welcome, Welcome Friend”. I can’t fully remember the whole translation, but it was basically welcoming you to Kilimanjaro, then had a lot of “Hakuna Matata” in there. Who knew Disney didn’t actually make this up?

We all sat round and learned the song. We were all brilliant at the “Hakuna Matata” bit, but I know at least my pronunciation was rubbish for the rest of it! 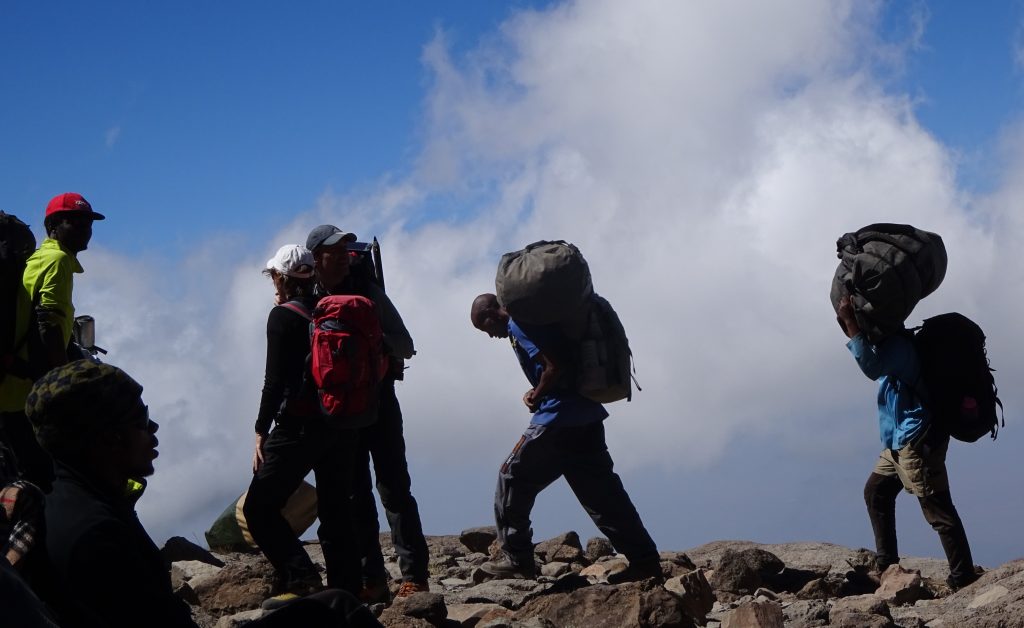 We set off again and Faraja told us there wasn’t much further to go. And he was right! We got to camp and signed in.

A few minutes after we got to our camp, the Germans reached the hut to sign in. We beat the Germans! The Germans who had trained at altitude and were finding it all easy! We beat them, so we must have improved our sped! Success! We probably shouldn’t have been as happy as we were!

As we had plenty of time before our early dinner, we chatted for a while. Then Dave peeled off and walked over to the cliff edge, looking out over where we had walked that day. I followed him after a few moments – looked like a good view! 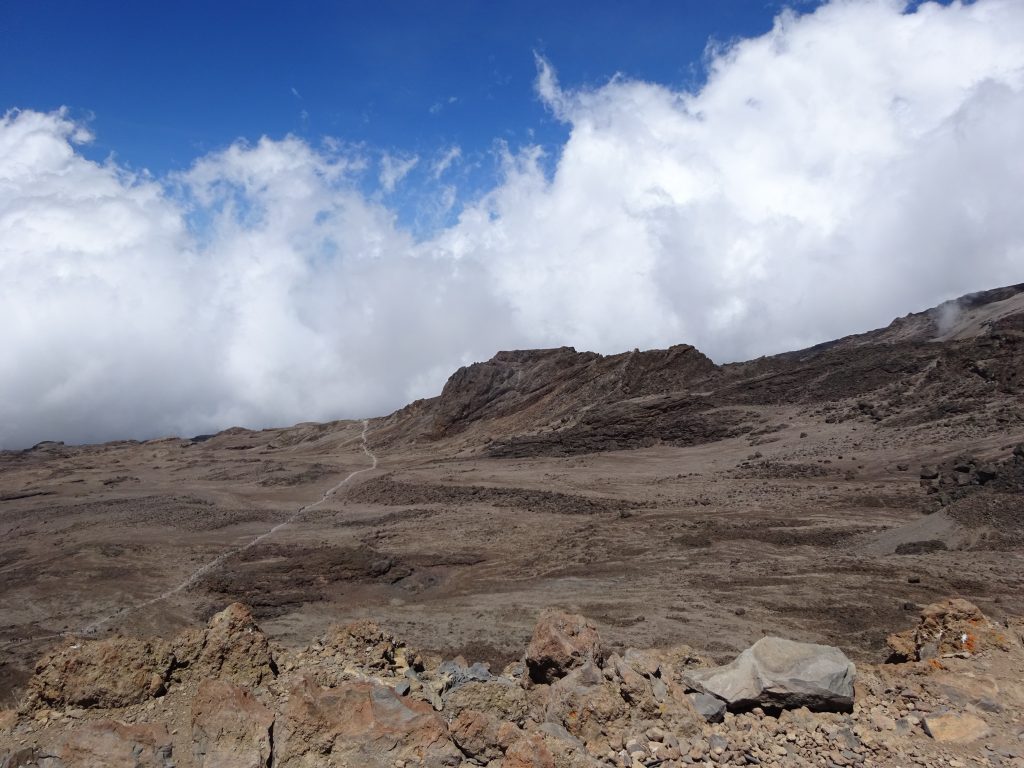 The Path We Had Walked

And here is where it gets a little awkward for me to carry on with the story… As this is the moment Dave proposed to me… No, he did not get down on one knee, there were no romantic words, the easiest way to describe it is that he proposed in the style of Beaker from the Muppets! I was shocked. I’d thought it would never happen and was happy to just be together. Who needs a bit of paper, right? But i still accepted, how could I say no? He’d carried the ring up the side of a volcano… Just like Frodo…

He told me he had to propose. Ten years together, up Kilimanjaro. If we decided to tie the knot a few years later, he’d regret not doing it at that point. Fair enough!

Unfortunately, altitude had had an effect. The ring didn’t fit! So Dave would have to go on carrying it for now!

Preparing For The Summit

After our little time apart from the rest of the group, we rejoined them in the communal tent for an early dinner.

One side note… One thing I did realise during the Kilimanjaro Adventure, the higher you climb the smaller the holes in the toilets get! I don’t quite understand it! It’s hard enough for a girl to aim, why make it harder the higher we go?

Anytway, back to the story! I was a little unsure whether to tell them the news or not. But Dave decided to. Awkward!
After cucumber soup, stew and rice, Faraja came in. And before he could speak everyone else had told him about me and Dave! He was a little worried about the fact that Dave had an expensive, and sentimental, item with him, but oh well! I’m not sure I fully understand why Faraja was always worried about our belongings, is it incase we lost them by misplacing/dropping or is theft a regular occurrence?

Anyway, he came and made arrangements for the night. That night we would be summiting. So we agreed on the time to get up. He advised us to take warm water when summiting, as that would reduce the likelihood of it freezing! Then it was off to bed for an early night! I found it hard to sleep, as it was still light and I was excited yet nervous about that night! 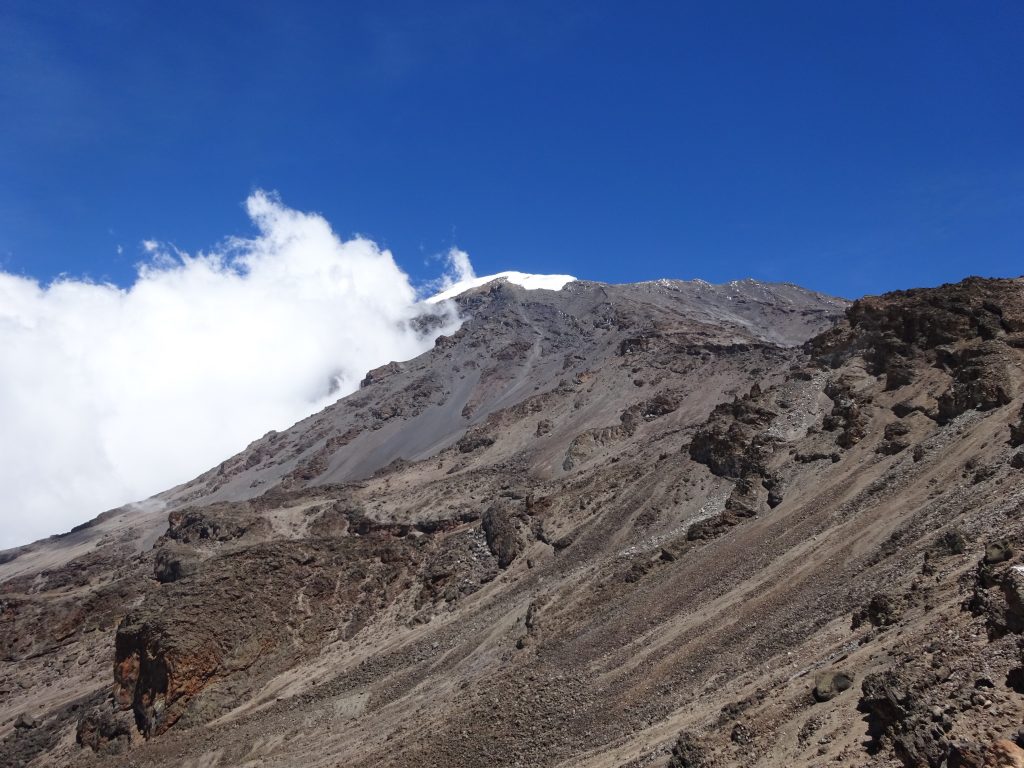 Read about the next part of the Adventure here – Summiting