The introduction to Romeo and Juliet states “In fair Verona, where we lay our scene” making the Italian city of Verona known for being a city of love. And Verona is totally using this to their advantage. There are spots all over the city that are linked with the romantic tragedy of Romeo and Juliet in Verona. The couple has become a symbol of love, practically worshipped worldwide by Shakespeare lovers and those that just love romance. And when in Verona the most visited place linked to the star crossed lovers is Casa di Giulietta (the House of Juliet). Here you will find Juliet’s balcony, where some of Shakespeare’s most romantic prose is played out.

Firstly, I’m going to address the elephant in the room. Is there any link to this house and the doomed couple in the play? No. Absolutely none. Romeo and Juliet are purely fictional characters and never lived. They are not real. In fact, it wasn’t even Shakespeare’s idea, it is based on the poem by Arthur Brooke, published in 1562

If you want some real Shakespeare history, visit the Shakespeare Birthplace Trust Houses, or read about my Adventure in Stratford-upon-Avon

So how come there’s Juliet’s House in Verona? Firstly, can you blame the tourist board of Verona? What a great, easy PR campaign! Basically already written. The drama of Romeo and Juliet is so ingrained in our minds it’s easy to forget that the characters weren’t real. There are loads of places all over Verona linked to Romeo and Juliet (and I love it).

The Casa di Giulietta has become known as Juliet’s House as it once belonged to the Dal Capello family, known as the Cappelletti, which is essentially the Italian for Capulets (Juliet’s surname in the play). 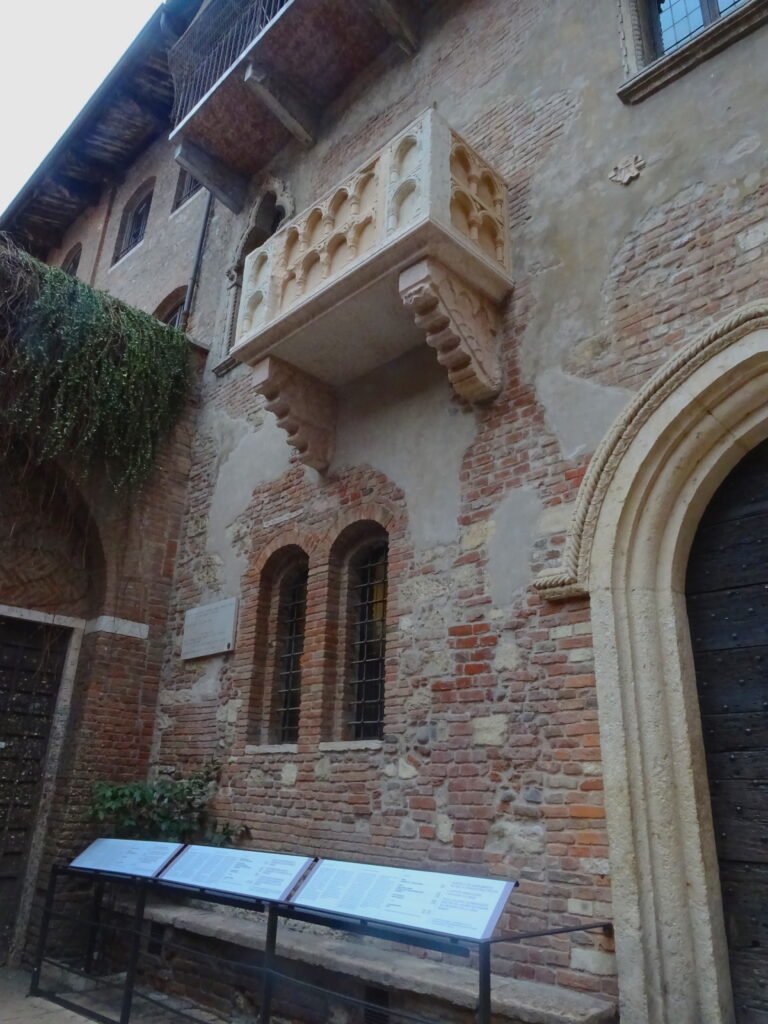 The Pretty Balcony Is A Late Addition

Also, the pretty balcony helped with this house becoming known as Juliet’s House. Even though this feature wasn’t even added until 1936. So, unfortunately, everything here is fake. But that doesn’t mean you shouldn’t visit!

As I have already stated, the house and balcony are completely fake and have no link to Shakespeare’s tragic lovers. Despite this, the emotional pull of the place makes it worth visiting.

The courtyard itself is completely free to enter. From here you can see the famous (if fake) balcony of Juliet. Weirdly, there is a bubblegum wall where people stuck notes to Juliet. Obviously some padlocks too, the usual “romantic” stuff. Be sure to look for the quote from the play in Italian and English, on the wall of the house too. 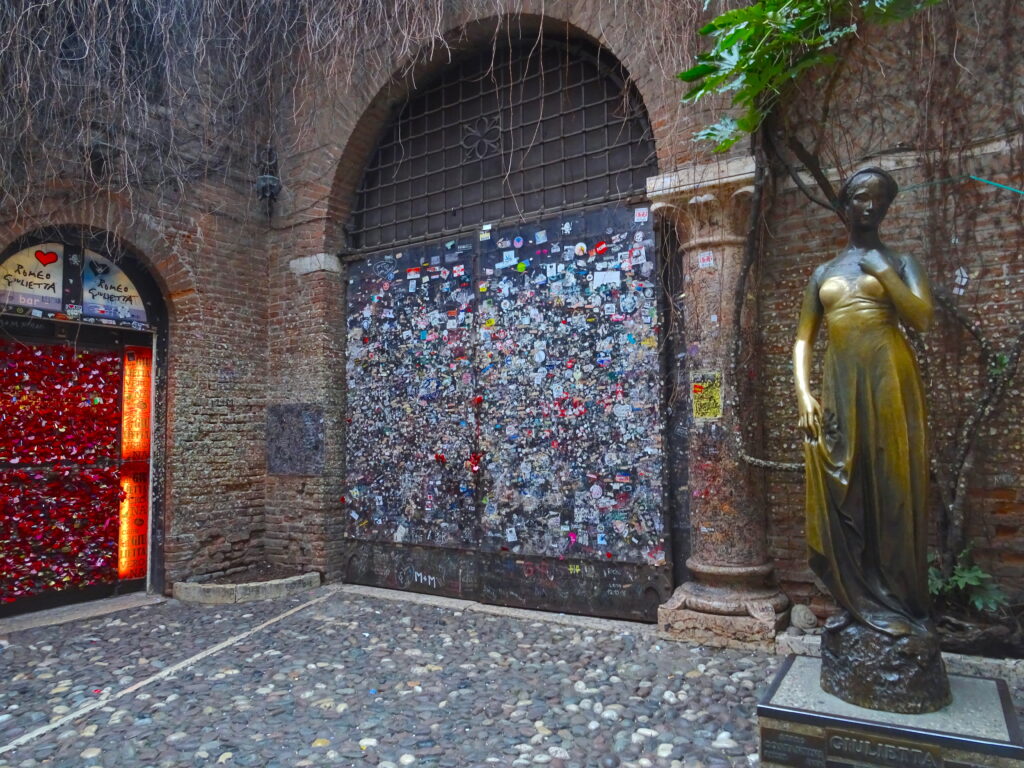 The Bubblegum Wall Is Just Weird 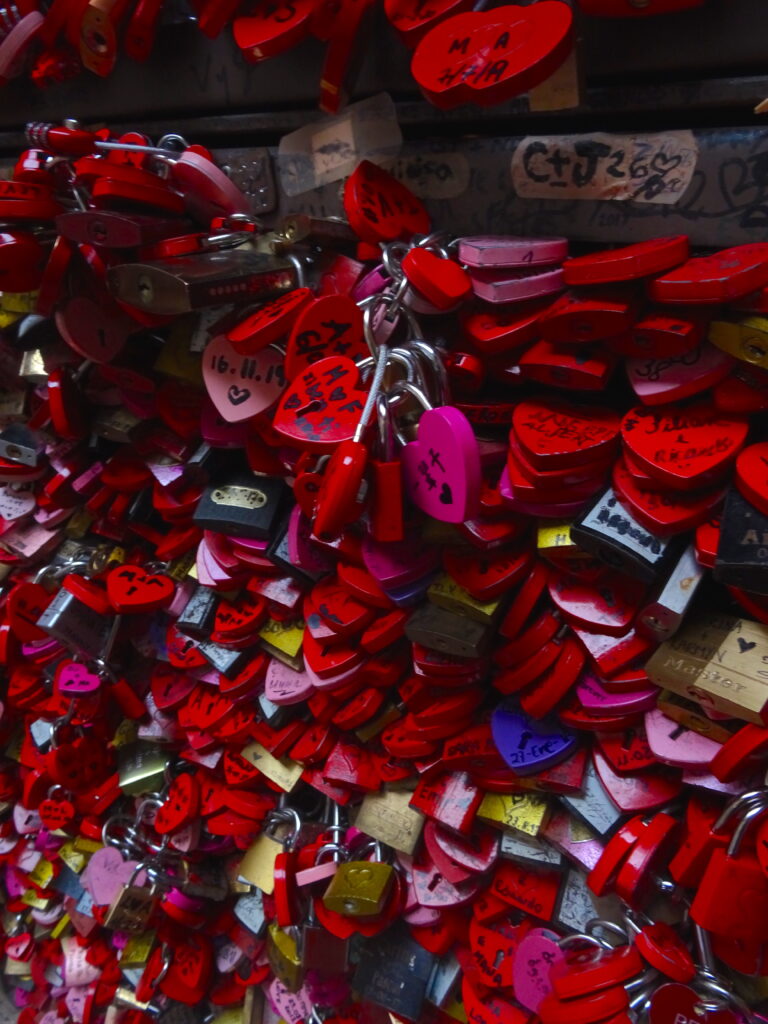 Anywhere Connected With Romance Has To Have Padlocks, Right?

There is also a statue of Juliet inspired, I assume, from the quote near the end of the play:

“I’ll raise her statue in pure gold. As long as this city is called Verona, there will be no figure praised more than that of true and faithful Juliet.”

A Charm For Love

Weirdly, the statue has become a charm for luck in love and fertility, just rub Juliet’s right breast. I don’t really have to point this out, the statue has been polished by many hands wishing for love, so much so the rubbing has moved to other places on the statue., but traditionally it is the breast to be rubbed. Personally, I have a few issues with this…

Firstly, Juliet is thirteen in the play. Thirteen! Please stop rubbing the breasts of a statue of a thirteen-year-old girl. It is weird. (Yes, the statue looks older, but that is not the point). You may say “it’s only a statue”, but that leads me nicely on to my second problem… Why is it that EVERY statue of a woman that is meant to bring luck in some way gives luck by having her breasts rubbed? Why not hold her hand? Or just something less, you know, sexual. Or can we start rubbing the crotches of male statues for luck? Either works for me. 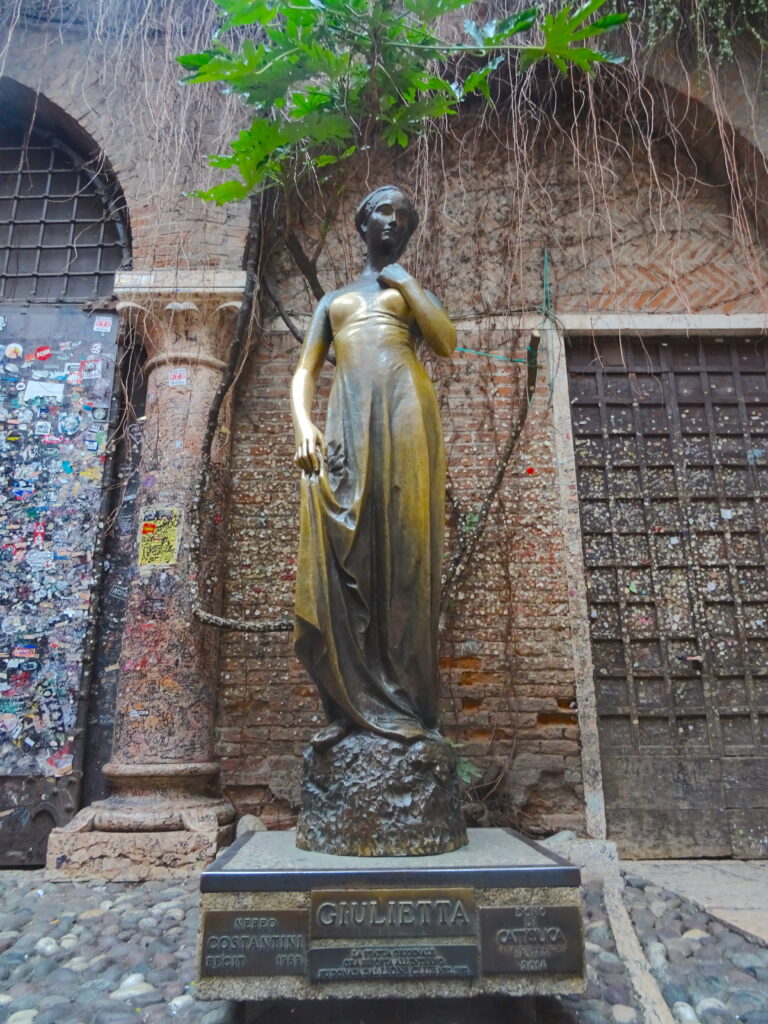 You Can See Where Juliet Is Rubbed For Luck

Lastly, what LUCK do you think Juliet will give? The story might be “romantic” etc, but it is also a little creepy how fast they fall in love and get married. And let’s not even mention the fact that Romeo and Juliet are definitely NOT lucky in love. They die! That is the whole point!

If you want to see another rant of mine about rubbing statues, check Save Bobby’s Nose

The 14th house itself has become a museum based around Romeo and Juliet. Inside you will find random displays, furniture from medieval times and props form film versions of the play.

But the real reason to go into the museum is to actually get on to Juliet’s balcony. It is the only way you will get up to the balcony. Though if you want a picture of your best Juliet impression, you will need to leave someone in the courtyard with a camera.

There is also a small charge to go into the museum at Juliet’s House.

Whether you plan to go into the museum at Casa di Giulietta or not, your best bet for the courtyard is to get there either early or late. It is a very popular attraction and so gets very crowded. 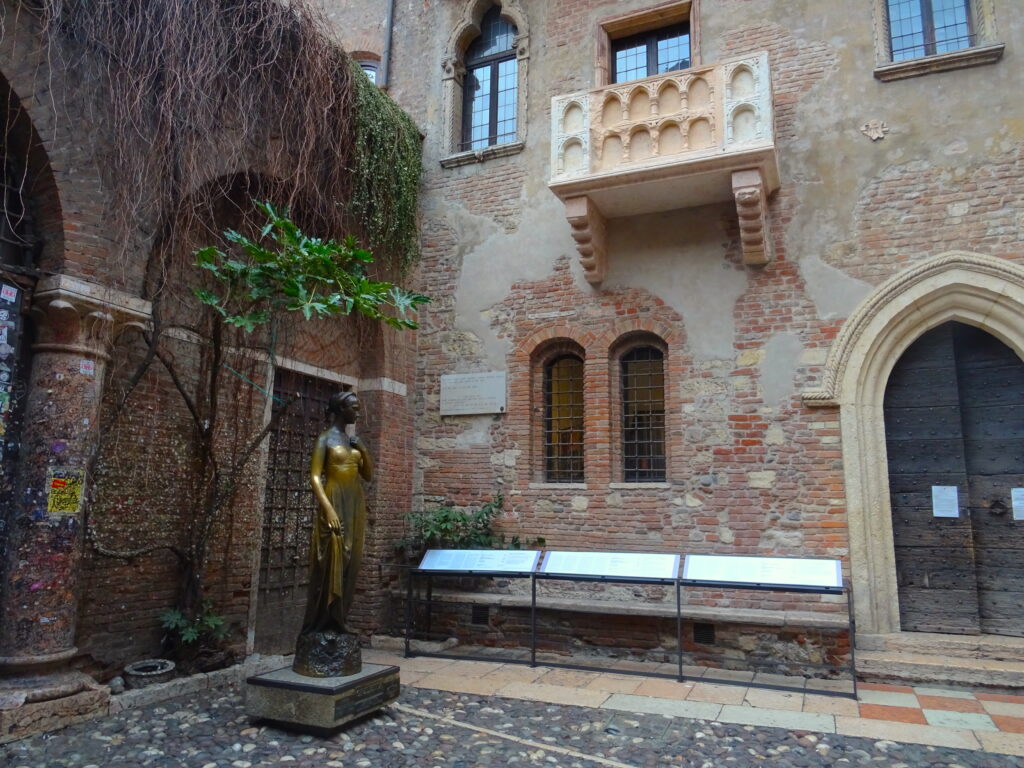 If You Want A Picture On The Balcony, Leave Someone In The Courtyard To Take Your Picture

How To Get To Juliet’s Balcony

Verona has a lot to offer and so is worth having a few days to explore. If you want to visit the courtyard and Juliet’s House by yourself it is fairly easy. On Via Cappello, the crowds will show you the way.

From Piazza Brà, walk away from the Portoni Della Brà and past the Arena (with the arena on your right). Take the left up Via Giuseppe, follow this street until the end where it meets Via Cappello. Turn right on Via Cappello, follow this until you see an archway on your left (probably with loads of people going in and out), go through this archway and you are in the courtyard of Juliet’s House. 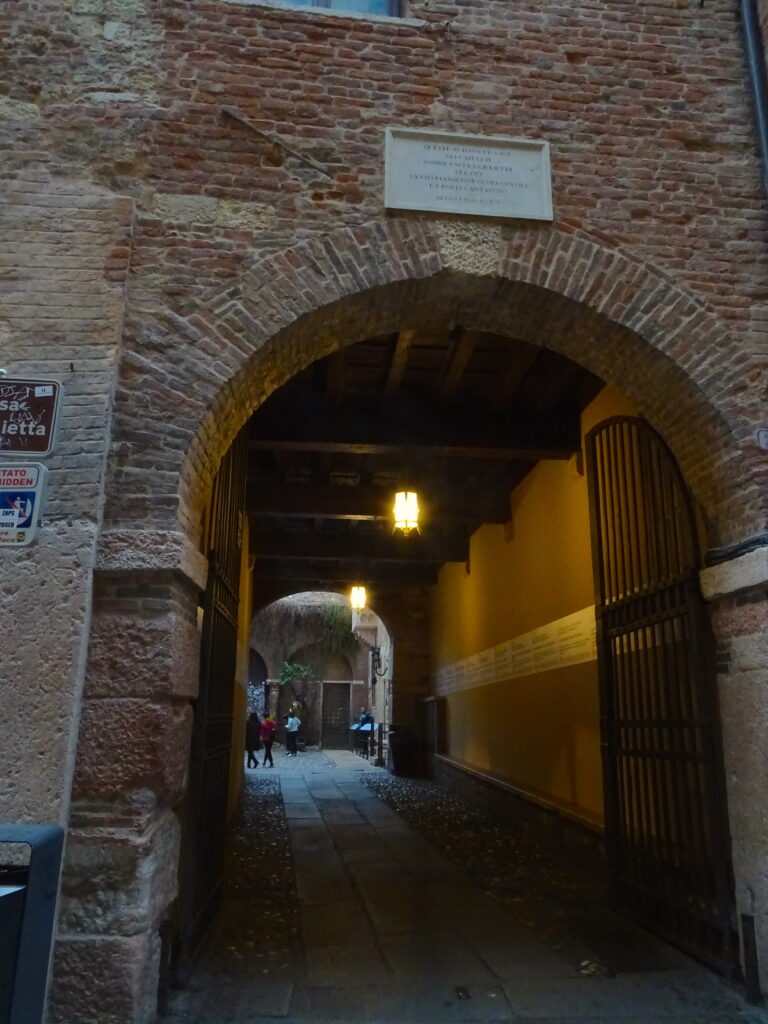 This Is The Archway You Are Looking For

Alternatively, you could take a tour to see Juliet’s balcony, like these:

The Highlights of Verona Small-Group Walking Tour: This 2-hour walking tour of the historic centre of Verona shows you the main tourist spots.
2-Hour Romantic Verona Walking Tour: This private tour is perfect for couples, visiting sites that have links with Romeo and Juliet.
Verona & Amarone Full-Day Tour from Venice: If you don’t have the time to stay in Verona, this day trip from Venice gives you three hours to explore Verona, plenty of time to discover Juliet’s balcony.

Check out more tours of Verona available on Get Your Guide. 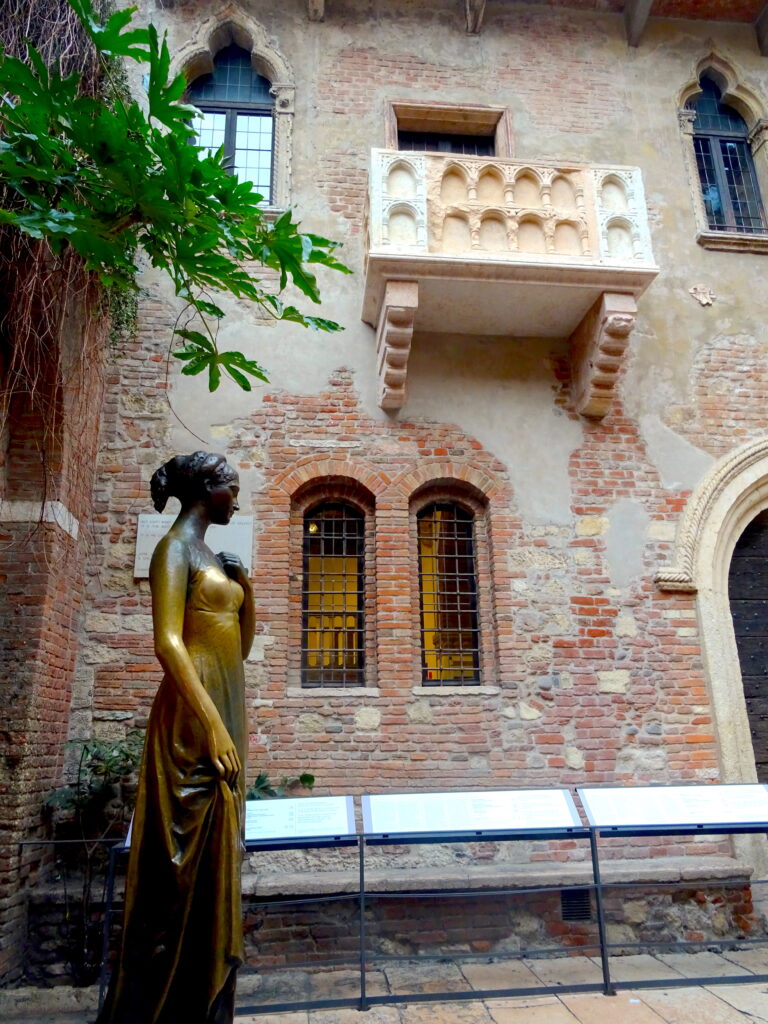 It May All Be Fake, But It’s Worth Visiting Juliet’s Balcony

Although Juliet’s balcony is fake and unlinked to Shakespeare’s famous couple, it is still worth a visit. A romantic courtyard that has become a sort of pilgrimage for couples. It’s also interesting how fiction can completely influence a city and inspire tourists.

Plan on visiting Juliet’s Balcony? Check out places to stay in Verona on HostelWorld 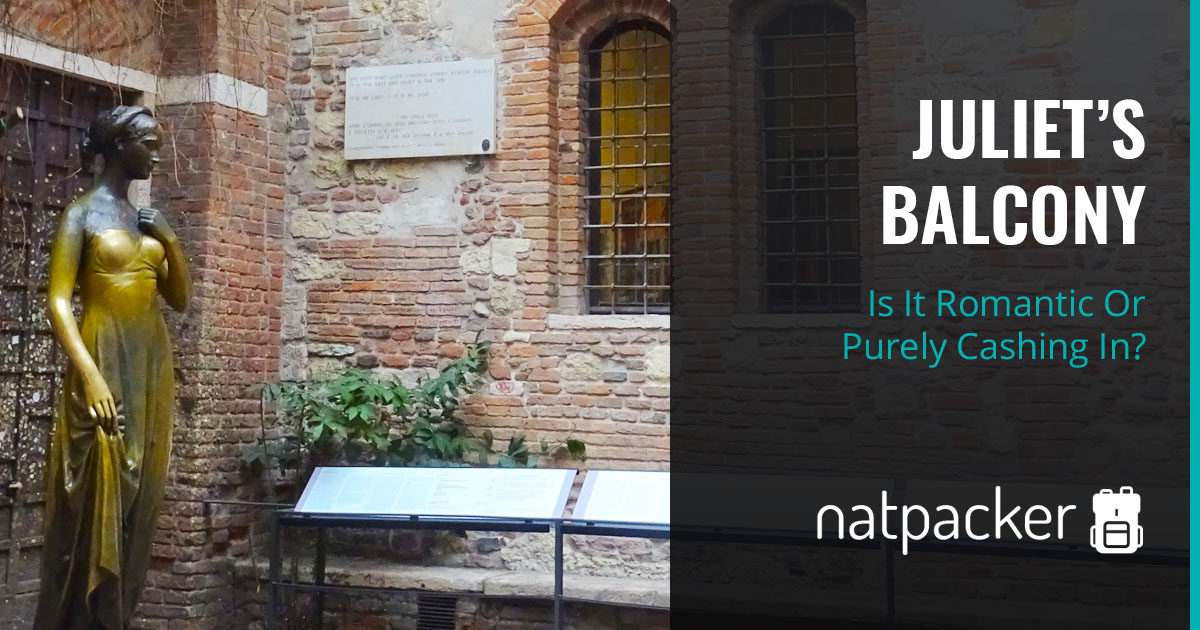