A little over a mile (about 2km) from a town of the same name, Tulum ruins (or Ruinas de Tulum) are located on 12 meter high cliffs, facing eastward over the Caribbean Sea. Not only can you explore the ruins here, but there is also a small beach. The complex is not that big, with small-scaled buildings found in a compact mass. But that doesn’t mean that they are not breathtaking. These are actually one of the best-preserved coastal ruins to be found.

If you are visiting the Mexican state of Quintana Roo on the Yucatán Peninsula, visiting the ruins of Tulum is a must.

The History Of The Tulum Ruins

Tulum was actually one of the last Mayan cities to be built. This city was a port for the city of Coba. Much of the city that you see today is believed to have been built after 1200 AD, and it reached its height between the 13th and 15th centuries. As such, the site is no match for the big Mayan cities, such as Calakmul, but its dramatic location makes the site well worth a visit. 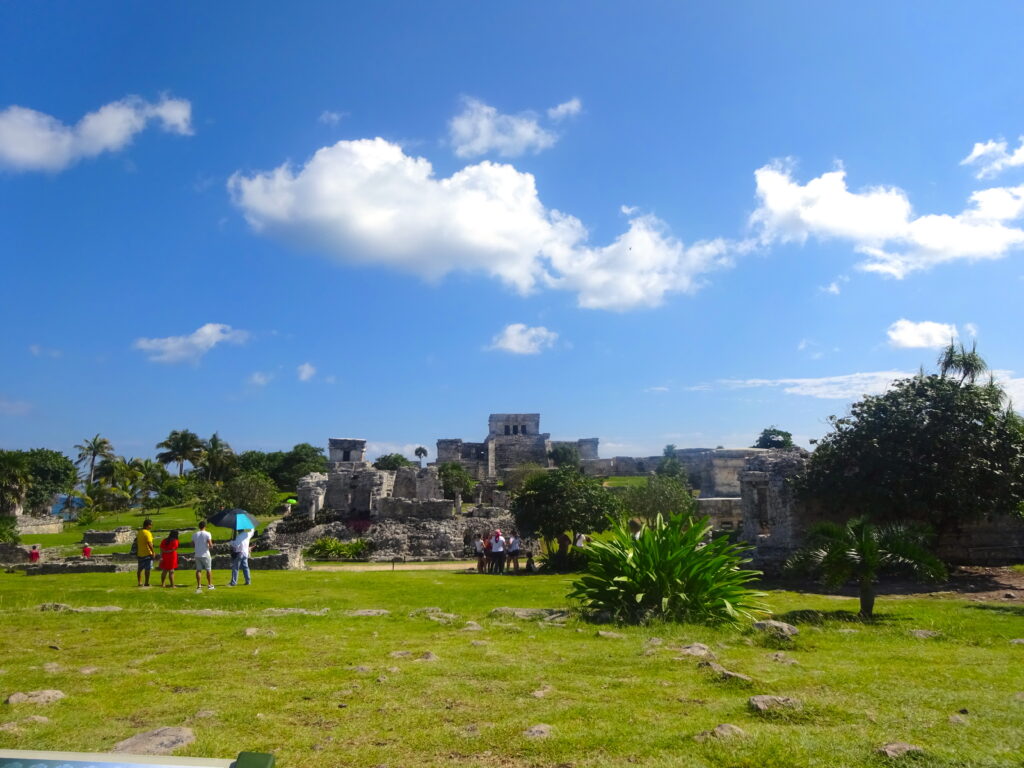 El Castillo In The Ruins Of Tulum

Like Mayan ruins? Check out my what I consider to be the Best Archeological Sites In Mexico

It is believed that Tulum was originally named “Zama”, which means “City of the Dawn”, as the city faces the sunrise. The name today of “Tulum” is the Yucatán Mayan word for “fence” or “wall”. The port is surrounded by three walls and the sea. Making it not only a port for trade but also a fort.

The ancient city of Tulum is believed to have been a trade hub, with access to both land and sea routes. It was important in the trade of obsidian, and it seems for the worship of the Diving god.

The Arrival Of The Spanish

The Spaniards first came to Tulum in 1518. When they first set eyes on the port city, they believed it to be as beautiful as Seville. However, the Spanish caused the final decline of the city. 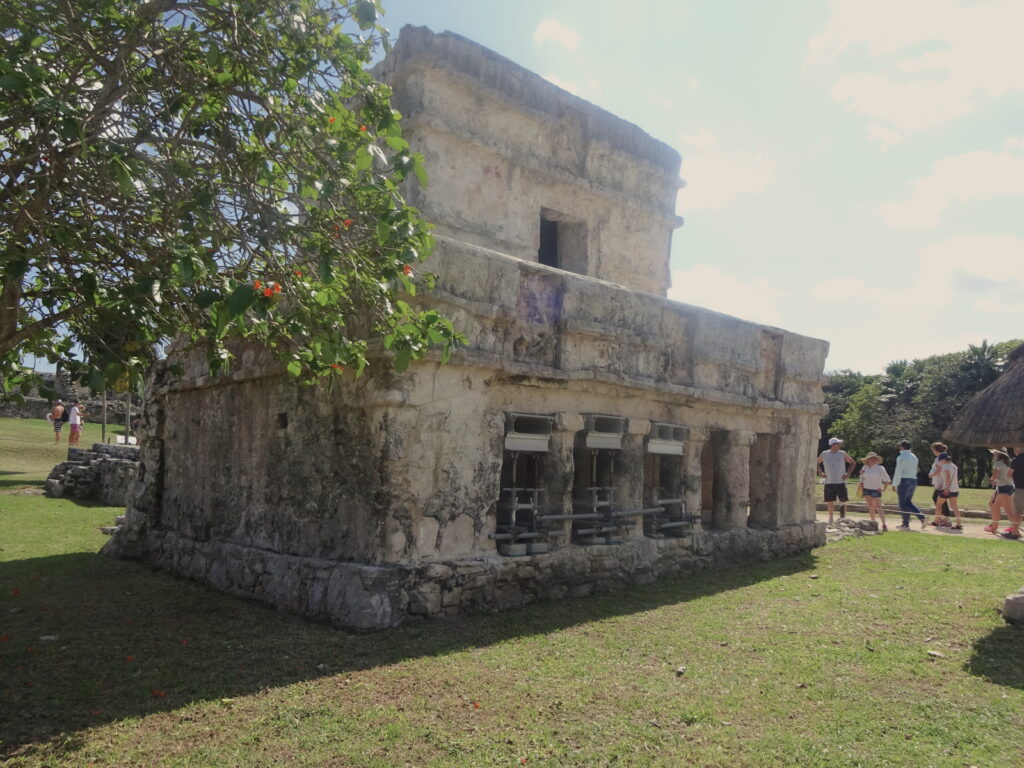 Tulum managed to survive for about 70 years after the Spanish started occupying Mexico. But unfortunately, the Old World diseases that they brought with them appeared to have caused a lot of death within this city. This caused society to be disrupted and the city was abandoned.

Visiting The Ruins Of Tulum

As the site of the Tulum ruins is compact, you can see most of it in about an hour. But if you have the time I would say to give your self extra time to explore the ruins fully at a leisurely pace. 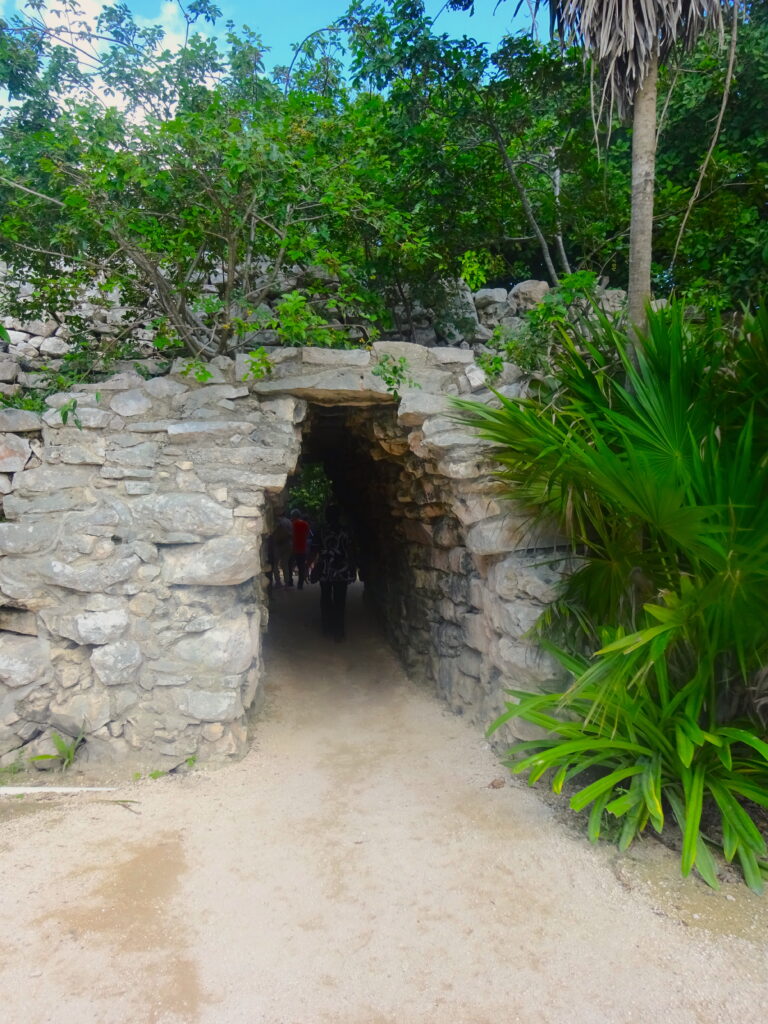 As Tulum ruins are a popular tourist spot (being the third most visited archaeological site in Mexico), I would advise you to get there either early or late to avoid the largest crowds.

There’s more than just the ruins to see at Tulum though. The site itself has a small beach where you can swim in the beautiful turquoise waters of the Caribbean Sea. It also makes a nice break if you get tired of history and ruins themselves. From the beach you can look up to the ruins, to seem them at another dramatic angle. 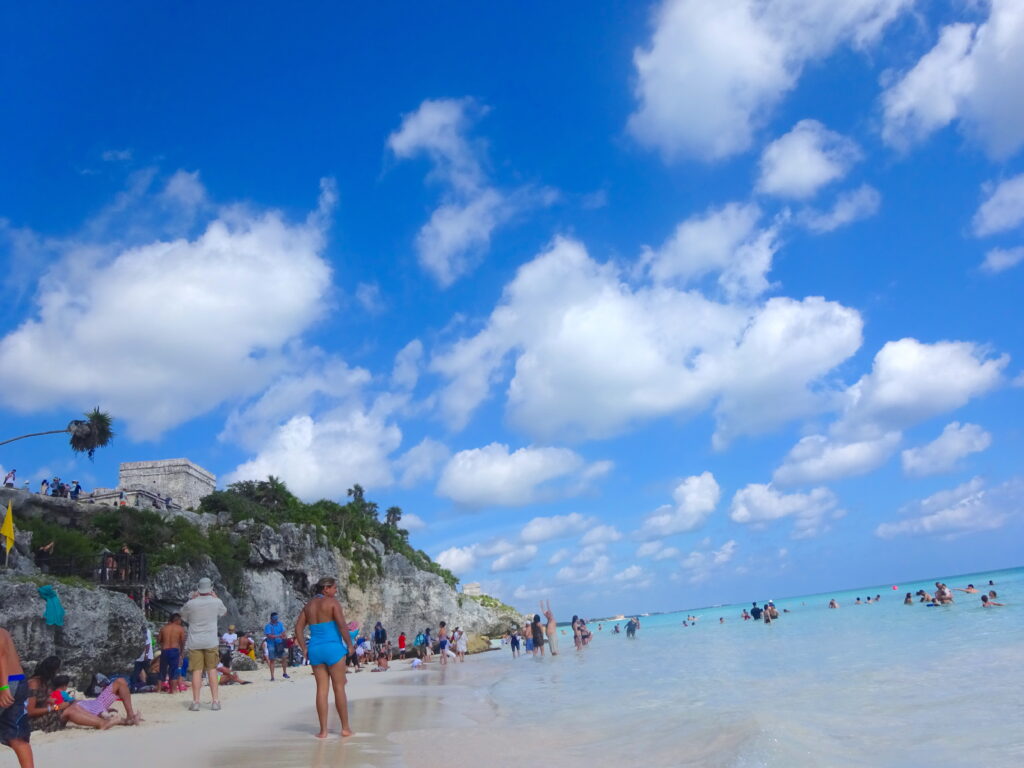 For the best view of the site, there is a small trail that leads to the cliff edges to the south. From the end of the trail, you can see the ruins and the sea, giving an incredible view of the site. 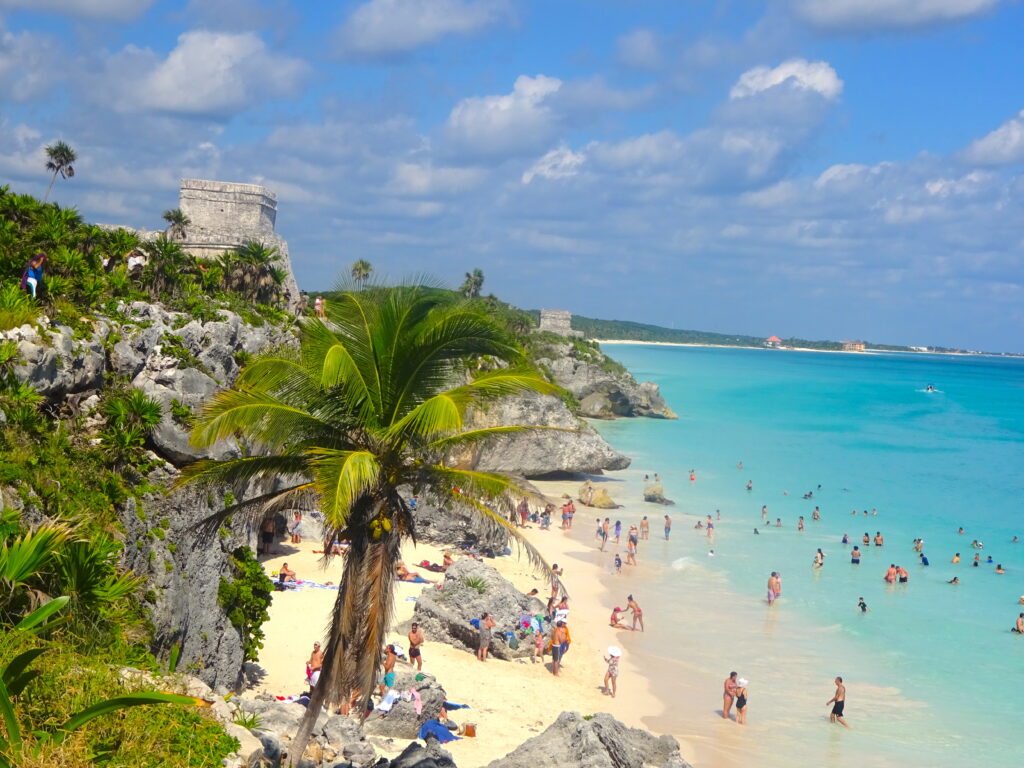 As the site is small, and one of the last Mayan sites to be built, there are not many big pyramids like at other Mayan ruins. However, there three main buildings to see. Be aware, tourists are no longer allowed to climb the pyramids at the Tulum ruins. Lots of people climbing the structures can cause damage by erosion. 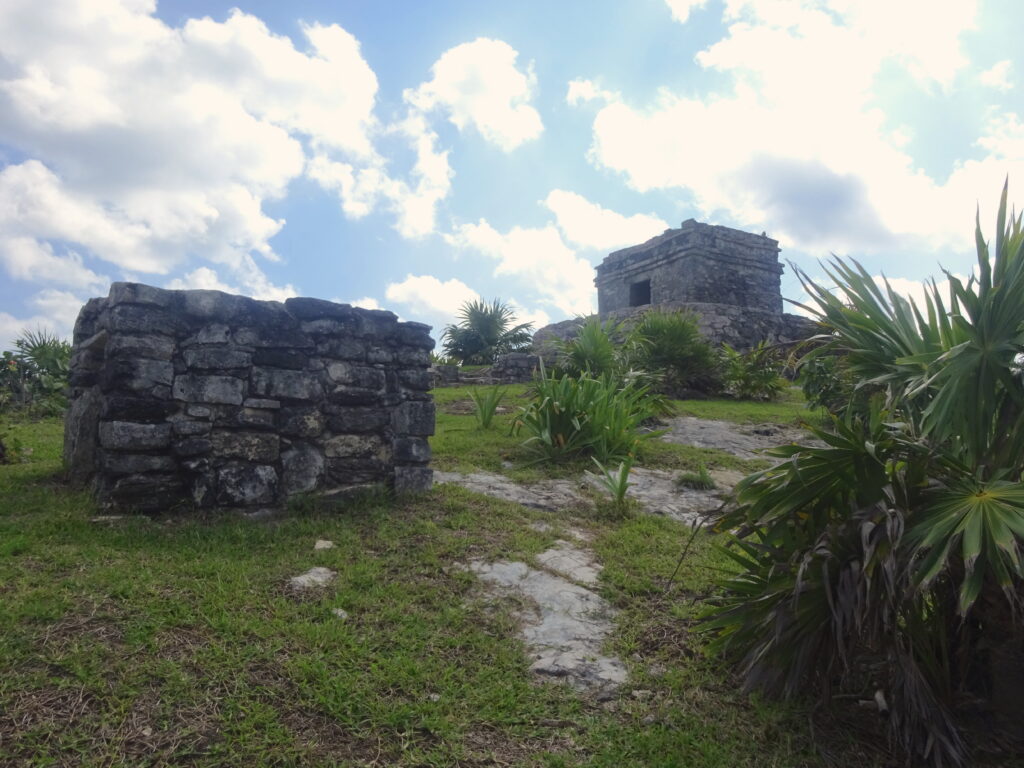 Buildings At Tulum Are Small Compared To Other Mayan Sites

The buildings here echo other post-Classic sites found along the coast. As the walls flare outward and the doorways taper in, they can look a bit chaotic, but this is an intentional design.

The first Mayan temple that you reach from the entrances to the north of the site, is Templo del Díos Descendente (Temple of the Descending God). There is a small upside-down winged figure above the narrow entrance that can be seen around the Tulum ruins but only in a few other Mayan sites.

El Castillo is found above the Tulum ruins beach and is the highest part of the site at 7.5 meters (25ft) tall. Like many Mayan pyramids, it was built on top of a previous building and was built in stages. 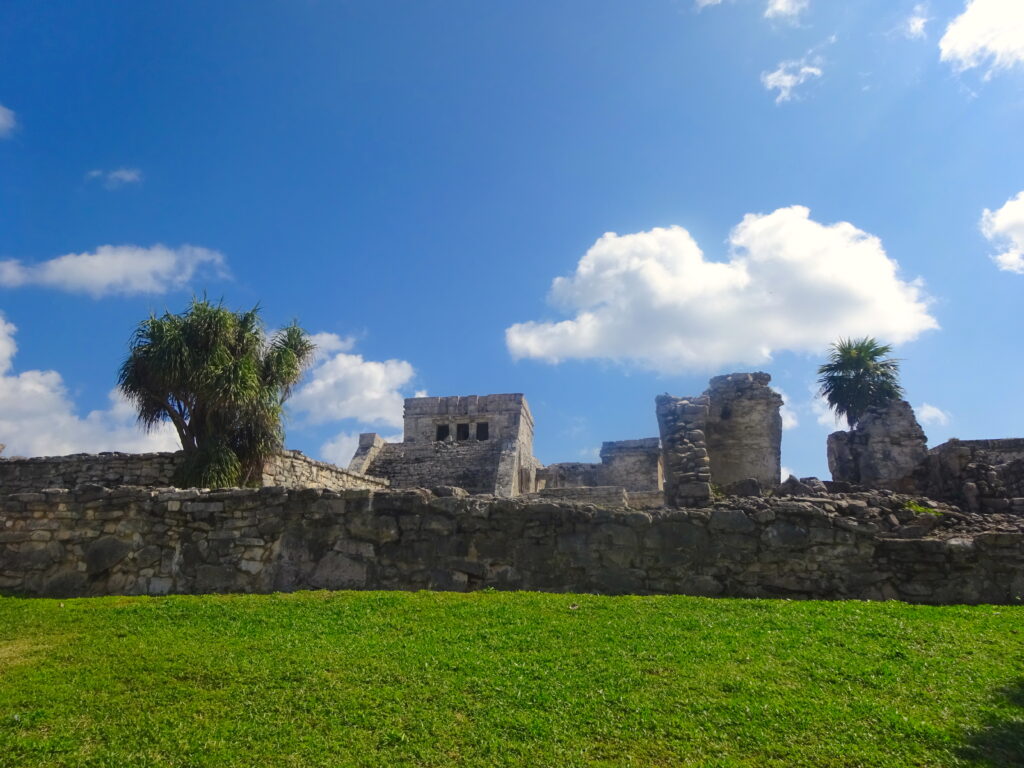 Finally, a little more “inland” is the Templo de las Pinturas (Temple of the Paintings). There are intricate carvings on the outside of the building which you have to look closely to see. This building is believed to have been an observatory for tracking the sun. Unfortunately, you are no longer able to go inside to see the frescos, but the exterior is worth seeing. 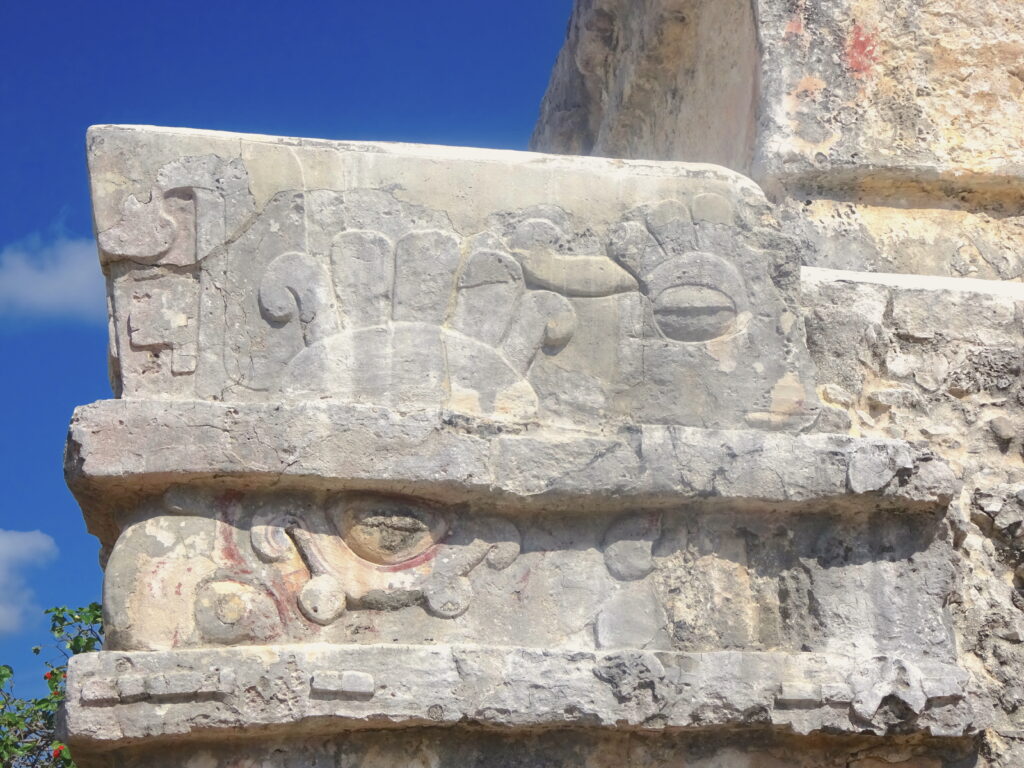 As you wander the site you’ll more than likely see a number of iguanas. These reptiles run in and out of the ruins, climb the rocks and structures, and are actually pretty confident around humans. Please do not feed them though, or touch them. They are wild animals and not tame. 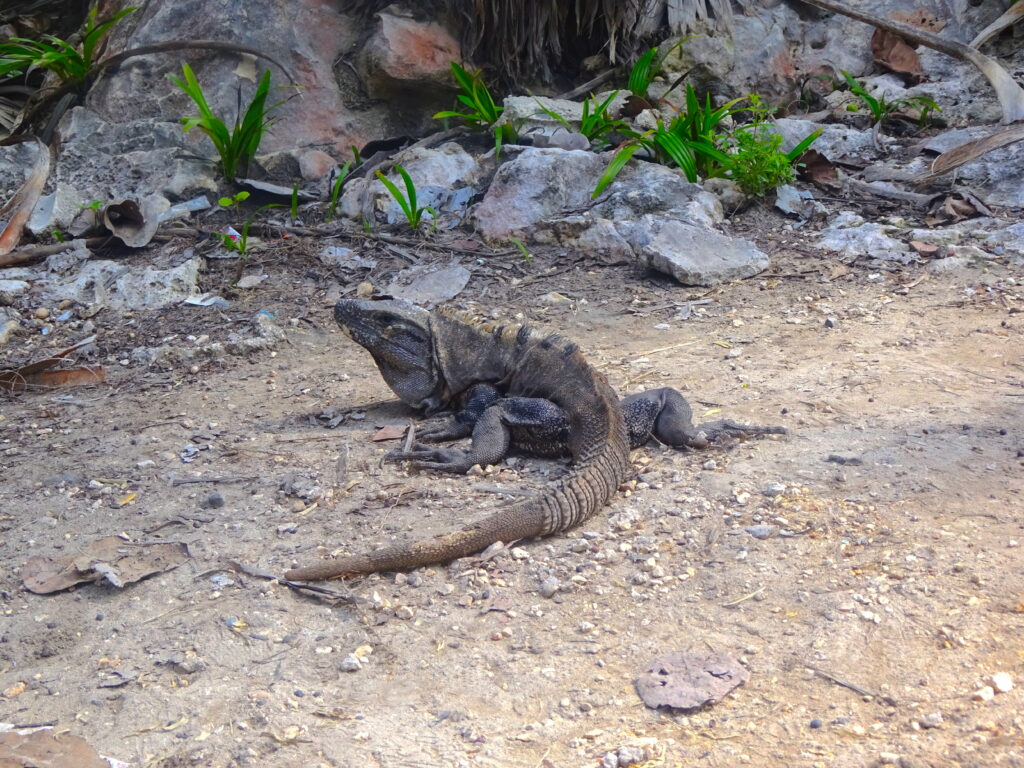 Also, be aware that there isn’t much shade at the Tulum ruins. So come prepared for heat and sun. Bring plenty of sun-cream, a hat and sunglasses. And don’t forget to bring plenty of water, preferable in a reusable bottle like the Lifesaver Liberty which also filters your water.

You’ll be walking around the site, so make sure you wear comfortable footwear. And if you want to swim at the beach don’t forget to bring your swimwear!

Remember, tourists are not allowed to climb the structures at Tulum. 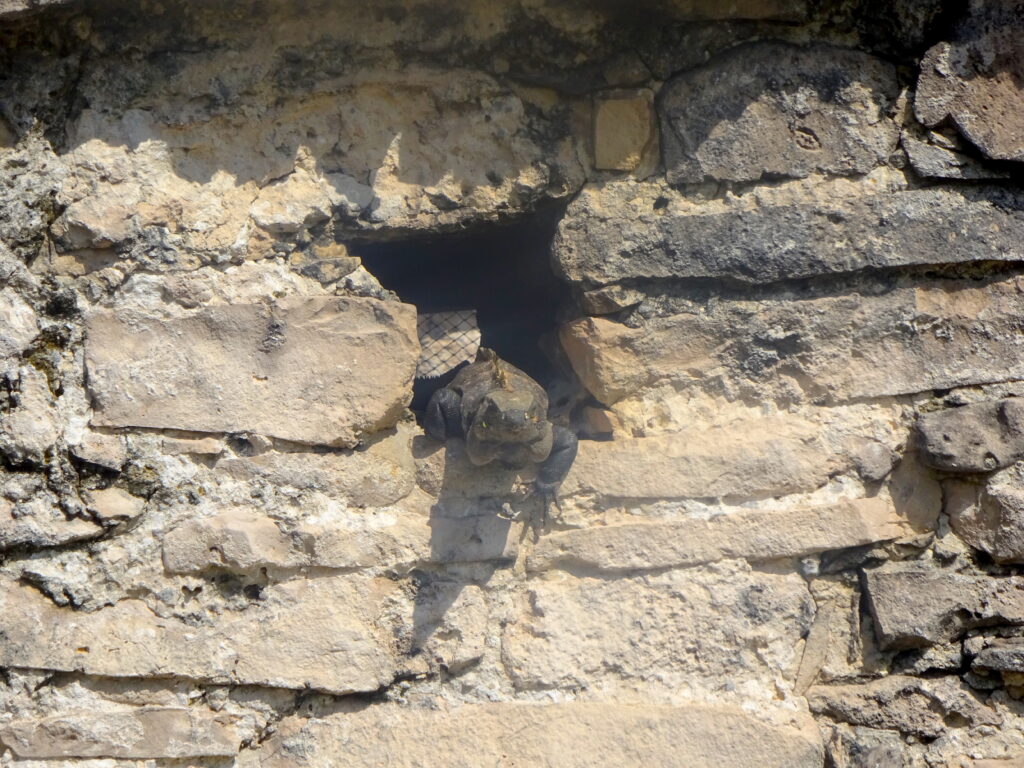 The Iguanas Can Climb Where They Want, But Tourists Can’t Climb The Pyramids At Tulum

How To Get To The Ruins Of Tulum

As Tulum ruins are a popular tourist spot, it’s pretty easy to get to. The ruins can be easily reached from Cancún and Playa del Carmen. Alternatively, you can stay in the town of Tulum. You can either take a tour or get there yourself. Where you stay and how you get to the ruins depends on your itinerary and preferences.

Being such a picturesque Mayan ruin, there are plenty of tours that include a visit to Tulum. From Cancún and Play del Carmen, you’ll have plenty to choose from. These three tours include time at the site of the Tulum ruins:

Tulum and Dos Ojos Cenotes: This five hour guided tour can pick up at several locations. You will have a guided tour of Tulum, plus some free time, after which you’ll stop off for a swim at the famous Dos Ojos Cenote. This tour is with an eco-certified company.

Riviera Maya Full-Day Tour: Tulum Ruins, Snorkeling & Cenote: On this full-day tour you will visit a wet and a dry cenote, snorkel through coral reefs, and visit the ruins of Tulum. With a guided tour around the ruins, you will learn lots of history and about the Mayan culture before heading to the swim spots.

Tulum Discovery Private Tour: Why not treat yourself to a fully private tour of the Tulum area? You will learn about the ruins of Tulum on a private guided tour of the site, so you will leave with an in-depth understanding of the site. After which you will be taken to the underground world of Cenote Sac Actun, where you will discover amazing halls and chambers, and interesting rock formations. 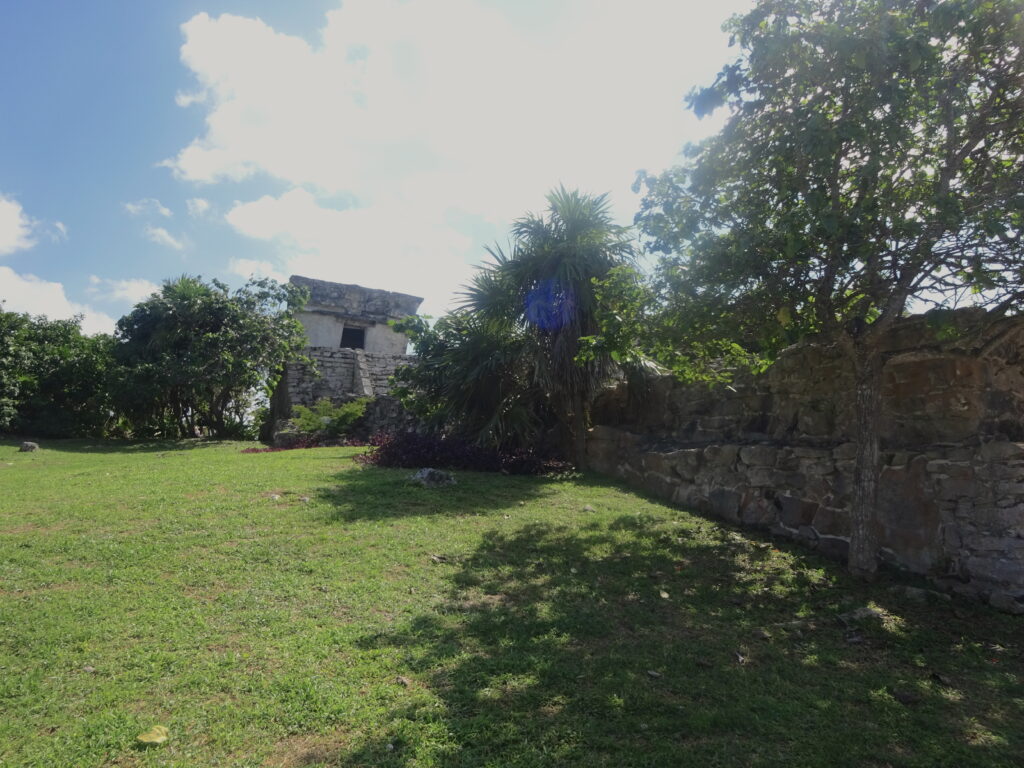 The Ruins Are Small, But Worth Seeing

Exploring The Tulum Ruins Without A Tour

It’s also pretty easy to get to the ruins of Tulum without a tour, and you have a few options. If you hire a car, you can get to the ruins by following the highway 307 south from Cancún and Playa del Carmen. The ruins are just off the highway before you reach the town of Tulum, so you can’t really miss them. From Cancún (which further than Playa del Carmen), it should take about 2 hours, depending on traffic, and is 73 miles (118 km) away.

If you are not driving, you can still easily get to the ruins. There are regular ADO buses to the town of Tulum from all over the Yucatán peninsula, including Cancún, Merida and Valladolid, and further afield. From the town, you can either get a taxi, colectivo or rent a bike to get to the ruins.

There are also colectivos available to Tulum from Playa del Carmen.

What’s a colectivo? Find out in my Mexico Travel Tips

Personally, I would say there’s plenty to do in and around the town of Tulum. So it’s worth staying there for a few nights. I stayed in the Weary Traveller, which was an awesome hostel. 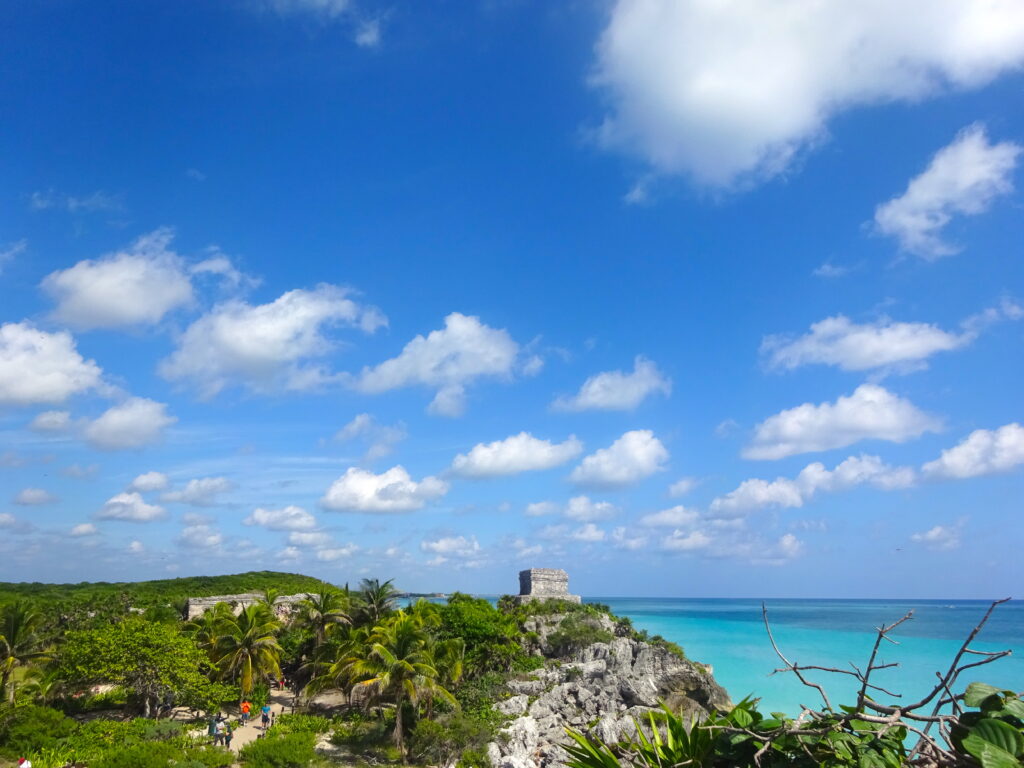 El Castillo Looks Out Over The Sea

If you stay in the town of Tulum you can get to the ruins by taxi or colectivo. Personally, I would recommend hiring a bike, as it is a nice ride to the ruins from the town. There are plenty of places to rent bikes from. The Weary Traveller Hostel also has a tourist centre where you can rent bikes.

If you plan on staying at Tulum you can stay either the town or along the beach. Check out nearby hostels on Hostelworld. 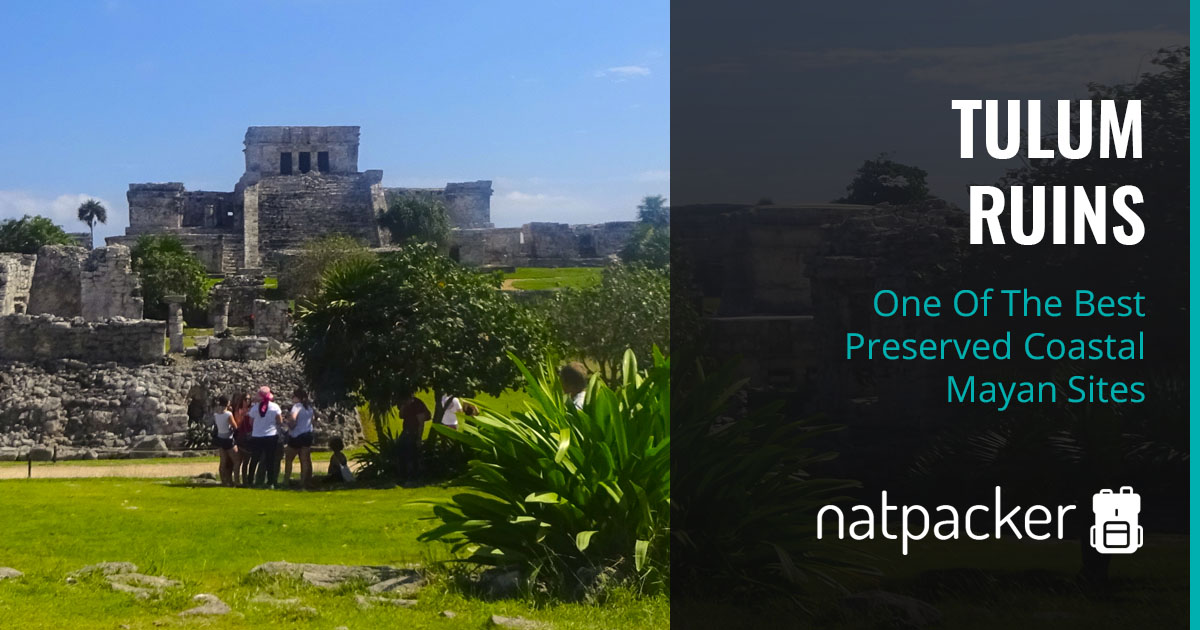