In the Calakmul Biosphere Reserve, you will find the ruins of an ancient Mayan city. As Yucatan pyramids go, those at Calakmul are among the most impressive. Hidden in the heart of the jungle, they are not the easiest to get to, but definitely worth the trek.

The remote location of these ruins means it’s a long drive from any town. Found in the Mexican state of Campeche, on the Yucatan Peninsula, just 22 miles (35km) from the Guatemalan border.

Calakmul ruins are huge. They are thought to be the largest archaeological site in Mesoamerica, and although they are only partially restored they are certainly impressive. The Calakmul Biosphere Reserve has been a UNESCO site since 2002, due to the ruins and the jungle itself.

Read my Top UNESCO Sites in Mexico for more inspiration on where to visit (yes, Calakmul is one of my favourites)

The History Of Calakmul

The ruins of Calakmul were once a very important city. In fact, it is believed to have been one of the most powerful in the Mayan lowlands. It is also thought to have been the capital city of the area and part of the Kaan Dynasty.

There’s no doubt that Calakmul was an important city; there are sacbé (Mayan roads) that link this city to El Mirador, Nakbe and Tintal. These links may have begun in the Preclassic period and suggest strong political links. El Mirador was also an important city in this area.

However, like most large Mayan cities in the area, Calakmul was abandoned by about 900 AD. This is during the Classic Maya Collapse. 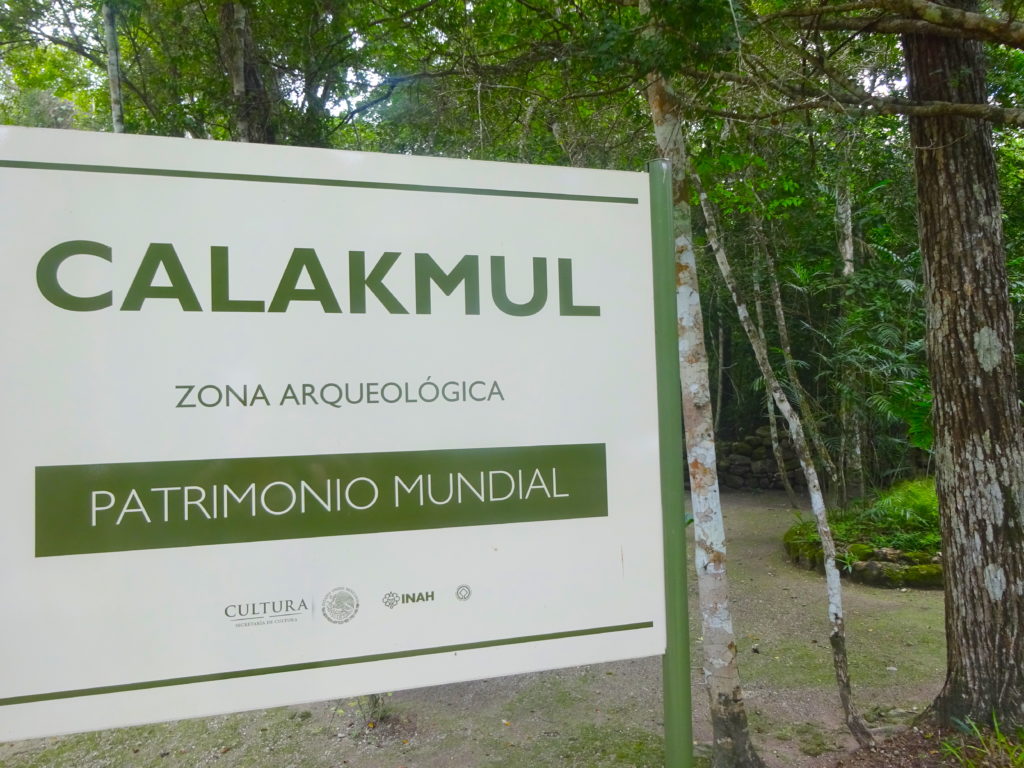 The City Of Calakmul Was A SuperpowerOf The Mayans

The Mayan Classic Period is heavily dominated by the rivalry between Calakmul and Tikal. This was a struggle between two Maya “superpowers”.

Tikal was another large Mayan city that was dominating much of the area. Calakmul had equivalent resources and so challenged Tikals supremacy. Though it is believed that the rivalry wasn’t just to do with resources. Both cities have different origins and so their rivalry may have had an ideological element.

Although Calakmul never fully defeated Tikal, they had the upper hand from the second half of the 6th century AD until the late 7th century AD. However, the tables were turned in a decisive battle in the year 695 AD.

Though the true winner was never really decided. Tikal, like Calakmul, was abandoned during the Classic Maya collapse.

It was in 1931 that Calakmul was first reported, by an American botanist Cyrus Lundell. Excavations of the site began in the 1980s, though even now it is only partially restored. Calakmul is now a large-scale project of the National Institute of Anthropology and History.

The excavations have uncovered a small amount of the buildings of Calakmul; the rest of the ruins are earthen mounds. Pyramids, steles and carvings have been uncovered, but nowhere near the full amount. A number of ancient treasures have also been found here, inside the pyramids. 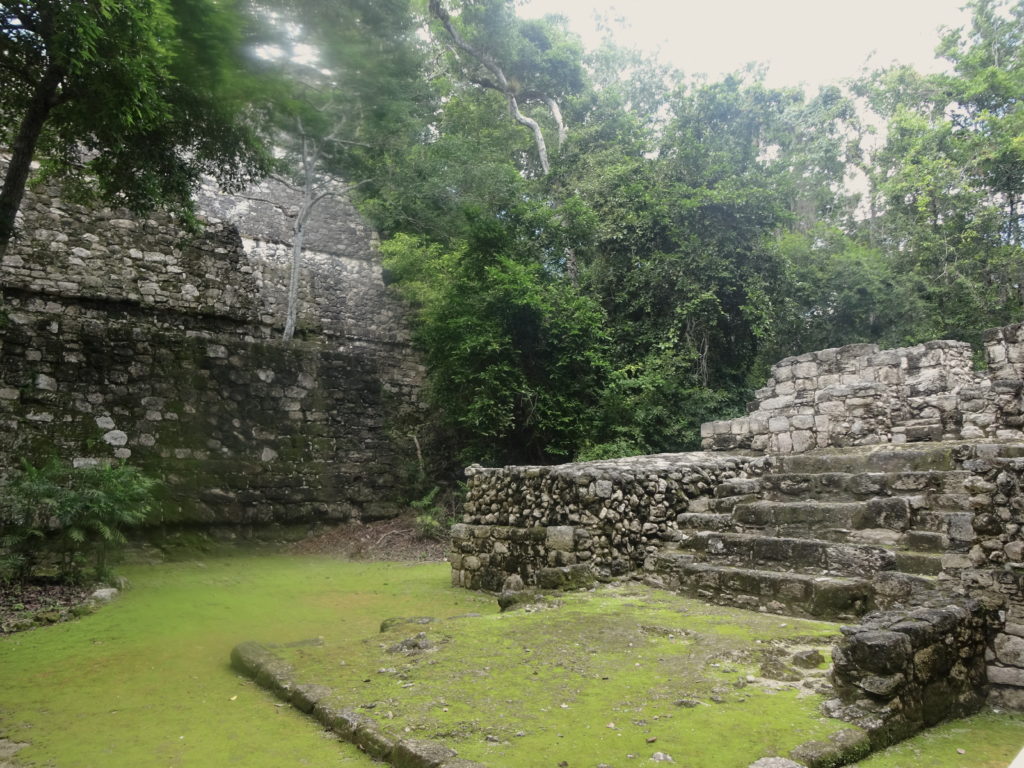 The ruins of Calakmul are awe-inspiring. It is a large site with a lot to see. Here are some facts about the site:

When visiting the Calakmul Biosphere Reserve (for reviews, click here) there are three distinct areas you may want to see. First, there is the museum, which I definitely advise visiting so you can learn about the area. You may also want to do a jungle walk (though I would advise to only do this if you have a guide). Then, of course, there are the ruins themselves.

Not far from the entrance to the Calakmul Biosphere Reserve, on the road to the ruins themselves, is the Calakmul Museum (Museo de la Naturaleza y Arqueología de Calakmul). You should definitely explore this small museum before you head to the ruins. 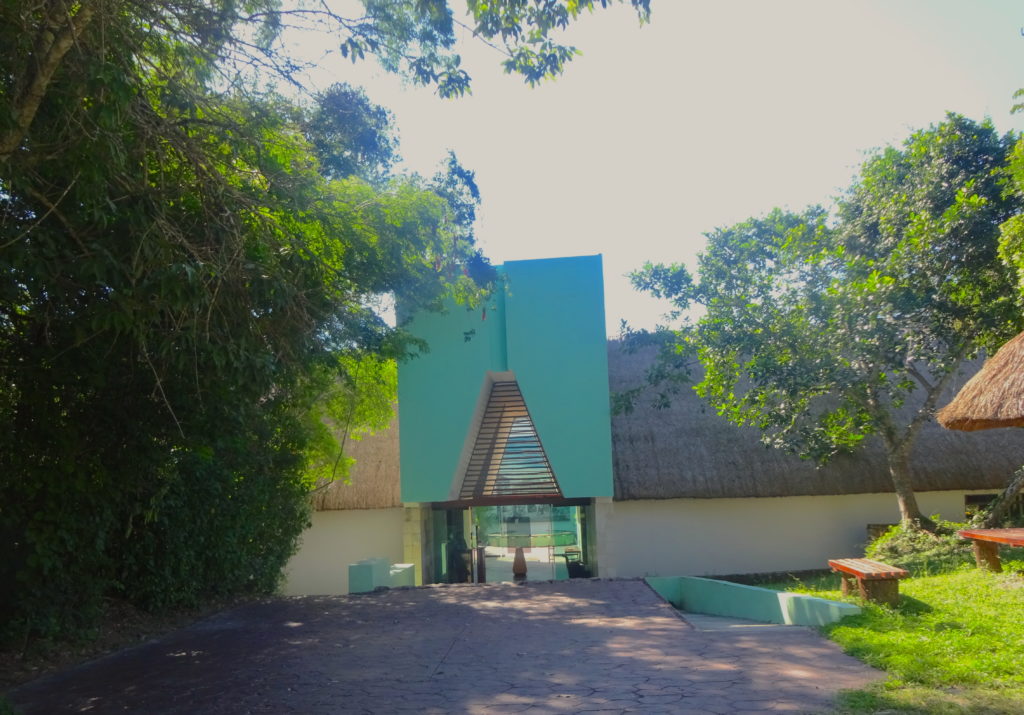 The Entrance To Calakmul Museum

In the second part of the museum, the focus is on the Calakmul ruins. There are small replicas of the pyramids and information on Mayan culture. For instance, you can learn about the importance of the Jaguar to the Mayans. There’s also bits about death in Mayan culture and the symbology surrounding this life stage. 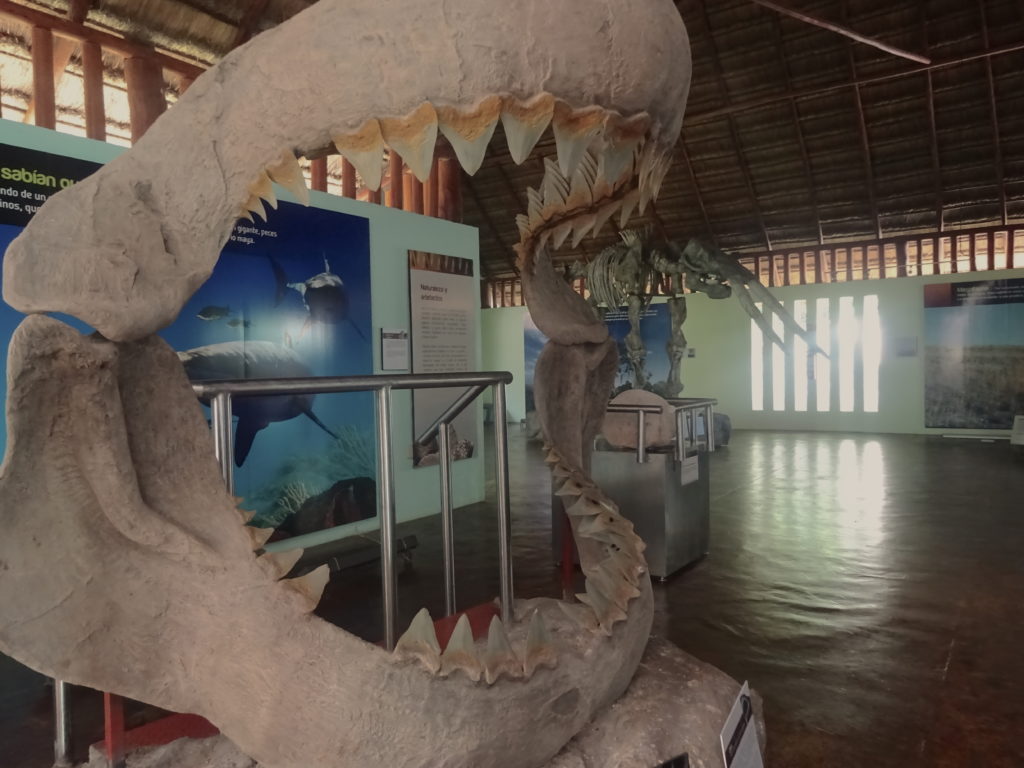 Huge Shark Mouth In The Museum

The Jungle Of Calakmul Biosphere Reserve

If you have a guide I would definitely recommend doing a jungle walk (most tours will include this). The jungle in the reserve is a mature tropical forest and contains rich biodiversity. As it was developed under particular seasonal dry conditions it contains critical habitats, which are important for many endemic and threatened species. The ecosystems found here are the product of environmental influences and the management practices of the Mayans. 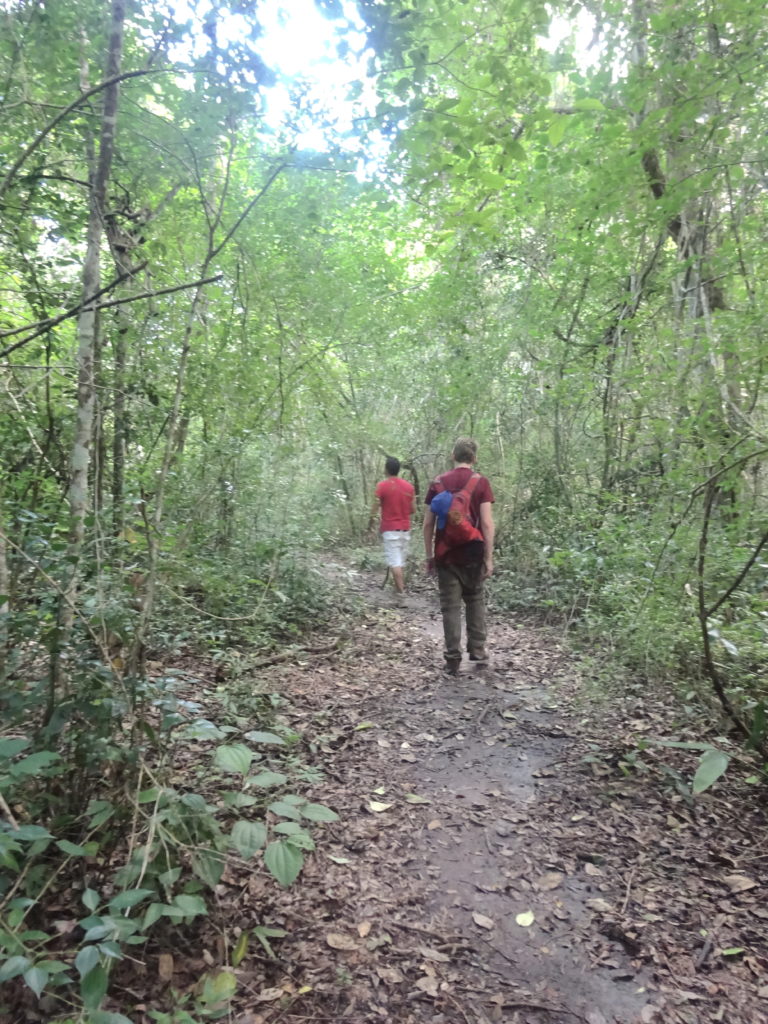 Walking Through The Jungle

The Calakmul Biosphere Reserve is contained in the second-largest tropical forest in America. Only the Amazon is larger. It is also one of the best conserved.

Wildlife Of The Jungle

In the forest, there is a lot of different wildlife. The reserve has the highest abundance of wildlife and diversity of mammals in the Mayan region. Living in the forest are two out of three primates found in the region and five out of six feline species found in the region, including the jaguar. This reserve has one of the largest populations of jaguars found in Central America, though you will have to be very lucky to see one. Though you probably will see some wildlife in the forest (you can also see some at the ruins). You may see monkey, turkeys and even crocodiles. 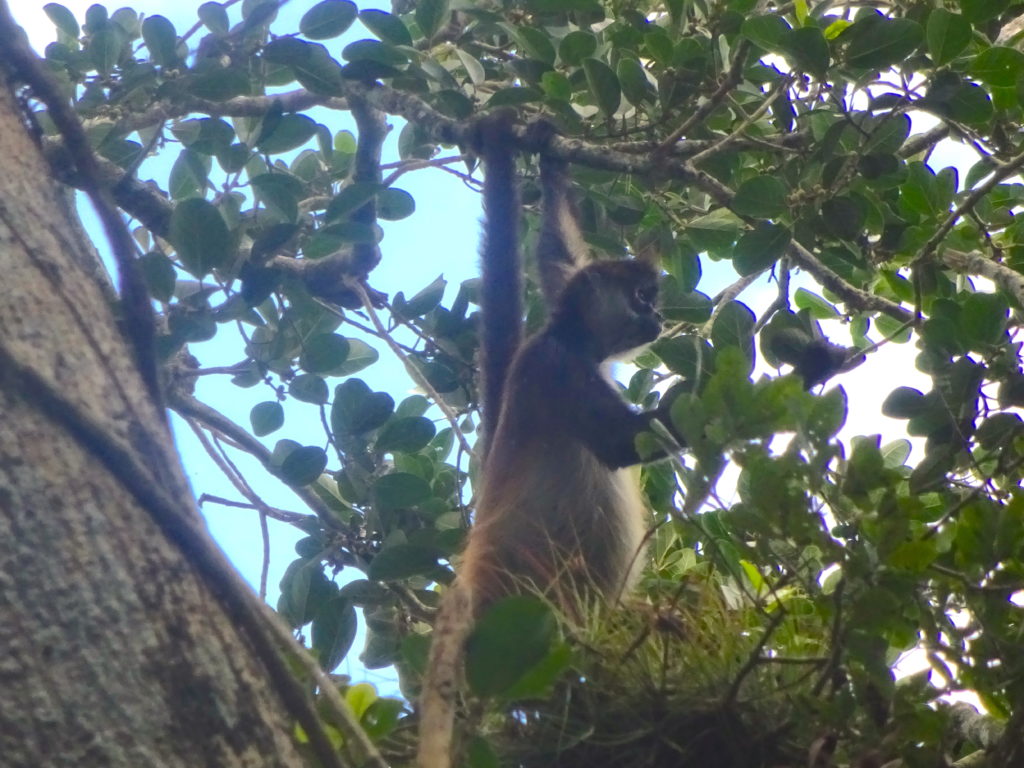 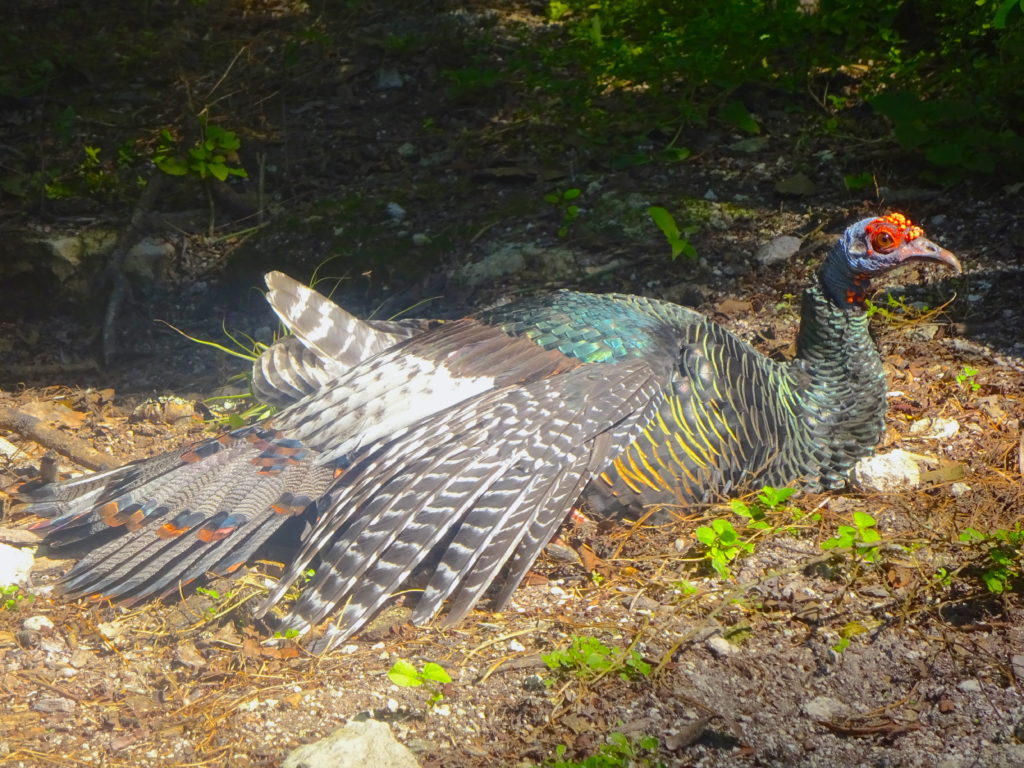 Another interesting point of interest is two tree species. One tree is red, one is white and they are always found growing next to each other, or at least extremely close. These trees are chechém (the red tree) and chaka (the white tree). An interesting point about these trees is that the red one is poisonous and the white tree holds the cure. Naturally, there is a great Mayan myth to go with these trees.

The myth goes that with the trees is that two brothers, with differing personalities, fell in love with a princess. Like in all stories, they couldn’t just ask the princess who she preferred, but instead, choose the sensible option of fighting. Each killed the other and they died in each others arms. The gods then reincarnated them into the trees so that they will never be separated. 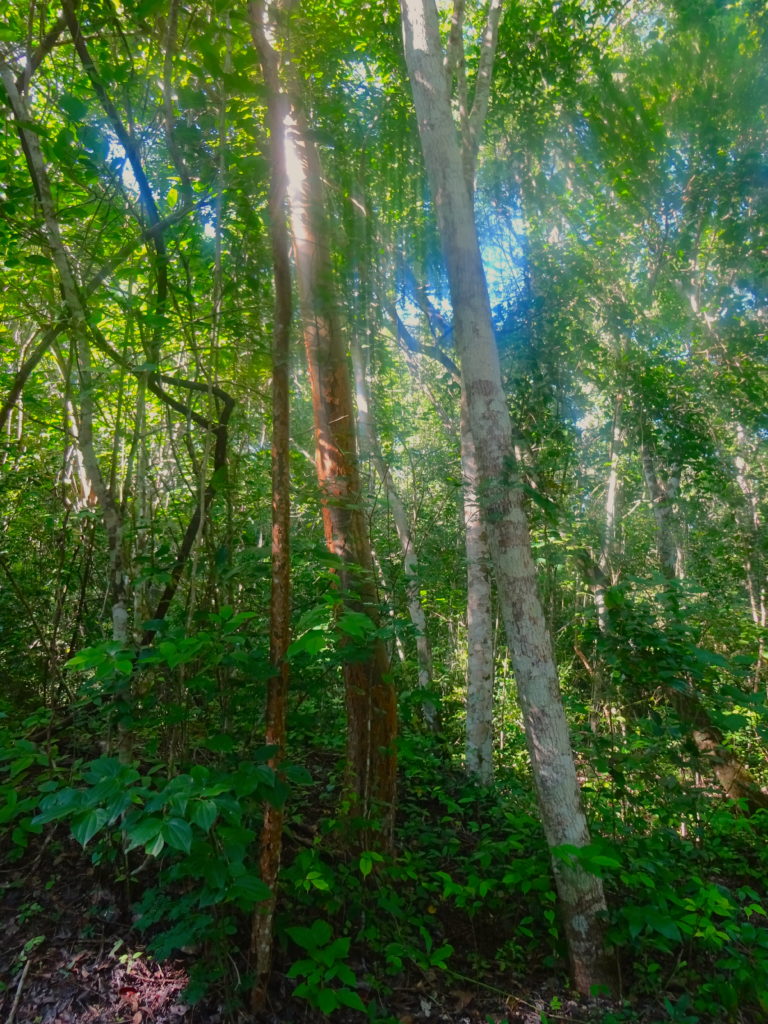 The parts of the ruins that you can visit are pretty big! Though you can not visit the whole of the site (as I’ve said, it’s massive), there’s still plenty to see. You want to budget about four hours for a decent exploration of the site. But if you’re like me and like to read every sign and climb every pyramid, you’ll want more time. Parts you may want to see are the main pyramids, the observatory, residential area and the ballcourt. Also, make sure you have a look at a few steles. Stela 66 (which shows a ball game player) and stela 88 (which shows and important Mayan Queen) are worth seeking out if you have the time. 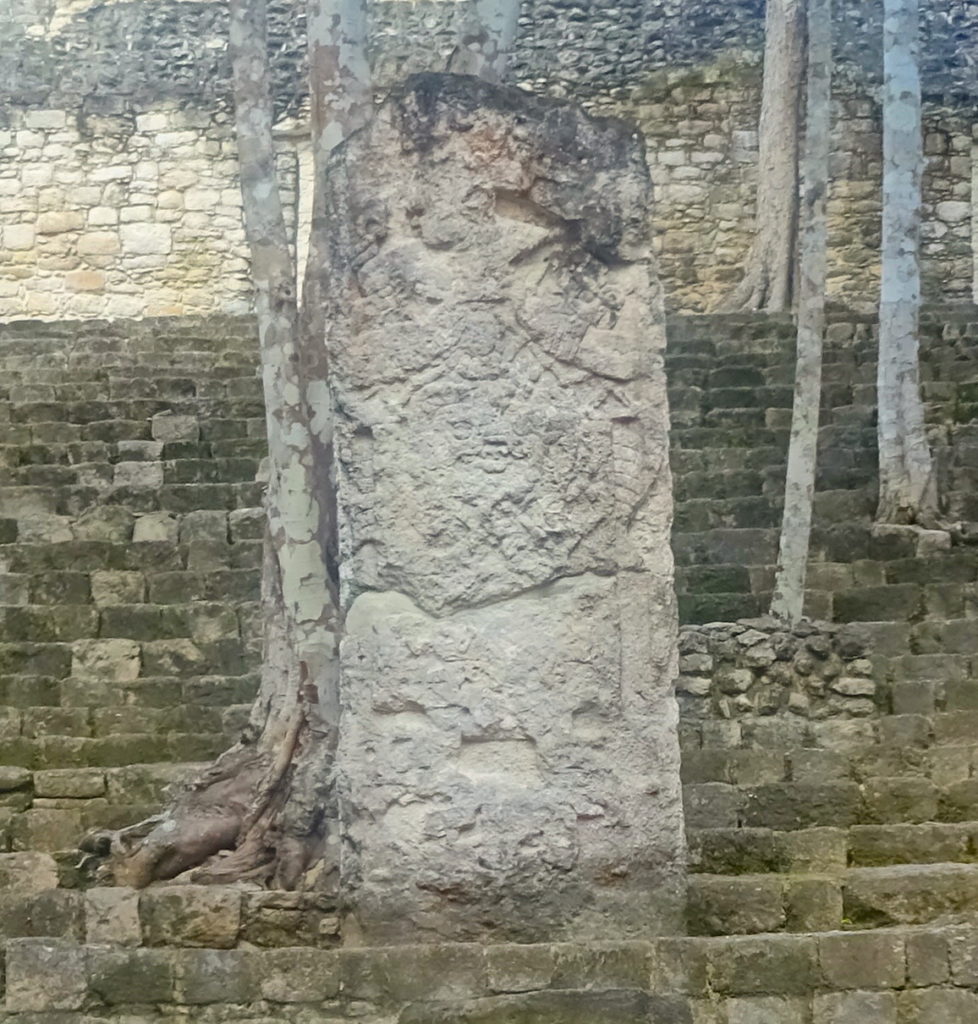 Structures To See In Calakmul

Structure I is on a platform and so looks like the tallest. This is one of the pyramids that you can climb and it is worth it. Near the top, there is a yellow stone that reflects the sun at certain times of the day. You can also see the Great Pyramid from here.

The Great Pyramid is Structure II and also worth climbing. From here you can see over to Structure I and even spot the yellow rock I just mentioned. On a good day, it is even possible to glimpse the tip of the Danta Pyramid in El Mirador, which is in Guatemala. 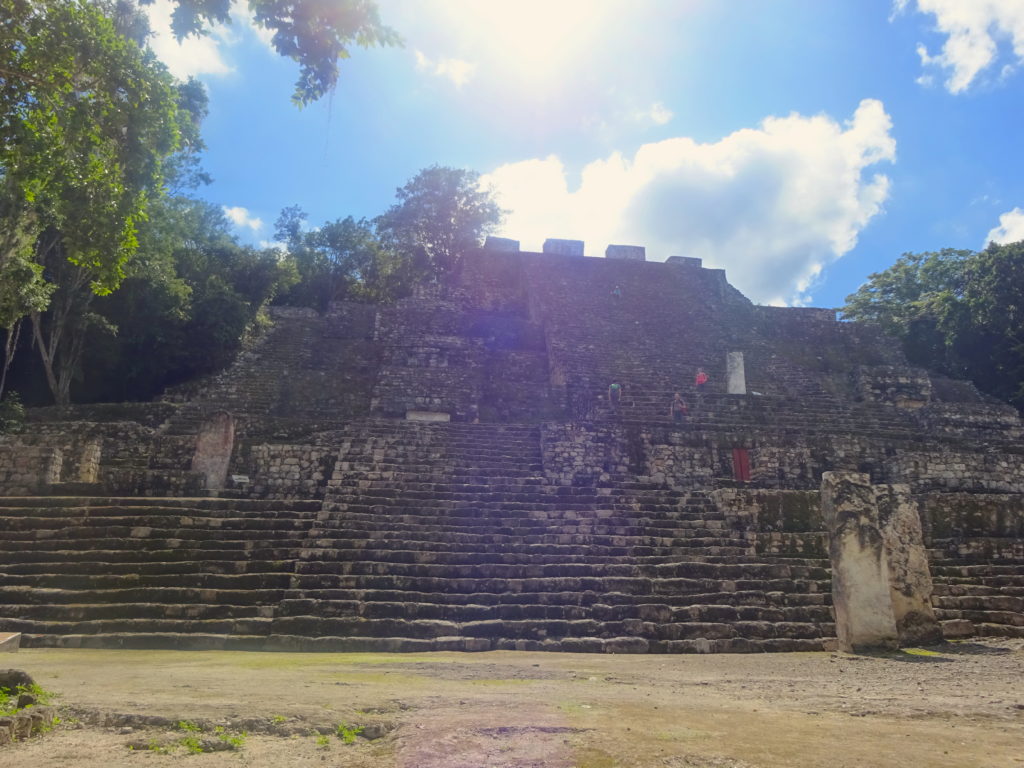 The Great Pyramid Of Calakmul

You definitely want to climb at least one of these pyramids. The views from the top are incredible. You see the other structures poking out from a sea of green leaves. It really drives home just how remote the area is. 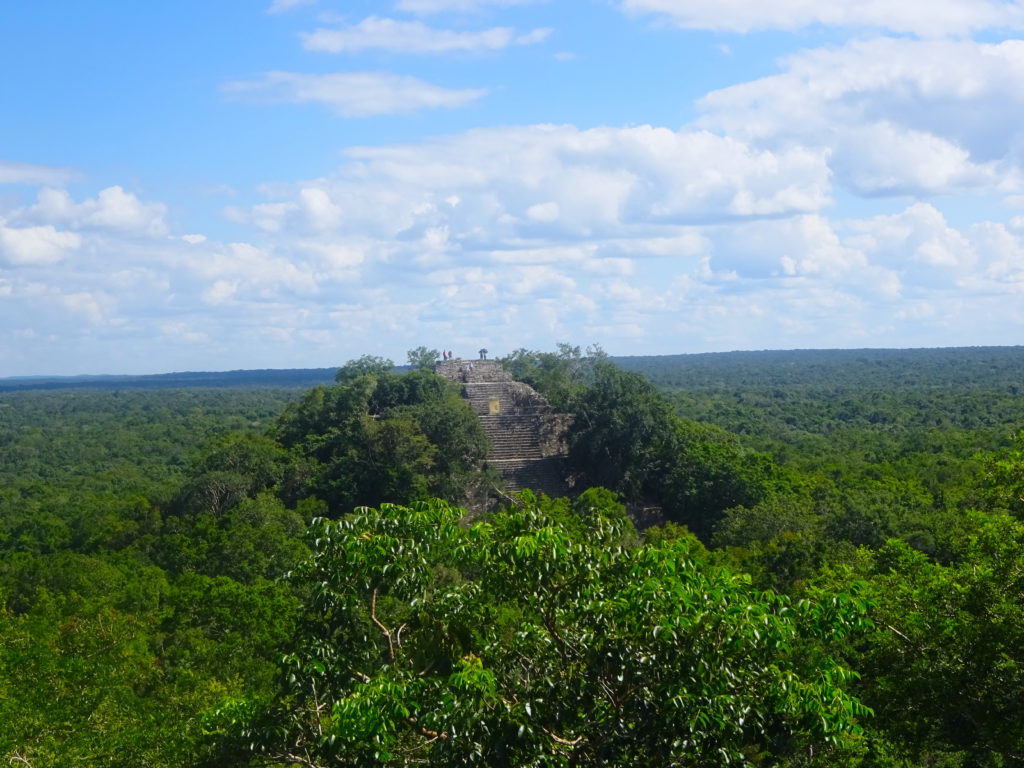 View Of Structure I from The Great Pyramid

One other point of interest that you should see if you have time is the rocky outcrop in the Chan Chi’ich area. This outcrop has some cool carvings of gods on it. You can see the god of rain (Chaak) and the god of the sun (K’inich). There is also a carving of a jaguar. Unfortunately, the hieroglyphs can not be read, so the significance of this outcrop is unknown, but it’s still worth seeing. 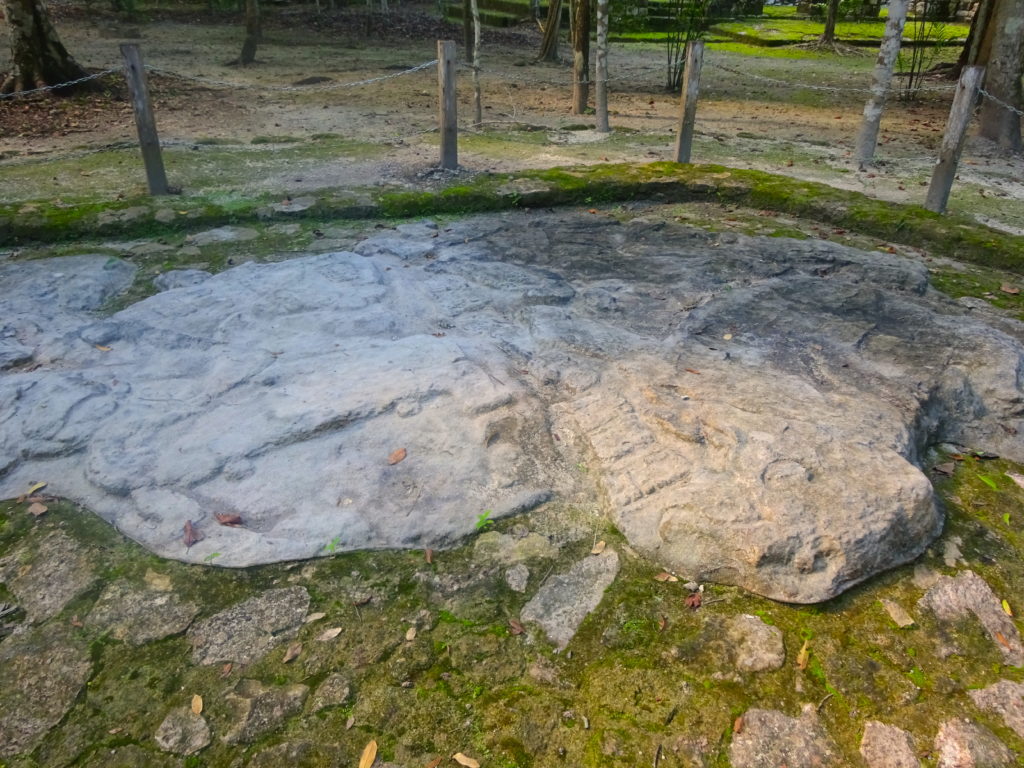 How To Get To Calakmul

You can not get to Calakmul on public transport, therefore you have three choices. Hire a car or use a tour company. The nearest cities are Campeche or Chetumal/Bacalar.

If you want to hire a car and drive yourself, you are best to leave from either Campeche or Chetumal. From either of these cities get on Highway 186 (which connects the two). Midway between Escárcega and Xpujil, there is a signposted road that will lead you to Calakmul. Though I would recommend staying in either of these two little villages the night before you visit the ruins so that you can get to the site early without a long drive.

If you want to get there on your own, but don’t want to hire a car, visiting is still possible. You can get the bus to Xpujil from Chetumal, stay the night and hire a taxi to Calakmul the next day, with the option of getting a late bus back to Chetumal. Doing it this way you can potentially fit in more ruins of the Río Bec sites. Though a word of advice – go to the taxis direct rather than booking through your hotel; you’ll get a better rate. This will also take a lot of planning!

Your third choice is to take a tour from various cities in the Yucatan Peninsula. Most commonly, tours are from Chetumal or Campeche.

Personally, I recommend going with Bacalar Adventure Tours from Chetumal. I saw plenty of the site, didn’t have to worry about the long drive and our guide ensured we learnt a lot. We also got to see a Bat Volcano on the tour too!

I did the Calakmul Full Jungle Adventure with Bacalar Adventure Tours, from Chetumal had a great time. I fully recommend this company, our guide was friendly and knowledgeable, it was easily one of the best tours we did in Mexico.

You can read about my time on this tour and more in My Adventures from Calakmul.

Alternatively, you can take a tour with Get Your Guide. 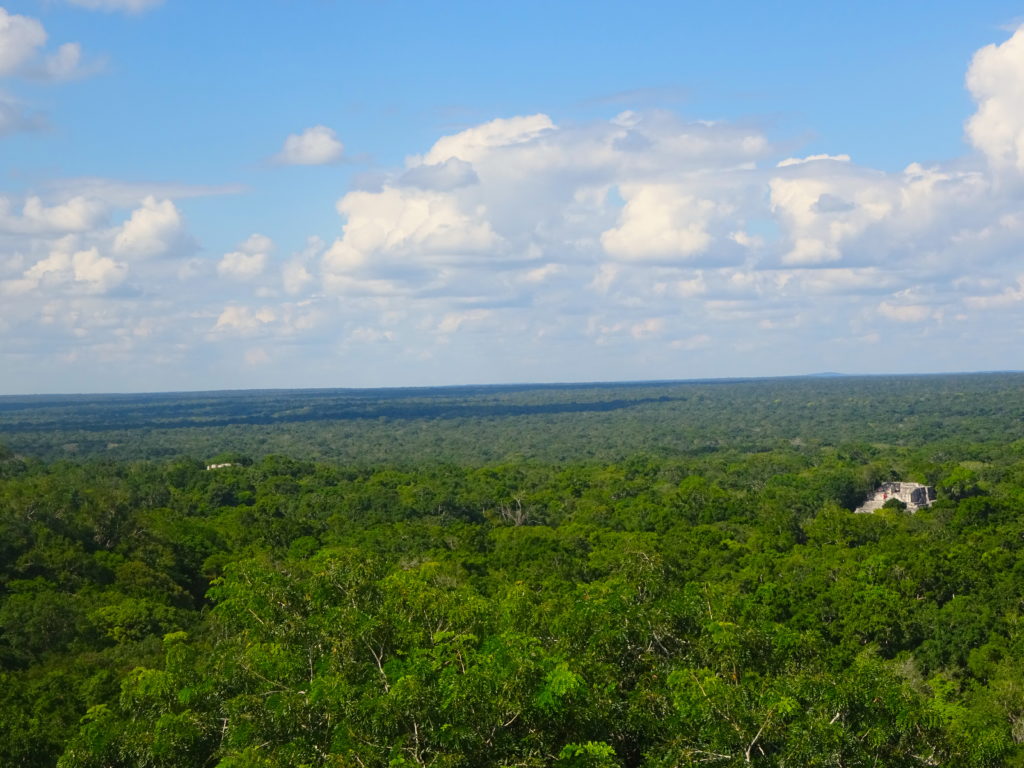 However you get there, it will likely be a long day. But visiting Calakmul is definitely worth it. It was one of the quietest archaeological sites I visited and the sheer size of the site is awe-inspiring. It is a beautiful gem hidden deep in the jungle.

If you want to visit Calakmul, I would say base yourself in Chetumal. You can check out hostels on HostelWorld. 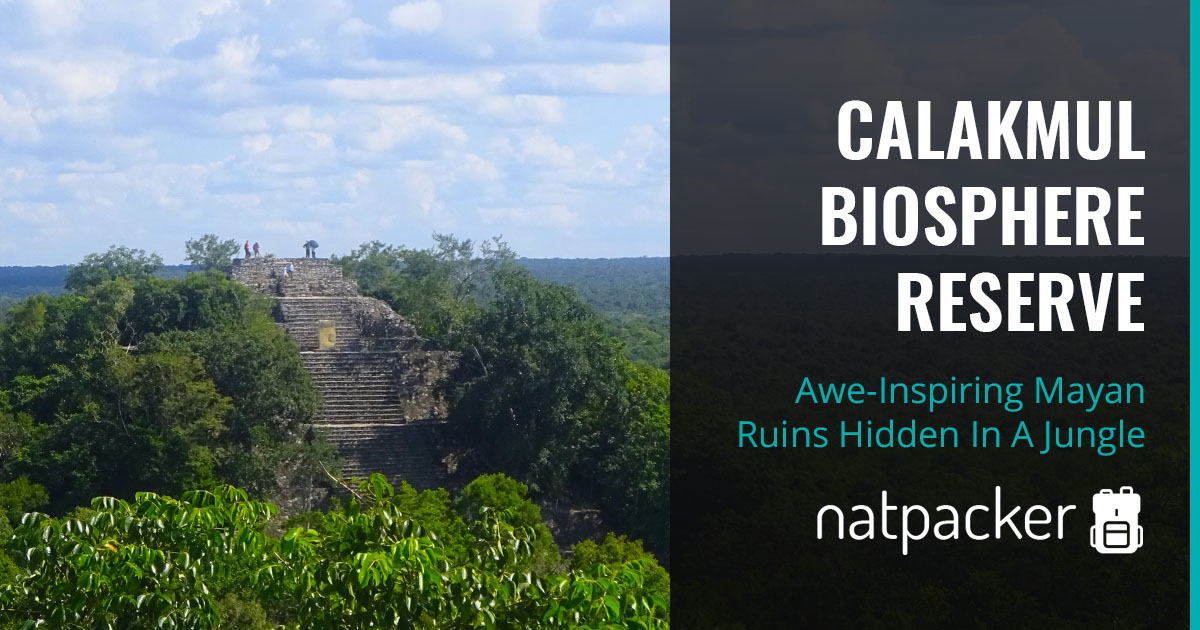