Not far from Kraków, a little over forty miles (70km) to the west, is a little town called Oświȩcim. This little town would probably be overlooked by tourists if it weren’t for its dark history. For it is in this little town that you will find Auschwitz Concentration Camp and Auschwitz-Birkenau.

Disclaimer: Due to the sensitive nature of this post, please be aware some of what follows will be my opinion. It is hard to go to Auschwitz and not be affected, and it is even harder to write about. It is not my intention to offend anyone with my opinions. However, if you feel that I have the wrong end of the stick, please leave me a comment and I will look into it.

This infamous concentration camp of Poland, in my mind, should be visited by everyone. Not as a “bucket-list” item, but as a lesson. This place of dark tourism is a very important part of European history. Therefore, it needs to be remembered and seen to fully understand the horror of the Holocaust. To see the evil side of human nature, the dangers of an isolationist policy, the dangers of blaming a minority for your own situation, and the dangers of propaganda, Auschwitz drives these lessons home.

Nothing can prepare you for visiting, you can read and read how it affects people and how horrifying the place is. You may even look at images, but to see it in person is something else. Even now, as I write about it a few years after visiting I am experiencing a tidal wave of emotions that I can not explain. But that doesn’t mean you shouldn’t visit Auschwitz, on the contrary. Just be aware that a visit is likely to break your heart. 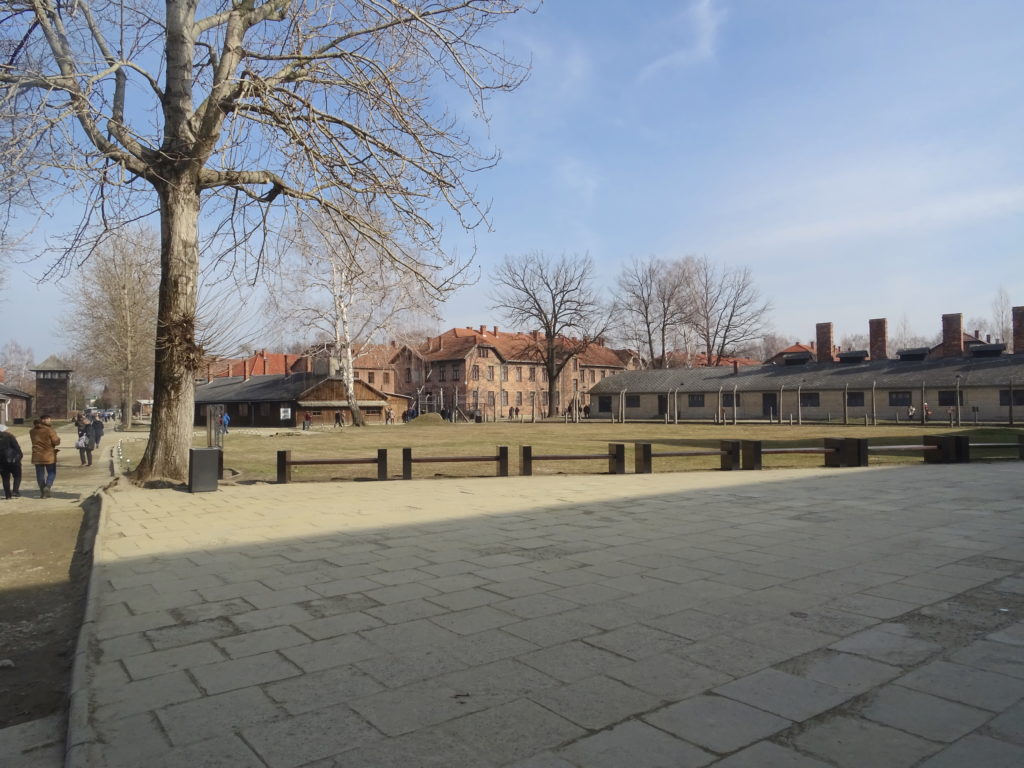 The View Of The Camp

A Brief History Of Auschwitz

The building of Auschwitz concentration camp began in April of 1940. The location was chosen, according to Himmler, because of its “convenient location as regards communication, and because the area can be easily sealed off.”

Rudolf Höss was given command of the camp. The first prisoners arrived in June 1940, there were about seven hundred of them. The first prisoners to arrive at Auschwitz were Polish political detainees. Due to being overworked and undernourished, there were high mortality rates from the start. The camp was a source of forced labour and so many German manufacturers moved to Auschwitz to make use of this ‘resource’.

In 1941, the subsidiary camp of Birkenau was built, with the intention to boost the slave-driven economy of Auschwitz. However, due to the high number of deaths of Soviet prisoners, this was not to be. Instead, the camp had its purpose changed to a much more sinister one. Instead, it would be used for the mass murder of Jews, called the “Final Solution”.

The Role Of Auschwitz In The “Final Solution”

The “Final Solution” was the official code name for the murder of all Jews that could possibly be reached. And so, by the end of 1942 Jews from all over Europe were being transported to their deaths at Auschwitz. Nazi propaganda made many believe that they were simply being transported to a new life. They were told that they were being sent to work in German factories and farms, which is why they brought their personal possessions with them.

The train journey to Auschwitz could take up to ten days. They were transported in sealed goods wagons and cattle trucks. On arrival, the victims would be lined up and inspected. They were separated into to classes “fit” or “unfit” to work. Up to 75% of all new arrivals were deemed as “unfit”.

Those classed as “unfit” were told that they were permitted to have a bath. They were then ordered to undress, taken to the “shower room” and murdered by the means of poisonous gas being sprinkled through special ceiling attachments. This allowed for up to two-thousand people to be killed at a time. Each mass murder took fifteen to thirty minutes.

From 1944 onwards, the greatest massacres happened. This was after a special railway terminal was installed at Auschwitz-Birkenau which made the “processing” faster.

Before the victim’s bodies were burnt, SS guards took what they could from the bodies. Jewellery, fillings and even hair were stripped from the bodies. What was taken was used by the Nazis. For example, the hair was used for mattresses and their clothes processed into army uniforms.

As the Soviet army was approaching Auschwitz, the Nazis evacuated. The final evacuation of the camp saw 56,000 prisoners take up the “Death March”. Many prisoners died on this march, which saw them march westward. Anyone who was sick or couldn’t keep up was shot.

In January 1945 Auschwitz was liberated by Soviet forces, though camp liberations were not their main intention, just a consequence of advancing westward in Poland. Those that were too ill to be forced on the death march had been left to die. About 7,000 prisoners had been left and so were freed by the Red Army. 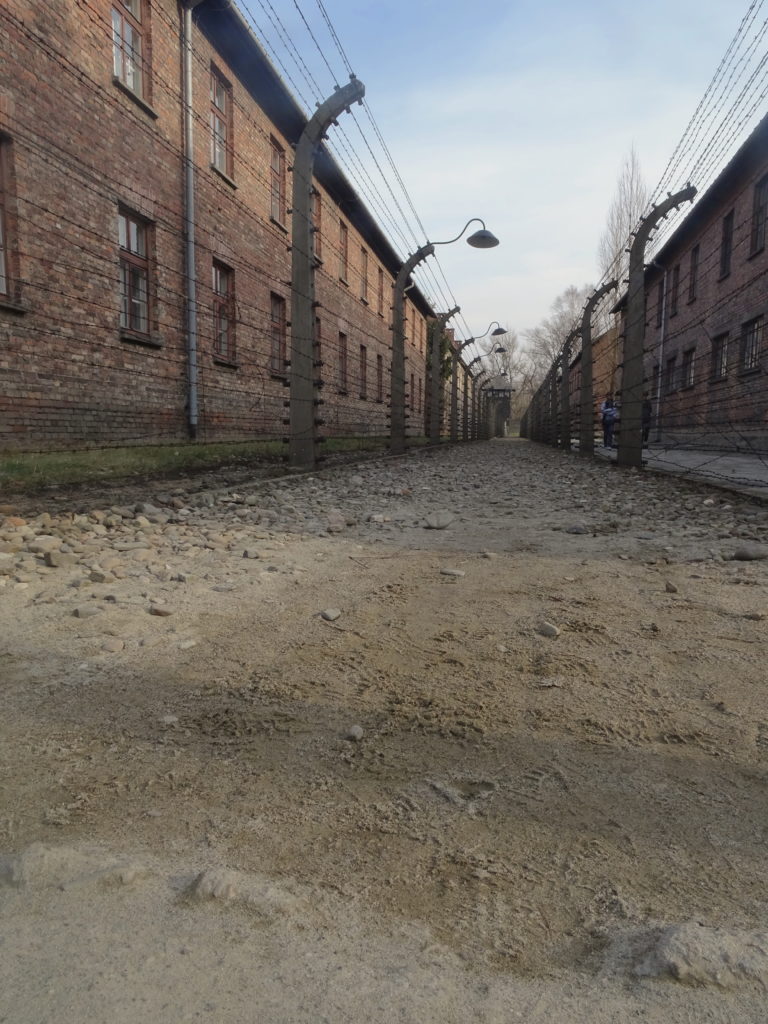 The Dark History Of Auschwitz Can Be Felt Everywhere

Auschwitz has more than a few horrifying facts. Here are just a few:

The museum and memorial of Auschwitz is in the Auschwitz I camp. You can also visit Auschwitz-Birkenau, which has been left pretty much as it was found. I highly recommend making sure you leave enough time to see both, to fully understand the horror of the place.

However, this post is dealing with Auschwitz I only. In the concentration camp, the blocks have been turned into exhibitions about different parts of the camp. Each exhibition deals with a different theme. 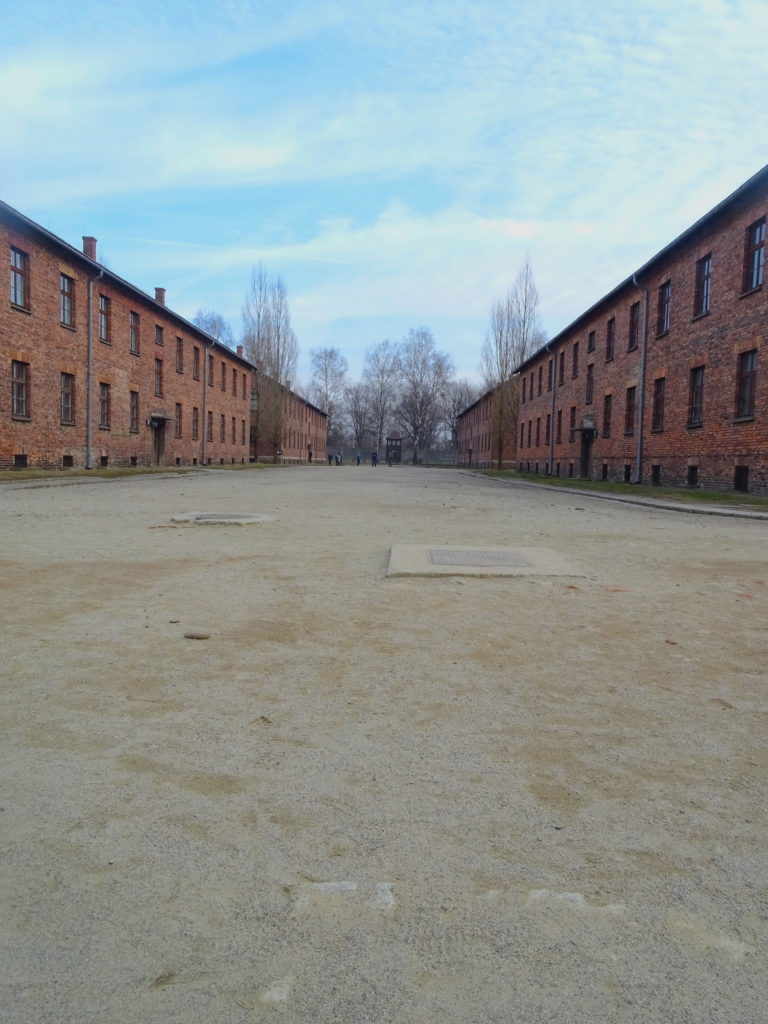 When you first walk into the camp, you enter via the gate which bears the slogan “Arbeit Macht Frei” which means “work sets you free”. From there you can wander around the site and go into various buildings. Once through the gates, you are enclosed in the camp. There are fences with barbed wire like there would have been in its past. 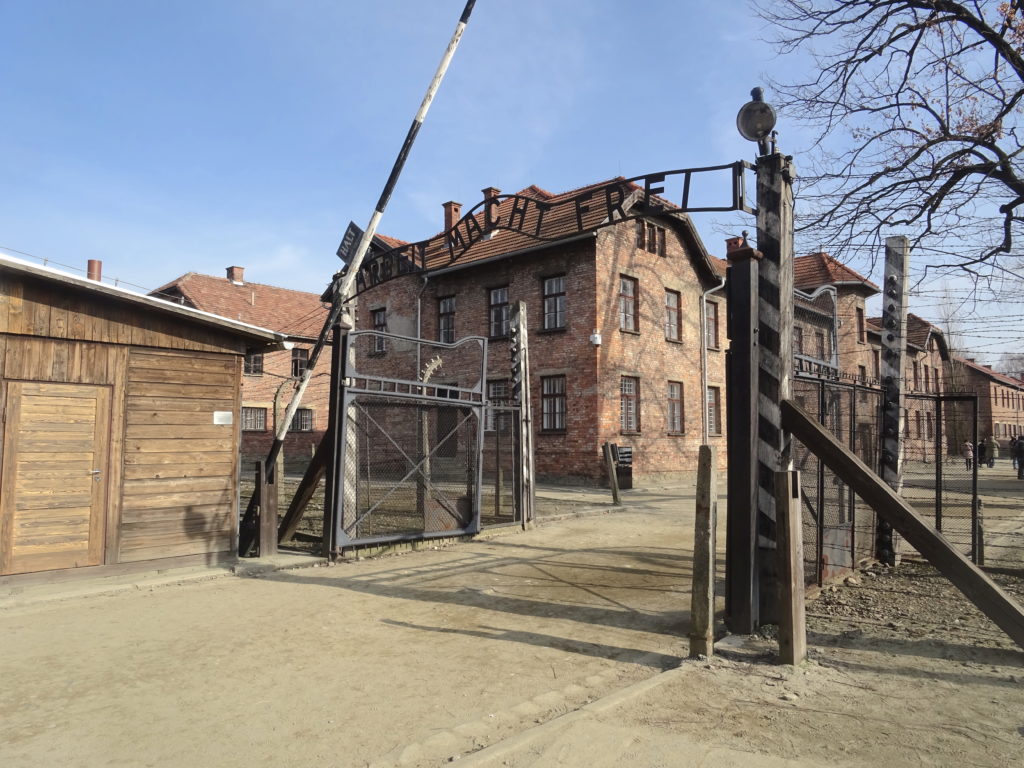 The Slogan On The Gates Translates As “Work Sets You Free”

In each exhibition, you will find photographs of the victims and of life in the camp, memoirs and stories of prisoners and guards, information about the history and life in the camp, and important objects. Some of the blocks you may want to see are:

In the grounds, you can also visit the first gas chamber on the site. This gas chamber and crematorium was used until the mass murders were moved to Birkenau. 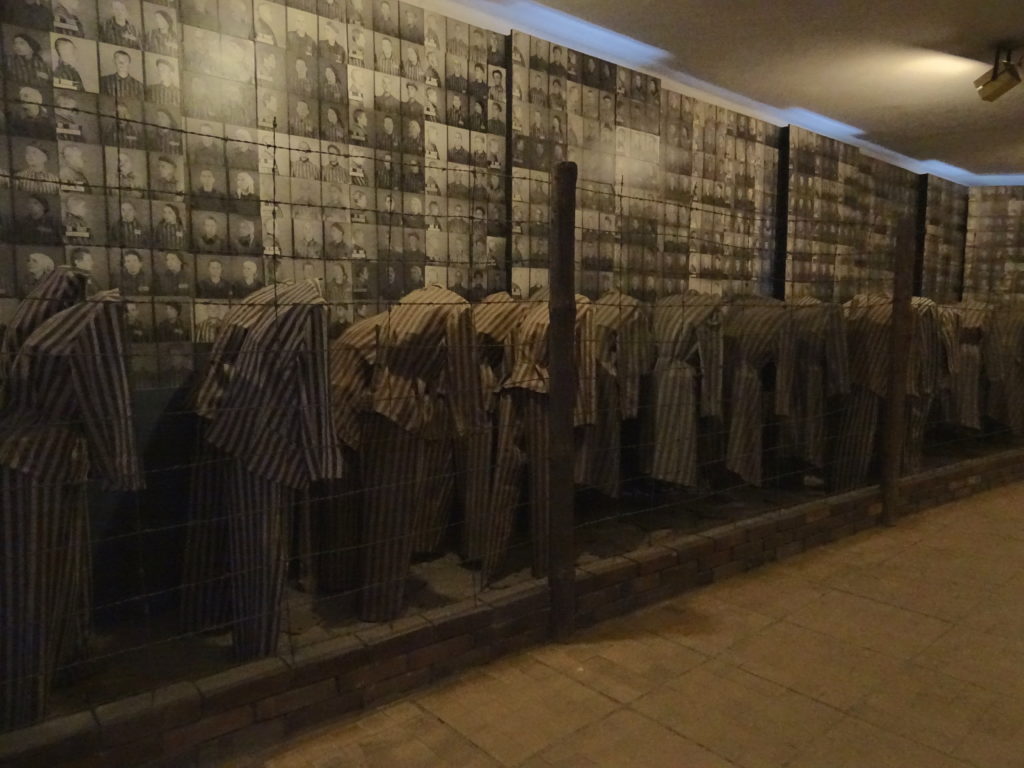 The Exhibitions Are Powerful 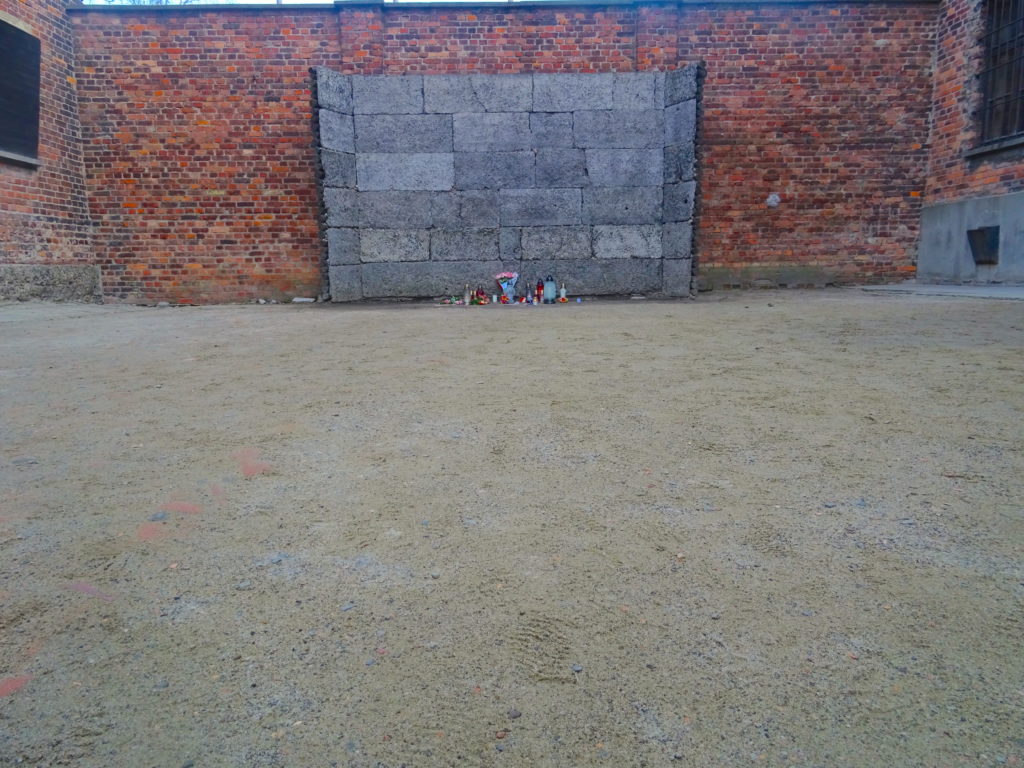 People Leave Offerings At The Shooting Wall In Remembrance 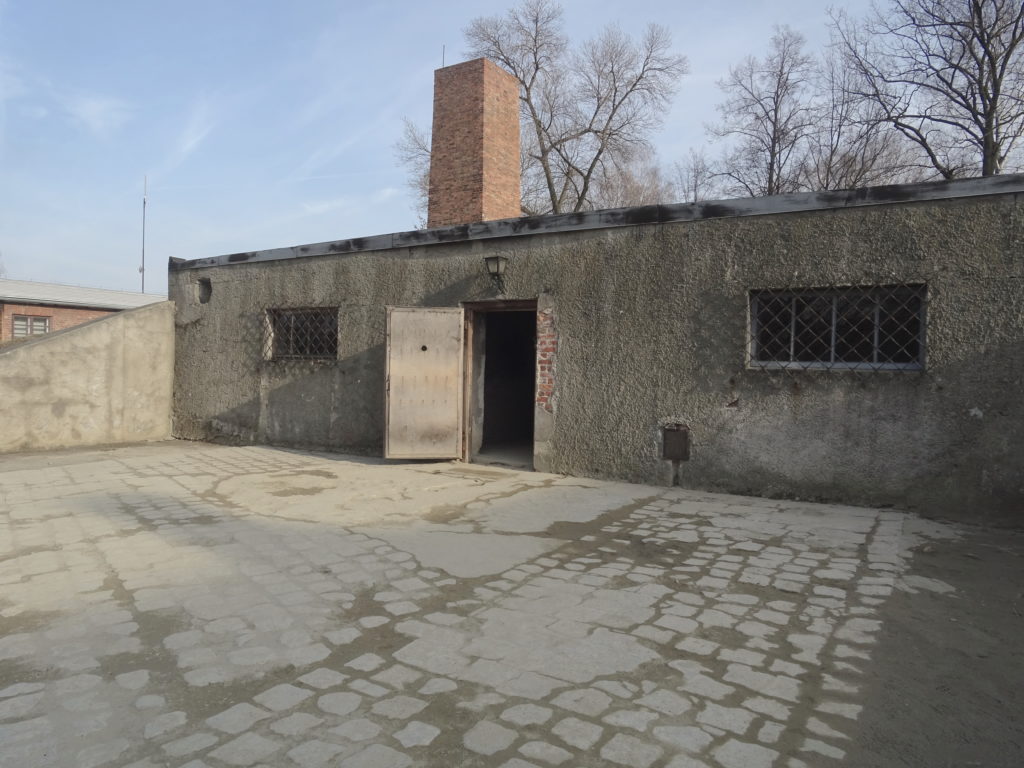 The First Gas Chamber In Auschwitz

Before visiting be aware that this place is, I have no other word for it, horrible. It is heartbreaking. Though you should visit, remember what you are visiting and what happened here. When you visit Auschwitz please keep in mind:

You can find full rules for visiting here.

On a different note, here are some practical bits to consider before visiting:

More information can be found here. 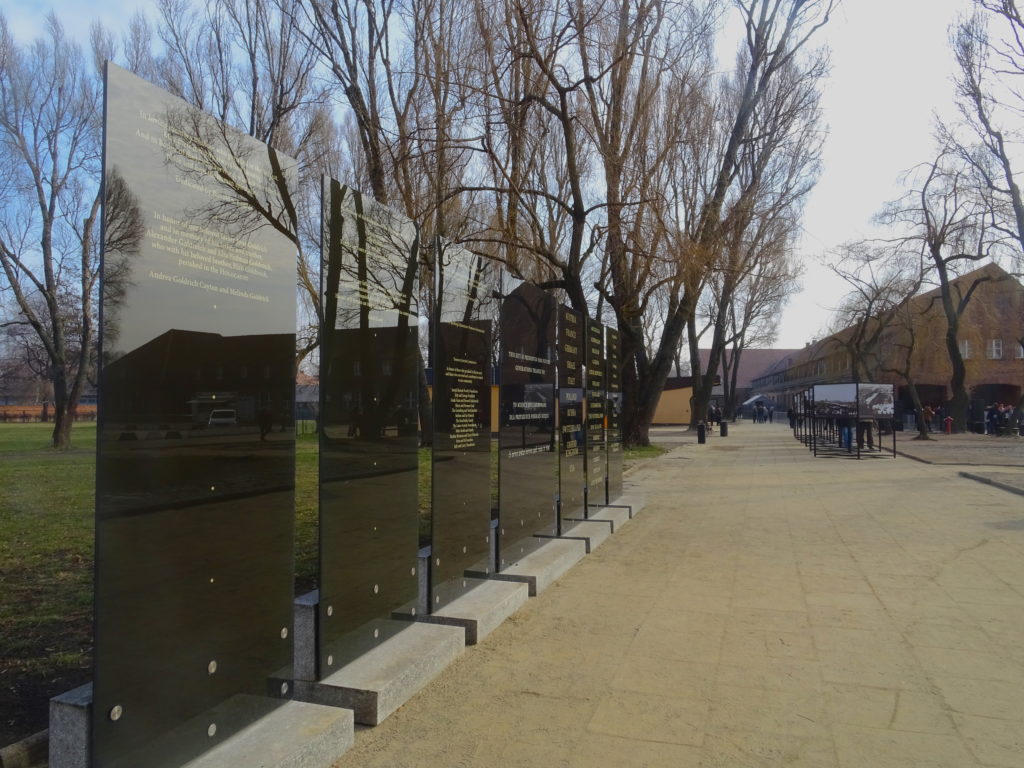 Heading To The Entrance

How To Get To Auschwitz

It is most common to go from Kraków to Auschwitz, though the camp can also be reached from Warsaw, though the journey is longer. It is definitely more practical to visit the camp on a day trip from Kraków.

To do this you can book a tour from Kraków. With a guided tour you can be sure you see all the main important bits and have transport provided. Most tours include Auschwitz I and Auschwitz-Birkenau. You can also do a tour that takes in Auschwitz and the Wieliczka Salt Mine in one day, such as in this tour. This is a good option if you are pushed for time.

Have a browse at Auschwitz tours on Get Your Guide.

Alternatively, you can get to Auschwitz from Kraków on your own. Doing this allows you to go through the exhibitions at your own pace. Though make sure you book a time slot in advance.

To get to Auschwitz from Kraków, you can catch a train or bus from the central station. Buses from Kraków also drop off at the train station in Oświȩcim. You can book transport with Flixbus.

The train station at Oświȩcim is about 1 mile (2km) from the concentration camp. This is about a twenty-minute walk. 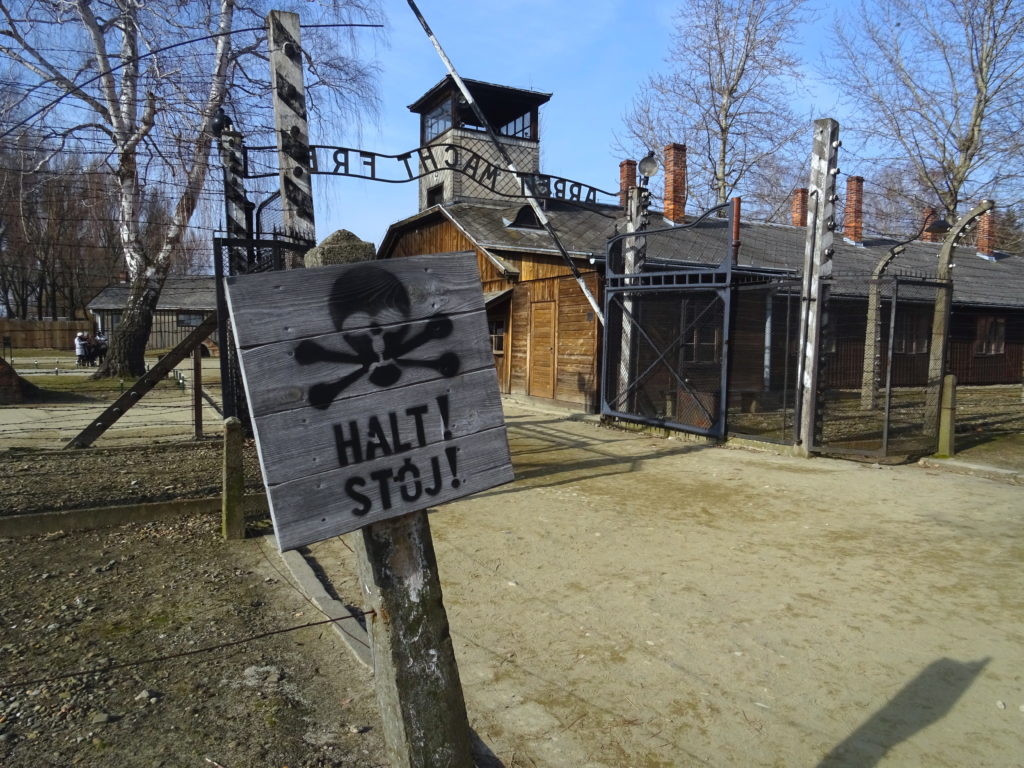 Auschwitz Is An Important Place To Visit

Visiting Auschwitz was one of the hardest things I have done. Seeing the concentration camp drives the horror of the Holocaust home. I would not say it is a “must-see”, but everyone should visit.

If you plan on visiting I recommend staying in Kraków and doing a day trip from the city. Go to HostelWorld for nearby hostels. Also, check out day trips available on Get Your Guide. 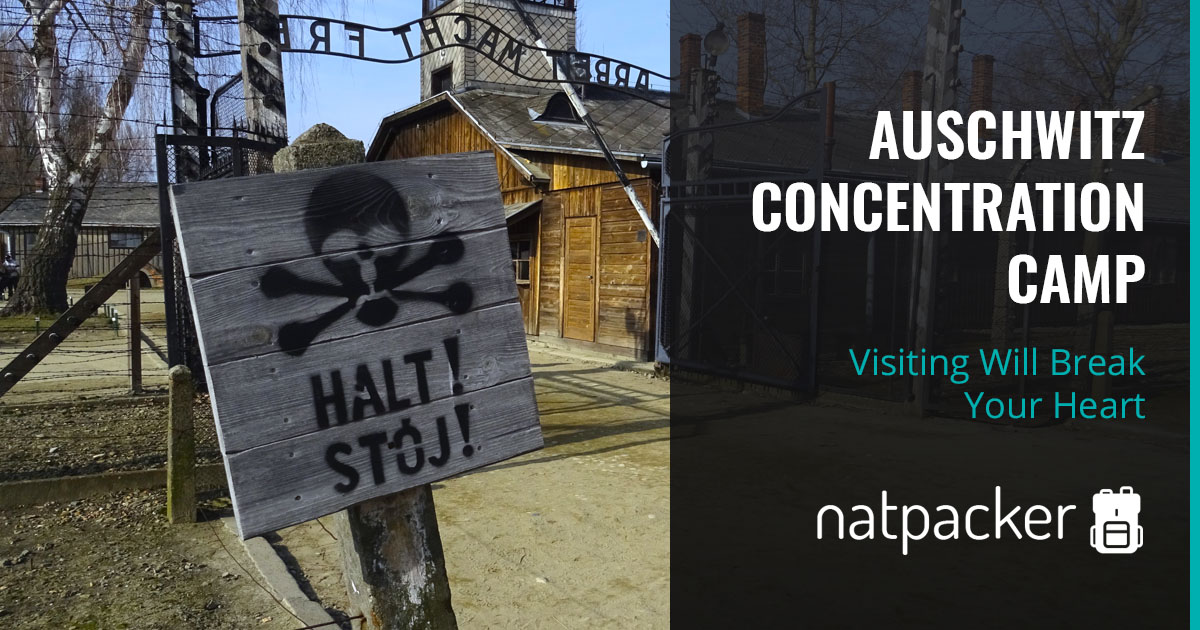