Coimbra might not be on top of your “to visit in Coimbra” list, but this small city is a real gem that is worth exploring if you have the time. One of the many things to do and see in Coimbra is the Convento de Santa Clara-a-Velha. Whether you are planning a day trip from the bigger cities like Porto or Lisbon, or are spending a few days exploring the city, this old monastery is well-preserved and easy to get to. With plenty of history to be discovered the Old Monastery of Santa Clara is well worth a few hours of your time.

The History of the Old Santa Clara Monastery

As you might expect, the Santa Clara-a-Velha Monastery has a wealth of history surrounding it. Being around for centuries, this gothic monastery has plenty of tales to tell.

The Building of the Monastery in Coimbra

The Monastery of Santa Clara of Coimbra was founded in the 1280s, as a house of the Order of the Poor Clares. However, the original monastery did not last long and was dissolved in 1311. Luckily, in 1314, the Monastery was refounded by Queen Elizabeth (also known as Elizabeth of Aragon and Saint Elizabeth of Portugal), who was known for her charitable nature. 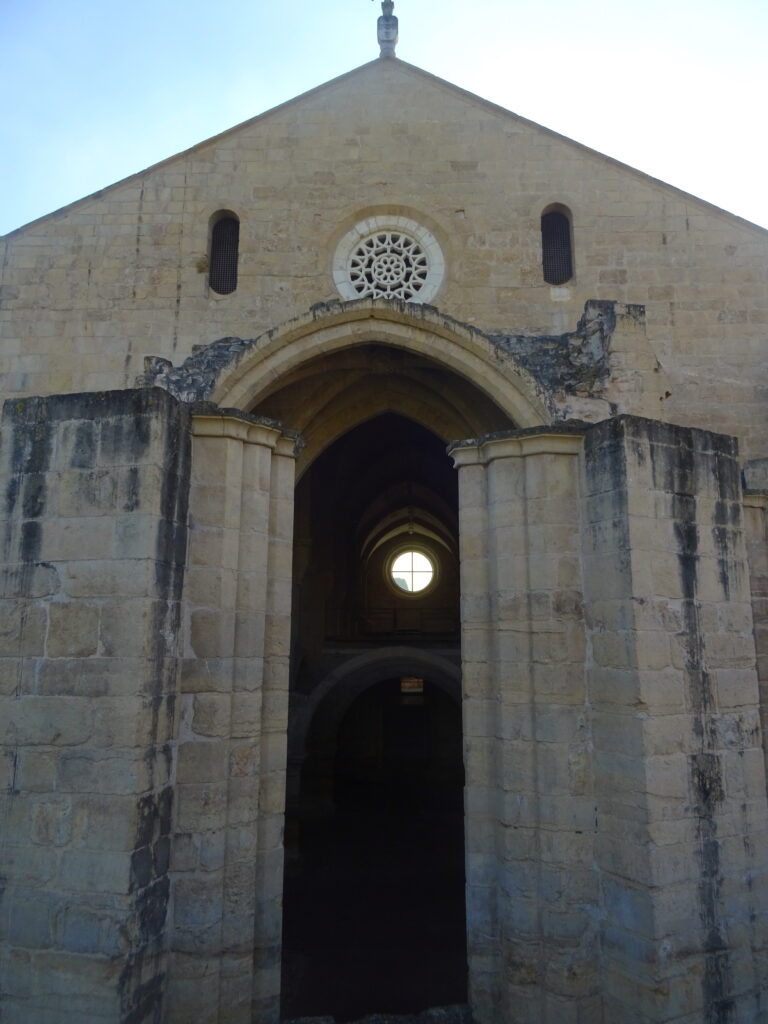 The Main Entrance to the Ruins

Elizabeth of Aragon sponsored the building of the new Monastery, and it was built on the same foundation as the previous monastery of Santa Clara. The work began in 1316, and the first architect associated with the work was Domingos Domingues. This work was taken over in 1326 by Estêvão Domingues. In 1330 the church was consecrated. In 1336, Queen Elizabeth died and she was buried here in a gothic tomb.

The Flooding of Santa Clara-a-Velha

Unfortunately, the Monastery was not located in a great spot. By 1331 the church and monastery were flooded by the nearby Mondego River. The nuns combated this by elevating the floors, but it was not enough. 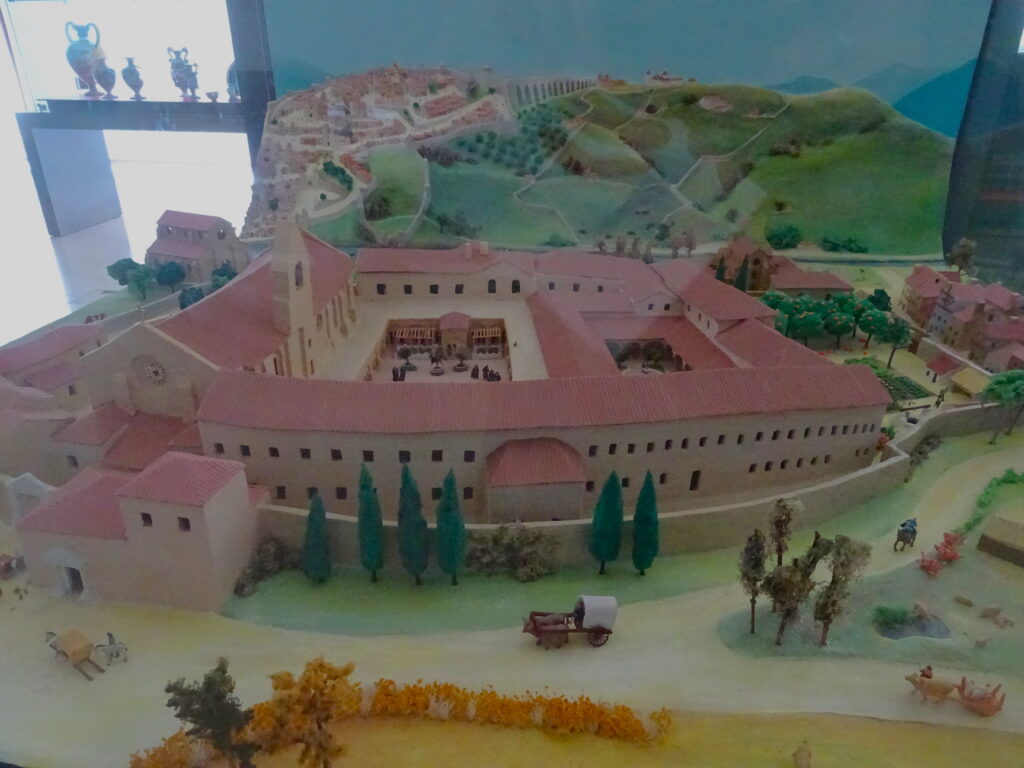 Over the centuries, the monastery was flooded time and time again, and the life of the nuns there was literally controlled by the river. In 1647, King John IV ordered the nuns to abandon the Monastery. So they began to leave, as the New Santa Clara Monastery was built nearby. In 1677 the last of the nuns had left. The tomb of Queen Elizabeth was also moved to the new monastery. 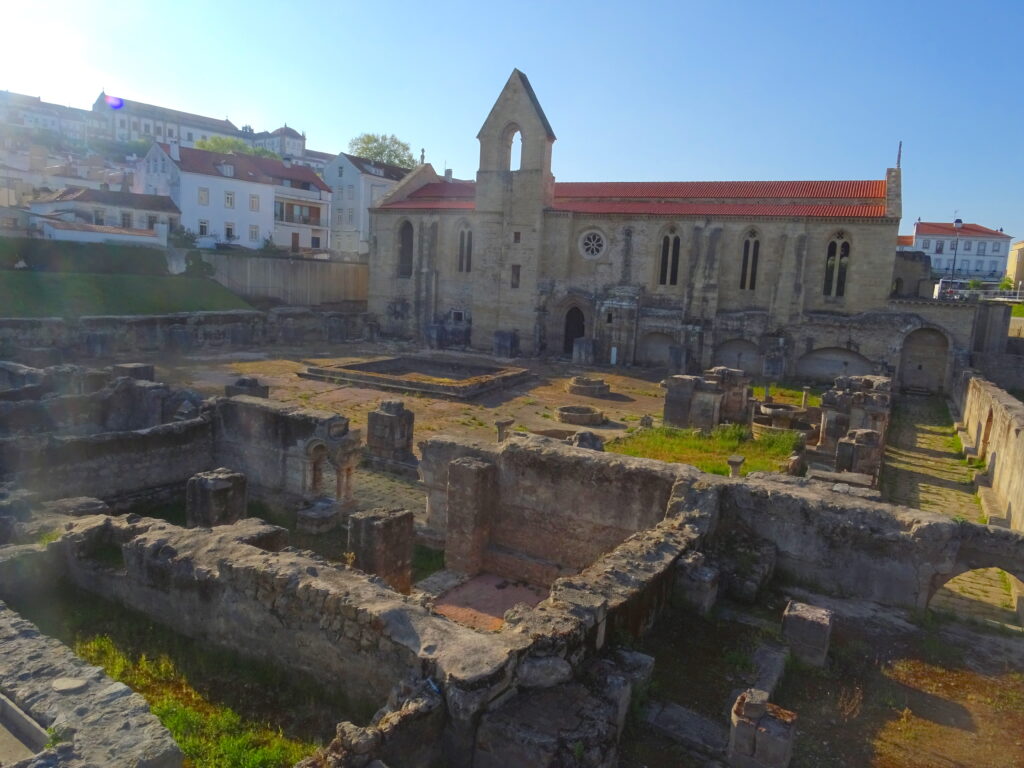 Much of the Ruins of the Old Monastery are Well Preserved

The name Santa Clara-a-Velha literally means “Old Santa Clara”, as a new monastery was made to replace this one.

After being abandoned, the monastery was left to ruin. It was still frequently flooded and even became partially covered by the marshes of the river. However, due to its historical and architectural importance, it was declared a national monument in 1910. Some recovery works began in the 1930s, but the river still had the upper hand. Then in 1991, an ambitious recovery plan commenced under archaeologist Artur Côrte-Real. Mud and water were cleared from the ruins, which were found to be in good condition. The recovery took 19 years and in 2009 the Old Santa Clara Monastery was opened to the public. 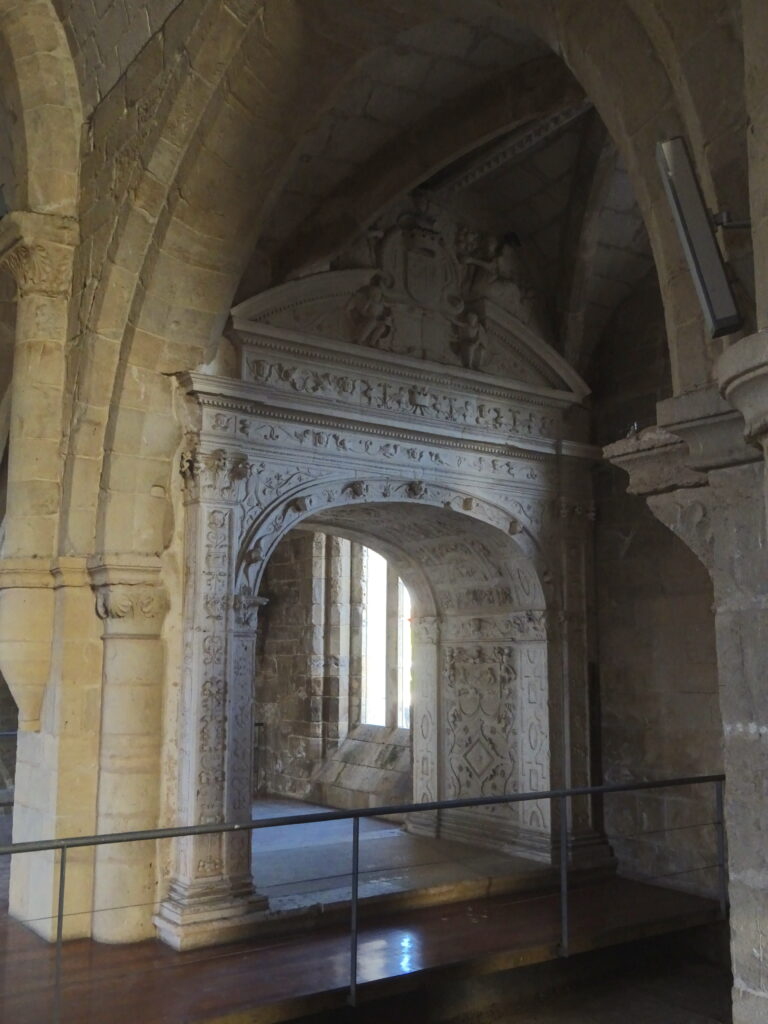 The Monastery Has Many Beautiful Features, Like This Decorative Archway

Visiting the ruins of Santa Clara only takes an hour or so, but you’ll also want a bit more time if you want to take a look at the museum too.

The museum is attached to the entrance of the Monastery of Santa Clara-a-Velha, so you have to walk through it to get to the ruins. Inside you will find various objects that were found during the excavations, as well as a model of how the monastery once looked. Here you will also find out more about the history and the excavations that took place.

As you leave the museum and enter the grounds, the old church, the outside of which is pretty intact, is straight ahead and makes an imposing figure. Walkways take you over the marshy ground to the church and around other areas. 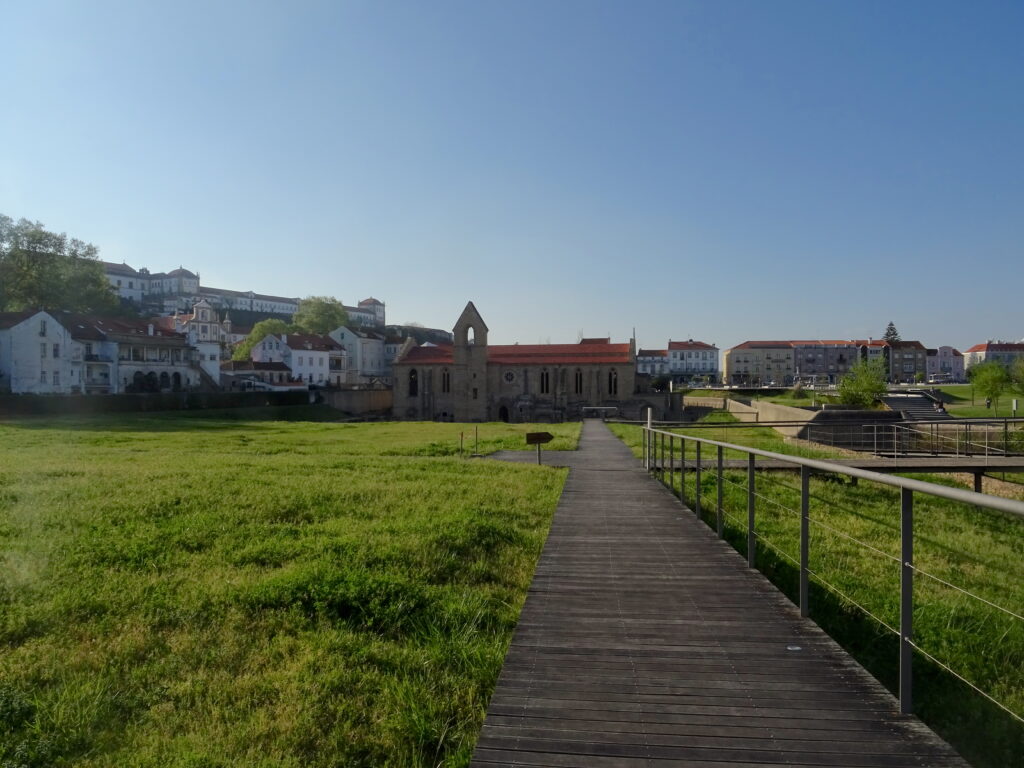 The Monastery Ruins are a Dramatic Sight

One place you pass is the ruins of the old Queen’s Palace, which is where Queen Elizabeth lived after she was widowed. This building also witnessed the love of Portugal’s real-life Romeo and Juliet – Prince Pedro and Inês de Castro. Inês was even executed here, by order of the king who refused to accept the couple’s love.

As you approach the church, you will pass the cloister ruins, you can get to these from inside the building. The path takes you to the front door of the church and once inside there is a lot to see.

The ruins are on two levels, the bottom level used to be constantly flooded but is now accessible. When it was first built, the worshippers and nuns were separated by a dividing wall, and there was an elevated choir that was also used to house Queen Elizabeth’s tomb. As the bottom floor regularly flooded, the worshippers’ area was moved to the higher level where the choir was and the choir moved higher. The lower floor was then used for burial.

You Get Some Good Views from the Second Floor

As you explore you will see intricate details on the building, mosaics and other art. Though most of the artwork is now in the Machado de Castro Museum. There are also stone arches and the roof is stone, which is unusual for the time of building. The building is lit by mullioned and rose windows. 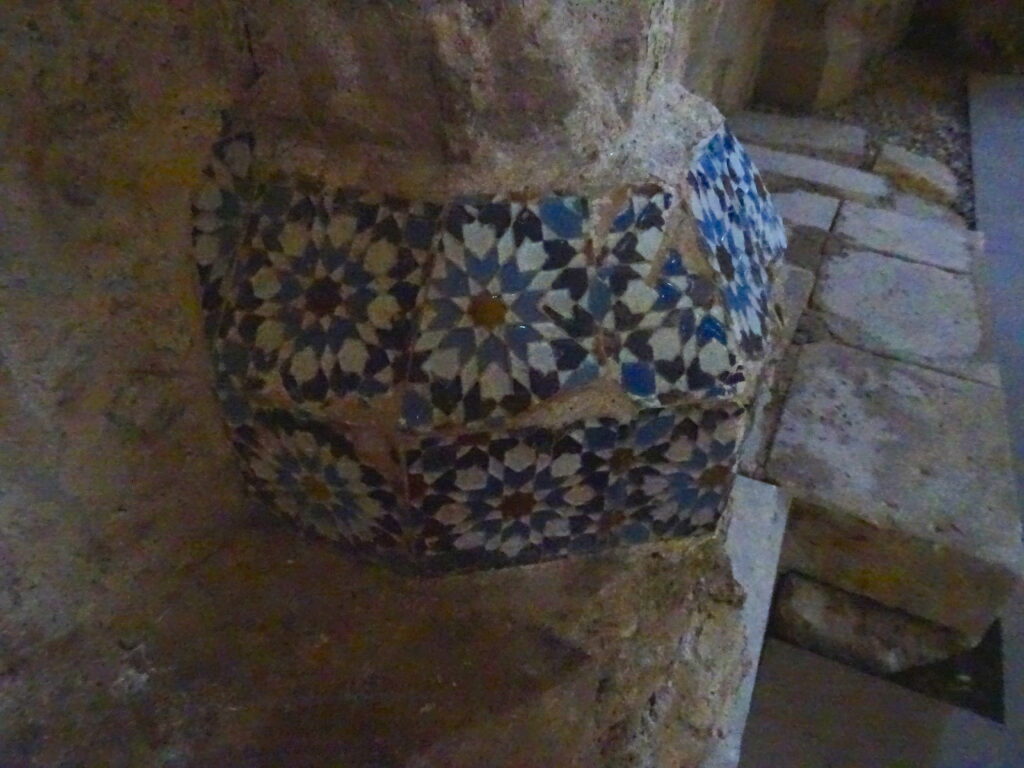 Out of the Side Door

The church has two doors, as worshippers entered through the side door due to it being a monastic church. The side door will take you out into the ruins of the cloisters. This area was the heart of the monastery, but it is mainly the foundations left. The columns that do remain have vegetable motifs carved on them. You will also find a fountain that was added in the 16th century. 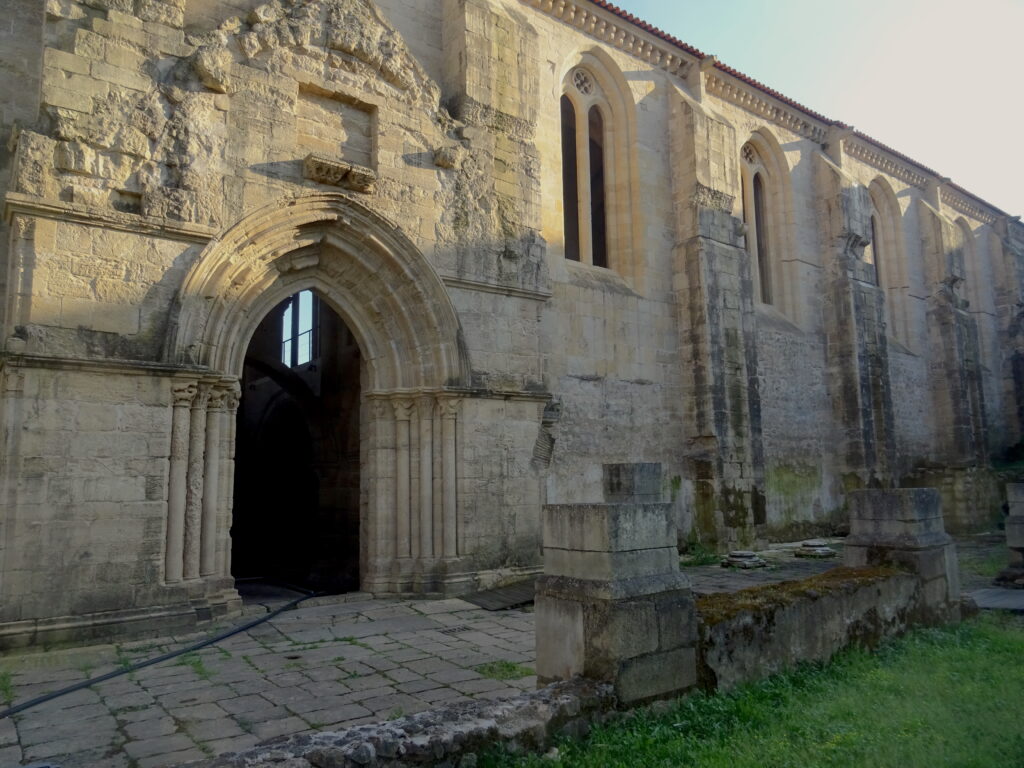 The Side Doorway Leads You to the Cloister Ruins 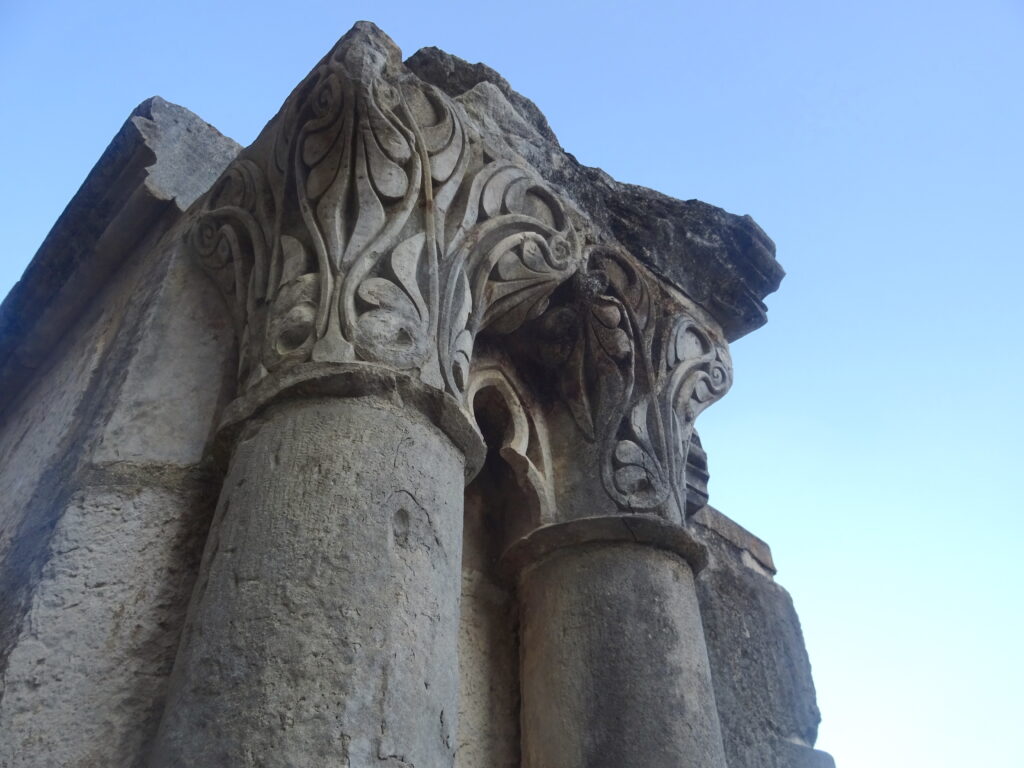 The Columns Outside Have Well Preserved Motifs

From the church and the grounds of the monastery, you also get some great views of the city. You can mainly see the hill on which the university sits. 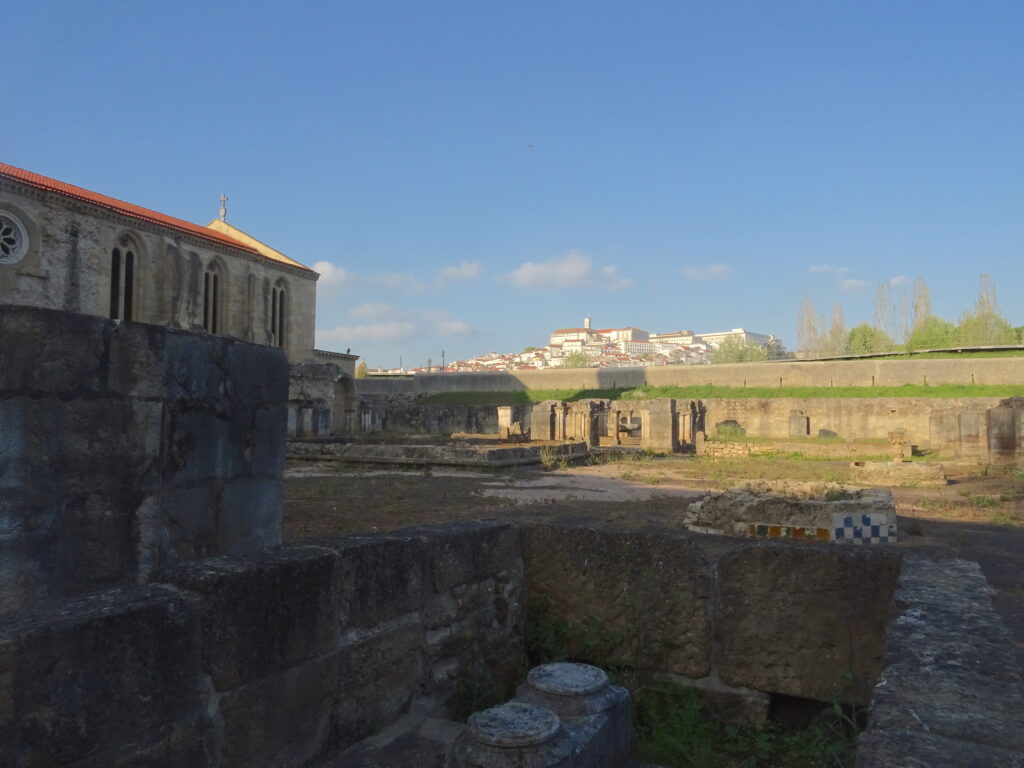 Getting to Santa Clara-a-Velha Monastery

The Old Santa Clara Monastery is on the other side of the river from the main city of Coimbra and the university. So it is a little out, but definitely worth heading out to. Though be sure to check the opening hours before visiting on the official website. 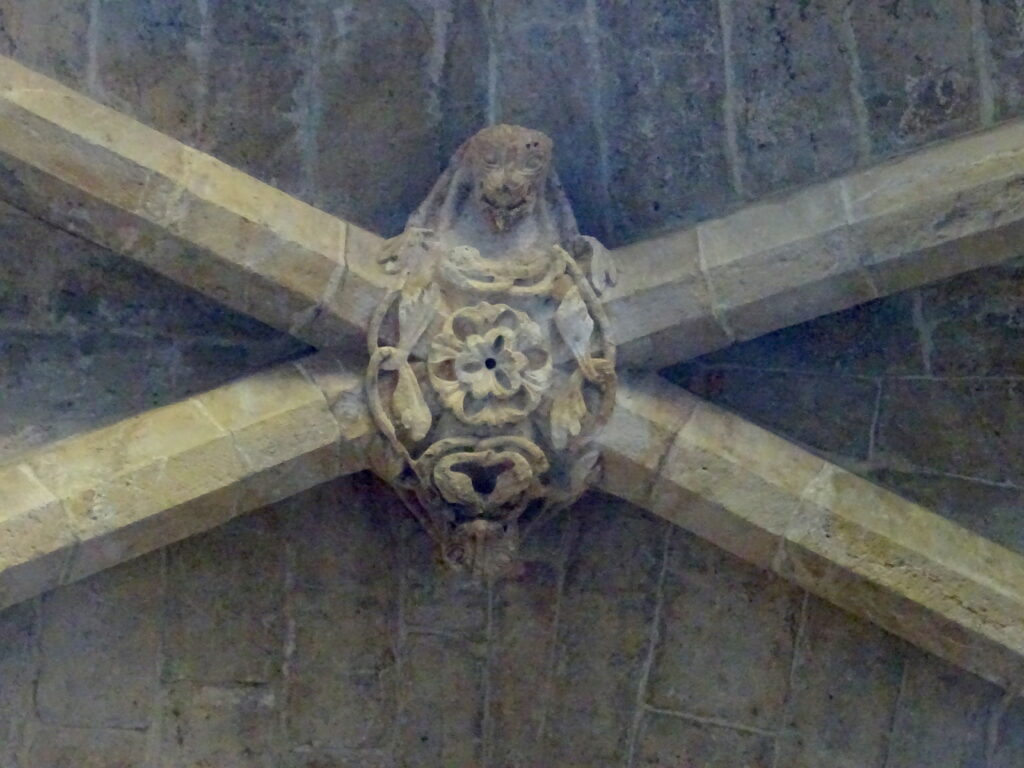 Getting to the old monastery is fairly easy. From wherever you are in Coimbra, simply head to the Mondego River. The best place to cross the river to get to the monastery is the Ponte de Santa Clara, which is on the edge of Parque da Cidade Manuel Braga. If you are coming from the train station, you should get to the bridge just before the park.

Once across the river, walk until you come to a roundabout and take the first left. Walk down this street for a little while and you should find some stairs to right, follow these stairs and carry on down the street which will take you to the entrance of Santa Clara-a-Velha. Don’t worry if you miss these stairs though! If you miss them, you will soon come to a crossroads and you want to take the right down Rua das Parreiras. The entrance to the Monastery will be found at the next right turn. 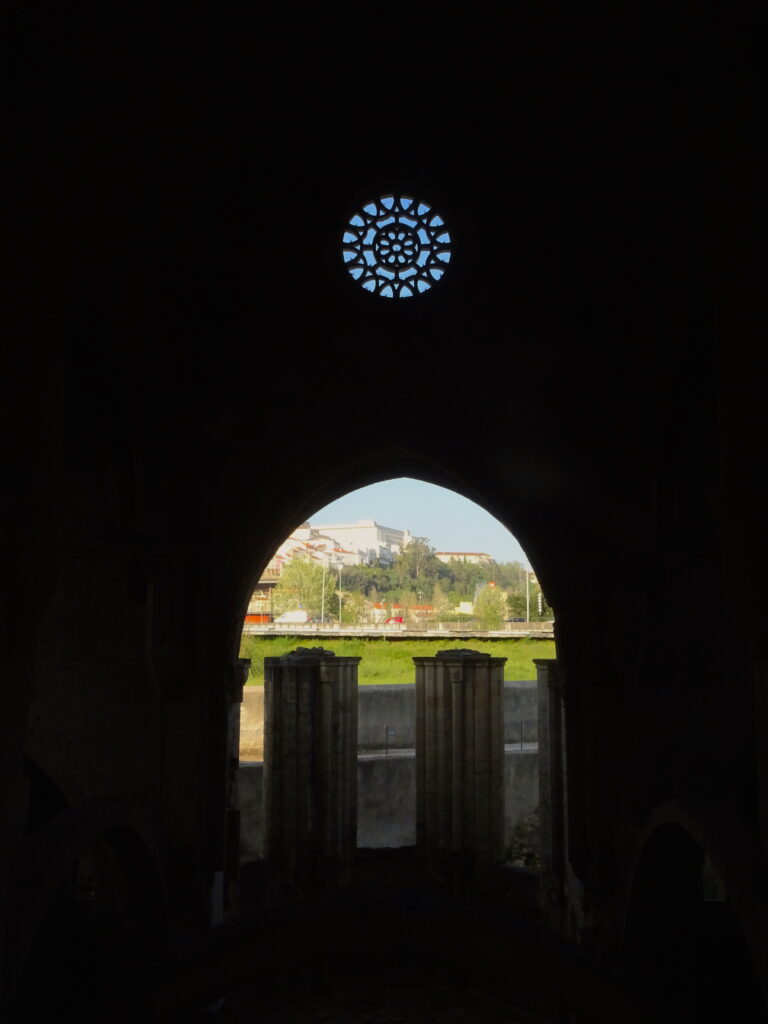 Santa Clara-a-Velha is Worth Heading Out To

If you want to stay longer in Coimbra, check out accommodation on HostelWorld 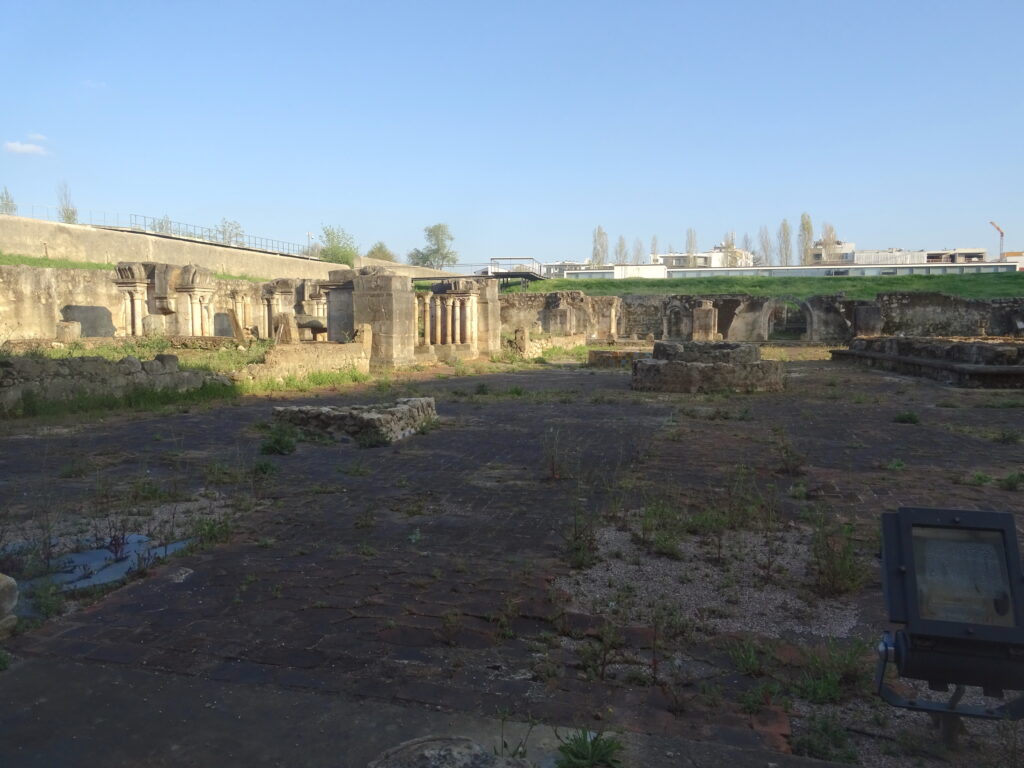 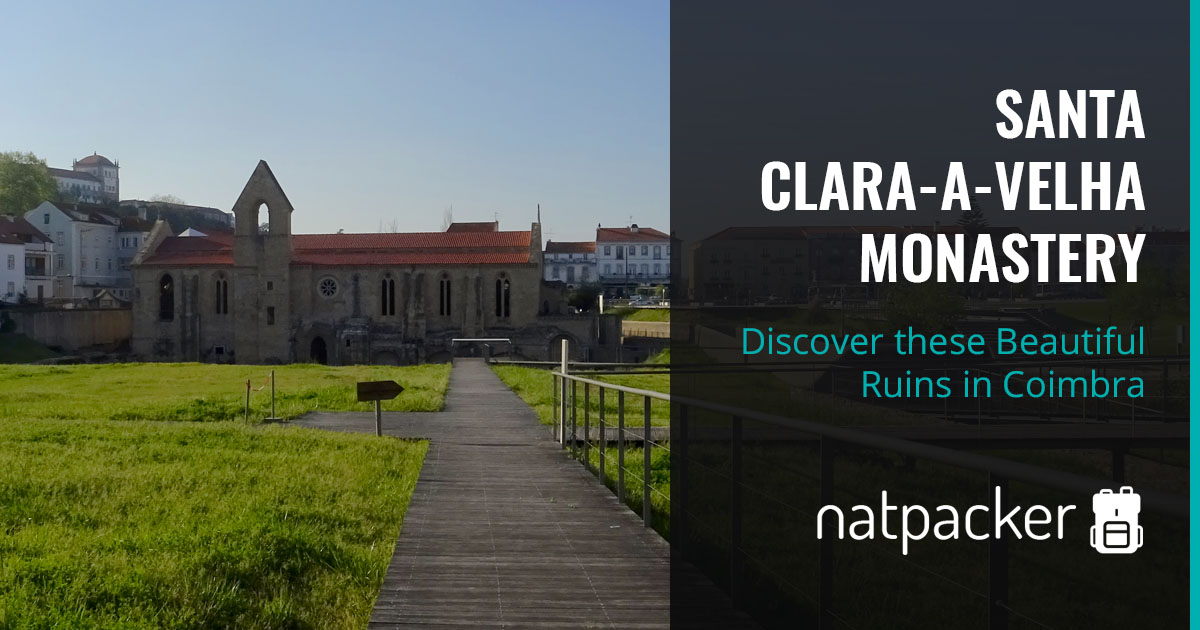