In the pretty medieval market town of Tewkesbury, in the Cotswolds Area of National Beauty, you will find an Abbey of the same name. Tewkesbury Abbey, also known as the Abbey Church of St Mary the Virgin, is a beautiful medieval church with lots of history and stories to tell.

The abbey was part of a former Benedictine monastery and is one of the finest examples of Norman architecture in Britain, It is also believed to have the largest Romanesque crossing tower in Europe.

Tewkesbury Abbey has a long and varied history. Although there are records of Christian worship in the town since the mid-7th century, with a monastery in 715, there is nothing left of this, all we have are records in the Chronicle of Tewkesbury.

Founded in 1087 by Robert Fitzhamon, the building of the Abbey did not actually begin until 1102. The Norman Abbey was built for Benedictine monks and was finally consecrated in 1121 when the Abbey was nearly completed. Therefore, in 2021 Tewkesbury Abbey will be 900 years old. During its time, the abbey was one of the richest abbeys in England during the Middle Ages.

Though the church remains unchanged from the early 12th century, it has seen a lot in its time.

The Battle Of Tewkesbury

If you want to know more about the Battle of Tewkesbury read my post about the Arrivall Sculptures, which commemorate this battle.

After the battle, some of the defeated Lancastrians went to the abbey for shelter. However, the York army, led by Edward IV, forced their way into the abbey. Bloodshed commenced as the two sides fought. This caused the church to be closed for a month as it had to be purified and re-consecrated. Tewkesbury Abbey Has A Lot Of History

Surviving The Dissolution Of The Monasteries

The last abbot surrendered Tewkesbury Abbey to the commissioners of Henry VIII in 1539, during the Dissolution of the Monasteries. But the townsfolk managed to save the church, although most of the other buildings were quarried for materials.

The townsfolk insisted that the Abbey Church was their parish church, which they had the right to keep. Therefore they were able to buy it from the crown. They did this for the price of £453, which was a lot back then. The price was the value of the bells and lead roof, which the crown would have otherwise salvaged and melted down.

Located on the southern edge of Tewkesbury, the abbey dominates the skyline. It is renowned for being one of the finest examples of medieval architecture in the UK. With a striking Norman tower and a long nave, the exterior of the abbey is certainly picturesque. But it is also well worth going inside (when I went in they simply asked for donations). 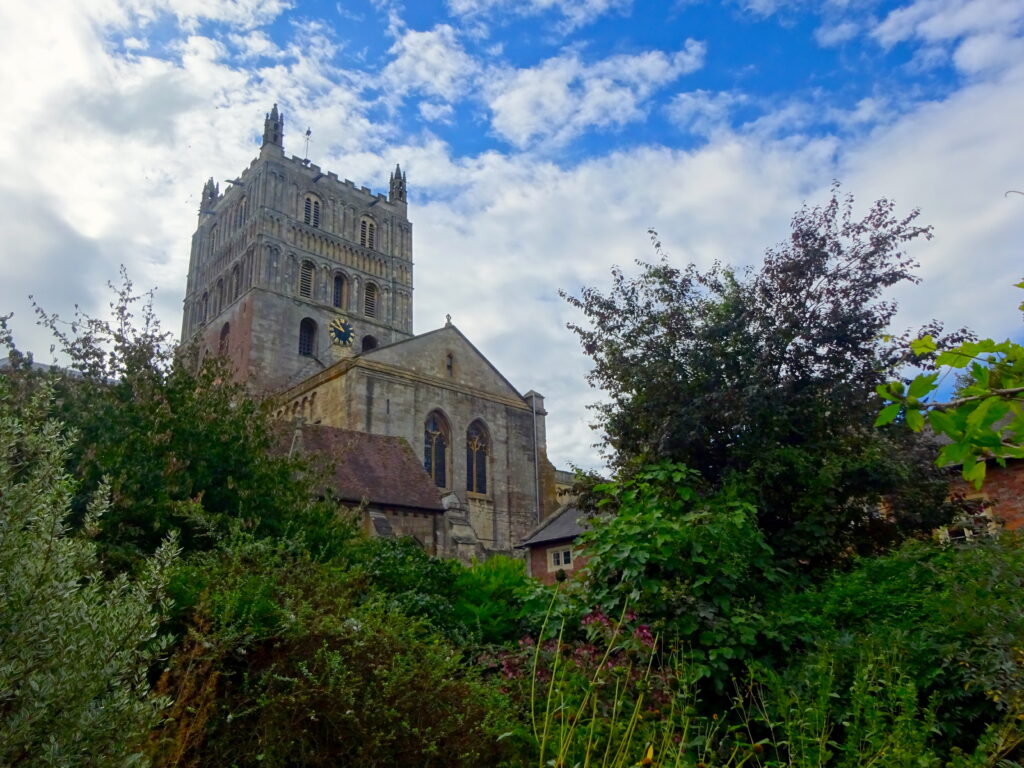 You Can Spot Tewksbury Abbey From Around The Town

Tewkesbury Abbey boasts the largest Norman church tower in existence, measuring 14 metres square and 45 metre high. There was also a wooden spire, but this collapsed in 1559. Over the years the bells in this tower were sold and replaced, which led to a “mixture” of bells causing a poor sound. So in 1962 twelve new bells were cast to replace the old. Four of the old bells were kept to be used as clock bells.

You can tour the tower at the abbey. Though I have not done this so can’t say what it’s like.

Things To See Inside Tewkesbury Abbey

Inside Tewkesbury Abbey, there’s plenty to see. The abbey has three organs, plus many monuments and burials. In fact, only Westminster Abbey contains more medieval monuments than Tewkesbury. 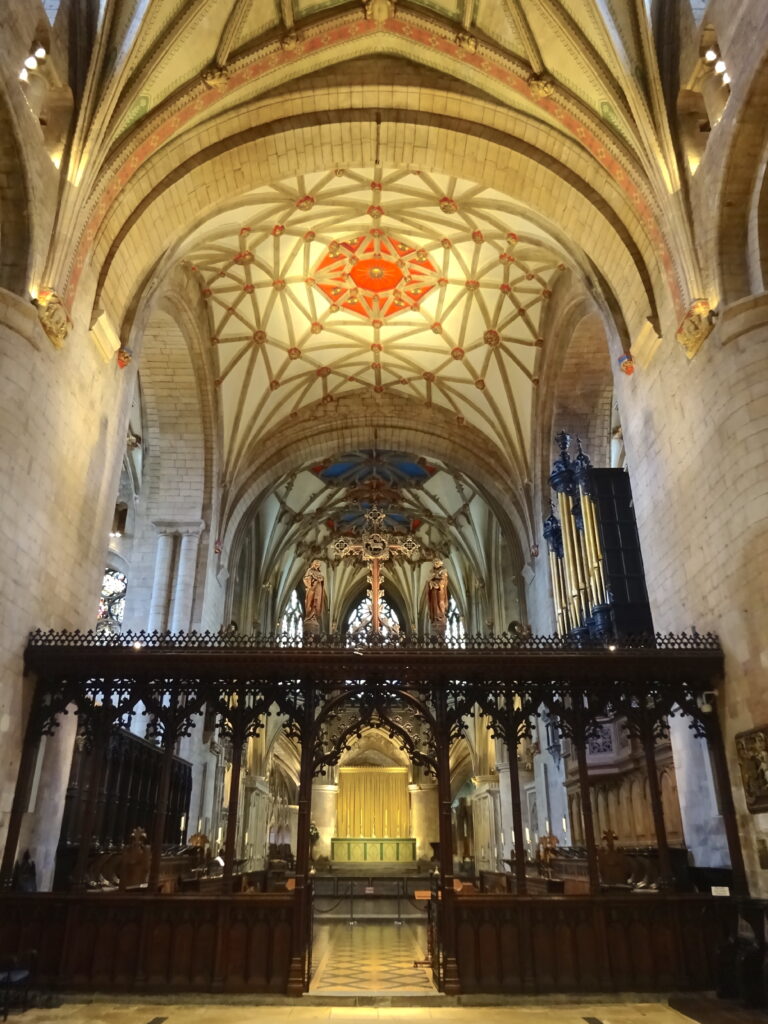 Inside The Abbey Is Beautiful 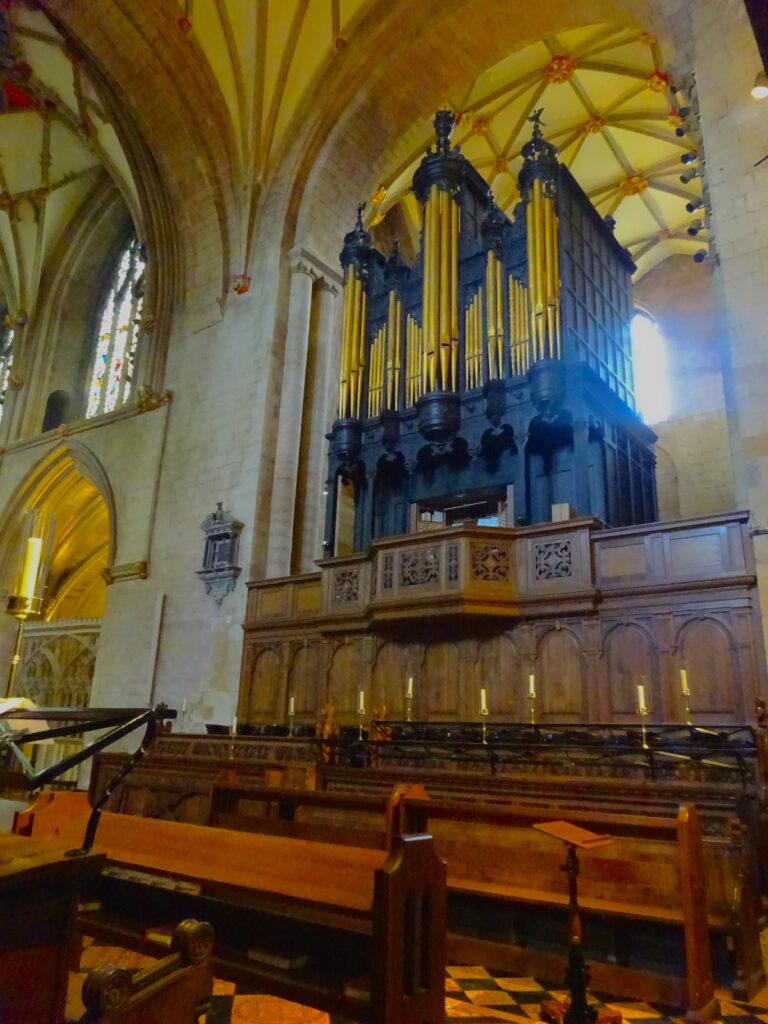 One Of The Three Organs

One to look out for is the monument of Edward of Westminster, Prince of Wales, the son of King Henry VI. Edward of Westminster was killed in the Battle of Tewkesbury, at the age of 17. He was the end of the Lancastrian line and the only Prince of Wales to die in battle. His grave is in Tewkesbury Abbey and is marked by a brass plate on the floor in the centre of the sanctuary.

The statues and carvings around the abbey are beautiful. One I noticed was a bagpiping angle. I believe that there are only three of these in the UK, though other than St Giles Kirk in Edinburgh I do not know the last one’s location. 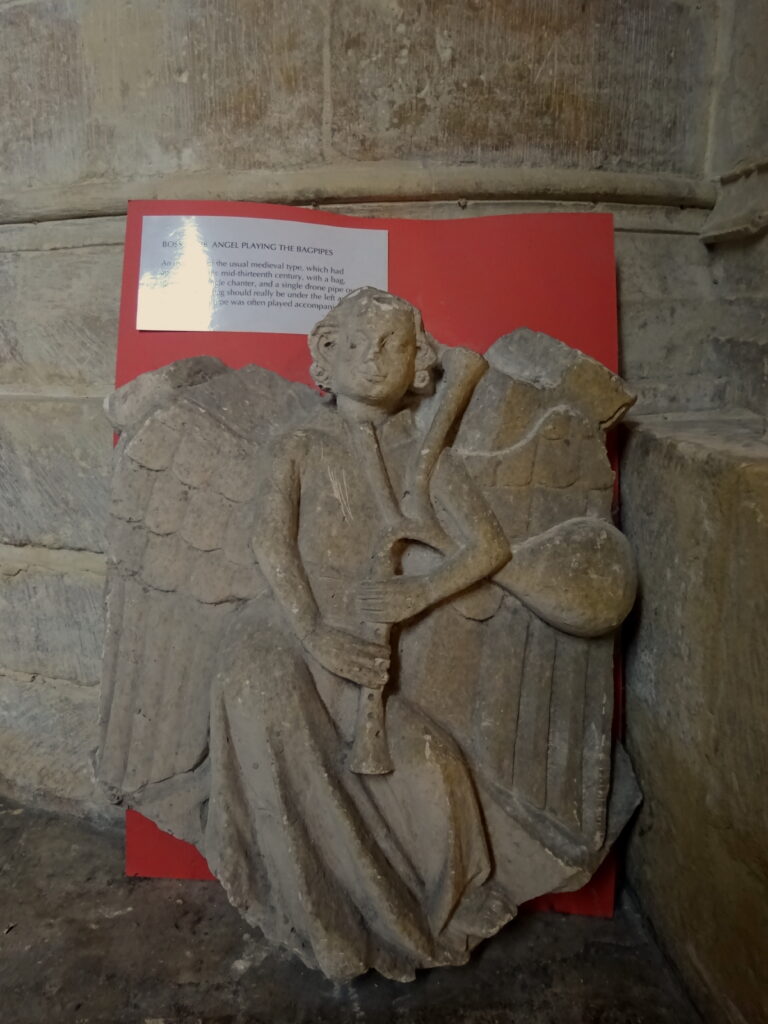 When you enter the abbey the first you are likely to notice is the west window which was constructed in 1686, replacing an older window that was blown in by wind in 1661. This shows the journey of Jesus from birth to ascension. 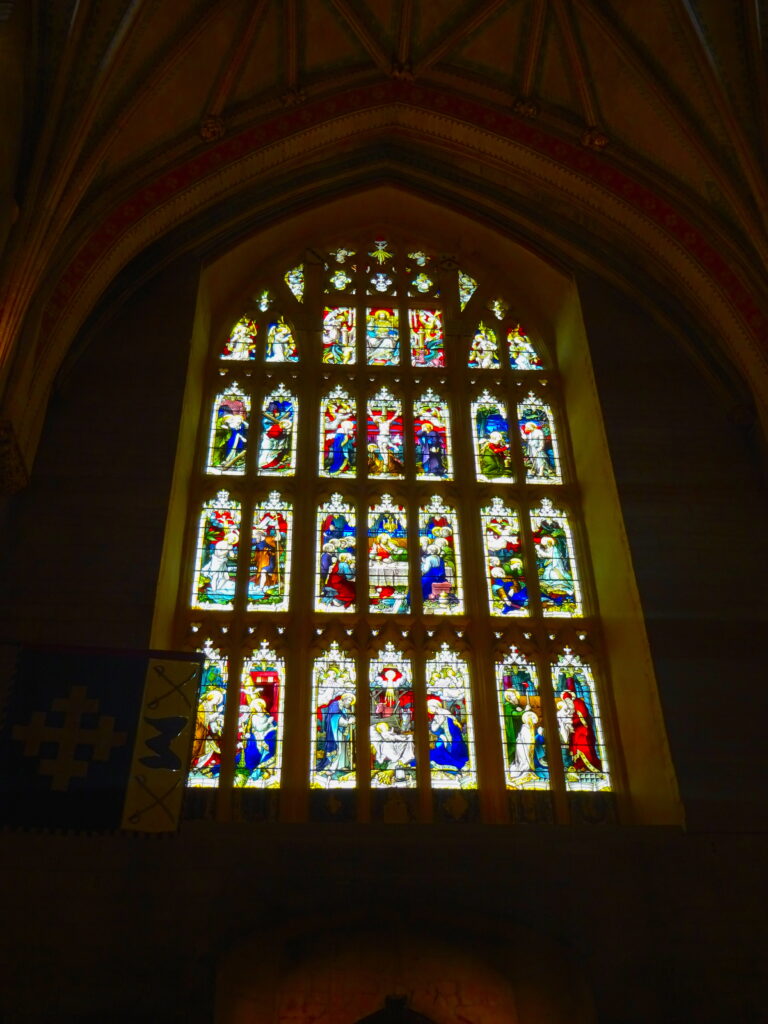 One Of The Windows Showing The Life Of Jesus

Most famous of the windows are the seven medieval stained glass windows in the choir clerestory. These are from the 14th century and depict various kings and prophets.

The victorian windows are in the north and south aisles. These show the life and death of Jesus, showing scenes such as the Feeding of the Five Thousand and the Sermon on the Mount. 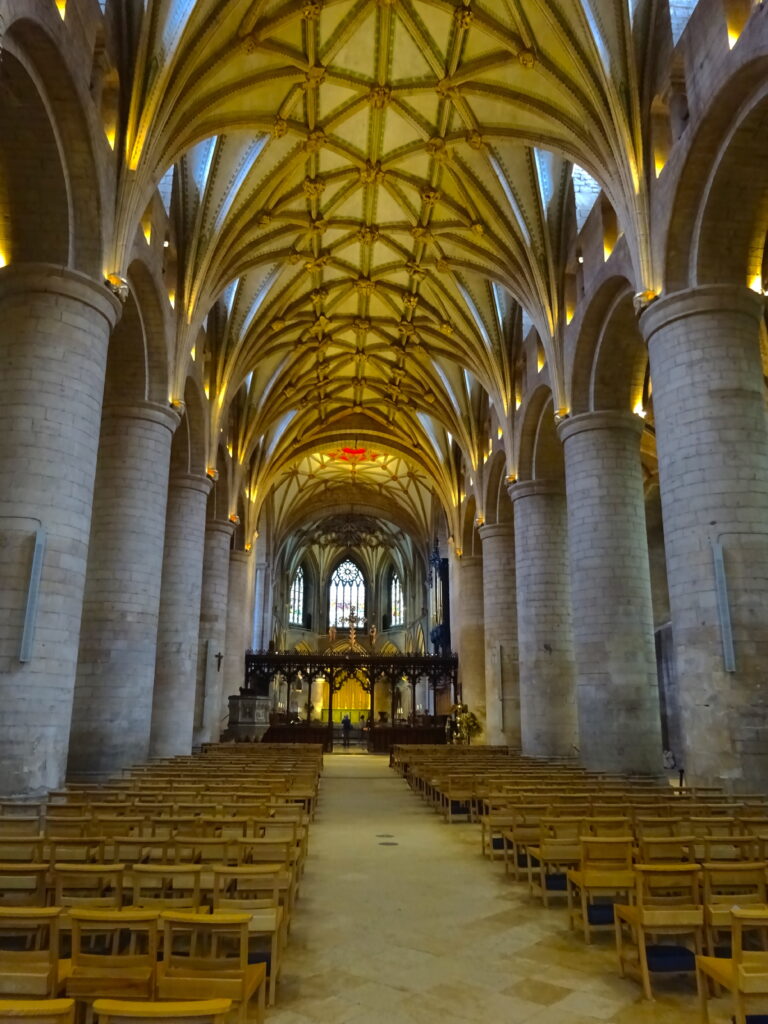 The Stained Glass Windows Are Hard To Miss

How To Get To Tewkesbury Abbey

In the county of Gloucestershire, once you reach Tewkesbury the abbey isn’t hard to find, it really does dominate the skyline. You can find it on Church Street. 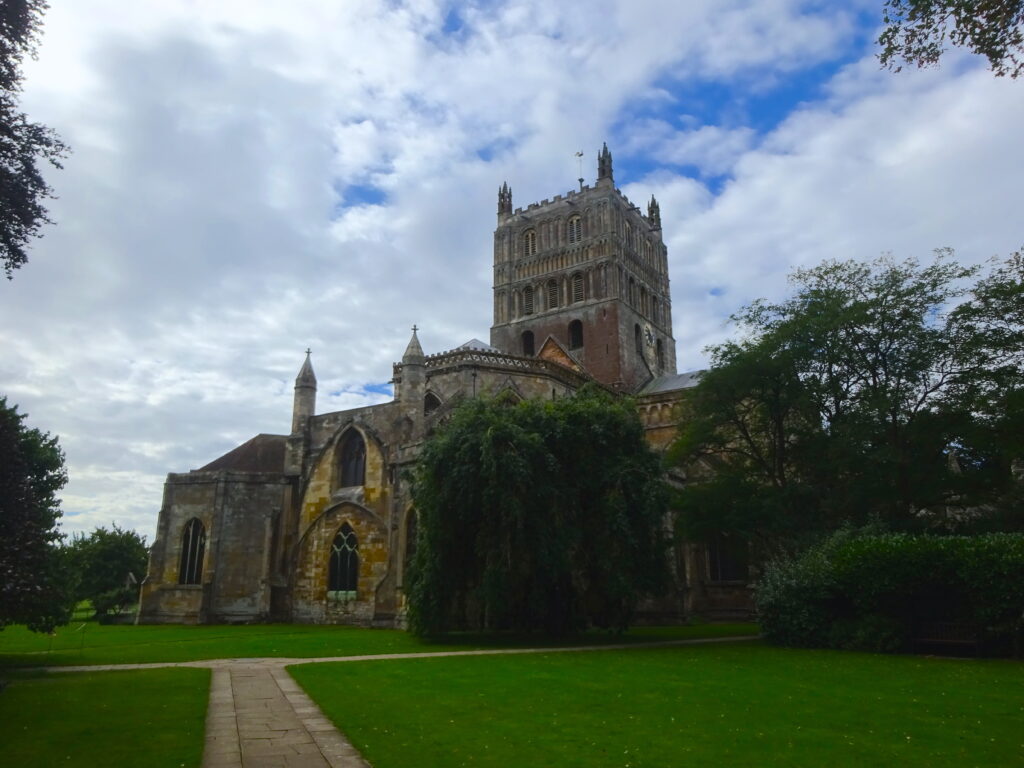 If you are driving, there are plenty of car parks around the town, these are pay and display. Wherever you park you’ll easily be able to find Church Street and the Abbey.

Want to explore Tewkesbury Abbey and the town? Check out hostels in the nearby city of Gloucester on Hostelworld. 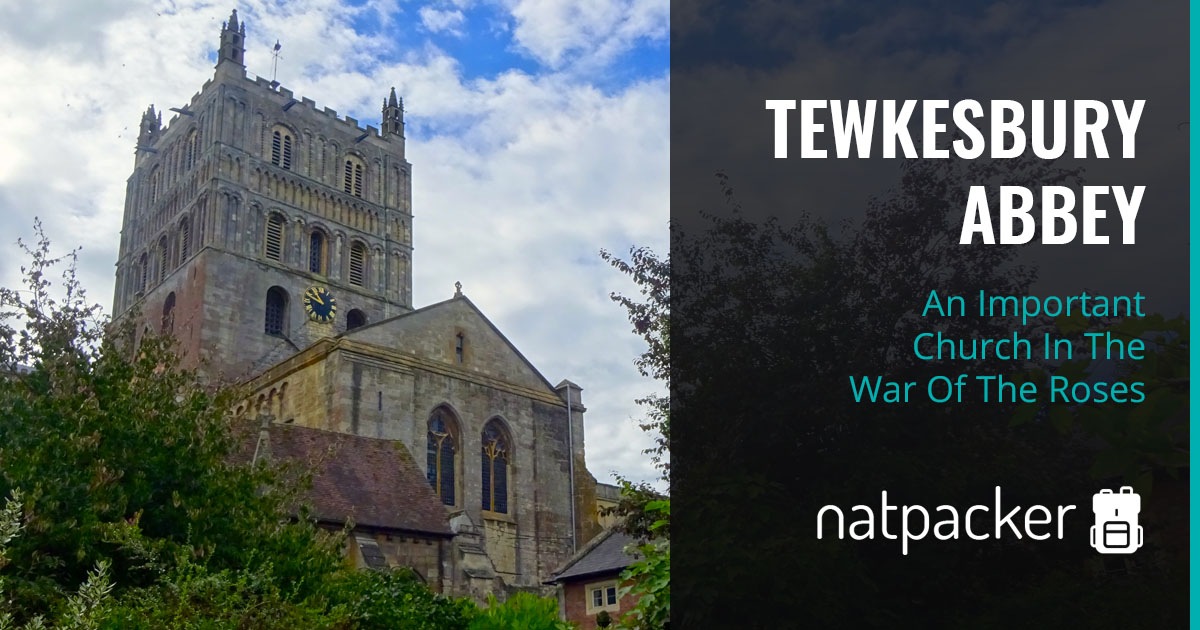