This is the first part of three in my Mini Adventure that took me to Tewkesbury and Combe Martin. My parents had rented a cottage for a week, but me and Dave could only go for a long weekend. As the cottage was rented from Saturday to Saturday, we decided to start the 4-5 hour journey on the Friday evening, and stop somewhere for the night. It was a rash decision and we managed (on the Friday) to book a night in Tewksbury.

Arriving in Tewkesbury at about 8pm on the Friday night we found the hotel fairly easily. All we did was pull up on the High Street and walk a little further down the street to the Tudor House Hotel. We were shown to our room and given directions to the small park (which we just managed to squeeze the car into). 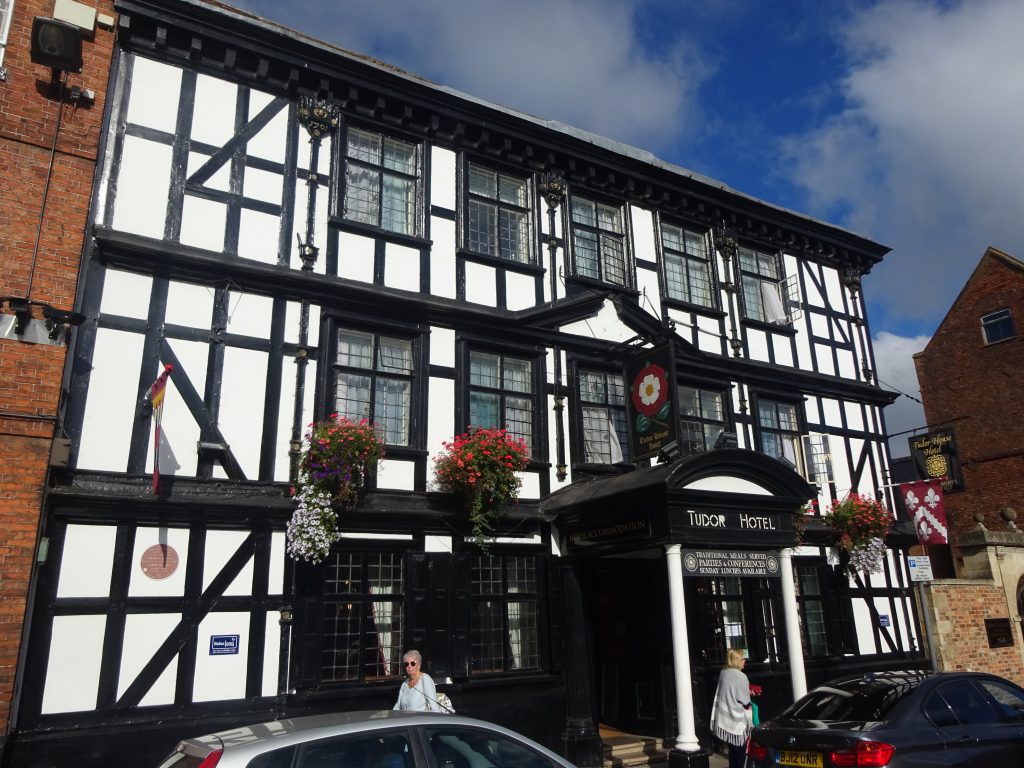 Considering we found this hotel last minute, it seemed really nice. The room was a nice size and there was plenty of tea and coffee. We soon discovered that we were in the disabled room though (not that this matters) upon entering the bathroom! The only bad part about this room was that it was on the ground floor (for obvious reasons) and I didn’t have time to explore the hotel fully, as it looked pretty grand. 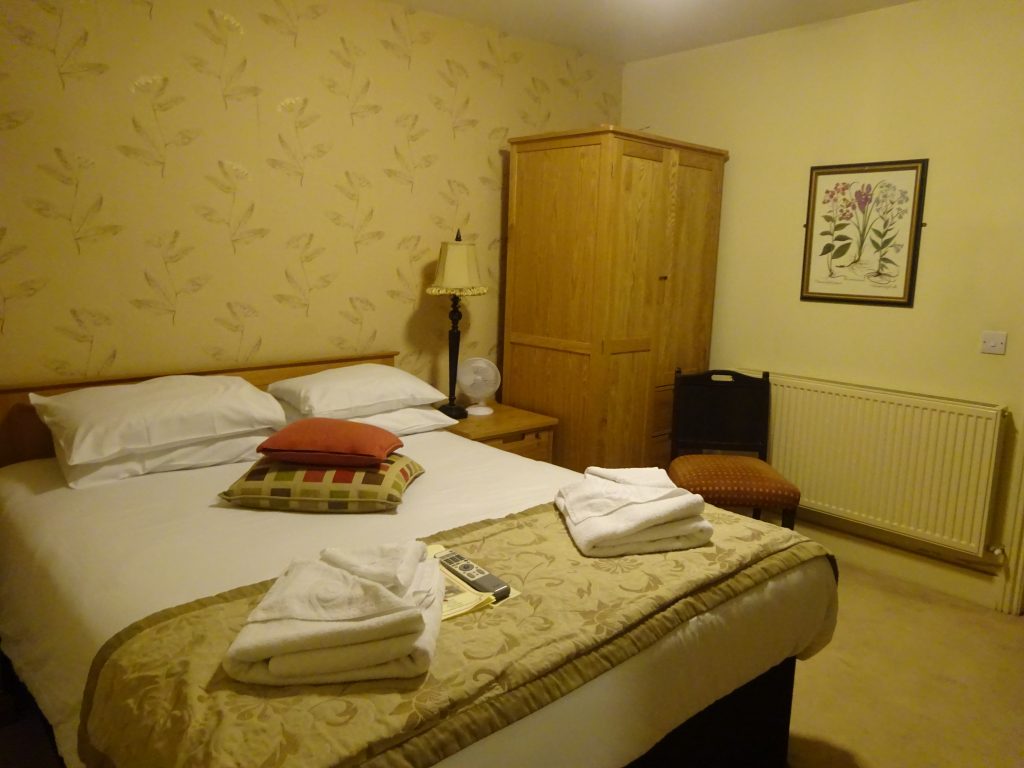 Our Room At The Tudor House Hotel

Looking through the information pack I found it had tales of the hotel in it. It told of Tewkesbury and ghost stories of the hotel. We were actually looking if there was a menu for the pub part of the hotel, but I got a little distracted…

We both decided to eat in the pub part of the hotel and after getting changed we headed over. Unfortunately it was just past 9pm so they had literally just stopped serving food! We asked if there was anywhere else and the bar staff were doubtful we’d find anything! Oh dear…

So we went for a wander. With the small hope of finding food, but with the back up plan of the chippie round the corner! The walk went downhill very quickly as lovely man shouted sexist comments at me as we walked past a takeaway. We began to wonder what sort of town we were staying in…

We found the first restaurant that wasn’t a curry house (we’d had a curry a few days before and didn’t fancy it) and went in. It turned out that we had stumbled into Prezzo (which I didn’t realise was a chain). Prezzo is a little weird, it has a very clinical decor and feel to it, as if they’re expecting to operate as well as serve food. A little too clinical for a restaurant in my opinion.

I ordered ‘Pappardelle With Wild Mushrooms’, Dave had a Calzone and we shared a bottle of wine. The meals came and I found mine to be a little bland, but I still enjoyed it. Just think I should’ve had the calzone… I love mushrooms, but when mushrooms are pretty much the only thing on the pasta, it gets a little boring! 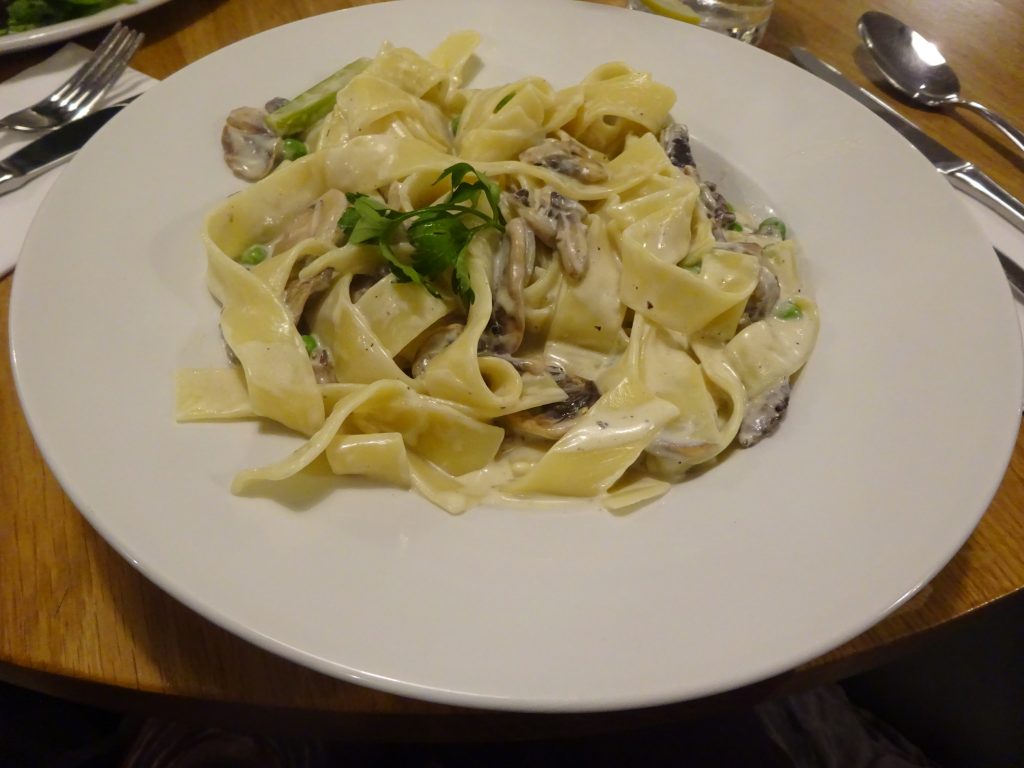 We asked for the bill and were in for a shock… It was much cheaper than we’d anticipated!

A little nervous, as our walk through the streets earlier wasn’t the best experience, we headed out onto the streets again. Whilst eating, Dave had remembered that there was a pub on an island on the river. We looked it up and it was on the other side of the town, but as it was on an island, we couldn’t let a walk stop us! So we headed straight over.

The pub was called the ‘Boathouse’ and as soon as we got there the pair of us wished we’d thought of it earlier. We should’ve eaten here (if they were still serving past 9pm). Oh well.

Although it looked almost posh and more like a restaurant from the outside, it was a quirky place. Comfy sofas, a piano. I had a cider and we sat down on one of the sofas. As we drank and chatted, we didn’t realise how late it was getting. Soon it was just us two left! So we finished our drinks and headed out. 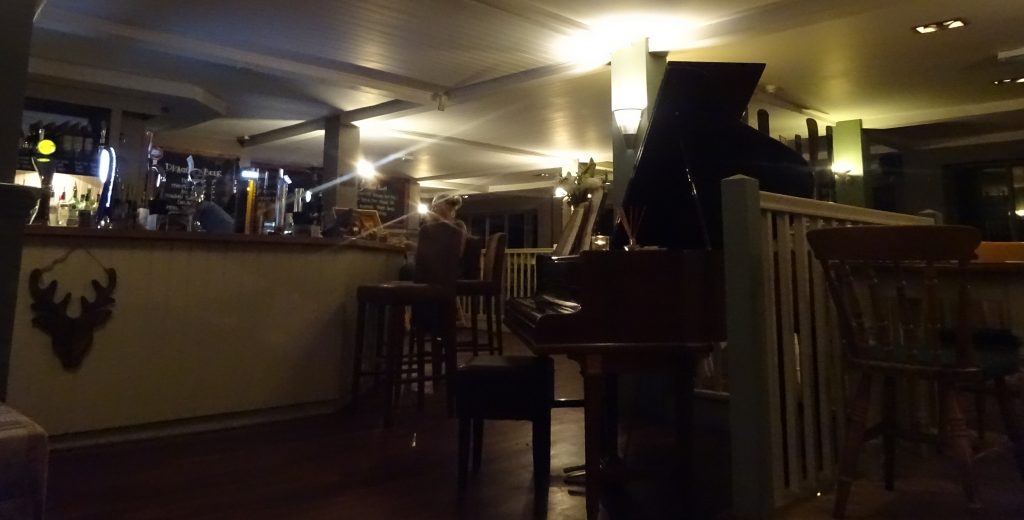 It was getting past 11pm by this point, so we tried the next pub. This turned out to be ‘Ye Olde Black Bear’ and it was still serving. We’d decided to have one more drink, as it was probably nearly last orders anyway, before heading back to the hotel. This plan did not happen!

In Ye Olde Black Bear it was karaoke night and they were open until early morning. We’d accidentally found what we presume was a student pub, not the night we expected! But brilliant fun! We stayed much longer than we’d planned. In the pool room I noticed Tudor flowers on the ceiling and then that there were posters with information about the pub.

We started talking to a couple of guys then. The bar staff actually had to ask us to leave as we were chatting for so long and I presume they wanted to go home! So we stood outside chatting for at least another half an hour! One of the guys was going to Australia and as we mentioned we’d been, well you can guess how the conversation went! We also asked them what we must see of Tewkesbury the next day!

So the night started out not great, but turned out to be brilliant fun! Not quite what we’d planned or expected!

A Couple Of Houses And A Secret Garden

The next morning we went for breakfast. It was an alright breakfast, not the best hotel breakfast I’ve had, but certainly not the worst! Then we packed up and went to explore a little of Tewkesbury before heading off to meet my parents.

I’d read about the John Moore Museum and wanted to visit. We started walking in the direction that I thought it was. But we weren’t sure. Luckily we found the tourist information! So we headed in and asked. Well Dave asked “Where did John Moore live?” and we were told that he actually live in the building that is now the Tudor House Hotel – awesome! We’d stayed in his house! Luckily they knew what Dave actually meant and we were headed in the correct direction to begin with!

We found the Museum and went in. It was £3.50 entry fee, and you got quite a bit for your money! The museum was small, but pretty cool, although there was a lot to read. John Moore was a naturalist, so there was information local wildlife, his life and taxidermy. But far too much to read! Personally I feel the museum needs a little TLC, as it seems a bit cramped and a bit of an ‘information overload’.

With the entrance fee you also get access to the Merchant’s House. So the receptionist took us out back and led us a few doors down to this museum. I liked this museum. Turns out people still live in these cottages and they are Grade II (?) listed, so they can’t get double glazing etc. The stairs in this house were the original stairs, and they really felt old! They were actually quite scary to climb! You could feel them strain under you! 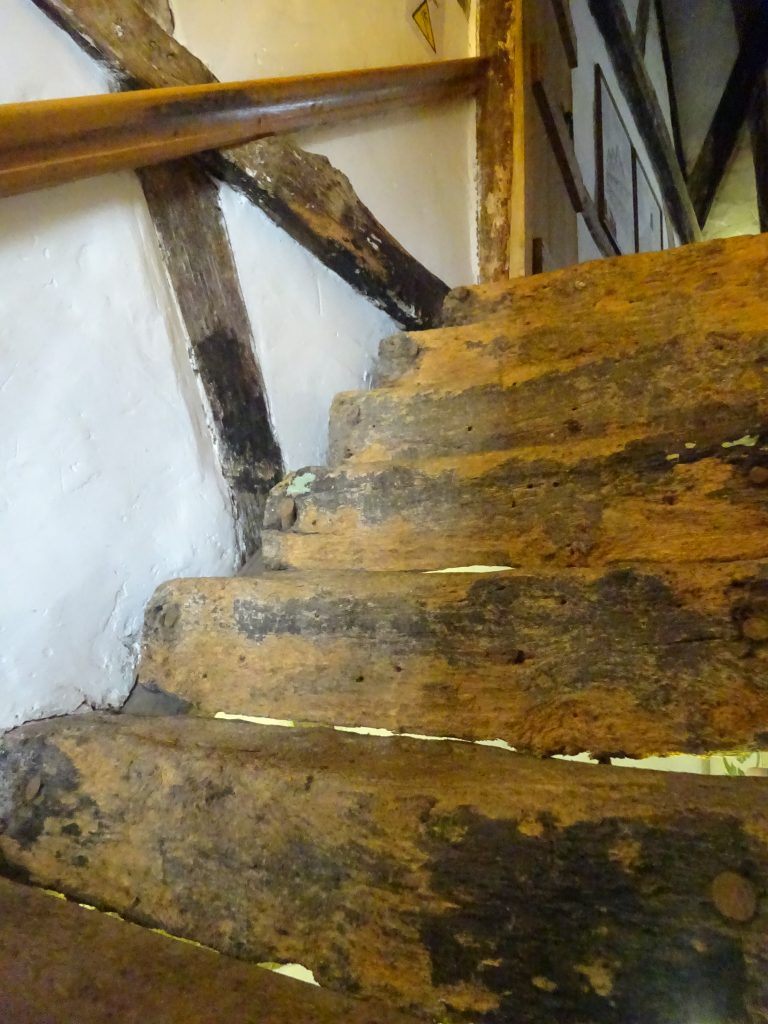 Original Stairs In The Merchants House

After the exploration of the Merchant’s House, the receptionist pointed us in the direction of the Secret Garden. Really loved this part. There was a great view of the Abbey and the garden was very pretty. With plenty of flowers still in bloom and birds flitting here and there it is nice place to relax and ‘escape’. It’s only small, but lovely! 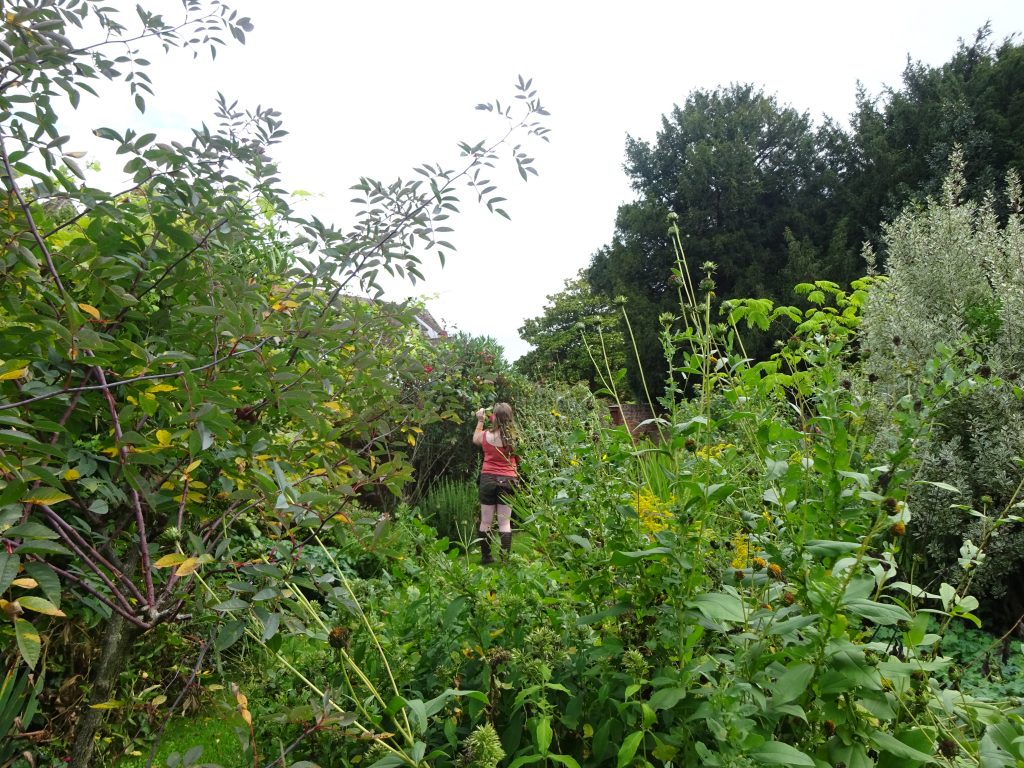 In The Secret Garden

The Abbey And A Mystery

We left the peace of the garden and headed over to the Abbey, as we had to see it before heading off. The Abbey is in fairly decent sized grounds. There were a fee posters stating that the Abbey was a Pokestop…

When we got to the Abbey we made a donation (no entry fee, but asking for donations). I felt that their suggested donation of £5 each is a little steep, as Southwark in London was only £1 and their leaflet had much more information on it! Finding a member of staff I asked if taking pictures was ok – he looked at me as if I’d fell out of a tree! I guess most people don’t ask… But I always do in places like this. 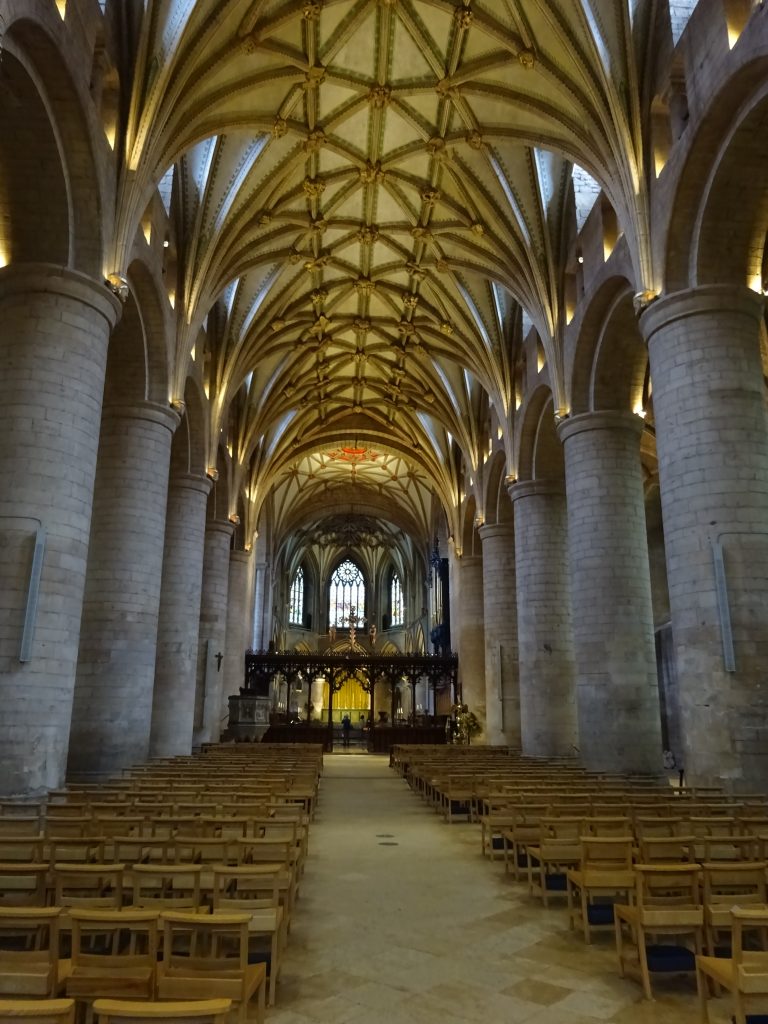 Despite the leaflet not being great, the Abbey itself was beautiful. I just feel like I didn’t learn anything about it! We walked around and I really liked a statue of Mary. It wasn’t massive, but it really was spectacular. About three quarters round, we came up to the shop, so had a quick nosey. As we were nosying we noticed on some postcards photos of horse statues on a roundabout. We became quite curious about this… 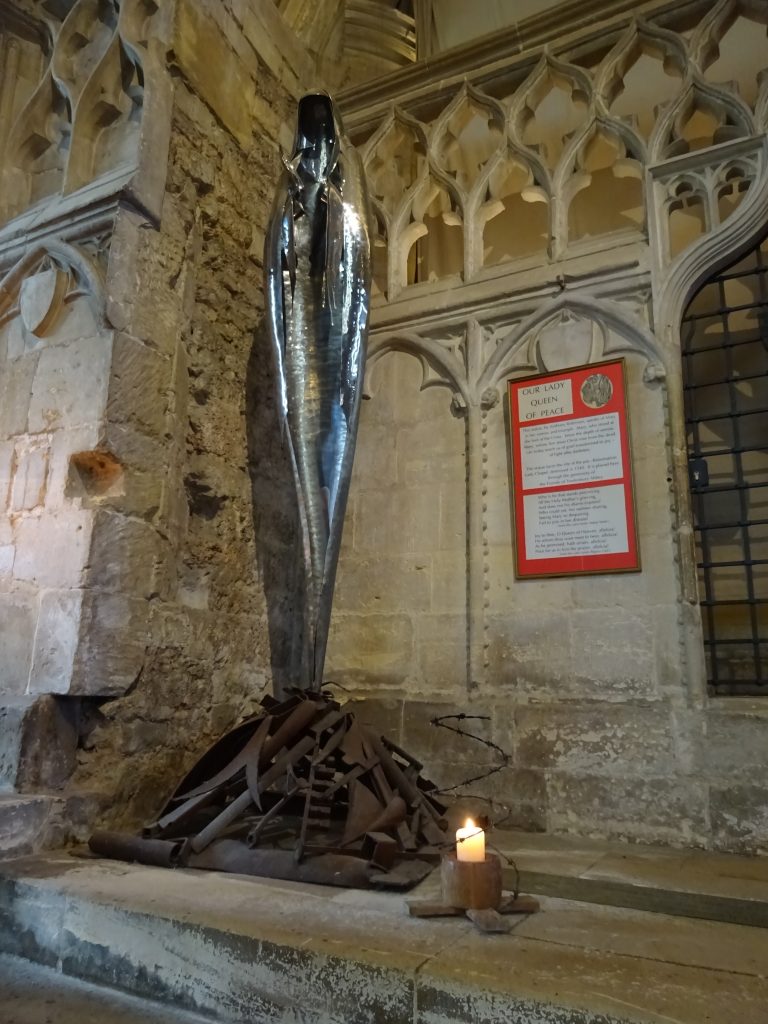 Sculpture Of Mary Inside Tewkesbury Abbey

Exiting the shop we noticed a Bagpiping Angel – I’m sure I’ve been told there are 3 in the UK (note, must look this up), so we have seen two! Just need to find the last one! There’s one in St Giles Kirk, Edinburgh which was the first that we saw. We didn’t expect to find this one here! 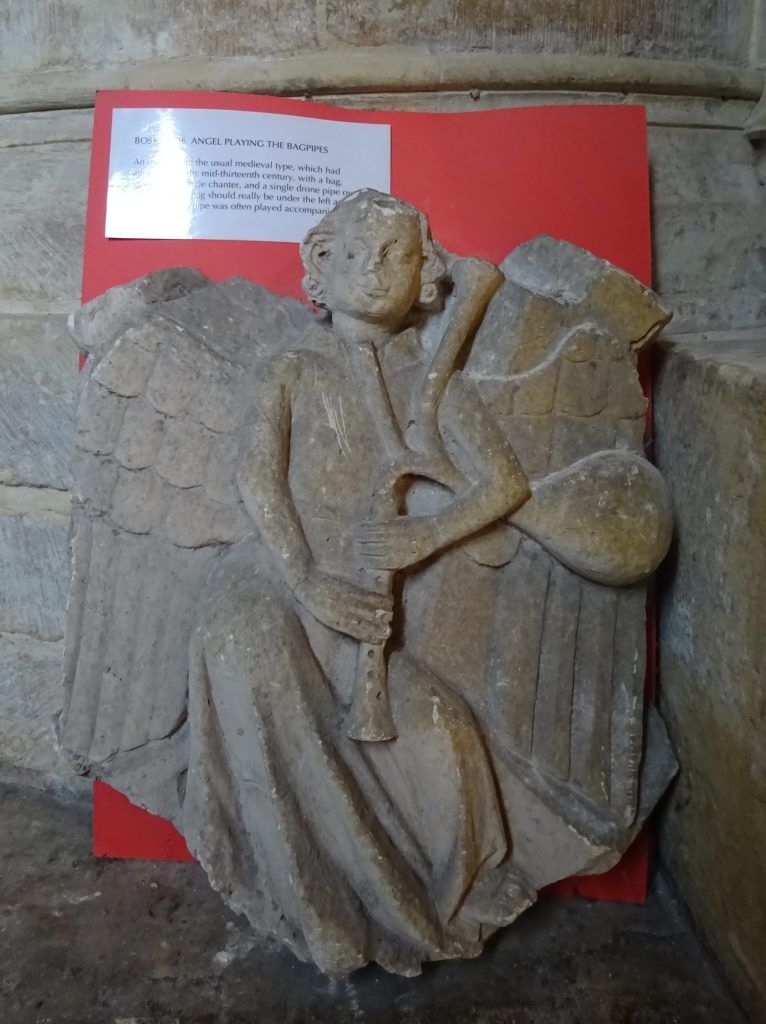 As we finished our loop we came across a staff member and asked him about the horses on a roundabout that we’d seen the pictures of. He gave us directions, which were pretty simple and seemed not too far, so we decided to see if we could find them.

We decided we had time to walk, so set off in the direction he had said. We headed out of Tewkesbury and along the way we noticed houses with banners, and they tended to have information about the banners on their gates! They are banners of people that participated in the Battle of Tewksbury.

We arrived at the roundabout just as we were thinking that we may have to go back and get the car. The statues are called ‘The Arrival – Victor And Vanquished’ and commemorate the Battle of Tewkesbury. One horse is riderless (I guess that one is ‘Vanquished’). They are really cool and well worth a look if you are in Tewkesbury. Although it can be hard to get a picture as the roundabout is quite busy!

The Arrival – Victor And Vanquished

A Detour Or Two

After admiring ‘The Arrival’ we headed back into town, as it was time to head off. However, we may have got a little distracted! On the way to the roundabout we had noticed a garden entrance, and now we noticed another entrance, so decided to head in. This was Victoria Gardens. Once again they were quite small, but very pretty. What the gardens lack in size in Tewkesbury they make up for in how pretty they are! We sat down on a bench for a while and just admired them! As we headed out of the gardens, we noticed a bridge. I stated that it must be the ‘Ham’ which I’d read about in the John Moores Museum. This is basically a community grazing space. So we headed over.

After crossing the bridge there was an information sign, which we checked and it turned out we could pretty much get back to the hotel by following the edge of the Ham. So we decided to do this. The Ham is a SSSI, which always makes me happy. And there were some sheep on it, but they kept well away.

It was a nice walk, but over too quickly and then it was time to get in the car and head to Combe Martin to meet my parents. And that adventure is in Part 2.

Want to visit Tewkesbury? Why not check out accommodation on Tripadvisor? 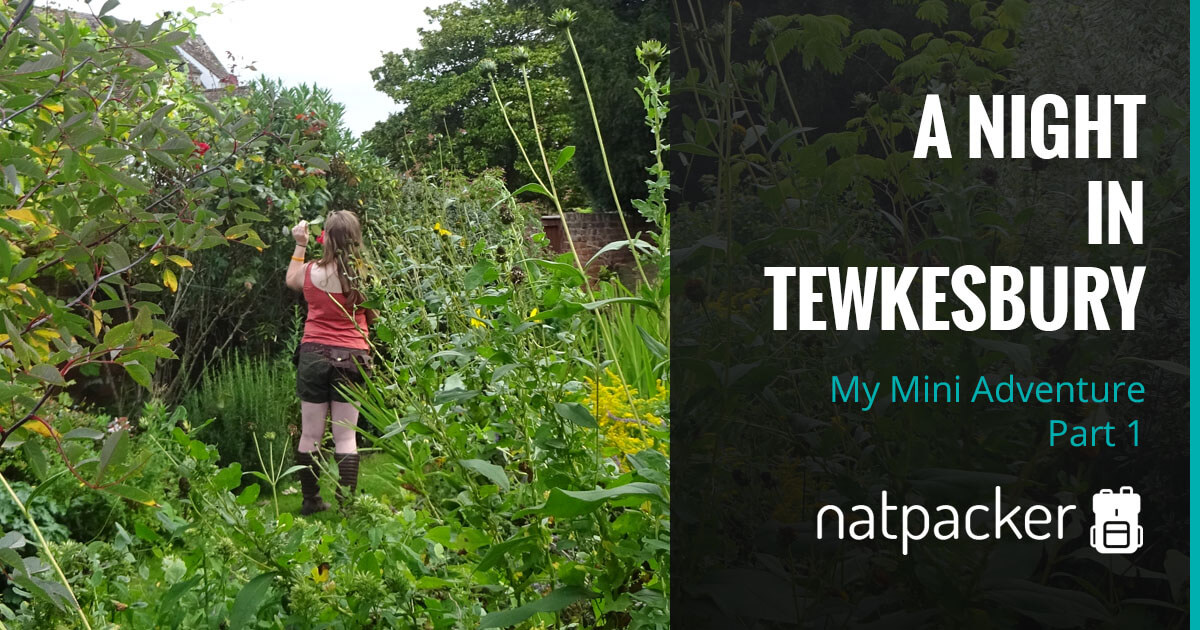