This is the third and final part of My Mini Adventure to Tewkesbury and Combe Martin. This covers the events and stop-offs on the road trip home. If you missed the other parts follow the links below to previous sections:

If you don’t need to go back, here is the final part of the adventure!

We got up on our final day at the Coastal Path Cottage in Combe Martin, well final morning really. As Mum cooked her usual brilliant full breakfast me and Dave planned our route back. We wanted to visit Wellington Monument and Sheppy’s, after talking to the couple at the pub the day before. But these were both about an hour away, so we planned a few options for further along the drive.

The day was overcast and didn’t look like it was going to cheer up at all. Great. At least we’d be in the car for most of the day…

After breakfast, we said goodbye to my parents and set off. My parents were staying for five more nights, but Dave didn’t have the holidays spare. Oh well!

An hour into the drive we were nearing Wellington Monument. We drove past were it was meant to be, turned around and drove past again. We had a bit of difficulty… So we pulled over and had a look on the National Trust App (now we actually have smart phones, I will admit they are handy). We were definitely on the correct road, although I had not seen a single sign. And the point on the map that was pointed at was actually a farm. So we went back up the road. At the very last moment I noticed a sign for the car park (literally on the car park) and swung in.

Result! We’d found it. Well, we’d found the car park! From there it was only a short walk to the Monument itself. The weather was still miserable, which maybe affected my opinion, as in all honesty I was a little disappointed. Especially when I read on the information board that it requires expensive repair work every 10 – 15 years. Maybe I should go back on a nicer day! There was also a walk around, that we decided not to do, partly due to the weather and partly because of time. 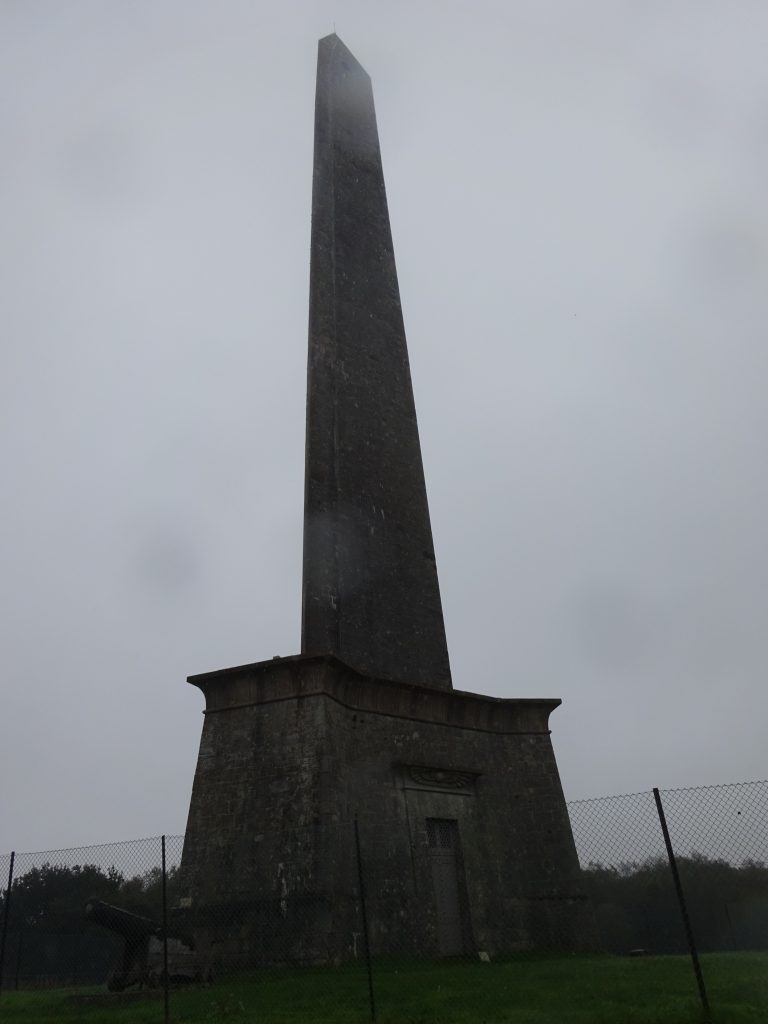 Wellington Monument – In The Rain!

A Museum, A Donkey And An Orchard

On next stop on our journey wasn’t too far away – Sheppy’s. I’m not sure what to call it. Breweries make beer, distilleries make spirits, so what do you call somewhere that makes cider? Is it a cidery?

Anyway, back to the story. We arrived and it was a building site. It looks like they were in the middle of a massive revamp of the museum. So we went into the shop and there was an area that looked like the museum stuff had been thrown in, but in a kind of display! It was basically just a lot of old tools and equipment with some information. The video that was played before this bit was good though. I feel that I definitely need to go back once this is finished as on this day there were no tours and I bet the new museum will be worth a look (plus I love Sheppy’s)! 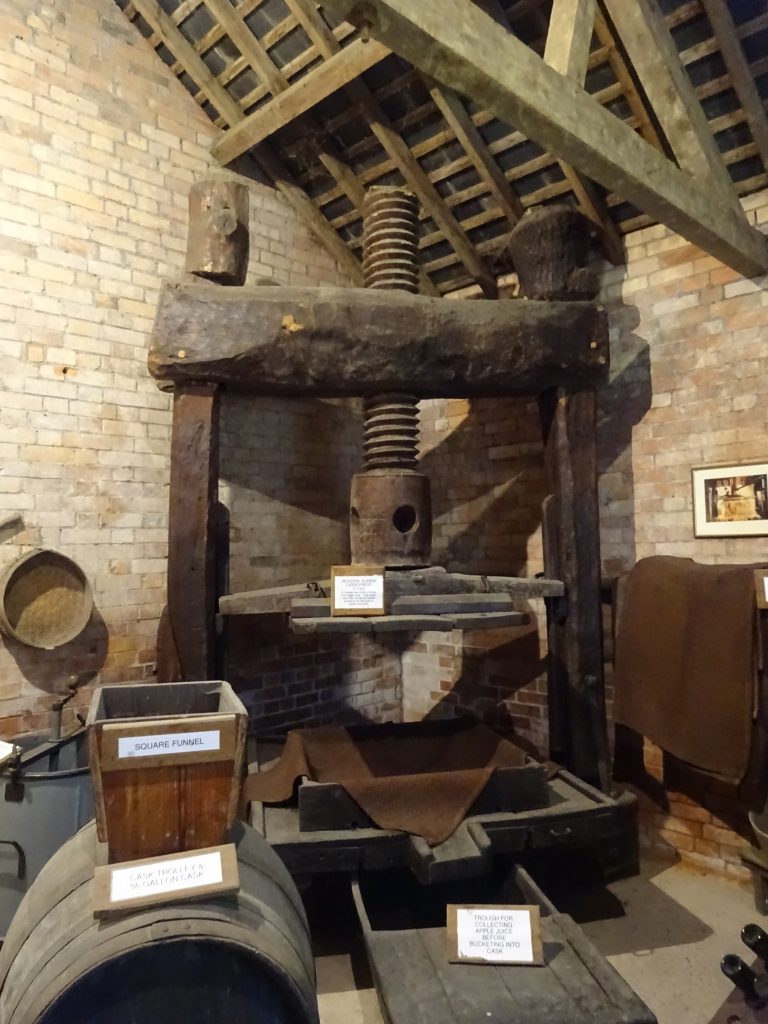 So we went back to the shop and had a browse. And of course, some cider had to be bought! We got a 4 pint flagon of medium scrumpy. As we bought it the staff told us that it has to be drunk within two weeks, or it will go off! So don’t save it! 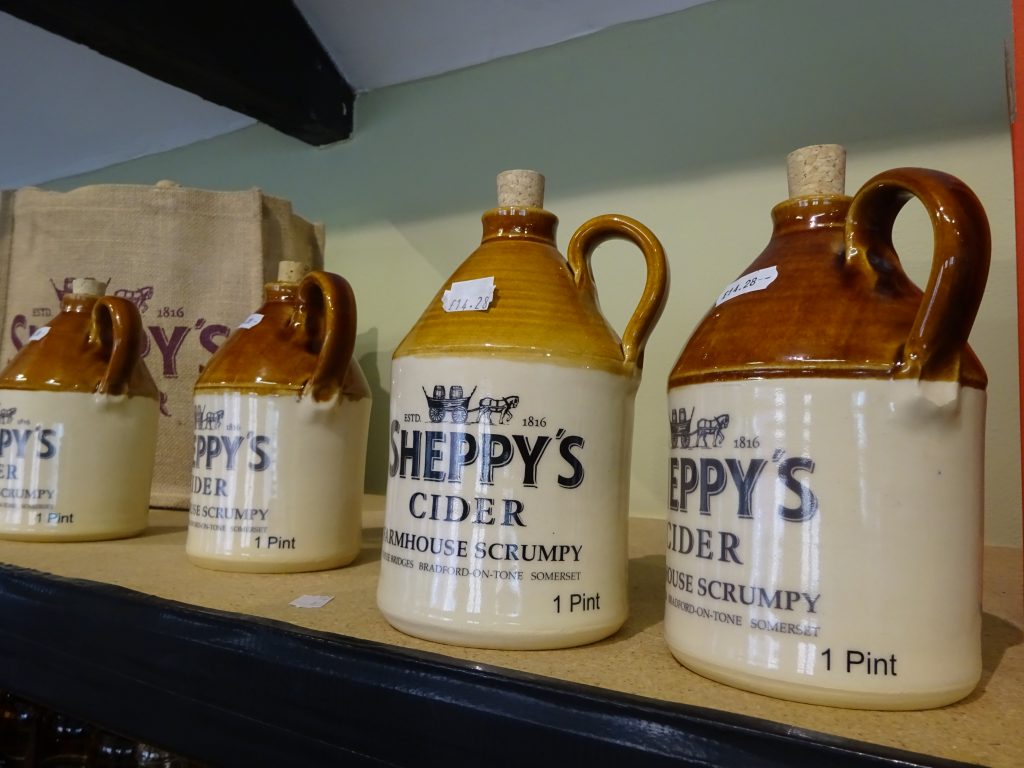 We went back outside and although it was still overcast it was not raining, so I wanted to go to the Orchards. On the way I made a new friend. There was a couple of donkeys and a horse in a field. One of the donkeys was lay down near the fence, as we approached he got up for a stroke. The horse also came over to say hello. Although they both soon realised that we had no food (nor would we give them any anyway) and got bored! 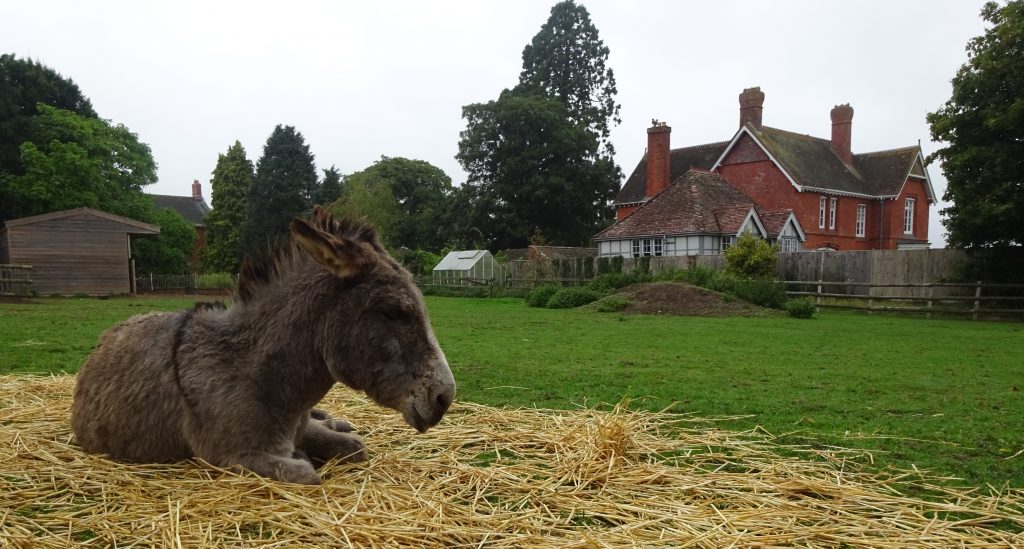 We carried on to the orchard and had a little walk round. They were pretty and the apples looked almost ready. Then we headed back and as we went past the field again, the donkey came over and stuck his head through the fence! But as soon as one of us went to stroke him he started playing ‘hard to get’. I think he was still hoping for some food! 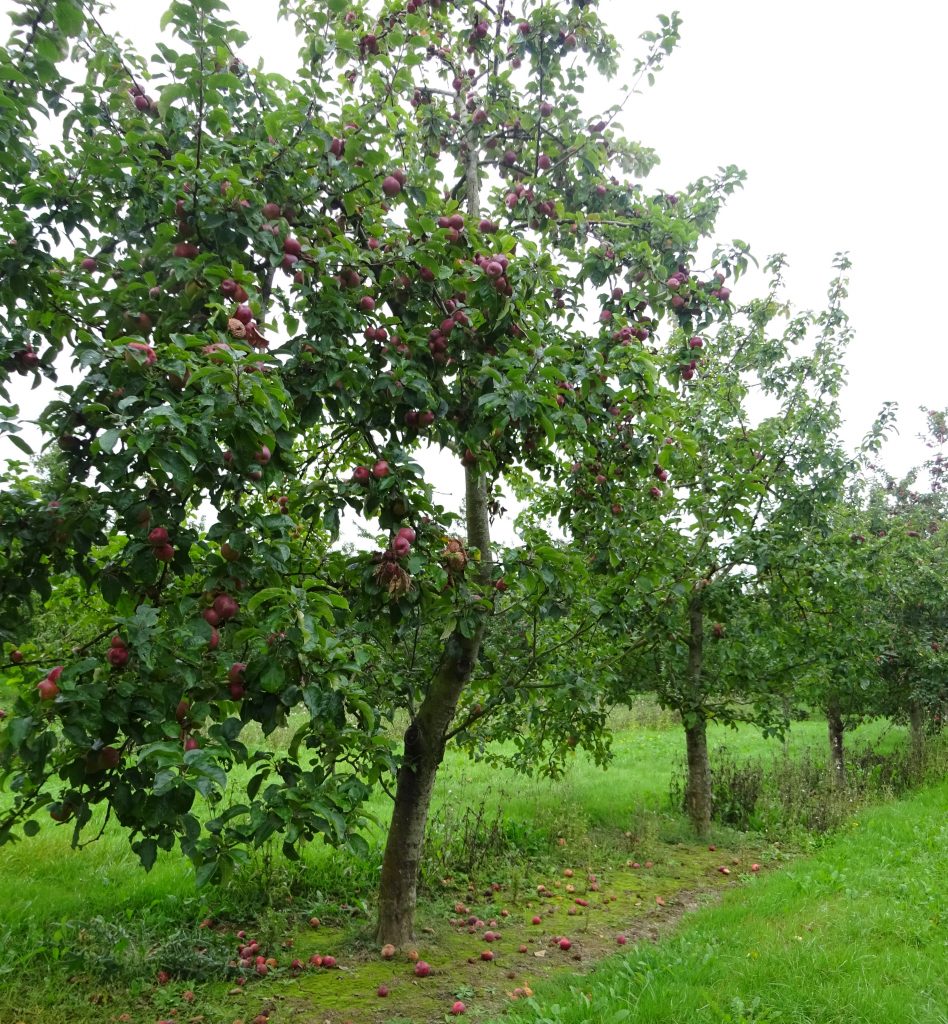 A Step Into The Past

We decided to stop at Blaise Hamlet, another National Trust site. If we thought we had difficulty finding Wellington Monument, that was nothing compared to finding Blaise Hamlet! We knew we were on the right road as there was a sign saying “Blaise Hamlet X yards” (think it was 150 yards, but no sure). So after driving down this road a few times, we decided to pull up and try on foot.

We found a path through a field, and decided it may be the way. It wasn’t. We got completely lost! So confused! We were using the App, and it seemed to be pointing us in the direction, but it wasn’t. I have realised that the App, even the postcodes it gives, points to the actual centre of the site. Not the car park or entrance, which would probably be more useful!

We got back on the road and decided to walk back along it, one last attempt at finding the Hamlet. And guess what? We actually stumbled upon it! There is a wall with a little gate that leads into the Hamlet!

And it was worth it. The hamlet has nine old cottages, designed in 1809 by John Nash, around a central green. It is like a little piece of history. The cottages are occupied and well maintained. It is such a pretty area. I would love to live there, but I’d be useless at maintaining a cottage and its garden to such standards! I’d ruin it! 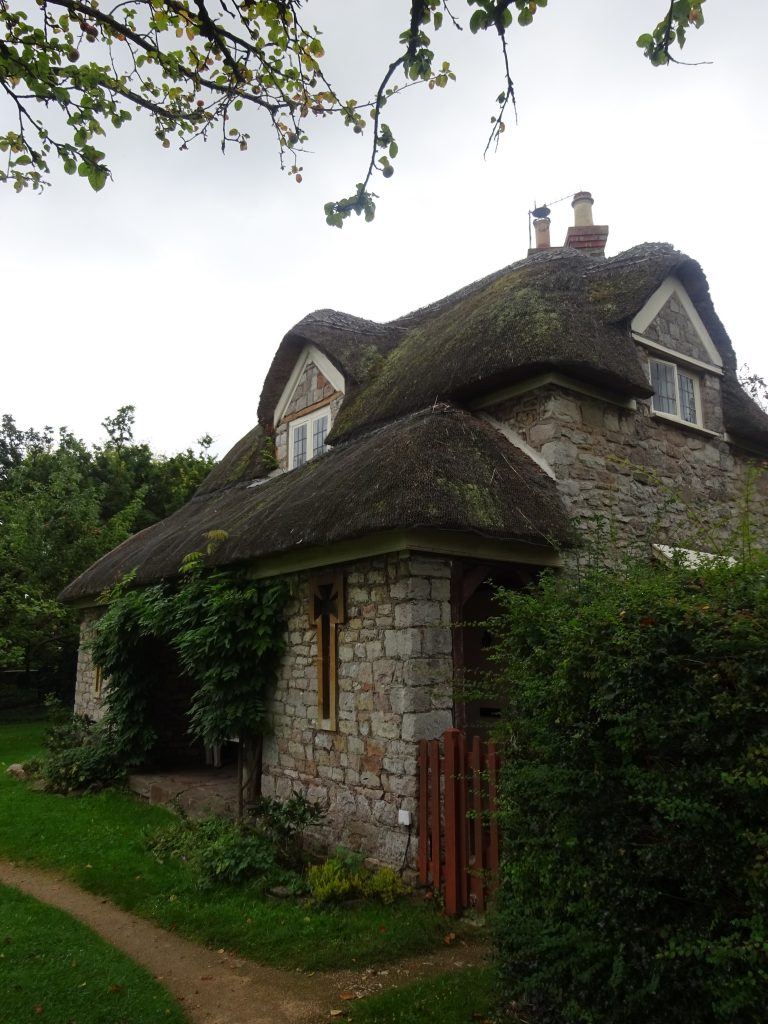 Not Ready To Leave

We weren’t looking forward to getting back in the car. But as we were driving, I’d noticed on the next road a car park for ‘Blaise Castle’. So we decided to explore some more.

We found the Blaise Estate easily enough, and then started following the sign to the castle. I say sign as that’s all there was. One sign. Into the woods. Then none.

We followed the main path and soon began to think that we should’ve popped into the cafe first to see if they had a map. But it was too late now! We came to a crossroad, with no sign! Luckily there was a local dog walker, who told us where to go. She also told us that most people get to that crossroad and give up! We’d gone past the track to the castle (maybe a sign would be useful…) She told us to retrace our steps till we come across some steps on our left (would’ve been on the right as we first went past).

So, we retraced our steps and found the steps! We headed up and followed the path up – this felt ‘right’. And finally, we found the ‘castle’! It is the cutest little castle I have ever seen! And not even really a castle. The notice board even dubs it a “Sham Castle”. Which I found hilarious! 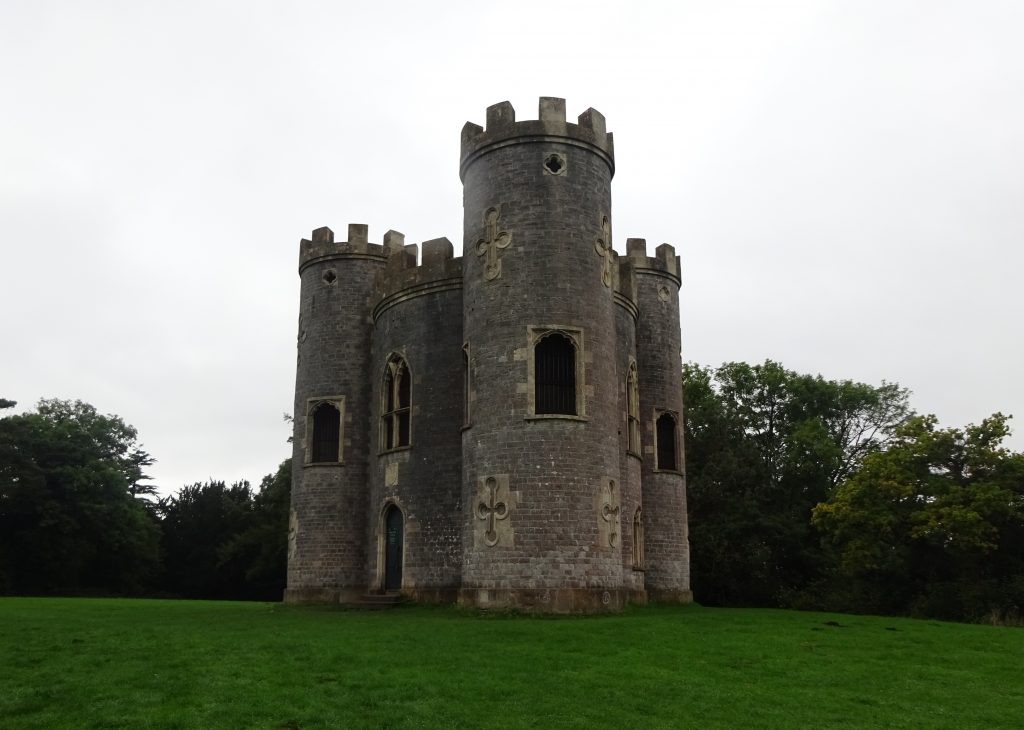 On the way back down we admired the viewpoints and came across a cave. I say cave, it was quite small, but still looked really cool. We then found a shortcut to the cafe – if only we’d known we’d have saved a lot of time! On seeing the cafe we decided that is was a good idea to use the facilities before heading off! Then we realised it was about 4.30pm, so decided to have an early tea, as we were likely to hit the Birmingham traffic if we left at that time. 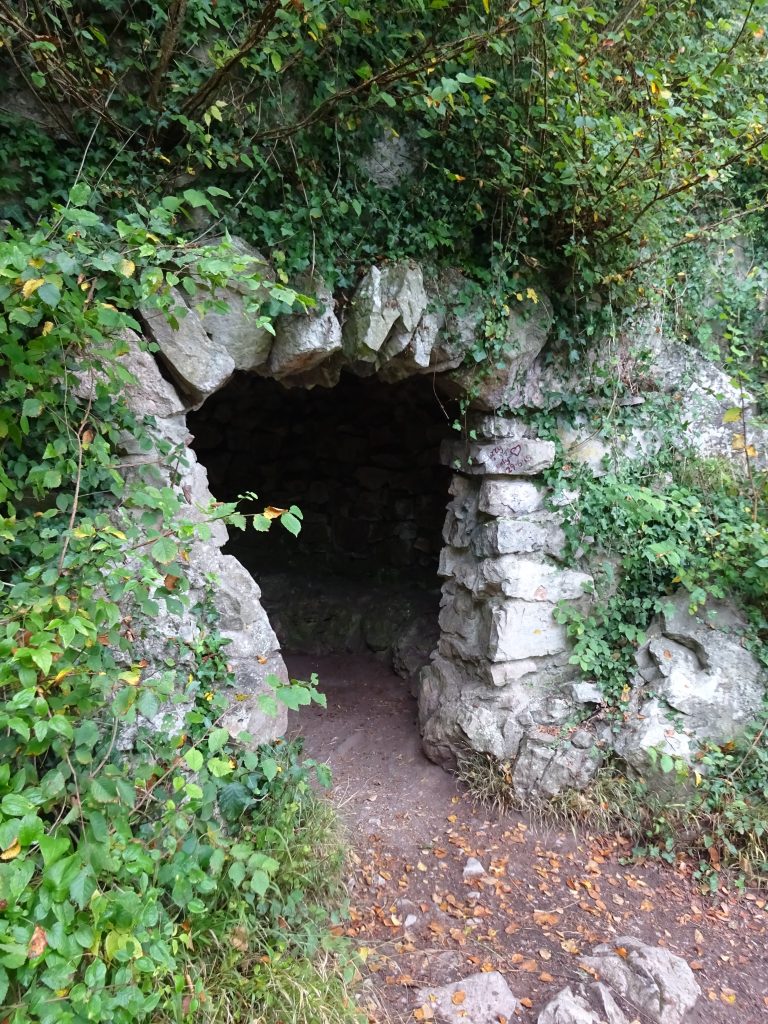 So we headed into the cafe – also found a leaflet with a map of the park, that would’ve been useful before! There wasn’t a lot on the menu, it was a very small cafe. But we both got a little excited about fishfingers and chips! So we ordered a portion each and a coffee. Sometimes you just have to revert back to your childhood!

We sat outside and waited for our food. As we were waiting I looked through the leaflet, which informed me that the cave we had come by was ‘Butchers Cave’ it is called so as the inside is tinged red. It also had information on a walk around the grounds and other caves that can be seen, I’m a little sad that we didn’t have the time to do the walk fully, I guess we’ll have to go back!

I don’t think I’ve enjoyed fishfingers and chips as much! Maybe it’s because I haven’t had the meal for years and it just has childhood memories attached to it. Maybe it seemed like a ‘naughty’ meal, or at least immature! But I really did enjoy them! 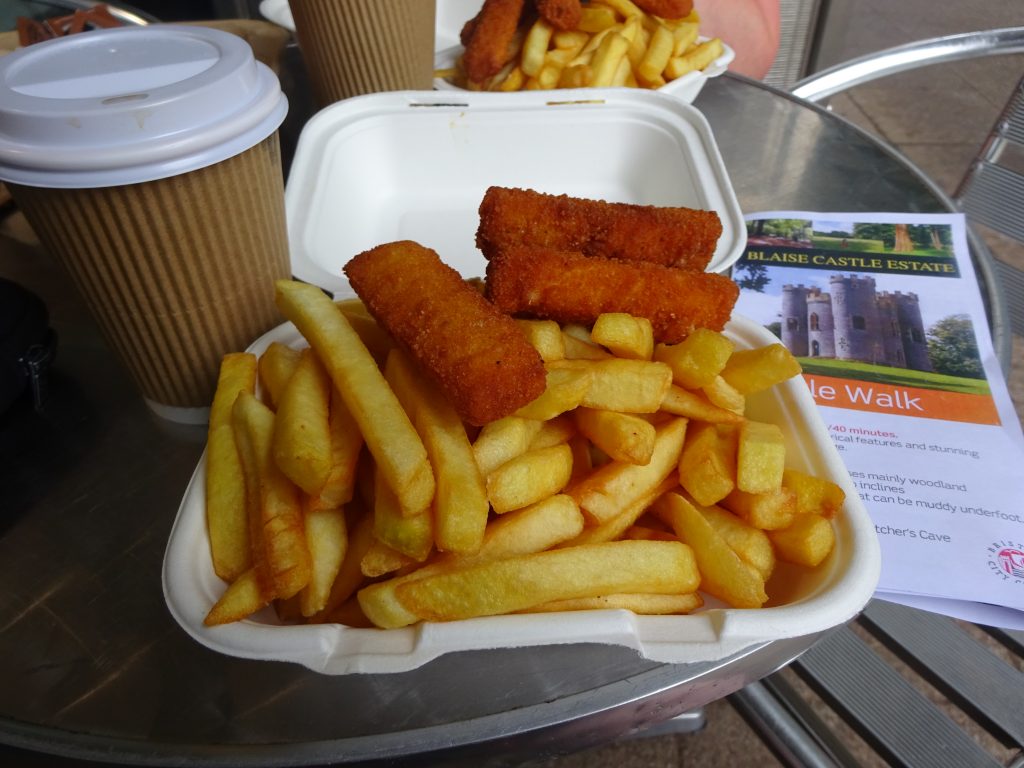 After eating we got back on the road and headed home. When we got there we decided as we only had two weeks to drink the cider we best crack on! And the scrumpy was lovely!

If you want to visit any of these places, check them and local accommodation out on Tripadvisor! 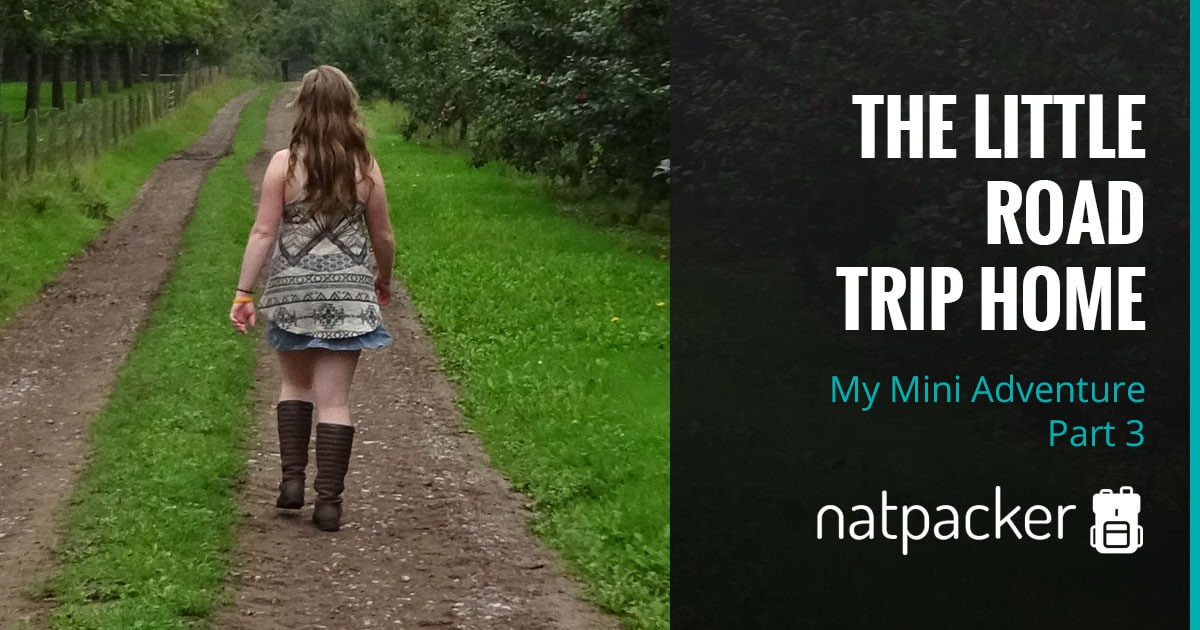