Here is the second instalment of My Mini Adventure to Tewkesbury and Combe Martin. This covers the arrival at Combe Martin and the next day when we walked a part of the Coastal Path. If you missed the first part, which told of mine and Dave’s adventures in Tewkesbury, click here to go back.

It was a few hours drive from Tewkesbury to Combe Martin, but my parents had told us that we couldn’t gain access to the cottage they’d rented until 4pm anyway. Me and Dave arrived at just after 4pm (we only drove past it once, but actually found it easier than we’d expected). And my parents pulled up just a couple of minutes after.

The cottage was called the Coastal Path Cottage and it was lovely. Our host showed us round and told us where to go to watch the sunset and look at the stars. We could get right out onto the moor from the garden and had beautiful coastal views. The cottage was in the middle of nowhere, which is why the views were so spectacular I guess!

The View From The Garden Of The Coastal Path Cottage

My parents then went to let the dogs out of the van, but the resident Bassett Hound had come to say hello to everyone! And he didn’t like the idea of going home when his owner tried to move him on! He did go home eventually and my parents let loose their two, big, bouncy, stupid (though I’m sure Mum will disagree if she reads this…) weimaraners, Tia and Morgan. The two mutts quickly made themselves at home! The Dogs Getting To Know The Coastal Path Cottage

We all joined the dogs with settling in and then set about decided what to do for tea. It was decided that we would get a  takeaway, as no one could be bothered to cook! The nearest takeaways were in Ilfracombe, so we rang ahead and me and Dave went to collect the food. 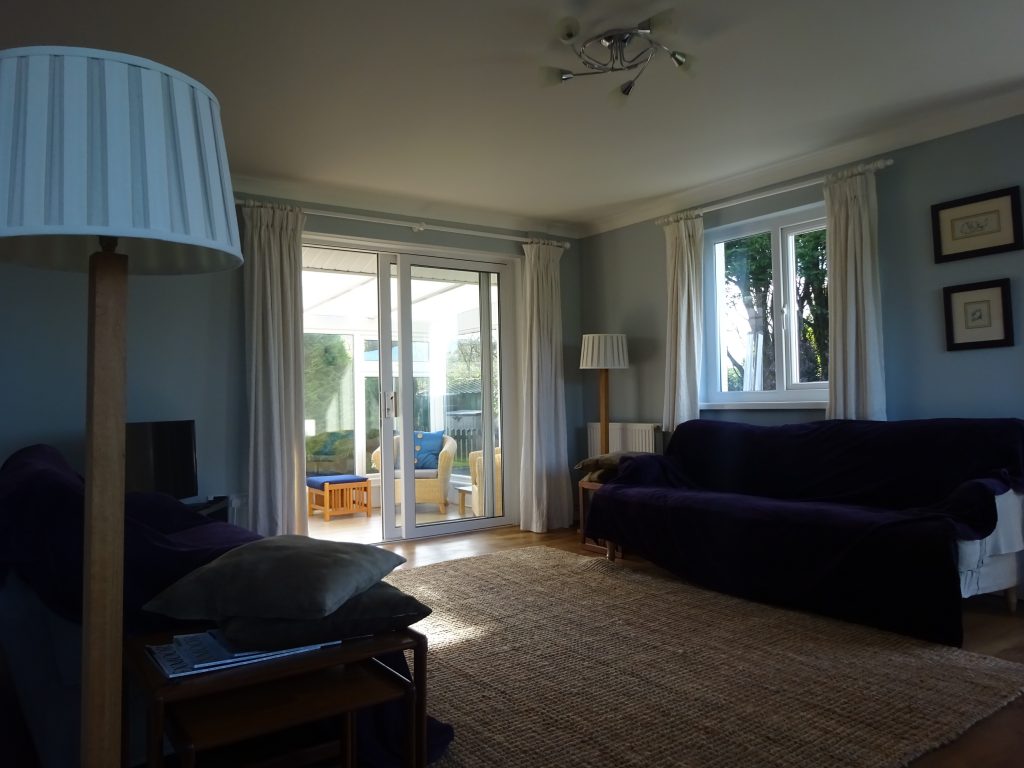 The Main Living Area At The Coastal Path Cottage

A Strange Statue And A Great Sunset

To be honest, me and Dave offered to collect the takeaway as we’d seen an awesome looking statue in a leaflet about Ilfracombe. And as we didn’t have long on this adventure, we thought we’d best make the most of it!

We arrived at Ilfracombe and found somewhere to park up. Then we headed to the harbour to see this statue. The statue is called ‘Verity’ and is of a pregnant woman holding a sword and the scales of justice. Very bizarre, but strangely awesome! 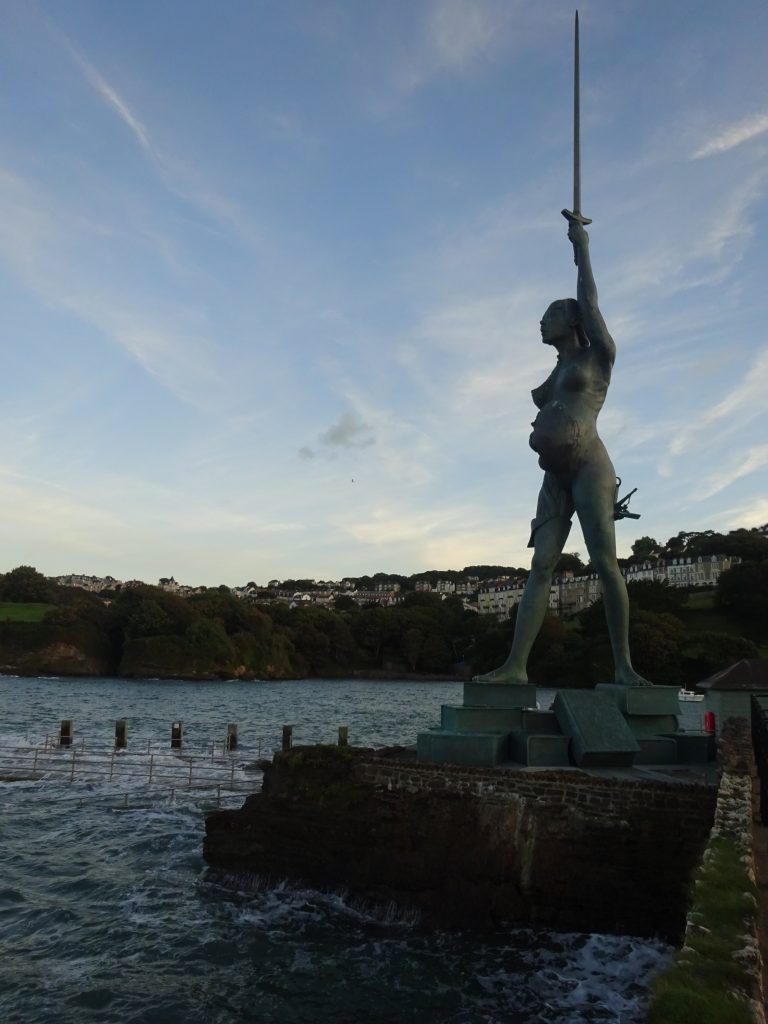 As we started heading to the takeaway we noticed the sunset. And an area where loads of photographers were setting up to photograph it! So we headed over to watch it. Unfortunately it was a little overcast, so not the most amazing sunset, but I love all sunsets regardless! We got back and we all enjoyed the meal. After eating me and Dave decided to go out on the moor to see if we could star gaze. But it was still too overcast so we had to admit defeat!

The Coastal Path To The Pub

The next day we were all up early, as we’d decided to use mine and Dave’s full day at the cottage walking the Coastal Path to the nearest pub, the Hunters Inn. This was about 3 miles away.

The dogs enjoyed running about (I was just glad bird breeding season was over…) and we all enjoyed the scenery. It wasn’t the easiest of walks, lots of ups and downs, especially for my mum who was still recovering from major spinal surgery that she’s had just under a year ago. So completing the walk was a massive achievement for her.

The path was really easy to follow, very well sign posted, although following the coast I guess you can’t go too wrong anyway! We met a few other walkers coming the opposite direction, one we spoke to and she was doing the whole southwest coastal path, which is 630 miles and takes a minimum of a month, though lots of walkers take two months so they have time to explore off the path. This is now on the list! 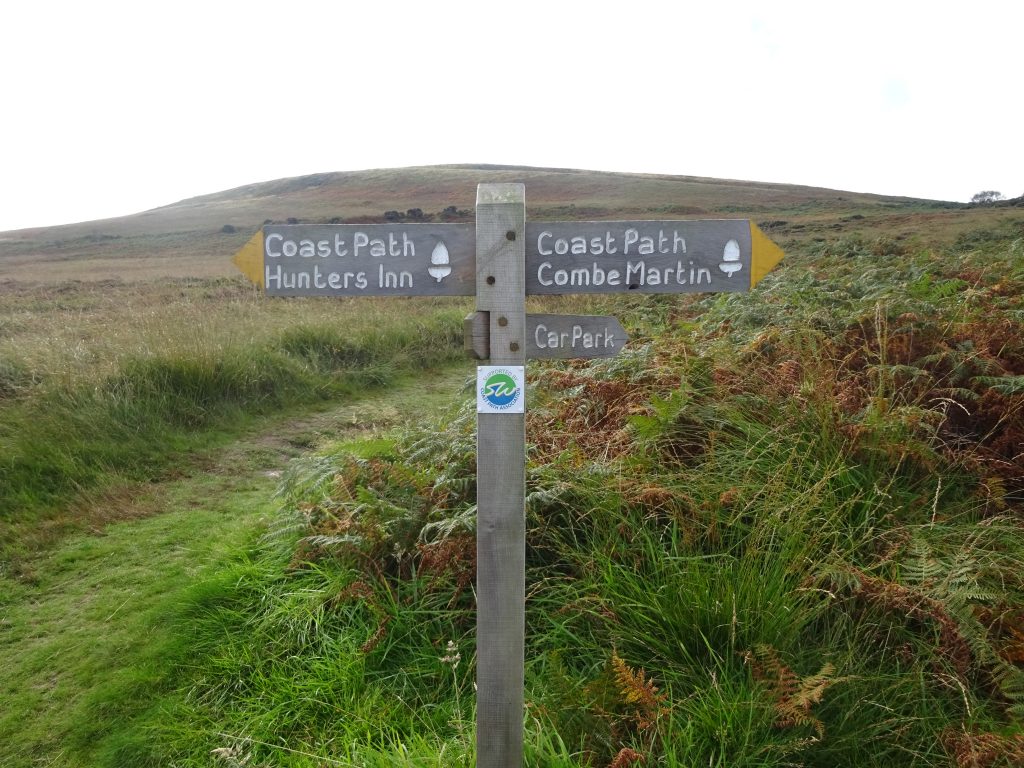 We had a minor drama on the walk! Morgan (the youngest of the dogs) was having a little too much fun. To the left of the path, towards the coast, became very steep, and he was still happily bounding up and down it. Suddenly it went quiet. We could neither see or hear him! Dave took a few steps down the slope and luckily spotted him! It seems that he couldn’t figure out the easiest way back up! But after seeing where we were he headed straight back up. Once he got to the path he lay down and was ready for a nap! He’d worn himself out getting up a very steep bit!

So the decision was made to keep the dogs on lead for the rest of the walk. As Morgan would’ve been stupid enough to go off exploring again! 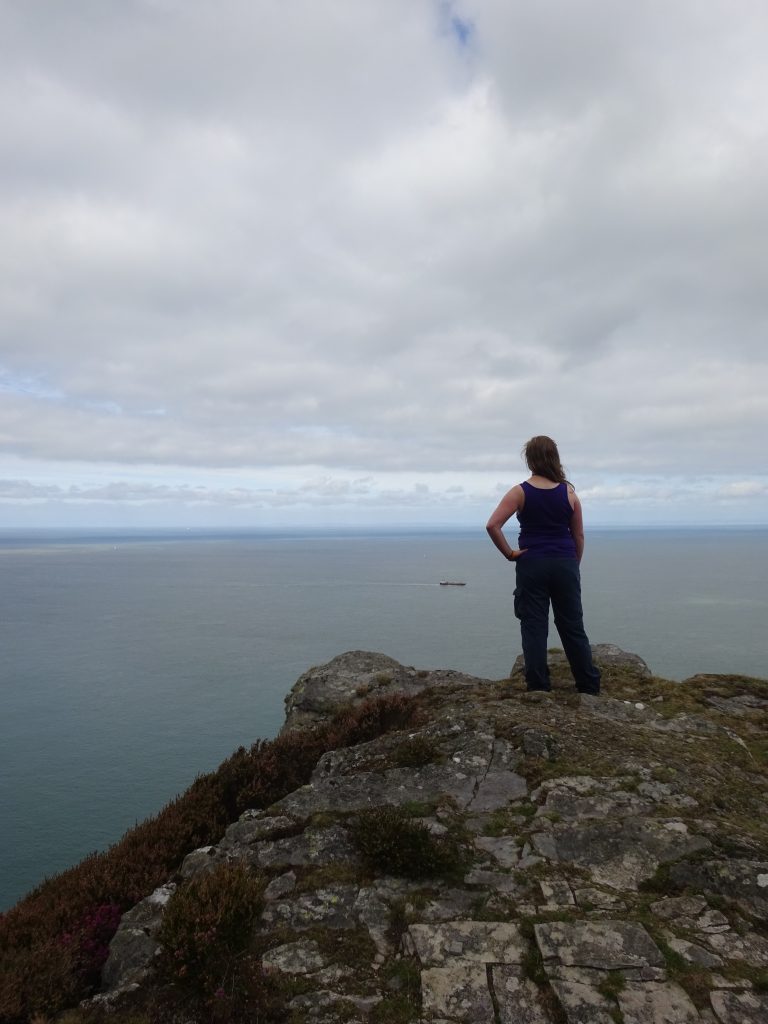 On The Coastal Path

The Pub And A Cove

The last part of the walk was quite a steep downhill slog! But we made it! We got to the Hunters Inn with two very tired dogs. And it was time for lunch. We found a table in the beer garden (away from the peafowl) and the dogs had their lunch as we looked over the menu. 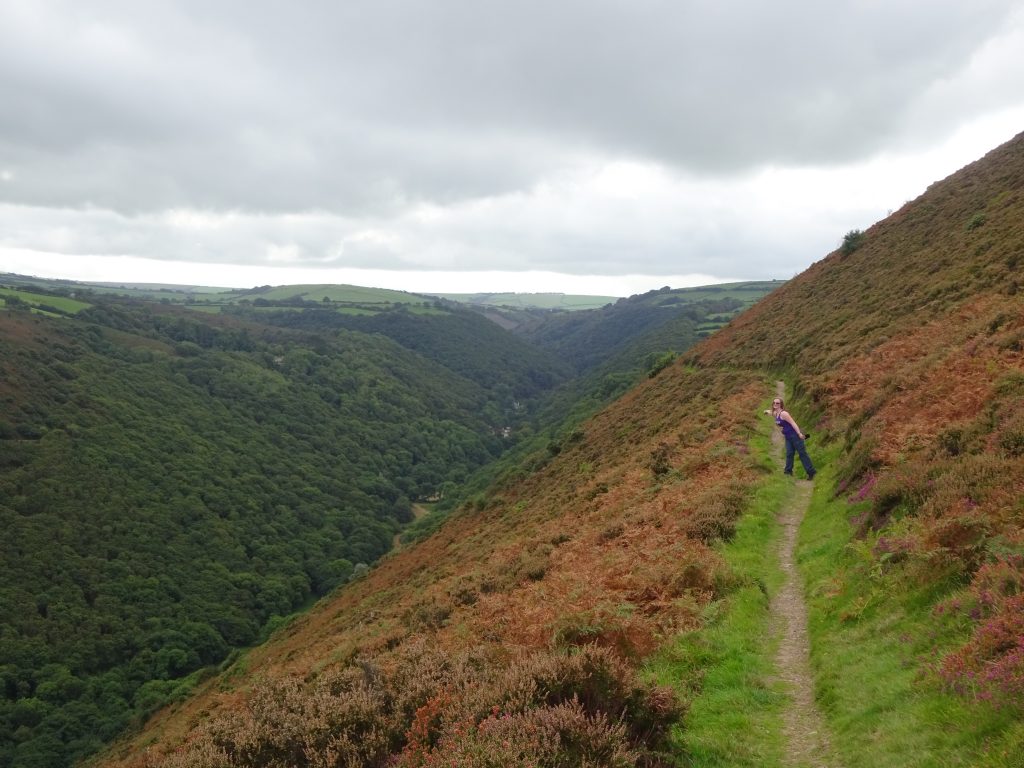 I Can See The Pub From Here!

I ordered the Somerset Pork and it was lovely. A minor negative though, due to there being building work the food could not be brought out to us, we had to take it out ourselves! Which I completely understand, it was just a bit a surprise! 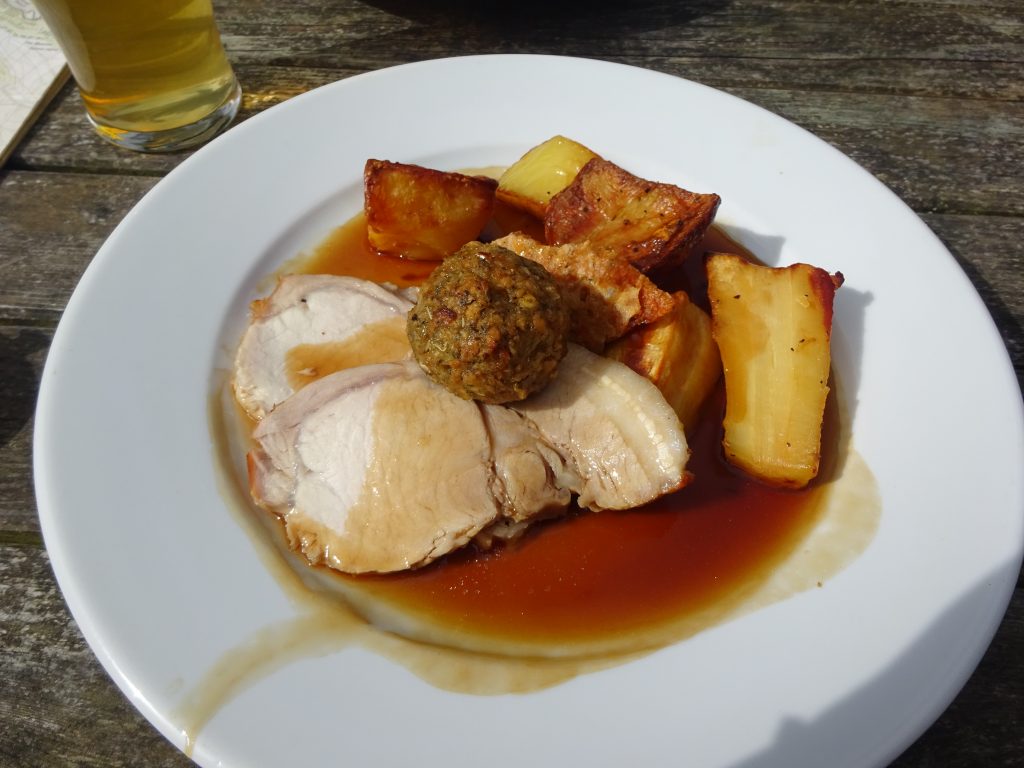 There is a small cove if you follow the river Heddon from the pub which me and Dave wanted to check out. But my parents decided to walk back along the road, as mum had achieved a lot and didn’t want to push it! (I think the dogs were grateful too). So after we’d finished our meals and drinks we separated.

Along the way to the cove, a couple stopped us. I was wearing a Beautiful Days top and they asked if we had been there this year. So we had a little chat. This became a regular occurrence! As it is a nearby festival, it is well known round this area!

The cove was a little rocky beach. But it was still pretty. We got right up to the sea and had a bit of time admiring the view then headed back towards the pub. Being us, we thought we’d be clever and try to cross the river using the stepping stones. It didn’t work… Luckily we didn’t fall in, we realised it wasn’t passable just in time!

We got back to the Hunters Inn and realised we had plenty of time before sunset, so decided to have another drink before heading off. We wanted to walk back along the coastal path rather than the road.

As we sat outside with our drinks we got chatting to another couple (courtesy of the Beautiful Days top). They told us that we should go to Sheppy’s before going home and Wellington monument. Both of which were about an hour away from the cottage. We decided that we’d visit these places on the drive back. Unfortunately it got to the time that we really needed to set off to get back along the coastal path before dark. So we said goodbye and headed off. If I thought the last bit (now the first bit) was steep before, it was even harder climbing up! But the walk was just as good the second time! And the views still amazing.

We got back to the cottage with a hope of watching the sunset. But it was overcast, so there really wasn’t a sunset… And no stars in the evening… Oh well. At least the dogs were worn out! View From The Coastal Path

And that is the end of the second part of the Mini Adventure. Follow the link to go to Part 3 – the third and final part.

Inspired to visit Combe Martin and around? Go to Tripadvisor to compare accommodation! 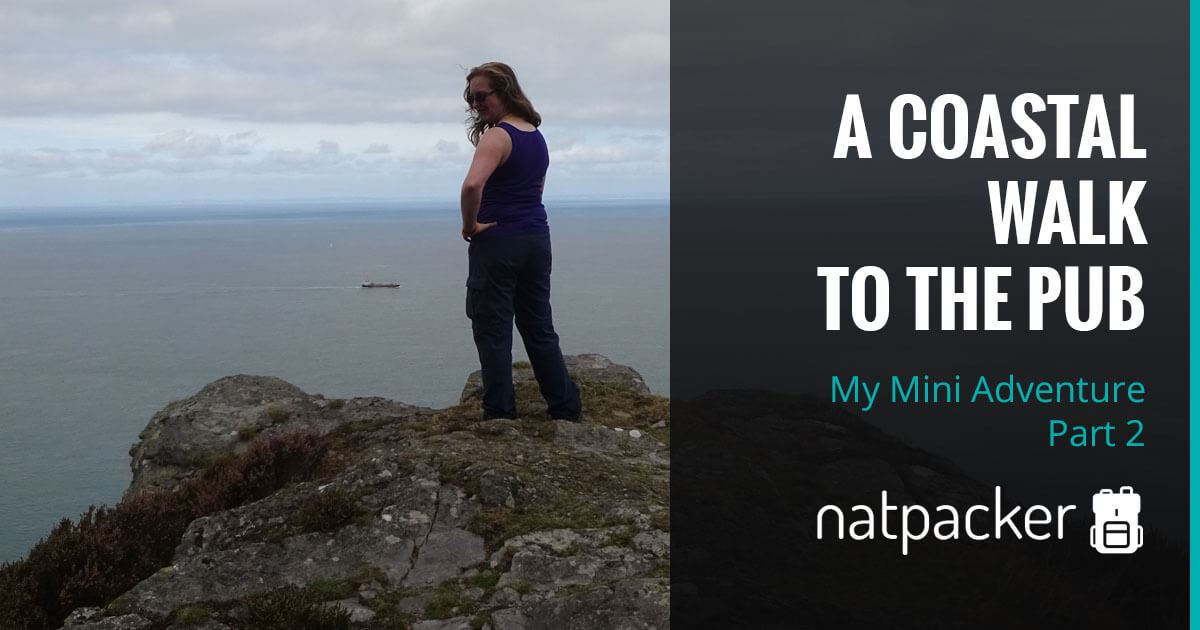