Beautiful Days is a music festival held in Escot Park, Devon. The festival is held on the third weekend of August every year. It was founded in 2003 by the band the Levellers, who still manage the festival. The name of the festival comes from one of their songs “Beautiful Day”.

The festival is organised by DMF music and although it has no sponsorship or external advertisement it regularly sells out quickly. Beautiful Days can accommodate 16,500 people, so is classed as a medium festival. It is very family friendly, with several kids areas and a variety of kids activities. There are 6 stages, 4 bars and plenty of food and drink vendors and stalls. 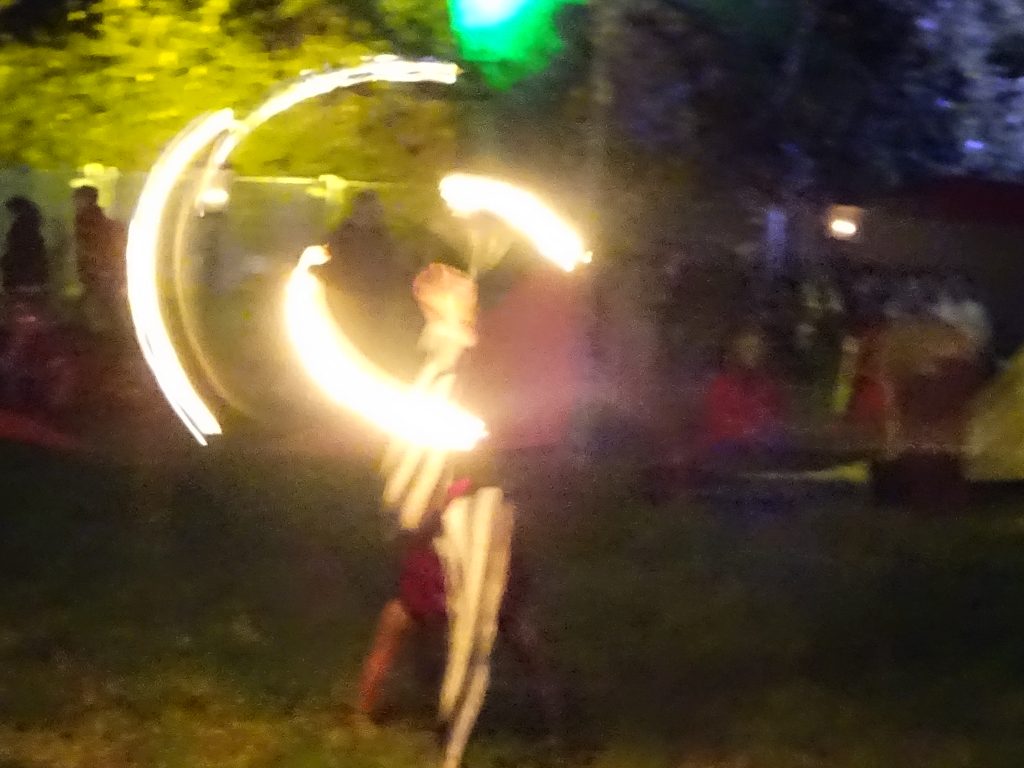 As it is their festival, the Levellers open and close it. They have an acoustic set on the Friday and headline on the Sunday, with a firework finale.

The Stages And Past Acts

The main music at Beautiful Days is folk and folk/rock, but there are also other genres. Although there are some regulars that play, they are generally not there every year (apart from the Levellers, but it is their party really…) The ‘regulars’ normally change stages, sometimes being on the main stage, sometimes in the Big Top. There are sometimes reggae bands and dance. One of the stages is a theatre tent, where there are kids shows and comedy. 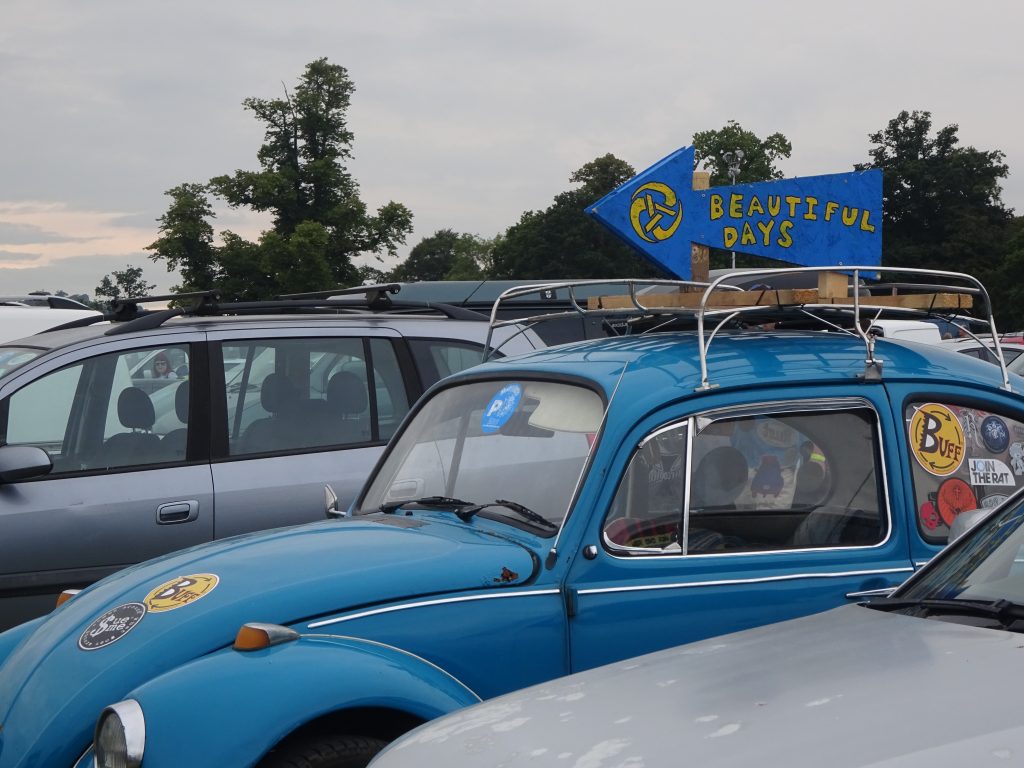 Somebody Knows The Way To Beautiful Days

The main stage has the main headliners and a variety of acts. This stage has been at the festival since the first year. The Levellers always headline on the Sunday night on the Main Stage, as a closing of the festival. Some past acts include:

Katzenjammer on the Main Stage 2015

The Big Top has always been at the Beautiful Days. It is the first music area to open on the Friday with a Levellers Acoustic set. Other past acts include: 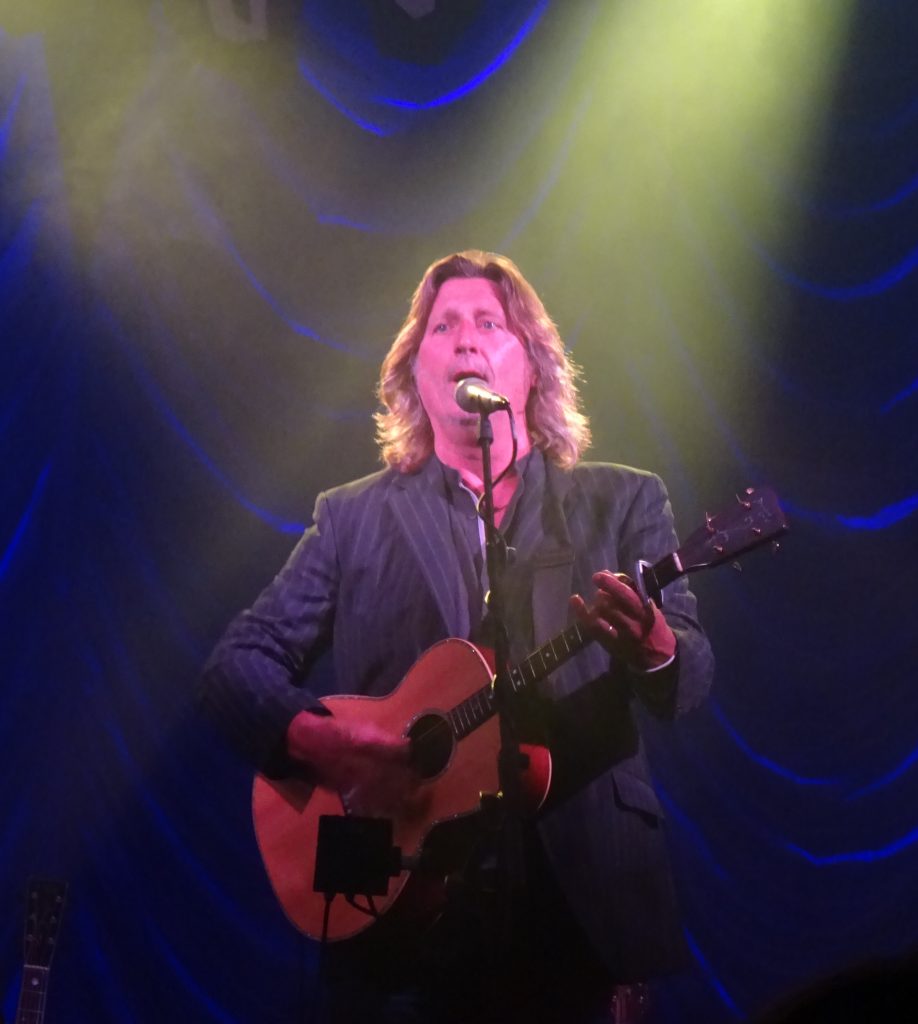 Added in 2005, the Little Big Top is more of a dance tent. It host silent discos and DJ’s as well as bands. Before the Theatre Tent this was also where the comedy was held. Some past acts include:

2007 saw the addition of the Bimble Inn, although it was not seen again until 2011! With it’s own bar, lots of seating and even a comfy carpet it’s a great place to just sit and chill. Bands and DJs have both performed here. Past acts have included:

The Bandstand was first added as ‘Dirty Davey’s Bandstand’ in 2010. In 2012 it was moved to Redwoods and became known as the ‘Bandstand’. It is also where the fancy dress competition, open-mic and ‘conversations with…’ now take place. Some of the past acts have been: 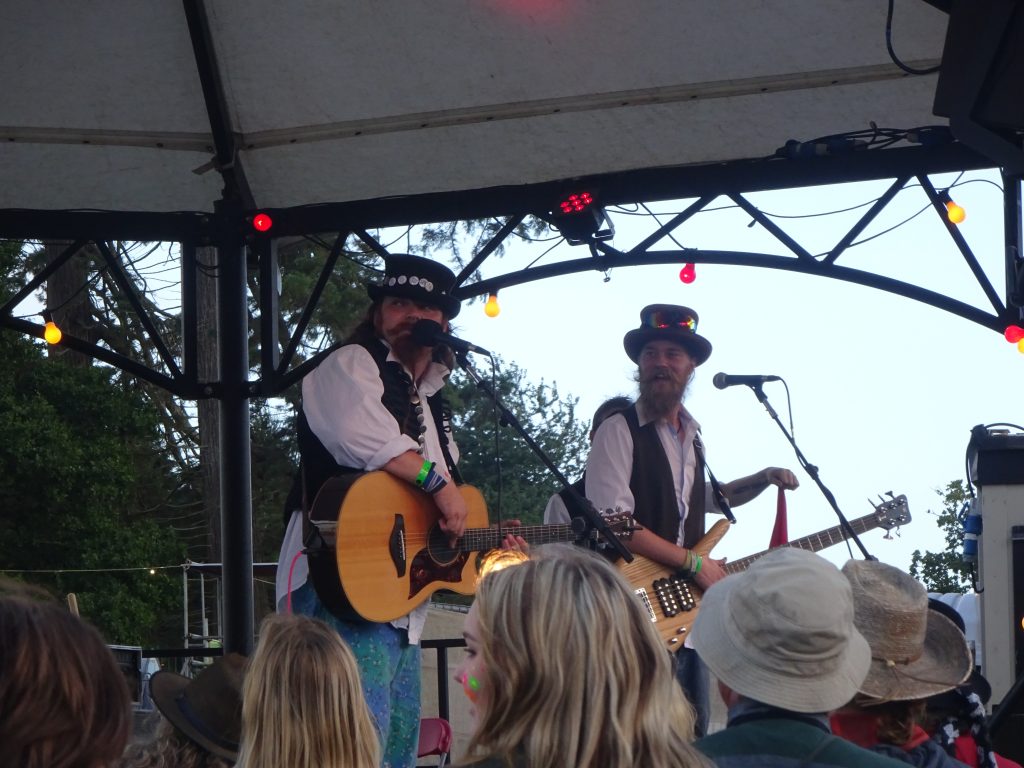 Sweet Chunks Band on the Bandstand 2016

The latest addition to Beautiful Days; the Theatre Tent was added in 2012. And don’t think it is just for kids! Although there are kids shows at earlier times, there is plenty to entertain adults too. Here you can see magicians, morris dancing, comedy and more. Past acts have included: 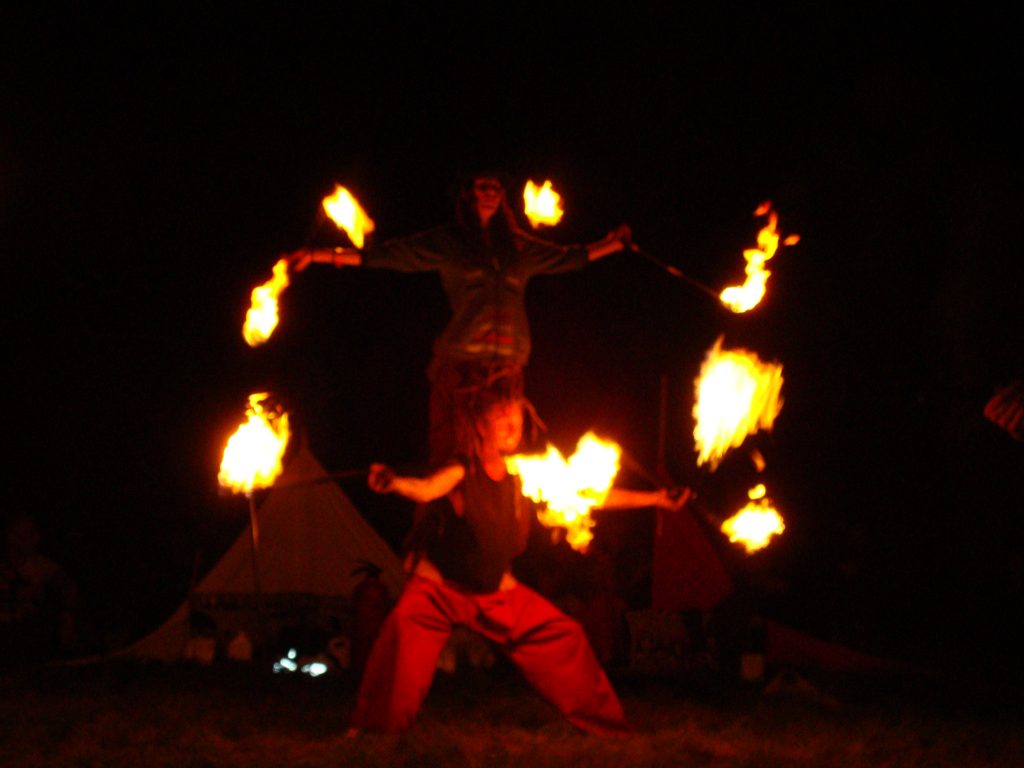 Which Campsite Is The Best

With five campsites to choose from, it can be difficult for the first timer (and even festival veterans) to choose where is best. There is no ‘best’ site, it depends on your needs and wants. All the campsites are close to the action and no further than a 15 minute walk to the main festival area. Here is a little bit of information to help you decide where to pitch your tent:

This camping area is above the Theatre Tent and near Redwoods bar and the Bandstand. Therefore, it is a noisy area and being close to the Theatre Tent means a lie-in is not very possible! It is also on a slope, making it a little difficult pitch! However, you get a great view of the festival grounds. So North Camping is great if:

Redwood camping is behind Redwoods and the Bandstand. This is the designated family/quiet campsite (although the closer to the bandstand the noisier it will be during the day and evening…) Part of this area is also on a slope (and a fairly steep one too), but there are also flat areas. You are also close to the Theatre Tent so kids can be entertained in the morning! Redwood Camping is ideal for: 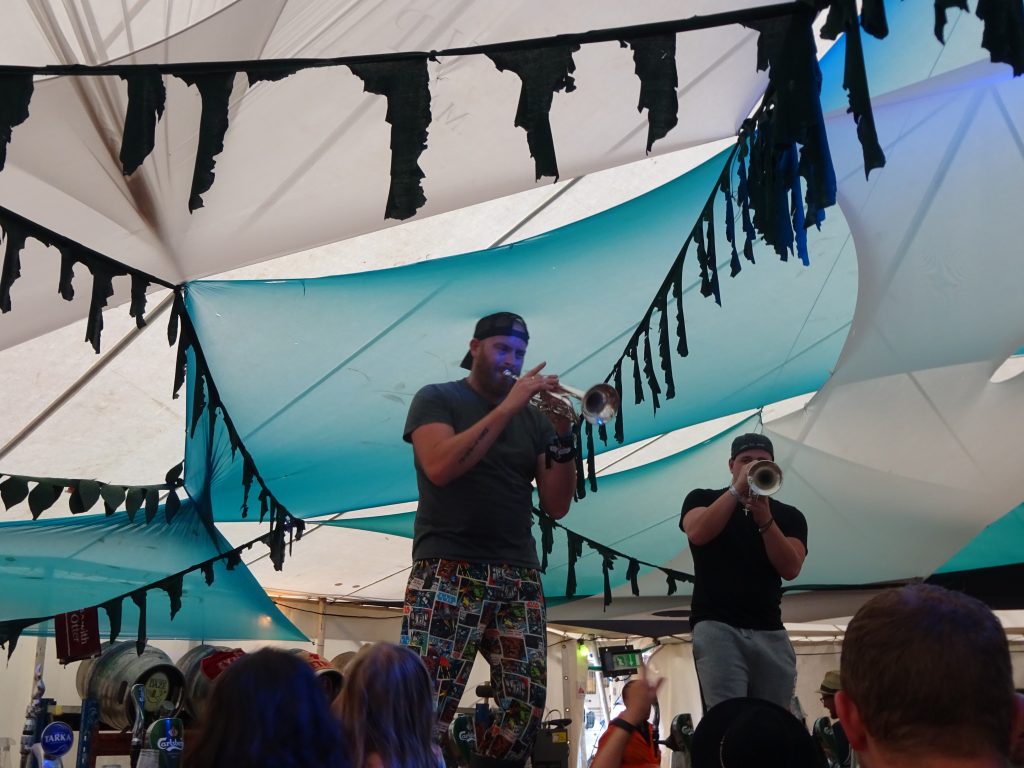 No Limits Street Band  in Redwoods 2015

This campsite is the furthest away from the festival grounds, past Redwoods and Barley Fields. It is the closest site to the car park. This site has a fairly steep slope on part of it, so it can be difficult to find a good spot to pitch the tent. But there are areas without a slope, you just have to get the good spots first! However, with it being the furthest from the arenas, this area is generally quiet. This area is good for:

The Barley Fields Camping is between North Camping and South Camping, above Redwoods. This campsite has a small slope, but isn’t as steep as other areas. It is close to the Band Stand and Theatre Tent, so can be a little noisy, but not as much as the North Camping. This site also has showers. I tend to notice more seasoned campers in this area. This site is perfect for:

Levellers Acoustic in the Big Top 2015

As the name suggests, this campsite this campsite is within the festival grounds and seperate from the other campsites. Located near the Main Stage, the Little Big Top and the Bimble Inn, this is the noisiest campsite and tends to be full of party-goers and those that got dropped off. There is a Body and Soul Area and a Tea Tent. The Tea Tent stays open late and so is a good place to head to if you need some peace after the headliners. There are also showers in this campsite. This site is good for: 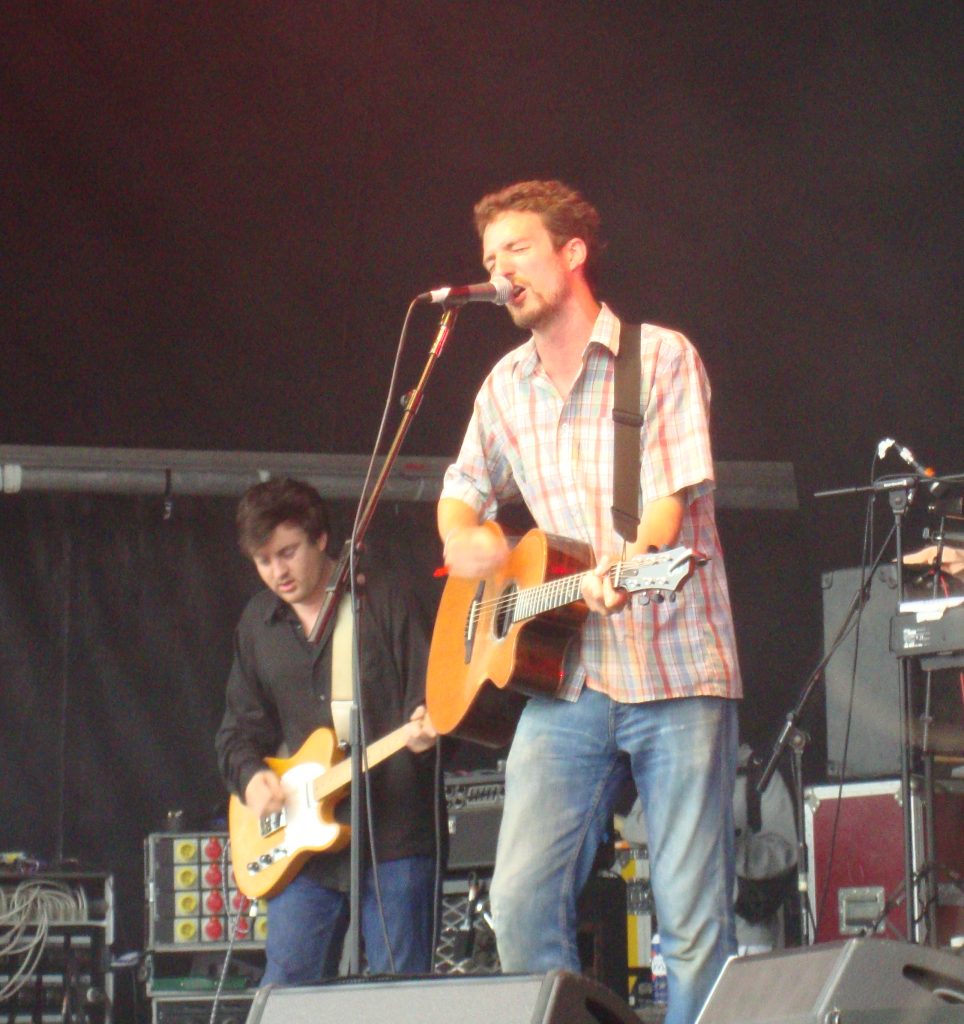 Frank Turner on the Main Stage 2009

There’s not just the stages at Beautiful Days. There are bars, shops, food stalls and kids areas. Plus the facilities are pretty good too.

Peatbog Faeries in the Big Top 2015

Every year Sunday has a fancy dress theme. So expect to see all sorts and plenty of people ‘thinking outside the box’. There is also a competition for best fancy dress. Past themes have included:

There are five bars at Beautiful Days. The ale is from the local Otter Brewery and there are also local ciders, one of which is called ‘Suicider’. You can also purchase wines and spirits. The drinks aren’t stupidly expensive either. The bars are: 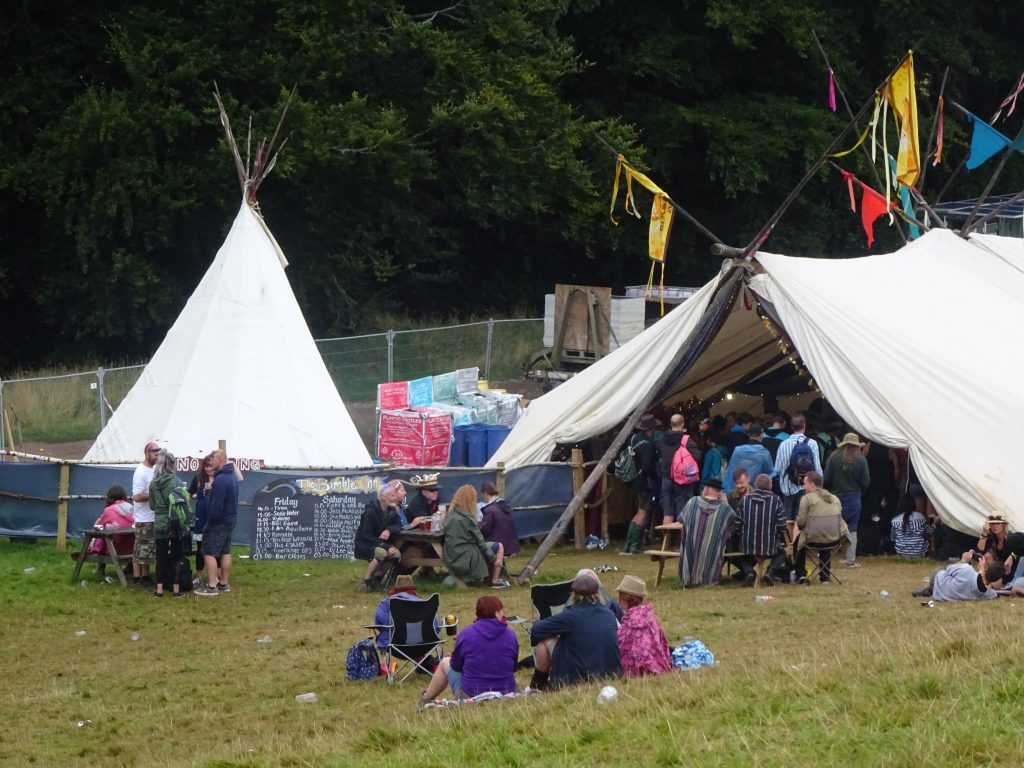 There is a wide variety of food available, with plenty of vegetarian and vegan options too. Some food you can expect are: 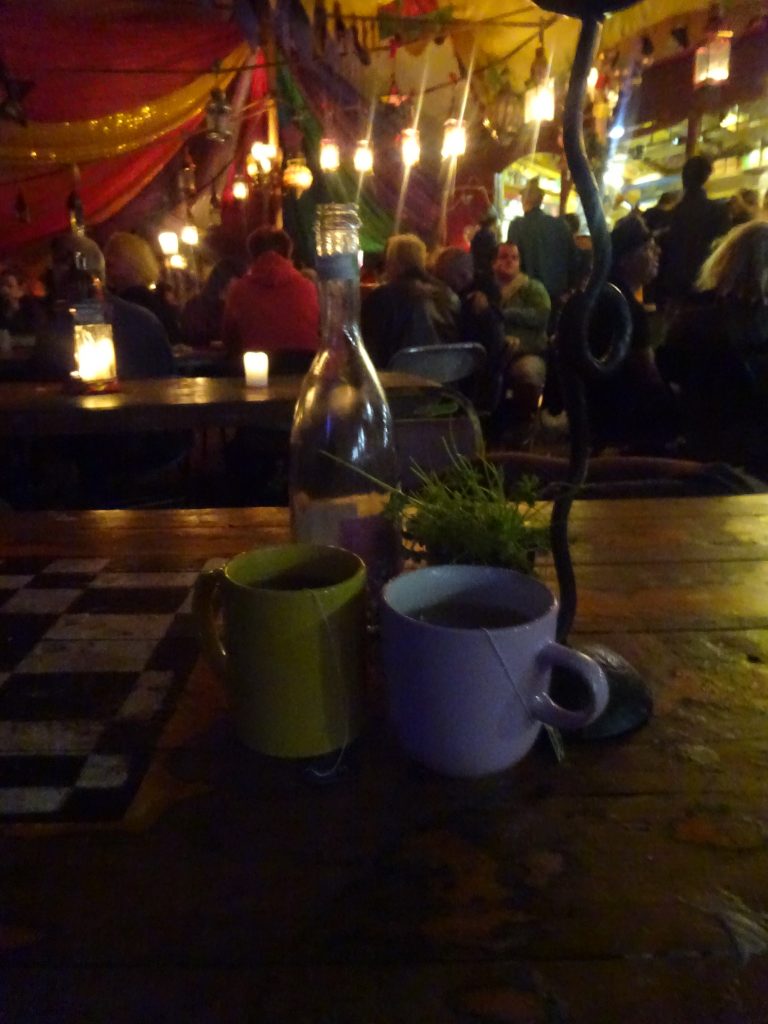 There’s loads for kids at Beautiful Days, it really is a family friendly festival. There are different areas for different age groups too. Some of the things the children can enjoy are: 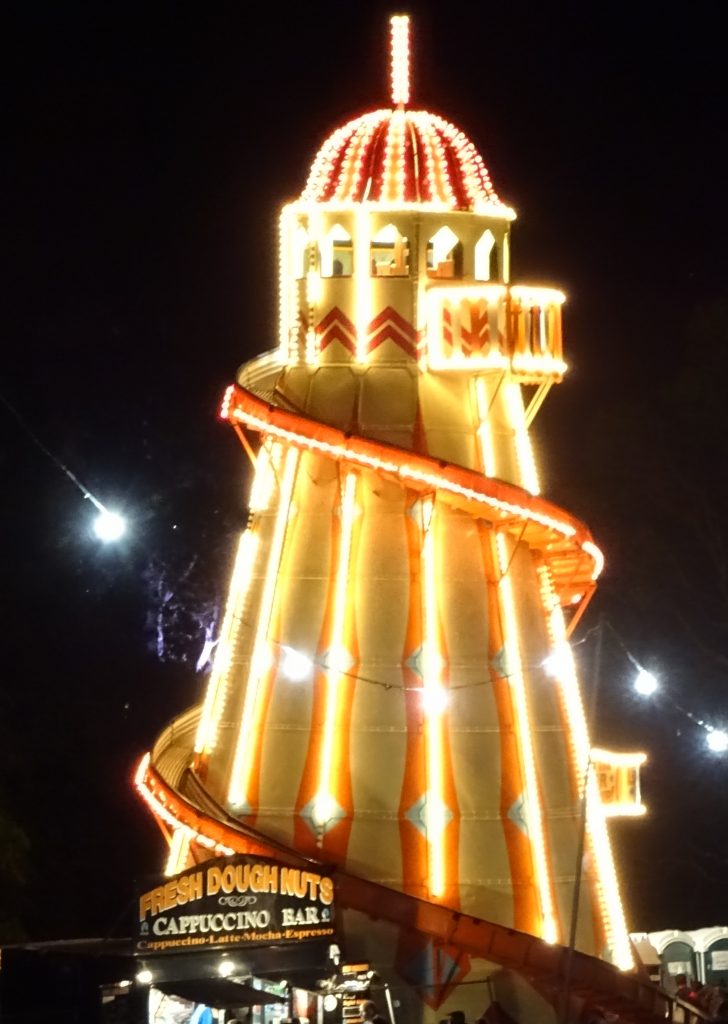 There are loads of shopping opportunities and a wide range of items. Whether you’re shopping for something you forgot or something’s caught your eye you can expect to find:

There are plenty of facilities at Beautiful Days. You can expect:

Toilets – aren’t too bad for a festival, in fact are generally pretty clean with plenty of hand gel and paper. There are plenty of toilets scattered in groups around the site.
Showers – Located in the Barley Fields and Arena Campsites.
Water Points – Drinkable water is available at several points in a few campsites.
Rubbish – Lots of areas with large bins throughout the festival and the campsites to dispose of rubbish. With different bins for different types of rubbish you can do your bit for the environment, and most people do. I am always amazed at how little rubbish there is at Beautiful Days.
Village Shop – Here you can get food to cook at your tent, washing up liquid, newspapers etc. And they don’t take the Mick with the price either, which is great.
Merchandise Tent – Programmes, band and festival t-shirts, cds and more. Get there early, a lot of the merchandise goes pretty quick!
Info Point – If you need any help finding your way around, the information point has staff that are ready to help!
Cash Points
Although most of the shops etc. do take cards, if you do need cash there are cashpoints available. 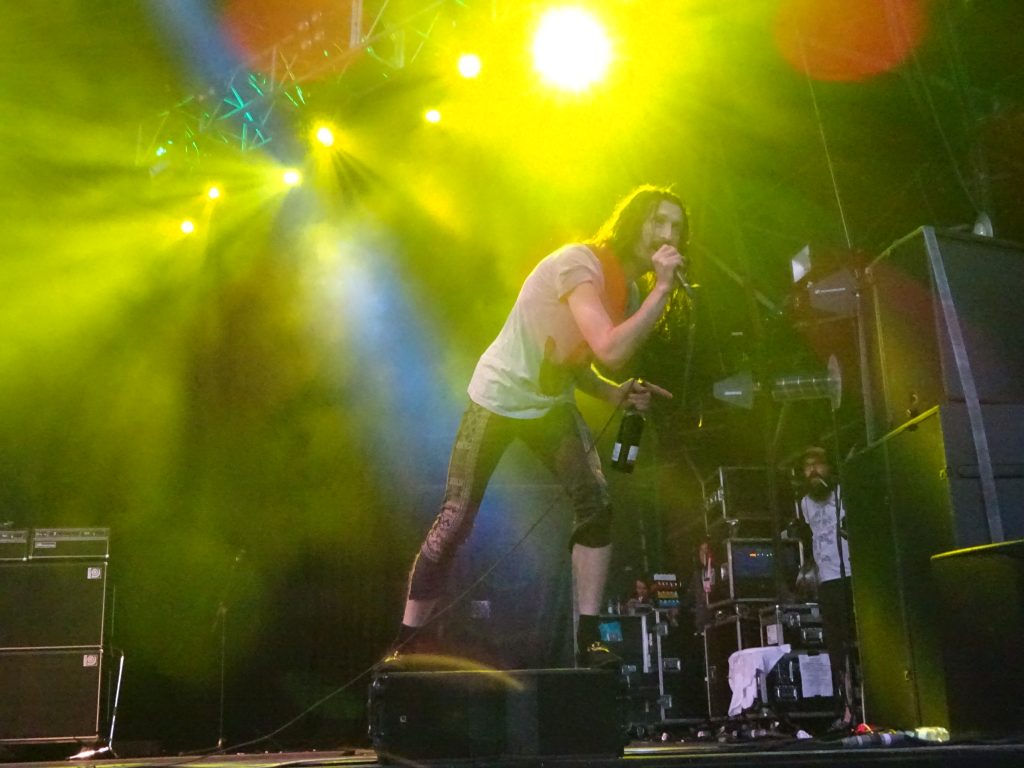 Gogol Bordello on the Main Stage 2015

Beautiful Days Festival has won several awards and is often shortlisted for a variety of awards. It has won: 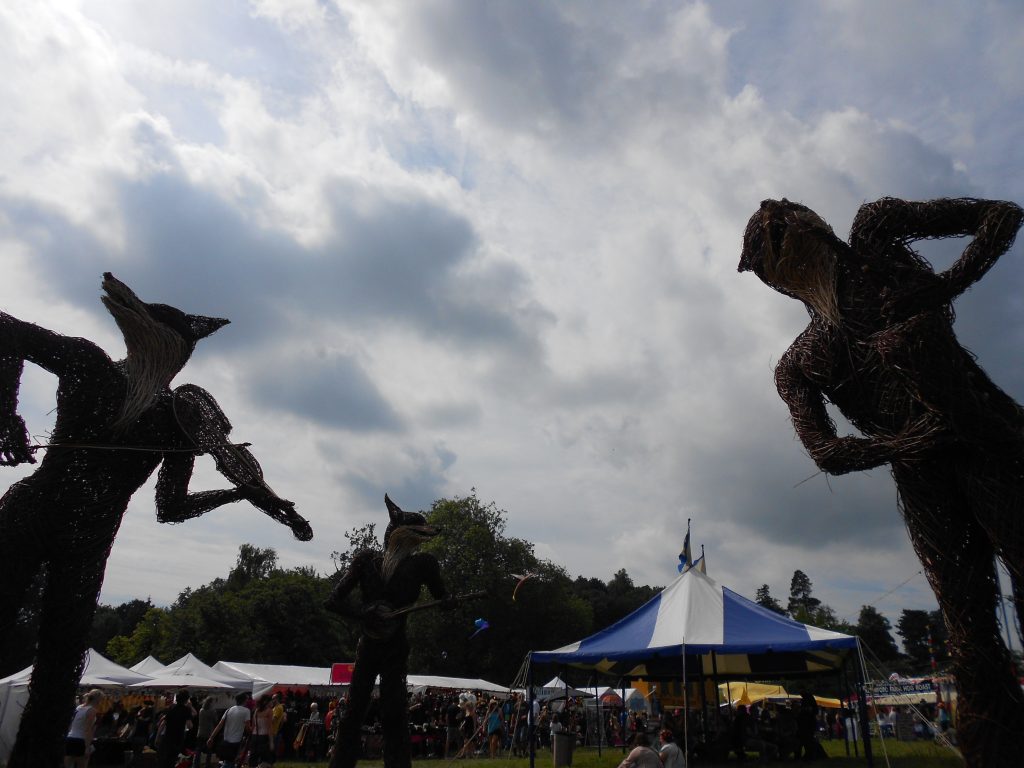 Want to go? Tickets tend to go on sale early in the year (and sell out pretty quick). There are no day tickets available, it is full weekend only. If you drive you will also need to purchase a parking pass. You can arrive on the Thursday night at no extra cost, which is great if you’ve got a long journey. Many of the bars and shops open on the Thursday night too. 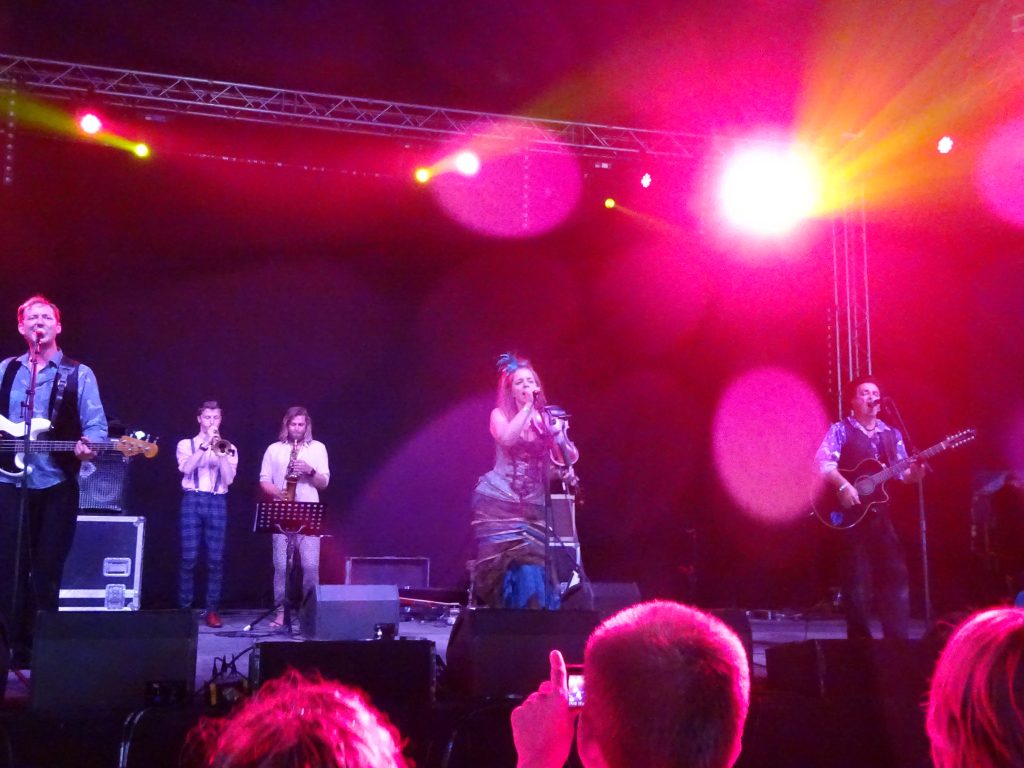 Beautiful Days Festival is a great medium sized festival. The people are friendly and just there to have a good time. If you want to try a festival but are unsure what to choose, the Beautiful Days is a good choice.

It is also a good choice for families, as there’s plenty for kids, but don’t think that means it isn’t fun! It’s great for big kids too. In my opinion, one of the best things about this festival is that fact that if you want to be at the front for a headliner, you don’t have to stand at the front all day, you just get there as the band before finishes! Prices aren’t ridiculous for food and drink and you can always take your own if you want to save more. Beautiful Days is a fun weekend, no matter what the weather’s like!

Want a bit more of an idea what the music is like? I made a playlist! Simply put this link in your Spotify Search: spotify:user:natpackertravel:playlist:0dCBLfFh81a4uvxbyPbhel

It includes acts that I like from the festival and acts that have not been there before (that I know of) but I think would fit.

Even if you’re not into Festivals, it is a beautiful part of the world and worth a visit. Compare accommodation on Tripadvisor! 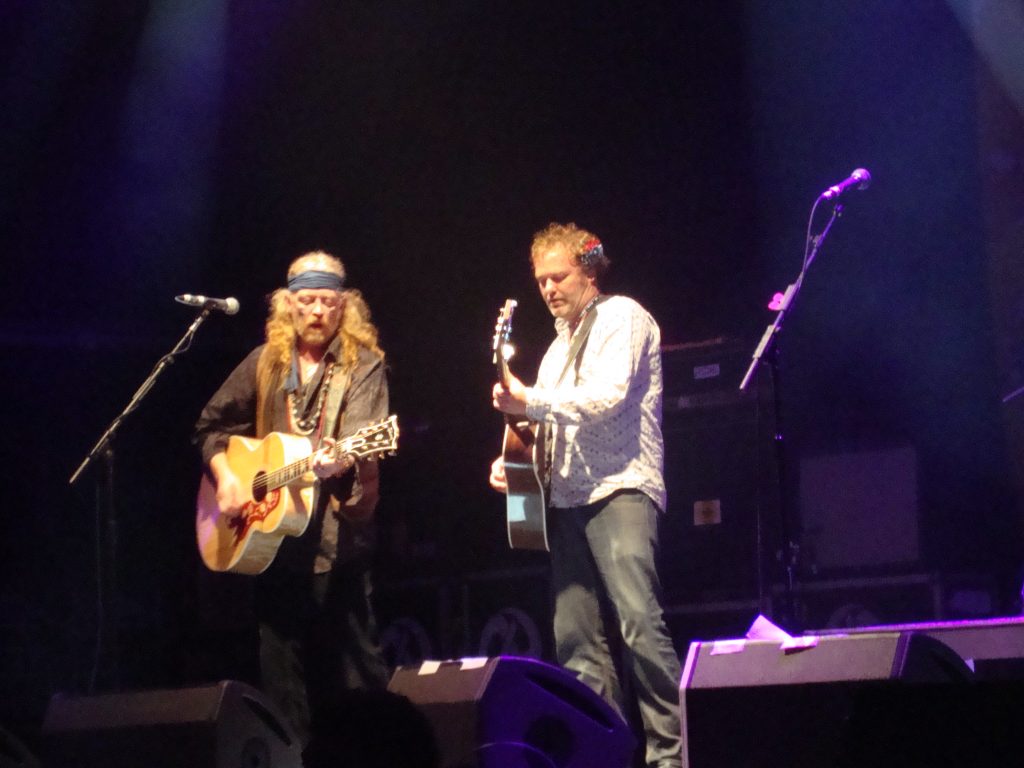 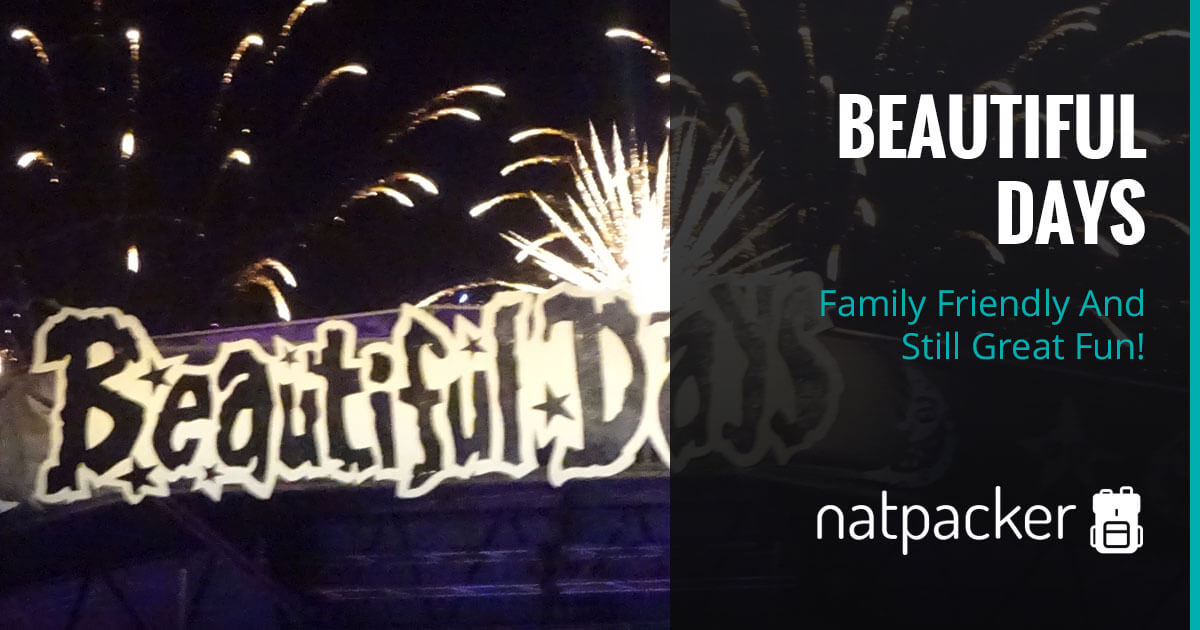