You may not think Scotland and beaches go hand in hand, but there are some incredibly beautiful beaches in Scotland. And one of the most beautiful is Sandwood Bay. Found in Northwest Sutherland, near the town of Kinochbervie, this Scottish beach can make a great stop if you’re on the North Coast 500. It may not be the easiest beach to get to, but it is quiet and the views are well worth the effort.

Sandwood Bay, or Bàgh Seannabhad in Scottish Gaelic, is part of the Sandwood Estate, managed by the John Muire Trust. It is not only the bay and beach that is in the estate, there are also eight islands and the freshwater Sandwood Loch. The name “Sandwood” is believed to have come from the Viking “Sandvatn”, which means “sand water”. It is also believed that Viking longboats were dragged up the sand to the loch. 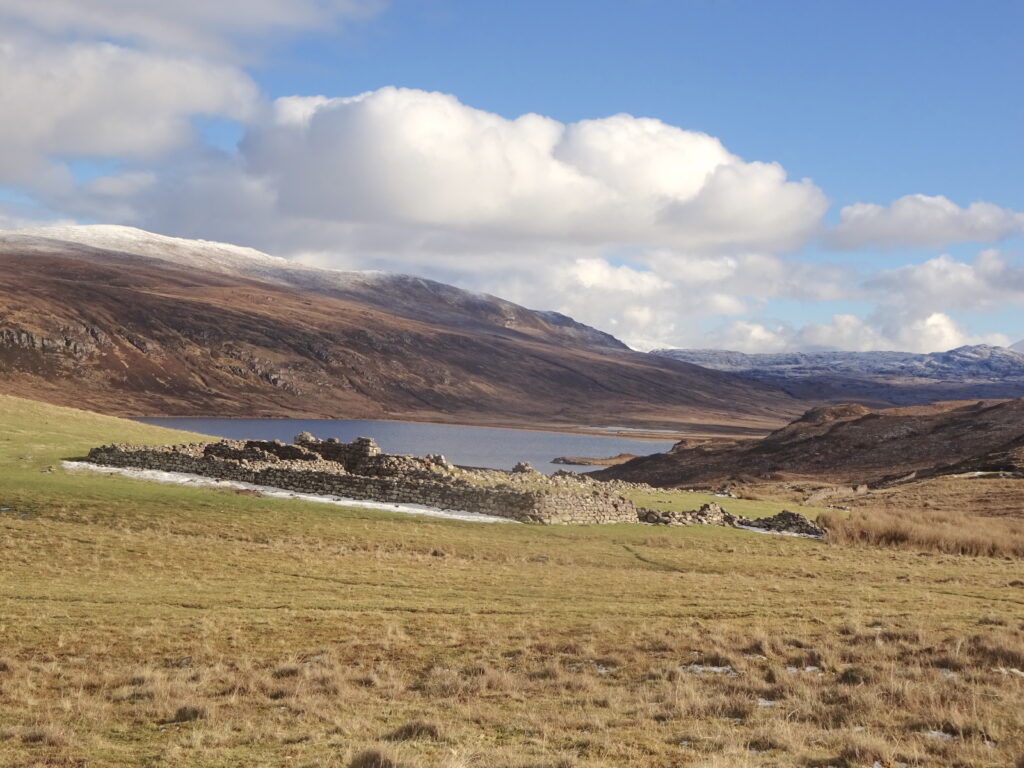 The Sandwood Estate Is Worth A Visit, And Not Just For The Beach

The estate is a Special Site of Scientific Interest (SSSI) and a Special Area of Conservation (SAC). It is a special site due to its dune grassland, shifting dunes and machair. These designations give the estate high levels of protection.

Sandwood Bay beach is about 1.5 miles long, with pink sands flanked by towering cliffs. Behind the beach are dunes and peat moors, which have to be crossed to reach this beautiful beach. The beach itself faces into the North Atlantic, so be prepared for wind when you visit. It is a remote and rugged beach, and that’s probably why it is unspoilt. 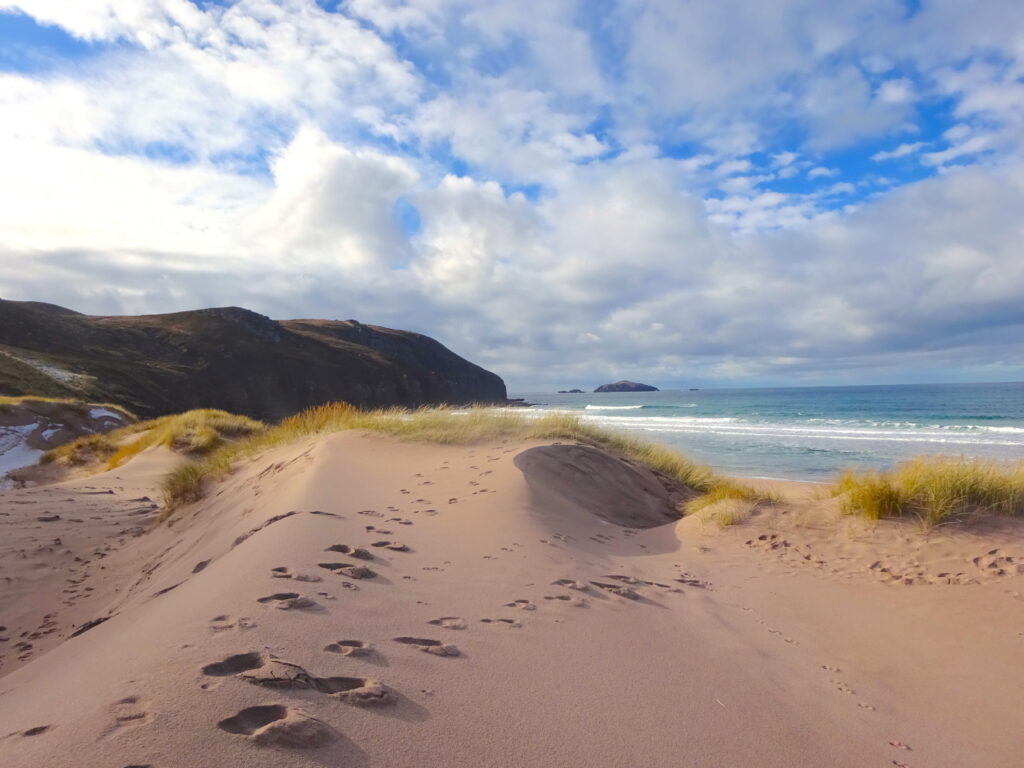 Sandwood Bay Is Surrounded By Cliffs And Dunes

To the south of the beach is Am Buachaille, which is Gaelic for “the shepherd”. This is a sea stack of Torridon sandstone that reaches 65m (213 feet) high. The stack can be climbed and is considered the most serious of Scotland’s big three stacks (so only attempt to climb if you know what you are doing). Unfortunately, I could not see this sea stack due to it being high tide when I was there, guess I need to go again. 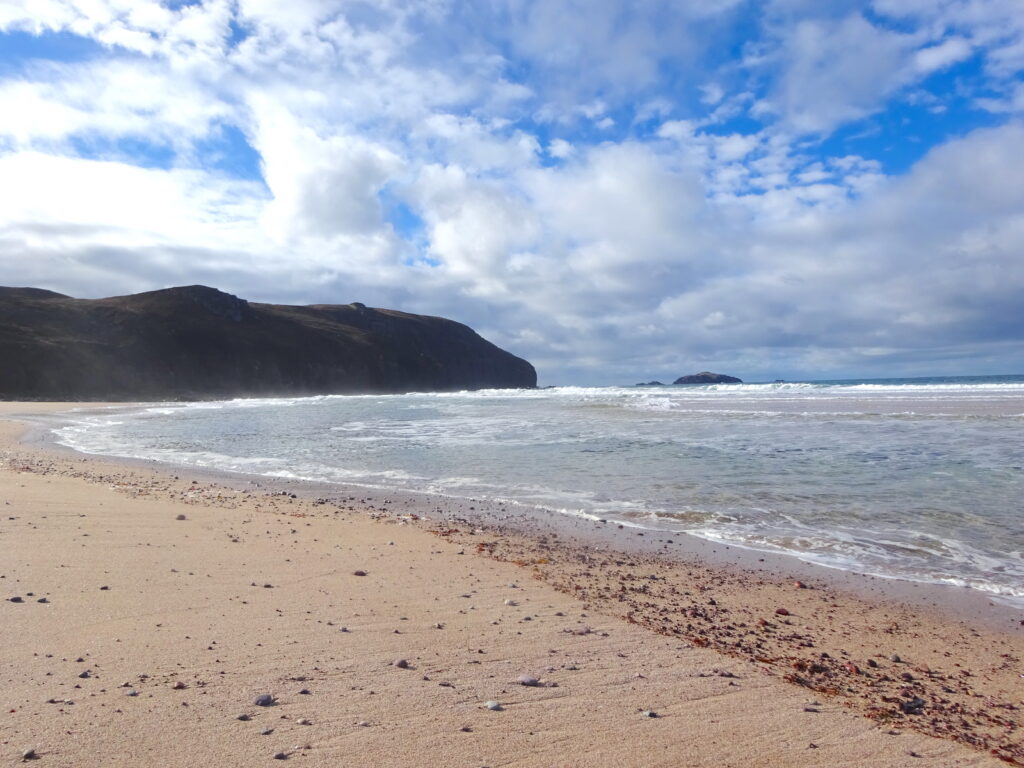 Who owns Sandwood Bay?
Sandwood Bay is owned and managed by the John Muir Trust, as part of the Sandwood Estate. 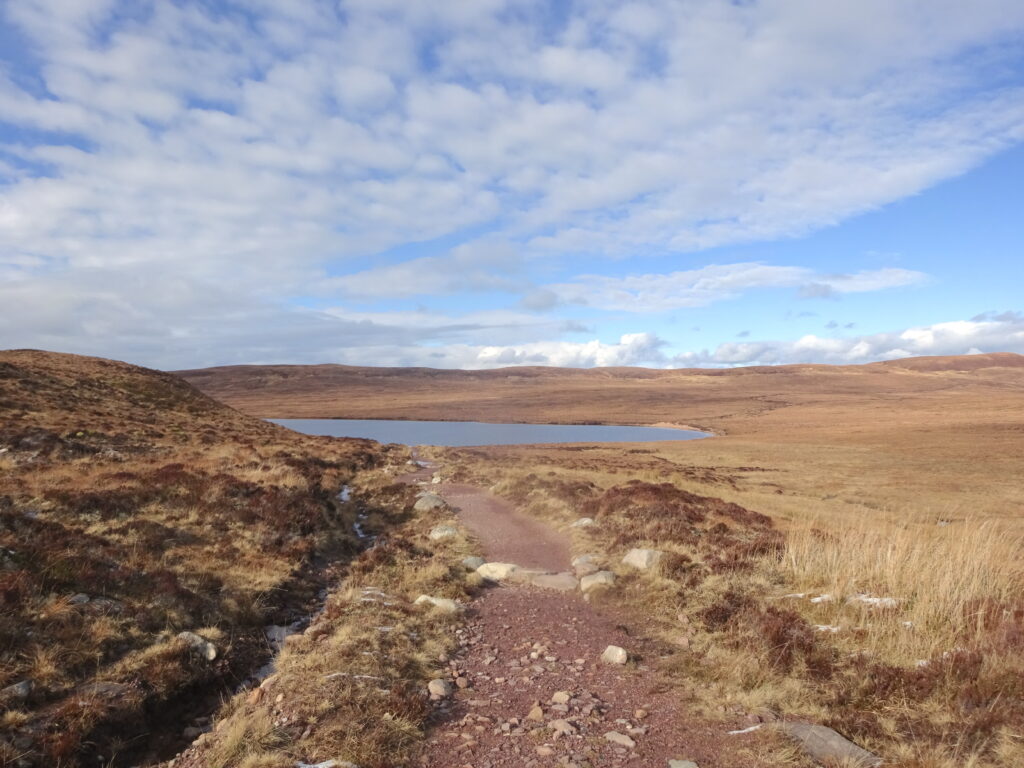 The Bay Is Only Accessed By Walking

How long is the walk to Sandwood Bay?
The walk from the Blairmore car park to Sandwood Bay Beach is about 4 miles. You’ll want to leave at least an hour and a half for this walk. 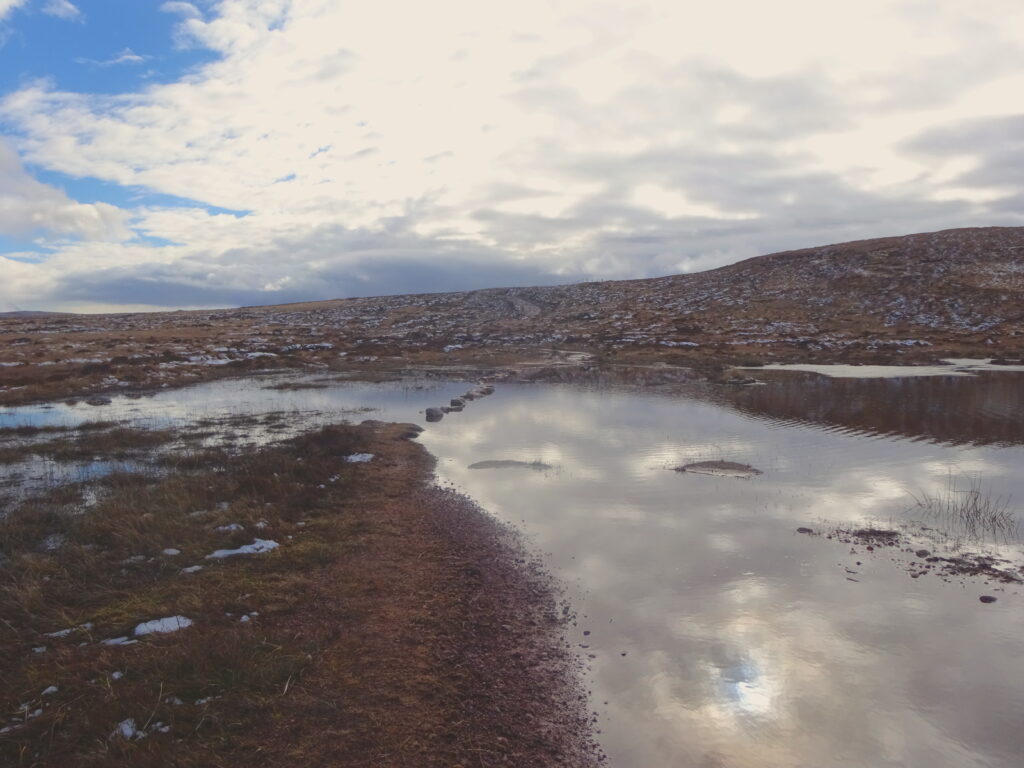 The Walk To Sandwood Bay Is Mostly Easy, But You May Find Parts With Stepping Stones To Cross

If you’re planning on checking out Durness too, be sure to visit Smoo Cave

Ghosts and Legends of Sandwood Estate

A number of ghost stories and legends surround Sandwood Bay. With its dramatic setting and rugged location, it’s no wonder it’s said to be haunted.

Firstly, there is said to be the ghost of a bearded mariner who haunts the beach. It is believed that the sailor died in one of the many shipwrecks that happened in this area, many of the remains are buried under the sand. In the 1940s two crofters said that this ghost tramped across the sand towards them wearing a buttoned tunic. He apparently yelled at the crofters that the beach was his. The Current Is Very Dangerous, And A Ghost Of A Drowned Mariner Is Said To Haunt The Beach

Mermaids are also said to inhabit the bay, in fact, the most recent sighting in Britain of a mermaid was at this beach. In 1900, a local farmer Alexander Gunn was walking his dog when he spotted a figure on a ledge. At first, he thought this was a seal, but soon noticed that the figure had red hair, green-blue eyes and a 7-foot long yellow body, and so believed that this was a mermaid that he saw.

There are plenty of other stories about the bay and estate, these are the two most common legends surrounding the beach. So if you do decide to wild camp here, you may get more than you bargained for! 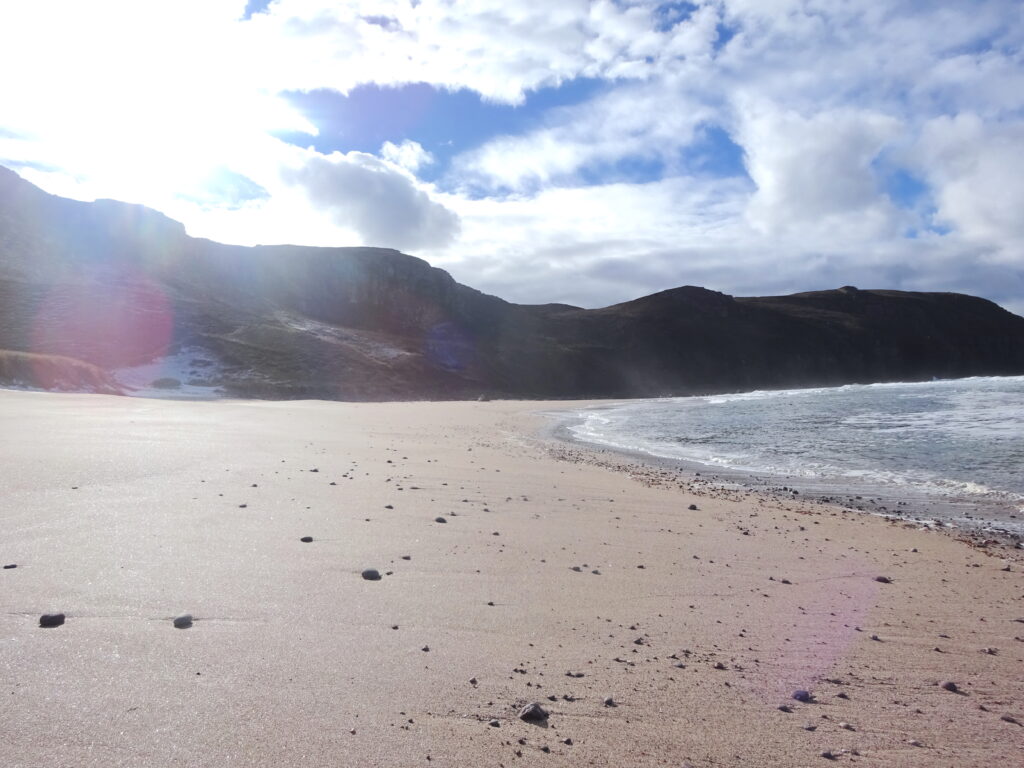 Sandwood Bay is located in Sutherland, in the northwest of Scotland. It is a beautiful spot and definitely worth a visit. Due to its remote location and lack of road access, it tends to remain a quiet spot. The beach is 45 miles from Ullapool and the nearest car park is a little over 20 miles from Durness. You can visit for just a few hours on a North Coast 500 trip, wild camp here, or even walk to Cape Wrath from this spot.

Have a read of my visit to Sandwood Bay during my honeymoon.

Even though the beach is only a mile long, you can easily spend some time here admiring the view. Though be aware, the beach faces straight into the teeth of the North Atlantic, so it can be a bit fresh. Therefore, be prepared for colder weather and gales on the beach and surrounding dunes. 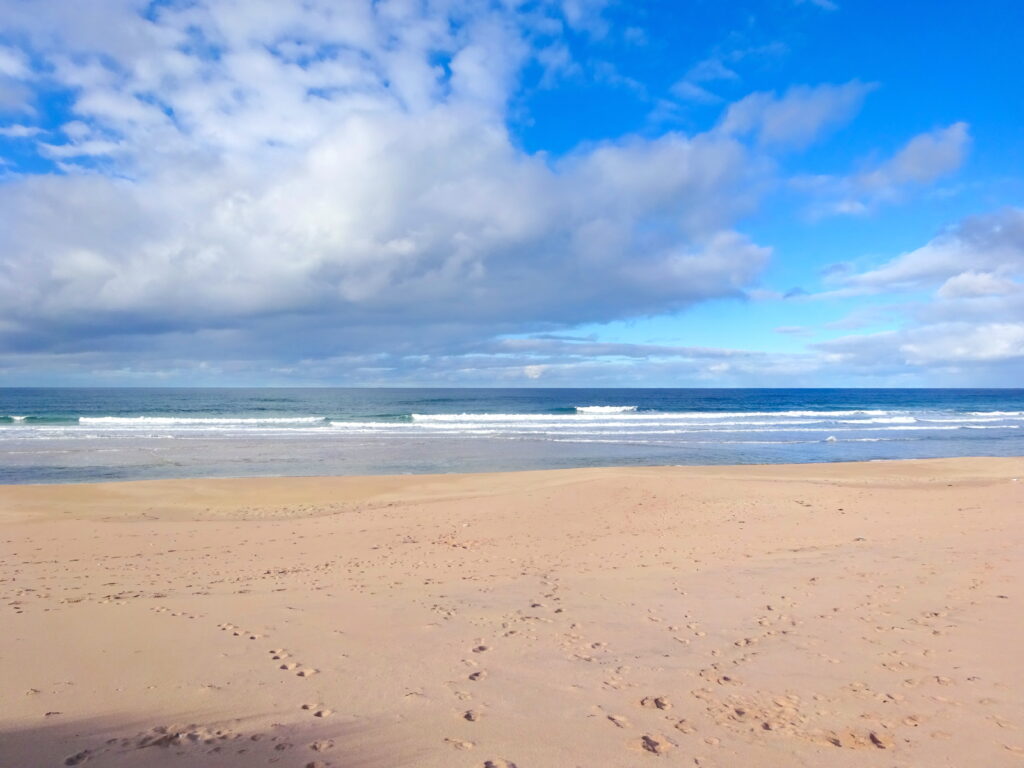 Sandwood Bay Is A Beautiful Spot

How To Get To Sandwood Bay Beach

To get to the beach, the nearest car park is at Blairmore, which is northwest of the hamlet of Kinlochbervie. The car park is on the single-track B801. However, be aware that there is no public transport to this car park. Therefore, you need to be driving yourself or get a taxi to access the start of this walk. The nearest place you can get public transport to is Kinlochbervie, but only in the summer months.

Planning to explore the highlands? Rent a car with Discover Cars

From this gravel car park, it is a four-mile walk to the beach of Sandwood Bay. This walk takes you along bleak moorland, with a few streams that need to be crossed (and can be done fairly easily as there are stepping stones). Along the route, there are cottage ruins and views over various lochs. Once you get past the moorland you start climbing over sand dunes and are finally rewarded with views over the beach and out across the ocean. 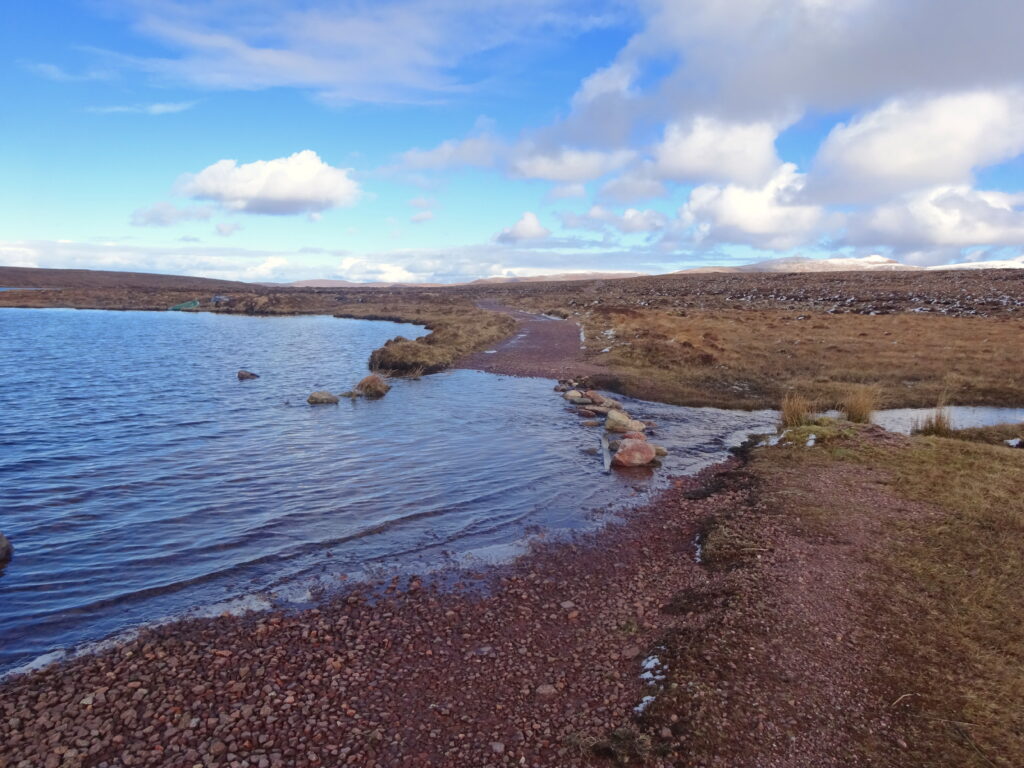 The Path Does Include Stepping Stones

The route to the beach is mainly flat and not too difficult. However, once you reach the dunes this can be a bit more troublesome to walk over. Also, be aware it can be a little difficult finding the path back. You’ll need to walk back over the dunes to find the path, and all dunes look the same!

If you plan on visiting Sandwood Bay, check out nearby accommodation on HostelWorld The First View Of The Beach From The Sand Dunes