Alderley Edge in Cheshire probably isn’t high on your list if you’re planning a trip to England. In fact, I’d be surprised if you’ve even heard of this northern village. Not far from Manchester, overlooking the Cheshire Plain, most tourists will go right past it (if they even come this far north). But if you have the chance to take a detour to this village you can find out about a local legend and find the Wizard of the Edge and the Wizard’s Well of Alderley Edge.

The Legend Of The Alderley Edge Wizard 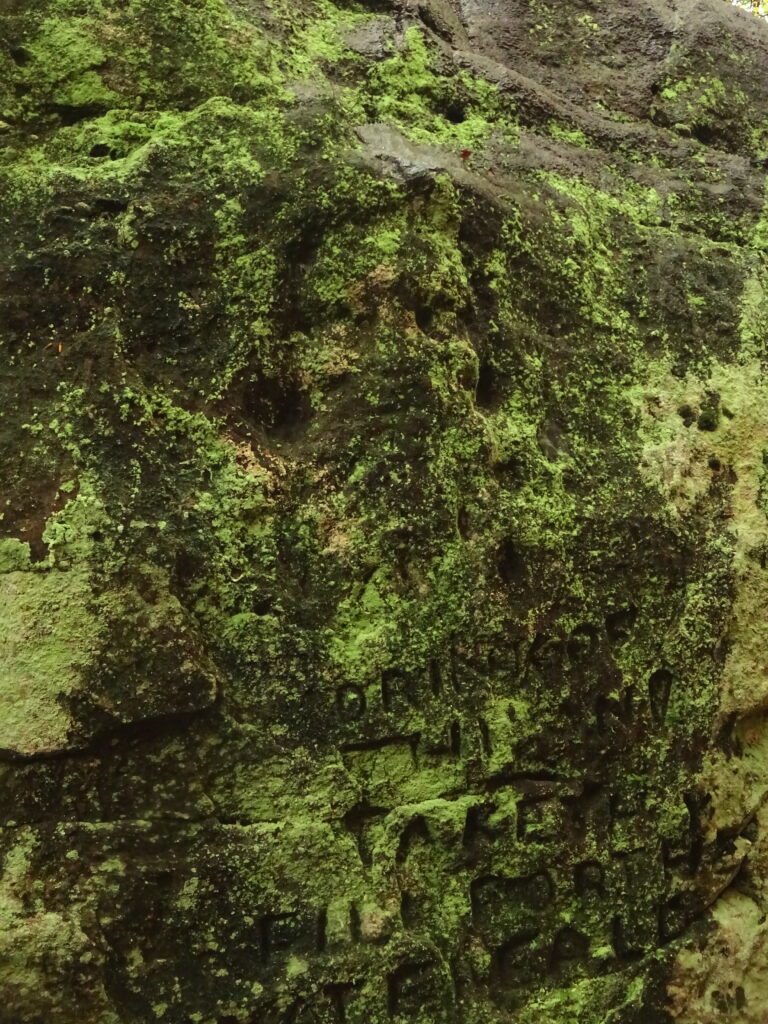 The Wizard Of Alderley Edge Is Local Legend

A Farmer And A White Horse

One day a farmer from Mobberley decided to sell his milk-white mare, so he set off with the horse to Macclesfield Fair, where he would sell her. On the way, they had to pass by Alderley Edge and as they reached the Edge, the mare refused to move. This was near a spot locally known as the Thieve’s Hole. No matter what the farmer tried, the mare would not budge.

Suddenly, an old man appeared, strangely dressed and holding a staff. This peculiar old man offered the farmer a large sum of money for the horse. But the farmer refused, thinking that he would get a better price at the market.

“Go then, to Macclesfield,” replied the Wizard, “but you will not find a buyer for your horse there. If you find these words to be true, meet me this evening and I shall take your horse.”

The farmer laughed at these prophetic words of the bizarre old man, thinking there was no way they would come true. As the old man disappeared into the woods, the mare allowed herself to be led on to Macclesfield. 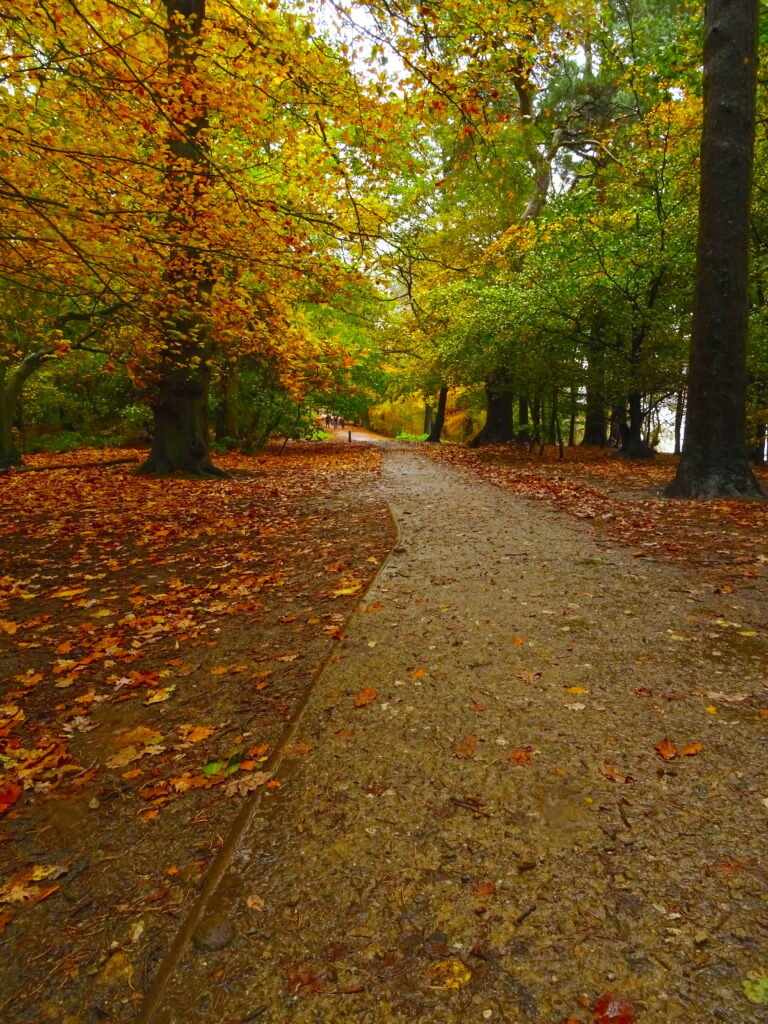 The Alderley Edge Woods Have A Magical Feel

At Macclesfield Market, though many praised the beautiful mare, none offered to buy here, much to the farmer’s disappointment. So after the market was over, he set off for home with his white mare.

As the farmer approached Alderley Edge, he could see the same strange old man waiting for him. The man offered the sum of money again for the horse and this time, the farmer agreed to sell. So the old man asked the farmer to follow him with his horse.

The old man led the farmer through the forest, past stormy point and its views and further still. As the farmer began to worry if he had made the right choice and if the peculiar man had ulterior motives, he soundly heard other horses neighing. It sounded like it was coming from underground. 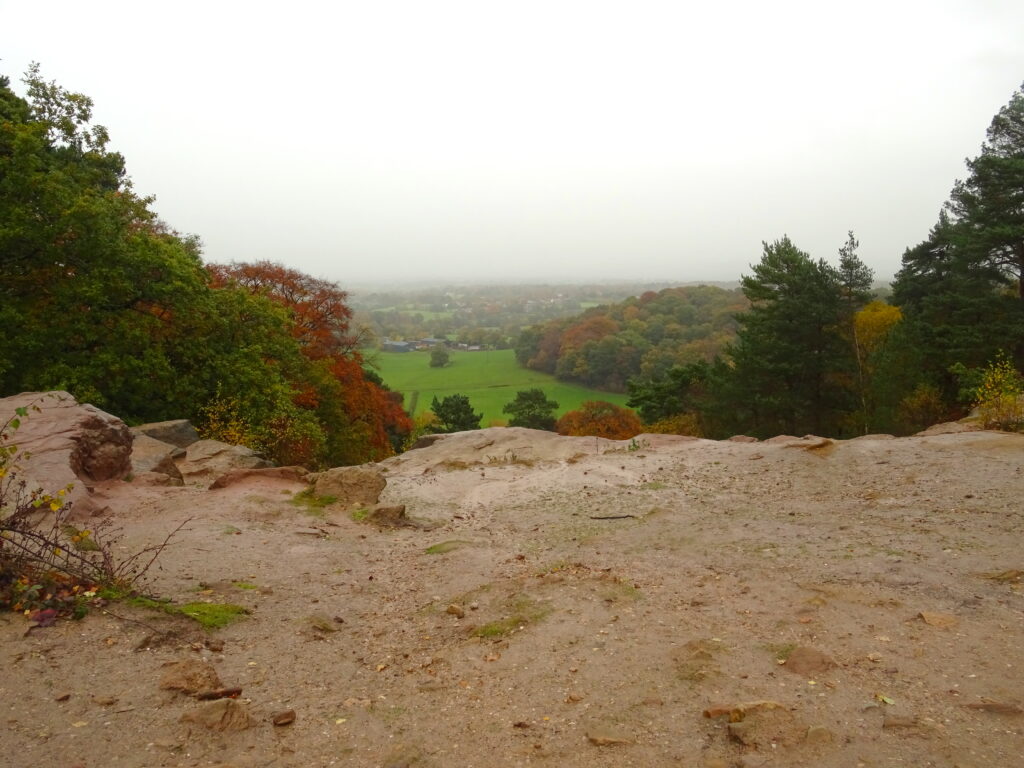 The Wizard Took The Farmer Past Stormy Point, Another Place To See In This Area

The old man stopped. They were in front of a large rock. The old man took out a wand and touched the rock. At the touch of the wand, the rock slid open, revealing a pair of iron gates which flew open with a thunderous crash.

Through The Iron Gates

The horse shied and whinnied, and the farmer fought down his own fear as he tried to control the beautiful horse.

“Do not fear.” The Wizard told the farmer, “Come and look upon a sight that no mortal has looked upon.”

Not knowing what else to do, the farmer followed the old man into the cave. Down, down, down they went. Until they reached a huge cavern. Once his eyes adjusted, the farmer saw that there were over a hundred knights in shining silver armour, all asleep.

Next to each knight was a milk-white horse. Except one, who was horseless.

“With your horse, these men are now complete,” spoke the wizard, as he set the farmer’s horse next to the knight and set her to sleep.

When the farmer asked what the purpose of the knights and horses were, the wizard replied “There will come a day when I will wake these men and horses. They will then descend onto the plain during the last battle of the world. It is these that will decide the fate of that battle.”

Taking the farmer into another cavern, the farmer was shown a horde of treasure. Gold, silver and all manners of precious jewels all piled in a heap. Pointing to the treasure, the wizard told the farmer to take all that he could carry in payment for his mare. He then led the farmer out of the caves.

As the farmer stepped out into the cool night air, he turned around. But wizard and iron gates had vanished.

Alderley Edge is a small village in Cheshire, but it is also the name of the area around this village. The area is a Site of Scientific Interest (SSSI), due to its geology, which gives insight into Triassic Sandstone.

The site is also the oldest prehistoric mining site in Britain, out of a handful of such sites found. Mining activity began here as early as 1900BC. In the caves, copper and other ores can be found.

The area of Alderley Edge that can easily be explored is part of the National Trust. This part includes dramatic red sandstone escarpments, that gives incredible views over the Cheshire countryside. Looking down upon the Cheshire Plains and beyond, on clear days you can see as far as Manchester and the Pennines.

There are plenty of walks in the National Trust area, such as the Wizards Walk that takes you to Stormy Point and other interesting features. However, none of these actually take you to the Wizard and the Wizards Well of Alderley Edge. 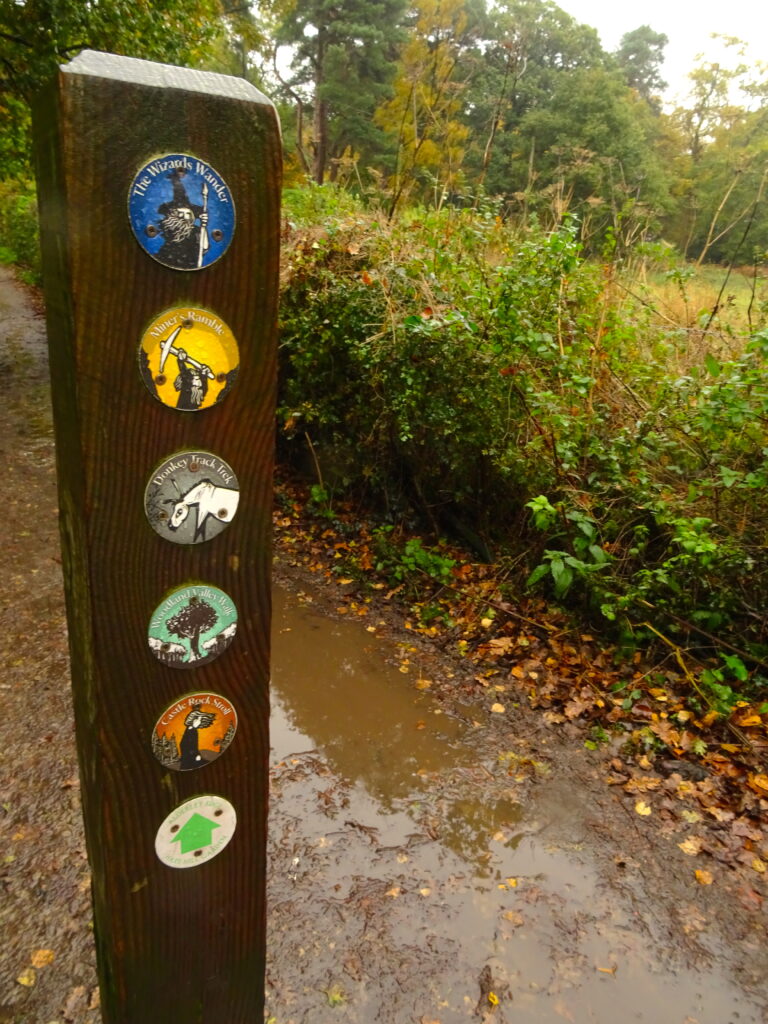 There Are Plenty Of National Trust Walks To Choose From, But None Actually Take You To The Wizard

The Wizards Well At Alderley Edge

The Wizards Well is a famous spot of this local legend, but to find it you will have to go beyond the National Trust Walks. It is worth the effort to find though.

Under one of the many small cliffs in the wood, you will find a small trough. A neolithic spring feeds the trough. Although the spring is usually just a trickle, the trough is always full. 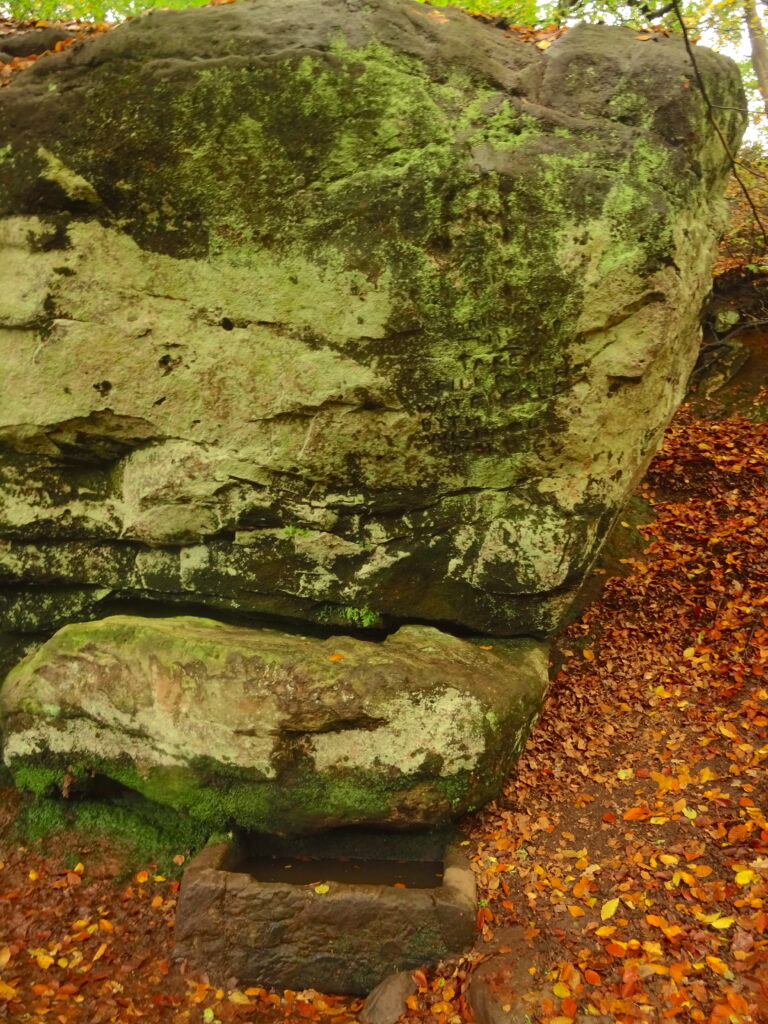 The Trough Is Always Full Despite The Spring Being A Trickle

The reason this spring has gained the name of the Wizards Well is due to the carvings above. On the rock face, you can clearly see the carving of a face, a man with a beard, obviously a wizard. Below the wizard’s face are carved some ruins, which say “Drink of this and take thy fill for the water falls by the Wizhard’s will”. 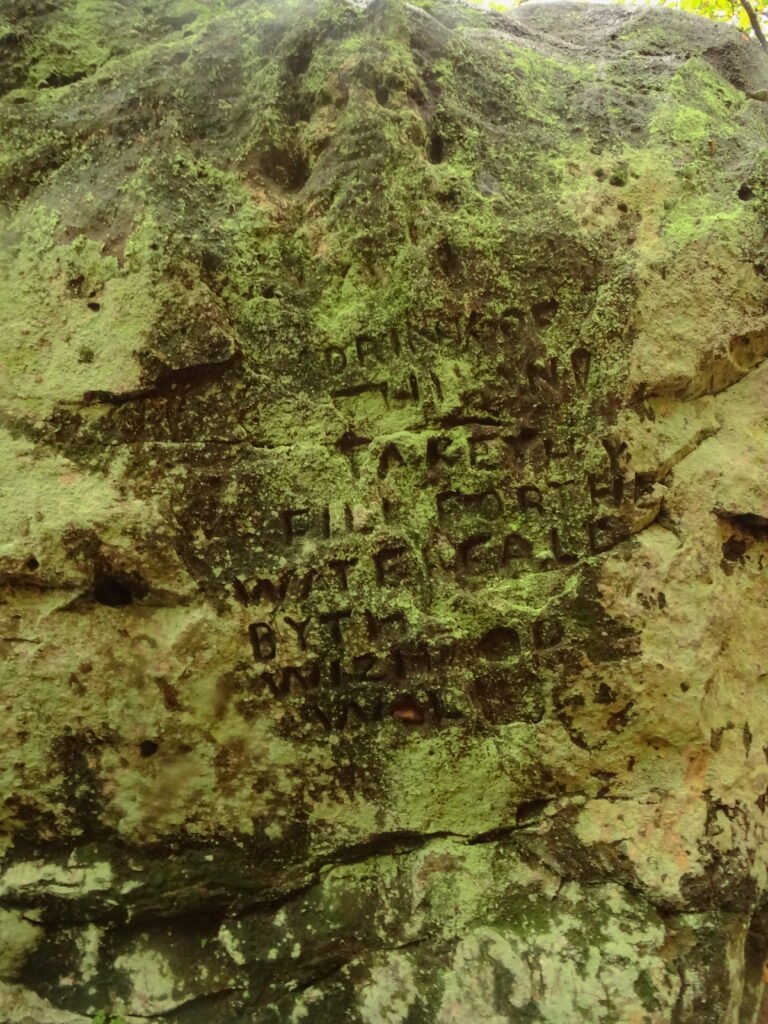 The Runes Are Seen Below The Face

The carvings are said to be the work of a local stonemason, Robert Garner, the ancestor of Alan Garner who used the legend as inspiration for his book. Robert Garner is said to have made the carvings in the mid-nineteenth century.

Visiting The Wizard Of The Edge

There are two main ways you can see the Wizard of Alderley Edge and the Wizard Well. You can either get there from the village itself or stop off at the National Trust Carpark. At the National Trust, there is also a The Wizard pub where you can get refreshments. But you have to pay for parking here, whereas you don’t have to pay at the layby, and you can access the pub from the layby. Where you go from is up to you.

If you’re planning to visit Cheshire, there’s plenty to see! Check out Nether Alderley Mill, Little Moreton Hall and Jodrell Bank. And if you’re looking for somewhere to eat in Cheshire, check out the Swettenham Arms

From the train station at Alderley Edge, you want to head up London Road, towards The Botanist. If you come to a triangular junction before you see The Botanist on your left, you have gone the wrong way. Carry on until you come to a kind of square roundabout (small English villages have the weirdest road layouts). Take the second left off this square roundabout to go up Macclesfield Road. Carry on down this road and you will see a layby on your left a little before the National Trust Carpark. You can stop at either of these to gain access to the WIzard. You can walk this from the village, or drive. It is about a 30-minute walk to the layby.

Finding The Wizard Well From The Layby

From the layby, you are much closer to the Wizard of the Edge than the National Trust Car park, and the Wizard is much easier to find. But it is likely that the layby will be full, especially on busy days.

From the layby, you simply need to follow the path into the woods. Not far down the path, you will reach Castle Rock (where a Neolithic site was discovered). Turn left here and follow the path down to the Wizard’s Well.

Seeing The Wizard Of The Edge From The National Trust Carpark

It is a little further from the National Trust Carpark, and if you are driving there is a charge to park, unless you are a member.

Don’t make the mistake I did from the National Trust though, I wrongly assumed that the Wizards Well was on the Wizards Walk. Although it is worth exploring this walk and others here, as there’s plenty to see, such as the Druid’s Circle and plenty of viewpoints over the Cheshire Plains. But if you actually want to see the Wizard you have to go off the National Trusts paths. 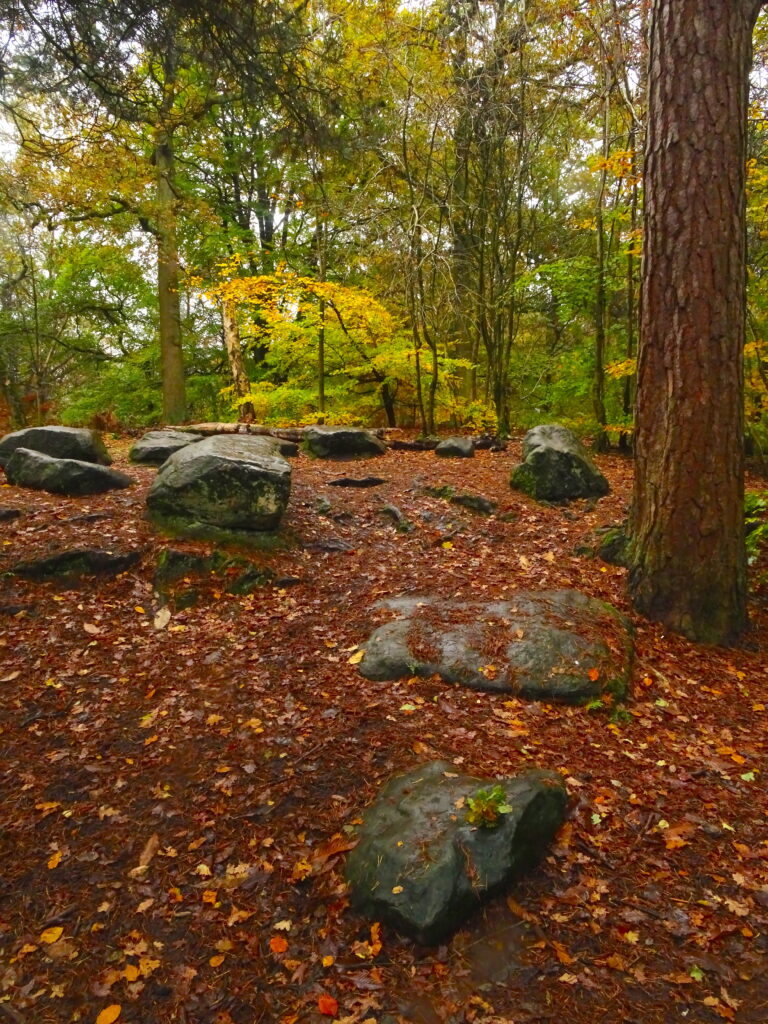 The Druids Circle Is Another Point Of Interest At The Edge

You can use the Wizard Walk to start on the way to the Wizard. However, once you get to the Armada Beacon, you need to take a detour. 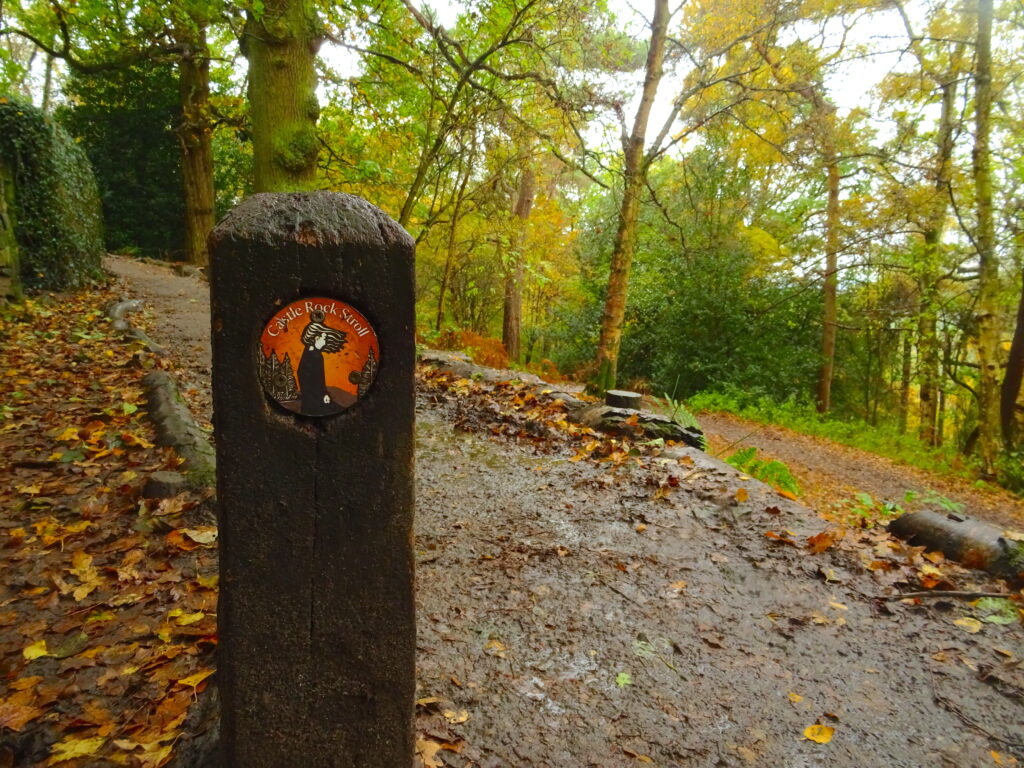 From This Point, You Want To Head Down To The Path Below Via The Steps

You will pass several cliff faces on your left. But the cliff face with the Wizard is unmistakable. The path bends outward from the cliff and the floor around the cliff is smooth. Find the trough which is the Wizards Well, look up and you will spot the Wizard. 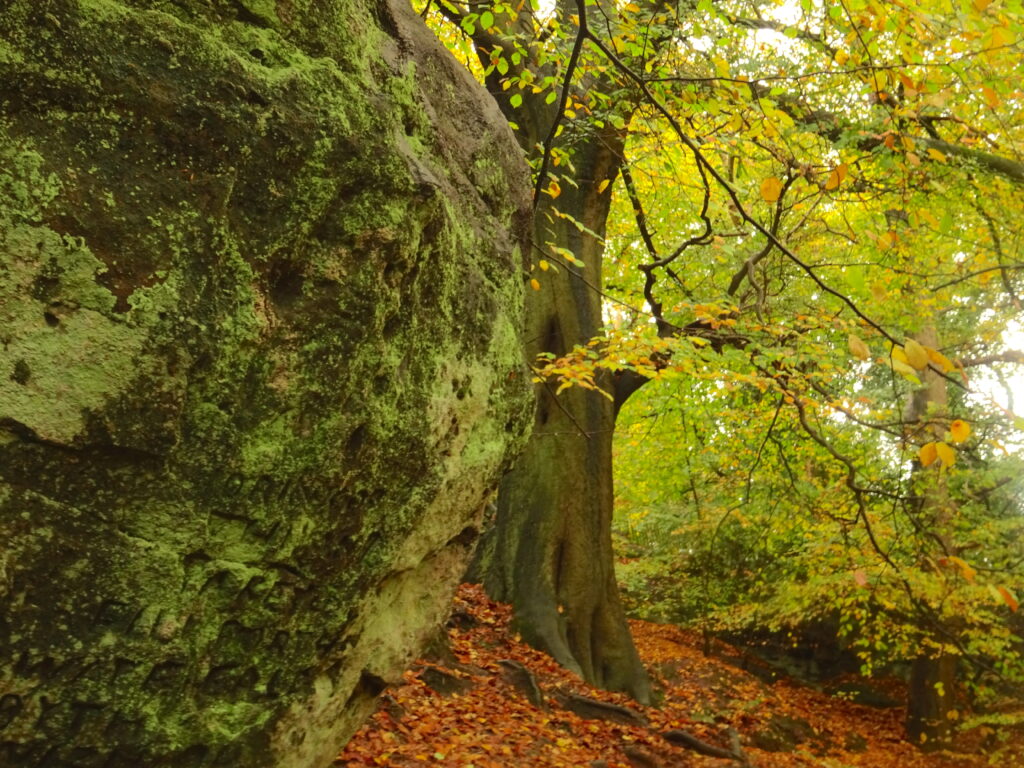 This Local Legend Is A Hidden Gem That Most Tourists Miss

No matter where you park, be sure to explore the Edge fully and not just see the Wizard. There are many more features and the viewpoints are spectacular. This hidden gem with a local legend in the Cheshire countryside s well worth a detour from the usual places that people visit in England.

Wanting to stay in Cheshire so you can find the Wizard of the Edge? Check out places to stay on HostelWorld 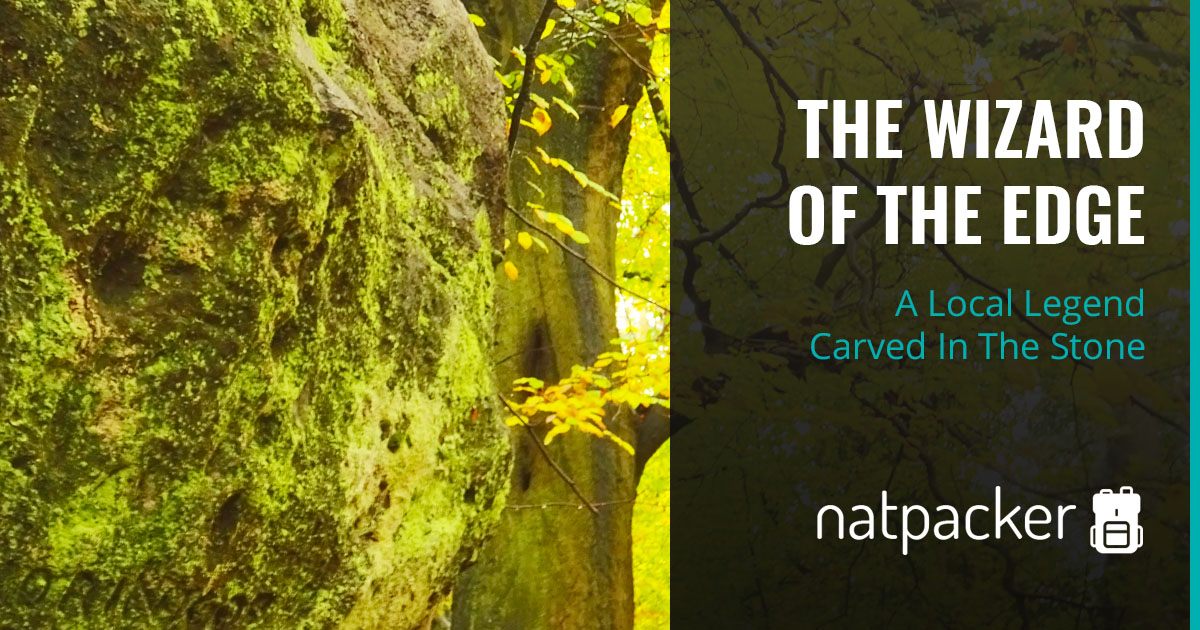