The Jodrell Bank Discovery Centre is located in Cheshire. You can locate it from miles around, due to the Lovell Telescope. Jodrell Bank is part of the University of Manchester’s School of Physics and Astronomy. Not only is it home to the famous Lovell telescope, but also three more, the “Mark II”, the “42ft” and the “7m”. eMERLIN is also hosted here, which is the UK’s National Radio Astronomy Facility.

Visit the Jodrell Bank Discovery Centre (check out reviews here) to learn about the famous Lovell Telescope and the mysteries of space. There are also gardens, a cafe and play areas. But it is a ‘Radio free’ zone, so ensure your mobile is switched off, or on aeroplane mode, so that it does not interfere with the research going on here!

There are two exhibition areas at Jodrell Bank. One includes the reception, the other you have a short walk to.

From the reception, you walk through a ‘starry tunnel’ to reach the first exhibit. Here there is an Orrery, which is a mechanical model of the solar system. Directly across from the entrance is the handle which you can turn to make the planets move. Around the room are interactive computers which you can use to learn about the planets and the orrery. Here you can also learn about our galaxy and others. 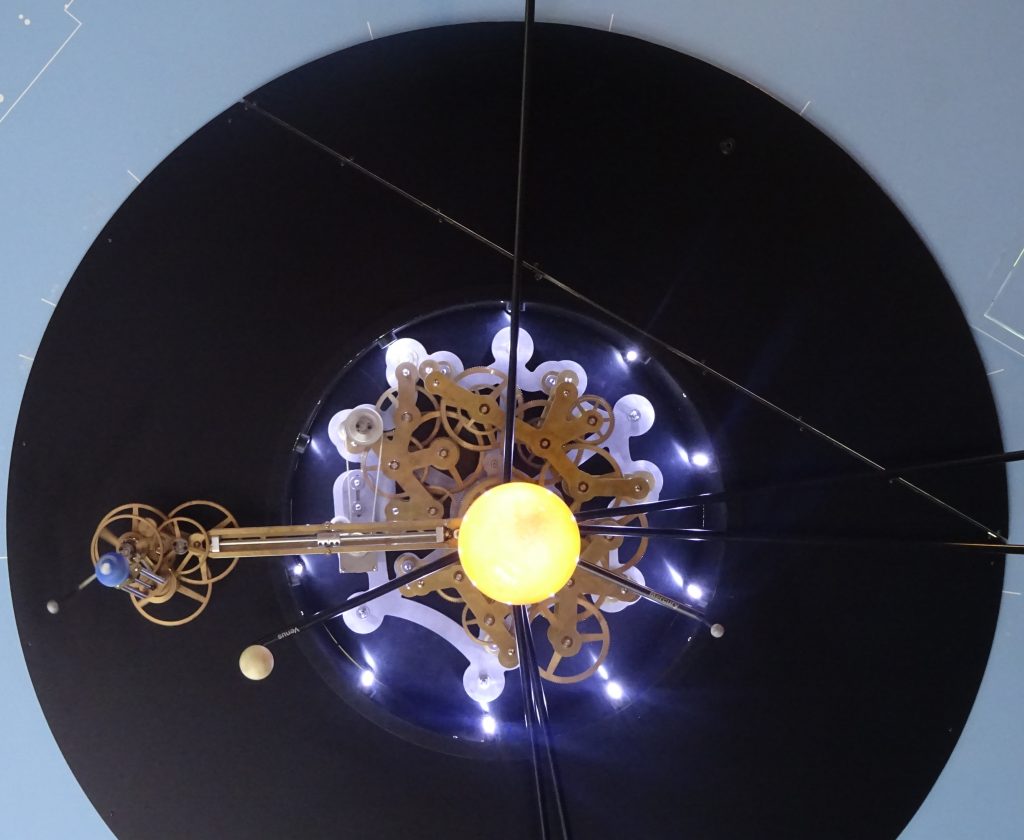 Outside and a short walk from the first exhibit you come to the building that holds the Space Pavilion. Here you can learn about the Lovell Telescope, it’s use and mysteries of the Universe. Hear what the Big Bang sounded like and learn through hands-on exhibitions. There is also a ‘film pod’ with short films about the Lovell telescope and more.

There are more than play areas outside! There are plenty of information signs, interactive learning and gardens.

The Whispering Dishes And Around

Two dishes opposite each other, one person steps in one and aon in another. Follow the instructions and whisper into the correct spot – your friend in the other dish will be able to hear you clearly! This is just one of the interactive sciences bits outside – they’re not just for kids! Signs next to each interactive display explain the science behind the fun. 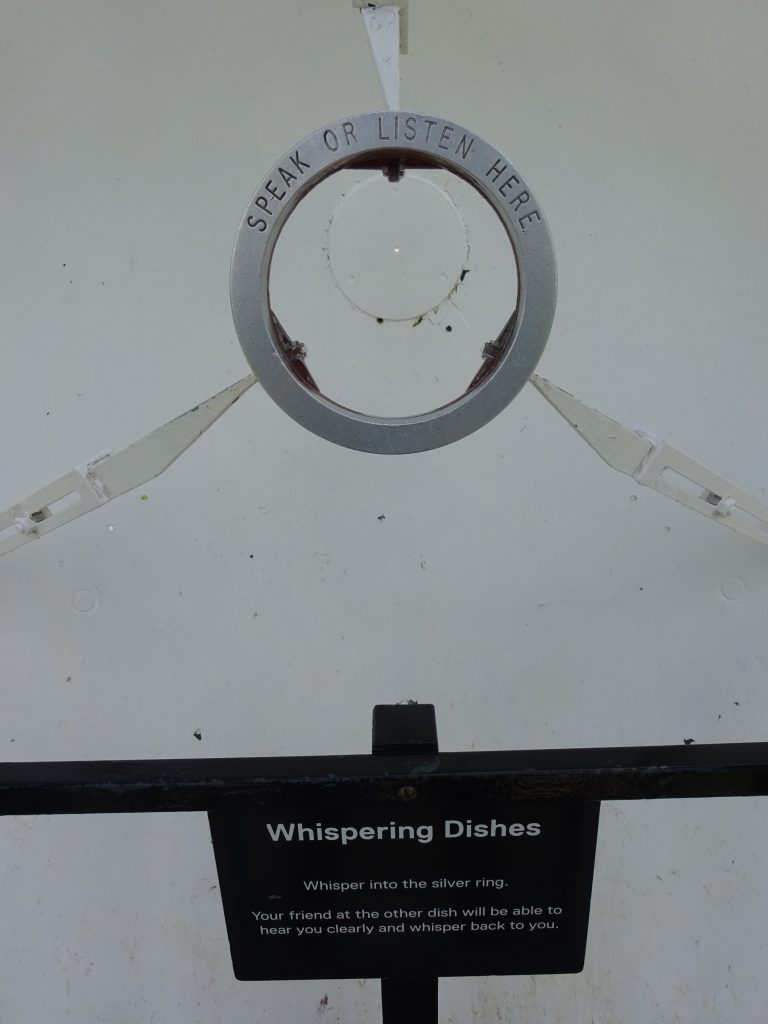 Wander into the gardens for a stroll or maybe even a picnic! Covering 35 acres and housing 3,000 trees and shrubs you can easily lose yourself in here! The tree collection was begun in 1972 by Sir Bernard Lovell and was opened to the public in 1976.

Another of Lovells’ collections can be seen at the Quinta Arboretum, located behind the Swettenham Arms.

In the gardens, you will find beehives, ponds, a bird hide and orchard. The garden is home to an Arboretum (tree collection) which houses trees from around the world, which were gifted to Sir Lovell during his travels to observatories and universities around the world. The gardens include two national tree collections, Sorbus (Rowan and Whitebeam) and Malus (ornamental Crab Apple). These tree collections display beautiful blossoms in the spring, which change to berries and fruits to the changing colour of the foliage in the autumn. 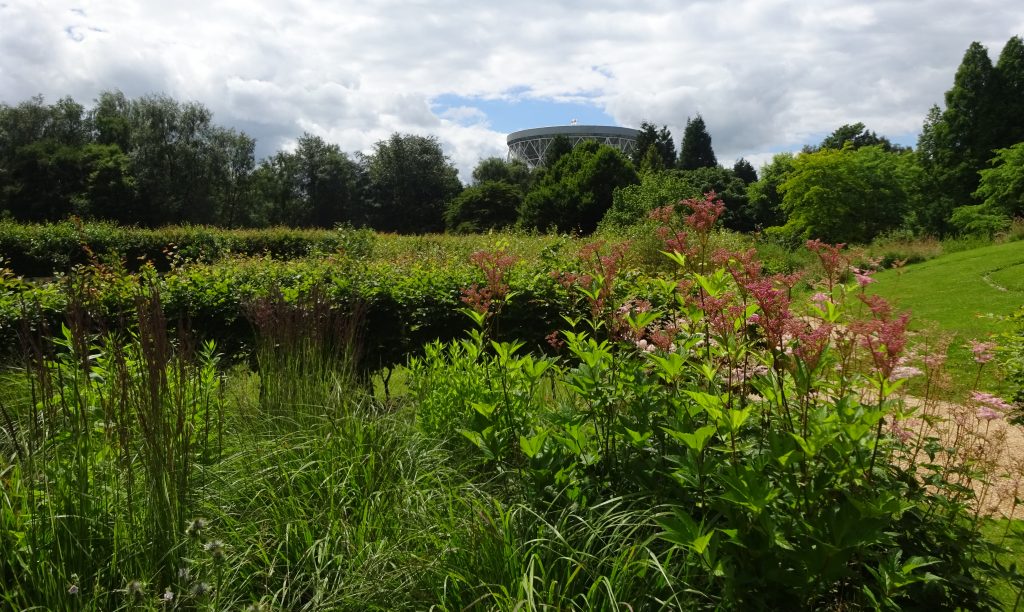 There is also the Galaxy Garden to explore. There are seven smaller gardens within the Galaxy Garden, each with its own theme. From the Big Bang through to our current solar system each garden is inspired by the research carried out here.

The Lovell Telescope is a landmark in the world of astronomy and is an easily recognised feature of the Cheshire countryside. The telescope has been used since 1957 to probe the mysteries of space. It is still one of the biggest and most powerful radio telescopes in use today. 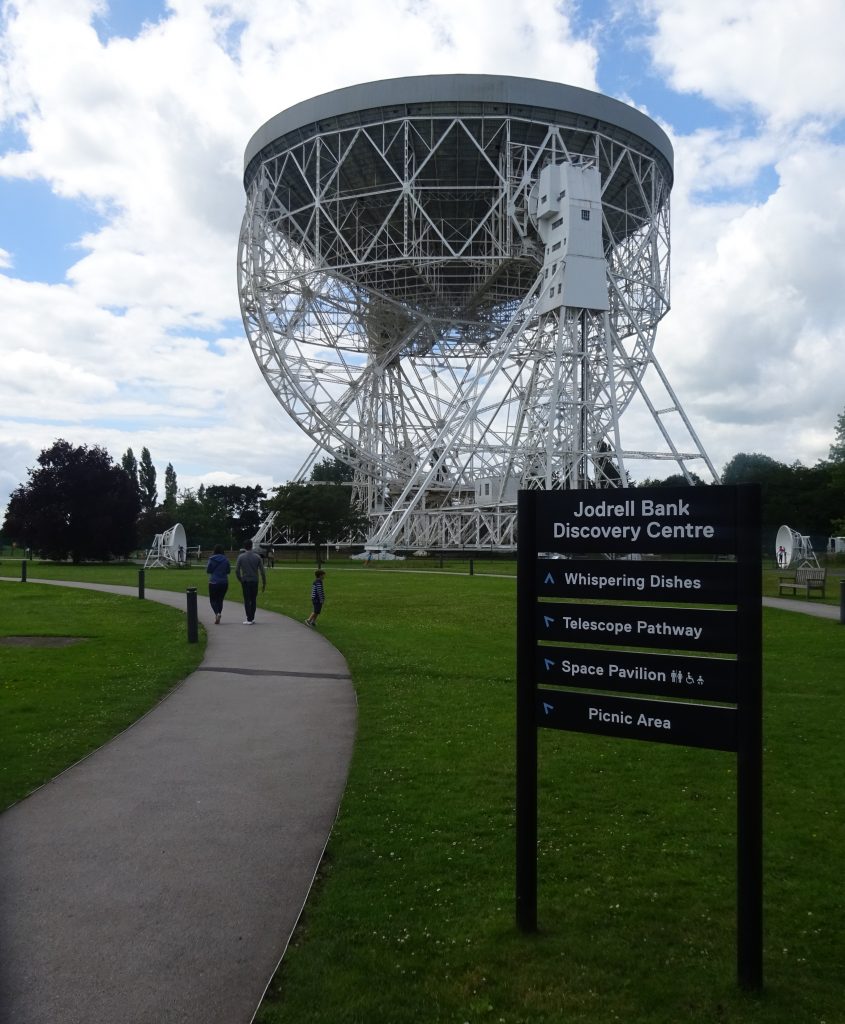 How The Lovell Telescope Works

The Lovell Telescope works in the same way as the Whispering Dishes, it is a paraboloid shape. When the telescope is pointed at an object, radiowaves from that object are reflected from the bowl to a focus box on the top of the central tower. A small ariel then picks up the waves and directs them to a sensitive radio receiver.

The Lovell Telescope is completely steerable and so can track objects. The whole telescope can be rotated on the circular railway tracks that it sits on. Whilst the bowl itself can be tilted so that it faces the horizon or directly up into the sky. More than 60 years after the Lovell Telescope was conceived, there are only two fully steerable, larger telescopes in the world – one in Germany and one in the United States.

Once the signal has been received, it is amplified and sent down a cable to the observing room, where an astronomer can look at it. The astronomer can measure the signal’s strength or polarization. Alternatively, a spectrum can be made so that more information can be deduced from the source of emission.

The Lovell Telescope is an amazing feat of engineering. Here are some facts about its structure: 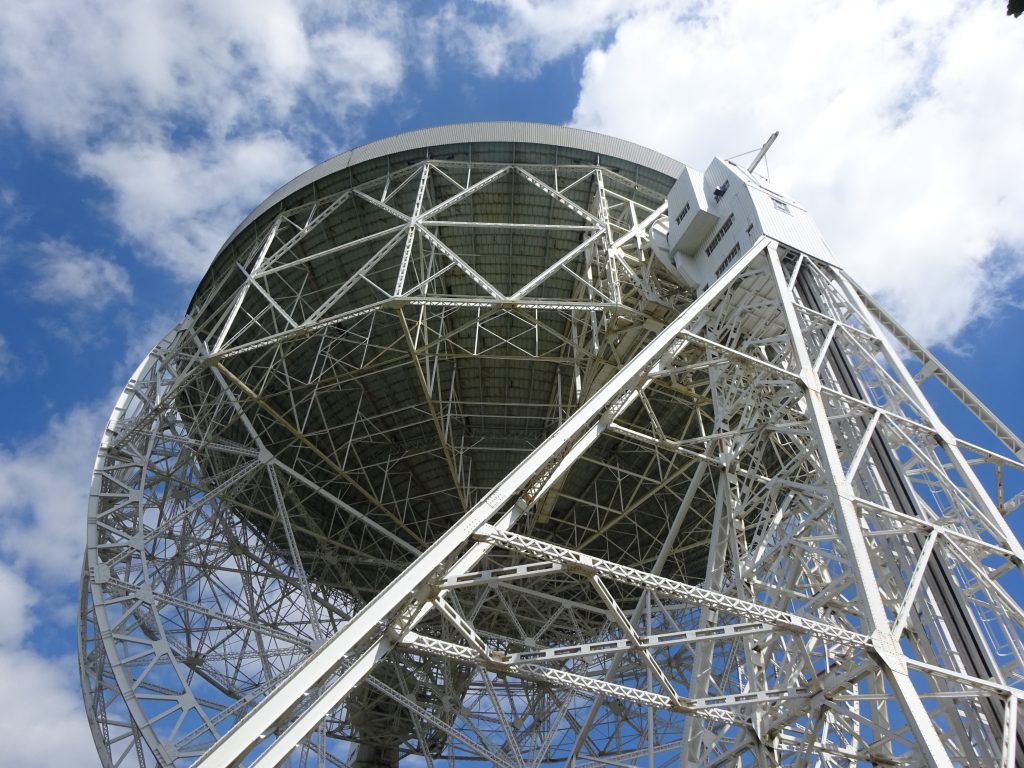 The Planet Pavilion Cafe commands an amazing view of the Lovell Telescope. There is also a patio area for use in nice weather. Here you can sample a range of food and drink including breakfasts, sandwiches and hot lunches.

Since 2016, the Jodrell Bank Discovery Centre has hosted the Blue Dot Festival. This festival his not just about the music, but also has live science experiments, immersive artwork and expert talks. The festival takes place in July every year and is named after a famous photograph of planet Earth, which is called th Pale Blue Dot.

The Blue Dot Festival is a great Cheshire Festival. With seven music stages, hands-on science, including family encounters, comedy, science talks, a microbrewery tent and a cocktail bar. There’s certainly plenty to do at the Blue Dot. Past line-ups have included New Order and The Chemical Brothers for music and science talks have included Brian Cox and Richard Dawkins.

Camping and space for live-in vehicles are available. Boutique camping is also available. The Jodrell Bank Discovery Centre is not just for kids! Here you can have fun learning about the Lovell Telescope and its’ role in research. With interactive displays, there’s loads to do. And if you need a break from physics and astronomy, you can have a wander in the gardens or head to the cafe! Just remember to keep your phone switched off so that it doesn’t interfere with the research!

Want to visit? Check out accommodation near Jodrell Bank on Tripadvisor. 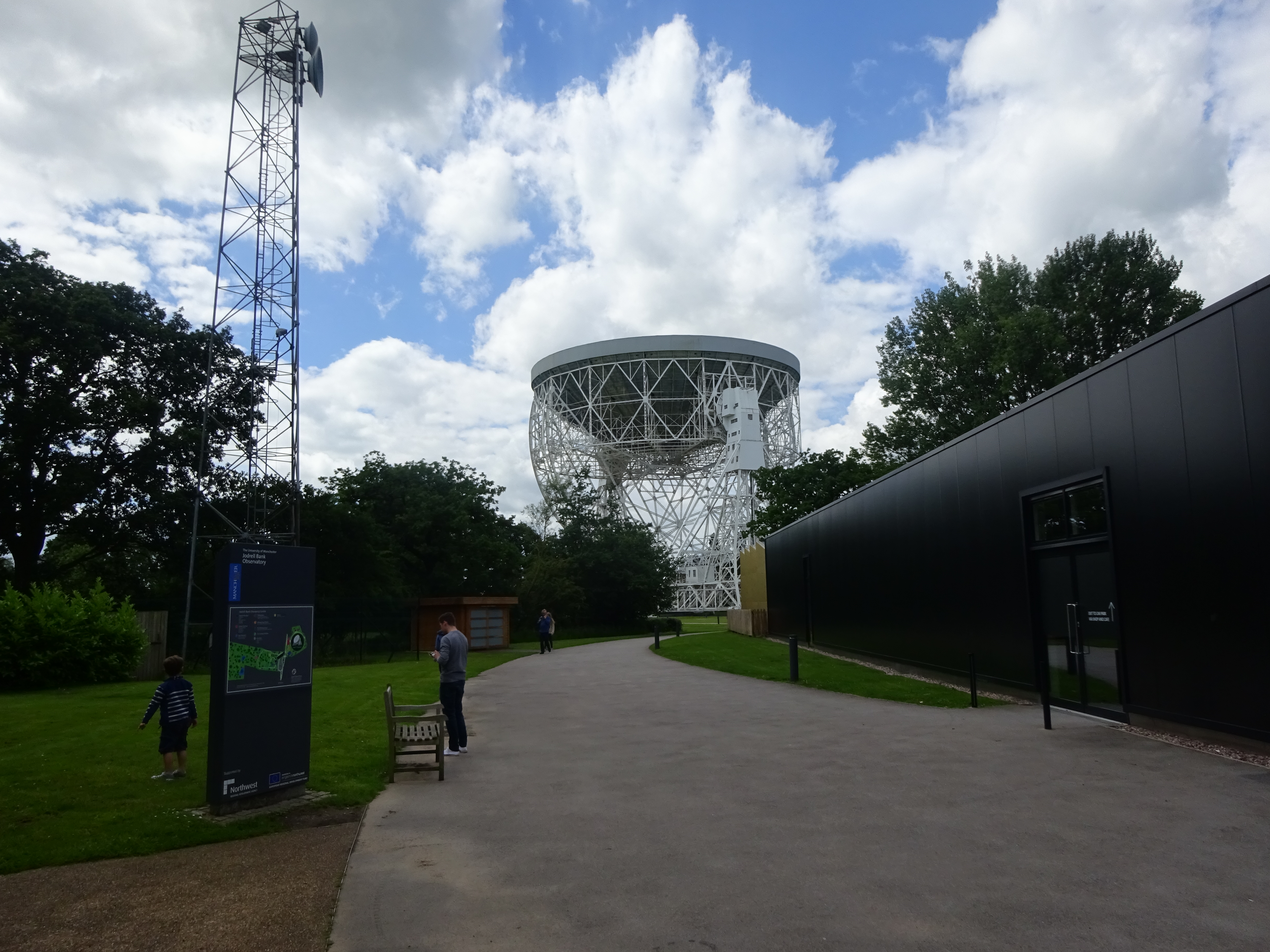