Coit Tower is one of the lesser-known tourist destinations in San Francisco, despite it being one of the best viewpoints in the city, and that’s before we even start talking about the tower’s incredible history. Most people think of the Golden Gate Bridge or Alcatraz when thinking of things to do in San Francisco, and while these are definitely worth seeing, if you have the time you should definitely head to Coit Tower too. This memorial tower has brilliant views of the city and stunning murals inside.

The History Of Coit Tower

The history of Coit Tower begins with Lillie Hitchcock Coit. This woman was born in 1843 and was a wealthy socialite. She was known to be an eccentric character in the city.

Before 1866 there was no city fire department in San Francisco. Instead, firefighters were volunteers, and Coit was a “fire chaser”. This began when she was 15 and she witnessed a fire response on Telegraph hill. The firefighters were short-handed, so she threw down her books and helped out. After this experience, she became the Engine Co. mascot and would jump into action whenever she heard a fire bell.

Lillie Hitchcock Coit died in 1929, and it was her fortune that funded the building of the tower four years later. 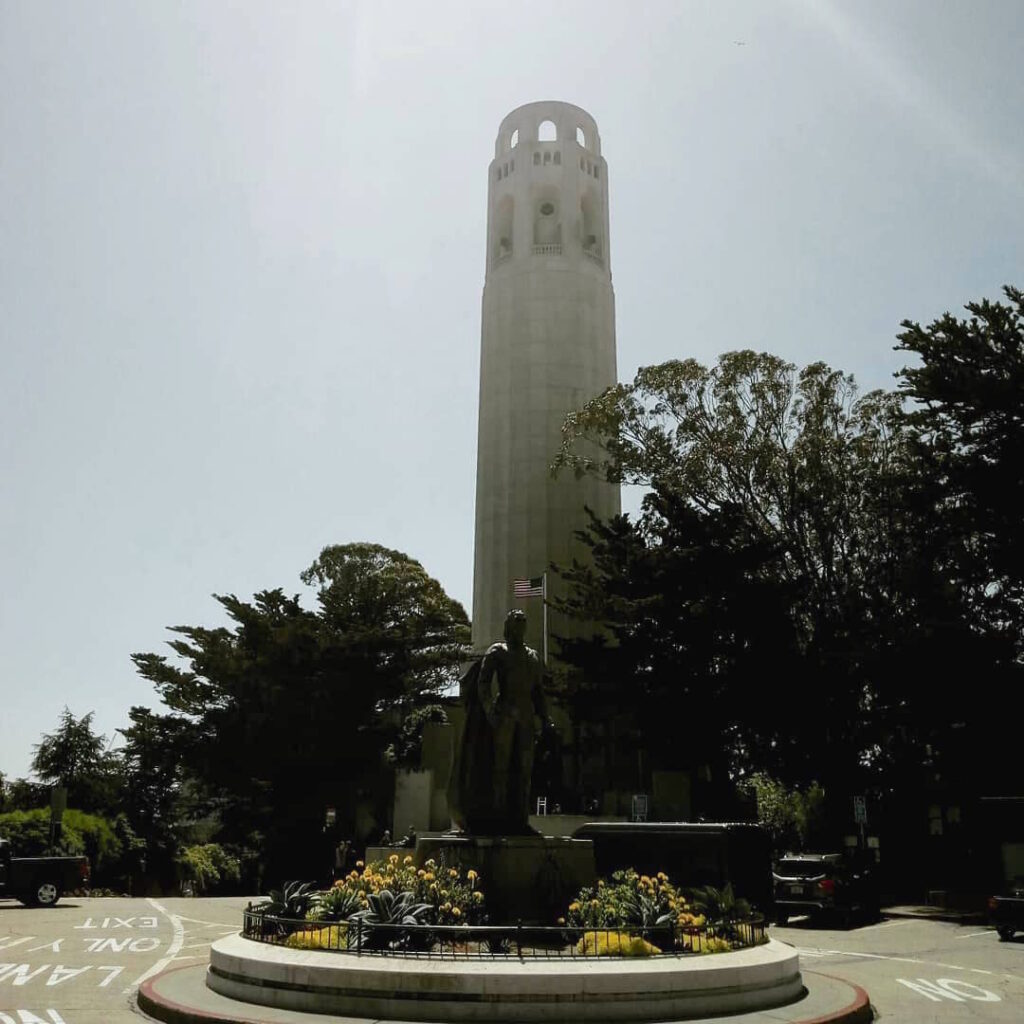 In Coit’s will, she specified that a third of her fortune, which was around $118,000, should be spent “for the purpose of adding to the beauty of the city I have always loved”. The funds were spent on Coit Tower and a monument to the volunteer firefighters, which can be found on Washington Square.

Coit Tower is also known as the Coit Memorial Tower as it is dedicated to the volunteer firemen who died in the city’s five major fires.

The tower was built between 1932 and 1933. Designed by Arthur Brown Jr and Henry Howard, it is built in the Art Deco style. The slender, white concrete column was listed as a San Francisco Designated Landmark in 1984. In 2008 the tower was added to the National Register of Historic Places.

It is not just the views of San Francisco from Coit Tower that you should visit for. Inside are some incredible murals.

The murals formed the pilot project of the Public Works of Art Project. 26 artists worked on the murals and were supervised by Ralph Stockpole and Bernard Zakheim, who sought the commission for this work in 1933. Most of the artists were faculty and students of the California School of Fine Arts. 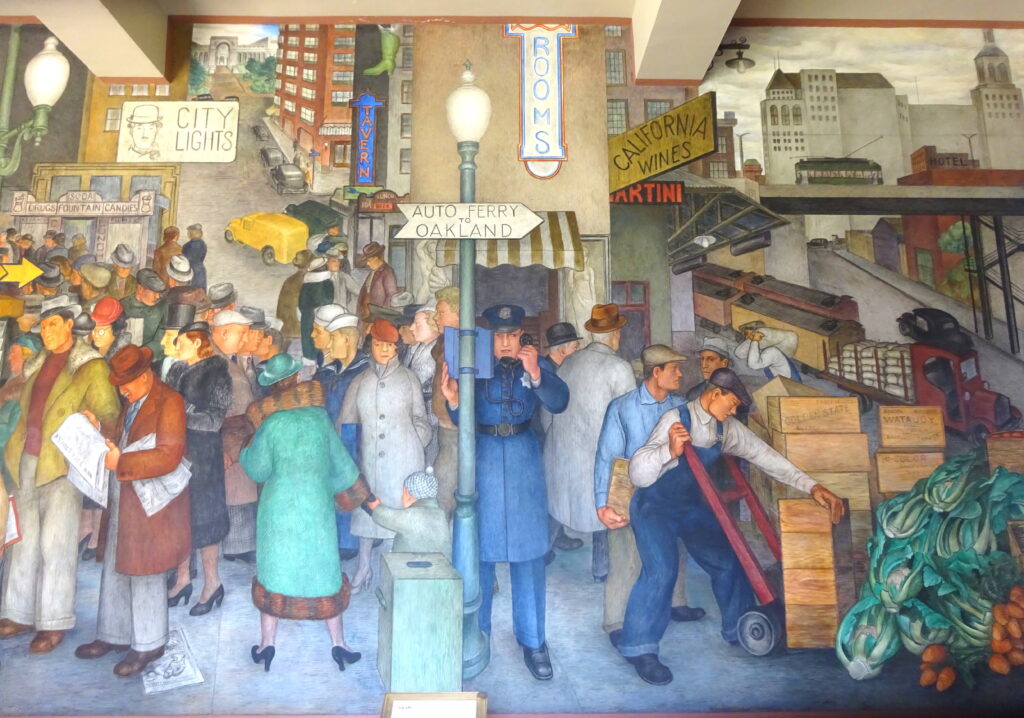 One Of The Murals Showing Everyday Life In San Francisco 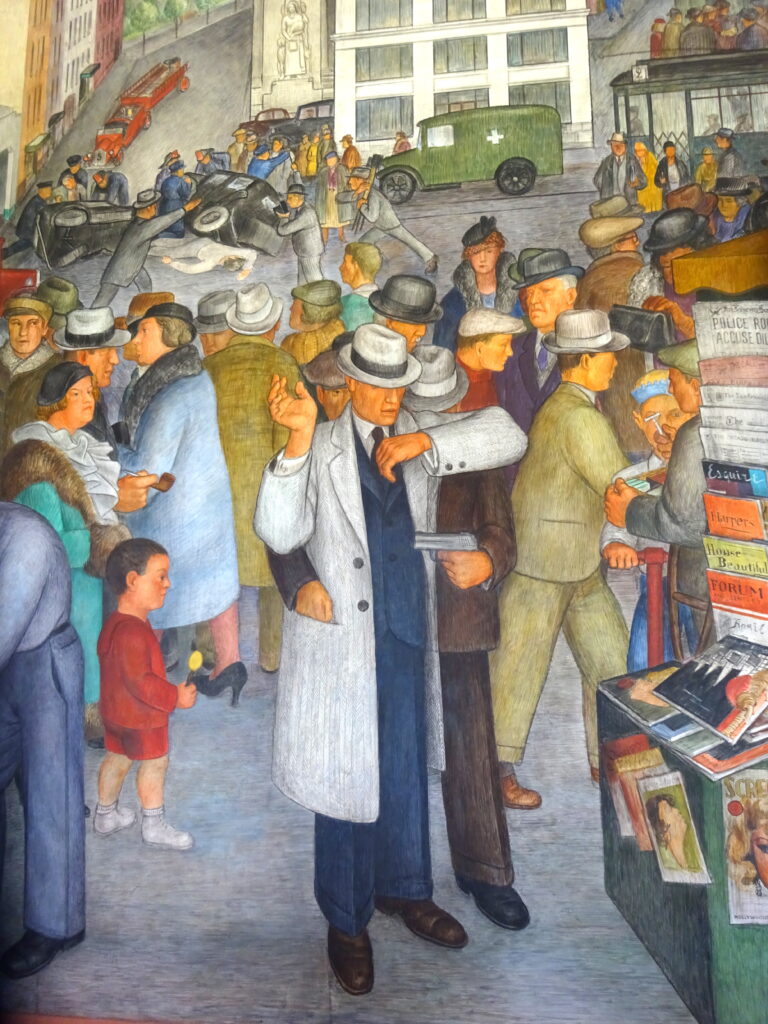 Some Of The Murals Have Leftist Themes 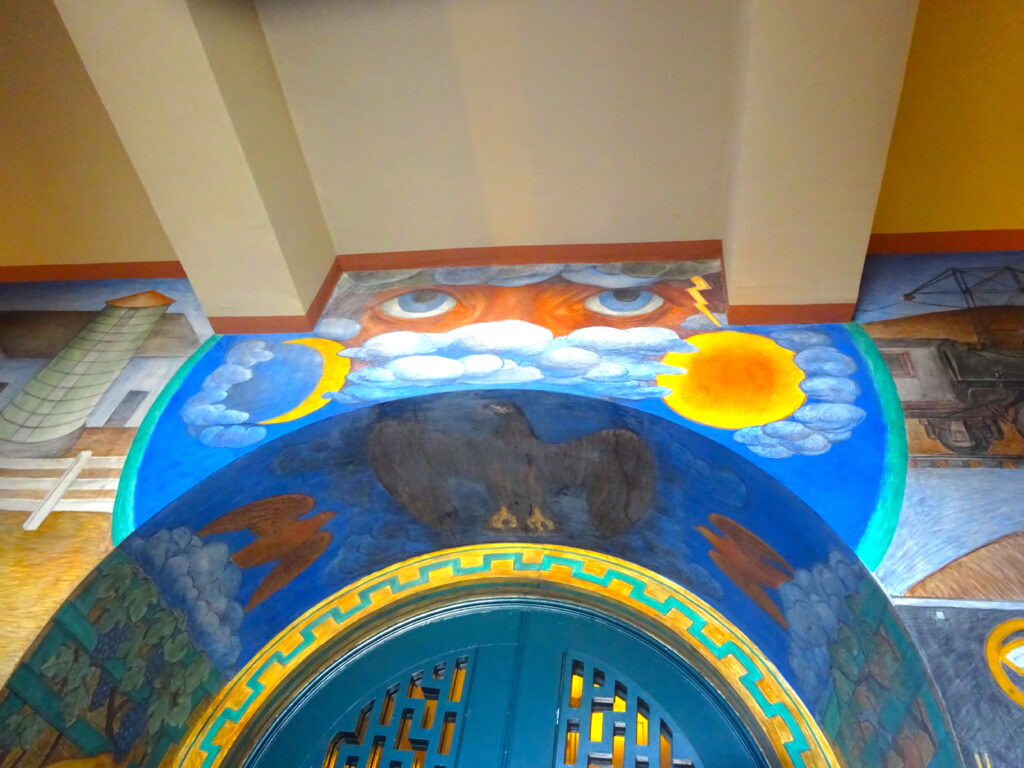 The Murals Themselves Are Worth Seeing, Even If You Don’t Go To The Observation Deck

For many, when it comes to getting a good view of San Francisco, it comes down to Coit Tower or Twin Peaks. I’d say do both, but if you only have time for one, it depends on what you want.

The tower has the advantage of being in the city centre itself. And although it is only a small tower, the views are still incredible. It’s also inside, so is the one to choose if the weather is bad. Also, if you want the addition of seeing some artwork too, then Coit Tower is for you. 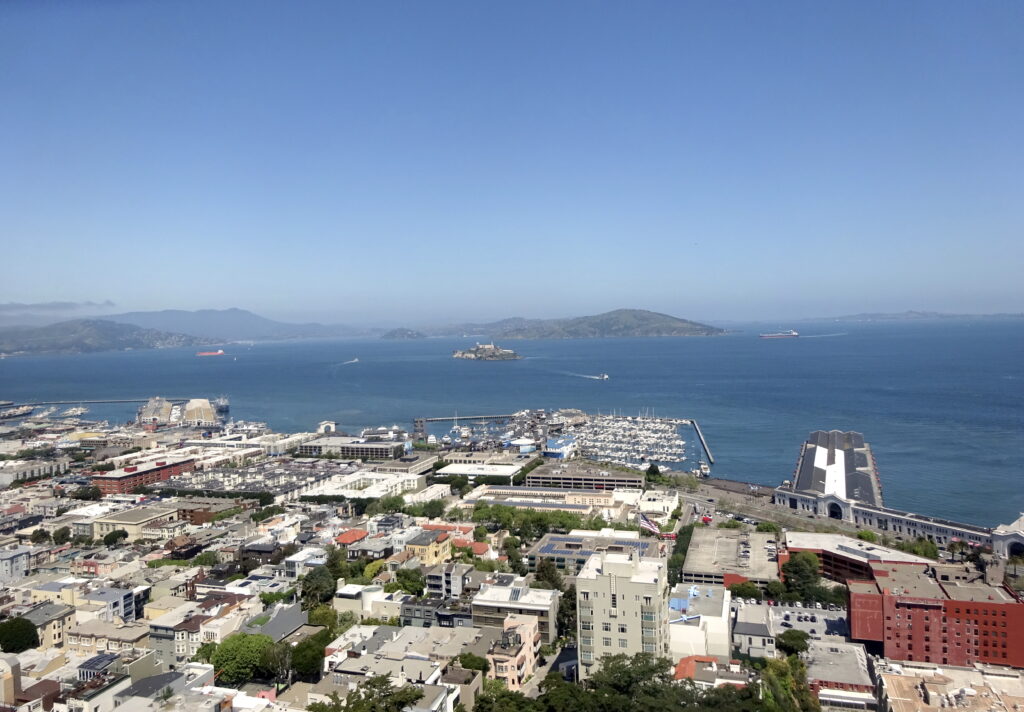 The Views From the tower Are Incredible

The Murals And The View

If you are on a budget, seeing the murals in the lobby area is currently free (at time of writing). Though it is only the murals on the ground floor that you can see for no charge. They are also only able to be viewed during the opening hours of the Tower. 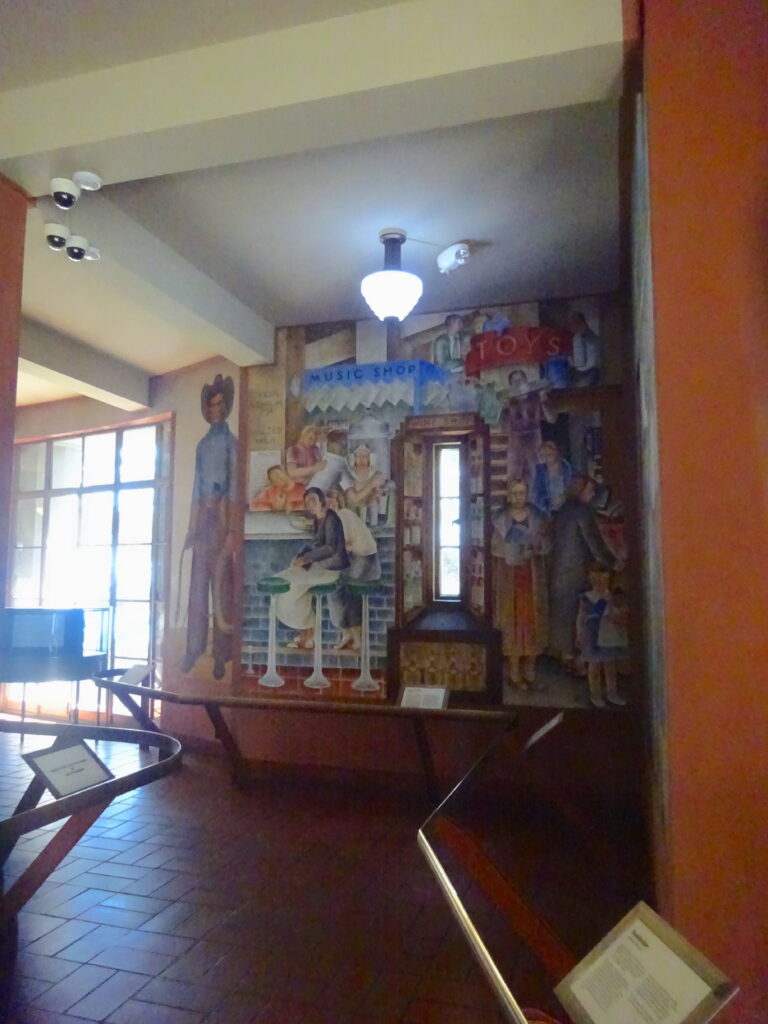 The Murals On The Ground Floor Are Free To See

However, if you want to see the view from the observation deck, there is a small charge. Personally, I think this small fee is worth it.

The windows of the tower are a little small, but they are pretty, and you can still see the view. From the observation deck, there are panoramic views of San Francisco. On a clear day, the Coit Tower view can include many of the other tourist destinations, such as Golden Gate Bridge and Pier 39. 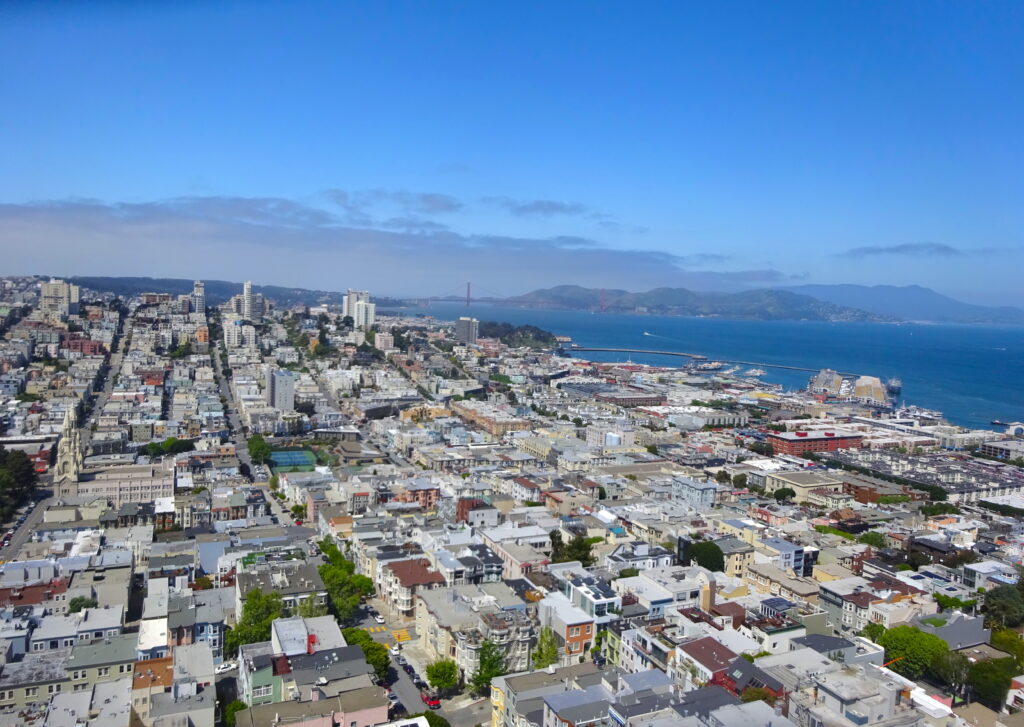 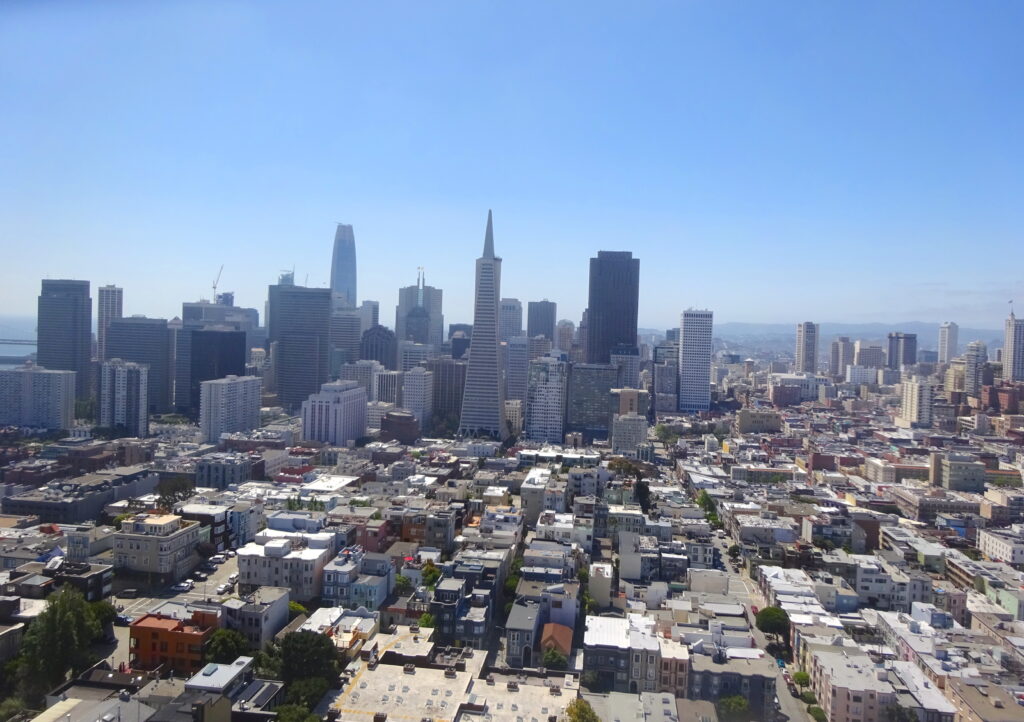 The View Towards The Business District Of San Francisco

If you like getting a seeing the views of a city, be sure to add the Empire State Building to your list for amazing views of New Your City and the Petronas Twin Towers for spectacular views of Kuala Lumpur.

How To Get To Coit Tower

Coit Tower is found in the Telegraph Hill area of San Francisco, in Pioneer Park. There are tours, like this one that will point out Coit Tower to you.

Depending on where you stay in San Francisco, you can either walk to the tower or get public transport. From the Downtown area, it is about a forty-five-minute walk to Coit Tower. But it is pretty much right behind the Green Tortoise Hostel.

Getting To Coit Tower From Downtown

From Downtown, you want to walk on Golden Gate Avenue toward Hyde Street (east). If you hit the large road of Van Ness Avenue, you have gone the wrong way. You want to find Market Street (which is on a corner) and turn left. Follow Market Street for about half a mile or more and then turn left to follow Kearny Street. Keep following this street, you will pass the Green Tortoise Hostel on your right, but keep going. You will be going uphill and up some steps. Just before this road turns to the left, you want to take the side street, Filbert Street, this will take you into the park and you can follow the paths to the tower, or follow Telegraph Hill Bolouvard round to the tower.

If you would rather get public transport to Coit Tower, you want to catch either the #30 or #40 bus to Washington Square. Then you need to catch the #39 Coit Tower bus. 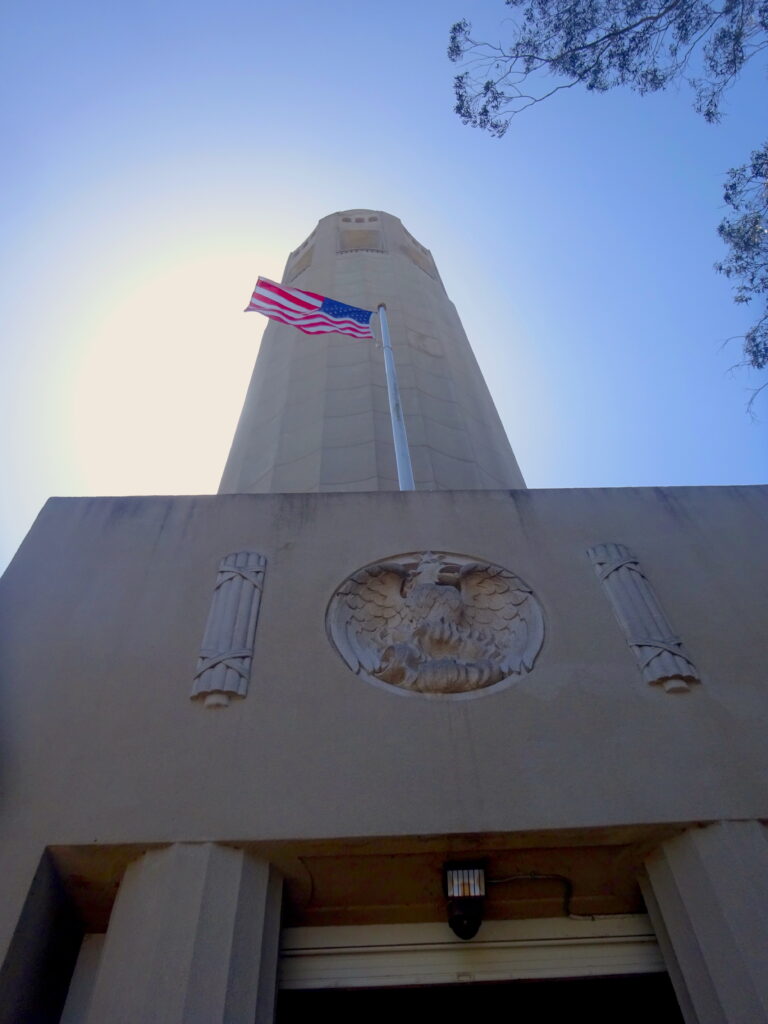 The Entrance To Coit Tower

Although this tower isn’t as well-known as other destinations in San Francisco, such as Alcatraz, it can still get busy in peak season. So if you are visiting San Francisco during this time I would advise that you either buy tickets in advance or get to the tower early.

If you’re looking for spectacular views of San Francisco, Coit Tower is a good choice. Even if you just go to see the murals, it is a stunning place to visit.

Want to visit Coit Tower? Book nearby hostels on Hostelworld (personally, I recommend the Green Tortoise). 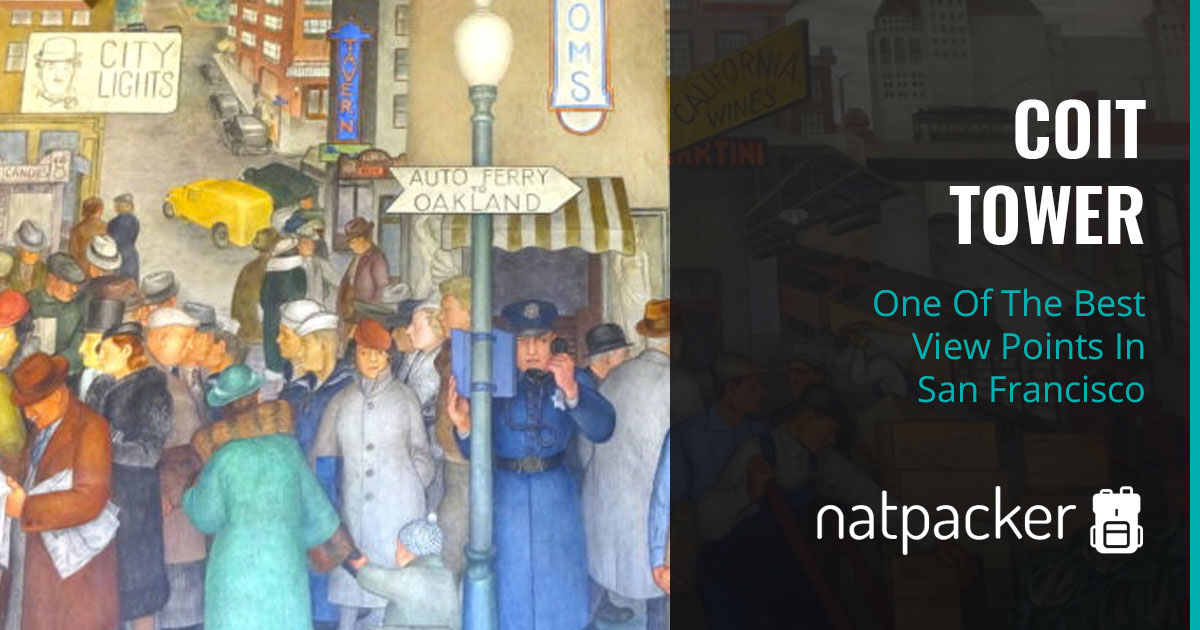