The Empire State Building is one of New York City’s most famous landmarks. The building is world-famous for it’s 86th and 102nd floors. It is on these floors that there are observation decks that offer 360-degree views of the Big Apple.

As a result of being located on 34th Street and 5th Avenue, this New York City attraction in a brilliant central location. The building is within walking distance from other attractions such as Central Park or Broadway. So it’s easy to fit a trip to the top into a New York adventure, and no New York trip is complete without seeing the city from above.

This famous building has come a long way from when construction began. Going over the full history would be a mammoth task, so instead, here is a quick overview of some of the main points in its’ history: 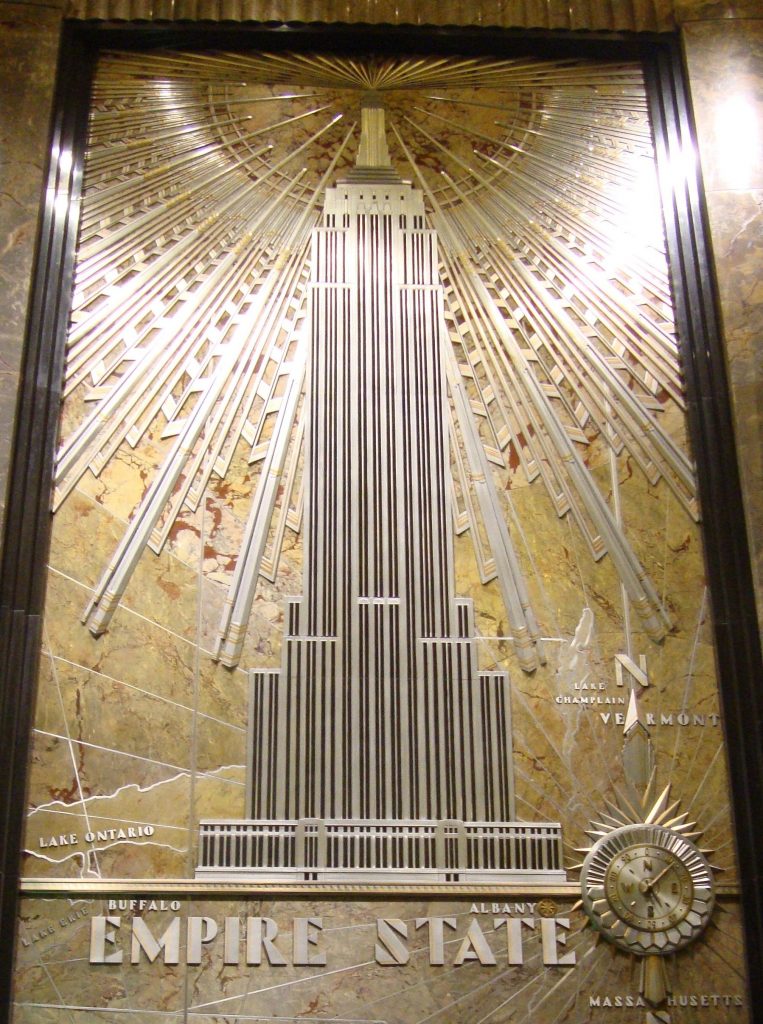 This Famous Skyscraper Has A lot Of History

1930 – Construction began on the 17th of March. The frame was raised at a speed of four and a half stories per week.

1931 – In this year the skyscraper was first opened.

1945 – On a foggy Saturday morning a B-25 Bomber crashed into the 79th floor. Luckily the construction of the building limited the spread of the fire, this meant that the building was open as usual on the Monday.

1955 – The American Society of Civil Engineers choose the building as one of the seven greatest engineering achievements in America’s history.

1956 – Four large beacon lights were added at the foot of the tower. These beacons were put in place to symbolise welcome and freedom to visitors and are known as the “Freedom Lights”.

Big Events And Awards In The Later Years

1981 – New York Landmarks Preservation Commission declared the building a landmark on the 18th of May.

1986 – The building was recognised as a National Historic Landmark by the National Parks Services U.S.

2007 – The building was listed as Number 1 on the list of America’s Favourite Architecture by the American Institute Of Architects.

2009 – On the 29th of September the new ceiling in the lobby was unveiled. This renovation took longer to complete than the construction of the building did.

2011 – The 2011 Green Leadership award was awarded by the U.S. Environmental Protection Agency.

If you want to know more about the history of this incredible building, check it out on the Empire State Building’s website.

For a bit more background information on this skyscraper, here are some answers to some common questions:

How Tall Is The Empire State Building?

When Was The Empire State Building Built?

Construction on the Empire State Building was completed on the 11th April 1931.

How Long Did It Take To Build The Empire State Building?

It took a record-breaking 1 year and forty-five days for the building of the Empire State Building to be finished. Construction started on the 17th March 1930 and was completed on the 11th April 1931.

How Many Stories Is The Empire State Building?

The Empire State Building has a total of 102 stories, one of the observation decks is on this top floor. 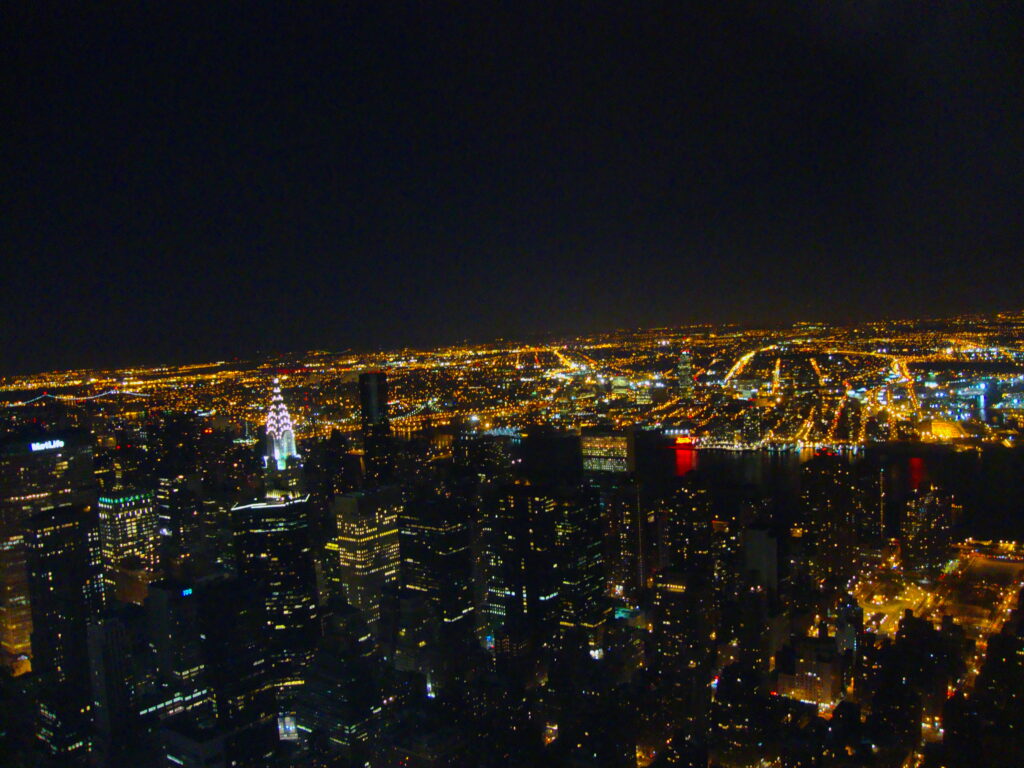 You Get Great Views From The Observation Decks

Who Was The Architect?

There was more than one architect that worked on the Empire State Building. These architects were William F. Lamb, Arthur Loomis Harmon, Yasuo Matsui and Gregory Johnson. They designed the building in Art Deco style.

The company that designed the building was Shreve, Lamb and Harmon Architectural Firm, William F. Lamb was one of the founders of this company.

How Much Did It Cost To Build?

The cost of the Empire State Building was $40,948,900 at the time of construction (this is would be a lot more in today’s money).

When Did The Empire State Building Open?

The Empire State Building was officially opened thirteen and a half months after the construction of the building began, on 1st May 1931. President Hoover pressed a button in Washington D.C. which turned on the lights for the first time, officially opening the building.

A trip to New York City isn’t complete without seeing the city from above and the Empire State Building has some fantastic views. Not only that, but inside the skyscraper, there are various exhibits and you’ll learn lots about the history.

The building is open every day of the year, so no matter when you plan a New York trip, you will be able to go up to the observation decks. Like all viewing areas, the best time to admire the view is at sunrise or sunset. However, these are also very popular times. If you want peace and quiet go after 10 pm.

When buying tickets to the go up this skyscraper, you can choose to go to just the main deck on the 86th Floor or go up to the top observatory deck on the 102nd Floor. Personally, I would recommend going all the way to the top for the full experience, but this is a bit more pricey. If your budget doesn’t allow this, you will still get incredible views from the Main Deck. 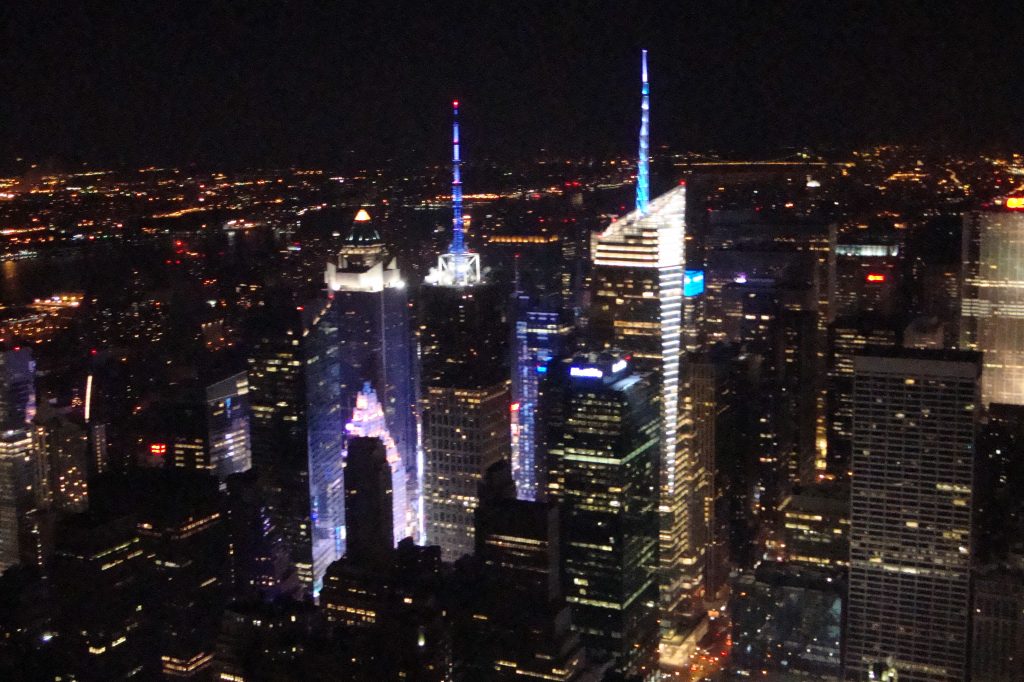 You can enter the lobby for free, but I would definitely recommend buying a ticket to head up to the observation decks.

Inside The Empire State Building

From 2018, visitors to this skyscraper enter from 20 West 34th Street. In the lobby, you will find digital ticket kiosks and an architectural model of the building, among other features.

As you make your way to the observation decks, you will pass through different exhibits. When I was there in 2010, there was a Sustainability Exhibit and the Dare To Dream Exhibit. But there are many more and different exhibits there now. These include exhibitions on the construction, opening, sustainability and it’s place in pop culture. 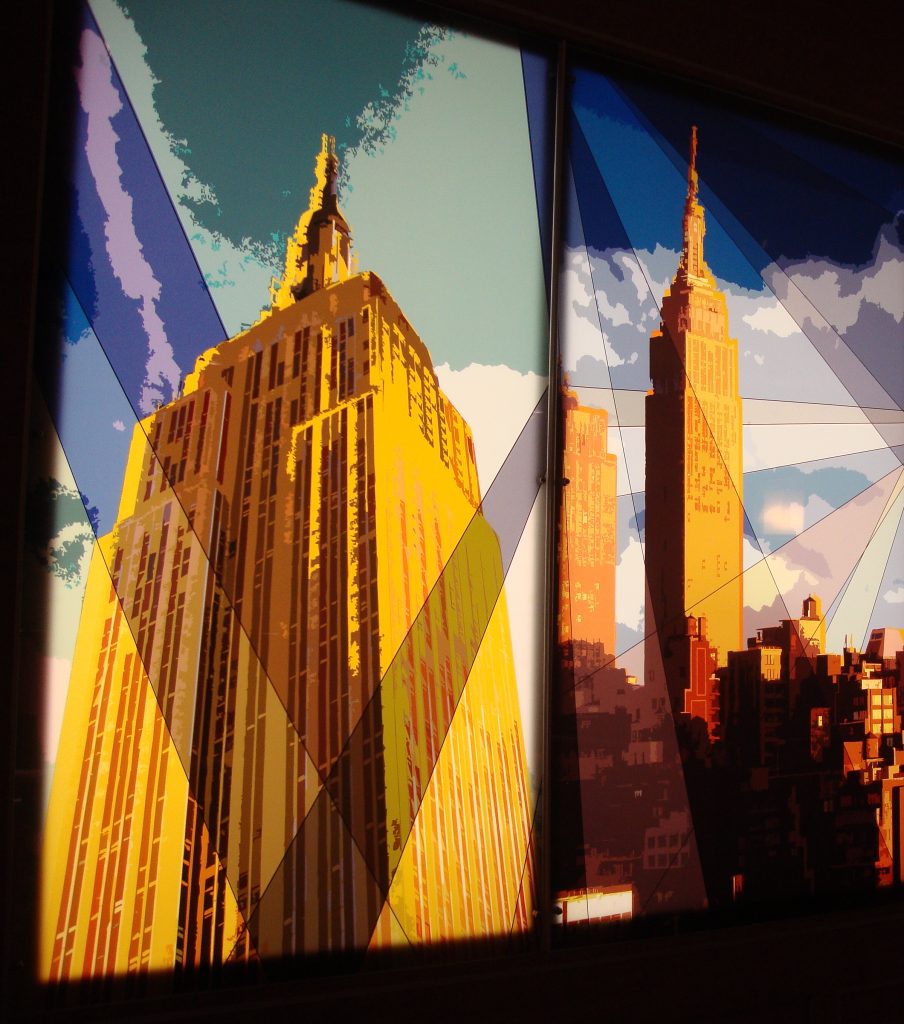 To find out what exhibits are on, check the official website.

Wrapping around the buildings’ spire, the Main Deck offers 360-degree views of New York. From here you can see other attractions like Times Square and the Statue of Liberty. You can also use the high powered binoculars for an even closer look.

Get sixteen floors higher than the main deck for even more amazing views. On a clear day you can see up to 80 miles away.

As an added bonus, to get to the top deck you must use the manually operated Otis elevator, which counts the altitude rather than floors. You can use this time to ask the operator lots of questions.

If you like views of a city, check out Coit Tower for views of San Francisco and the Petronas Towers for views of Kuala Lumpur

You can buy tickets to go to the observation deck on the day of your visit, but you do have to select a time, so you may have fewer choices or they may even be no tickets left, especially in peak season. You can skip the line and purchase tickets in advance with Get Your Guide.

If you’re in New York for a while, with a lot to see it might be worth buying the New York City Pass. This pass gives you access and discounts to loads of attraction in New York.

How To Get To The Empire State Building

The Empire State Building is centrally located on 34th Street and 5th Avenue, making it easy to add to any New York City itinerary. Because of it’s location and height it’s easy to find. if you’re exploring the city centre, you can easily walk towards it. Just remember the tourist entrance is now at 20 West 34th Street.

If you’re coming from slightly further, catch the subway to 34nd Street – Penn Station or 34th Street – Herald Square Station (depending on what line you are near). From these subway stations, it’s about a five-minute walk to the Empire State Building, just make sure you exit these stations onto 34th Street, then head straight towards the tall building. 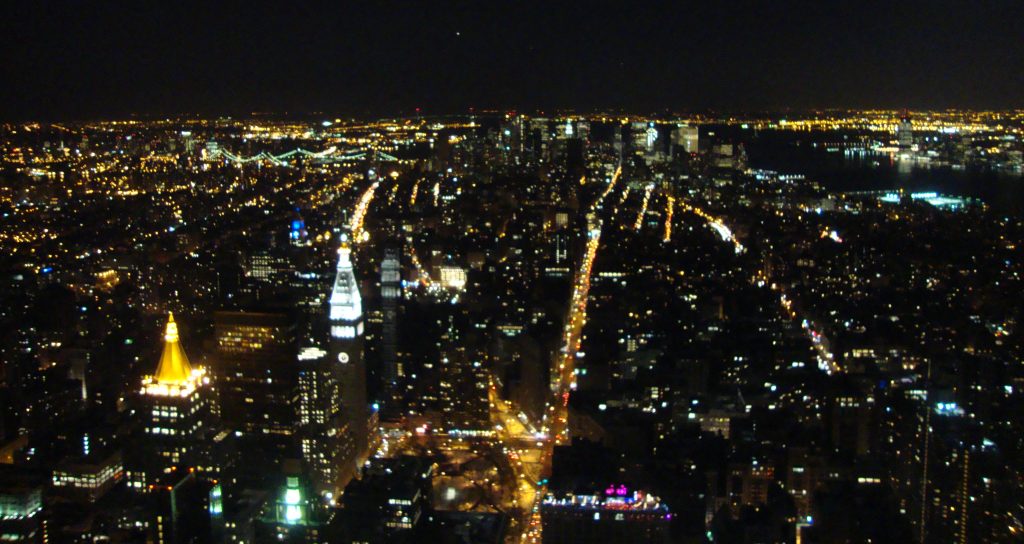 The Empire State Building gives you more than just a great view of New York City. There’s also lots to learn about the history and construction of the building in the exhibitions. And whether you go up to the main observation deck on the 86h floor or all the way to the 102nd floor, you will see incredible views of New York.

Planning a trip to New York? Check out accommodation on HostelWorld 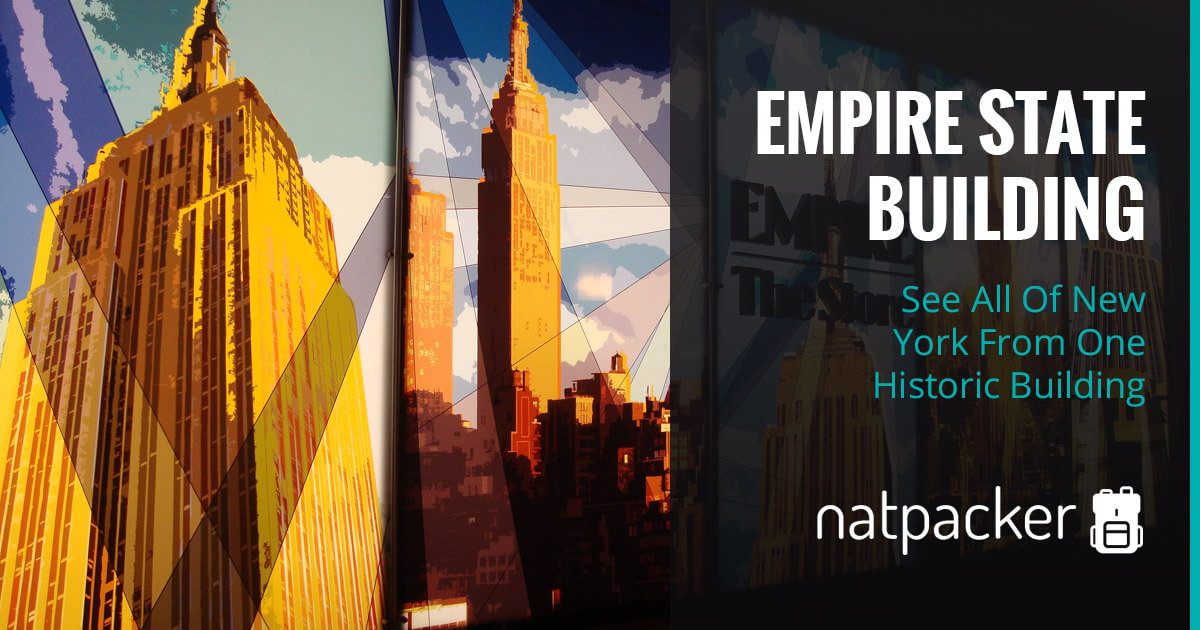