In the countryside of Cheshire, just 4 miles from Congleton sits Little Moreton Hall. This half timbered manor house is a Grade I listed building set on land that is a Scheduled Monument. It is now in the care of the National Trust and open to the public.

This old building dates back to the tudor period. It was built by the Moreton family and was owned by them for about 450 years. It took over 100 years to complete with family members adding to the building. The Moretons were obviously a well off family and the house was built to make an impression. With a moat around the building, which surrounds an inner courtyard, and more glass than most Tudor buildings, Little Moreton Hall still makes an impression today! There are also gardens to be explored!

Although the house was neglected for a while, it is now restored. This wonky house has a lot of amazing features and is full of history. It is amazing that it still stands! The building is both fragile and resilient.

The History Of Little Moreton Hall And The Moreton Family

Moreton is an old English name and roughly means “Farmstead on the Marshes. “Mor” meaning Marsh and “Tun” meaning Farm. The family were farmers but they bought more land to extent their estate and married into wealthier families. As time went by they became less reliant on the land, renting it out to tenant farmers, as well as having income from water mills and bloom smithies.

The Building Of The Manor

The earliest that the Moreton’s are recorded here is 1271, but the current house dates only to the 16th century. The north part of the house is the oldest bit. The north section was built for William Moreton between 1504 -1508 and comprises of the Great Hall and part of the east wing. There was also a service wing to the west, giving the original building a ‘H’ shape. 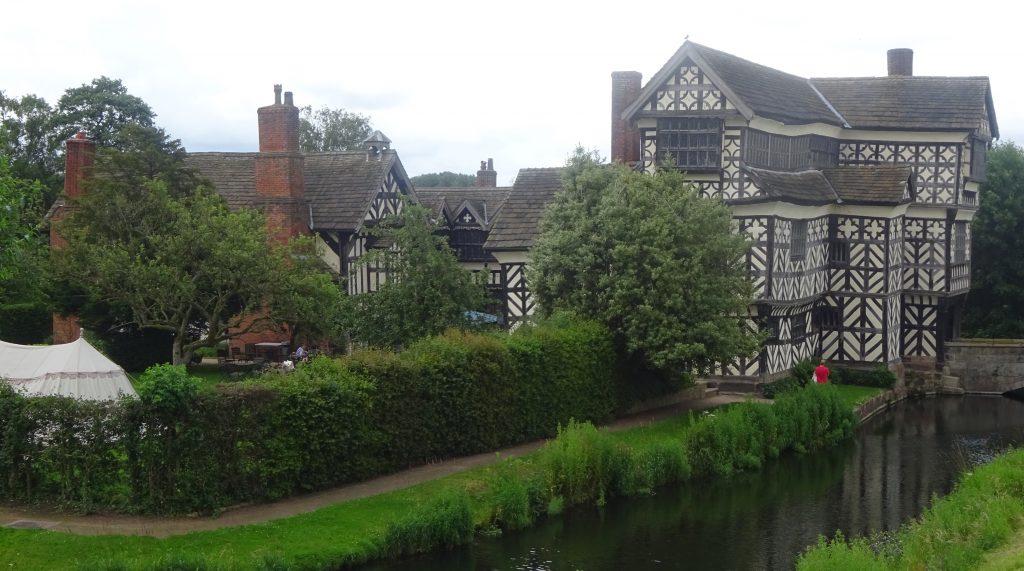 The east wing was extended to the south in 1508. This included the chapel and withdrawal room. This area also created more living quarters for the increasing family.

William II’s son, John Moreton, added the south wing in 1560-1562. The south wing includes the gatehouse and the third floor long gallery (which appears to be an afterthought). In 1610 a brew-house block and small kitchen was added and was the last major construction work to be completed. 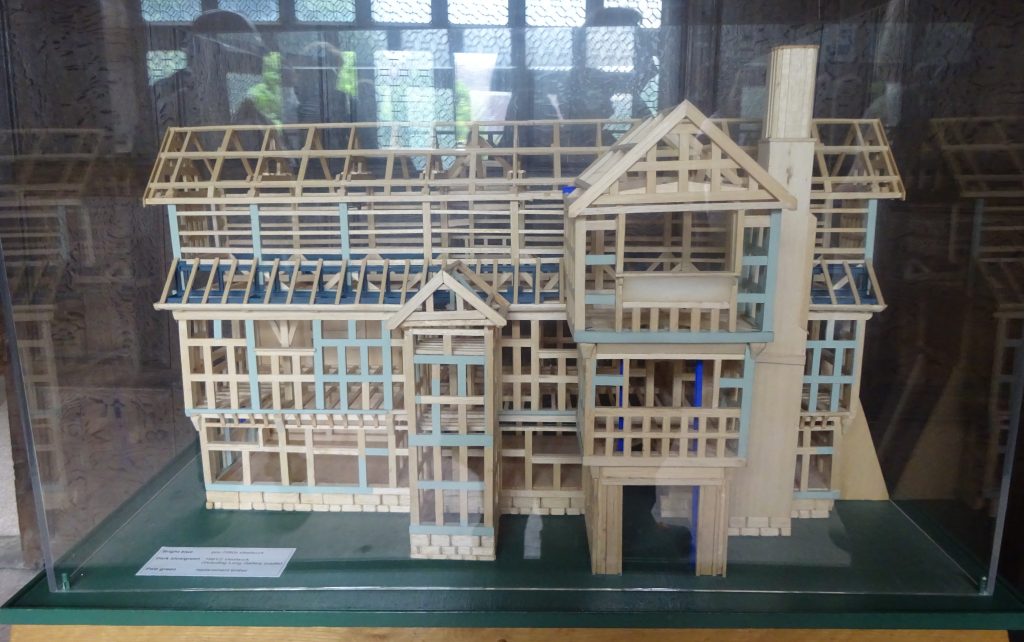 During the English Civil War the Moreton’s were avid Royalist supports, within a Parliamentary community. This changed the Moreton’s fortunes forever.

The house was requisitioned by Parliamentarians and used to billet soldiers. The family petitioned for the return of the property and were successful. They survived the war retaining ownership of Little Moreton Hall, but financially they were crippled.

In successive years the family tried to sell their estate, but were only able to sell a few bits of land. When William Moreton (unsure of the number) died in 1654, he left the family with a lot of debt. His heirs were forced to remortgage the estate. The Moreton family never recovered financially. By 1670 the Moreton’s no longer lived at Little Moreton Hall but instead rented it out to tenant farmers.

By 1847 the house was unoccupied and in a terrible condition. Parts of the building were beginning to rot and the chapel was being used as a storeroom.

In 1892 Elizabeth Moreton inherited the ruined house. Elizabeth was an Anglican Nun. She began the restoration work on the house. She began by restoring and refurbishing the chapel. In 1912 Elizabeth left the house to her cousin, Charles Abraham who was the Bishop of Derby. She left it with the condition that it must never be sold.

Little Moreton Hall has a lot to offer every visitor. Wander around the building to uncover all sorts of history and quirks. The wonky building and crooked floors give the house a charm of its own! You enter via the gatehouse on the south wing of the building.

Some Exterior And Interior Features

Firstly, notice how much glass is used in the building. Glass was extremely expensive in Tudor times, and so the Moreton family really were showing off! On one of the bay windows you can see the name of who built the house (William Moreton) and the name of the carpenter (an early form of advertisement maybe). 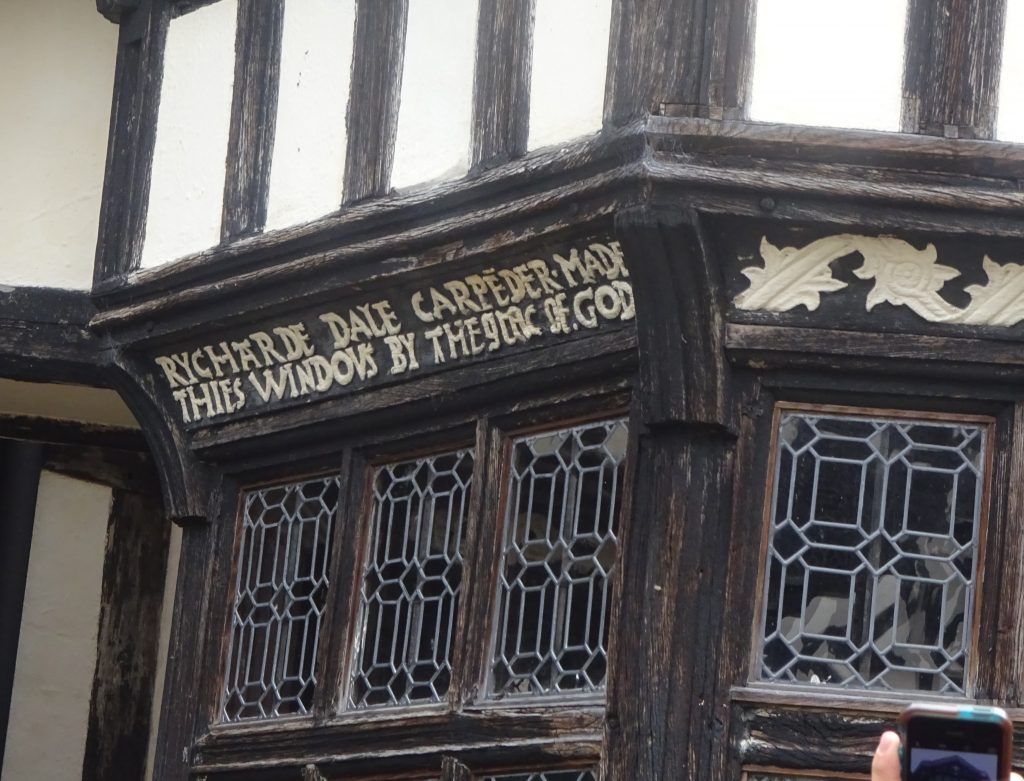 Throughout the building you will come across greyhounds everywhere – the Moreton’s animal that features on their family crest- as well as the family crest itself.

The lack of furniture allows you to get a good look at the panelling on the walls. There are three original pieces of furniture present, the table in the great hall, a round table and the ‘cabinet of boxes’ in the withdrawal room. There is also an exhibit of a Tudor bed (which you can test for comfort). 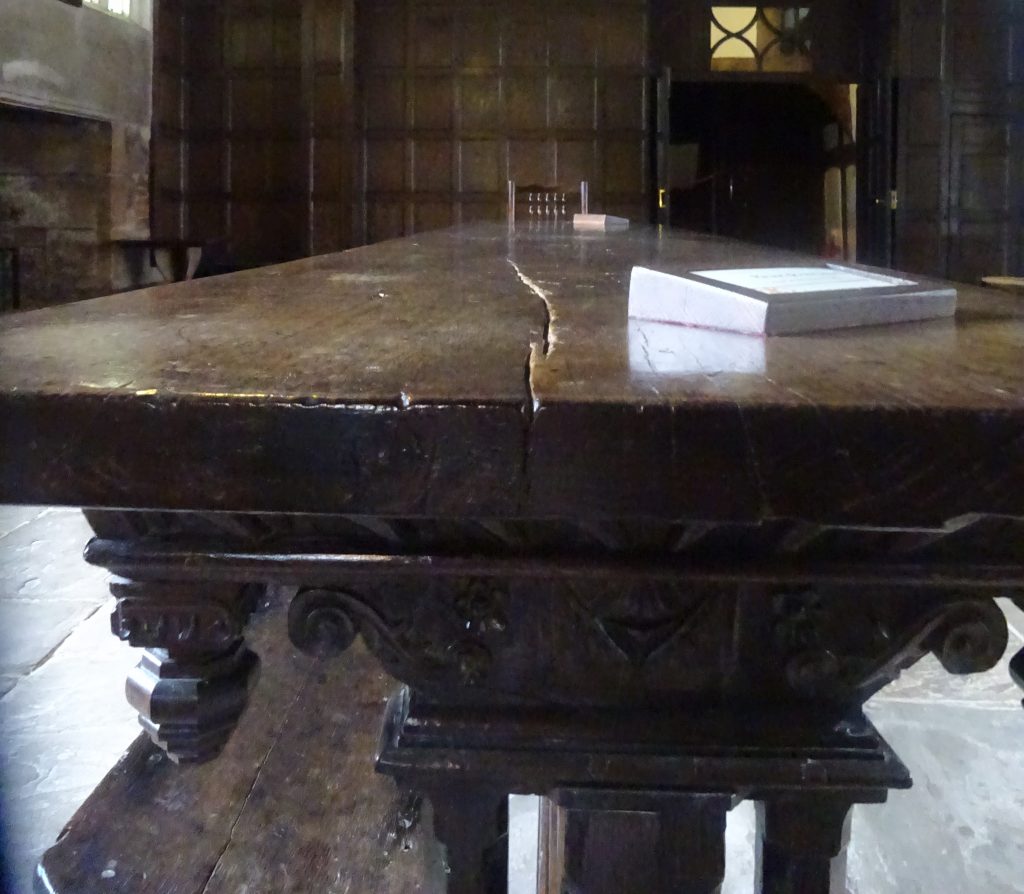 Table In The Great Hall

In the Little Parlour is some original painted panelling and some very early wallpaper! This was discovered behind the wooden panelling in 1976. The wallpaper tells the story of ‘Susanna and the Elders’, which is a biblical story. 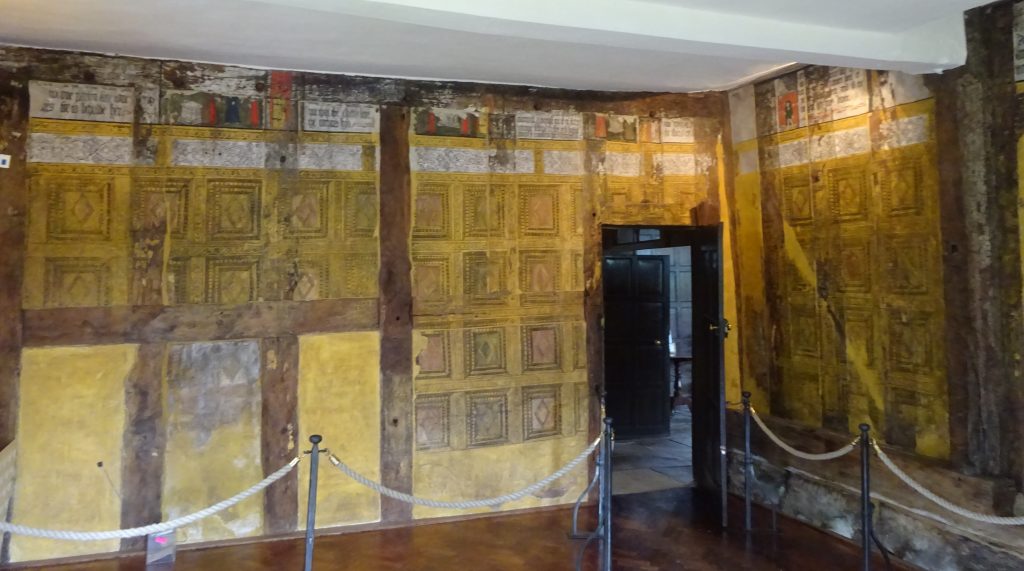 Original Painted Panels And Wall Paper in The Little Parlour

Throughout the building are a number of impressive fireplaces. There are also a couple of garderobes. There are also modern facilities for guests to use, the men’s is located where the brew house was and the ladies at the site of the bakery (the ladies have a bonus of an oven being in there, so an extra exhibition for the girls)! 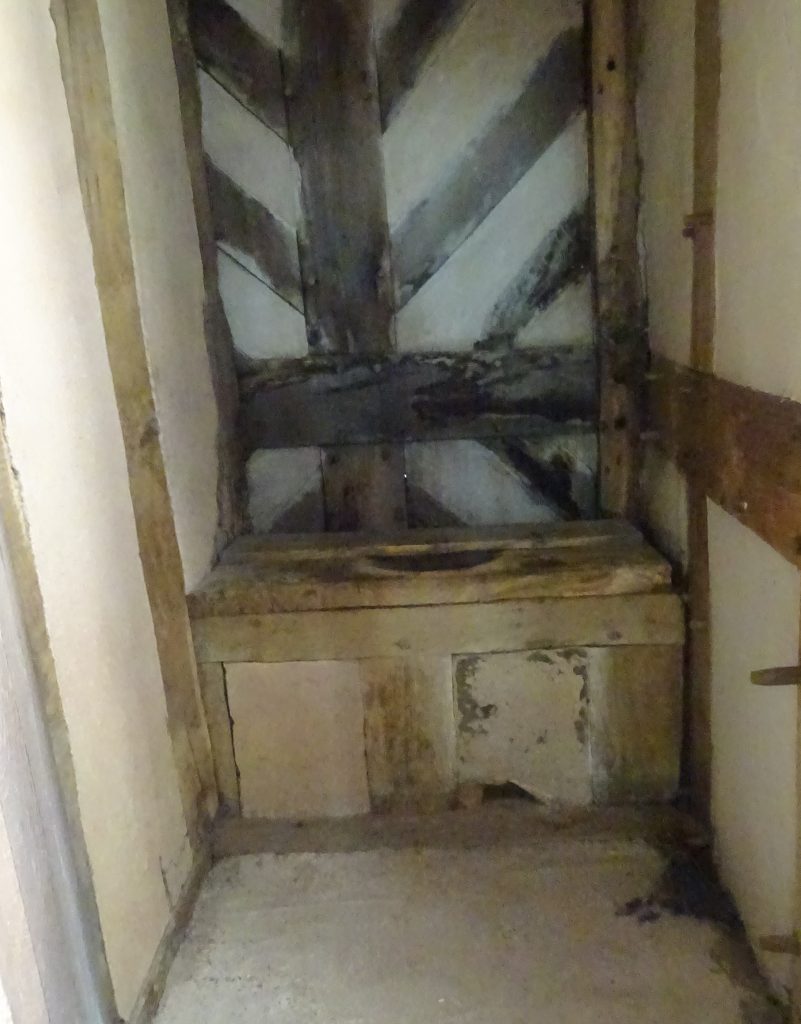 In the Chapel you will also find Elizabeth Moreton’s Bible which was donated. The Chapel is still a working chapel. The priests that do the services also get to ring the bell in the bell tower. 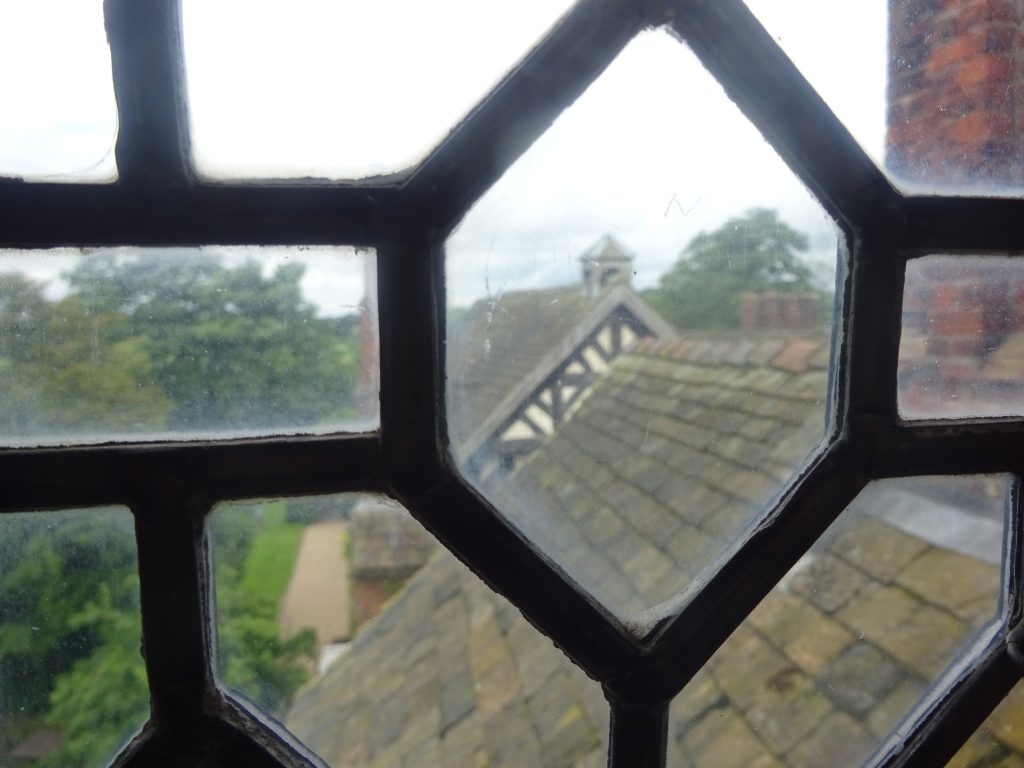 The Bell Tower From The Long Gallery

Throughout the estate are plenty of information signs. These signs tell you about the building, construction and Tudor life, as well as some interesting ‘did you know’ facts.

Outside you can wander through the gardens. There are herbs and vegetables grown here, that are labelled. There’s also an orchard and a knot garden. 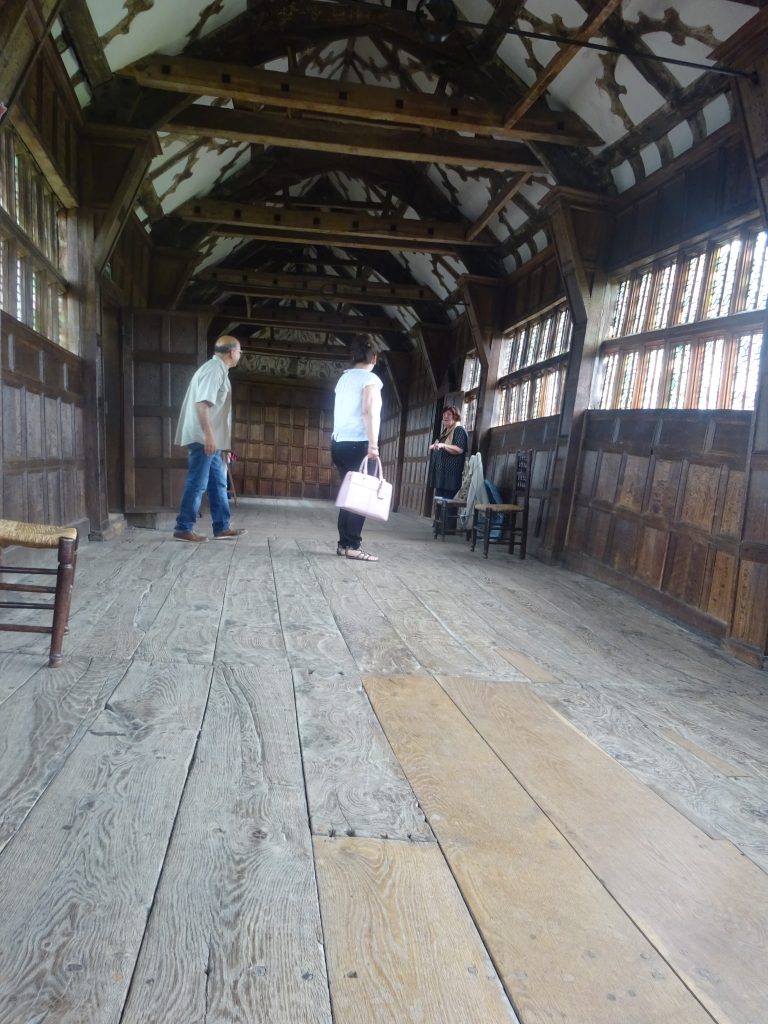 What You Can Do

You don’t just have to wander around the estate, reading the signs. There’s plenty to get involved with. You can:

Go On A Free Guided Tour – The tours are regular and take about 40 minutes. Learn about the Moreton’s and be taken around some of the more historic rooms of the ground floor. 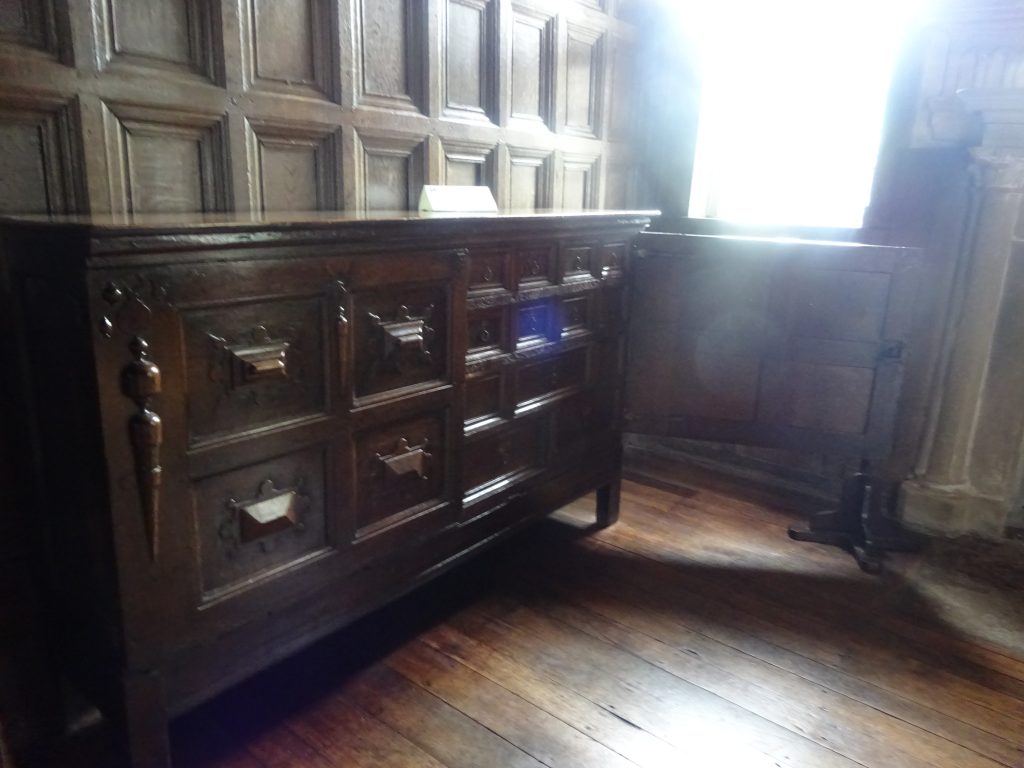 The Cabinet Of Boxes

Have A Go – There is normally at least one thing Tudor that you can try. From indoor and outdoor games to crafts, give it a go!

Dress Up – Try on some Tudor outfits!

Go To A Service – The chapel is still a working chapel. Why not go to a service here? 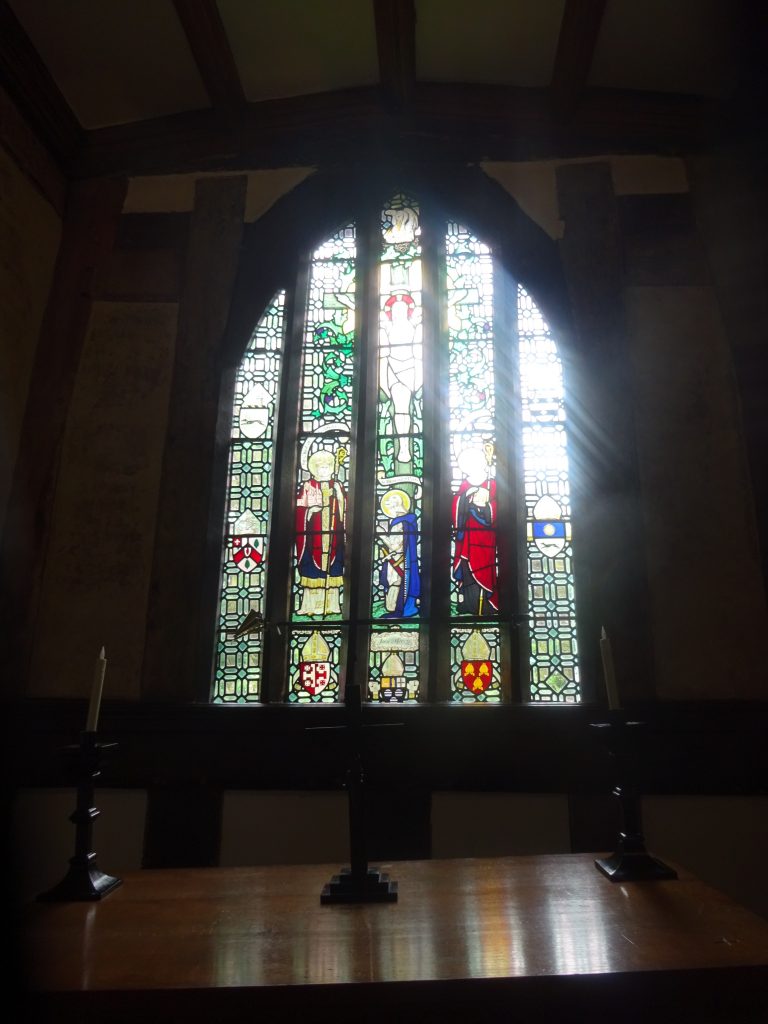 Join A Festival – At Little Moreton Hall festivals are still celebrated, the Tudor way! Join Lammas, Yuletide and more to see how the Tudors celebrated.

Refreshments At The Hall

If you need a break from all the history and exploring, there’s plenty of opportunities to refresh at Lower Moreton Hall. All the food here is locally sourced (the vegetables grown in the garden, you don’t get more local than that!) And the baked products are baked on the small onsite bakery.

Little Tea-Room – The Little Tea-room offers a variety of snacks. From platters to pastries and homemade sausage rolls and plenty in between! There’s also outdoor and indoor seating.

Ice Cream Kiosk – The Ice Cream Kiosk is weather dependent and only opens on days with a decent weather forecast. Here you can sample local Snugburys ice cream. 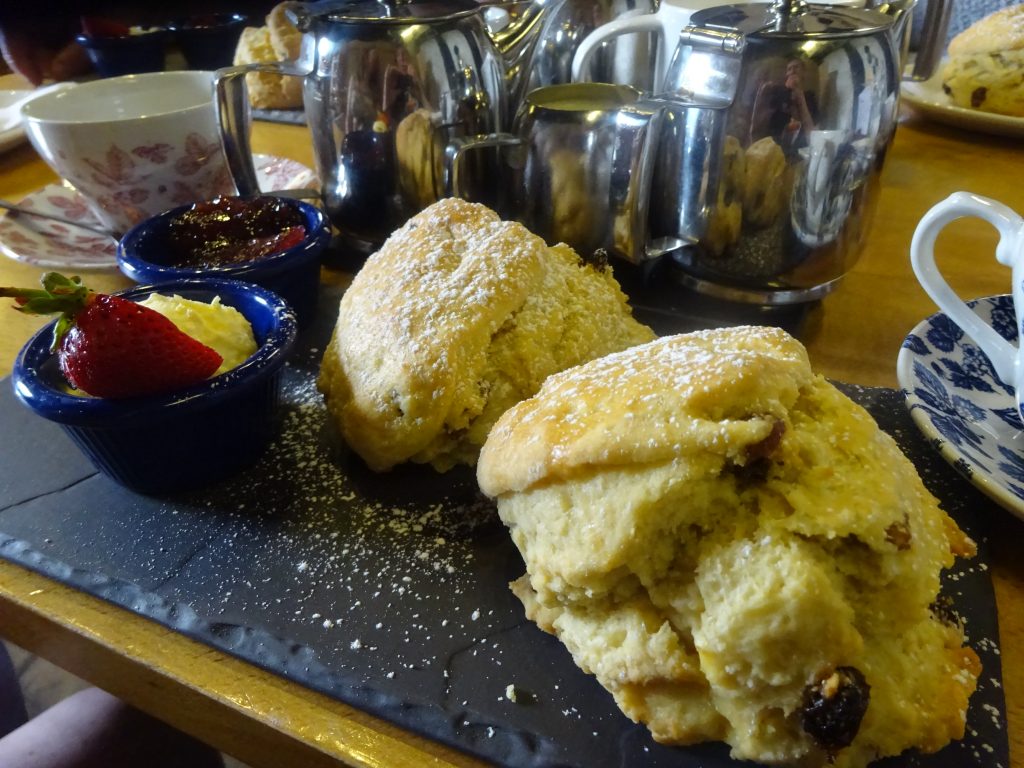 Picnic – On a good day, why not bring your own picnic? There are plenty of picturesque lawns to picnic on. You can even borrow a blanket if you forget your own! 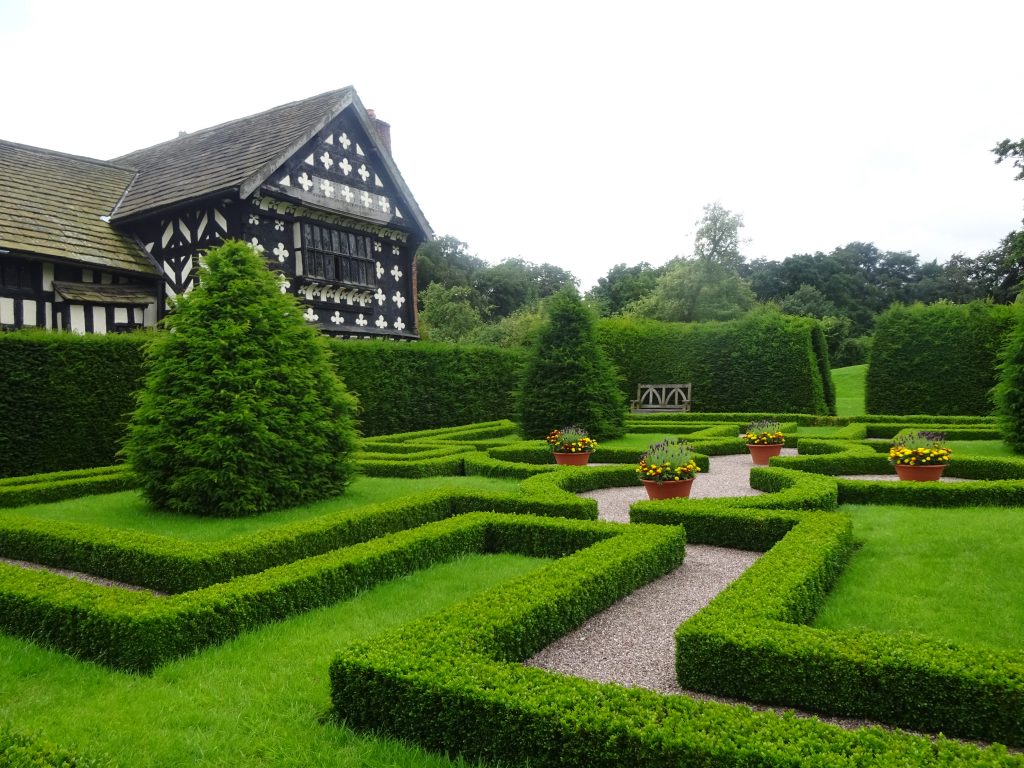 Little Moreton Hall is full of history and a great day out for anyone. Just seeing the wonky, quirky building fills you with awe as you wonder how it is still standing! With plenty of information, events and hands on areas you can get a great glimpse into Tudor life! 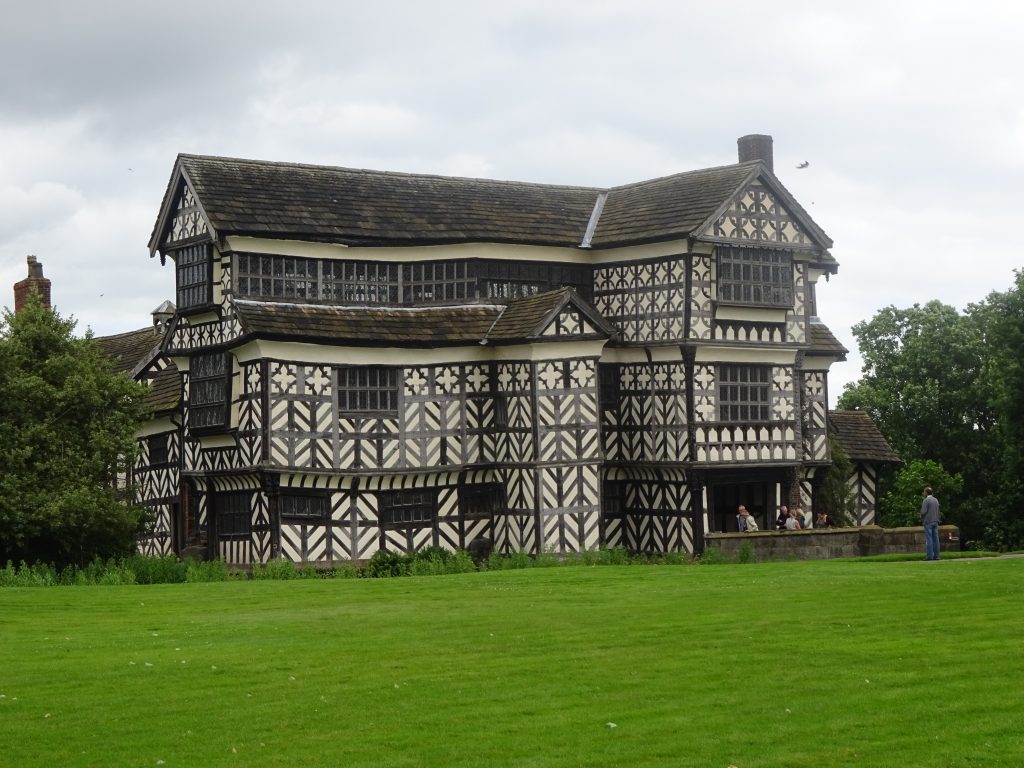 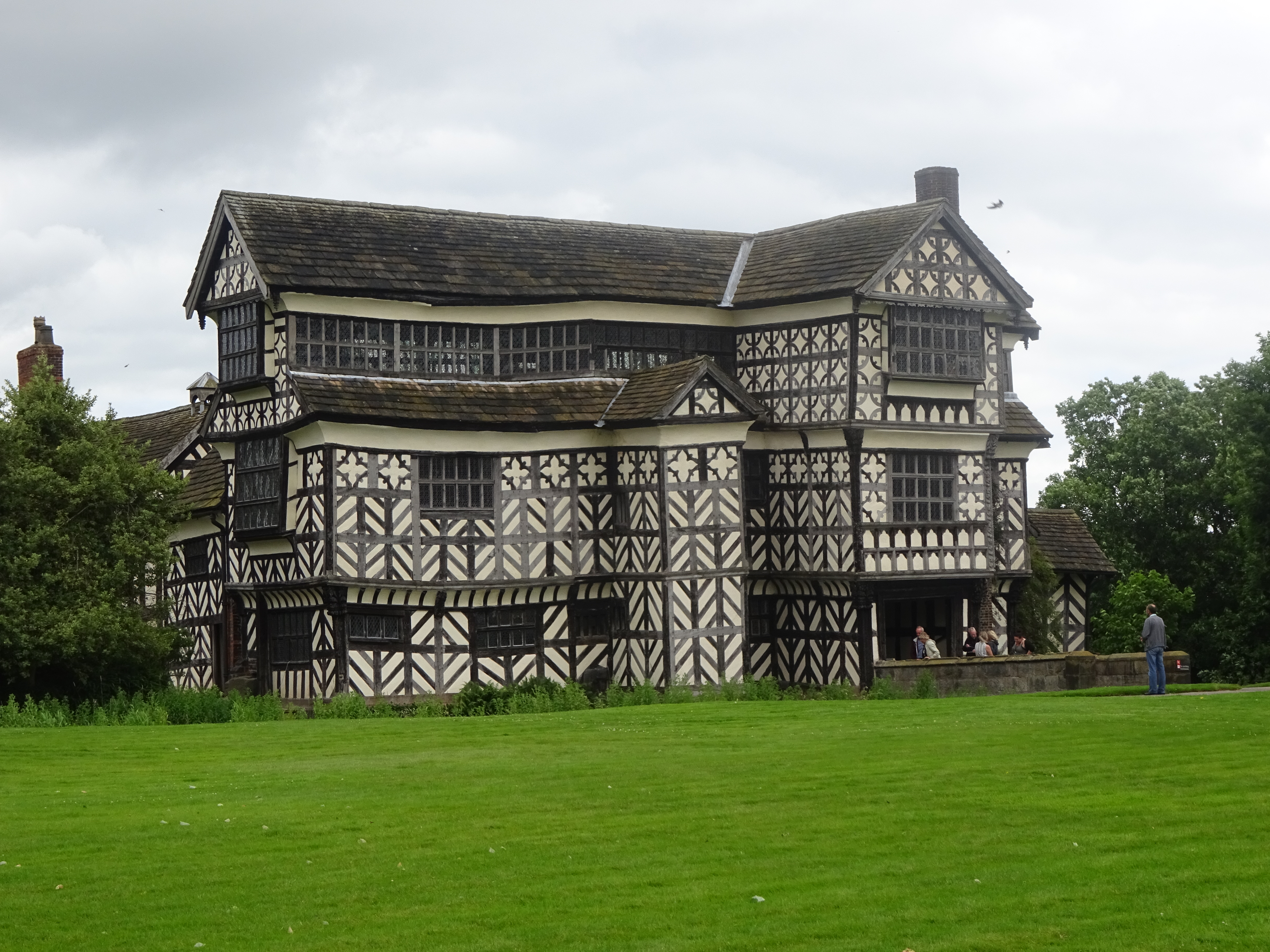