Some countries really aren’t as lucky as the UK. Let’s face it, I have access to clean and safe drinking water straight out of the tap. It’s wonderful. When I travelled to Mexico I had a couple of filtration systems, such as the LifeStraw Go, as I wanted to avoid buying plastic bottles all the time. Although the Lifestraw was great for filling up and taking on the move, it didn’t help when having to use water for cooking. I also needed more than just one bottle of water throughout the day. So all though it was good, it wasn’t quite perfect. After returning I discovered the LifeSaver Liberty bottle, so thought I’d give that a go.

Disclaimer: I was given a LifeSaver Liberty in exchange for an honest, unbiased review. All opinions that follow are my own.

LifeSaver was the invention of Michael Pritchard. After seeing the Tsunami of 2004 and Hurricane Katrina in 2005, he wanted to create a portable water filtration device. In 2007 he created the first LifeSaver Bottle.

It didn’t take long for the company to establish itself in the Humanitarian World and in 2010 they caught the attention of the British Army, who now use them as their portable filtration device for personnel in the field. Later, they worked in partnership with Oxfam and created the Cube, which provides a family of four safe drinking water for a year.

Now they have several bottles, the cube, jerrycans and more. All with the same filtration technology.

The handpump pushes the water through approximately 15 nanometres of a hollow fibre membrane pores of the ultrafiltration cartridge and out through the nozzle. This creates a physical barrier to contamination. It filters out 99.9% of bacteria, viruses and cysts. This meets the adaptation of NFS Protocol 231 based on the US Environmental Protection recommendations, as a minimum.

The bottles are made in the UK and contain no chemicals. No electricity is needed to filter, it’s just a handpump. Each filter also has LifeSaver’s unique and patented “failsafe” technology, so once it is no longer filtering the water, none will pass through the filter.

About The LifeSaver Liberty Bottle

The LifeSaver Liberty bottle has the same filtration technology as the original LifeSaver but is smaller and lighter. It can hold 400ml of water but is the world’s first and only (at time of writing) portable water filtration system that is a water bottle combined with an inline pump. 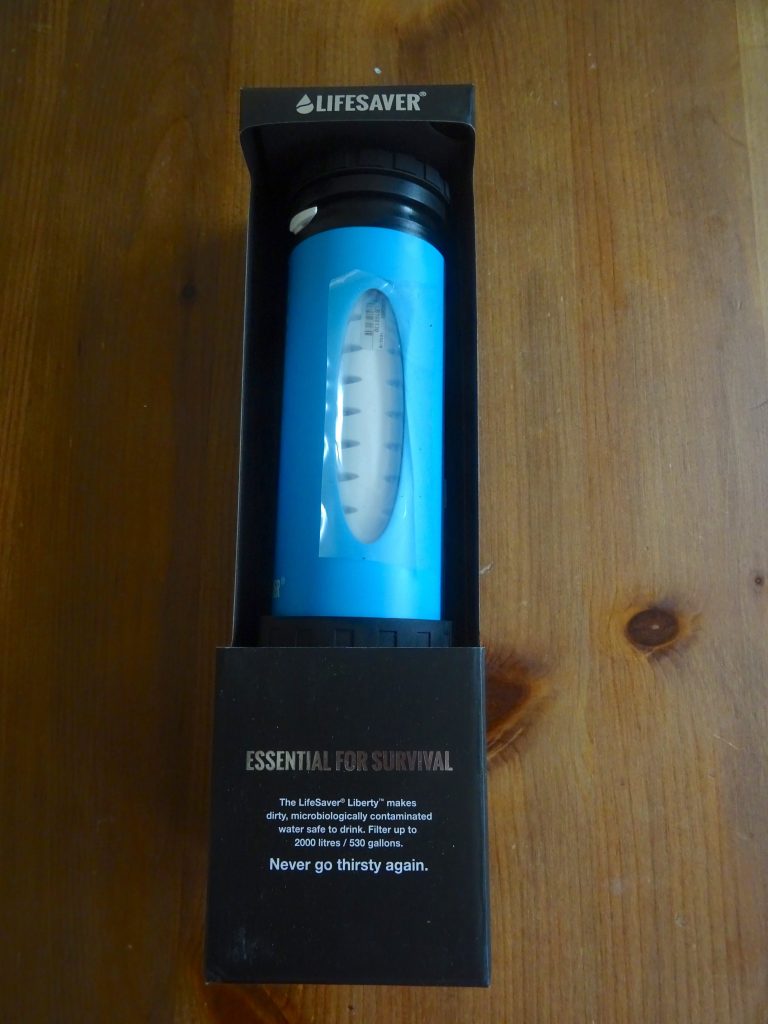 The filter can clean 2,000 litres of water and once it can filter no more it will simply stop letting water through. The cartridge can then be replaced.

The Liberty bottle can be used as a water bottle and a pump to fill other water bottles or storage. In fact, it screws on to wide mouth water bottles, such as the Hydro Flask. It also comes with a Scavenger Hose that allows you to filter large amounts of water at once. Without getting your hands wet you can use the hose to draw water from the source, through the LifeSaver Liberty and straight into another bottle. 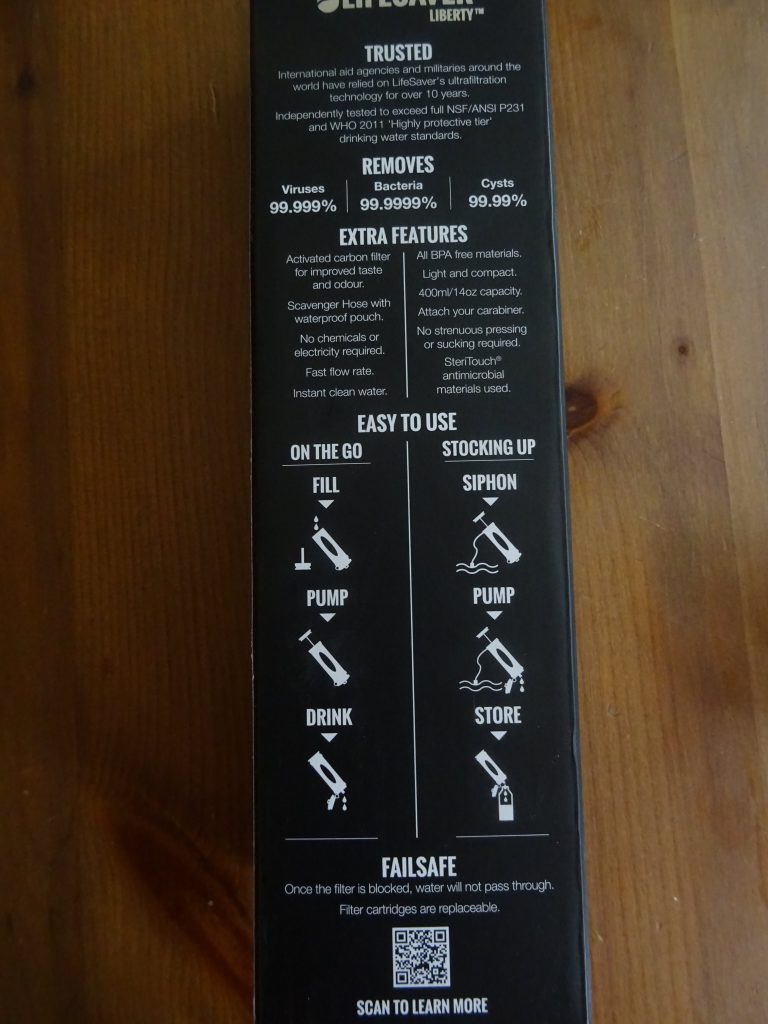 The Features Of LifeSaver Liberty

The Liberty bottle comes in several colours, I received the blue bottle (not that the colour affects anything, but I like it). The bottle has to be primed before using, which involves leaving it with some clean water for 5 mins and then pumping some water through.

In all honesty, I got myself a little confused with the instructions, but it was probably me over thinking it!

Although I haven’t had time to try the LifeSaver Liberty on my travels, but I really wanted to give it a go. Luckily, there is a little stream near my home, so I headed there to try it out. 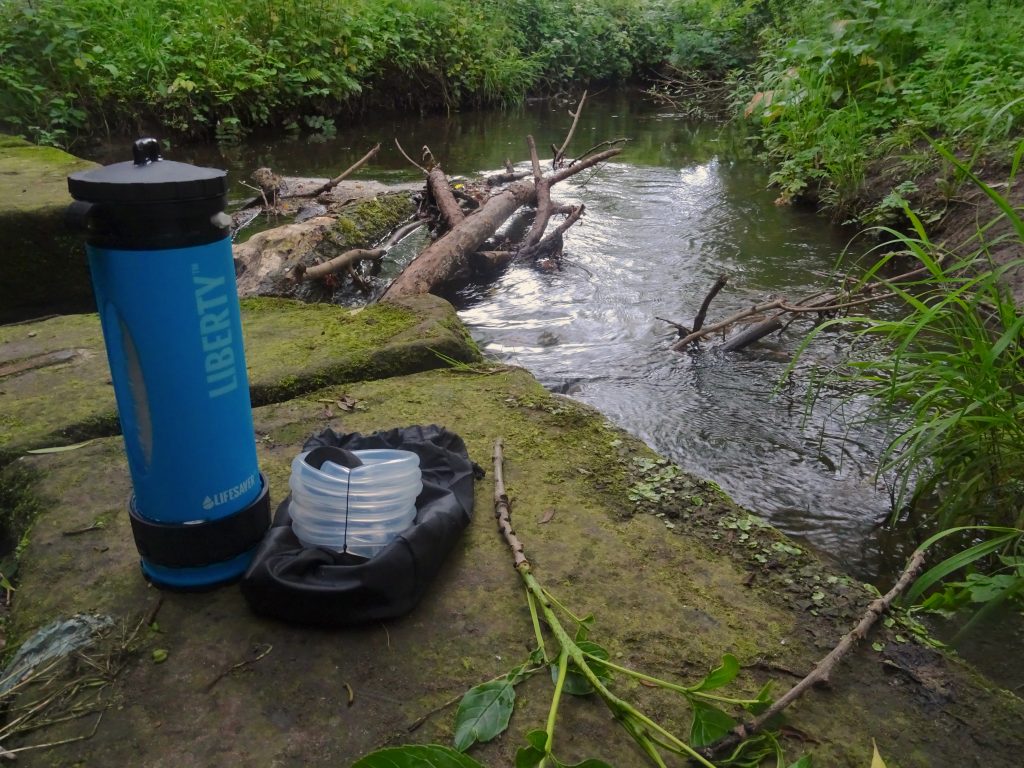 All Ready To Try The LifeSaver Liberty

The water in the stream is, well, it definitely doesn’t look drinkable. It is a bit brown, full of logs, twigs and who knows what else; the perfect place for trying the filter out.

Using the LifeSaver Liberty was much easy than I’d envisioned, I definitely overthought the instructions. Although I found it a little difficult to drink from, once pumped the water flows out and it was a little quick for me. However, filling my Hydro Flask straight from the stream with the Scavenger Hose was ridiculously easy. It only took a few minutes to fill the litre bottle. 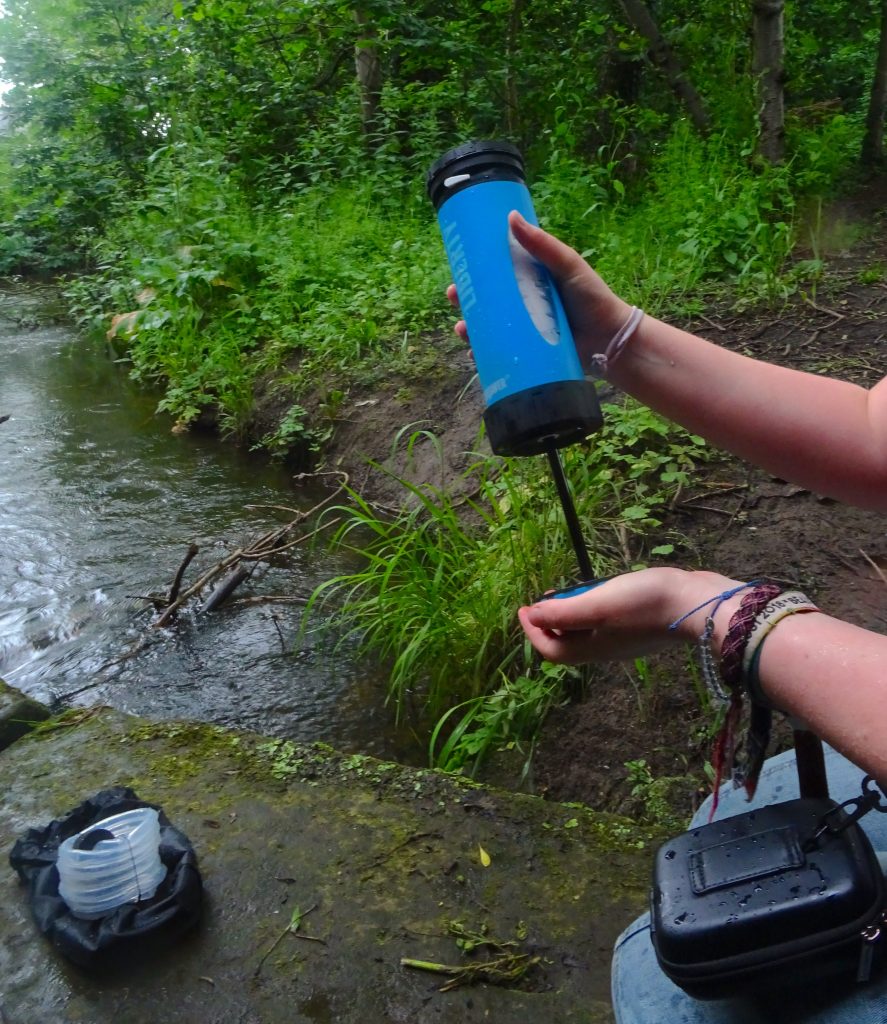 The Handpump Is Easy To Use

The water that came out was perfectly clear too. It tasted fine when drunk, in fact, it tasted better than my tap water at home! 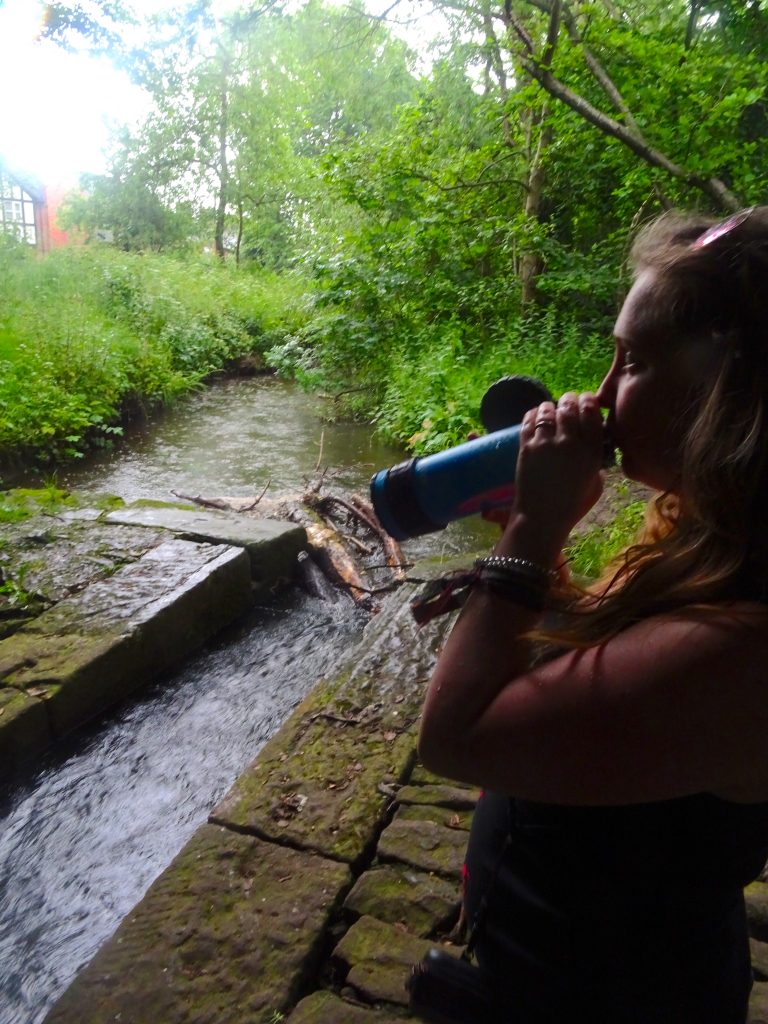 Trying To Drink From The LifeSaver Liberty 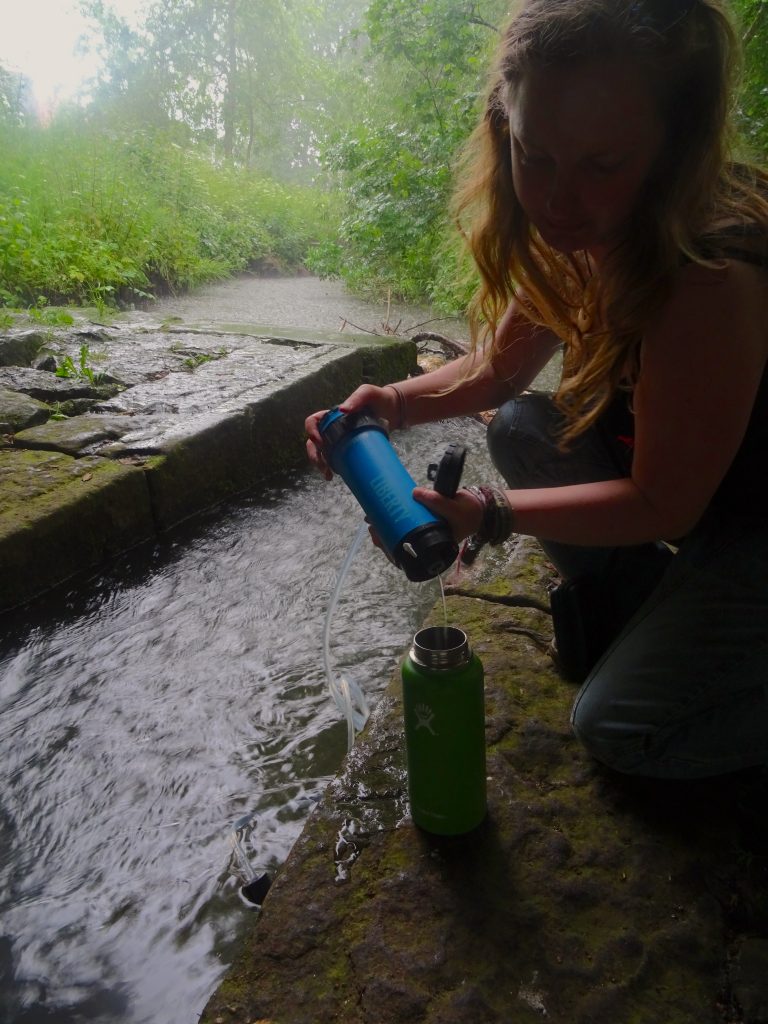 Filling The Hydro Flask From The Stream Using The Liberty – Can You See How Clear The Water Is?

When a product literally does what it says, how can I give it any less than 5/5? The water from the stream was definitely clean when after going through the LifeSaver Liberty bottle and safe to drink. It is easy to use and works great as a pump for filling other bottles.

My only two small criticisms are that I found it difficult to drink directly from, as the water flowed out too quick. Also, holding 400ml of water isn’t a lot. But since with the bottle you can drink from anywhere, do you really need it to hold more?

I did notice a great design feature too. There’s a little white switch below the lid, this is the water flow valve. It has to be turned so that it points up to allow the water to flow. I noticed that this cannot be accidentally left open; as the lid will not go on if it is open. 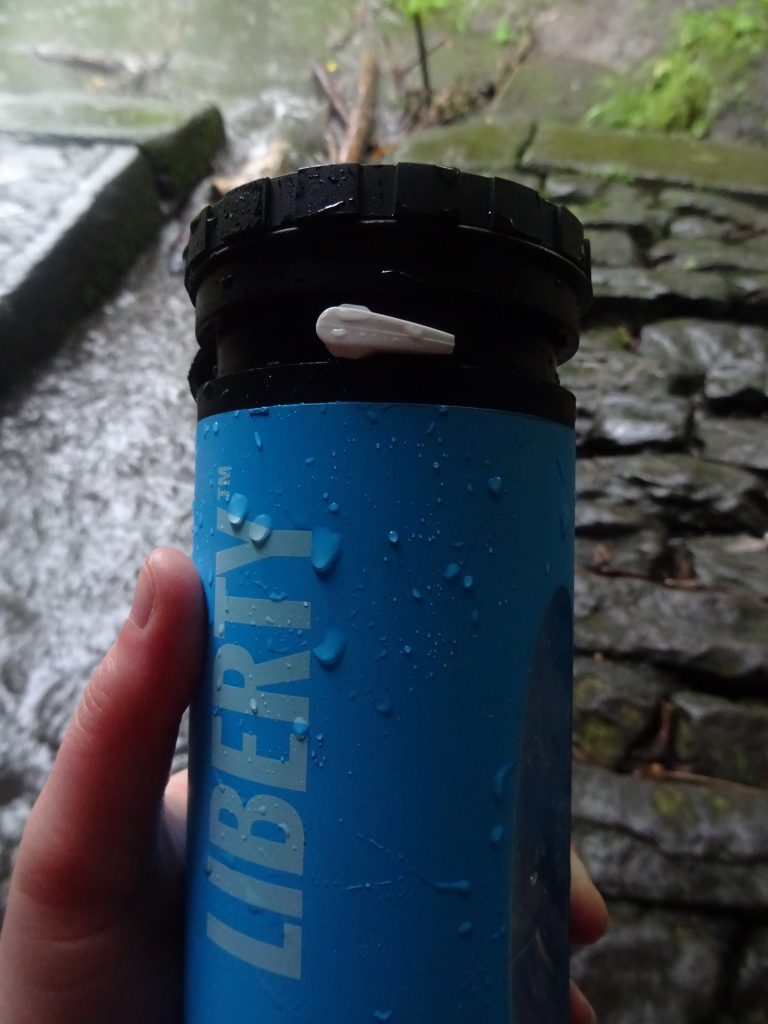 It wasn’t until I got back that I realised it could actually screw onto the Hydro Flask. But they are right, it fits perfectly. 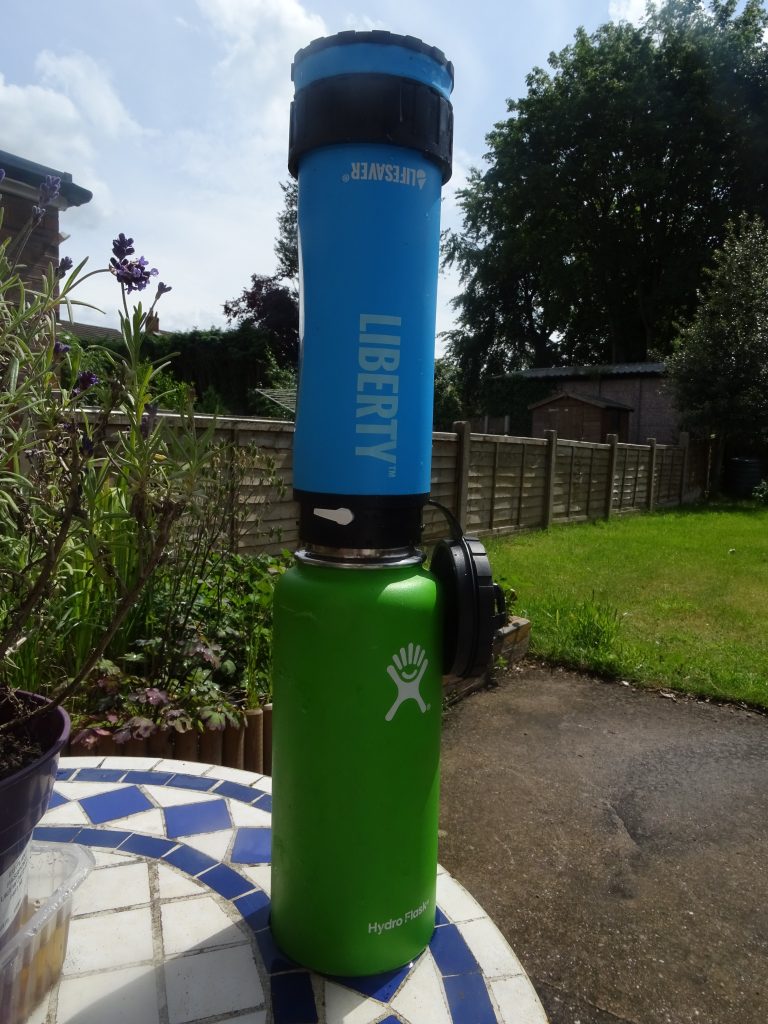 A Match Made In Heaven, Liberty And Hydro Flask

The LifeSaver Liberty bottle is great, really great considering the brown icky water came out clear, tasted fine and was completely drinkable (well, I’m not dead yet after using it!) I can’t wait to take it on my next hike, as it’ll mean I’ll only have to take the LifeSaver Liberty bottle and my Hydroflask for all day, for both me and Dave, instead of us having two water bottles each. 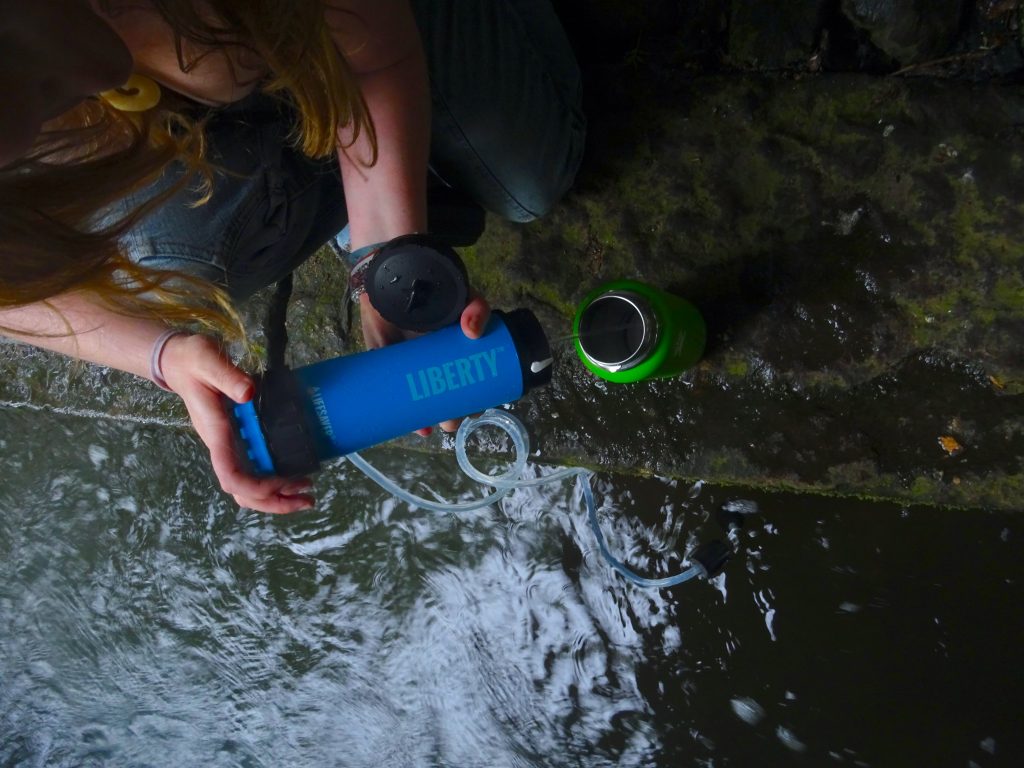 Seriously Super Easy To Use The Liberty 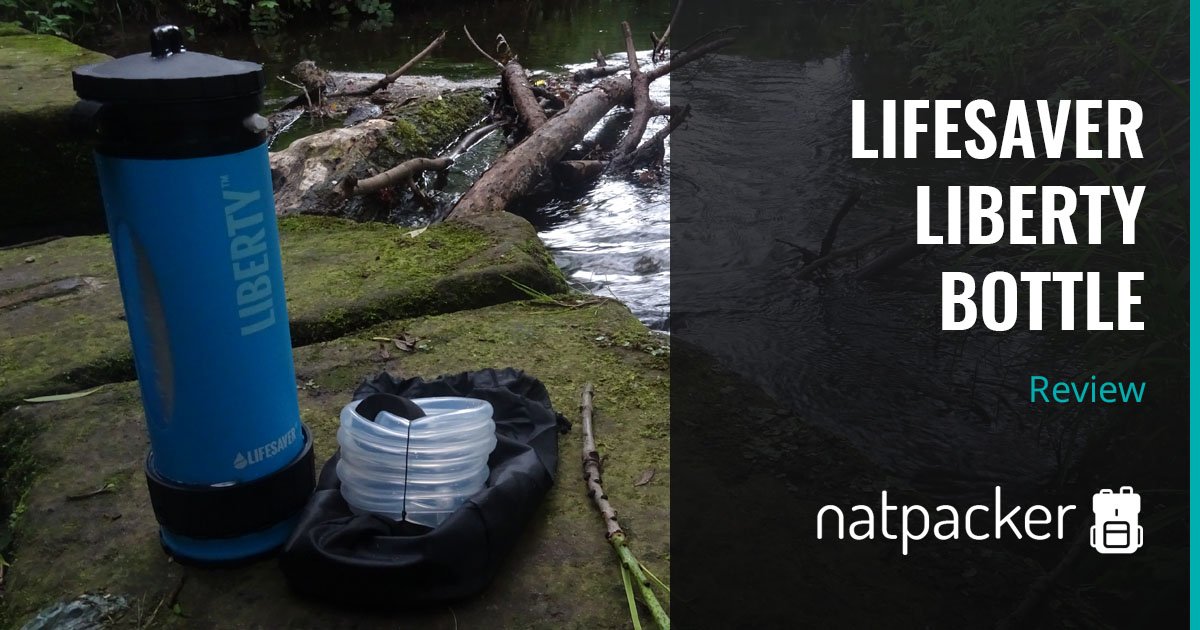