My Kilimanjaro Adventure Day 5 begins at the Barranco Camp (3,900m). The trek only takes the morning, giving us time to rest after conquering the Barranco Wall. We finish at the Karanga Valley camp (4,200m). The trek is 4.3 miles (7km) and according to the itinerary should take about 4 hours. As the ascent isn’t very much it is another acclimatisation day.

Missed the previous day’s adventures? Use the links below to go back:

This morning began with a bad awakening. Me and Dave had taken Diamox the evening before as we felt that the altitude was starting to have a small effect. Turns out that that was a mistake.

I woke with the worst ‘pins and needles’ in my legs.I couldn’t move my legs without sharp pains. Not good when the day is going to consist of walking! It was seriously the worst thing I can remember going through! It spread to my arms as well. There was nothing I could do to stop it, or even relieve it slightly. Luckily it had mostly subsided after about half an hour, so I could at least move and walk. But I decided no matter how bad the altitude affected me I would not take any more Diamox. It just wasn’t worth it.

Me and Dave headed out to the communal tent. The breakfast was once again the rough porridge, sausages, eggs and toast. I was beginning to find the porridge difficult to stomach, no matter how much honey I put on it!

Faraja came in to tell us of the day’s trek. He told us that it should only take the morning, so we would have lunch when we arrived arrived at camp. The Barranco Wall is a fairly difficult and narrow climb, so it is important to let the porters pass quickly.

So we headed out to sort our stuff out. As we were getting our gear together and sorting what we would take on the walk and what was left for the porters I could not find my camera. Worst thing ever! The worst part is that I knew it must be in the tent, somewhere, but i just couldn’t find it at all. I unpacked everything and repacked. There was no sign of it.

It was pretty much time to go and I didn’t want to hold the group up. So I gave up searching telling myself that it must be somewhere in the tent or one of my bags. I’d find it when we get to camp. It’d just be a shame that I’ll have no pictures of Barranco Wall…

We all shouldered our packs and headed off across camp to the Barranco Wall. We had been warned and heard some stories, we knew it was going to be a tough morning!

There were quite a few groups getting to the wall at the same time, so there was already a bit of a queue! The climb was tough. There were places where you had to scramble up, very narrow paths along edges of the cliff. At times I was hugging the wall! There were some small jumps too! At one point Gemma’s leg got completely stuck! But we managed to get her out!

As we were having so much trouble, clinging on, using our hands, throwing bags ahead at times, the porters breezed past us. The porters really are amazing, I don’t know how they climbed the wall so fast and with such ease!

After what felt like hours of scrambling, climbing and pulling ourselves up, our group finally reached the top of the wall! At the top were a group of Germans with a guitar and ukulele, they were celebrating their success by playing music! One of our group had spoken to them last night and it turns out that they had done some proper training for Kilimanjaro – doing cardio exercise with less oxygen. Now we were all worried as none of us had done anything like that!

As the Germans finished their singing and headed off to the next part of the day’s walk, we all decided to have a sing-song. So we did a ‘brilliant’ rendition of Bohemian Rhapsody… We possibly killed it… Nevermind!

The next part of the walk was descending into a valley. Seriously, we’ve just climbed all the way up here to go back down? But down we had to go. And then back up! Yes, the other side of the valley we had to climb back up! We were all still feeling good though after Barranco Wall, so me and Dave kept singing, some of the others joined in when they knew the song, but we have strange taste in music!

Another group passed us at some point, and told us they were enjoying our singing. I think we were giving them some amusing entertainment rather than being amazing singers!

We got to Karanga Valley camp and were blown away by the views. Our porters quickly brought us water to wash with then we gathered in the communal tent for a hot lunch. Lunch this time was pasta, made a nice change! 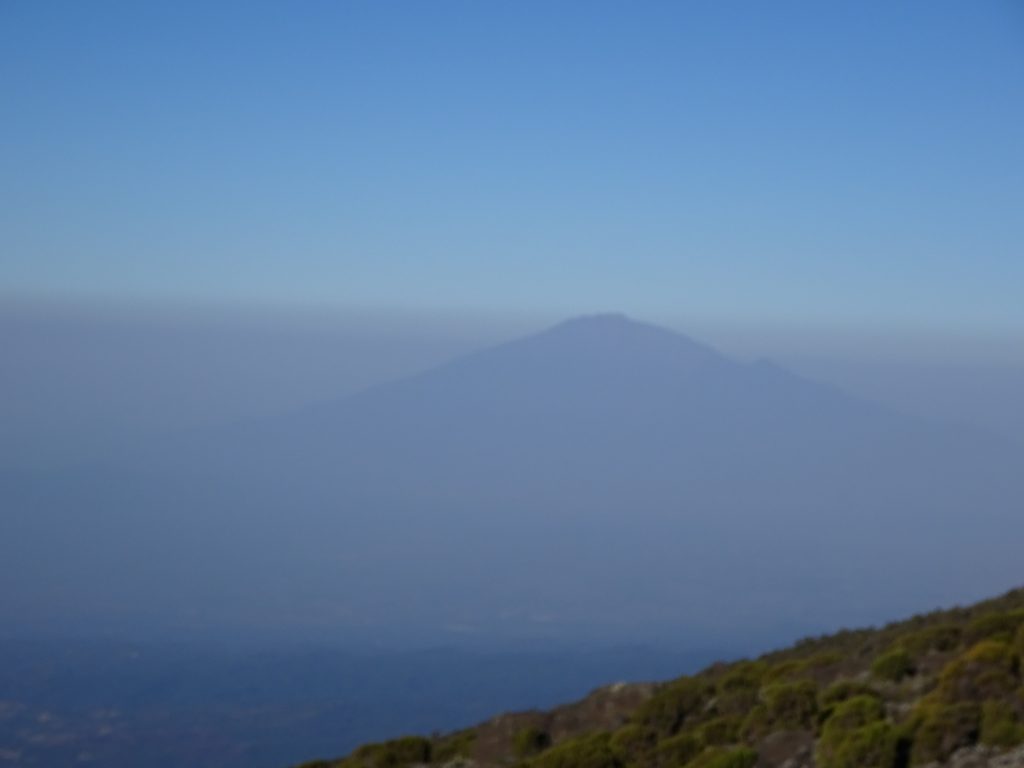 Looking Over Karanga Valley In Mist

Faraja then came in to talk to us. He asked what we wanted to do for the afternoon. We could either have a rest or if we wanted we could go for a little walk. Me, Dave and Gemma were well up for a little walk, so we arranged to meet in half an hour, as I wanted to see if I could find my camera. Faraja seemed really worried that I hadn’t had my camera all day, and a little upset that I hadn’t told him. But I knew it must be somewhere. He also told us that ‘Karanga’ is Swahili for ‘Peanut’. But I can not remember why it is called the ‘peanut valley’… Peanuts growing there seems too obvious!

So we went to get sorted for a short walk. I didn’t want to take everything that I’d had with me during the days hike, so I opened to top compartment of my bag… And there was my bloody camera! I’d had it with me all along! So good, but annoying!

A little side note here, this was the BEST (yet worst) toilet in all the hike. The worst as there was no door, but luckily it faced away from the camp. The best as the view from the toilet was amazing. A ‘loo with a view’! 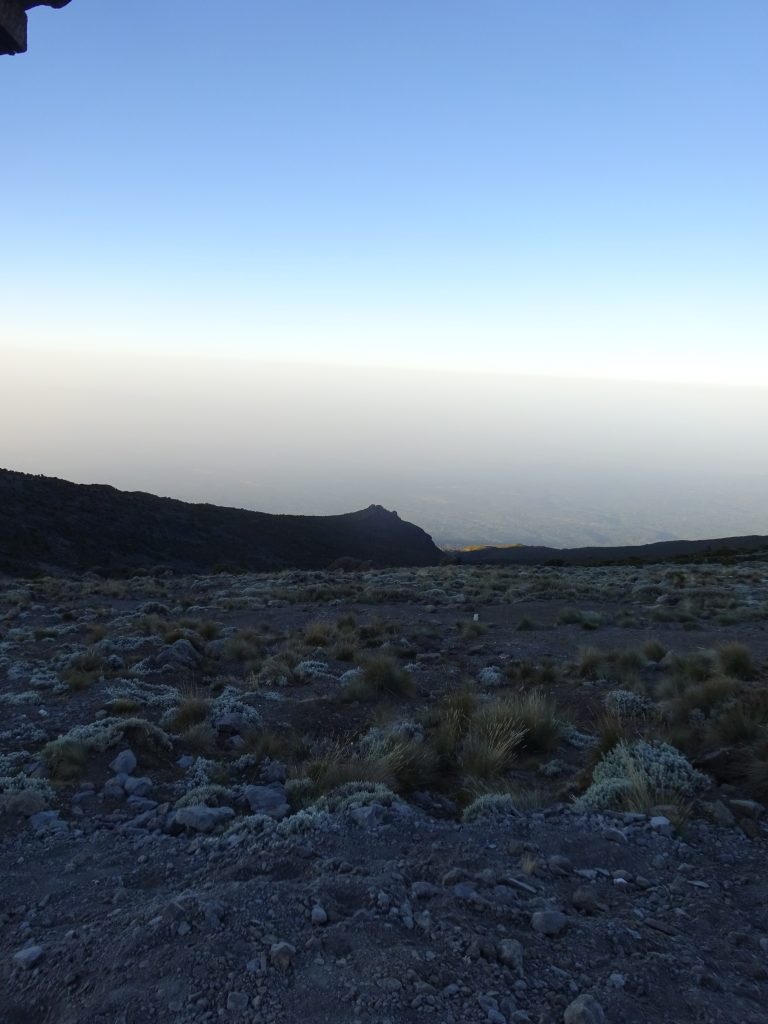 The View From The Loo

So me, Dave and Gemma met up with Faraja and Inno to have an afternoon walk. It was basically a preview of what the next day would be, as it was the path! There were quite a few groups going past, some companies don’t stop at Karangu, so those groups would be summiting that night. I felt good that we break the last two days up, meaning we could all rest up before summiting. Although, at this point I felt full of energy and capable of reaching the next camp! 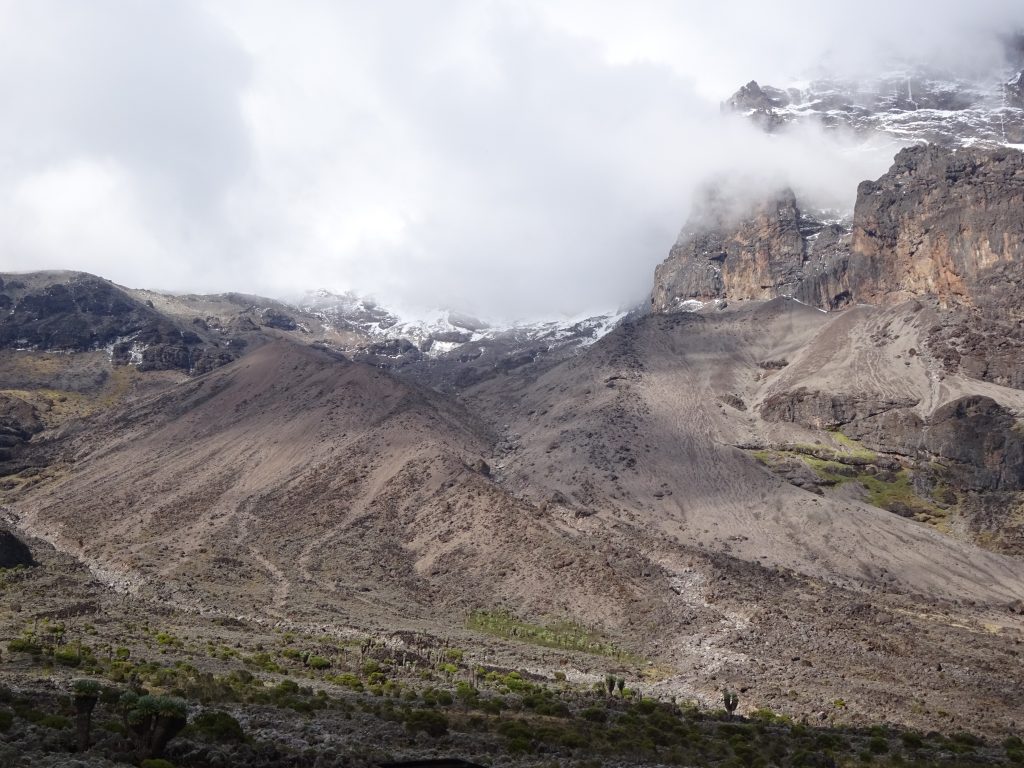 The View Of Tomorrows Path

We didn’t walk too far, but got to the top of the hill ahead. Then we enjoyed the views before turning back. Me and Dave wanted to go further, but the guides wanted us to get some rest today!

When we got back to camp we still had a couple of hours free before dinner. So we each went to our tents for a rest. Me and Dave were quite glad to have a bit of time together, as privacy was something we didn’t expect to get on this trip! Although as we got back to our tent there was a type of pigeon waiting for us! And he hung around for a while!

Some Kind Of Pigeon Outside Our Tent

A couple of hours later the porters called us for dinner. Once again it was the amazing cucumber soup (still love it, I’ve not been able to find the recipe which makes me sad, I can find cucumber soup recipes but they’re not the same…) Then we had a special treat! For dinner was chicken and chips! CHIPS! Made a really nice change from rice! In fact, we all got a little over excited about chips, we didn’t expect to have chips at all. Doesn’t seem like a camping food!

After dinner we didn’t stay chatting for too long. The climb and altitude was beginning to take its toll a little in at least some ways. Some were feeling it more than others. But it seemed like a good idea to get an early night, as the next night we would be submitting! 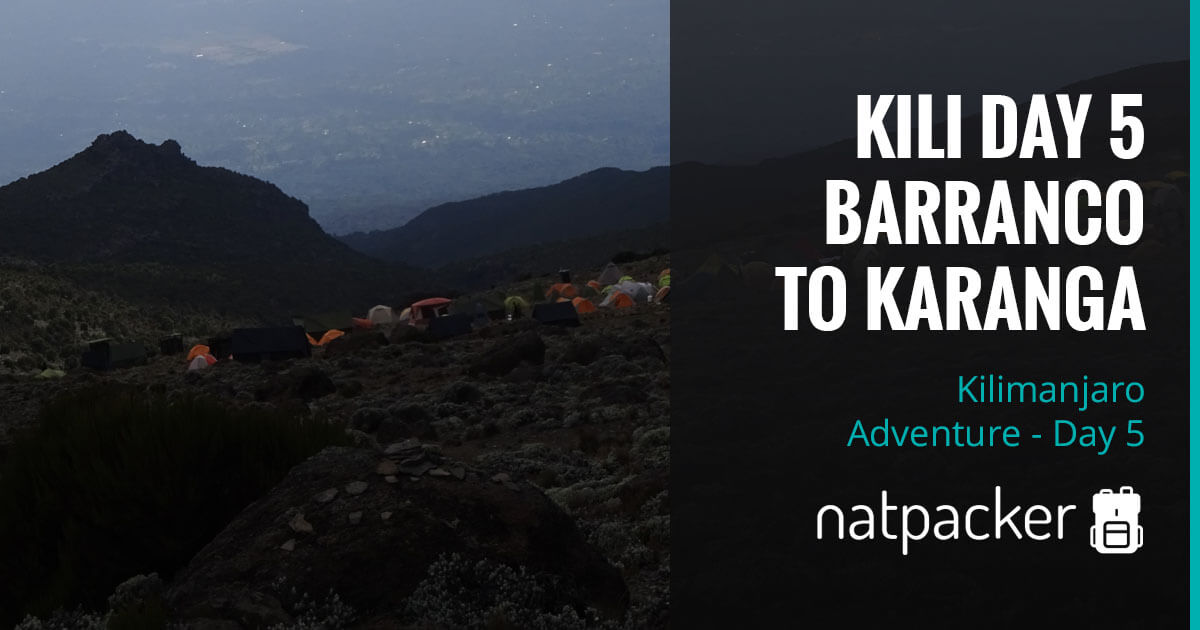