The second day of my Kilimanjaro Adventure was the start of the trek. Finally getting to begin climbing the mountain! The walk on this day was about 9 miles (15 km) to the Machame huts where we would camp that evening. The itinerary stated that this would take around 6 – 8 hours.

Missed Day 1? Go back to the Arrival
Or how about the prequel? Preparations and Planning

Me and Dave got up and dressed and headed down for breakfast, with all our gear. The hotel staff told us to leave our gear in the lobby and then took us to the safe, where we could leave valuables. Then we met the other three for breakfast.

The main thing I remember about breakfast is eggs. There were eggs. However we wanted them. Eggs, eggs and eggs. Weird what you remember…

As we were finishing Faraja arrived with the other guides – there were three in total, with Faraja being the head guide. Faraja introduced us to the other two – Tim and Inno (short for Innocent – I had serious doubts as to just how ‘innocent’ he was). He then checked what gear everyone needed, gave us our sleeping bags and then it was onto the bus!

The bus was a bit big for the amount of us that were on it! It took about an hour to get to the Machame Gate, where the trek would begin. We passed banana plantations, went through villages (all the school children waved), took a pit stop at a shop to get some snacks and finally arrived. 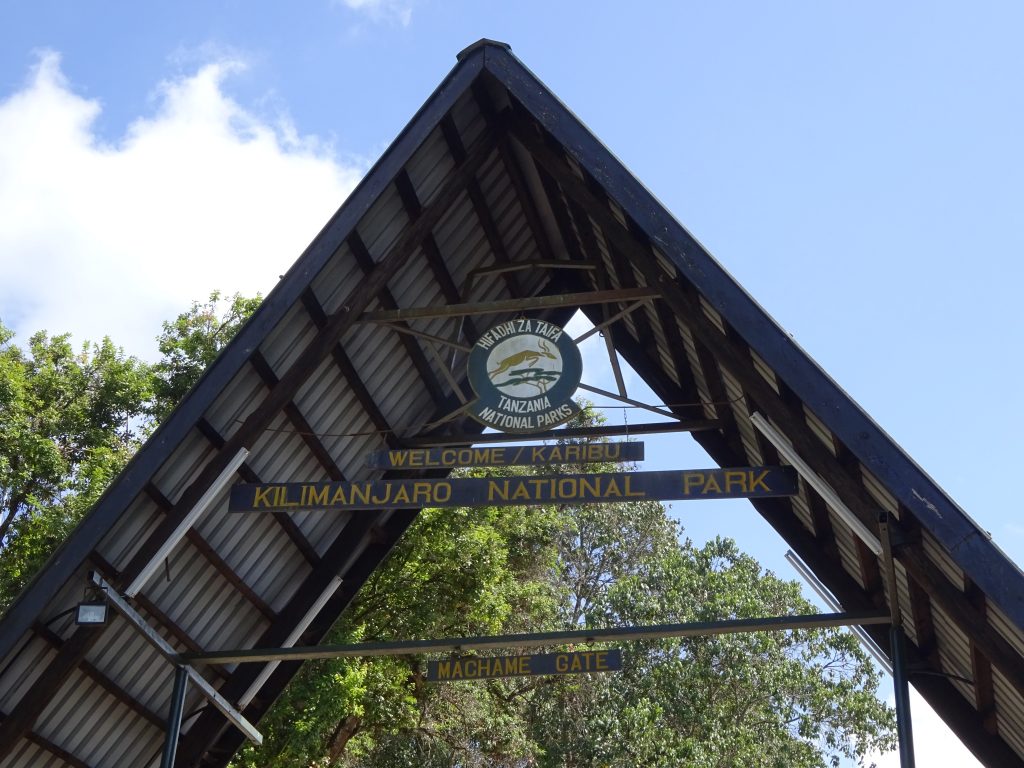 Just outside the Machame Gate there were loads of stalls selling flags and other tat. We didn’t even go for a look, as what would be the point buying something that you don’t need to lug to the top of the world’s tallest freestanding mountain? I wonder how much they do sell…

We had to sign the National Park agreement and show proof of identity. There was quite a bit of hanging around at this point. But we were able to fill our extra water bottles and there was some information on the national park. There was also a sign telling you how far each camp (and the summit) is from the start point. 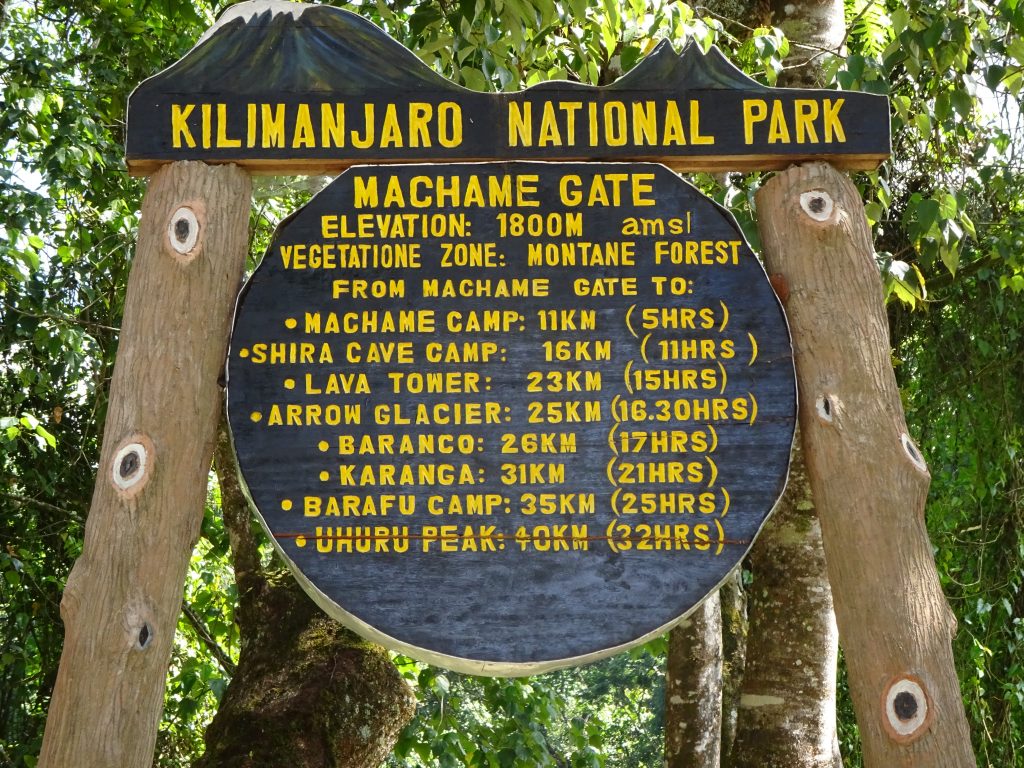 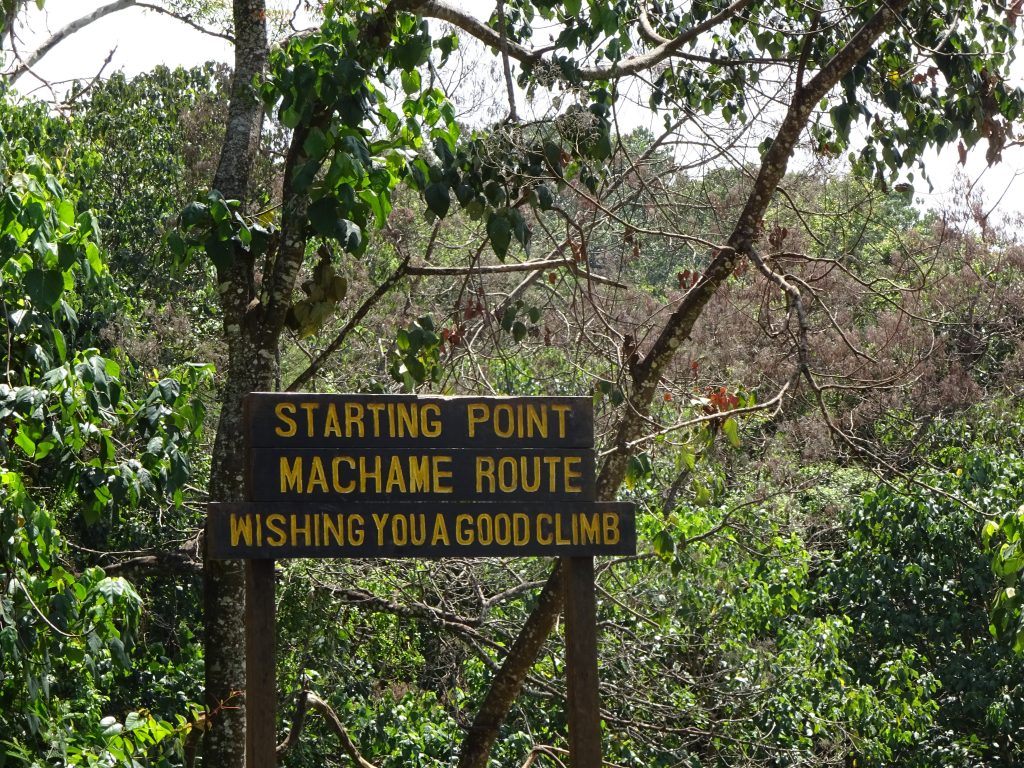 As we began our walk we were told to make sure we allow any porters past, as they are generally much quicker. Our porters headed off ahead of us, but other groups followed. Our guides set a slow pace – in fact it felt too slow. But this is to ensure you don’t tire yourself out on the first day. We heard a lot of ‘Pole pole’ which means ‘Slowly slow’. We had been warned the night before that we’d hear a lot of this phrase!

I was looking forward to this part of the walk. The itinerary had said that there is a chance of seeing monkeys in the rainforest. I was hoping to see some. But alas, there were none. We did however find a chameleon on the path. One of the guides coaxed it onto a stick so we could all get a good look at it before moving it off the path. 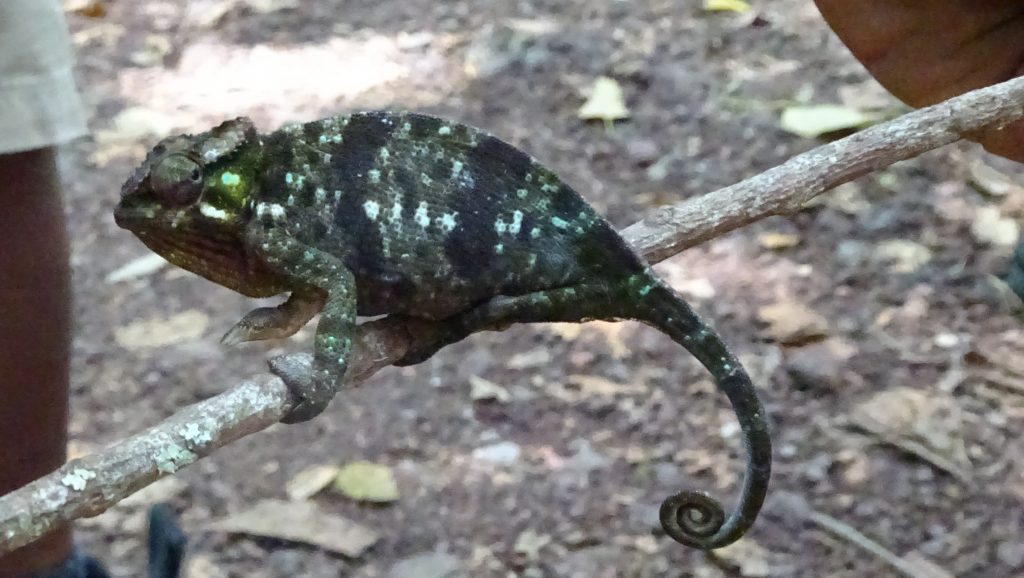 The Chameleon That Was On The Path

All three guides were great. They were chatty and pointed anything and everything out. One thing I really liked was a flower. It’s called ‘Pink Passion’ and from the side it looks like an elephant. Pink Passion Flower – Can You See The Elephant?

As we were slowly walking we were overtaken by porters, practically running, singing as they passed. Keep in mind these guys were quicker and were carrying much more weight! Crazy! Faraja told us that they have to be able to reach the summit within a time limit (it was something crazy like three days) to become a porter. And you have to be a porter for so long before you can become a guide. It’s hard work, very hard work. 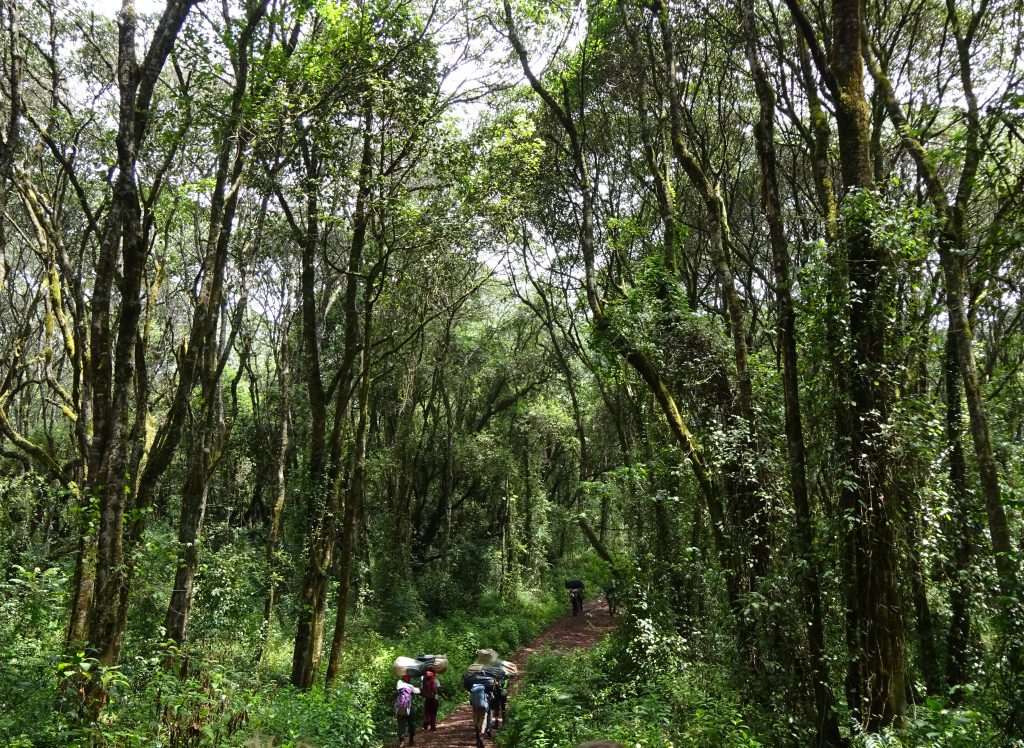 After a few hours we passed another group who had stopped for lunch. They had a table and were having food cooked for them! They must have paid quite a bit more! I’m glad we weren’t doing that, I found it weird enough having porters full stop. I feel so awkward with people serving me, carrying my gear etc.

Not long after we passed a ‘toilet’. Faraja told us that this is the only toilet on the path (except for those at camps). Gemma decide to go, but came back saying she’d decided against it as there was literally just one floorboard over the hole! I think I would’ve passed that up to… Be easier to find a bush!

It had been a few hours of walking by now, so Faraja asked if we wanted to stop for lunch. We all agreed. So we found a clearing and sat down to our packed lunches. OMG. The amount of food! Bread, tomatoes, fruit, crisps, some kind of snack bar and a hard boiled egg! I only ate about half of what there was. Deciding to save some for later (plus I couldn’t physically eat that much)!

As we headed out again. The path noticeably started heading up. The clouds gathered but Faraja, Tim and Inno told us it wouldn’t rain. Minutes later we got caught in a shower! These showers were on and off for the rest of the day. Literally, two minutes of rain and by time you got your waterproof on it was brilliant sunshine again! So the choices were to either keep the waterproof on and get too warm or keep it off and get wet! I opted for getting a little wet!

We climbed some steps, rounded a corner and arrived at the Machame huts! We had ascended to 3,000m (9,800ft) above sea level. The huts are no longer used as they fell into disrepair. Our camp had already been set up. Before settling in we had to go to the hut and sign in, there was a bit of a queue, ut it didn’t take too long. 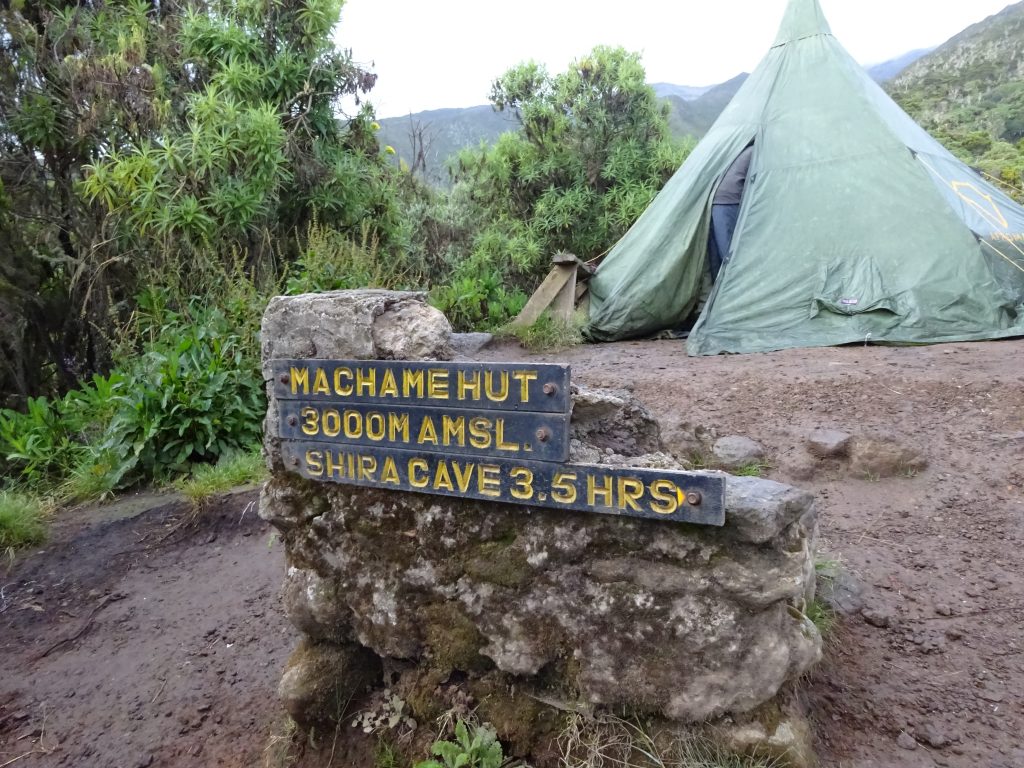 Then it was a case of getting settled into our tents, so me and Dave choose which we would sleep in.A porter brought our bags (one porter each) these porters would be looking after our gear all the way. I unfortunately can’t remember the name of my porter, he was young, full of energy, cheery and chatty. He was generally lovely. Dave’s was the opposite to mine! He was older, quiet and came across as a little surly. It was like day and night comparing these two!

Once our bags were in our tent, we unrolled our sleeping mats and got our sleeping bags ready, so we wouldn’t have to do it in the dark later! The porters brought us some water to wash with, which I was very grateful for!

After washing we headed out to have a little wander. The camp was quite small, there wasn’t much wandering to be done! But the view was brilliant. We also set out to find the toilets. They weren’t joking when they said toilets would be ‘basic’. A hole in the floor, I was just grateful for walls, a ceiling and a door! As a girl, holes in the floor really aren’t easy to use! It took a few days before I perfected the skill!

We had been told that when we were ready we could go into the communal tent for a brew. So after our small wander around me and Dave headed there. Inside the others were waiting with hot water, brew making essentials and popcorn! I’ve never enjoyed popcorn so much before!

Once we were all gathered Faraja, Tim and Inno came in. They checked how we were all doing, how are tents were and if there was anything we needed.Then they told us what the next day would entail. Dinner then interrupted our chat, so the three guides left. We asked if they were eating with us, but no, the communal tent is literally for our comfort. I found this a little weird, but it’s just the way of it I guess.

We had two waiters, who were very attentive. First we had soup, we asked what it was and it was cucumber soup. I loved this soup, good job too as this was on the menu a lot. Then we had a meat stew and rice. There was so much food. We all struggled, but the waiters were adamant that we all have seconds, no matter how small. I think they were determined that we had enough food to keep our strength up!

After eating Faraja came back in. He checked if we had any questions about the next day. We all stayed and chatted to him for a bit, but we were all tired so headed to bed early. I’m glad we did as we soon found out that this communal meal tent is where all the porters sleep! 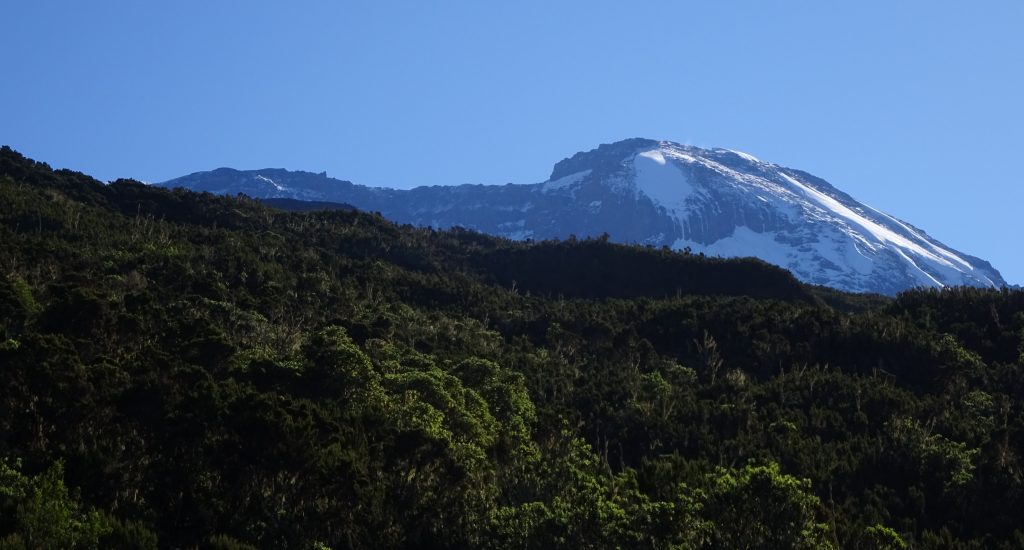 The View From The Machame Huts – Basically The Path Ahead!

So we all headed to our tents for a much needed rest. It got pretty cold during the night, but the sleeping bags and tent was decent, so we were comfortable! 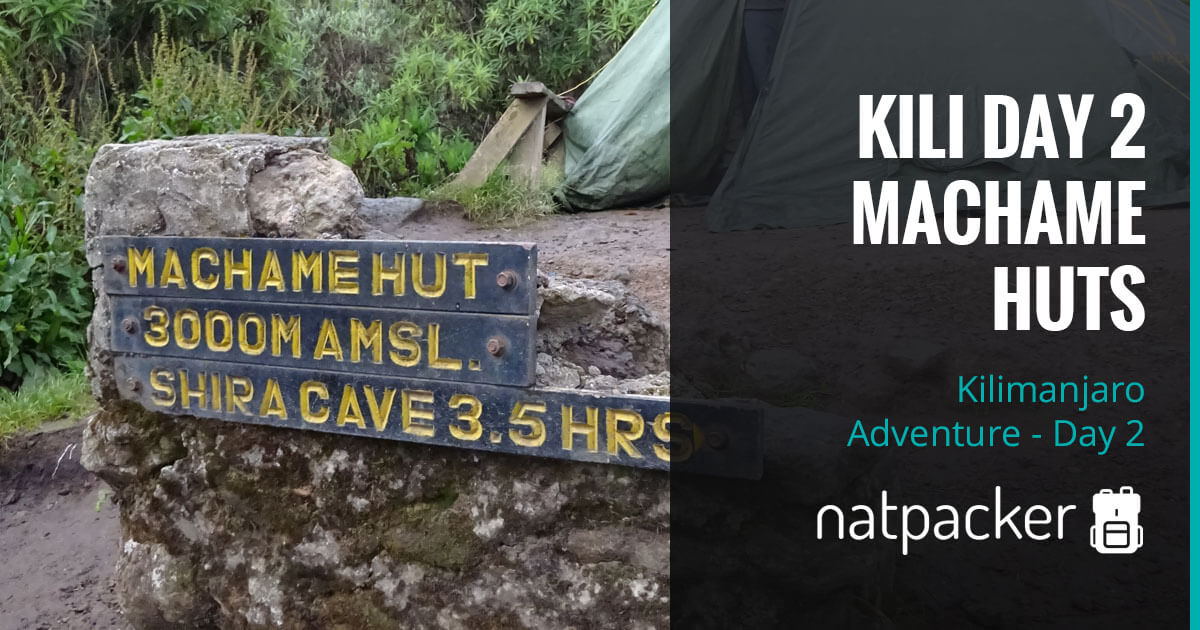