My Kilimanjaro Adventure Day 4 starts at the Shira Camp (3,840m) and ends at the Barranco Camp (3,900). The ascent isn’t very much and so it is an acclimatisation day. This days trek would take me and the rest of the group past the Lava Tower and through river valleys. The trek between the camps is 7.5 miles (12km) and the itinerary stated that it should take 5-7 hours, approximately.

Missed any of the Kilimanjaro Adventure? Use these links to go back:
Day 3
Day 2
Day 1
Planning and Preparation

Me and Dave woke up to the sounds of the camp bustling. It had rained all night, but the tent had done it’s job! Unfortunately the clothes we wore when we walked over the Shira Plateau were still wet! We weren’t the only ones with this trouble!

Breakfast consisted of the same as the day before. A rough brown porridge followed by sausages, eggs and toast. The waiters were determined that we should eat as much as they could force us too!

After breakfast Faraja came in to talk to us. He told us that today we would be going from Moorland to Alpine desert, but would not be ascending much higher. Well, we would ascend, but then descend again. We mentioned out still wet clothes to him and he told us to put them on our tents as we packed. So we headed back to our tents to pack, first putting the wet clothes on top of the tents.

The porters soon came round with water to fill our bottles with. Today I decided to put the water purification tablets in, as did Dave. The day before, when we both didn’t put them in, we’d both had a little bit of a dodgy tummy. We also put in a rehydration sachet.

Once we had sorted our sleeping bags and only had the wet clothes left to pack, we went out to check them. They had only been left out for about half an hour and they were bone dry! It wasn’t even that warm, I was amazed!

A Walk With A View

Our group set off, leaving the porters to clear the camp and over take us in a short time. The walk over the moorland was beautiful – we were walking directly towards the Kibo peak, with the sun above the peak. Spectacular view! The sky was beautifully clear and the air slowly warming up. 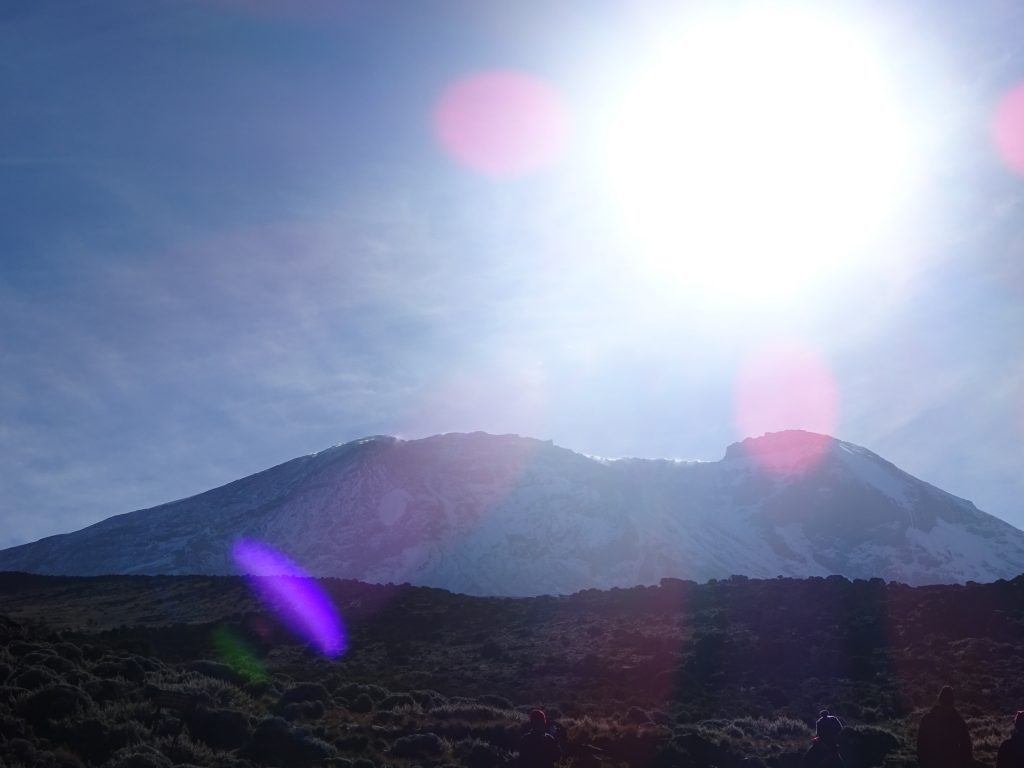 The View Of Kibo Peak

We walked towards the peak for what seemed a few hours, but it never seemed to get any closer! It was fairly flat at this point of the walk, so fairly easy going. 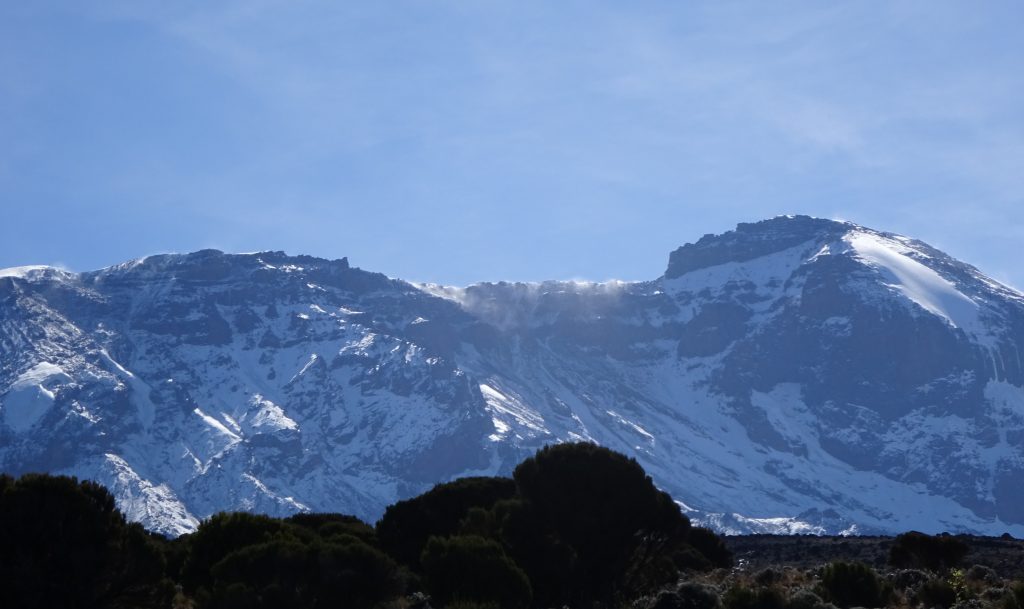 The landscape began to change. Soon the ground was bare and rocky, with no vegetation. The ground was black, made up from volcanic rock. 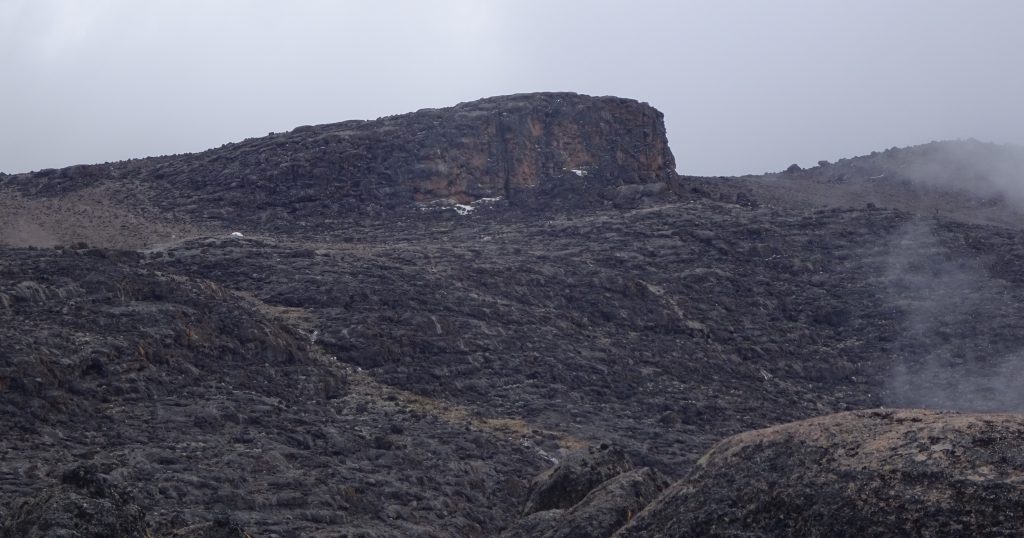 We went up a slope before finding flat ground again. At this point I began to feel the effects of altitude. I began to find breathing a little difficult and was now fully appreciating the ‘pole pole’ pace that Faraja set. We were having more short breaks now, as I think the majority of us were at least feeling a small effect of altitude.

After some time we stopped by a large rock for lunch. Today we were spoilt. Not only did w have the usual hard boiled egg, bread, fruit etc. Today a porter had also stayed with us, so we had hot drinks at lunch! It was actually pretty cold when the sun was behind a cloud, so this was greatly appreciated! As we sat and ate, two white-necked crows landed on top of the rock. I wonder if these were after food too… It was fascinating to watch them preen each other, well so I thought.

We reached the lava tower and that is exactly what it was! A big pile of volcanic rock. It was pretty impressive, especially when the fog moved away! 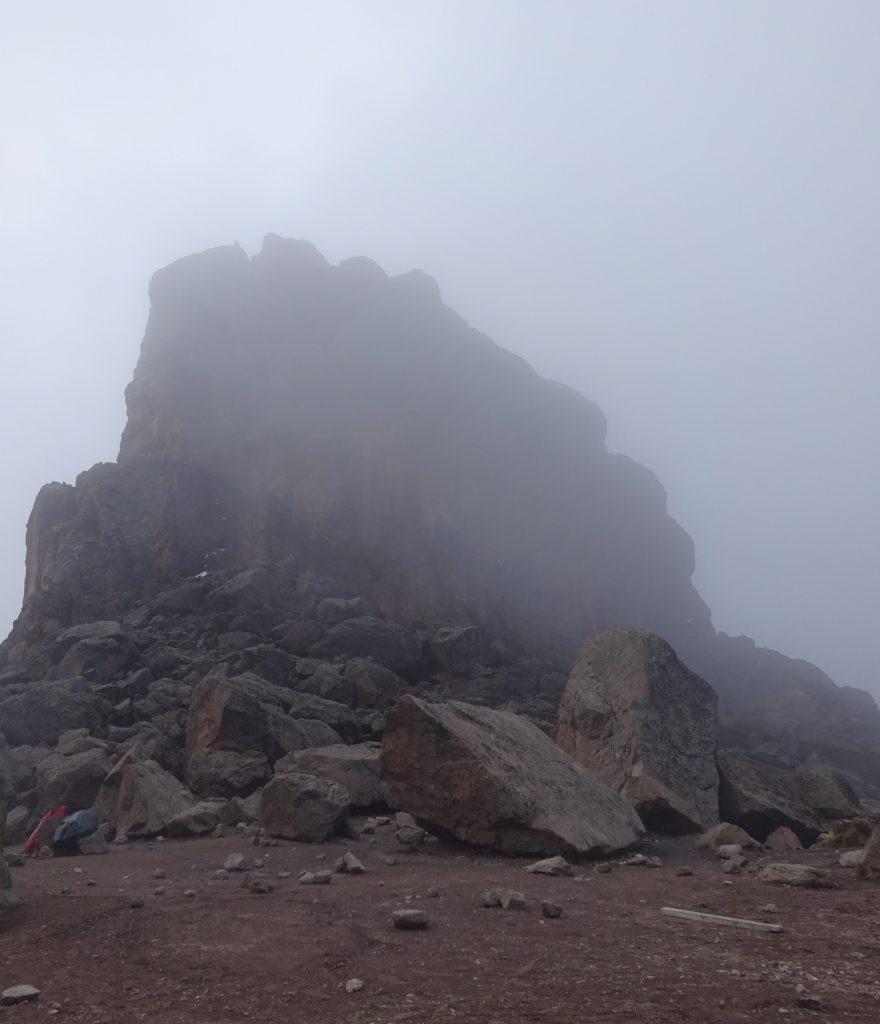 The Lava Tower In Fog

The was the highest point of the day. From here we could look back over the plateau and where we had walked that day. We stayed at the Lava Tower for a short while. Apparently, you used to be able to climb it… 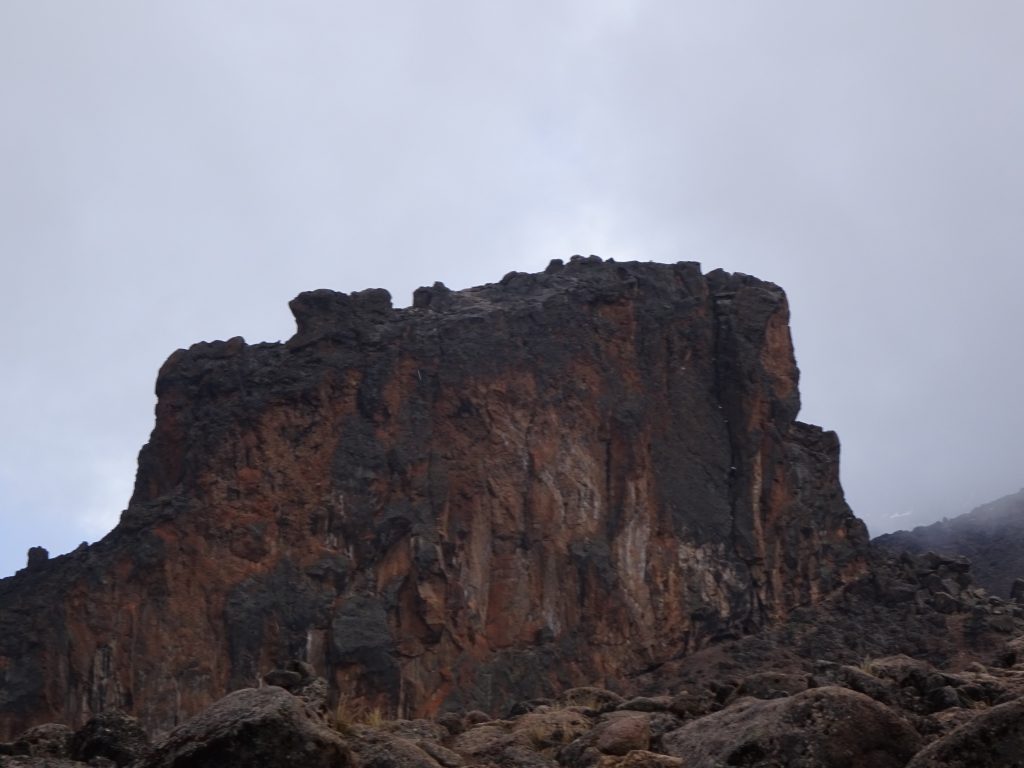 We were now crossing river valleys. There were some cool big cacti that I unfortunately did not get the name of. The path was much thinner here, so we were mainly walking single file. Our group split a little bit, which the three guides were fine with, as long as they could still see us and we had one guide near us. At one point me and Jo separated off, casually chatting about other travel plans. We rounded a bend and could see the hut to sign into camp below us, not far to go! 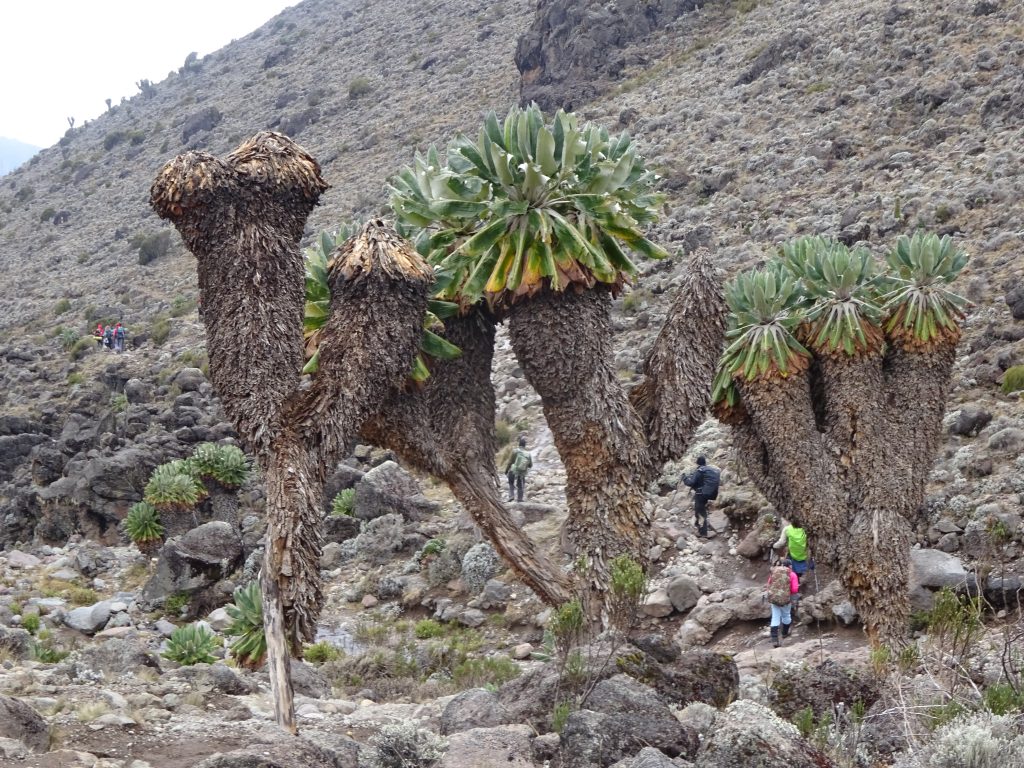 The Most Interesting Campsite

Me and Jo reached the camp together and signed in. As we reached the hut there was a Dutch guy who was just lay on the porch telling everyone how he just ‘needs to lie down’. I think he was a little tired… There was also a guy who was dressed as a wizard. Seriously. What was this camp we had walked into?

After signing in we waited for the others to catch us up. When Faraja came he pointed out Barranco Wall that we would be climbing tomorrow. The joys! We then headed to our camp spot and got settled for the night. Looking Onwards Towards The Barranco Wall

Dinner was the same affair as the last couple of nights. Cucumber soup, a meat stew and rice. But I wasn’t bored of it! It was very tasty.

When the guides came in to talk to us about the next day, we asked them about what we had heard the porters say during the day. We had heard a few exchanges of:
“Jambo”
“Mambo”
“Power”

Then Tim asked if we could play riddles, as he had one to ask us, so we did. We had quite a laugh guessing riddles and trying to remember some to ask! I was actually impressed with how long we kept the game going for!

When it was over, we all headed off to our tents for bed. As the altitude had begun to have a small effect I decided to take some Diamox. Dave did too. We hoped that it would make the Barranco Wall easier the next day! 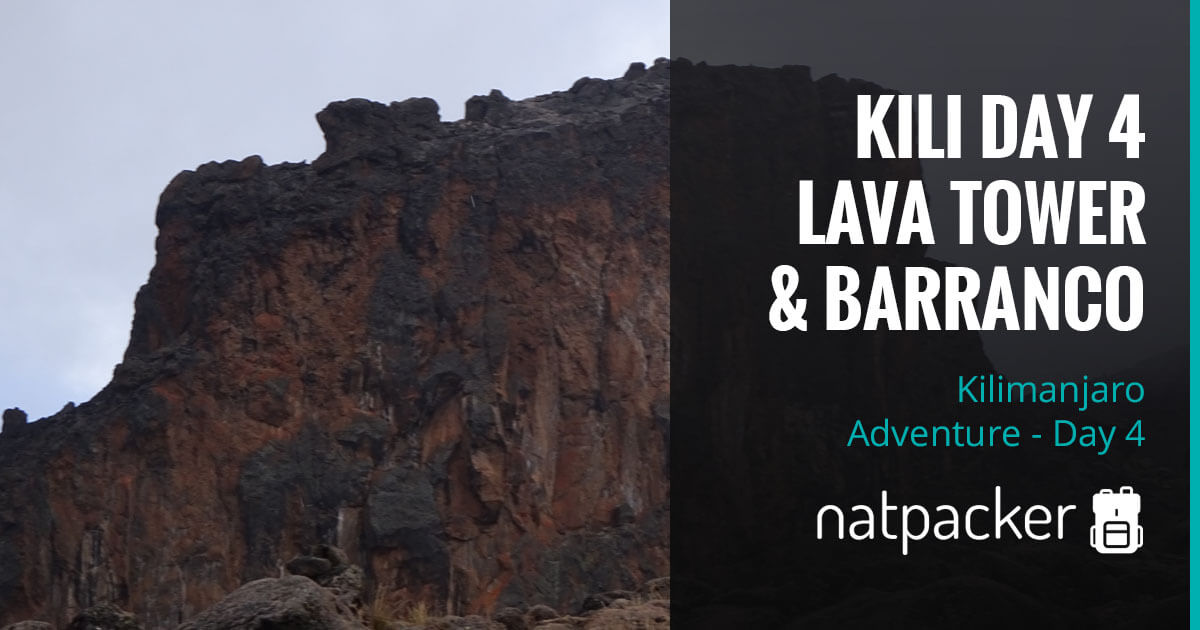