Day 3 of My Kilimanjaro Adventure begins at the Machame Huts (3,000m) at ends at the Shira Plateau (3,840m). The walk was 7.4 miles (12 km), the itinerary stated that this should take roughly 5-7 hours. It starts with a difficult climb and ends with a party! If you missed the previous instalments of the Kilimanjaro Adventure, follow the links to go back:

Me and Dave woke up, got dressed and soon there was a voice at the entrance to the tent. Fresh water had been brought by a porter for us to wash with. The porters really did take good care of us! After we had washed we headed to the communal tent for breakfast.

The waiters were ready to serve us breakfast. Breakfast consisted of a rough brown porridge thing followed by sausages, eggs and toast. The sausages were a little weird, they had some spice. Once again, the waiters were determined that we have seconds, no matter how small.

After breakfast Faraja came in to tell us the plan for the day. He wanted to be off soon, so he gave us half an hour to pack up our gear, ready for the porters. So we headed back to our tents.

I am useless at rolling. Luckily Dave is amazing at rolling, so he sorted our sleeping bags and we were packed up and ready to go nice and quick. Good job I had Dave, or I’d probably still be there trying to roll the sleeping bag! The porters also came round with water for our bottles. Faraja had told us that since the water was boiled, it should be fine to drink without purification tablets. Me and Dave took his advice.

Today was also Gemma’s 30th Birthday. Someone from home had given her a badge to take with her. Obviously she had to wear it!

We shouldered our daypacks and headed out, leaving the porters to pack up camp – I felt quite guilty about this. I don’t like having people ‘serve’ me, makes me feel terrible. But iI guess it’s their job and I’m sure they’re much quicker at it than I would be! It’s all part of the experience, but not a part I like.

The first part of the walk was a very steep climb. After the slowly climbing path of yesterday, this seemed like really tough going! We realised just how slow we were going when our porters overtook us! There was even a bit of a porter traffic jam, so our group and others had to stop for a while. I was grateful for the rest. We sat on the slope and had an amazing view. 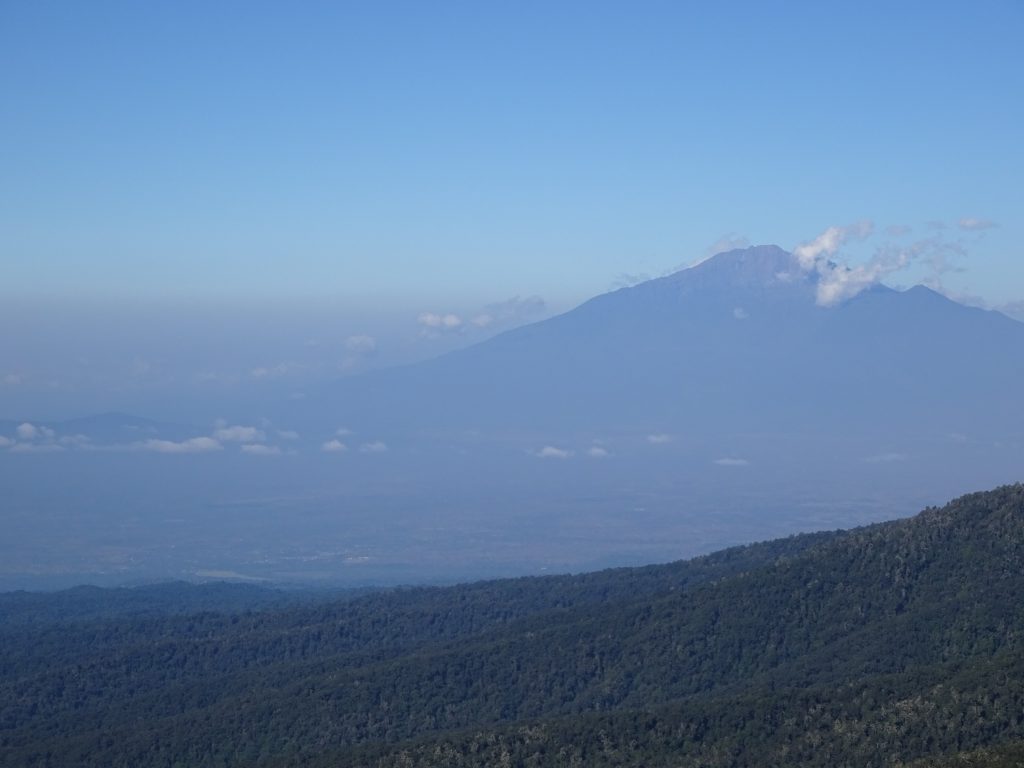 View From The Start Of The Trek

Ask we were waiting for the way onward to be clear, Faraja told us that some of our group didn’t ‘go’ a lot the day before. He found this worrying as it is a sign that we were not drinking enough. We should be drinking lots and weeing lots! Obviously, we took his advice and all tried to drink more!

The traffic jam finally cleared and after the porters had got a little ahead, we set off again. 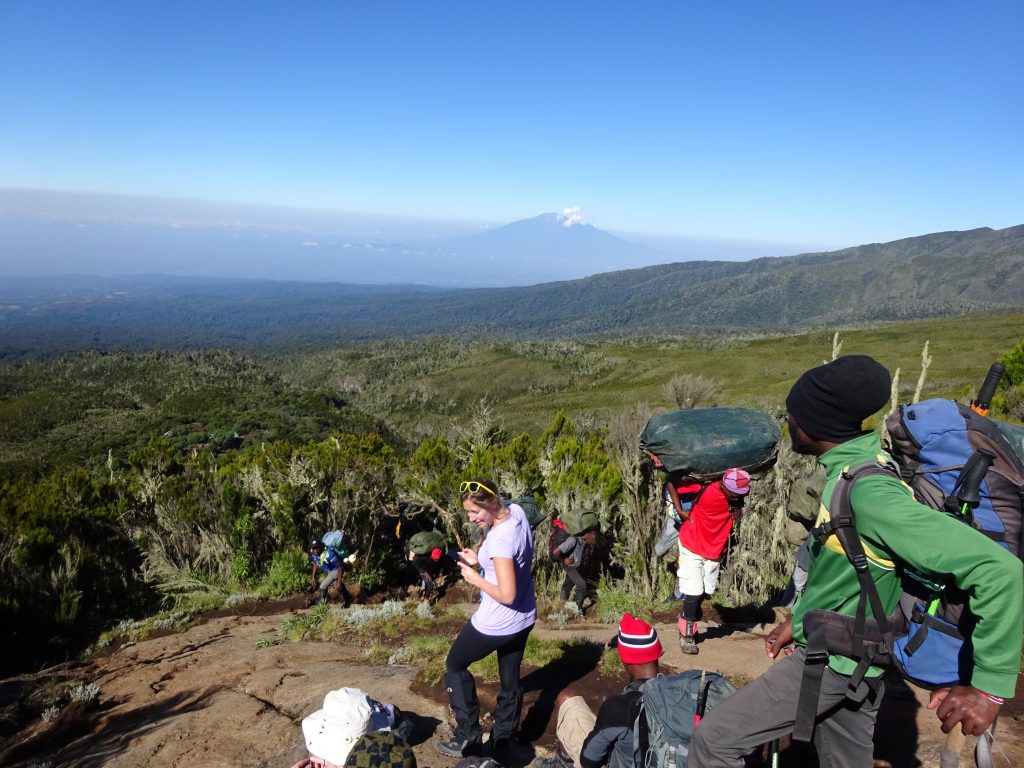 Waiting For The Porters To Pass

As we were walking the guides pointed out a few things to us again. There was a four striped mouse and a red hot poker flower. 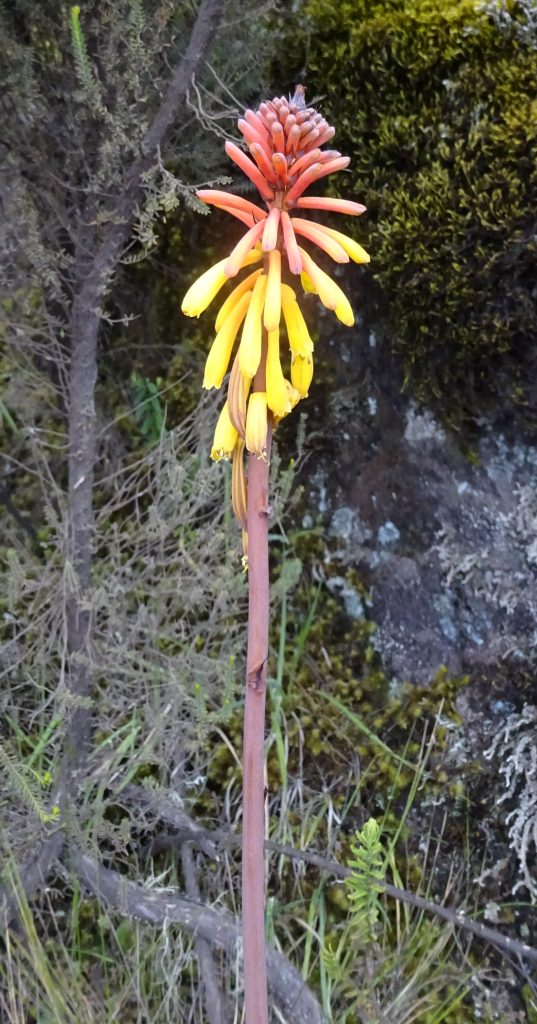 We’d completed the main climb and the majority of what was left was fairly flat. So we decided to stop for lunch. So we found a group of rocks to sit on. Lunch was similar to the day before, hard boiled egg, fruit, crisps and lots of it. As we ate a white necked crow became very interested in us. He wasn’t scared of us at all and very confident. He’s probably been fed by people… 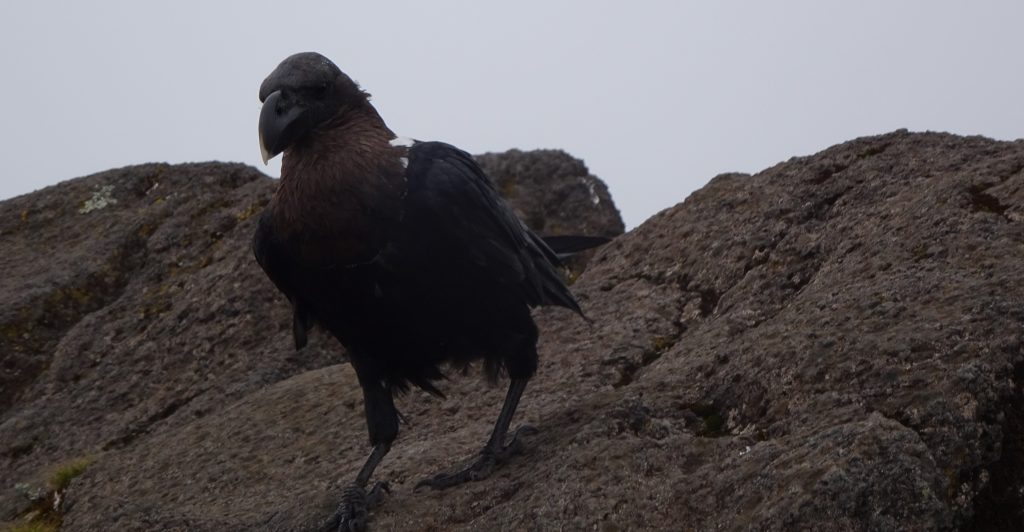 He decided that I was the most likely to feed him, for some reason. He came very close and Dave even managed to get a picture so that it looked like he was on my shoulder! I didn’t give him anything (I don’t really like giving wild animals food, it encourages them to get near humans and you never know if you may give them something really bad for them). He was a little disappointed! 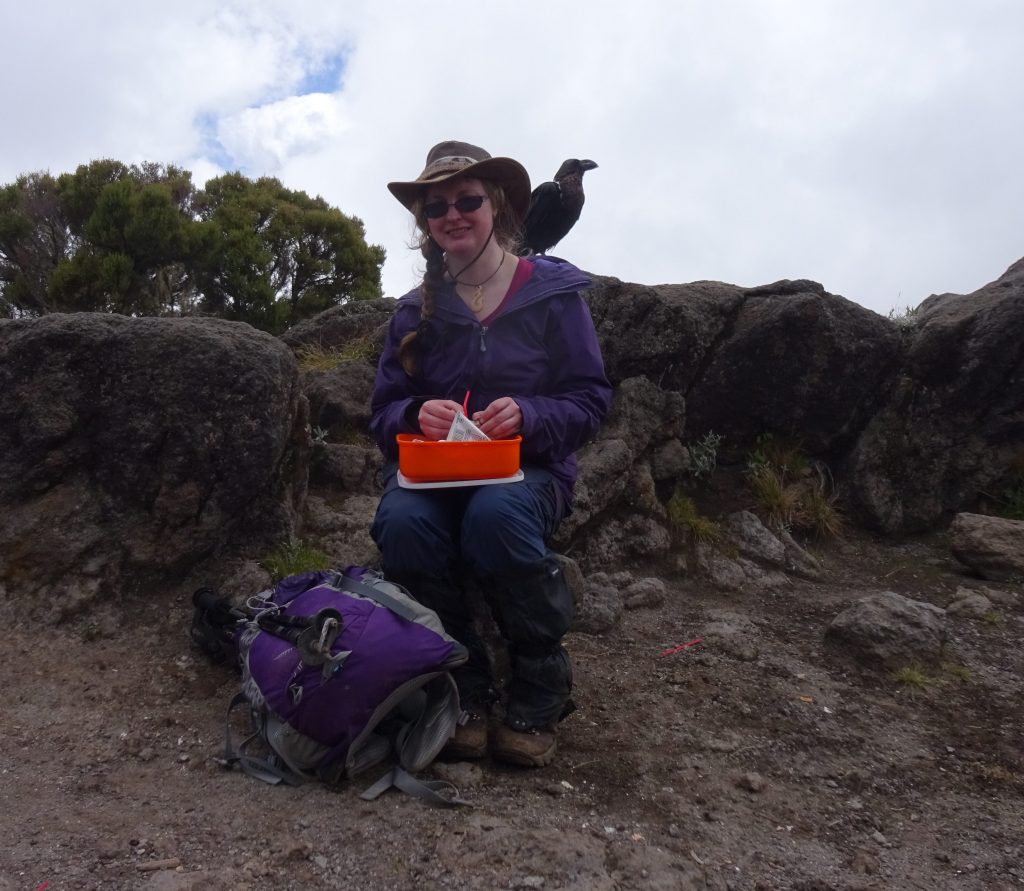 Me With My New Friend 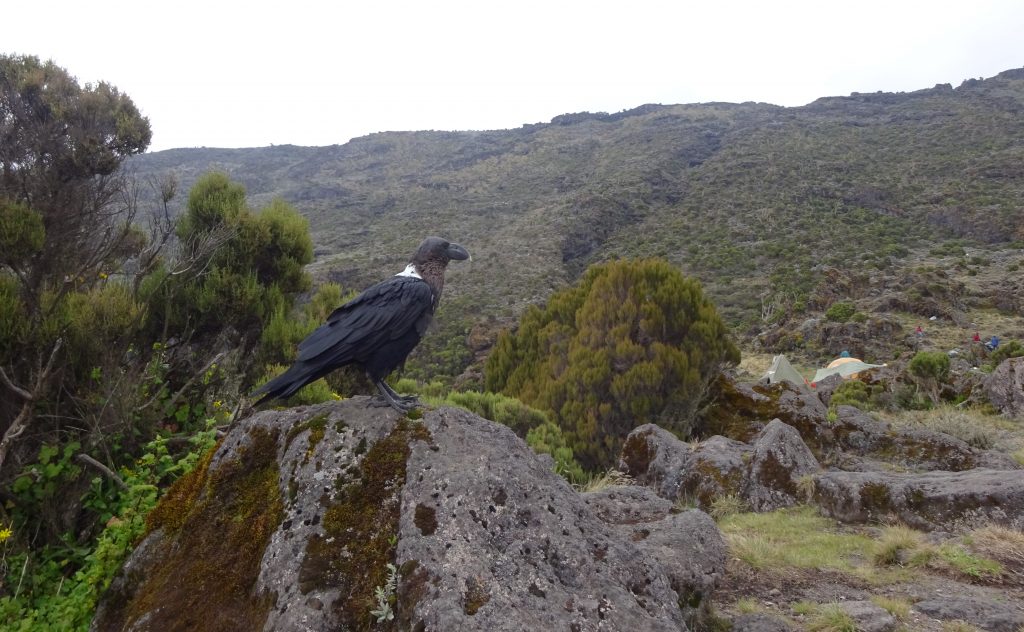 Disappointed White Necked Crow After I Didnt Feed Him

We got going again and continued walking through the moorland. The scenery was really sparse and the walk fairly easy at this point. Although it was still tiring. After some time we were all getting a little tired and Faraja kept telling us the camp was ‘just over this ridge’.

After what felt like the tenth ridge we walked over, we came to a bit of open land that was covered with the rock piles. The guides told us about these piles – on these you could place another rock and make a wish or gain good luck. As there wer so many, maybe lots of people had been wishing for no more ridges! Bizarre, I’ve since seen these in Scotland too. I wonder how and where it all began…But it really was only a little further before we hit the camp, finishing the day’s trek, where there were not just the staff waiting for us, but a lot of small birds were pottering around the camp! 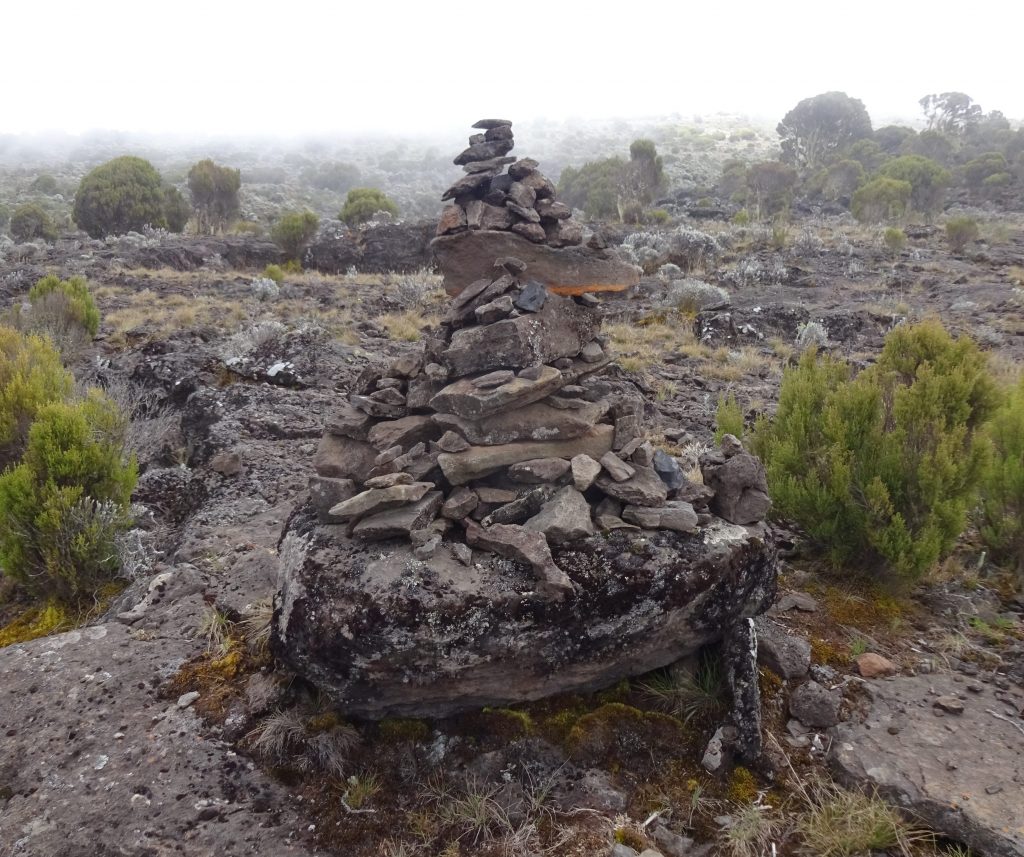 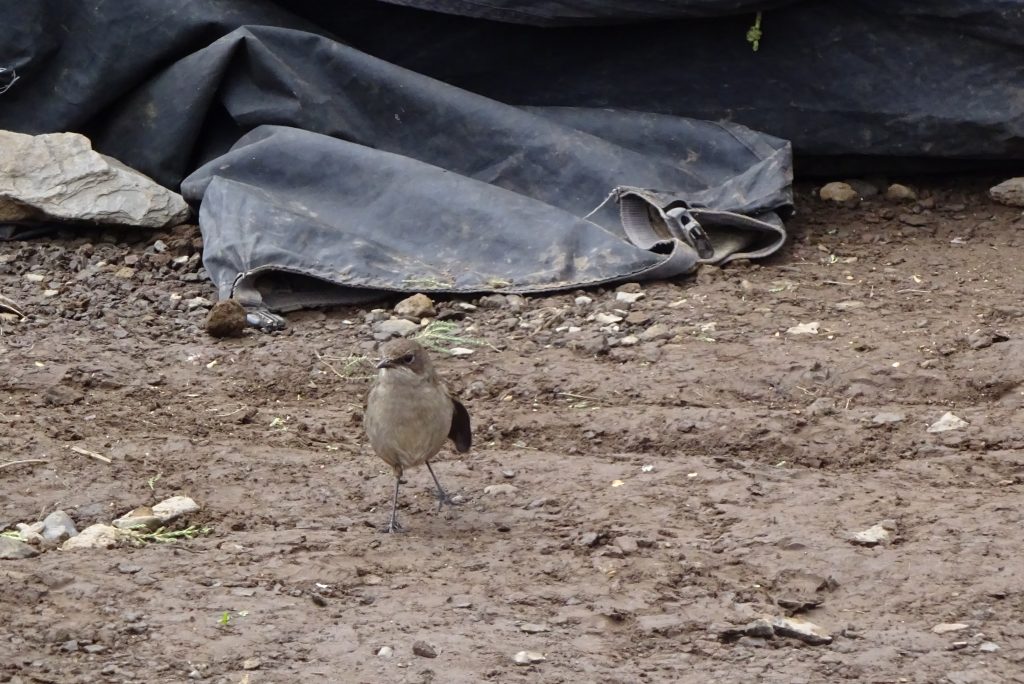 Bird Waiting For Us At Camp

The porters had set up our tents and this time our bags were outside our tents. Water was brought to us as we got to our tents for washing our faces. We then headed to the communal tent for warm drinks.

As we’d arrived in the afternoon, there was still plenty of daylight left. So Faraja suggested a short walk onto the Shira plateau. It was only a short walk and the sun was shining, so we decided to go, without our coats…

On the way we passed some caves. Faraja told us that the caves used to be used for camping, until a ceiling collapsed. Glad we weren’t in there! We went up onto the plateau and had a good walk around. There was a great view of the land below and other mountains in the distance. 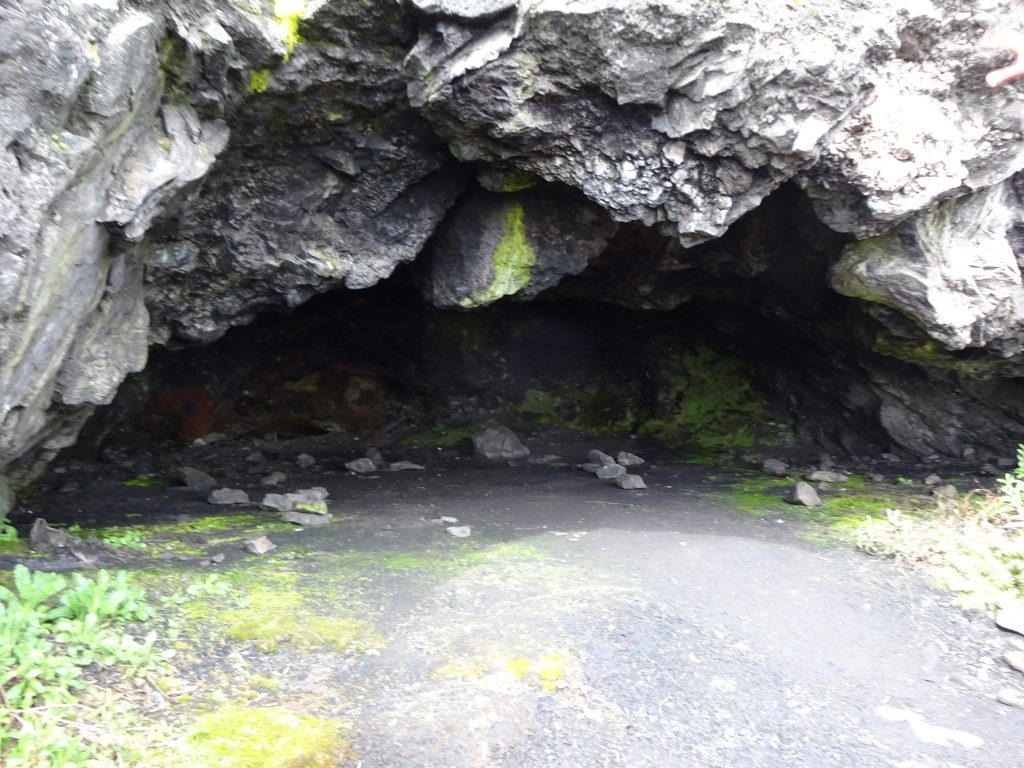 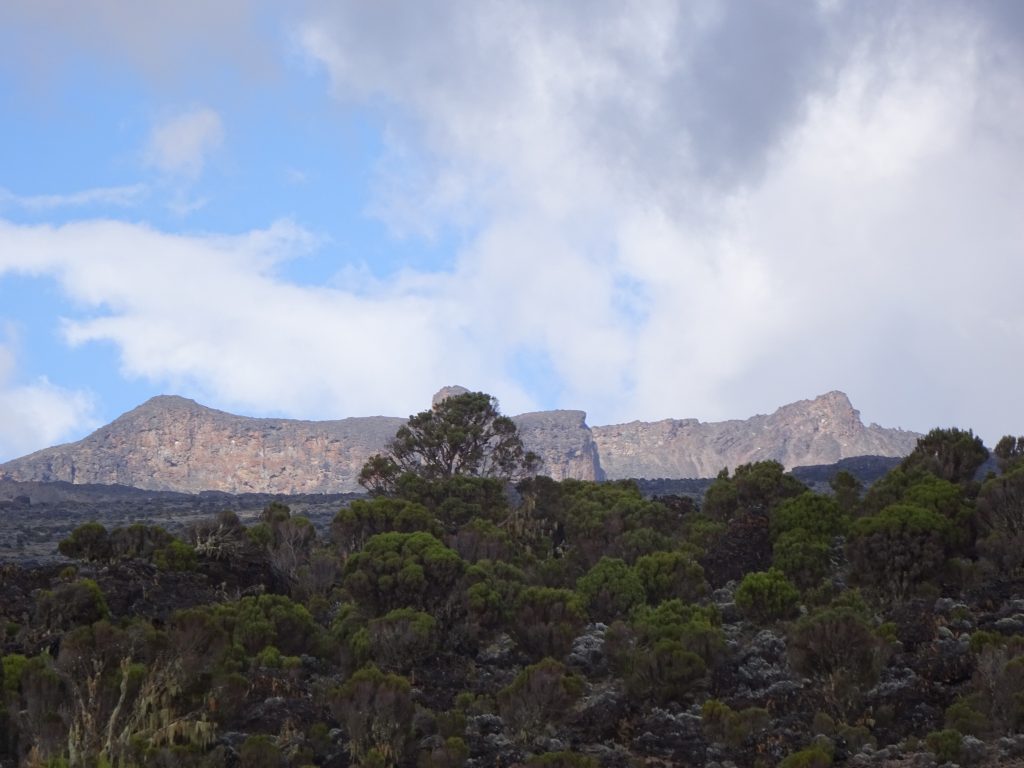 Looking Over The Plains

As we started to head back to camp for dinner, the clouds had begun to roll in. It wasn’t long before the rain started. And as we hadn’t brought coats we soon became pretty wet! So we rushed back to the camp! 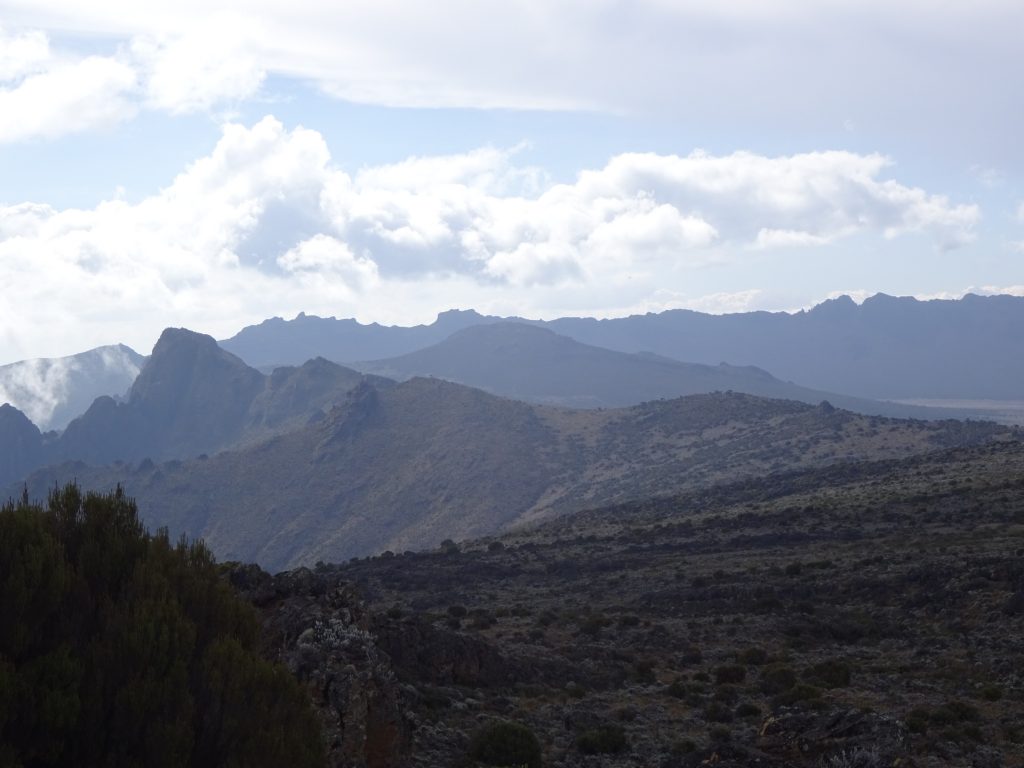 View Over The Shira Plateau

We got back to camp wet and bedraggled. So we got changed before dinner. A side note here – the toilets were luxury! They had a seat and everything!

Anyway, I digress… After we were dry(er) me and Dave headed into the communal tent. Here we were served with hot drinks, cucumber soup, a meat stew and rice. Just like the day before, there was plenty of food and it was all lovely.

As it was Gemma’s Birthday she had brought in a couple of presents that she had been told to bring along. The whole team also appeared with a couple of presents – they’d brought some wine and cake. The wine was shared between us, but the staff refused to join in. We did manage to convince them to all have some cake though! They then all sang ‘Happy Birthday’ to Gemma. It was a really nice personal touch.

As it was now turning quite cold this high up Faraja advised us to fill a water bottle with boiling water and use it as a hot water bottle. Genius. This really did work!

As me and Dave headed to our tent we discovered that our insect repellent was really effective. There was a moth following us!

Read on to Day 4 – to Barranco Camp 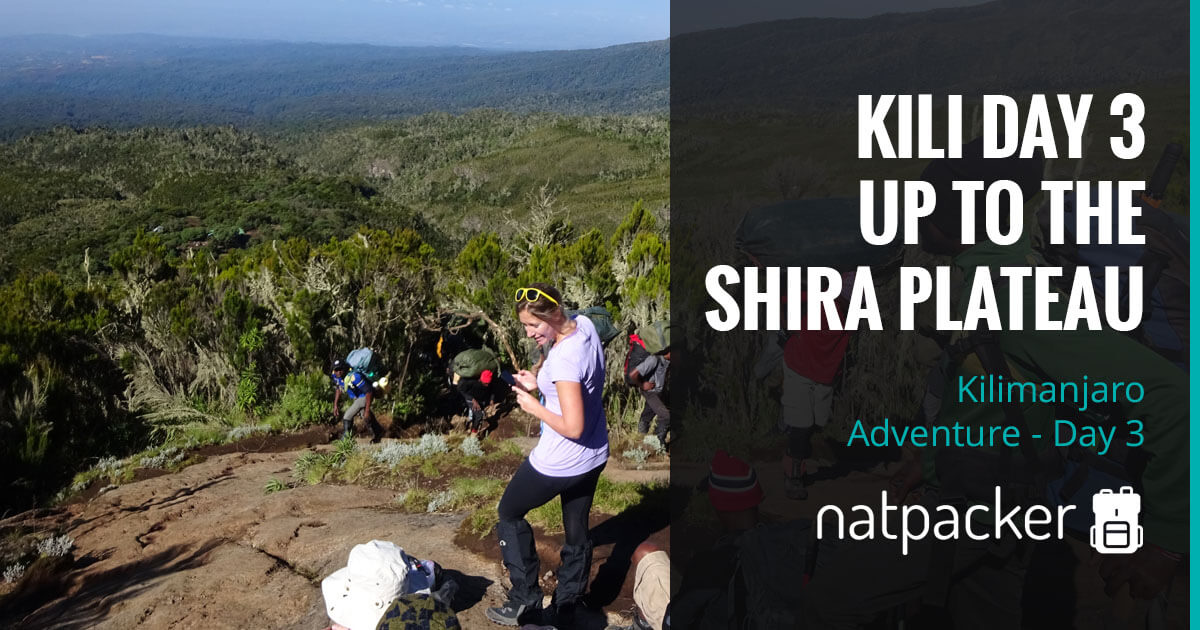