Day 7 has already technically begun – as I was summiting. My Kilimanjaro Adventure Day 7 tells of the beginning of the descent, which is very quick compared to the ascent! The descent would finish at the Mweka Camp (3,110 m), starting at Barafu Camp (4,600 m). The walk would cover 7.5 miles (12km) and should take 4 – 6 hours.

Miss any of the previous day’s adventures? Go back here:

The Wake Up Call

Although I thought I wouldn’t be able to sleep after summiting, due to the light, I was sudden woken by the rest of the camp. I was still fully clothed, not even in the sleeping bag! Dave was the same, seems that we literally got into the tent and collapsed in exhaustion!

We were shocked to hear that the guides wanted to off in about 10 minutes! Our bags and gear were all over the tent due to the mouse drama that morning! So we rushed to get packed and were actually the first to be ready!

Most of us were ready, so Inno and Tim started the walk with four of us, Faraja would catch up in a bit. So we started downhill. This is actually part of the Mweka Track, which is a shorter trek.

Not far from the camp we passed two trolley frames. We asked what these were and the answer was shocking! These ‘trolleys’ are used to run injured people down the mountain. Four porters would run down with the injured person on the trolley. The looked so uncomfortable and just the thought of running down with an injured person bouncing around on the trolley was scary! It wouldn’t be much help if you’d injured your spine and looked painful regardless! But it’s the only way to get someone to a point that they can be picked up by an ambulance. Wow. 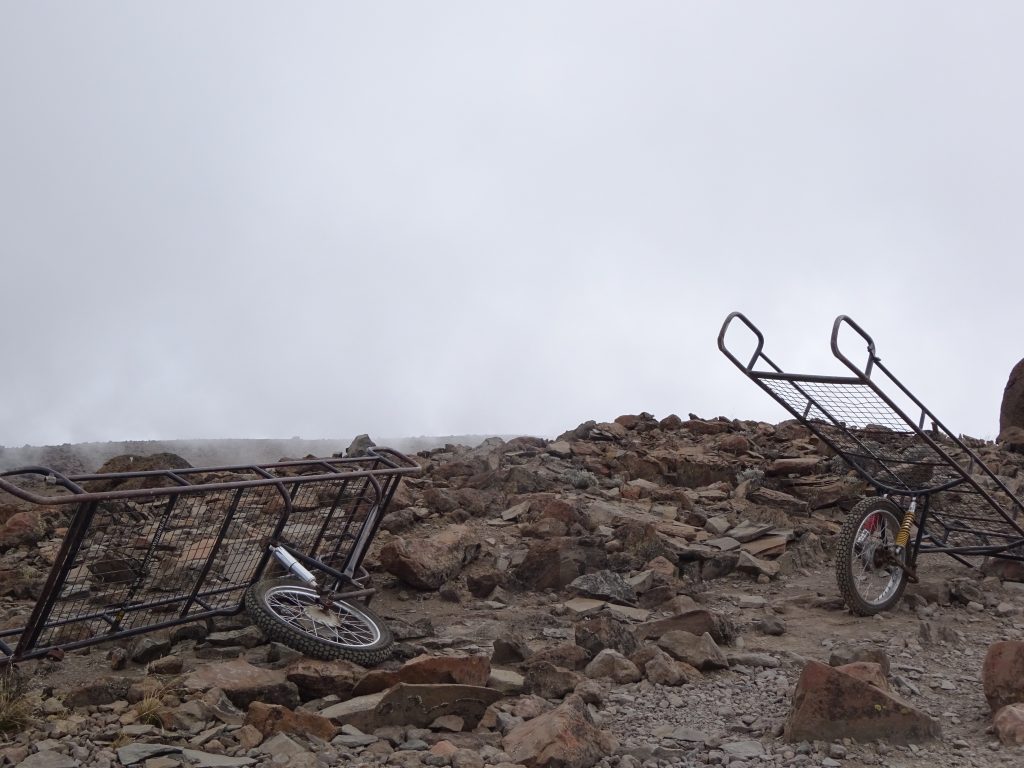 My learning here: DO NOT injure yourself on Kilimanjaro once you are past where an ambulance can reach. You will only become more injured as you are helped!

The descent was very quick. We had soon left the desert behind us and reached moorland. Not long after we were back in the rainforest. It was warm again and it’s surprising when you realise you can actually breathe easily again!

There were some spectacular views. Looking down onto the rainforest and looking back up towards the peak.

We passed some cool rock formations and pretty flowers on the way down. We reached Millennium Camp, but this was not where we were staying. So we pressed on. 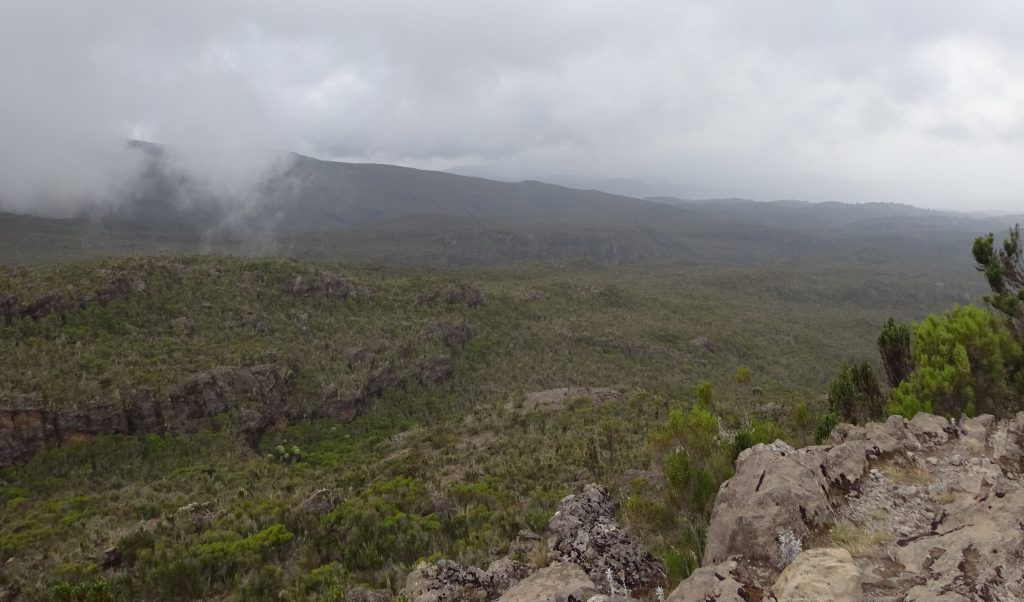 View From Above The Rainforest

Sometime in the rainforest, we passed a pile of rocks, like the wishing ones we’d seen before. Faraja stopped us here to tell us about it.

This pile was not your usual wishing/good luck pile. Only porters put more rocks on here. This is the spot where a porter died. He was slower than the rest, got left behind. Then in the heat he became dehydrated, but he didn’t want to stop. He carried on. Eventually he collapsed and died. He was found later by other porters.

Portering is a dangerous job, but lots of people do it for the pay, well the tips. You have to be so fit. It’s not as dangerous as it used to be and not as many die now, but occasionally it does still happen. The porters don’t have as good gear as the guides and customers. They seem invincible when you look at them carrying more than you could imagine without the added challenge of mountain climbing. Quite simply, they are not invincible.

I didn’t get a picture of this. It felt disrespectful to take a picture…

We arrived at Mweka Camp in the early evening. We signed in and went to get settled for our last night camping.

The most amazing thing here happened – the toilets were real! REAL toilets! Running water to wash your hands! It was heaven! (You really begin to appreciate things you normally take for granted on such a long trek).

I’m not sure where it came from, but the group was suddenly sure we had heard that you can get beer at this camp. We had seen others drinking beer, so it must be true, right? We were very disappointed when we got to the hut and were told that it was not true. Such disappointment… And I don’t even like beer!

But in good news, my ring now fit me! So no beer, but at least I could wear my new engagement ring!

We had dinner of cucumber soup and stew with rice. Dave had lost his appetite over the past few days due to altitude, but he regained it here! 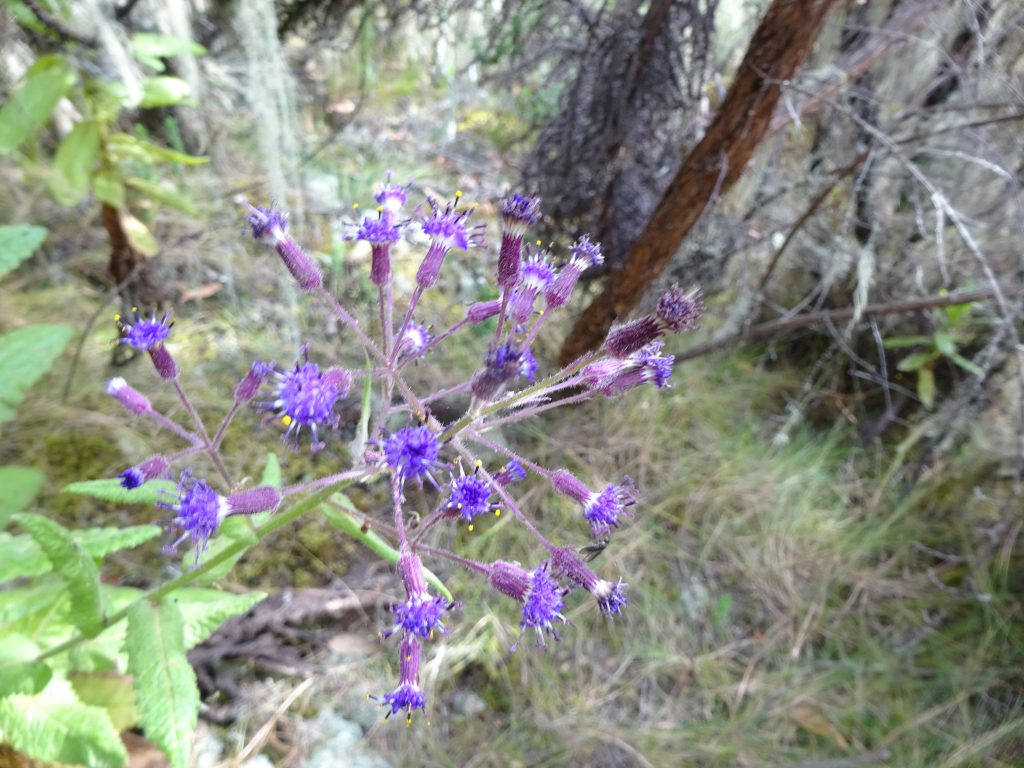 Pretty Flower By The Path

After dinner Faraja came in for his usual chat. This time was a little different though. He asked that tomorrow morning we sort the tips before we leave. We knew you were expected to tip, although it is optional, which is fine. He gave us a breakdown of how many porters/cooks etc there were. We also had a porter designated to each bag, which are classed as personal porters.
We tried to ask Faraja what was acceptable for tipping. But he wouldn’t tell us anything. Which I understand, it could be on his head if after we got back we thought we’d tipped too much on his advice.

I’d tried to find advice before coming to Kilimanjaro, but couldn’t find much information. With no idea as to what wages are it was hard to think what we should tip. The guidelines on Intrepid (who we’d booked the trip with) was US$80 – US$150 per person.

To add to the confusion, me and Dave had GB£, Jo had US$ and Paul and Gemma had TZ$. So we figured it all out in US$. First we worked out our total, then what percentage everyone should get. We figured some deserved more, with the help of some hints from Faraja. We figured the hierarchy went:

We spent hours trying to figure it out. I really wish someone could have helped us. It was the hardest part of the climb! We were so worried about not giving someone enough, insulting someone. I’m sure I speak for all of us when I say we all really appreciated what everyone had done. Even those porters we’d hardly spoke to.

After we were happy with our tips and had gathered the money together, we decided it was definitely time for bed! 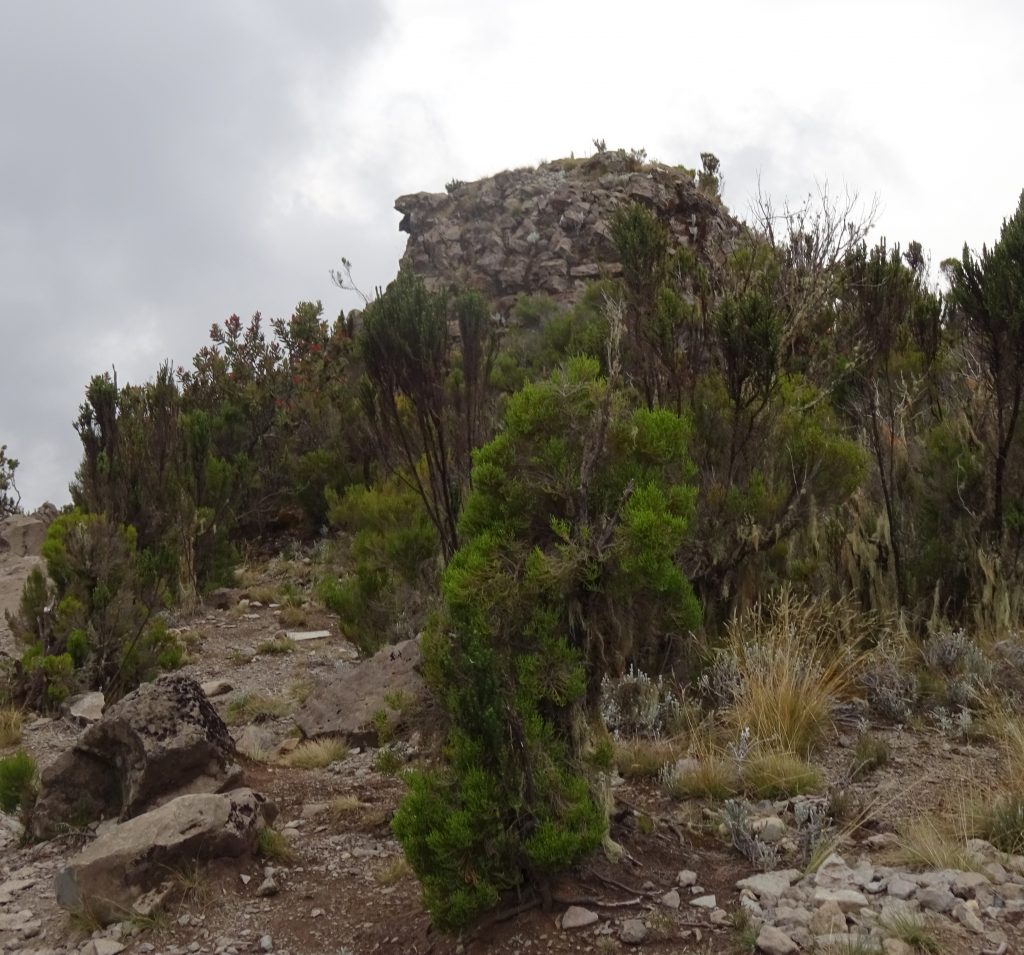 Go to Day 8 for the final day on Kilimanjaro 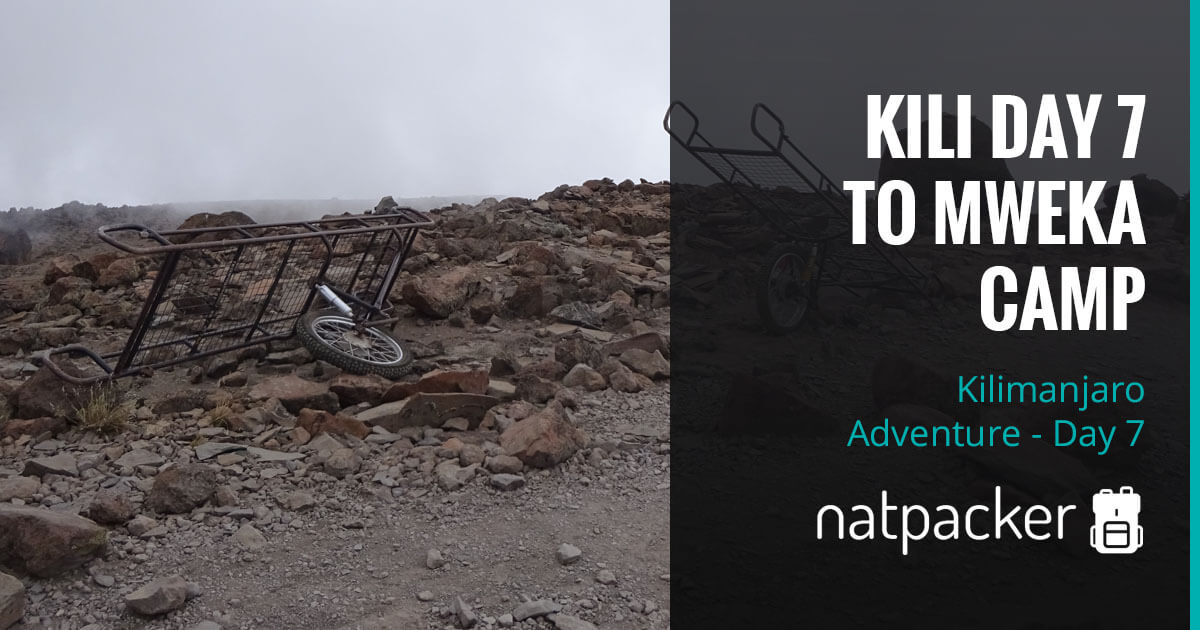