The final instalment of My Kilimanjaro Adventure – Day 9. The climb of Kilimanjaro has finished and I am back at the Kibo Hotel. The adventure is pretty much over, but my flight isn’t until the afternoon, so me and the rest of the group decide to go out for a morning walk.

Did you miss any of the adventure on the mountain? Don’t worry! You can go back here:

Waking up in a bed is an amazing feeling after seven nights camping! So after waking (and having immense pleasure from being in an actual bed) me and Dave headed down for breakfast. We were soon joined by the rest of the group that we had climbed Kilimanjaro with, Gemma, Paul and Jo. The breakfast was pretty much the same as it was when camping – toast, sausage and eggs. But there was also a good selection of fresh fruit.

Over breakfast we decided what we were going to do (all our flights were in the afternoon).Our itinerary had stated that there was a nearby waterfall, I wanted to see this. Everyone else was happy to go on the walk with me and Dave, although I had no real idea as to where it was! So we decided to meet up in half an hour to find the waterfall!

Me and Dave were the last to arrive for the waterfall walk, so luckily one of the others had asked for directions from reception. Basically, walk out of the hotel, turn right and keep going! So we followed these instructions. Mine and Dave’s taxi to the airport was booked for 13:00 and we left at about 9:00, so there was plenty of time!

The road wound on for a while with nothing of interest. After some time we came to a shop, selling artworks and carvings, so we went in for a look. It turned out it was the same woman who had opened a small shop in the hotel last night! We all had a browse and then got back onto the road.

Next we came upon a village. It was still early and the market wasn’t open yet so we carried on. Finally we came across a sign pointing us to the waterfall.

The path took us off the road and onto more of a dirt path. There were times we wondered if we’d gone the correct way! We went past peoples gardens and even what looked like a wildflower meadow! But eventually we came to a hut with a sign on it.

We went in and there were two men there. They ask for a donation to take you down to the waterfall (and don’t let you go without one of them), so we each paid a donation. When we reached the bottom, I must say, the waterfall was impressive. It was huge, with large pools in front of it. The guide asked us if we wanted to get closer, obviously we did. So he told us to take our boots off and go barefoot. Which we did! 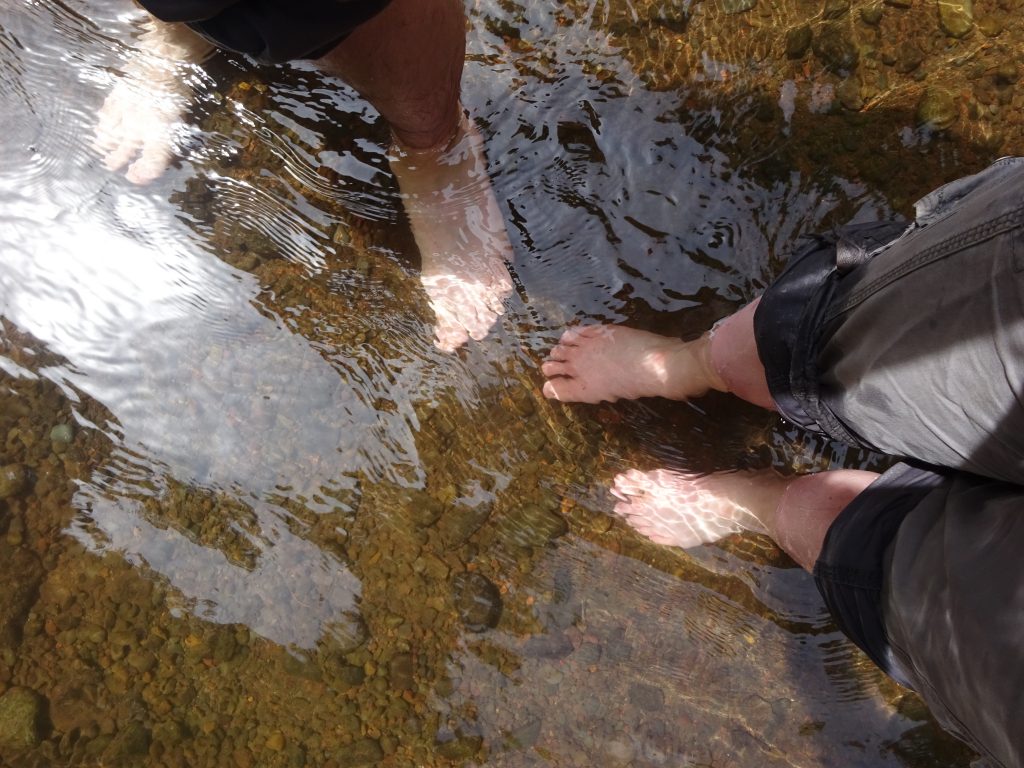 He guided us across the wet rocks and through puddles, constantly saying “Follow my legs!” There were some difficult parts, but he was happy to lend a hand! When we got close he let us have an explore on our own and took some pictures for us.

There were some school kids swimming in one section, even jumping off rocks into the water! We all had an explore and then checked the time and decided it was time to get off. So the guide led us back. 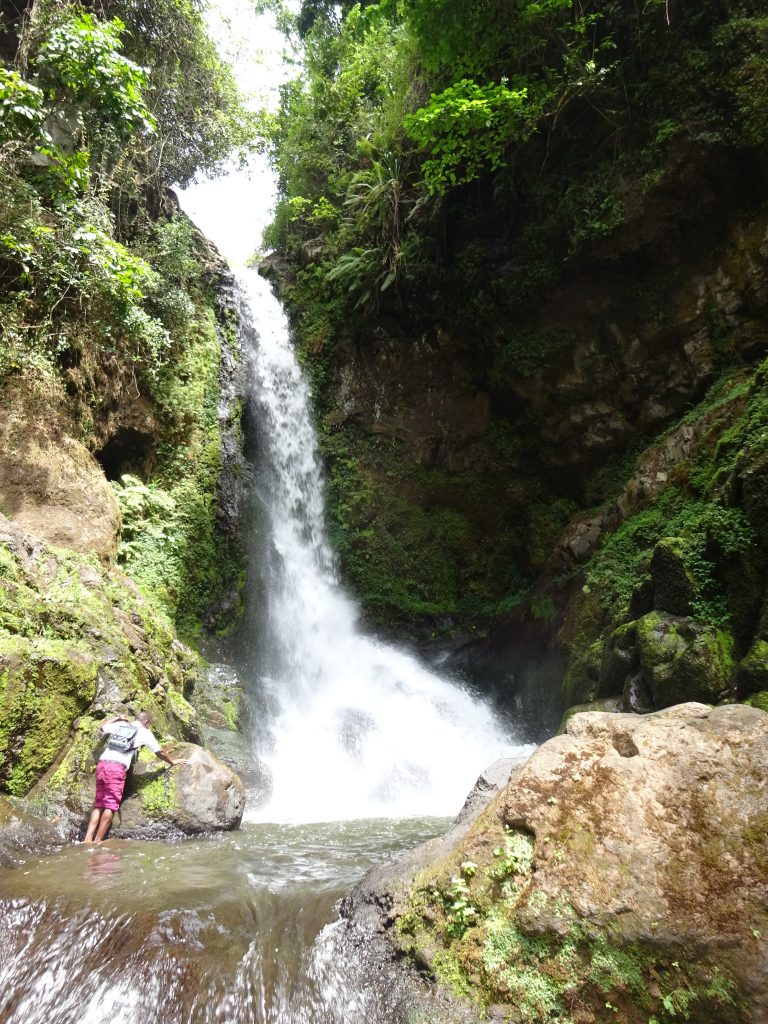 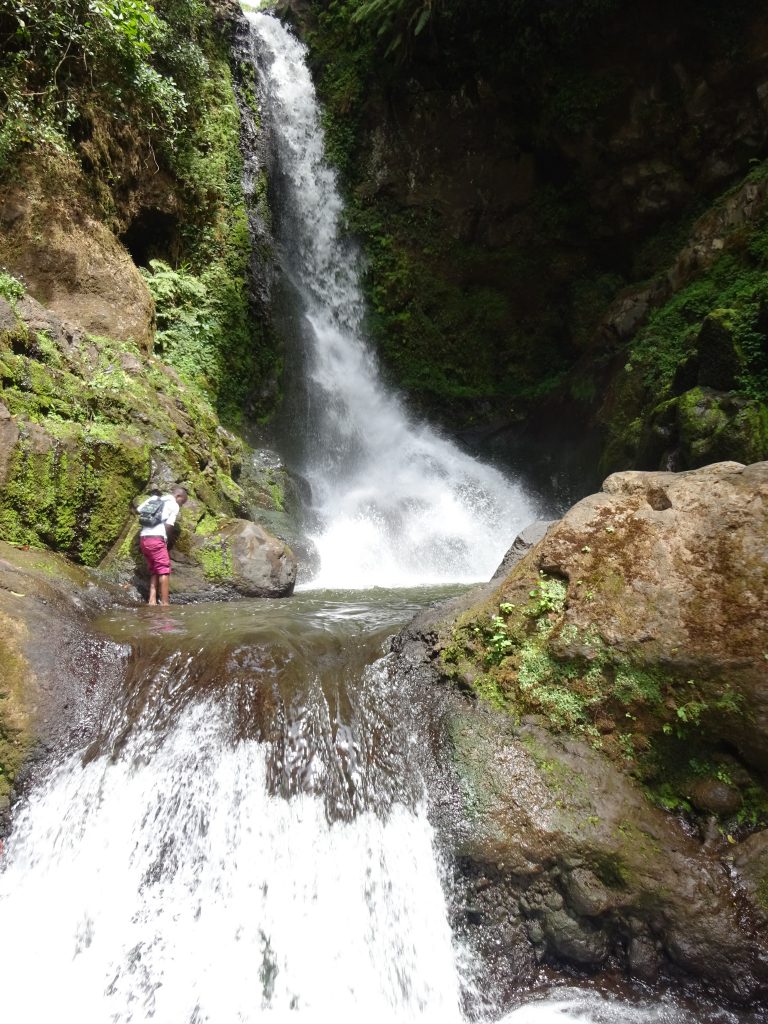 Getting Close To The Waterfall

Halfway back the guide stopped us to talk to us. He told us that he lost his eye and had a glass one. He was telling us how he needed an operation and was saving up for it. I understand why they do this, but I hate it. When I’m going to tip anyway, I don’t need a sob story. It makes me feel like not tipping. It was so awkward.

After we all stood for a few minutes in stunned silence, he lead the way again. And we soon came to the hut and started our journey back. 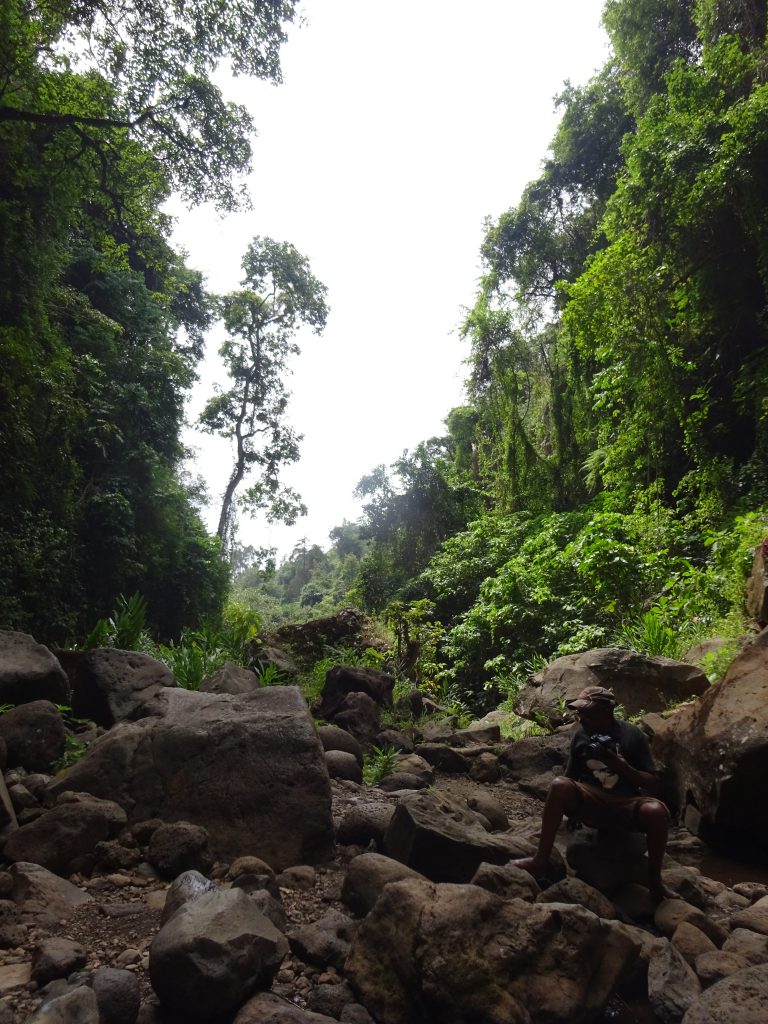 Looking Back Into The Valley From The Waterfall

The journey back was much quicker than getting there, always is though! The market had opened as we went past the village, so we went for a nosey. It was very small compared to the one near the hotel. Even with that small detour, we seemed to be back in no time. 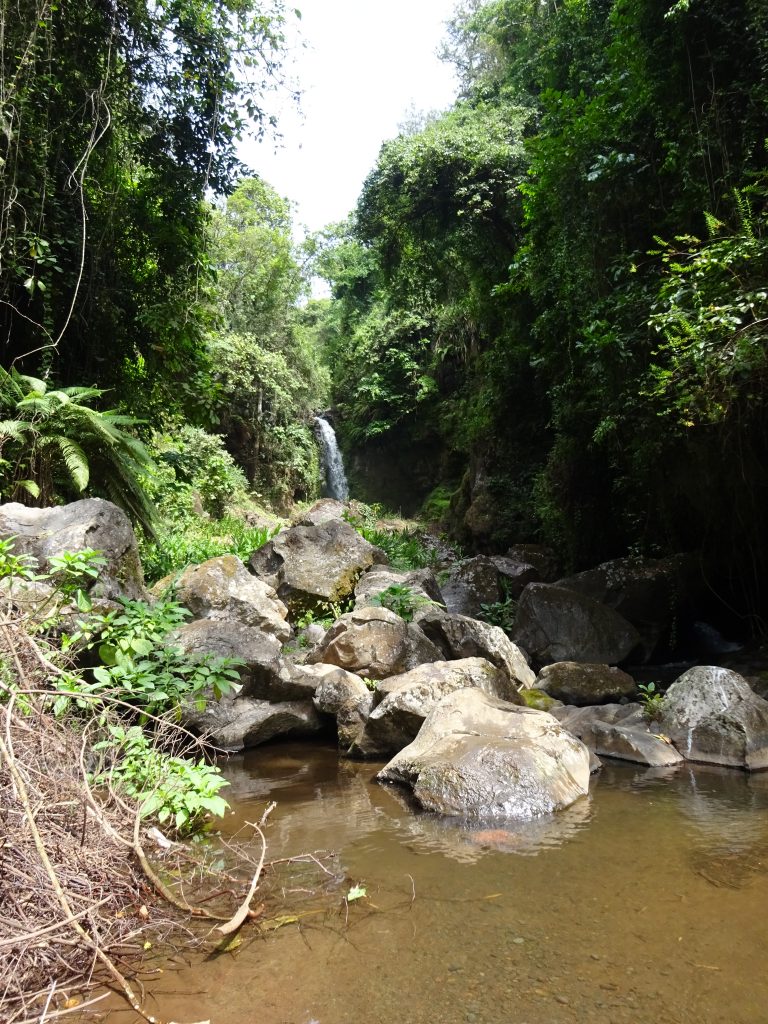 the Waterfall From The Bottom Of The Steps

Me and Dave had the first taxi booked, as our flight was the earliest. The taxi was booked for 13:00, giving us two hours to make the 40 minute drive to the airport and plenty of time to book in, our flight being at about 15:00. As it was before 12:30 we had arrived back, we all decided there was time for one last drink.

So we had a drink and waited. And waited. 13:00 came and went. At 13:15 Dave went to ask the reception if he could ring the Intrepid office as they’d booked the taxi for us. The office was in Nairobi though, so they asked us to wait a little longer as it would be expensive.

13:30 came and the hotel made the phone call for us. They told us the taxi was on it’s way. I was getting a little worried now, we only had an hour.

The taxi finally arrived at 13:40. To say I was a little worried would be an understatement. We quickly said goodbye to everyone and threw our bags in the boot.

Dave always tries to talk to taxi drivers. This one was not having it! Even when we said ‘Mambo’ he would not reply. We sped down roads and I was hopeful, though staring at the clock…

Then something else happened to make us even later. He stopped for petrol. He spent over 10 minutes filling the taxi to the brim! Two of the staff at the petrol station were bouncing the car up and down, to get any air out so the driver could fit every last drop into the car. Now I really was worried!

Near the airport we then hit traffic! I could see there was less than 40 minutes to our flight left. The check in closed half an hour before take off. We had 10 minutes.

The Loveliest Airport EVER

We arrived 10 minutes after check out had closed. This has never happened to us before. I was close to panicking! They driver pretty much threw our bags out of the boot and sped off, I wonder why he didn’t hang around for a tip…

We grabbed are bags and sprinted into the airport. We got to the desk quickly (Kilimanjaro airport is tiny) and showed our tickets to the woman. She was not happy. She told us we were late. Another woman got involved. We apologised and explained what happened, asking if there was anyway they could let us through. After they’d heard us out one woman, the elder, went outside, I think to look for the taxi, but he was gone. 15 minutes to go…

She came back, but luckily she was angry at the fact that a taxi had screwed us over and not with us. She told us to pass our bags over and go through, but we’d have to be quick. I could’ve hugged her!

We ran to the security, but had to queue to get through. Even though it is only a small airport, and so a small queue, this delay had me worried. Every minute felt like an hour. But we got through fairly quickly.

On the other side there was a lady waiting for us. She ran us to the gate and outside. Hurrying us to the plane. We were on! I have never been so relieved to sit down on a plane in my life!
The scariest and hardest part of My Kilimanjaro Adventure was over – catching the flight back!

As we took off me and Dave discussed how it would’ve all been fine if we’d missed our flight. We would’ve just gone on a safari trip… Everything’s funny when it turns out ok!