The night of summiting had arrived! Starting at night, so that the group should reach the summit for around dawn. My Kilimanjaro Adventure Day 6/7 starts and finishes at Barafu Camp (4,600 m). We climb to the Uhuru Peak, which is 5,896 m, trekking only about 2.5 miles (4 km). According to the itinerary the climb should take about 8 hours.

If you missed any of the Adventure up to this point, use these links to go back:
Day 6
Day 5
Day 4
Day 3
Day 2
Day 1
Planning and Preparation

And So It Begins…

We were woken up at 11pm to begin our final ascent. It was cold, so cold. No wonder the camp is named ‘Barafu’, which is Swahili for ‘Ice’. We had a warm drink and some biscuits in the communal tent. Then we had our water bottles filled with warm water and it was time to set off.

With head torches on so we could see our path, we started climbing quickly. It was a steep climb from the beginning. Most other groups had set off at around the same time, so soon the narrow path was jam packed. Luckily, as we were a small group, most let us past. 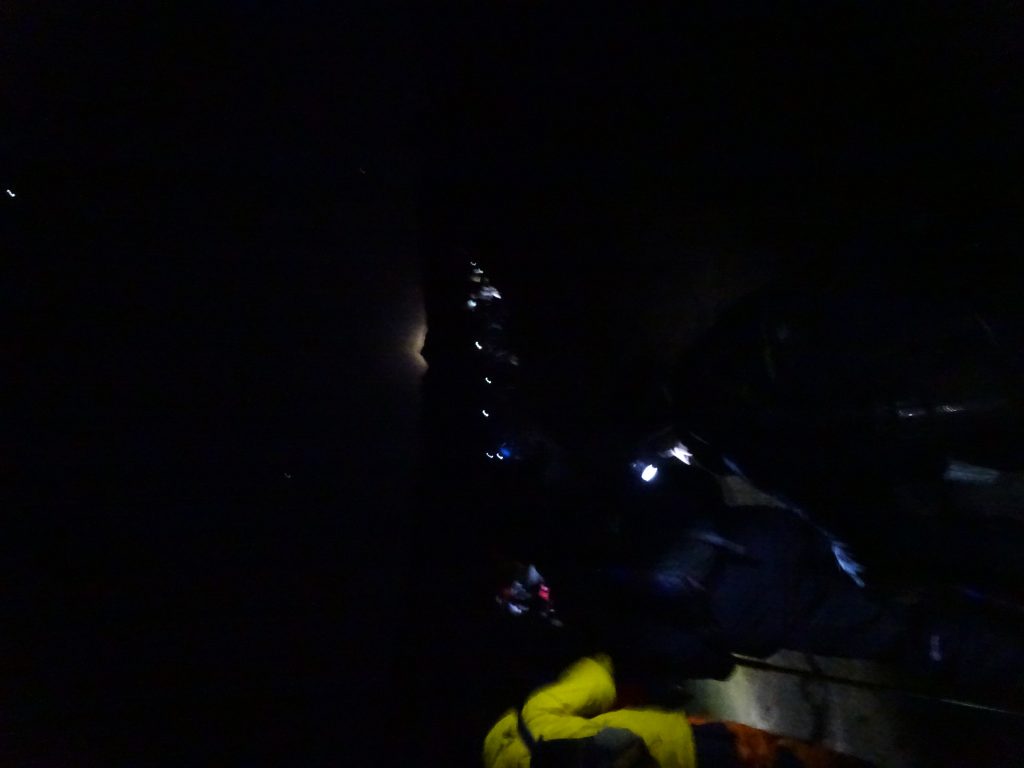 Starting The Ascent To Uhuru Peak

However, at one point there was a massive group ahead of us, and no way really to pass them. Inno was leading the group at this point and decided to take us off the path a little to get around them. This was going well, until suddenly the other groups’ guides started shouting at him! He was going a little too far of the path for their liking! They stopped their group and let us get in front.

Getting to the front of that group was a mission in itself. We were walking across a steep slope, which consisted of scree. There were some scary moments! Dave accidentally caused a large stone to fall, which nearly took out 5 people!

In all honesty, I don’t remember a lot of this part of the adventure, I know I was tired and cold! I just remember random bits. I remember at one point I stopped to put ankle supports on and it was fairly flat.

We also had a summiting porter, who brought equipment to make hot drinks with. He would also help with carrying our packs, as would the other guides. I really didn’t want to have anyone else carry my bag, I didn’t think it was fair on them.

I do remember though, at one point, I’ve no idea how long we’d been walking or how much further we had to go. The guides didn’t like telling us how far we had to go.

But anyway, at some point during the climb the cold and altitude just hit me all at once. It was horrible, I literally stopped walking and had to sit down. Dave was asking if I had anymore layers and I said no. He looked in my bag and funny enough, I did have extra layers…The porter made me have something to drink, I got layered up, including my balaclava, then he took my bag. I wasn’t about to protest at that point. I was also given a pair of hiking sticks, which I normally will not use, I think if everyone uses them it can damage the earth. But at this point I really needed them. So we set off again.

We were a little before Stella Point (5,780 m) when Faraja suddenly bounded off the path. He bounded onto a ridge that was just off the path, he was so full of energy! He started shouting to us “Look, we’re almost there! The sun is coming up!” And other encouragement. In all honesty, my main thought at that point was how I just wanted to push him off the ridge! He was far too energetic and happy compared to how I felt! Not fair!

Not long after we reached Stella Point. It was still fairly dark and I think we just wanted to get to Uhuru peak now! So we didn’t hang around here! 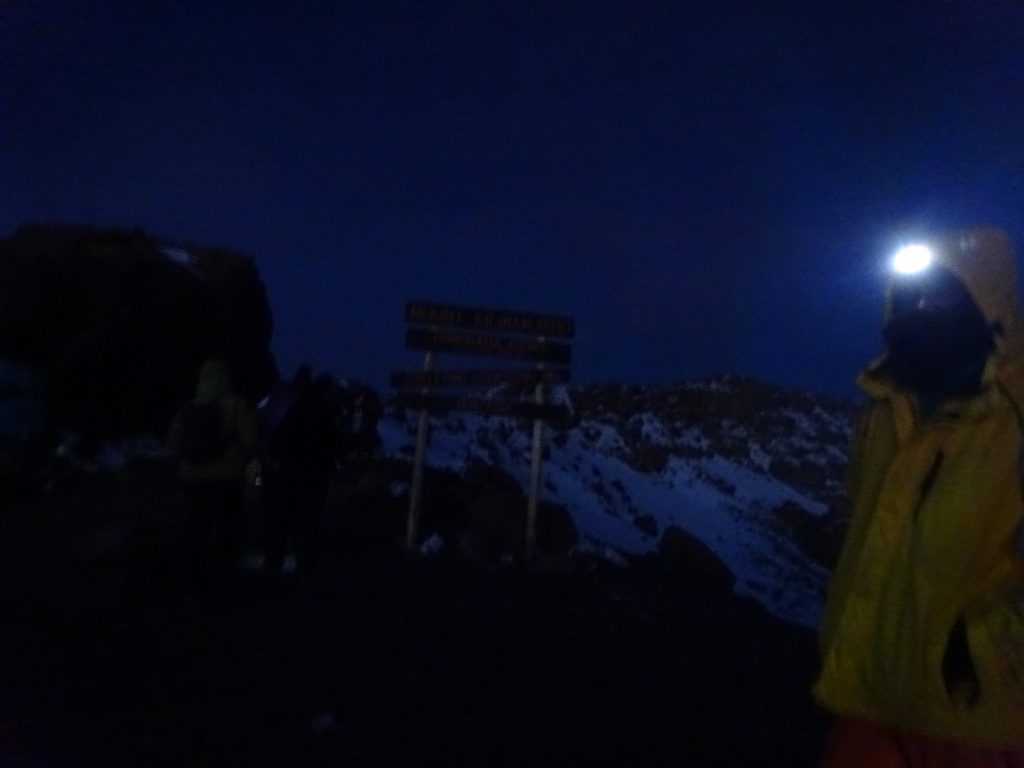 Stella Point On The Ascent

The last bit was nowhere near as steep. The walk takes you around the rim of the crater. It is meant to take an hour. It felt like forever! I kept telling myself “That bit there, that’s got to be it” It generally wasn’t. Even though this part was a fairly flat walk, it was so difficult. What with the cold, the altitude and my own exhaustion. So difficult.

View From The Crater

Don’t get me wrong, it was very beautiful, but I wanted it to end! I couldn’t fully appreciate the beauty of the crater. The sun being reflected by the snow, just didn’t take my breath away – I had no breath for it to take!

Then suddenly, the actual peak came into view. This time it must be it, people were crowding round. It must be it! Dave suddenly gained a bout of extra energy and shot off in front. Then as he had almost made it, he turned around and waited for me. He wanted us to make the peak together. So we did. On The Crater Rim

So we made it. I was so happy that I’d managed it. I made it through pure determination!

Me and Dave shared a chocolate bar and waited for the others to join us. Then it was a whirlwind of everyone taking pictures and having their picture taken. Faraja asked us if we all wanted a hot drink, but we all declined. It was far too cold to hang around for long!

So after hours, days of trekking we had finally made it. And we stayed for only a few minutes before heading back down! But that’s the way of it I guess! 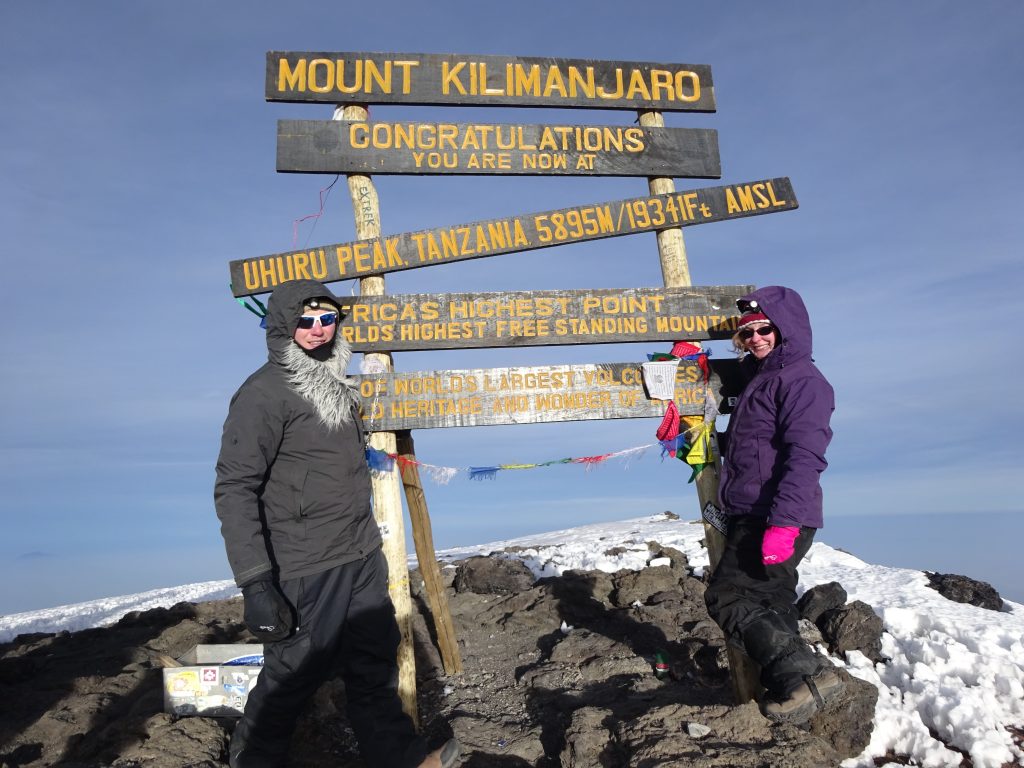 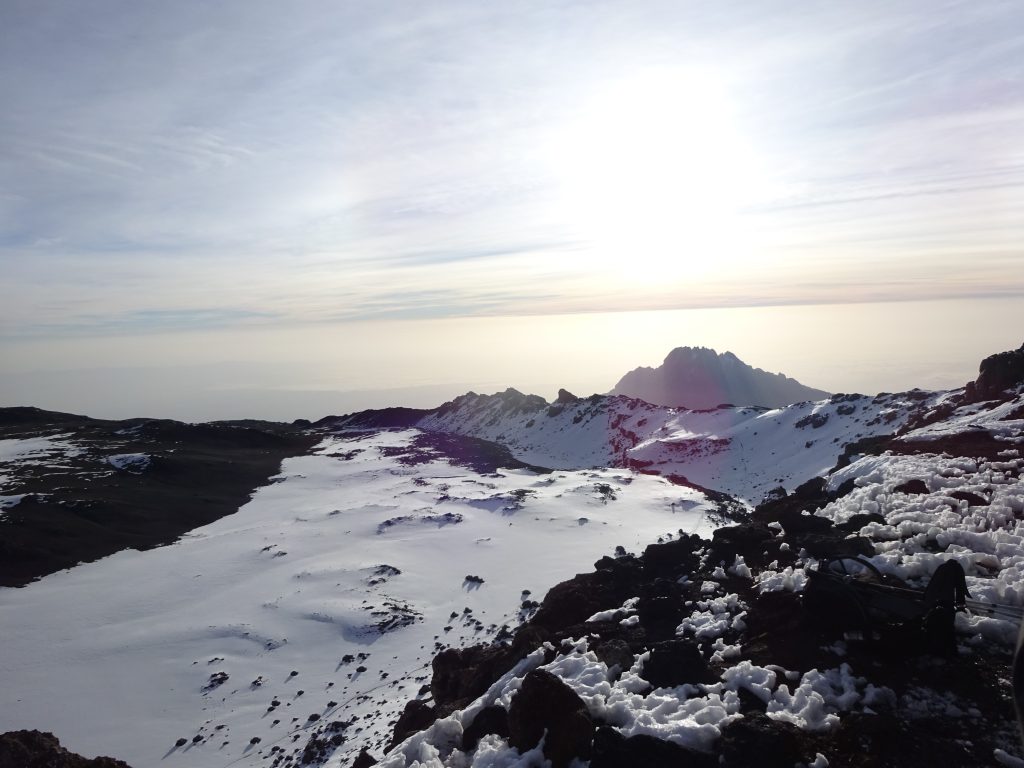 The View From Uhuru Peak

Here Faraja also decided that we should have a warm drink, as it was a little more sheltered. So we did. In all honesty I didn’t really want the hot drink, but I think it did me good. I had the sugariest hot chocolate I’ve ever had in my life! 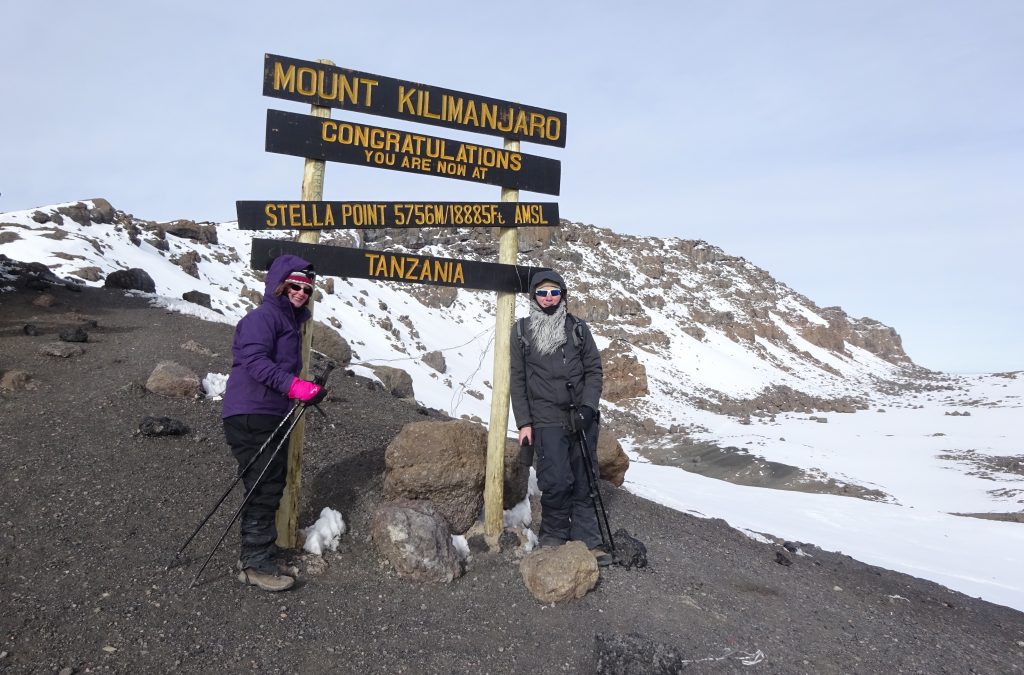 Stella Point On The Descent

The walk down had its own challenges. It was steep. We were also walking on scree. So there were a few instances of slipping and sliding. I can’t scree run, it’s not a skill I’ve developed. I have tried several times, but just can’t!

As we climbed down I could feel some strength returning. I wasn’t as tired, I was warming up. At some point I took my bag back from the porter. I think he wanted to take it all the way for me, but I didn’t think it was fair for him to carry everything, especially when I could again manage it. 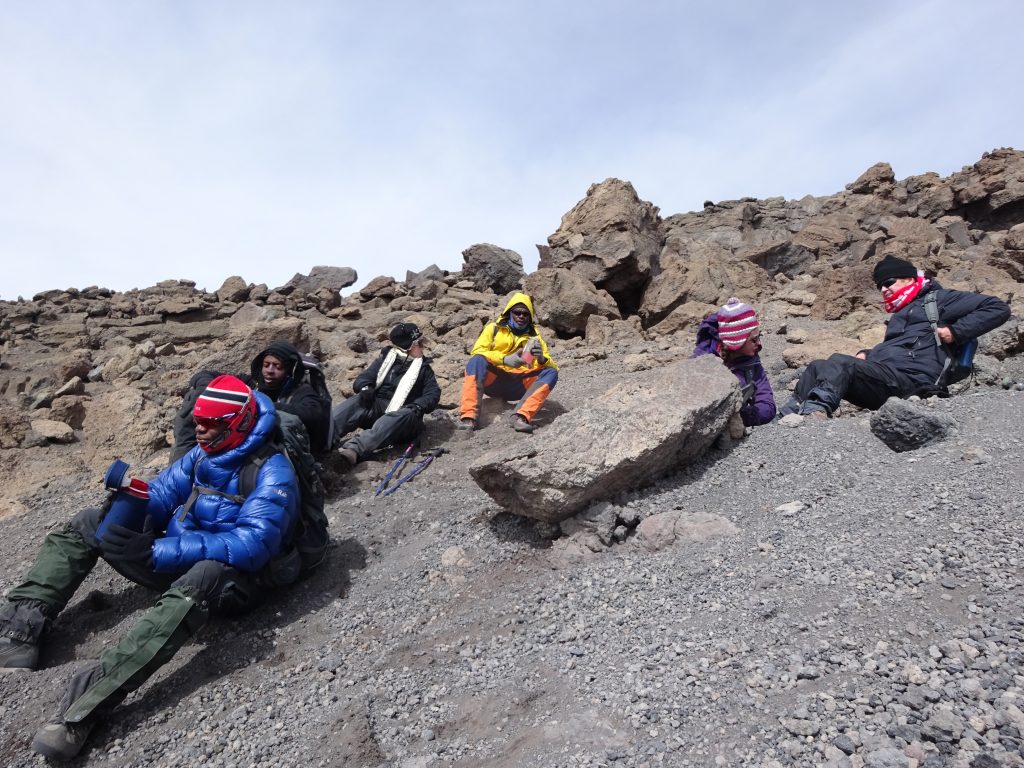 Having A Rest During The Descent

I looked back to what we had climbed. And WOW. It looks impossible in the daylight, when you can see it. At this point Faraja told us why you must climb to the summit at night, there are three reasons: 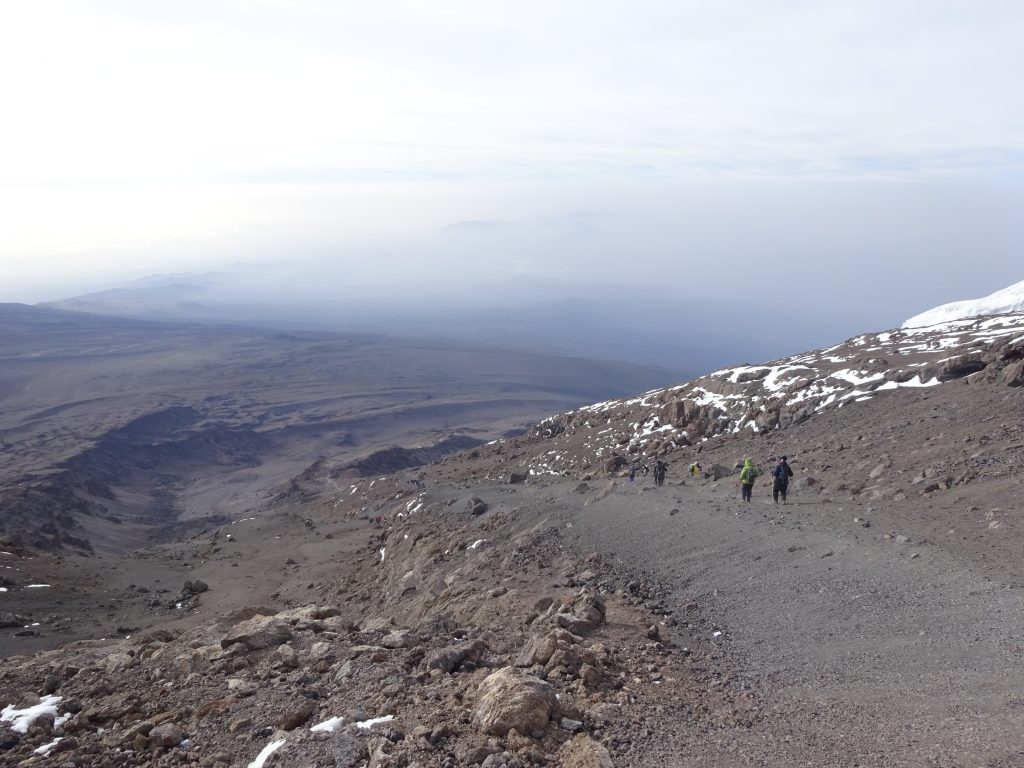 When Barafu Camp came back into view, Dave once again got a burst of energy. He bounded off, down the scree, scree running to perfection. Tim followed him so that he wasn’t alone. I stayed with the rest of the group.

Me and Jo arrived at the camp sometime after Dave and Tim. I went straight to my tent as I could see Dave’s legs sticking out – he’d fallen asleep! He woke up as I got to the tent and soon after the cook brought some fruit juice for me – Dave had already had his! 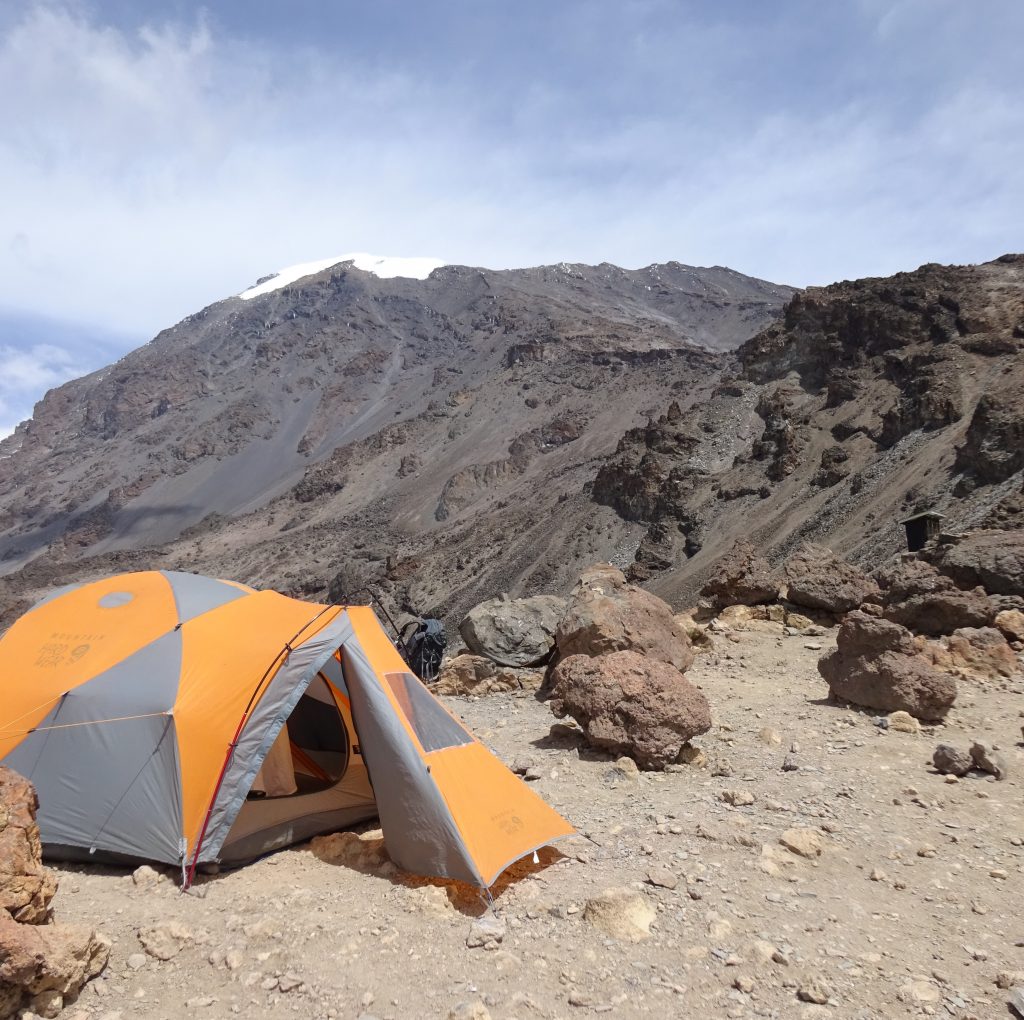 Back At Barafu Camp – Looking Back At The Peak

After all the group was back we were called into the communal tent for lunch. I didn’t realise how hungry I was until I started eating! Rice and stew has never tasted so good!

After lunch Faraja came into the tent to tell us the plan. He told us that we would now have a few hours rest. He advised us to sleep and we would be woken to start our descent. So we all headed to our tents.

Here me and Dave had a surprise – there was a mouse in our tent! We had to get all our gear out so that we could try to herd it out. Some of the porters and the cook came over to see what we were doing and helped. The cook managed to scoop the mouse into his hands and it jumped out of his hands and out of the tent.

I thought I wouldn’t be able to sleep. It was brilliant sunshine. But exhaustion overtook me and I was asleep in moments!

Read about the beginning of the descent – Day 7 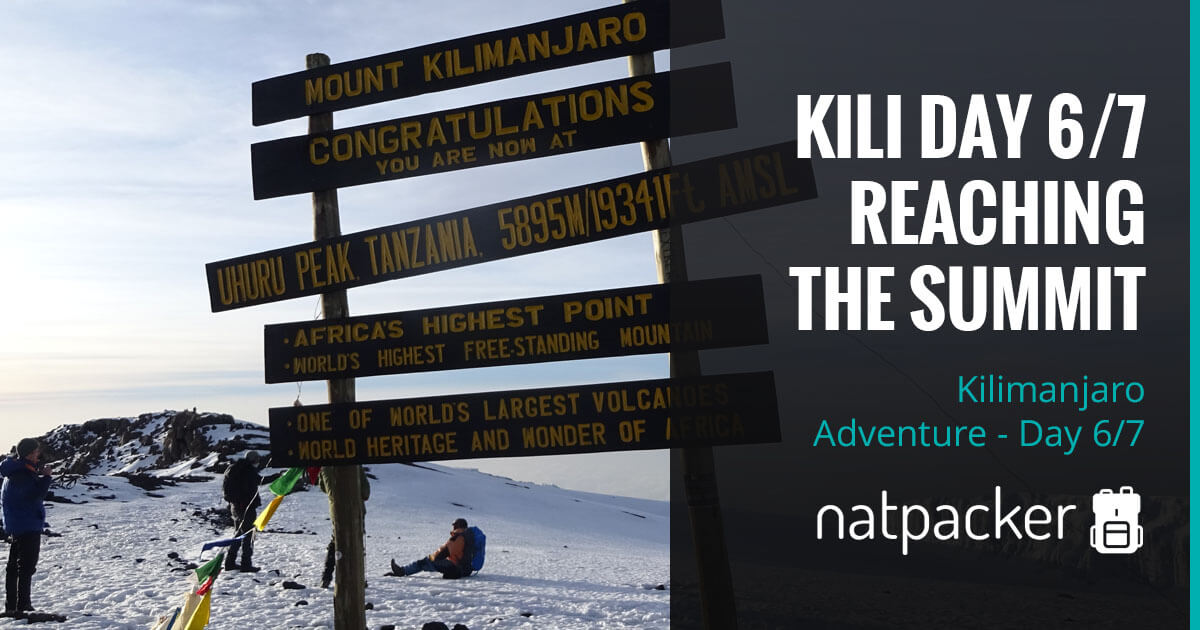