Dia De Muertos is one of Mexico’s festivals most well known festivals. Mexicans and tourists alike travel to see some of the best celebrations.

On Dia de Muertos, the normally sleepy town of Patzcuaro sees an influx of tourists. The reason? To witness the celebrations on a little island on Lago de Patzcuaro. The tiny conical shaped island of Janitzio is completely pedestrianized and it becomes so crowded that you can barely move on the 1st November every year.

The Day of the Dead is celebrated from the 1st to 2nd November every year. Although originally this festival originated in the states of Oaxaca, Michoacan and Jalisco, it is now an official holiday country-wide. It has also recently changed with the additions of parades, especially in Mexico City. These parades have started thanks to a certain James Bond film that featured a Day of the Dead parade (which had never been done here before the film). 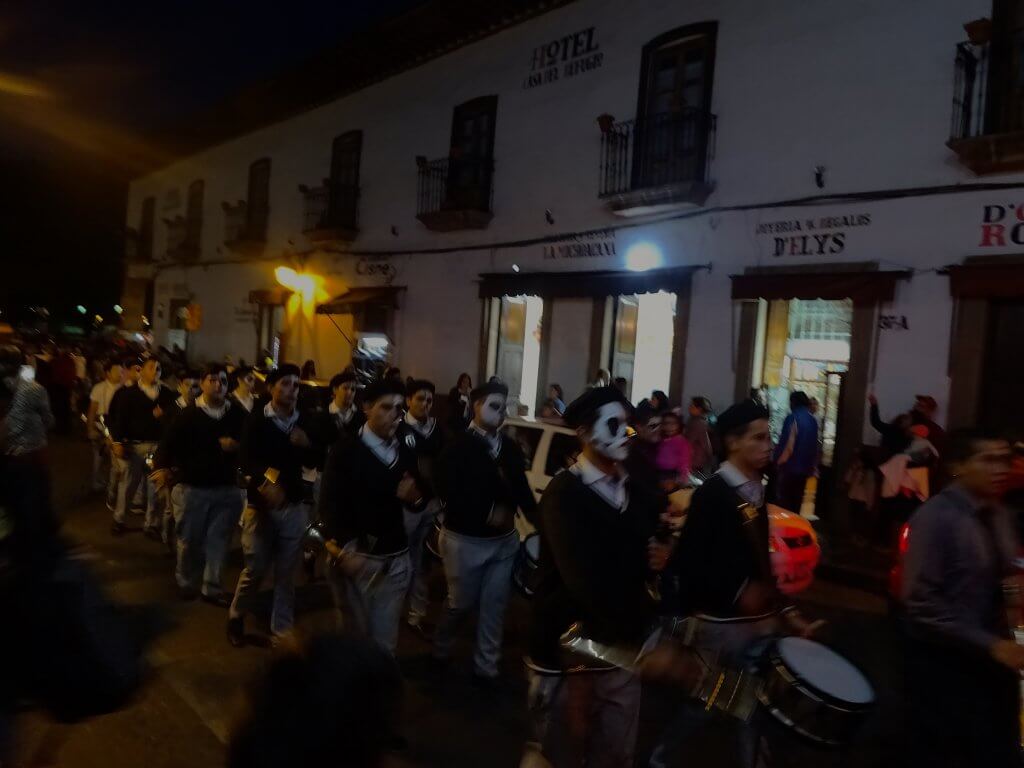 Mexicans do not see death as the end, but as a continuation of life. On the night of the 1st of November loved ones’ souls (muertitos) return to the land of the living. Therefore Mexicans hold a nightly vigil over the graves of their loved ones until dawn. There are silent times and times of chanting and singing, as they wait for dawn. The symbols used show a mix of old native beliefs and more modern Christian beliefs.

Altars are made at home and at the graves of the deceased. In the Lake Patzcuaro area, some indigenous beliefs have seeped through into the altars. For example, they include the four elements of Water, Fire, Earth and Air. 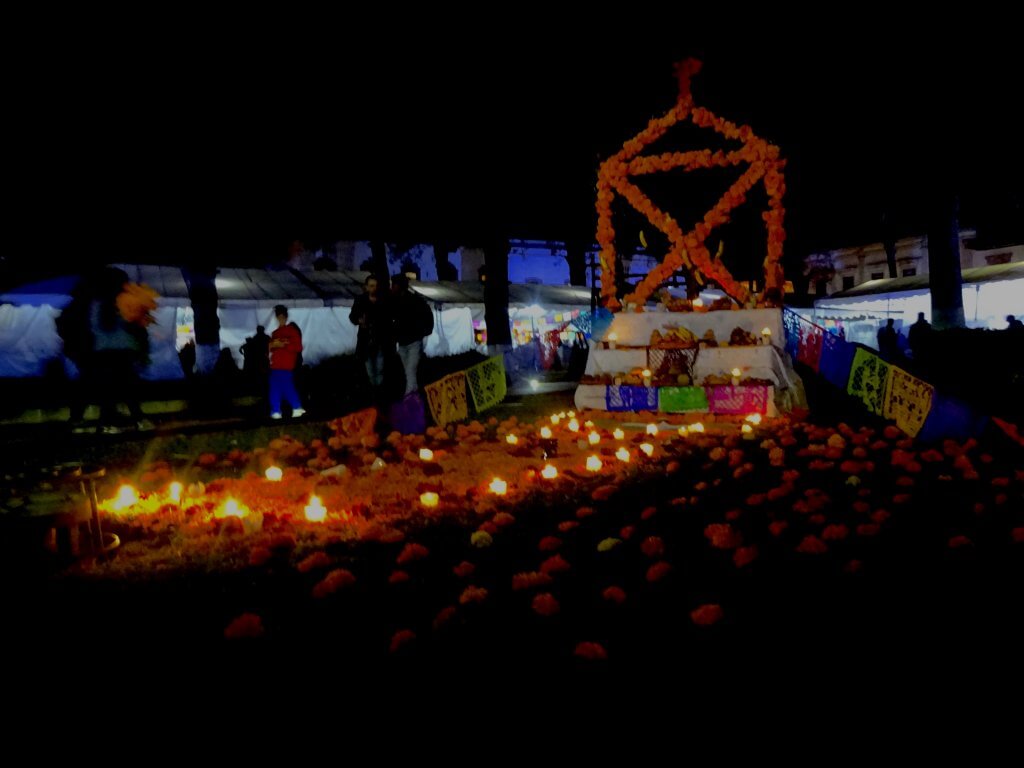 Altar In The Centre Of Patzcuaro

Water is represented by a bowl of water (where the spirits can drink from, as they’ll be thirsty after their long journey back to our world).

Earth is represented by symbols of harvest, such as corn.

Air is shown in cut paper (picasdos) that decorate the altar and flutter in the wind.

Fire is shown in the burning candles that are replaced throughout the night as the burn down. The candles are also a symbol of hope and guide the dead back to the world of the living. Local Lighting Candles To Guide Her Loved Ones To The Grave

There are also other important aspects of the altars. Some will have two levels, to represent heaven and earth. Mexican Marigolds and other flowers are placed around the altar as their vibrant scent and colour help to guide the spirits. Mexican Marigolds were also used in Aztec funeral rites and flowers in general symbolise the fragility of life. There is woven matt placed at the grave, so that the weary souls can rest after their long journey.

The favourite foods and drinks of the deceased are also placed at the altar, as well as calaveras (sugar skulls) and pan de muerto (bread of the dead). Pan de muerto has a distinct buttery flavour and has a circular lump and ridges on top (and is delicious). The lump represents a head and the ridges arms – although these taste no different from the rest of the bread these are the most fought over.. The bread can be plain, which is traditional, or filled with cream. 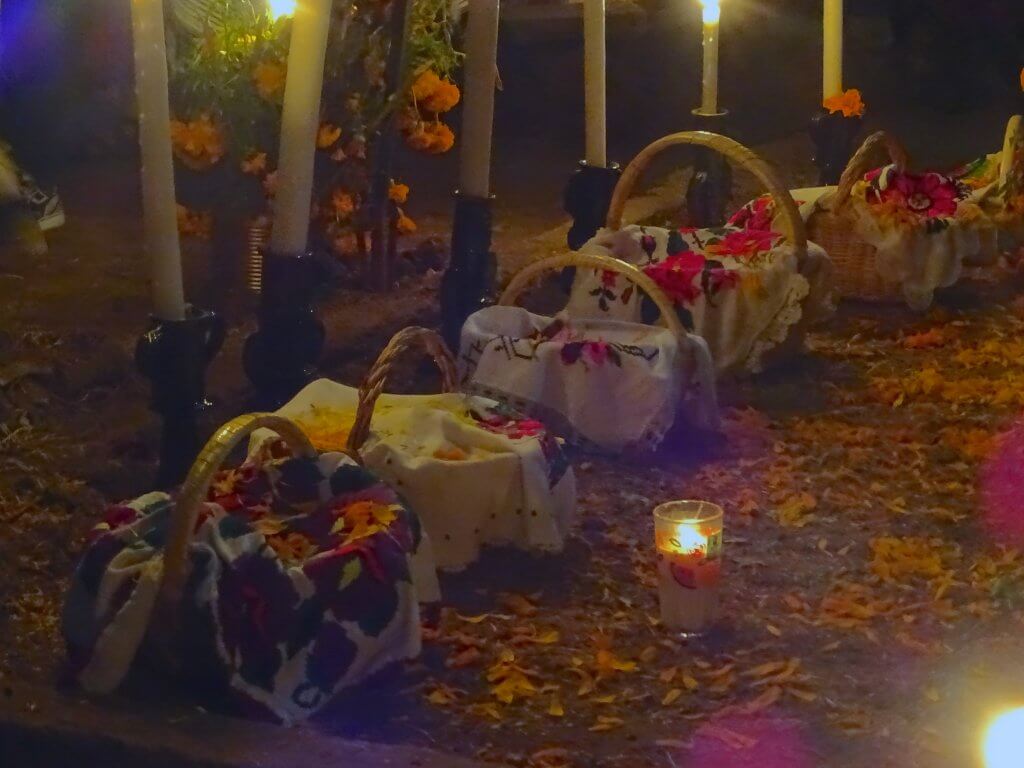 Food Offerings For The Deceased 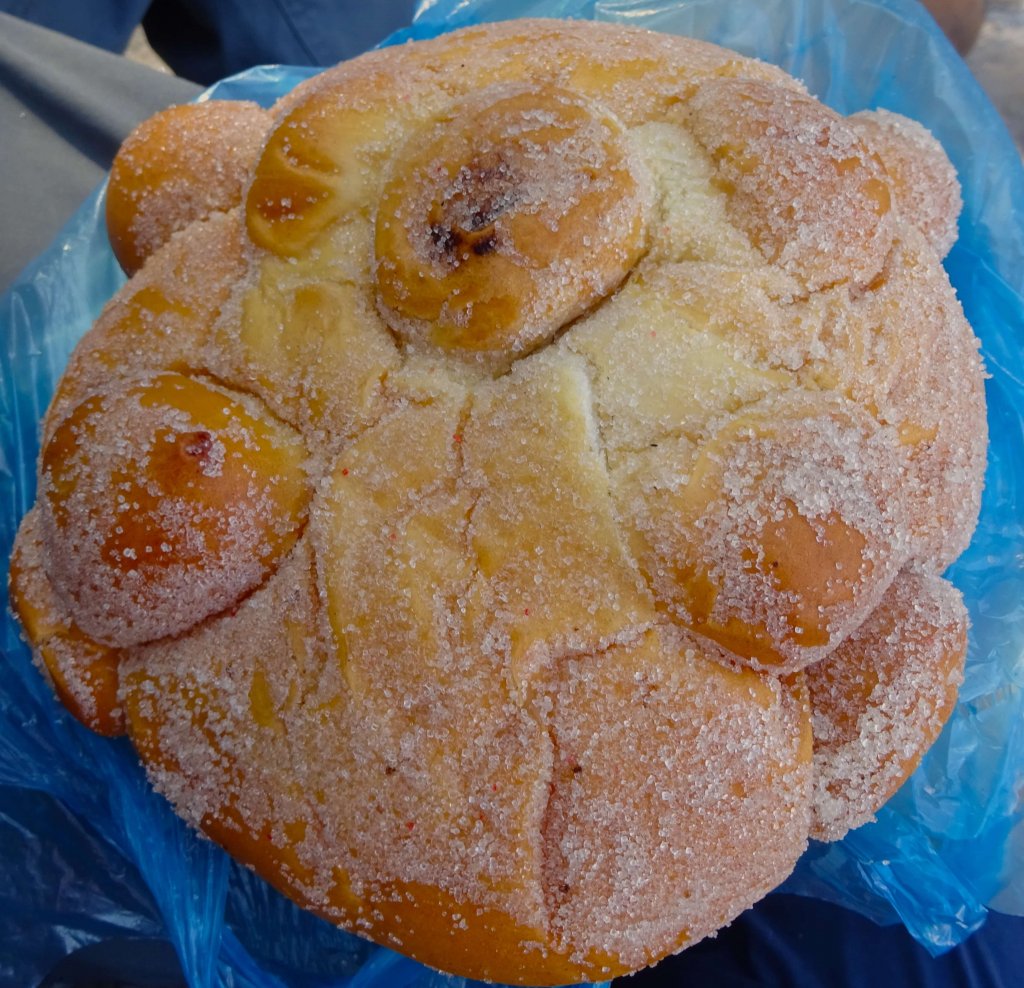 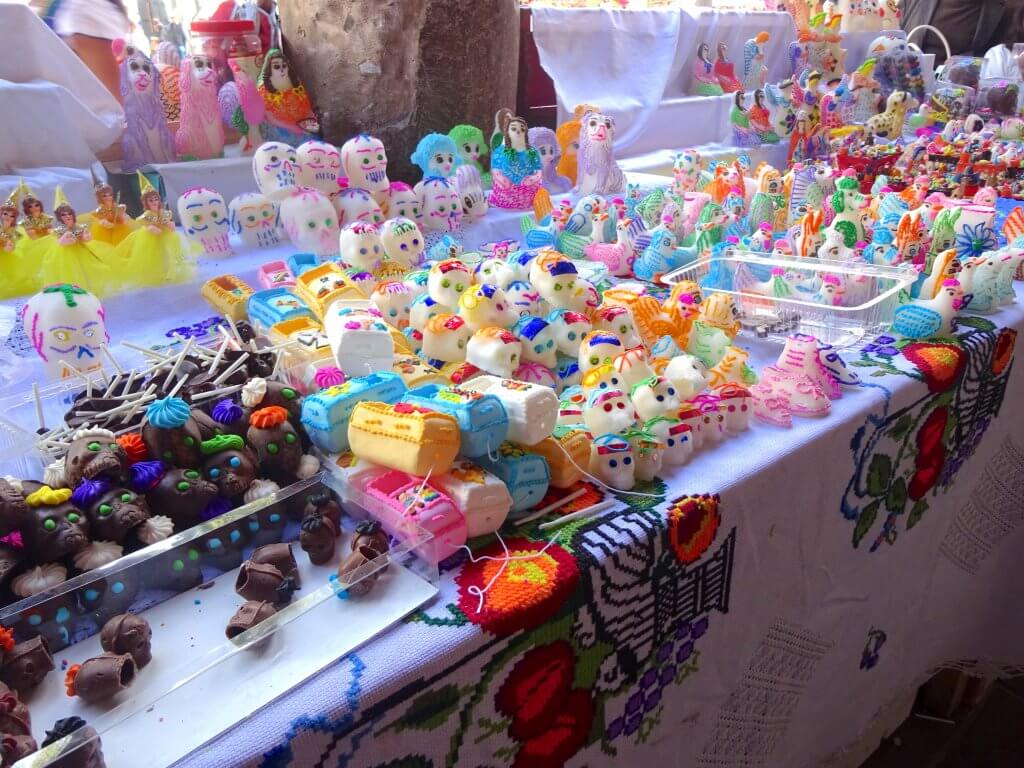 Day Of The Dead On Janitzio

It could be said that the hordes of spectators that head to the tiny island of Janitzio now ruin the effect of the celebrations, but it’s still a moving sight to see. There is just one small cemetery on the island. In the early evening the locals from surrounding areas canoe over to the island, with a single candle at each bow, a moving sight. 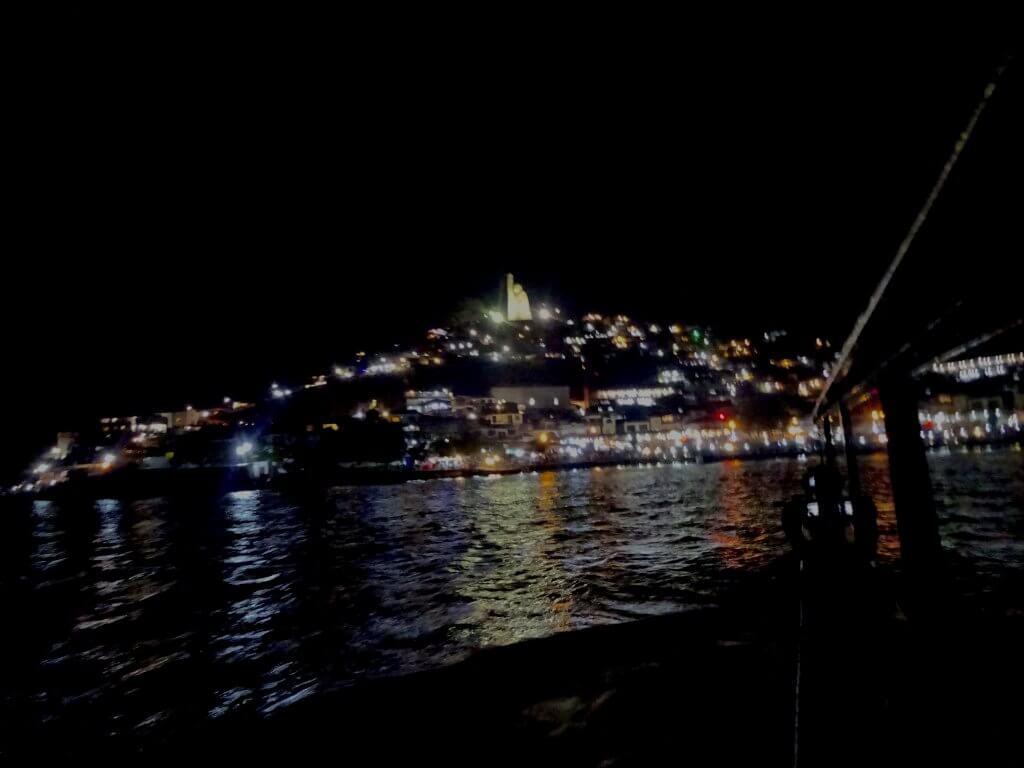 The Island Of Janitzio From The Boat

At the top of the conical shaped island, around the statue of José María Morelos, is one big party. Food stalls, bars and more are erected around here. This is where a lot of the younger tourists spend the night – many don’t bother with accommodation, but simply bring their bags and don’t plan to sleep. You can also climb the statue – when it’s crowded it takes hours as it is a continual queue, but the view is worth it.

The Statue Of José María Morelos

The Queue To Climb The Statue José María Morelos

The View From The Top Of José María Morelos

The graveyard itself is a riot of orange. Mexican marigolds are everywhere, on every altar on every grave. If you get there before 10pm, you will be with a few tour groups meandering around the cemetery; it is crowded but not unbearable. 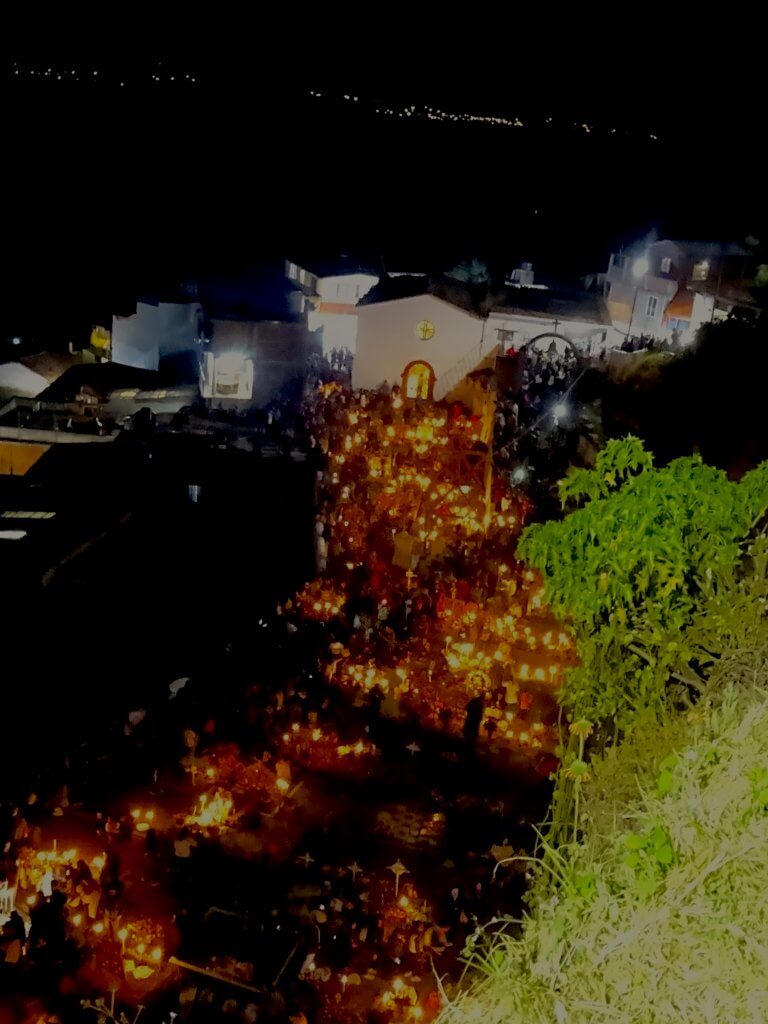 The Graveyard On Janitzio

Personally, I’d say avoid the cemetery between 10pm and 3am, as the graveyard at this point is so crowded you can’t move. You have to slowly shuffle forward with the crowd. The worst part about this time is the amount of drunken people that have wandered down from the party. They’re loud and disrespectful. I saw plenty leave their rubbish everywhere and trample over graves and altars to get some space.

Obviously, not all drunk people were like this, but these are the ones that I remembered. It was so shocking to see.

The best time for the graveyard is after about 4am. It’s much quieter, but not too sombre. It’s peaceful and you can find somewhere to sit to watch the locals keep their vigil. Many are happy to try and talk to you (even with a language barrier). It’s so quiet at this time, to me it felt like this is what I had come to see. 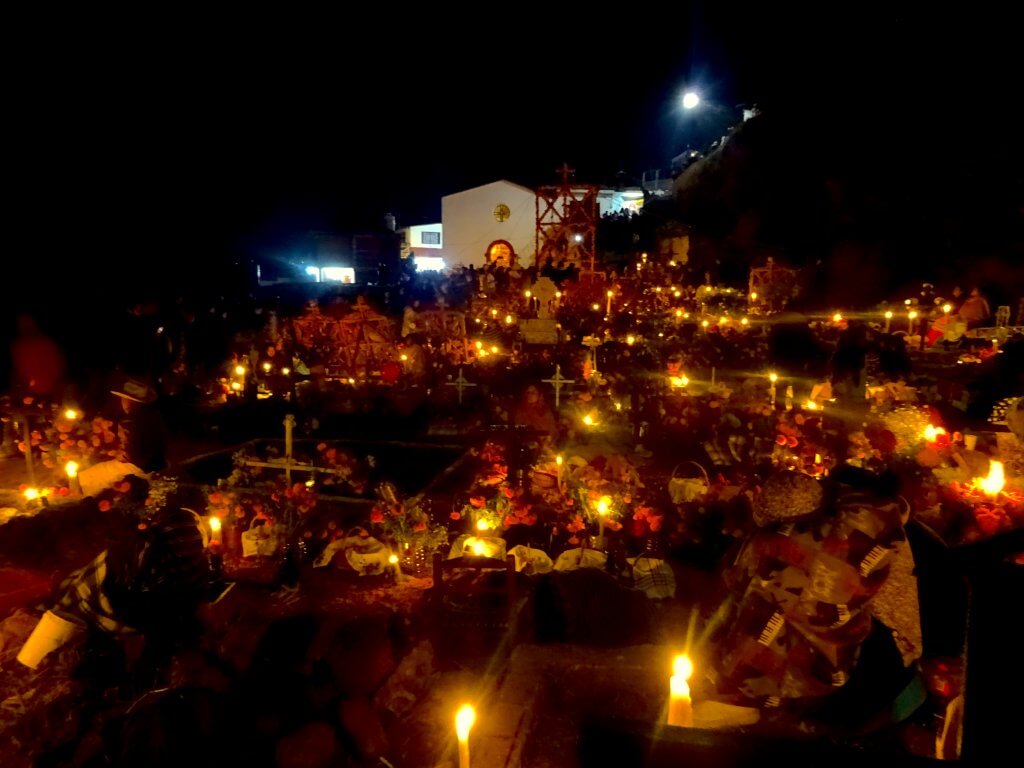 The Graveyard On Dia De Muertos 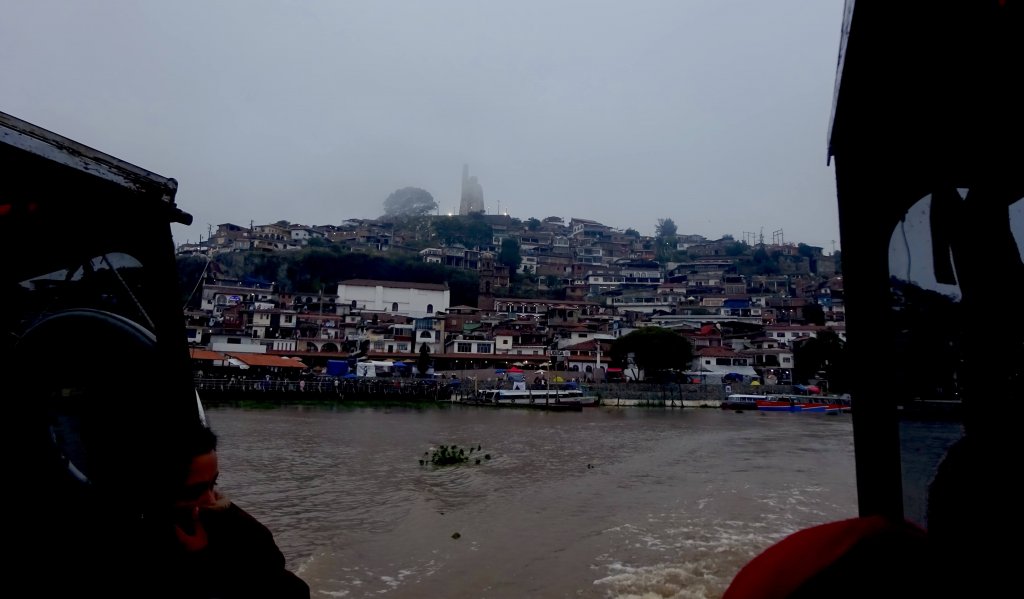 Leaving Janitzio In The Early Morning

Patzcuaro and Janitzio are not popular tourist destinations, so information can be hard to come by. Here are my tips for ensuring you have a good time: 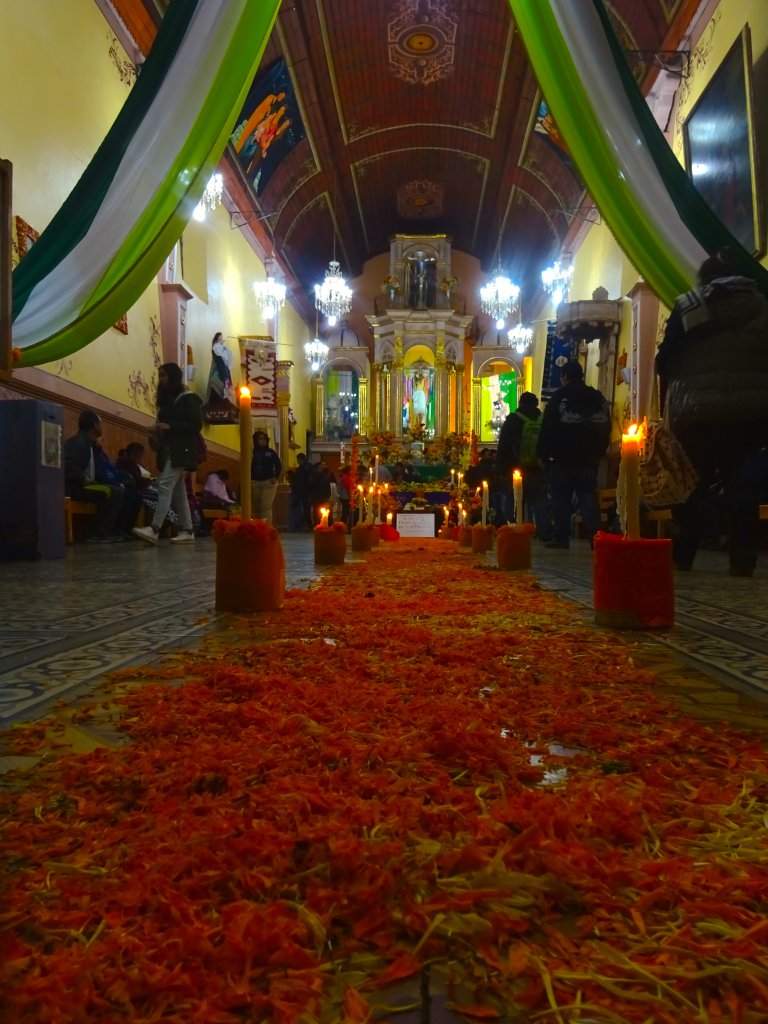 Inside One Of The Churches On Janitzio