Amsterdam is a popular destination and so there is plenty of accommodation to choose from. However, when there are so many hotels, hostels and more, it can be hard to find a decent place to stay. You want value for money, a decent location and clean facilities, right? It can be difficult to find this in such a popular destination. Personally, I found that the Lloyd Hotel in Amsterdam fit the bill.

I stayed in the Lloyd Hotel (Amsterdam) for 3 nights. The hotel boasts that they have rooms for all budgets and all their rooms are unique. I was in one of the budget rooms.

Disclaimer: I was given a discounted Influencer rate for my stay, in exchange for an honest and unbiased review. All opinions are therefore my own.

About The Lloyd Hotel Amsterdam

The Lloyd Hotel is located in East Amsterdam, near the banks of the river IJ. There are 117 rooms, each one is unique and suits different budgets. It is the first hotel to have rooms that range from 1-5 stars. 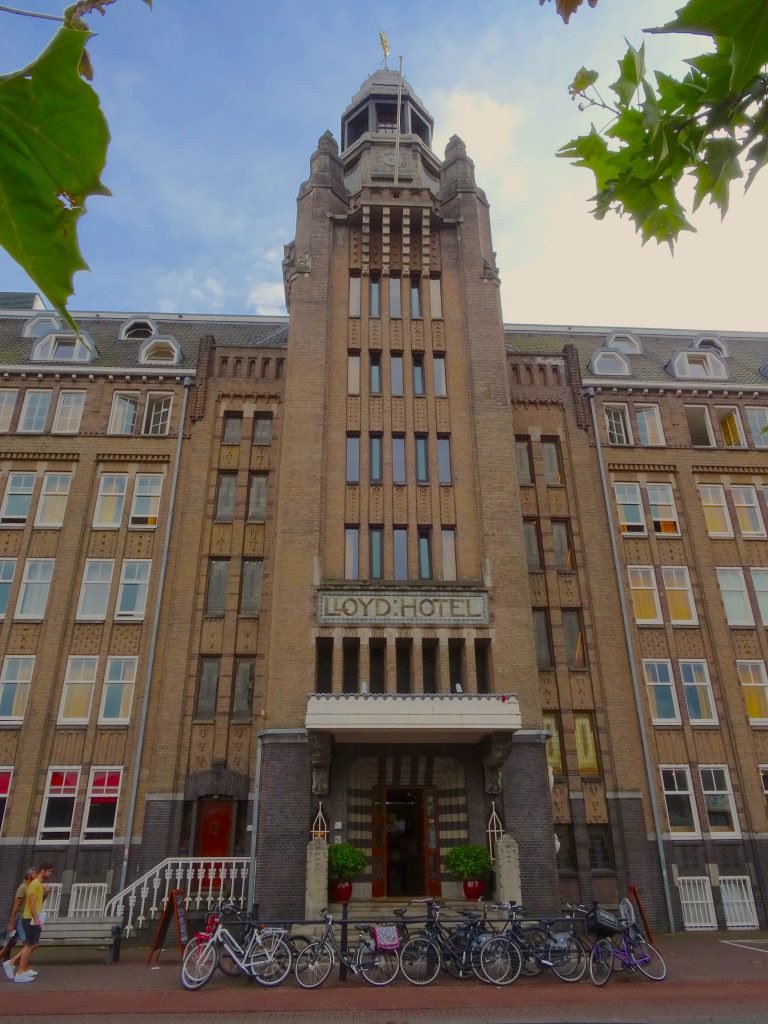 The Historic Lloyd Hotel In Amsterdam

The historic building was opened in 1921. It was designed by architect Evert Breman, with a mixture of architectural styles. At first, the building was used as a hotel for emigrants, the hotel was then called the Royal Lloyd Hotel. Large numbers of Eastern Europeans stayed here on their way to South America.

The hotel, unfortunately, went bankrupt in 1935 and the Municipality of Amsterdam used the building. Over the years the building had many different functions: a shelter for refugees, a German prison, a detention centre and artists studios.

In 2004 the building reopened as the Lloyd Hotel. All the rooms are uniquely designed, with a Dutch focus. Within the hotel, there is also a restaurant and out on the terrace, a bar can be found.

My Review Of The Lloyd Hotel

During my three-night stay, I was in a twin room on the top floor. The bathrooms for this room were shared and I was not far from the toilet and shower facilities. 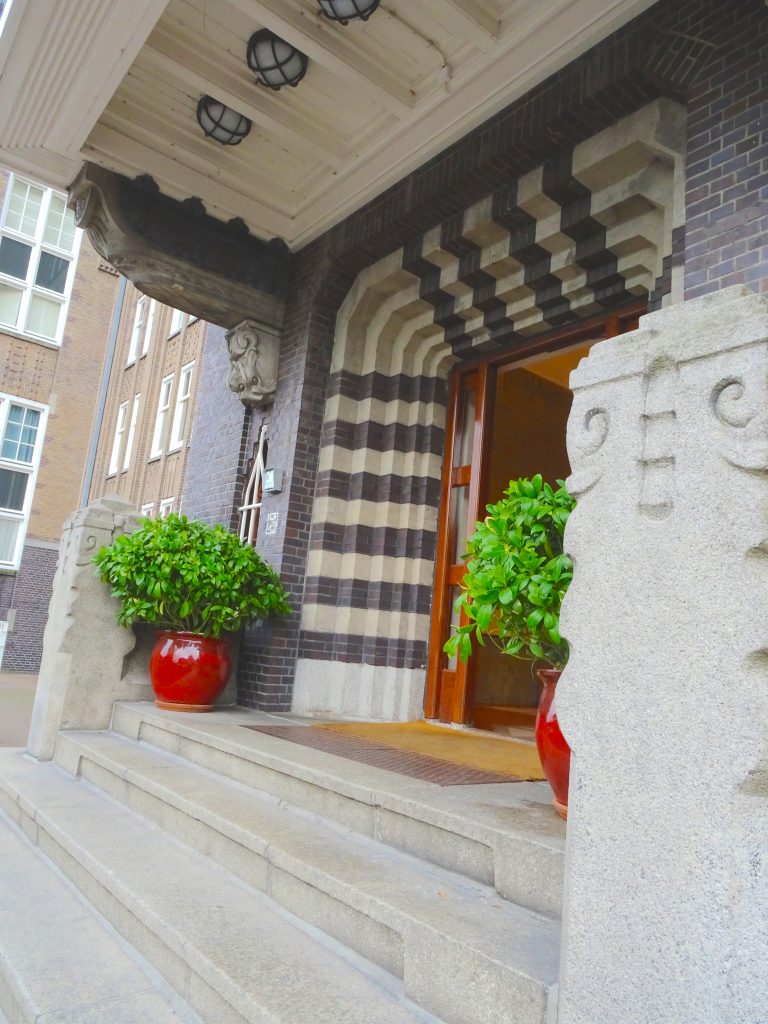 The Entrance To The Lloyd Hotel

Lloyd Hotel was easy to find. It was possible to walk from the main train station and is actually quite a nice walk along the river. The walk took me about 30 minutes. Walking to the city centre took a little longer, about 40 minutes. Being out of the city centre, the area is quiet.

But for those that don’t want to walk, right behind the hotel is a tram stop. At this tram stop you can go in any of four directions, so you can pretty much get anywhere in the city from here. Though for places like Dam Square you will have to change at the main station. If you have an I amsterdam city card, using transport becomes a little addictive. 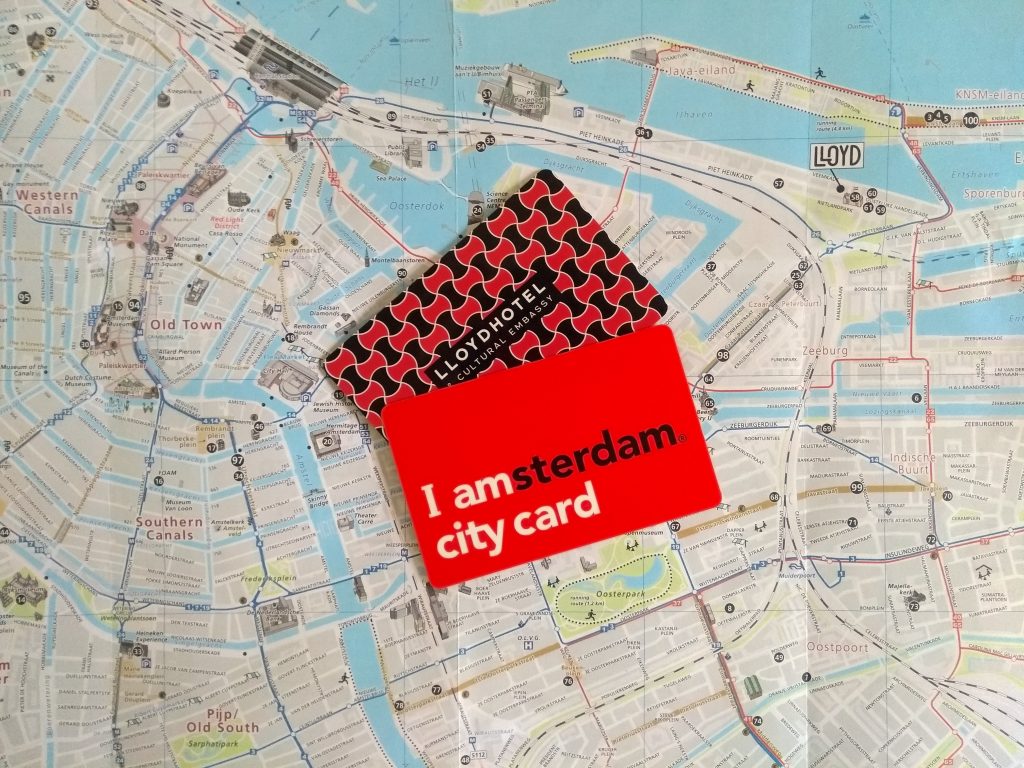 Upon my arrival at Lloyd Hotel, I was given a map of Amsterdam, as well as lots of advice on what to see and do.

My room was larger than I expected. The room was quirky, with a sloped ceiling, beds on either side and a desk. Towels were provided, plus toiletries and even a dressing gown – a bit of luxury I am not used to at the prices I go for! The room was light, airy and, most importantly, clean. Oh, and the WiFi was very good, fast and was strong in my room. 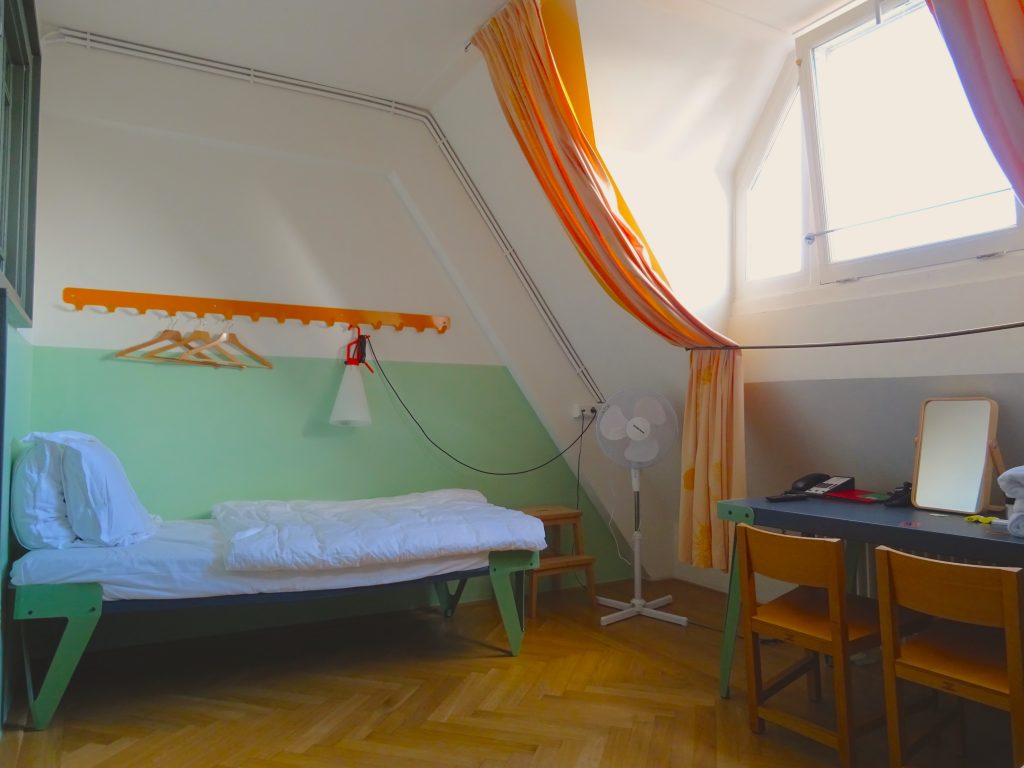 My Budget Twin Room At The Lloyd Hotel 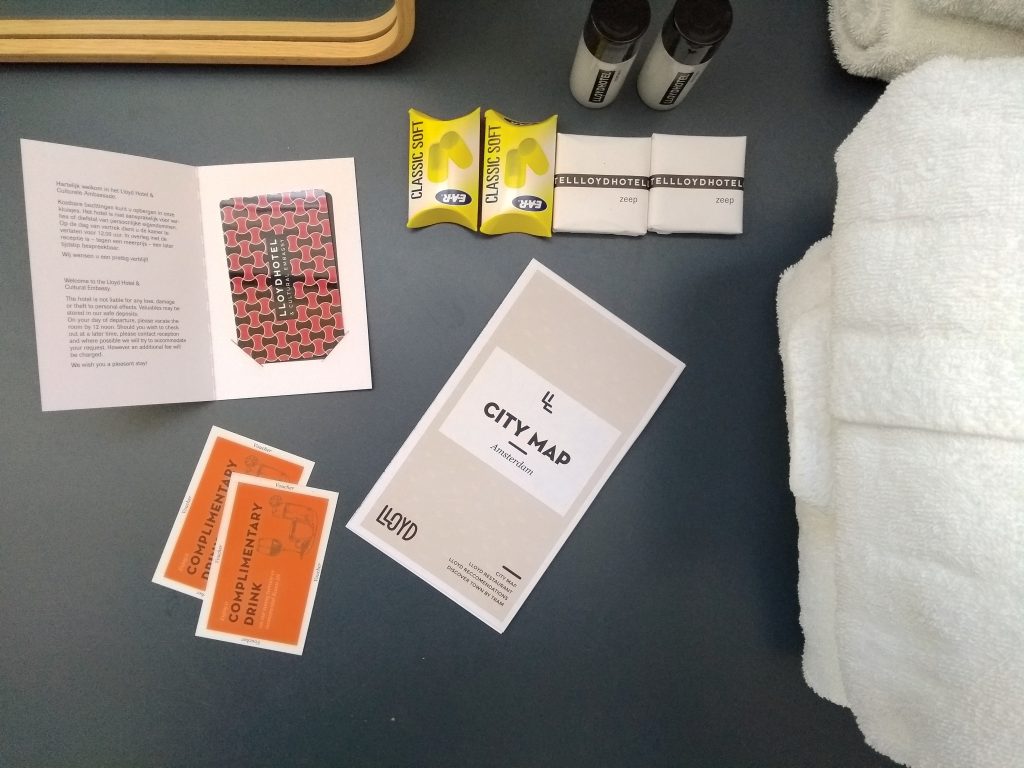 The Provided City Map And Toiletries

Every part of the hotel I saw was spotless, as well as quirky. There was a lounge that I discovered as I was leaving, and wish I’d had time to, well, lounge in there.

Being a hotel, there was no kitchen, but breakfast was provided, at a small extra cost. The breakfast was buffet style and there was plenty to choose from. You can also eat as much as you want. 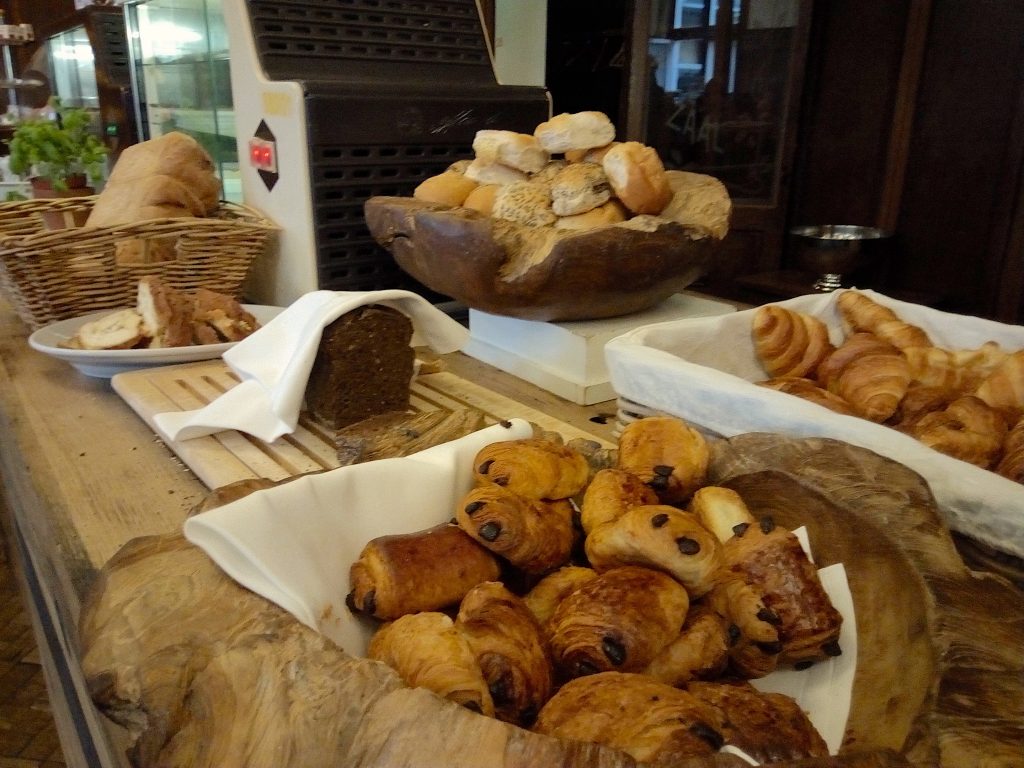 Some Of The Breakfast Buffet 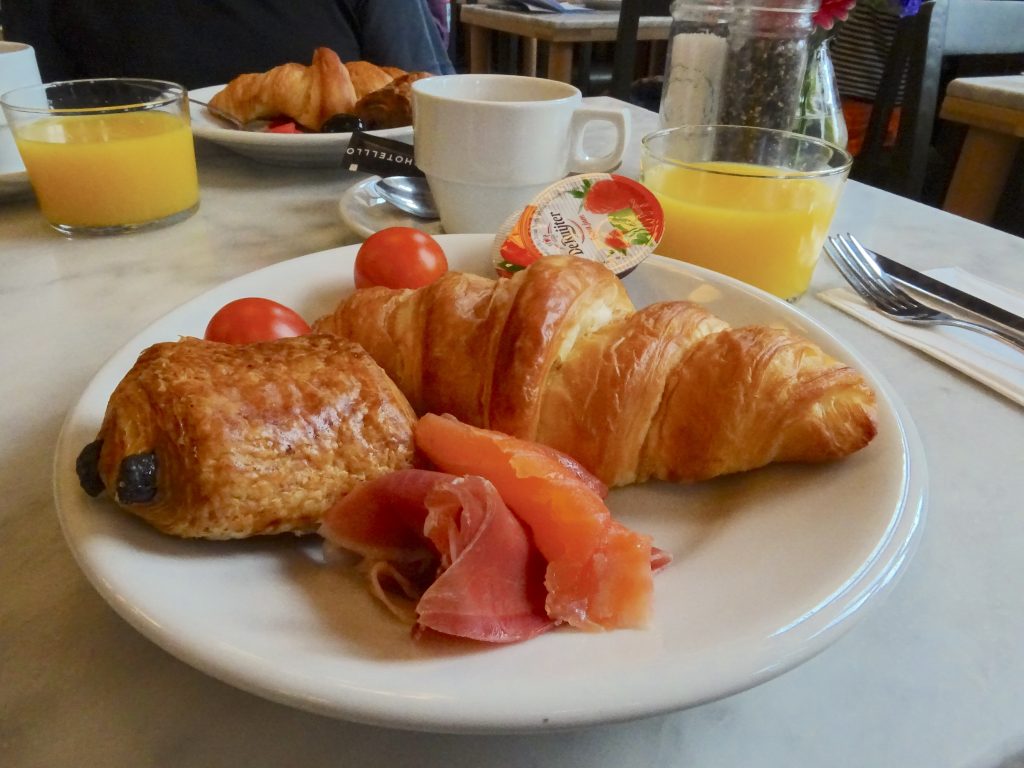 My Breakfast One Morning

Unfortunately, I did not have a chance to try the restaurant, But the prices looked cheap enough. I did try the outside terrace (and bar). The terrace was nice, lovely and warm in the summer that I was there.

When I checked out I had a late flight, so I was very happy that there was a free luggage storage facility.

I could not say a bad word about the staff. They were helpful with every question I had, always friendly, what more could you want?

They obviously kept the place spotless, or there were some magical cleaning piskies about the place. Either works for me!

Out on the terrace, the staff were quick to take mine and Dave’s drinks order. And it didn’t take long for the drinks to come either. 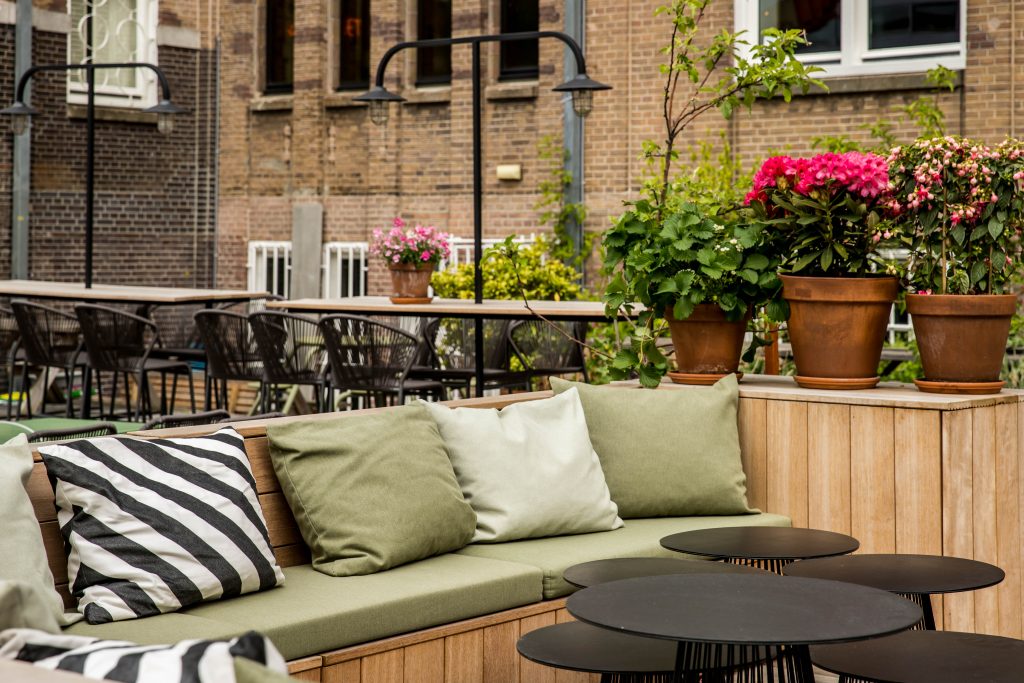 The Terrace At Lloyd Hotel

So the staff were quick, efficient, helpful and friendly. I could ask for nothing more.

Well, with all the above being 5/5, how could I not score Lloyd Hotel Amsterdam the top score? Great location, in a quiet spot but easy to get to the centre on foot or via public transport. The budget room I had was spacious, quirky and lovely. Staff were friendly and the hotel spotless. And let’s not forget the massive breakfast.

So if you’re looking for somewhere to stay in Amsterdam, I’d say check out this quirky hotel.

You can check out more reviews of the Lloyd Hotel on TripAdvisor. 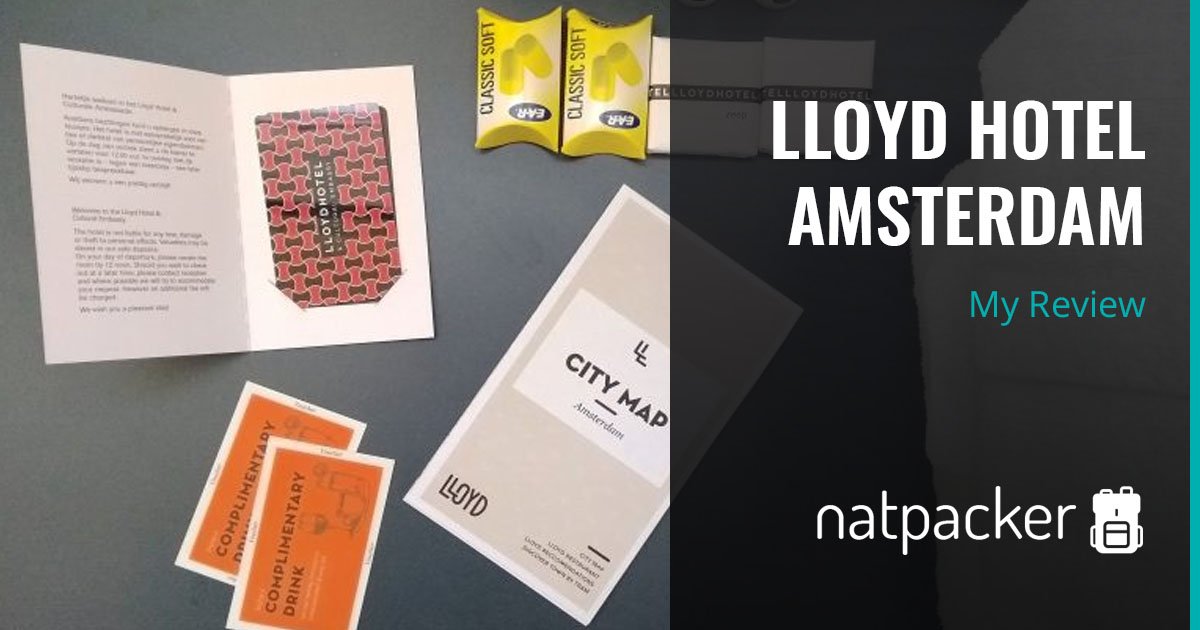