This is the first part of the London Adventure – A Long Weekend And A Reunion. Here I will tell the tale of searching for the BFG Dream Jars. There are four parts to this adventure in total, I hope you enjoy the read! So let’s get started!

The Journey Down And My First Airbnb Experience

Me and Dave had booked a late afternoon/early evening train down to London on the Thursday. This meant that I would meet Dave at the station when he finished work. We met at the station, collected our tickets and headed to the train.

Our seats were on a table with two other guys. After half an hour or so we started chatting. The guys both lived in London and had been up North for work. We quickly used this and started asking them where we should go and what we should do! Talking to locals is the easiest way to find places! They told us to head to Borough Market, amongst other places that I can’t remember!

There was then an announcement that the train was delayed for about half an hour. So we got the drinks in and carried on chatting! One of my favourite parts of travelling, meeting new people!

When the train arrived at Euston we said our goodbyes and headed out to London. We had wanted to walk to the Airbnb that we had booked, which was on the South of the Thames. When we had suggested this to our host he was against it, which made us more determined to walk! However as we were walking we realised that the walk would take a little under two hours and that the host would be waiting for us, so it wasn’t fair if he had plans. We were being unfair. So we got on the next tube we saw and headed to the Bermondsey station.

Luckily we were only about half an hour later than he expected us. We texted him when we were getting on the tube so he was there when we got off.

It was a short walk from the station to the airbnb. Once up the stairs and in the flat our host told us that there was a ‘no shoe’ policy showed us the areas we can use and, of course, our room. He showed us the breakfast stuff for the morning and we also met his flatmate.

My first airbnb experience felt a little weird at first, to be honest. But that was probably just me! The view from the bedroom was amazing (especially for the price). Although with only one bathroom between the hosts and guests I did feel that a £15 cleaning charge was a bit much! Don’t really understand how much more cleaning our presence would make them do, yes I understand changing the sheets and hoovering the bedroom, but that £15 will go a long way there!

View From The Airbnb

After the short tour we dumped our bags down and headed out to complete a Dream Jar trail!

The Quest For The BFG Dream Jars

I had been obsessed with the BFG Dream Jars ever since I heard of them. I was going to see some! I love the BFG so the Dream Jars just seemed like a great idea. And when I realised they’d still be there when we went to London there was no way I wasn’t completing at least one trail!

We decided to do a trial before grabbing food, as we weren’t that hungry. The nearest trial was the ‘Gloriumptous River Trail’. So we walked along the ‘Thames Walk’ nearby which headed towards Tower Bridge and the start of the trail.

Once we got to Tower Bridge, we decided to walk across it and back first, see the views. There are some really good views from the bridge, just be careful not to walk into other sightseers taking pictures! Back on the south of the river it was time to begin the quest! The first Dream Jar to be found was ‘For The Love Of The Hedgehog’ by Zeolla at More London. It was essentially a sculpture of a hedgehog with autumn leaves. Zeolla is a youtube sensation who has always loved hedgehogs and ‘has a dream where she is working in a hedgehog sanctuary’. 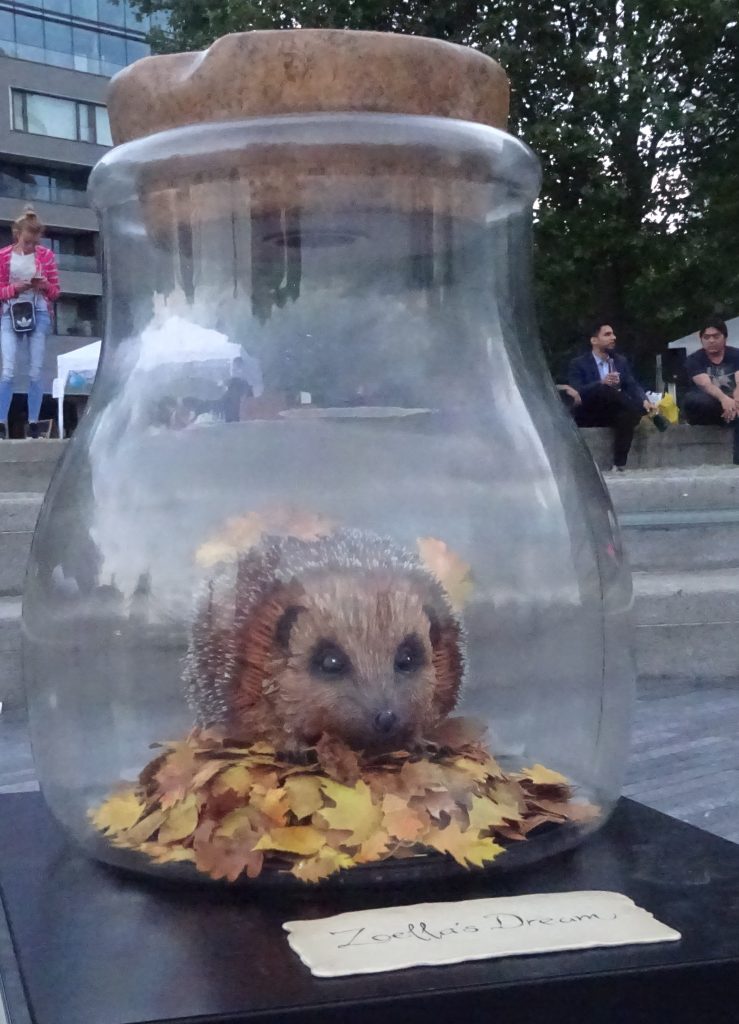 ‘For The Love Of The Hedgehog’ Dream Jar

I was a little over-excited on spotting the first jar and literally ran to it! Unfortunately some children were also playing on it… I was very shocked when they started banging on it and the parents didn’t bat an eyelid!

The next Jar was ‘The Open Dream’ which we had difficulty finding. The map that Dave had printed wasn’t very clear! After a bit of to-ing and fro-ing we finally found the jar at the Scoop near City Hall. This Jar is the dream of Justin Rose and the sculpture is of a golf ball, a golf club and a trophy. The champion golfer dreams of winning the Claret Jug. Personally, I felt this was a little disappointing as the dream was for himself and not for others. 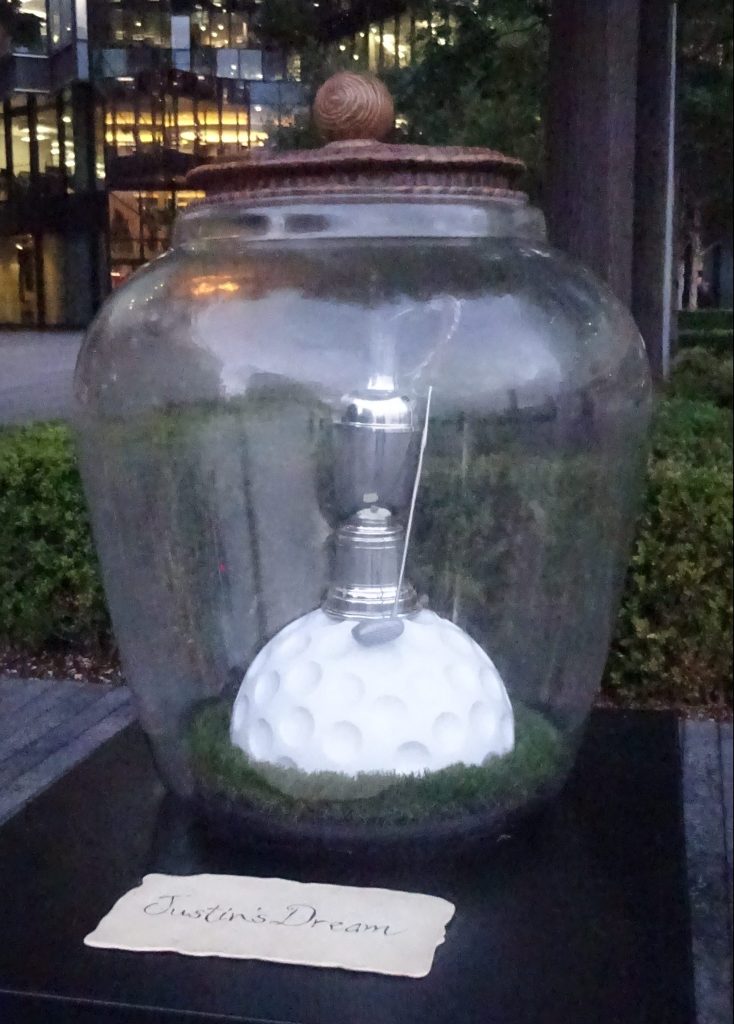 We next headed towards Hays Galleria to find the next Jar. This Jar was easier to find, on London Bridge Pier. The Jar was ‘Healthy Start, Happier Lives’ which is the dream of RB (which is a leader in Health and Hygiene). The Jar shows a pair of hands holding what looks like a bar of soap and four mini sculptures above it, one of which is a globe. RB want to prevent, treat and control diarrhea, removing the illness for the top five causes of death in children. 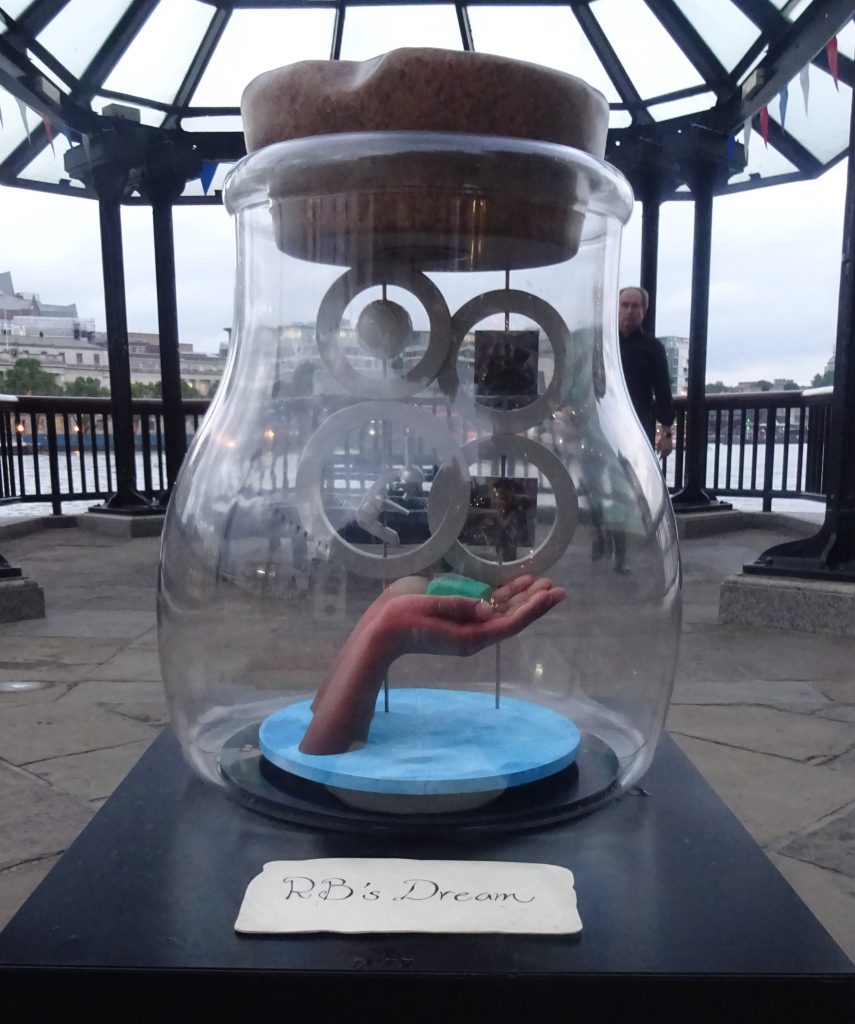 At this point we were getting a little hungry – the quest was taking longer than we planned! But we decided to push on and finish the quest first! After admiring the views from the pier we headed into Hays Galleria, as there were pretty lights inside, so we were drawn in! 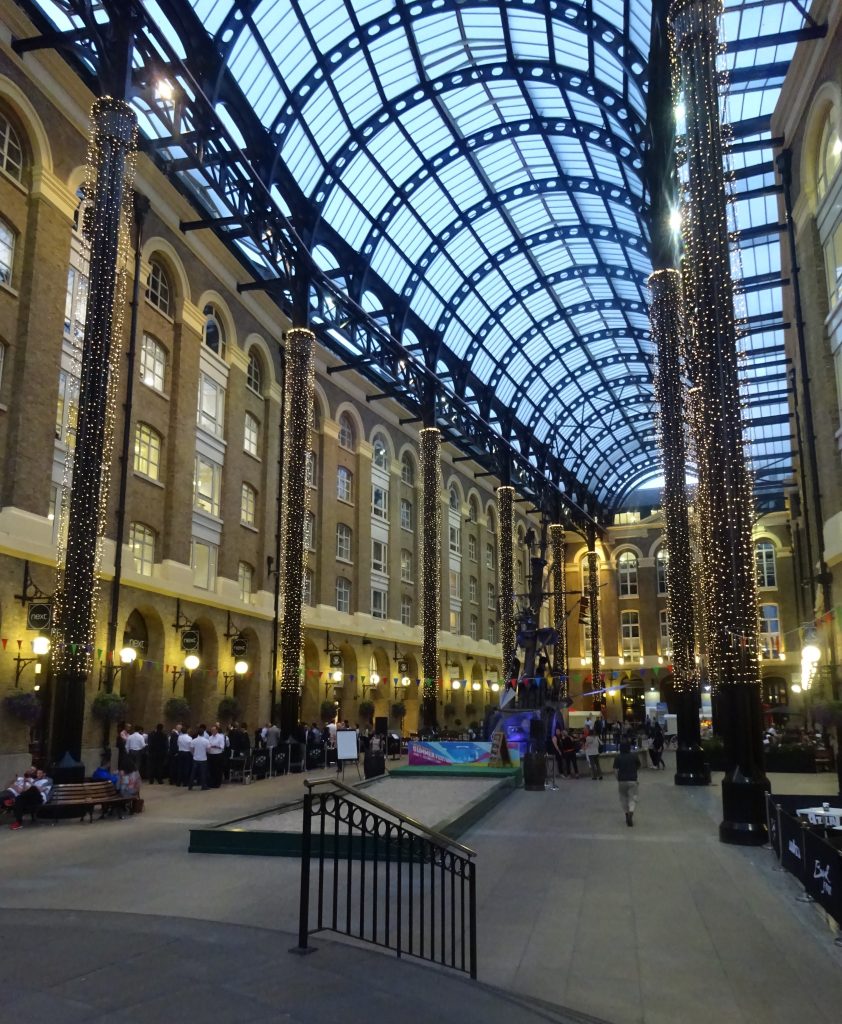 After this minor distraction we made our way to the next jar. On the map this looked like it was in London Bridge Station. It wasn’t. This was probably the one that we had the most difficulty finding, but if we’d have read the location on the list it would’ve been easy! We even asked a few of the staff at the tube station (one of which had no idea what we were on about and probably thought we were made). Finally we actually read the location and it said ‘The View From The Shard’ we had gone past the entrance to this at least twice! So we went back and I’m fairly sure the guy at the entrance had watched us go past him several times and so knew exactly what we were looking for and had a good giggle at our failure!

So we finally found the fourth jar! ‘Up, Up And Away’ Niall Horans dream. Inside the jar is a sculpture of a hot air balloon taking off. Niall Horans is part of One Direction and the jar shows his dream of having a date with a girl in a hot air balloon. I really like this jar until I realised the meaning, once again a little disappointed with a celebrity thinking of themselves and not others…. 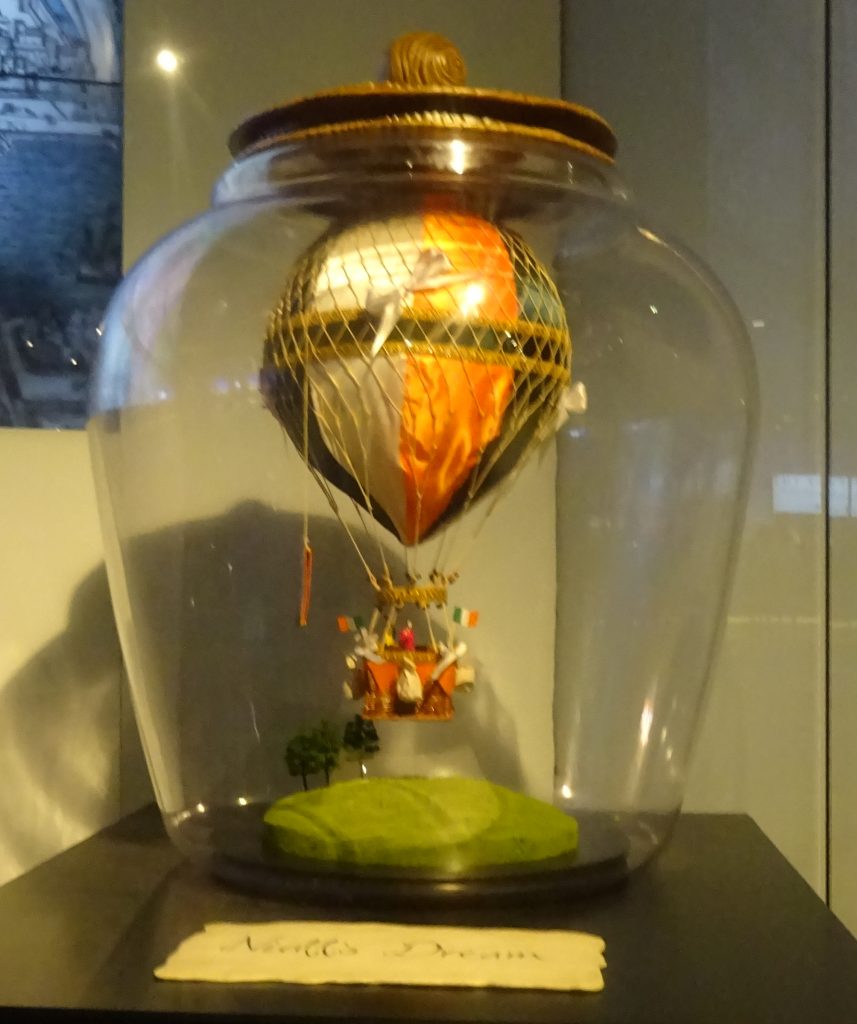 ‘Up, Up And Away’ Dream Jar

We knew (this time we read the location) that the next and final Dream Jar was at the Globe, so instead of following the trail exactly we headed off back to the river to follow it to the theatre. Here i made a mistake, I followed Dave. For some reason he decided it would be quicker to cross London Bridge and go along the north bank to the next bridge and cross again. I was just happy walking around and so let him lead the way (which was definitely the long way round)!

We finally got to the final Dream Jar, which was also one of my favourites, maybe even favourite. This jar was called ‘Safe’. Inside the jar is a little girl with a teddy bear, the whole jar is held in a hand. This jar is the dream of Ryan McElhinney, who is an artist. His dream is of protecting his young niece and the preciousness of all children. Love it. 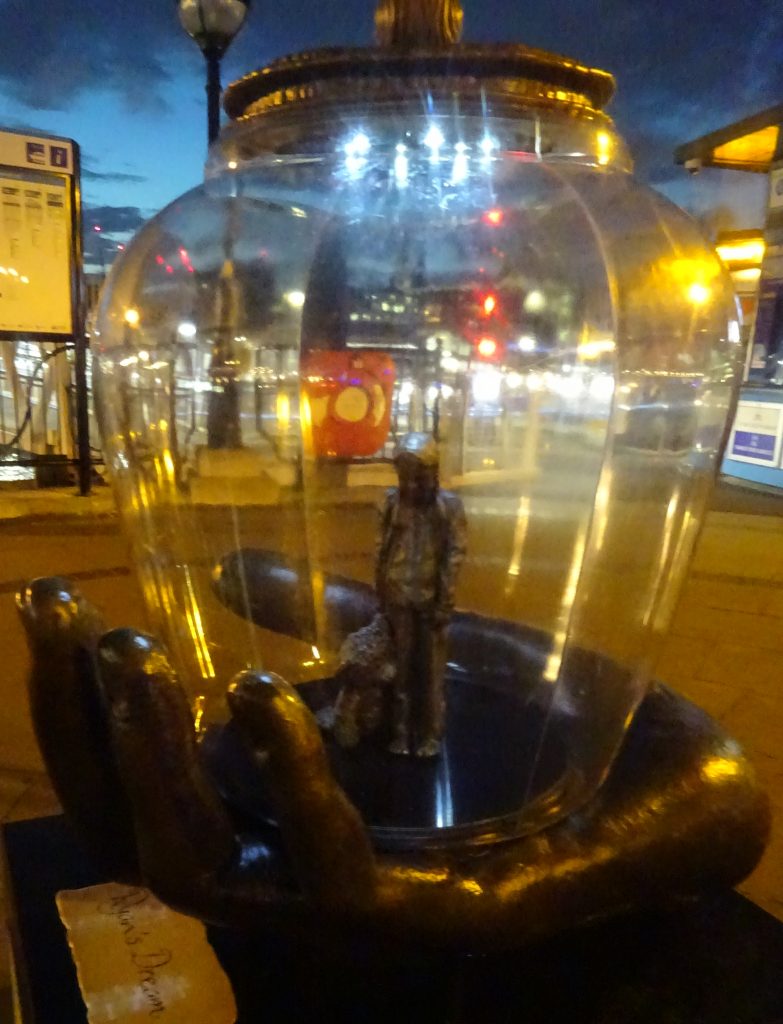 So the trail that was meant to take about an hour and a half took us much longer with getting lost and other distractions! But I loved every minute of it! At the end we decided that it was time for food, so we headed off the find some, but that is in the next instalment: My London Sandemans Adventure.

Check out accommodation in London on Tripadvisor! 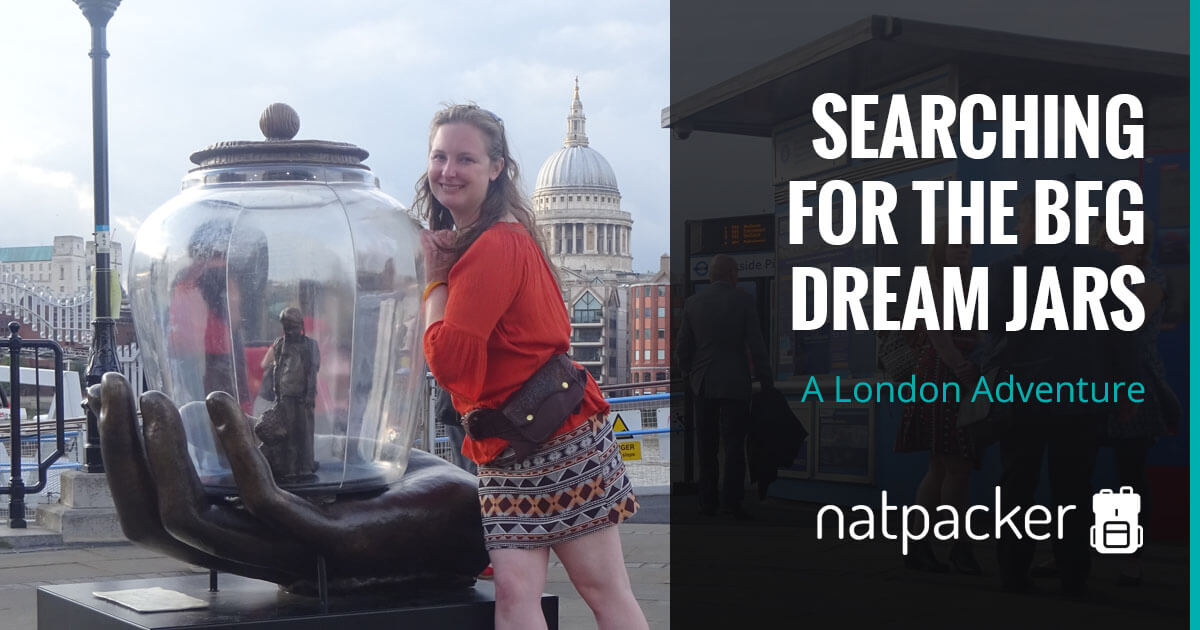