Part two out of four of the London Adventure! This starts just after me and Dave finish our Quest for the BFG Dream Jars! The main part of this installment is the London Sandemans Adventure! Hope you enjoy…

After running around on our Dream Jar mission, we realised that we really should’ve grabbed some food at some point – it was about 9.30pm by the time we had finished at the Globe! So we decided to see what we could find and just generally wander around. We took our wanderings towards the airbnb, so that we wouldn’t be spending hours finding our way back later.

We passed the Winchester Palace (well what’s left of it) and the Golden Hinde. I then noticed a sign to Borough Market and thought ‘wasn’t that where the guys on the train said is great for food?’ Being a complete idiot and not thinking they’d be shut!

So we got to Borough Market and you’ll never guess what, but it was all shut up for the night! At this point we decided to head back towards the Thames. As we rounded a corner we came across a couple of bars/restaurants. One had a massive pan of paella outside – this was just the kind of food we were looking for! It was a lovely night so we grabbed a table outside.

The place was called Cafe Brood and the menu was mainly tapas, paella and sharers. We were just debating what tapas we should have when the waiter came to tell us what they’d run out of – pretty much anything with seafood, which was pretty much all the tapas we would’ve wanted! So we went for a sharer – the Mediterranean Meze for two. It was great, there was a lot of very nice food! I definitely recommend Cafe Brood if you’re in the area! 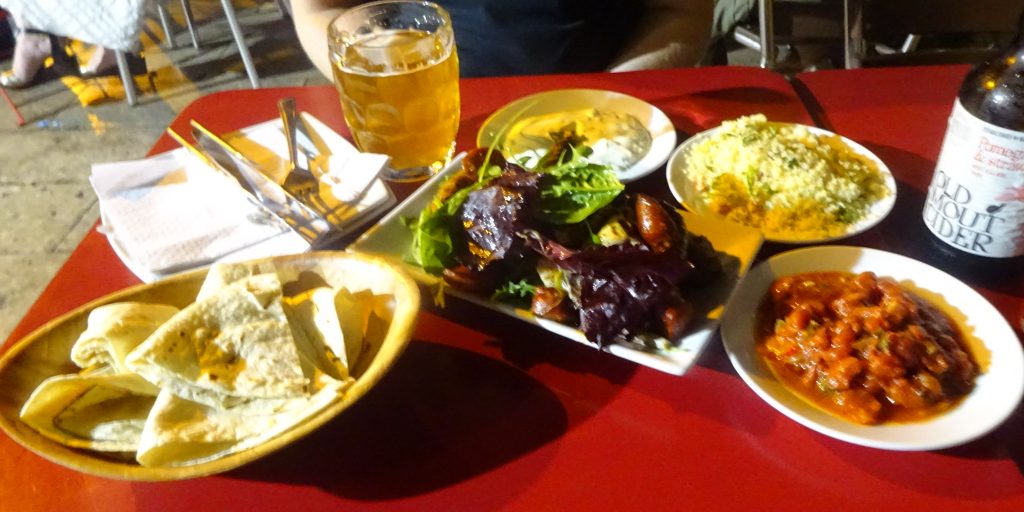 The Changing Of The Guard

After the amazing food we started on the walk back to the Airbnb for some sleep!

A Plan And Some Distractions

We had a busy day ahead of us the next day. We had afternoon tea booked at 2pm and had tickets to see ‘The Taming Of The Shrew’ at the Globe at 7pm. We wanted to catch a Sandemans Free Walking Tour in the morning (love Sandemans tours, generally always do them in every city every time I visit!) So we planned to get up early and walk all the way to Covent Garden for the 10am tour.

Getting up early was managed. We were on time and all looked like it would go to plan, then we started talking to our host Diaz! It was good talking to him, but it did make us run late! It didn’t matter too much as there was another tour at 11am, so I’m glad we got to know our host a little.

We set off knowing that we were probably going to miss the 10am tour – it was over an hour walk. The plan was if we weren’t at Covent Garden by 10.30am we would jump on the nearest tube.

We headed to Tower Bridge and crossed so that we could walk along the north bank. Along the way there were a few more distractions. The first one was a Dream Jar! This dream was from Simon Cowell and was called “For The Love Of Animals” the dream is to keep animals protected. Next we noticed a pub that was called “The Hung Drawn And Quartered” which was near the Tower of London. We made a mental note to try and get back here (but unfortunately did not manage it on this trip). 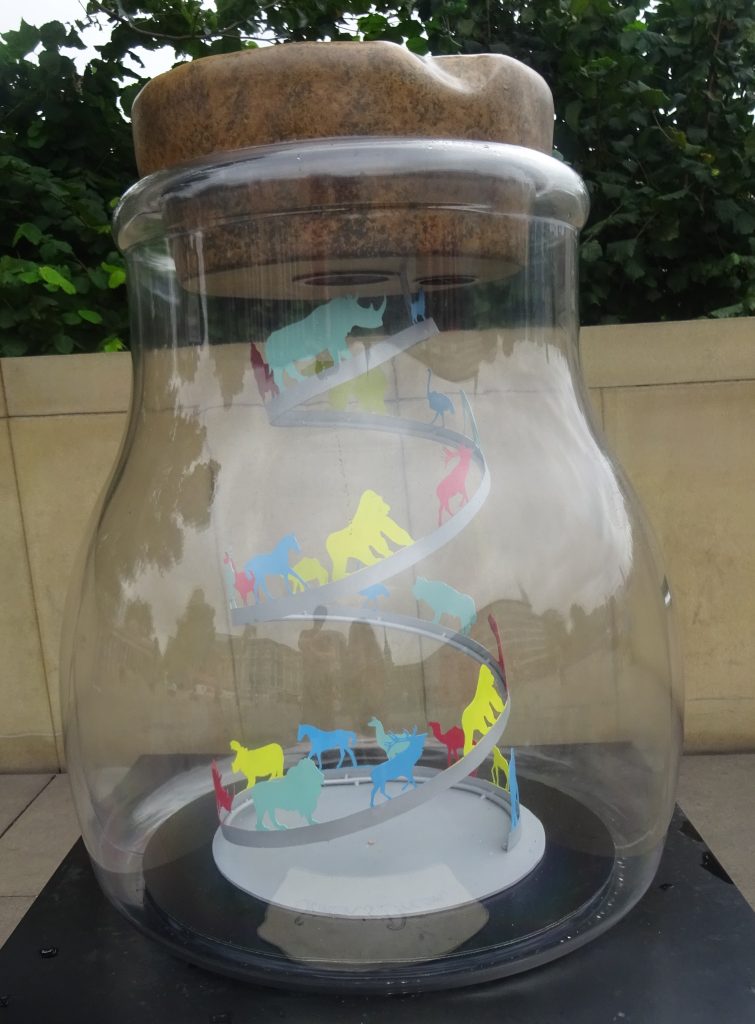 ‘For The Love Of Animals’ Dream Jar

We reached Covent Garden with enough time before the 11am tour for a little wander round. Then we went to the tour start point and got our tickets. The Sandemans tour is free (they do more that can be paid for too) but the guides work on tips and you do need to get a ticket.

The tour started and our guide introduced himself as Jake (not Ha-Ke, as the Spanish guides call him). He said that the tour would last 2 and a half to 3 hours. We did some maths and quickly realised we would not see the whole tour, but we decided to stay for what we could as we both really like these tours. 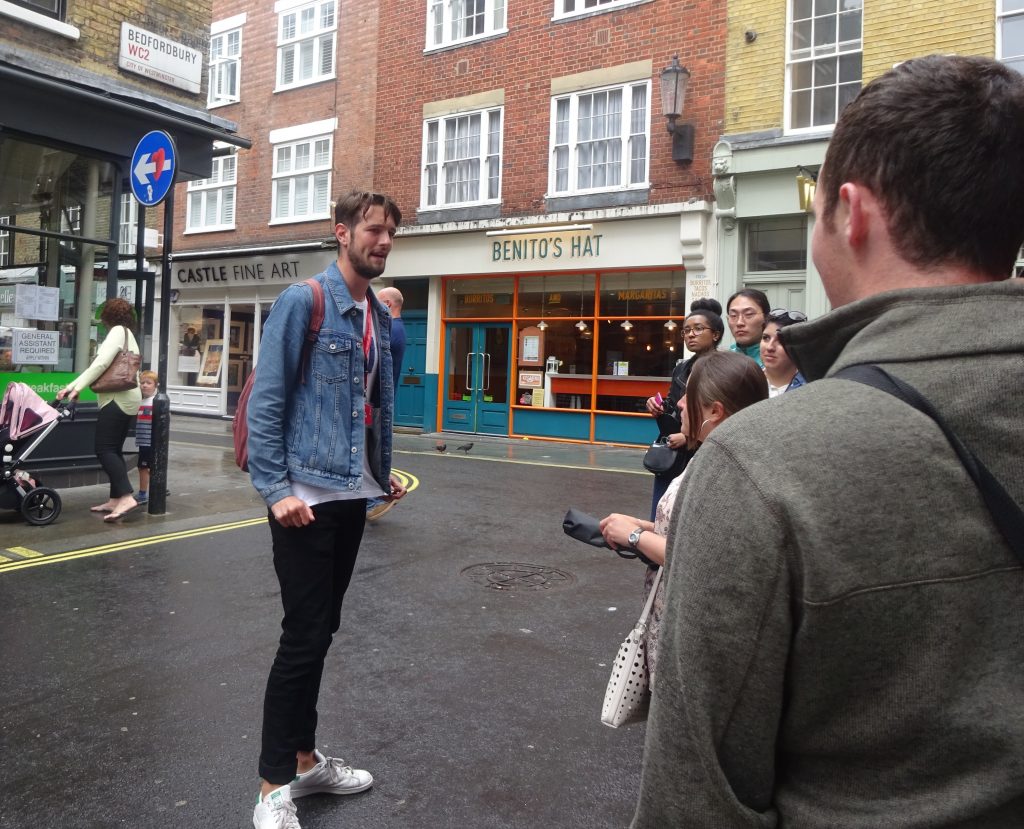 Jake first pointed out the coat of arms on the Royal Opera House and that there is French on it. A lot of the English language comes from French. We then started walking and Jake was a fast walker! We caught up with him and let him know we would have to miss part of the tour.

At the next stop Jake pointed out the street signs. Even though we were in London, we were in the city of Westminster, which is clear on the signs. The actual city of London is a very small area around the Tower of London. London is made of a few cities that grew and overlapped each other. 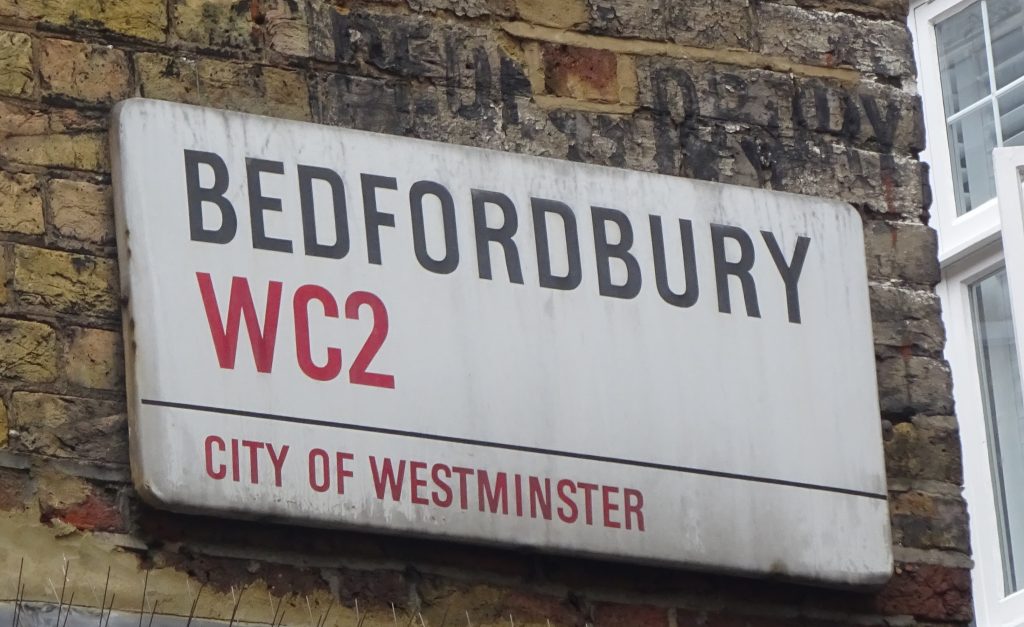 Next we went down a alley, which is what Knockton Alley from Harry Potter was based on (didn’t actually film here as the alley was too thin). There was another tour going the opposite way, so we had a fun jiggle to pass each other! Once out the other side he pointed out that opposite is the alley that Diagon Alley was based on. 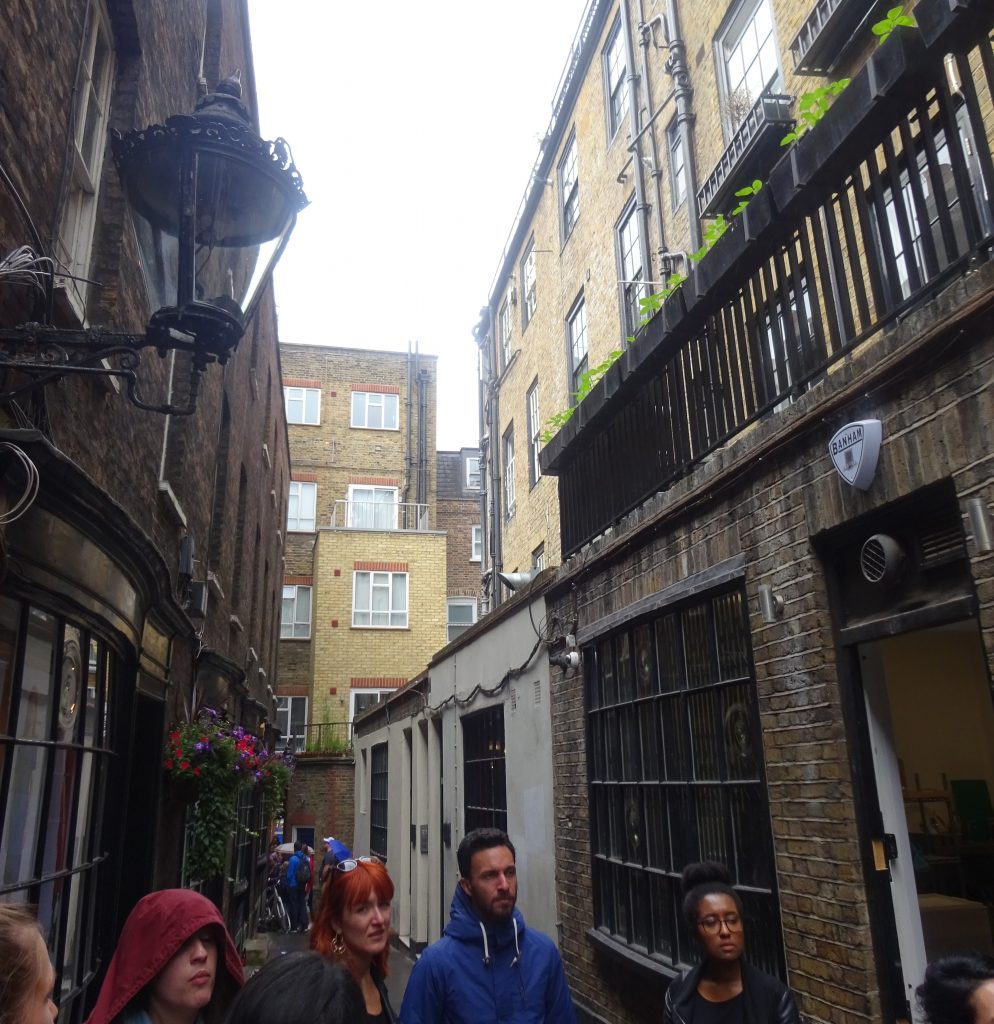 At the next stop he told us to try not to stop at every war memorial to take a picture. He runs his tour on a 90% basis, once 90% are there he will start talking! London has so many war memorials that they are uncounted.

The next stop was Trafalgar Square, one of the many places in London named after a victory over the French. 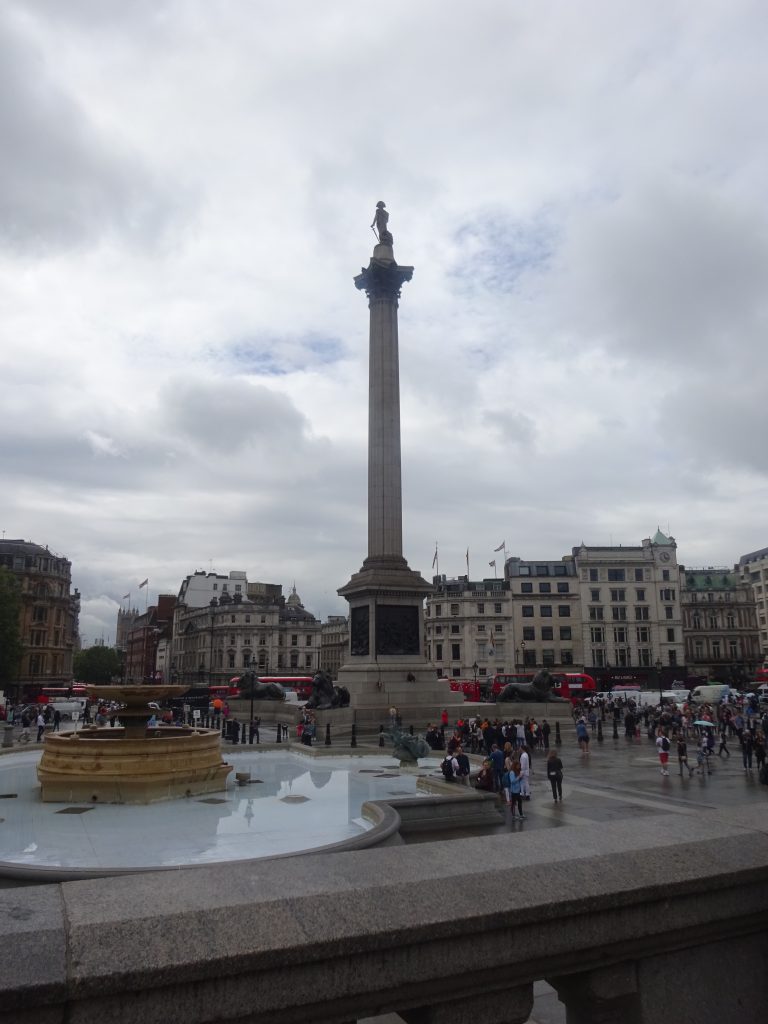 Here Jake told us about Nelson and how he was shot whilst celebrating his victory over the French at the Battle of Trafalgar. The English now had a problem. Nelson had become a war hero and was loved, they didn’t want to bury him at sea, but had a six week voyage home. So they put his body in a barrel of brandy and marked it as not to be drunk from. However, when the ship returned they discovered that the brandy was gone – some thirsty sailors had drunk from the barrel… Apparently you can see the barrel, but I can’t remember where! 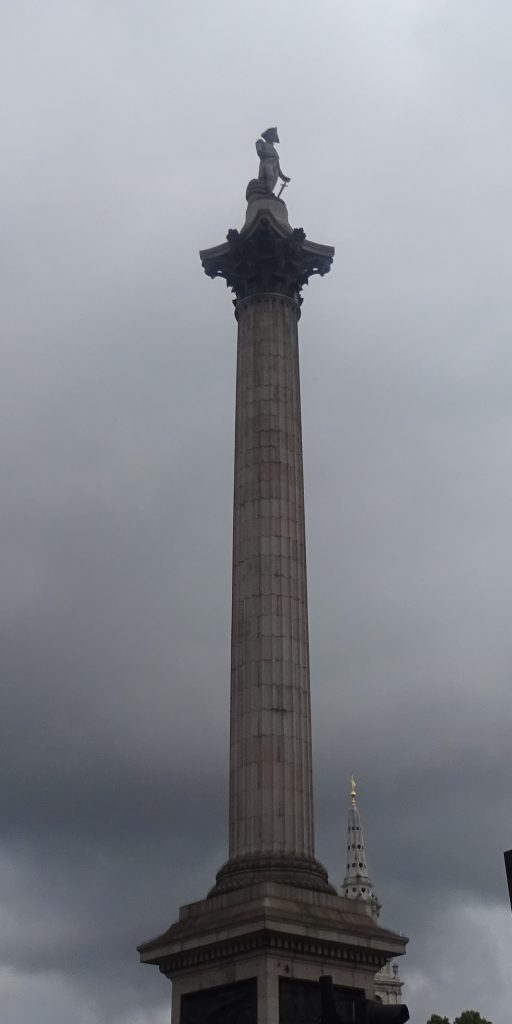 The lions around Nelson’s Column are also worth noting. Firstly they are made from the canons melted down from French ships. Also the sculptor had never seen a lion, which is why they are in a more dog-like pose than a cat-like pose. He based the sculpture on his dog… 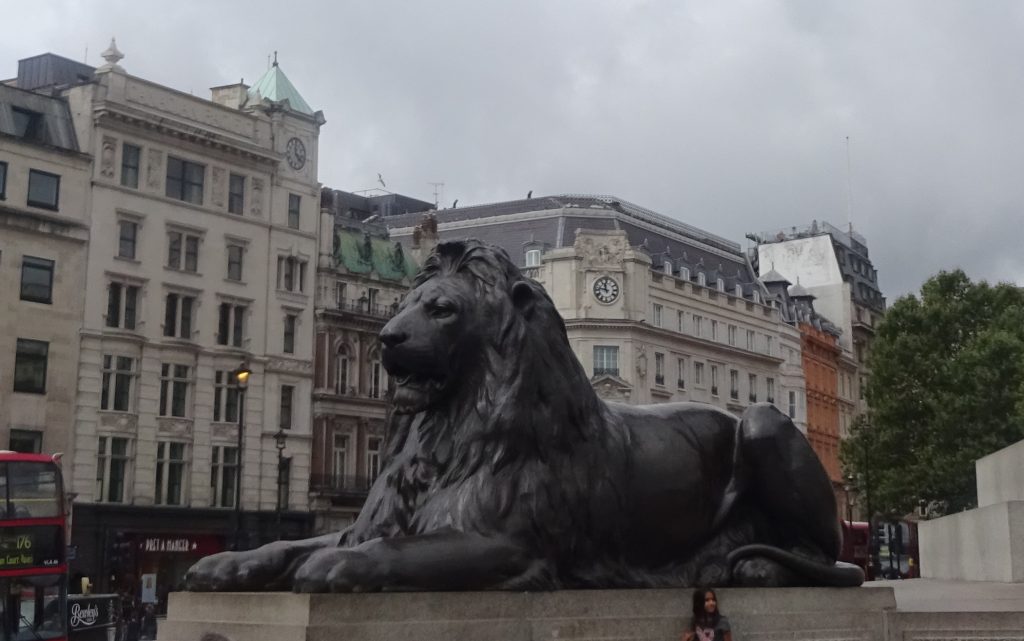 A little while and a couple of stops later we made it in time to see the changing of the guard! It’s not the most exciting thing, but well worth seeing if you’re around. A nice tradition. So Jake told us more about it, the different regiments and a bit about the Royals. He told us his favourite Royal was Princess Anne because she has a criminal record (for something silly that I can’t remember) and her reaction when someone tried to kidnap her and hold her hostage when she was young. Great story, but I’ll let you go on Jake’s tour to find out – he told it really well!

The Changing Of The Guard

We then went for a closer look at the palace. Here Jake gave us a bit of information about Queen Victoria and our current Queen. We then went through St James Park where I saw the Dream Jar “Read” which is the dream of HRH The Duchess Of Cornwall who dreams that every child learns to read. 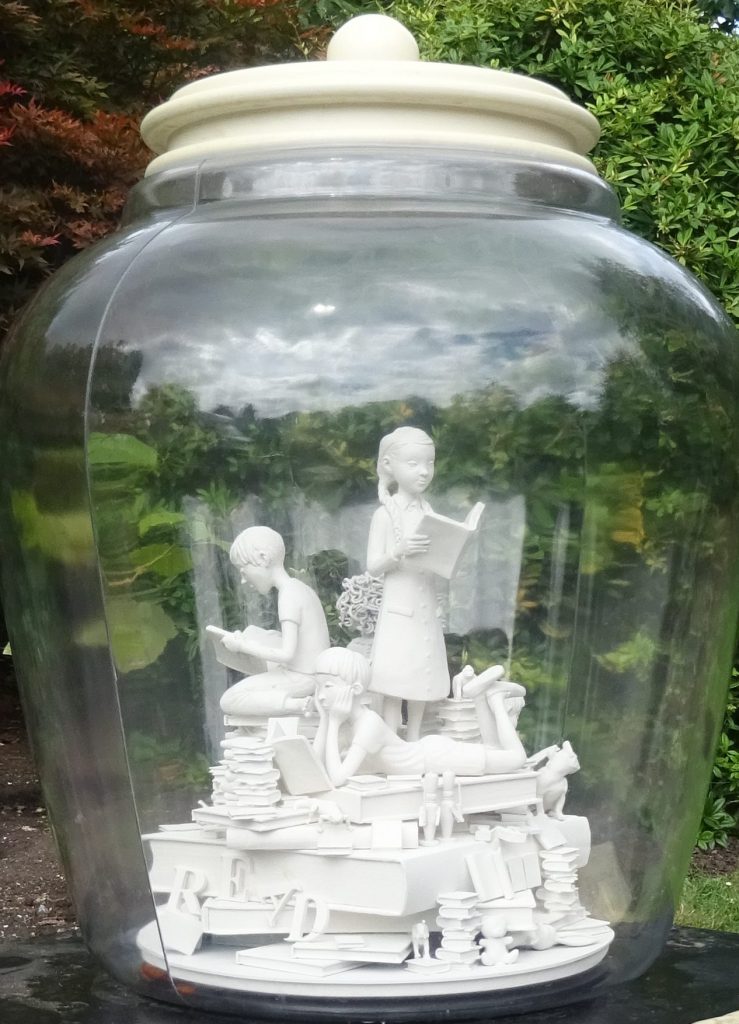 Whilst in the park Jake also told us about the other tours available. We didn’t have any time on this trip, but there are about three that I am interested in going back and doing. He also gave us a toilet break to ‘spend a penny’ or 20p as it is in London – rip off! I hate paying for toilets. I refuse to. I don’t see why I can get free WIFI practically everywhere and have a right to die on the streets but no right to go for a wee for free! Alright, I’ll pay if I go into a cafe etc and don’t buy anything, I think that’s fair enough, but not public toilets. And that’s my rant…

Whilst waiting we asked Jake how we’d be best getting to the Swan, where our Afternoon Tea was booked. It was getting near that time, so we knew we’d have to leave soon. Heading off again we passed Churchill’s Bunker, which had quite a queue. This is an attraction we keep meaning to do but never seem to fit in!

Once we got to the next stop near Big Ben it was time for us to leave. We thanked Jake and gave him his tip. He seemed genuinely surprised that we were paying him even though we were leaving early! Then we headed to Westminster station to head towards the Swan.

But that story is for the next installment! Read about the Shakespeare filled afternoon!

Want to go to London? Check out accommodation on Tripadvisor. 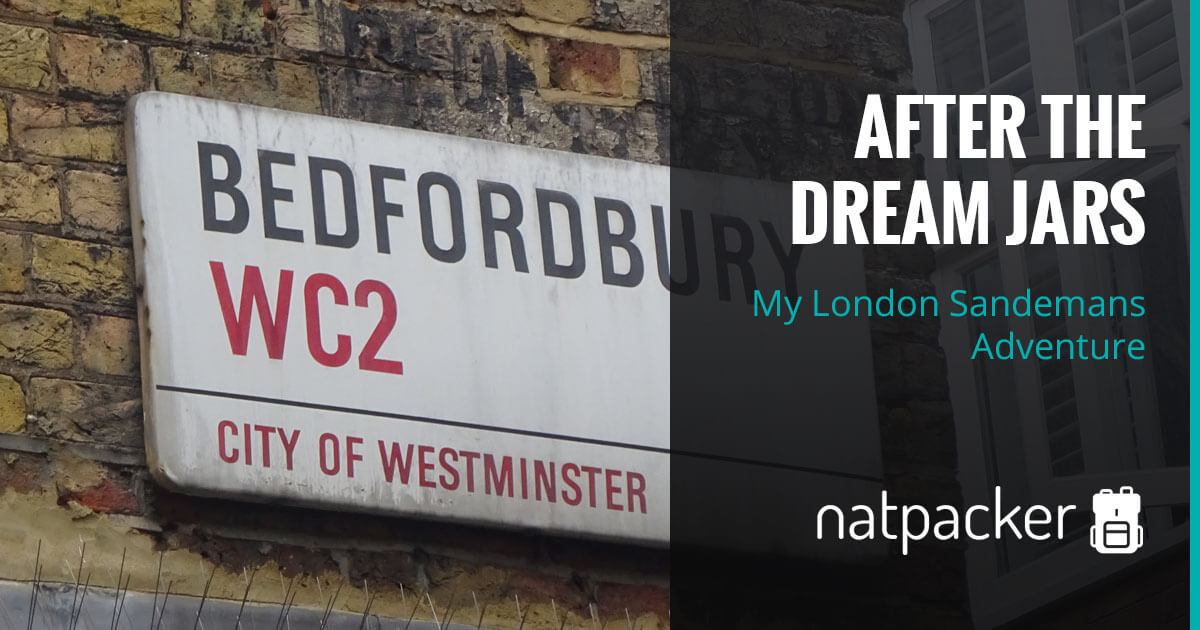