Glenrowan is a quiet town, 29km (18 miles) from Benalla. This small, quiet town is a popular place to visit, for it’s connections with Ned Kelly. This town was the site of the Kelly Gang’s last stand. The town really focuses on it’s Kelly connection, but it is also in a famous wine region.

Ned Kelly is has become a legend in Australia. He’s sometimes branded as the ‘Australian Robin Hood’. This historical figure was an underdog who was fearless and charismatic. 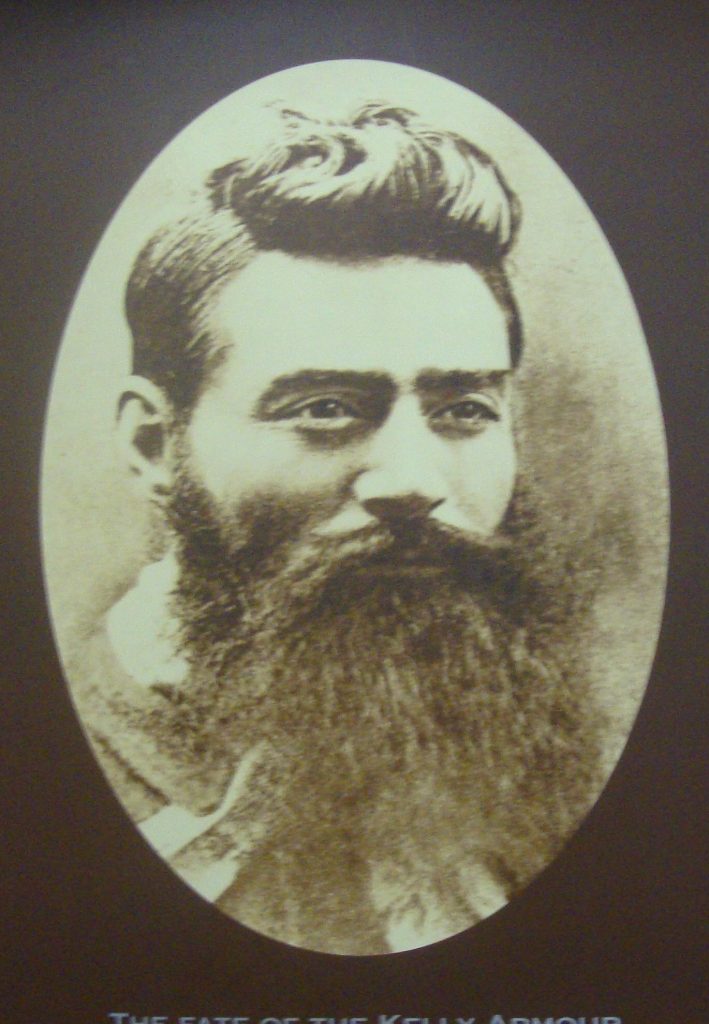 Born in 1855 to a poor family, Ned Kelly was the eldest of eight children. His father, John ‘Red’ Kelly, was an ex-convict who had been transported for the crime of stealing two pigs. His mother, Ellen Quinn, was an Irish ‘bounty migrant’. The family was seen to be trouble makers by the local law enforcement. Red Kelly was jailed for horse theft and died before finishing his sentence.

Although Ned saved another boy from drowning during his childhood, and was awarded a green silk sash as recognition for his bravery, he was constantly in trouble with the police. Although he was mainly in trouble for petty crimes, it all went wrong at the Fitzpatrick incident.

Fitzpatrick, a police constable, arrived at the Kelly’s home to arrest Ned’s brother Dan for alleged horse stealing. A brawl ensued after which both Dan and Ned were wanted for attempted murder (although it is uncertain whether Ned was actually present at the Fitzpatrick incident). His mother was jailed for three years for aiding and abetting attempted murder.

Ned and Dan fled into the bush and were joined by friends Joe Byrne and Steve Hart. The foursome became known as the Kelly Gang. the gang committed bank robberies to support themselves, which obviously didn’t help their situation. During one bank robbery the Jerilderie letter was dictated by Ned to Joe. This letter shows Ned’s personality and stated that the police were unfair to him and his family, he justified his crimes in this letter.

Things turned worse for the Kelly Gang. Four policemen were sent on the hunt The police camped in Stringybark Creek, where they were ambushed by the Kelly Gang. The gang did not intend murder, but three of the police were killed. After this incident the largest manhunt in Australian history began.

At Glenrowan, the gang planned to take a number of hostages to barter for the release of the Kelly’s mother. First Aaron Sherritt was shot dead for being an informer, which caused the police to redouble their efforts. The gang then took 60 hostages in a hotel at Glenrowan. The railway lines were pulled up so that the train with the police on board would be derailed. However, Ned made the mistake of letting a school teacher know, who flagged down the train and warned them. 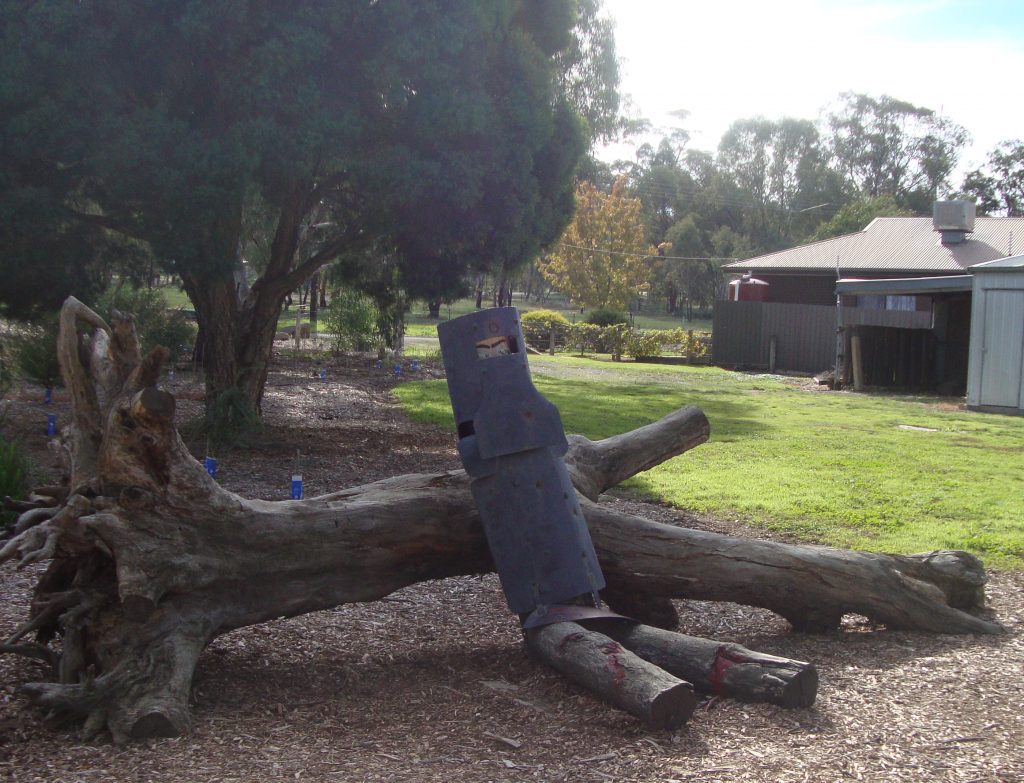 The police arrived and surrounded the hotel. A shoot-out and siege began that lasted seven hours. The hostages were released during a lull in the fight. Dan, Joe and Steve all died. Ned, however, came out wearing his homemade armour. He walked towards the police shooting. Ned was shot and taken alive.

On 11th November 1880 Ned Kelly was hanged for his crimes. He was 25 years old. Despite a petition for reprieve, which was signed by over 30,000 people. It is believed that his last words were “Such is life.”

Glenrowan really focuses upon it’s Ned Kelly connection. The first thing you will see when arriving is a huge effigy of Ned Kelly in full iron armour. He is apparently guarding the town. 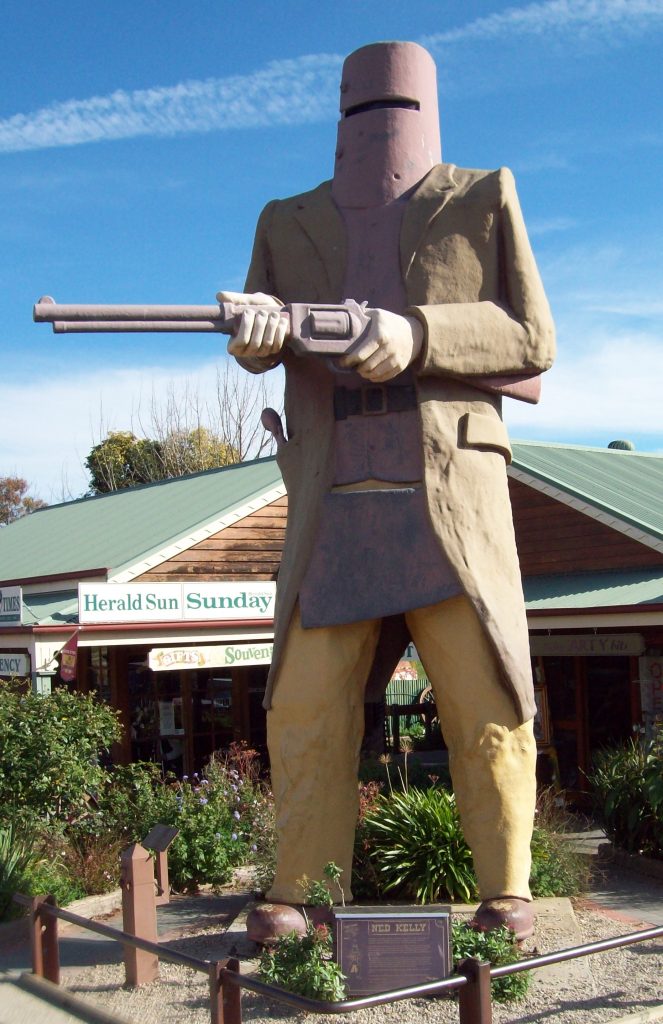 Opposite the effigy is Kate’s Cottage Homestead and Museum. This is a souvenir shop with a Ned Kelly Museum. Kate was the name of Ned’s sister. An audiotape talks you through Ned’s life. There is a replica of the Kelly house (the original is nothing but rubble). You can see the bare floors and bark roof, among other features, that show a life of deprivation that probably caused the family to enter into crime.

You can even visit the site of the siege. Siege street is near the train station and has effigies scattered around. You can pick up a town map from the Bakehouse for a self-guided tour. 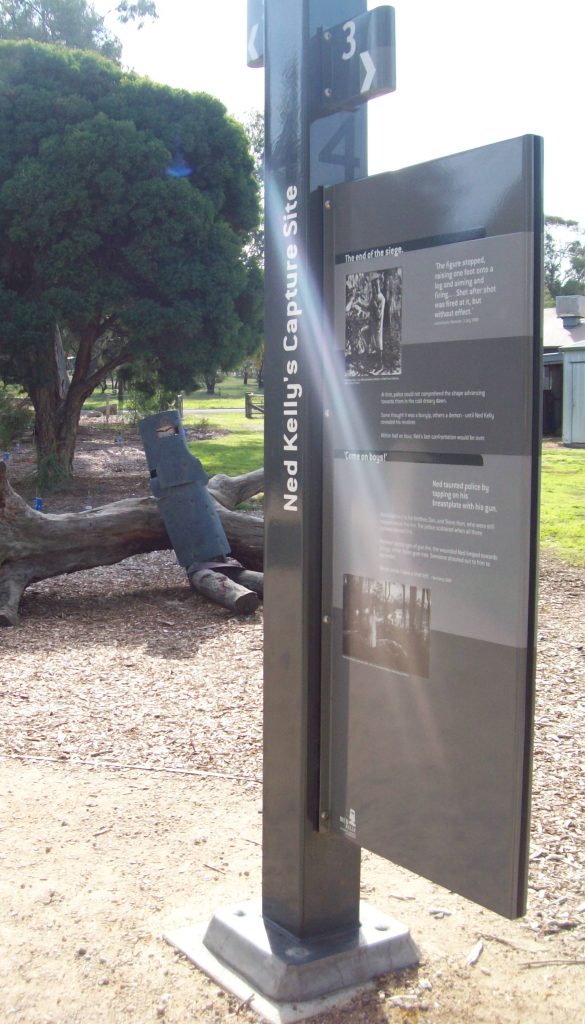 If you’re into the Ned Kelly story, Glenrowan shouldn’t be missed! Although it is a little tacky it’s still fun to visit. With many Ned Kelly attractions, you can gain a lot of history from this town! Don’t forget the wine from this region too! 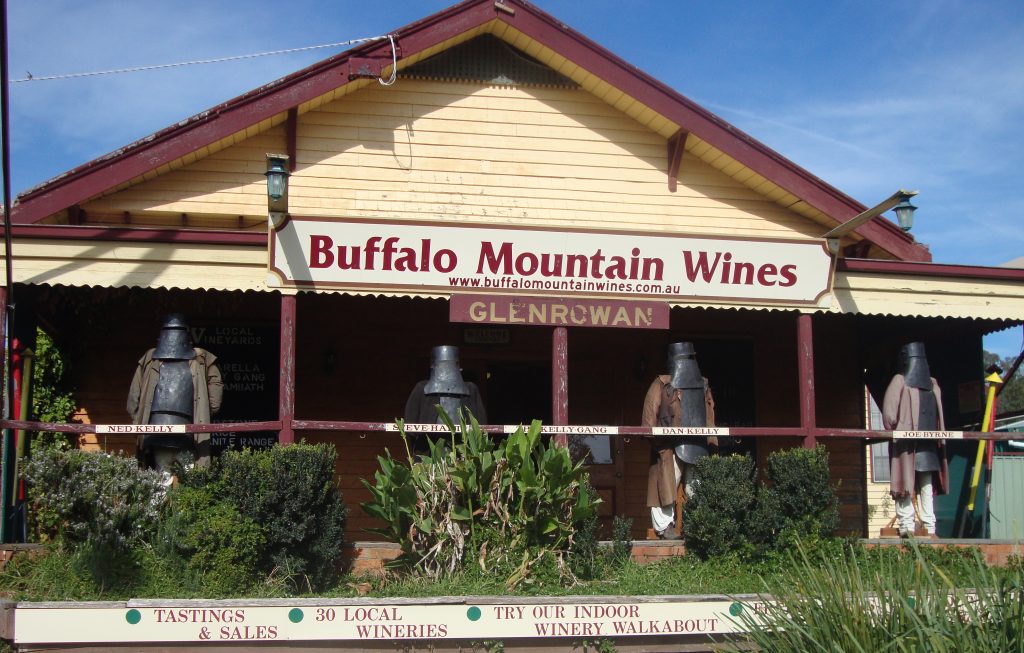 Kelly Gang Glenrowan – Even The Shops Use The Ned Kelly Link!

Why not visit? Check out local accommodation on Tripadvisor. 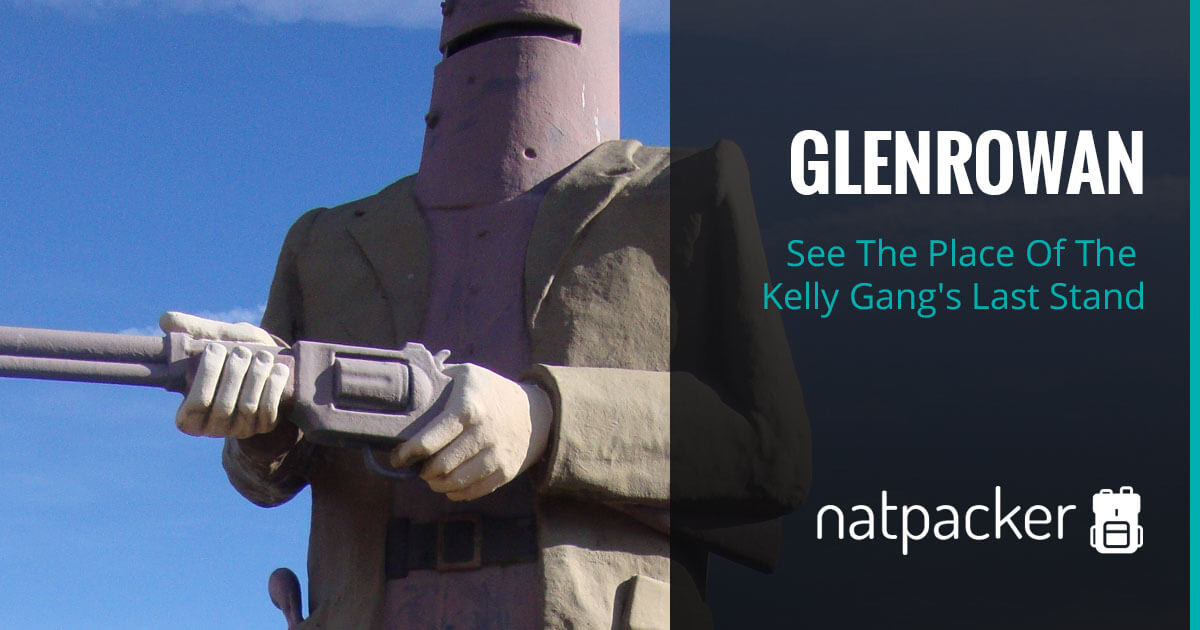