Rialto Bridge, or Ponti di Rialto in Italian, is probably the most famous bridge in Venice. This iconic bridge crosses the Grand Canal and has been a tourist attraction for many years. A stone-arch pedestrian bridge, it is a beautiful crossing, though it can be very crowded. Regardless of the crowds, it’s a sight you shouldn’t miss in Venice.

The History Of Rialto Bridge

The first bridge to be in the place of Rialto Bridge was a pontoon bridge or a floating bridge that was constructed in 1173 and finished in 1181. It crossed the narrowest part of the Grand Canal in the hear of Venice. This bridge was called Ponte della Moneta. However, the importance of the Rialto Market caused the traffic over this bridge to increase, so a wooden bridge was built in 1255. 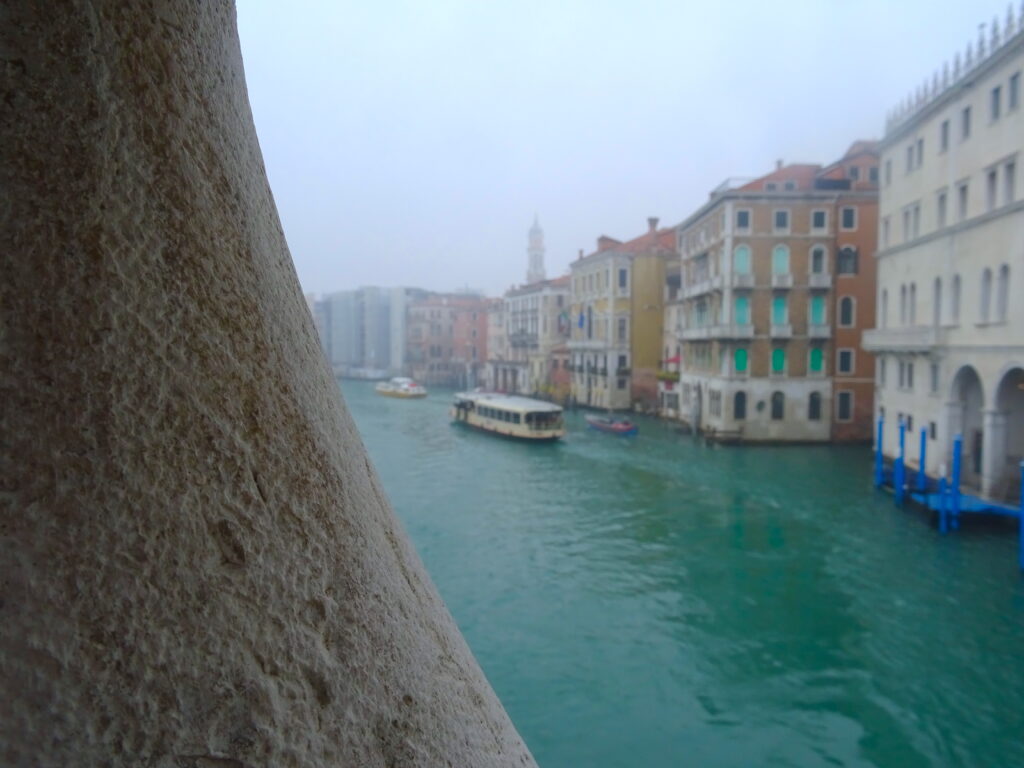 Crossing The Bridge Gives Views Over The Grand Canal

This wooden bridge had two inclined ramps that met at a movable central section. This central section could be raised to allow tall ships to pass. Shops were later built on this bridge in the 15th century and the connect of the bridge to the market caused it to become known as Rialto Bridge.

The wooden bridge had a few difficult times, being partially burnt in a revolt and collapsing a few times over the years. Therefore it was proposed in 1503 that the wooden bridge should be replaced with a stone structure. It was in 1551 that the authorities requested proposals for the stone bridge.

A single-span bridge, designed by Antonio de Ponte, was chosen for the replacement bridge. The design was similar to the wooden bridge that it would be replacing. With two inclined ramps leading up to a central portico. Covered rows of shops were to be placed on either side of the portico. The construction of his design began in 1588, despite the fact that many thought the bridge was too audacious and wouldn’t last long. 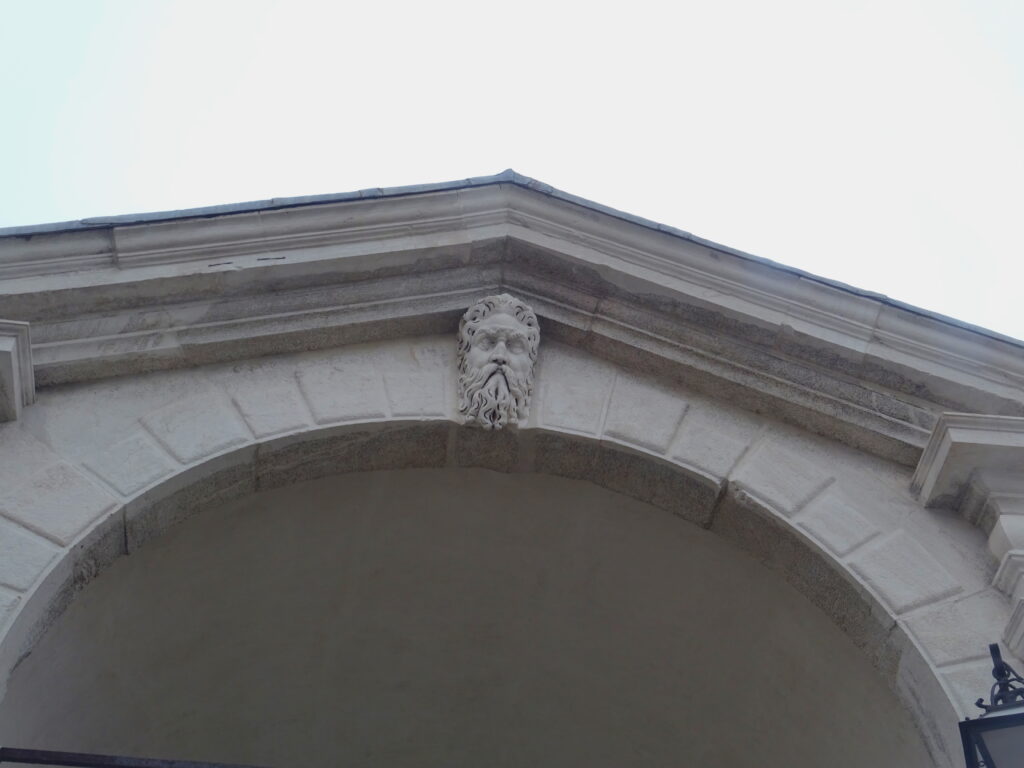 The Central Portico Is Decorated

Rialto Bridge, as we know it today, is over 600 years old and is the oldest of the four bridges that span the Grand Canal, proving all the doubters wrong. Ponti di Rialto was the only pedestrian crossing until the 1850s, before that the only other way to cross was using gondola ferries. Since then three other bridges have been built crossing the Grande Canal: Ponte della Costituzione; Ponte dell’Accademia; and Ponte degli Scalzi. 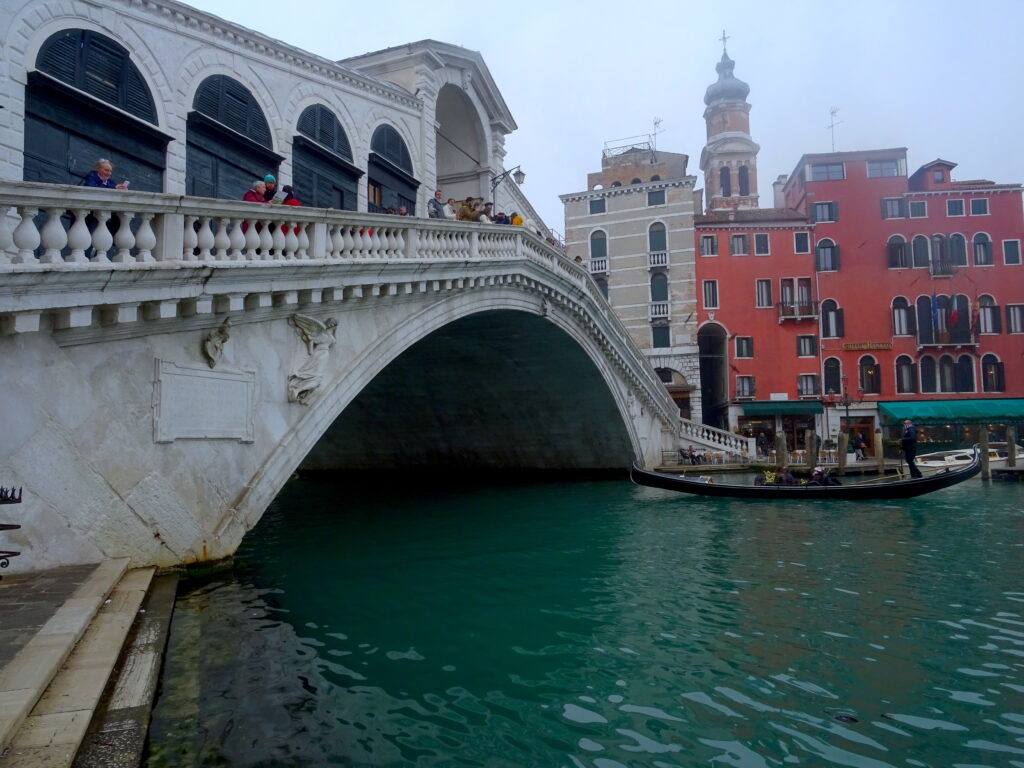 The Bridge Is An Iconic Sight In Venice

I love a few facts, and there are loads about Rialto Bridge. Here are just a few: 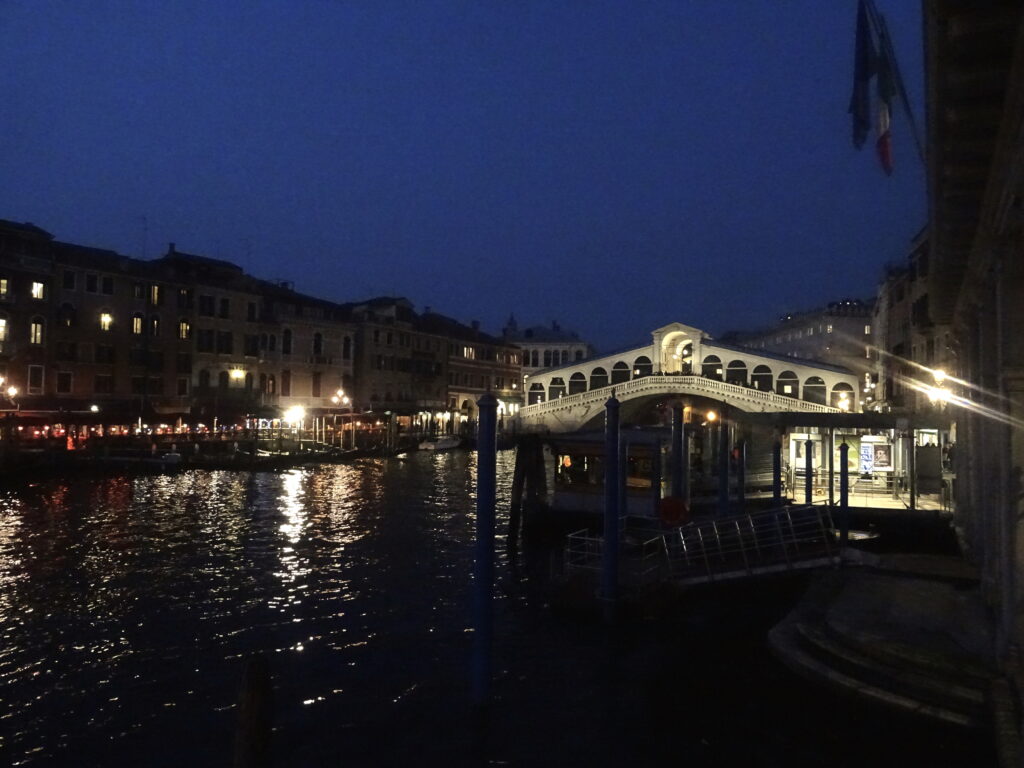 As the bridge is a main crossing of the Grand Canal, you can’t really miss visiting Rialto Bridge whilst in Venice, even if you tried. Chances are you will end up crossing it at some point.

The bridge is not only practical, joining two sections of the city of Venice, but it is decorative too. Reliefs adorn the bridge, so not only is it beautiful from afar but there are details close up too. The reliefs are different on each side of the bridge. On the north, you will find stone reliefs of St Mark and St Theodore, then on the south side, you will find reliefs of the Annunciation. 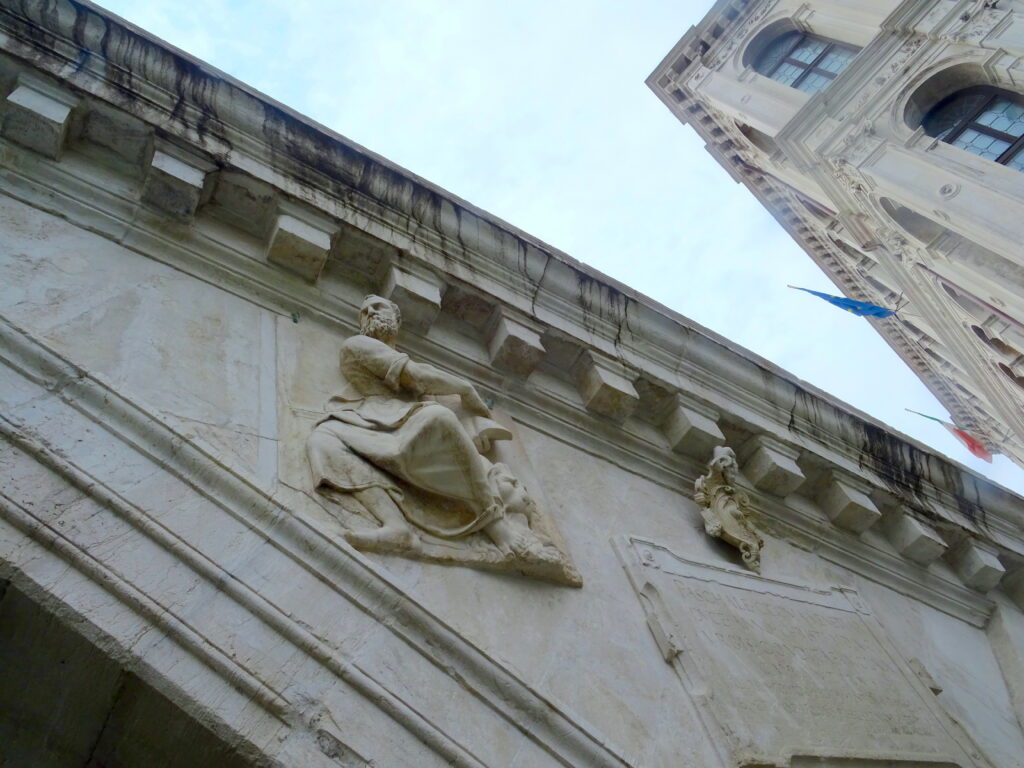 You Can See The Reliefs From Below The Bridge

As I have said, you can’t really miss this tourist attraction, even if you tried. But if you want to learn about the bridge, check out some of these tours:

Afternoon Discover Venice: This 90-minute walking tour will take you through Venice with an expert guide. You will be taken to many of the must-sees, including Rialto Bridge and Piazza San Marco as you wander through the historical centre.

Private 45-Minute Gondola Ride: See the beauty of Venice from the water. Starting at St Mark’s Square you will see Venice from the city’s best angle and pass under Rialto Bridge.

San Polo And Rialto: 2-Hour Private Walking Tour: In this tour, you will discover the history of Venice through tales of prominent merchants, courtesans and painters. Including Rialto Bridge and Campo San Polo you hear legends and admire the artwork of Venice.

Or you can check out other tours that include Rialto Bridge on Get Your Guide.

Seeing Rialto Bridge from the water is an incredible experience, but personally, I wouldn’t hire a gondola to do this. Find out why I think you shouldn’t bother hiring a gondola. 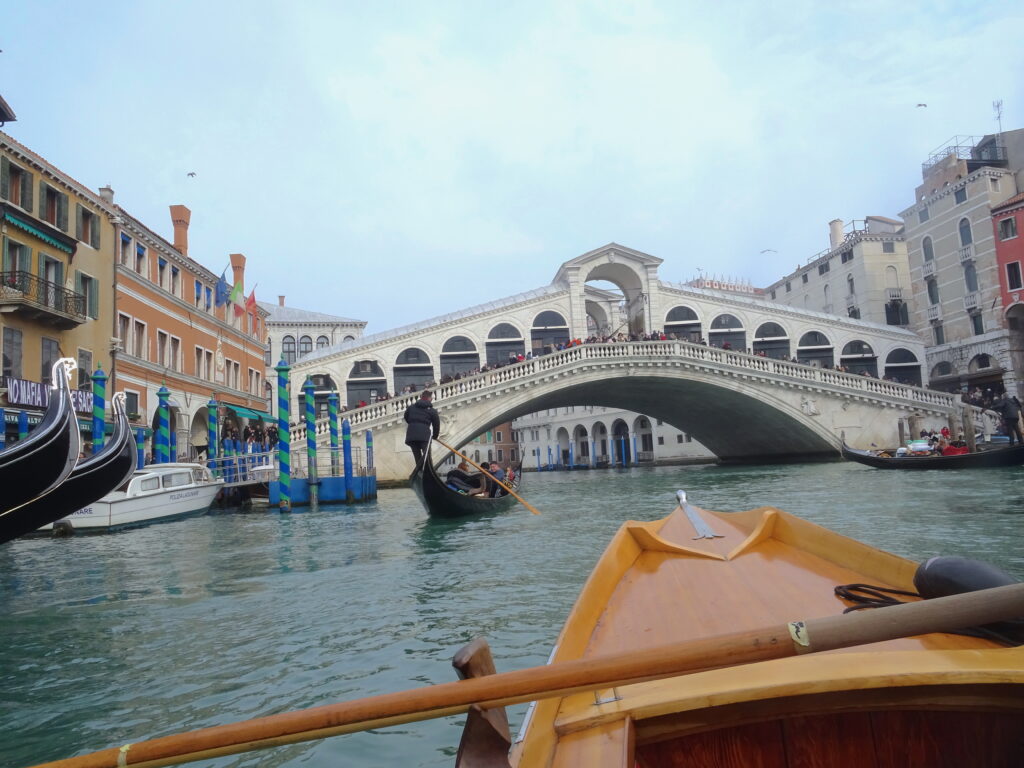 Seeing Rialto Bridge From The Water Gives A Different View

How To Get To Rialto Bridge

If you want to get to Rialto Bridge without a tour, there’s no easy path that I can just direct you on, like I normally would in these posts, as Venice is a maze of streets and canals. Luckily, the bridge is signposted, from Santa Lucia, so you can just follow these!

Alternatively, you can come out of the train station/bus station and simply turn left once you hit the grand canal (which is basically in front of these stations) and follow the canal until you get to the bridge. Not the most direct route, but you’ll see a lot of the different areas of Venice. 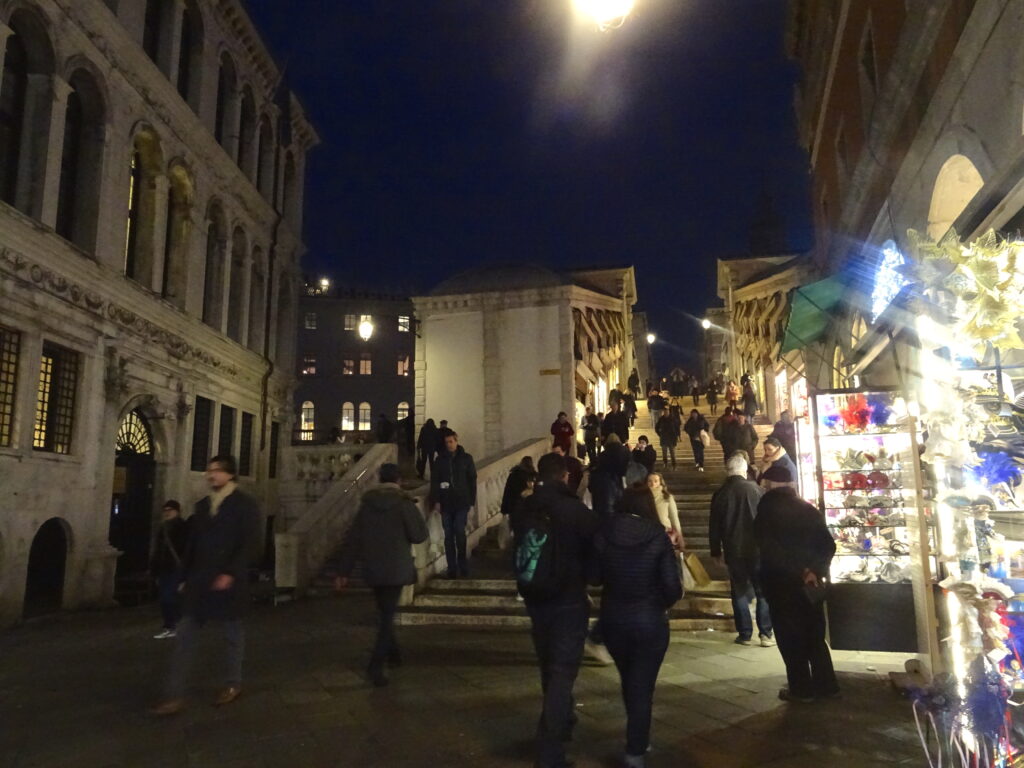 Another option is to come out of the train/bus station, cross Ponte delgi Scalzi and keep walking. Angle for straight across and a little bit to the left, keep heading east. You should pick up signs for either Rialto Bridge or St Marks Square, if you follow these (before you cross the Grand Canal again), you should come across the bridge.

Finally, you can always hire a water taxi or water bus to the bridge. If you chose a Vaporetti, you are looking for water bus routes 1&2. These both go along the Grand Canal and so pass under Rialto Bridge. You can find updated timetables and maps for each route here. 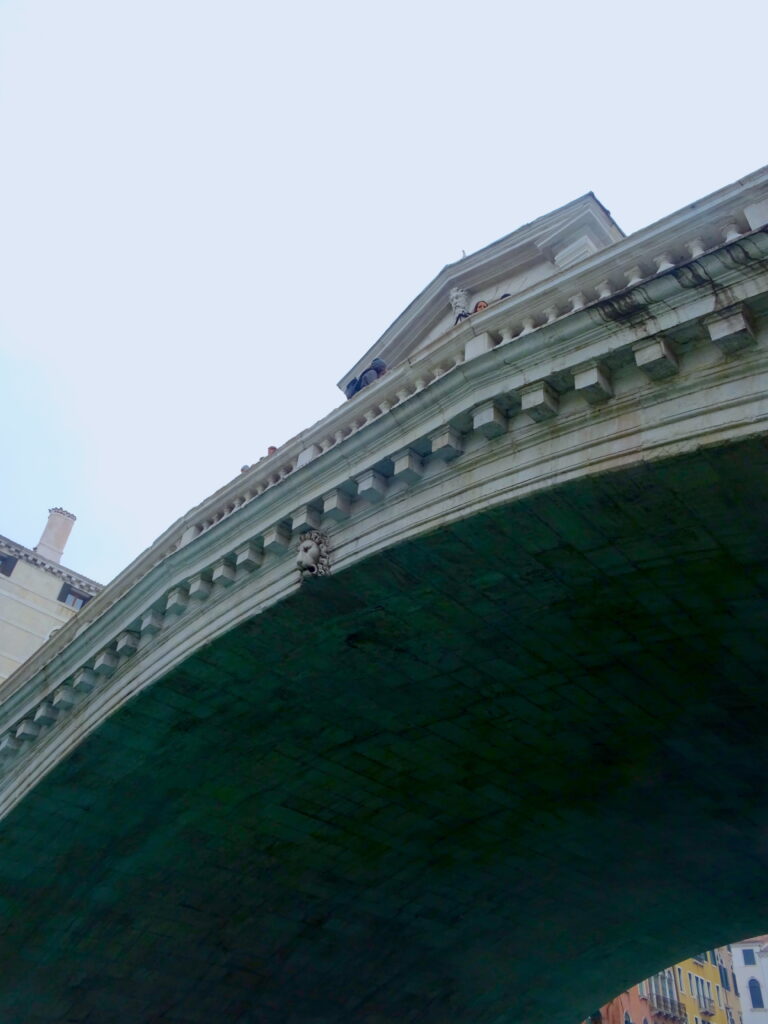 By Water, You Can Pass Underneath The Bridge For A Unique View

If you plan on visiting Venice and Rialto Bridge, check out nearby hostels on HostelWorld. 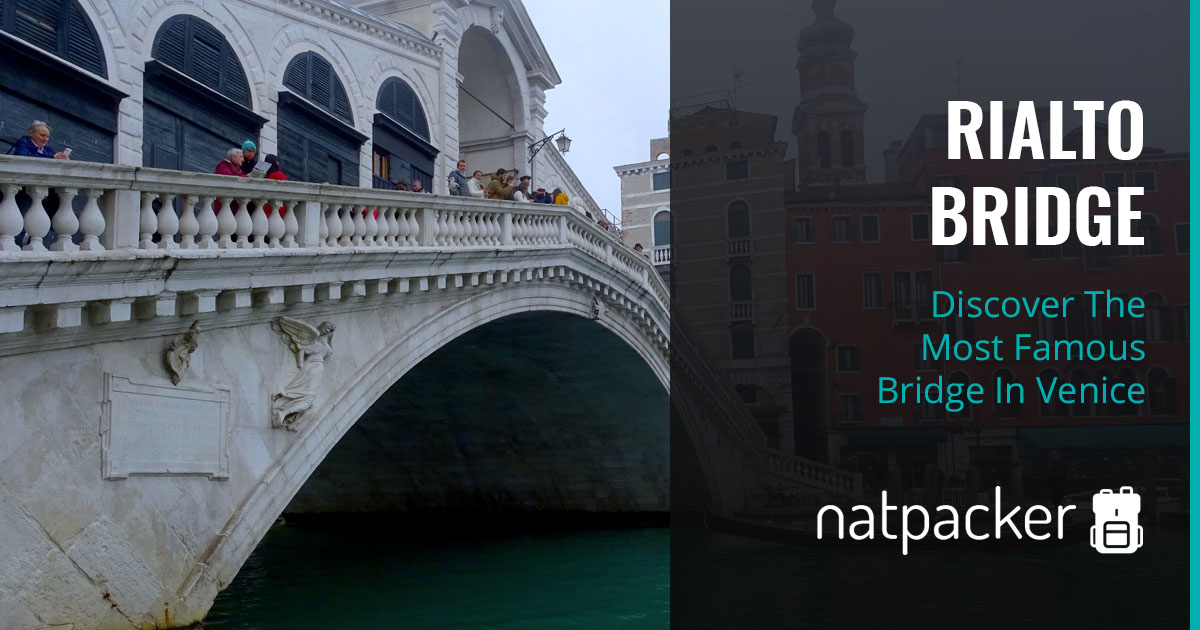