Have you even really been to Australia if you haven’t been to Uluru? Also known as Ayers Rock, this monolith sits in the Uluru-Kata Tjuta National Park and is a well-known tourist destination.

There’s plenty to do in the Uluru-Kata Tjuta National Park, not just seeing Ayers Rock. There are plenty of hikes and opportunities to understand the history of the area and the native people that still call this place home. Uluru has significant cultural importance to the aboriginals who call this part of Australia their home. Because of this, and the spectacular geological rock formations, the national park is a UNESCO World Heritage Site.

The History Of Uluru

Both Uluru and the Kata Tjuta began to be formed around 500 million years ago. At around this time, the whole area was covered in seawater. The weight of the seabed caused sandstone to form.

Once the sea disappeared (around 400 million years ago), rocks in the areas tilted and shifted due to tectonic movements. Over the course of time, softer rocks have been eroded away, leaving the harder rocks, such as Uluru to be left behind.

Uluru now stands out in the Red Centre of Australia. The 836m tall monolith makes an impressive site rising above the flat desert.

The Anangu People Of Uluru

It is still debated when the native Anangu people arrived at Uluru rock, with most estimates putting the date at around 30,000 years ago. The Anangu people survived here in small, mobile groups so that they were able to move between waterholes. The semi-arid environment makes water a highly valued resource, so the permanent waterholes at the base of Uluru make the area important to the natives. Permanent waterholes attract game, as well as providing water, so have a practical significance as well as a religious one.

However, Uluru is not a shrine that the Aboriginals make pilgrimages to, the Rock is simply an important ancestral area for the Anangu for water, food and ceremonies. Significant events from Aboriginal stories are said to have taken place here, deepening the cultural and spiritual significance. Uluru is not actually the name of the rock itself, but the name of a temporary waterhole near the summit.

It wasn’t until 1873 that the first non-Aboriginal person first set yes on Uluru. This was the explorer William Gosse who named Uluru Ayers Rock after the Chief Secretary of South Australia at the time, Sir Henry Ayers.

In 1985 Uluru was given back to the traditional landowners, the Anangu. The Anangu people signed an agreement to lease the park back to the Australian National Parks and Wildlife Service for 99 years. So the park is currently jointly managed.

When you visit Uluru, be sure not to restrict yourself just to the rock itself. There is plenty more to see, do and learn in the National park.

One part you really shouldn’t miss out is the Cultural Centre. This is a great starting point to a visit to Uluru as you learn about Aboriginal culture, the natural environment and how Uluru was formed. With many interesting displays, the Cultural Centre will help you make the most of your time at Uluru.

Entry to the centre is free and you will learn about everything Uluru has on offer. You can pick up guides here, buy souvenirs and book onto tours. Many of the stores here are run by traditional owners and you can buy local artwork from here.

A huge attraction of Uluru-Kata Tjuta National Park is the walks you can do. These walks give you amazing views of Uluru and the surrounding area. Some walks also allow you to get up close and personal with The Rock.

Ranging from short and easy strolls to extreme treks, there’s something for everyone. Two of the walks (Mala and Mititjulu) are wheelchair accessible and you can purchase a brochure for self-guiding on these walks from the Cultural Centre. All timings for walks are an average, some people walk quicker and some slower, some like to hang around to absorb the atmosphere or take pictures. It’s not a target – go at your own pace. Here are some of the walks you can try out:

A walk along a sand dune with views of both Uluru and Kata Tjuta. Here you can see the contrast in vegetation on the dune and the woodland towards Kata Tjuta. You may even see some animal prints. 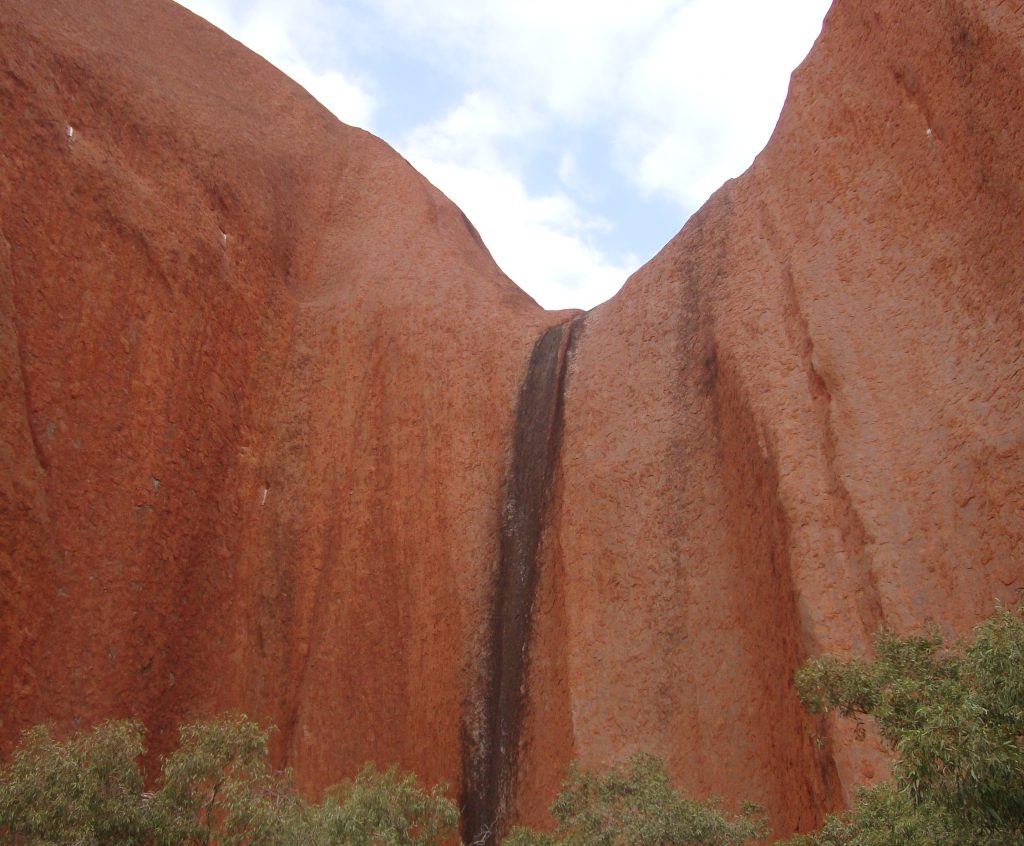 You can see many interesting features on the sides of Uluru

Where? The southern side of Uluru

This walk is available as a self-guided walk and is wheelchair accessible. The Mititjulu path takes you past rock art sites to a waterhole where you can see evidence of the battle between Kuniya (woma python) and Liru (poisonous snake man). 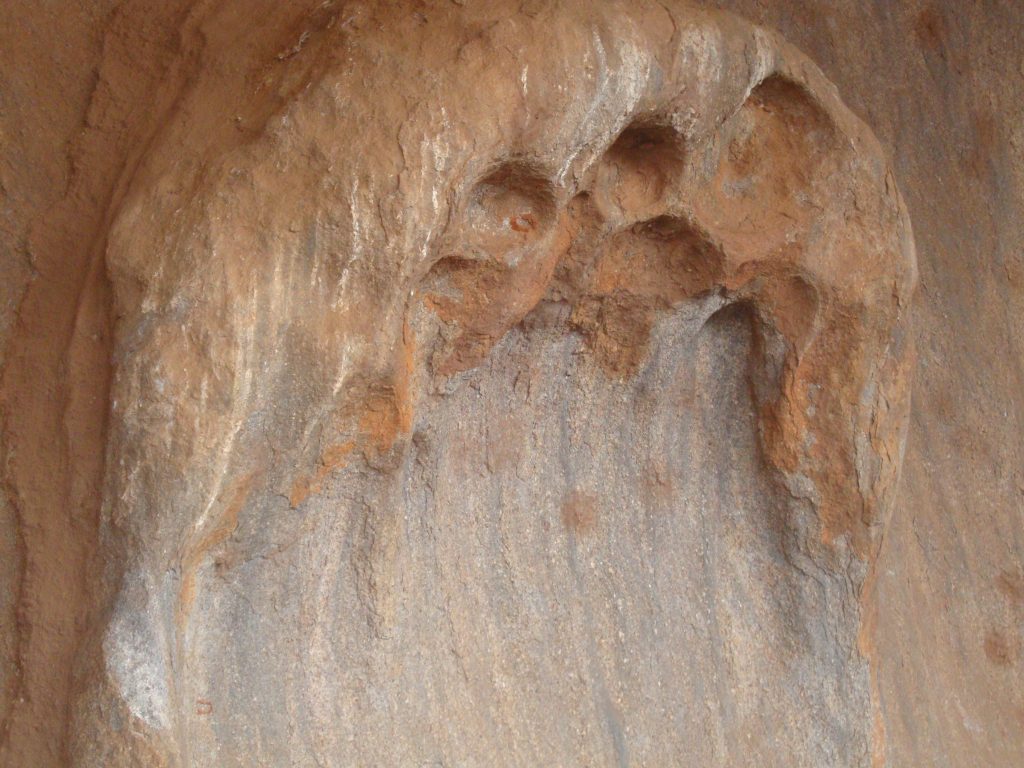 Weathering has created some features on the rock

Where? Mala Carpark on the north-west side of Uluru

The Mala Walk is also wheelchair accessible and available as a self-guided walk. This path takes you to the Kantju Gorge. You’ll pass strangely eroded caves, some used by the Ananju fairly recently, rock art and pools in the shade of desert oaks. Turn around when you reach the huge cliff of the Kantju Gorge.

Take the path up a gently rising slope with amazing views of the surrounding landscape. At the end of the Gorge, Spearwood vines can be seen.

Be aware that this is a culturally sensitive area, and as such, you should follow the advice on how to behave appropriately.

Valley of the Winds:

This is one of the harder walks as it is rocky, steep and difficult in parts. But the exertion pays off with amazing views and two great lookout points along the path. You can fully experience the beautiful landscape on this walk.

Be aware, this path will close if temperatures are too high.

Where? Base of Uluru

This track takes you around the base of Uluru and includes the Mala and Mititjula tracks. It is generally a quiet track so you shouldn’t bump into any large tourist groups. Along the loop, you’ll get a look at the variations in the texture and surface of Uluru as well as seeing more Anangu sites (but heed signs of closure). This path is walked in a clockwise direction. 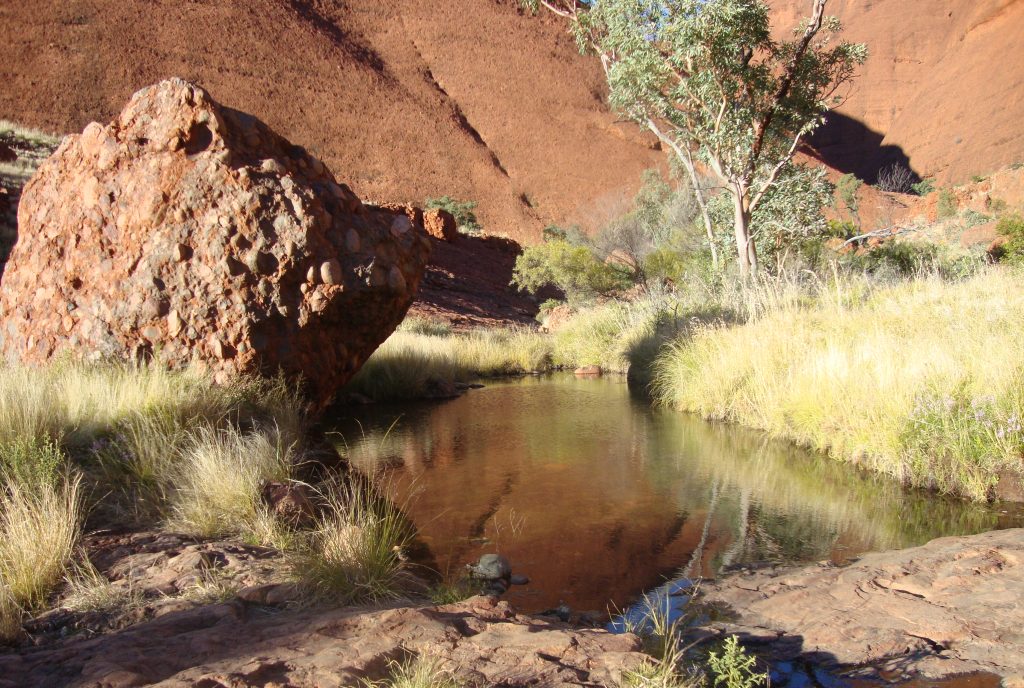 There are two types of guided walks you can take at Uluru, Ranger or Anangu.

The Ranger Guided walk uses the Mala track and so is wheelchair accessible. Allow 1.5 hours.

The Anangu Tours are called Kuniya and Liru walks. Anangu Tours are an Aboriginal owned enterprise. The guide will demonstrate bush skills, talk about their traditional lifestyle, bush food and Tjukurpa.

If you are visiting Uluru, you have probably heard about seeing the rock at sunrise and sunset to see the incredible colours of the rock. There are specific viewing areas to see Uluru during these times. Though these areas are likely to be crowded, they are still worth going to.

The effect of the atmosphere on the sun’s’ rays causes the rock to change colour. Any reflections from the sky and rock will enhance the already spectacular colours.

As the Uluru-Kata Tjuta National Park is a semi-arid environment, it is hot and dry, so it’s important that you look after yourself. It is also a natural and sacred place so you must respect the area. Here are some things to keep in mind when visiting Uluru:

How To Get To Uluru

Getting to Uluru is pretty easy, as it’s such a big attraction. There are loads of tours available to get to the National Park and explore it with a guide. For example, take a look at this 2 Day Camping Adventure.

Or why not book a big Australian adventure to make the most of your time there? Check out this 12 Day Tour that includes a few days in the outback and Uluru.

You can also stay in Alice Springs and take half-day and full-day tours to explore different areas of the National Park.

Visiting Uluru Without A Tour

If you do not want to take a tour, you can see Uluru on your own. Though to see it all without a guide you will need to rent a car. It’s a straight road up the centre of Australia to get to the National Park, but it is a very long drive. You can also get a greyhound bus or the Ghan train. But once there you will need either a tour or car to get around as there are no taxis or public transport in the park.

Uluru is a must-see for any Australian trip

Whatever you choose to do during your visit to Uluru-Kata Tjuta National Park, you’ll still feel like you haven’t seen it all. Exploring the park, only whets your appetite for the place, and doesn’t satisfy it. I spent three nights here with a Groovy Grape tour, and I still feel that I didn’t see enough of the place!

Make the most of your time at Uluru and do what’ll give you the best experiences and memories. Just ensure you do it safely and respectfully, remember to take only pictures and leave only footprints. That way you and the Park itself will be there when you realise you need to see it again and do more there.

Want to visit? You can find accommodation in the nearby town of Alice Springs on Hostelworld. 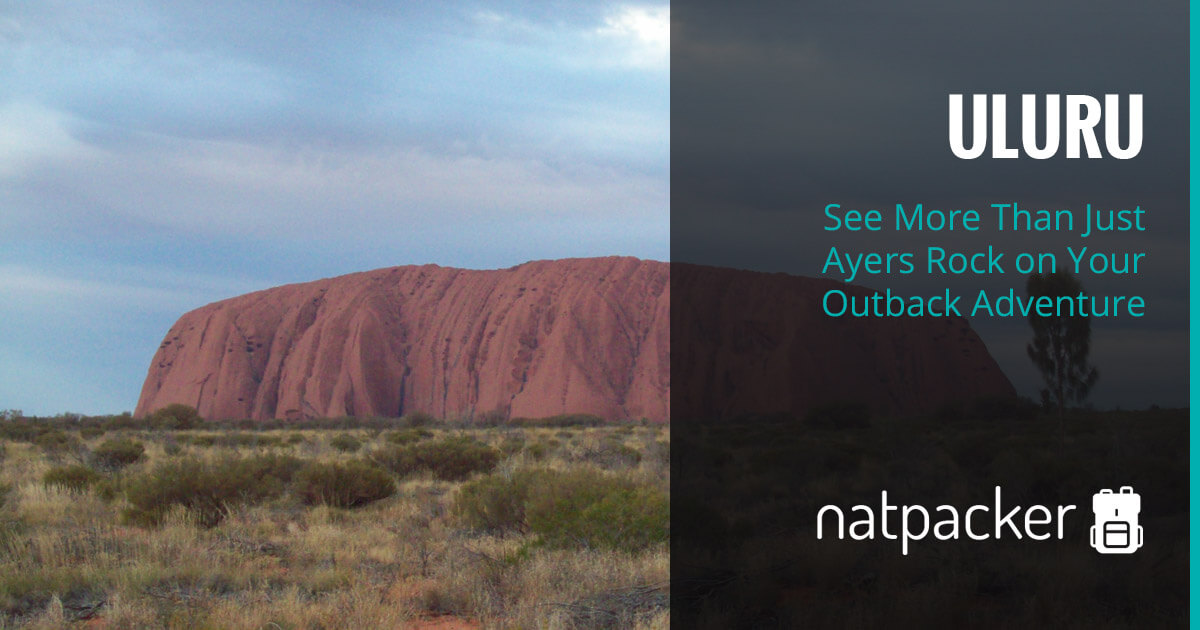