New Year’s Eve in Stuttgart – the second day of my Stuttgart Adventure! The group has a lazy morning before heading out to see some sights, then it’s time to join the revellers welcoming in 2017.

We all slept soundly in our AirBnB, too soundly in fact… And the blinds were far too good, they let no light in whatsoever! When me and Dave stirred we thought it must still be early morning, until we checked the time and it certainly wasn’t! It was around midday! Oops! We didn’t mean to have such a lie in!

After we were all ready, we decided to head to the TV tower, where you are meant to get great views of the city. But it being New Year’s Eve, we decided to go via a pub that I had found out about – Palast der Republik – a bar in an old public toilet. I always seem to find the old public toilets converted into something else… It’s a skill…

The bar was much closer than we’d thought and we were there within minutes. But is was shut! There was a notice on it and since none of us could speak German (other than a few polite phrases) we obviously couldn’t read it. Then we discovered the magic of Google Translate! I never know you could just point your camera at it and Google would, roughly, translate. How awesome! So we managed to figure out that the bar was closed until that night, when it would be open for the last time before refurbishment… So drinks would be going cheap! We made plans to come back later… 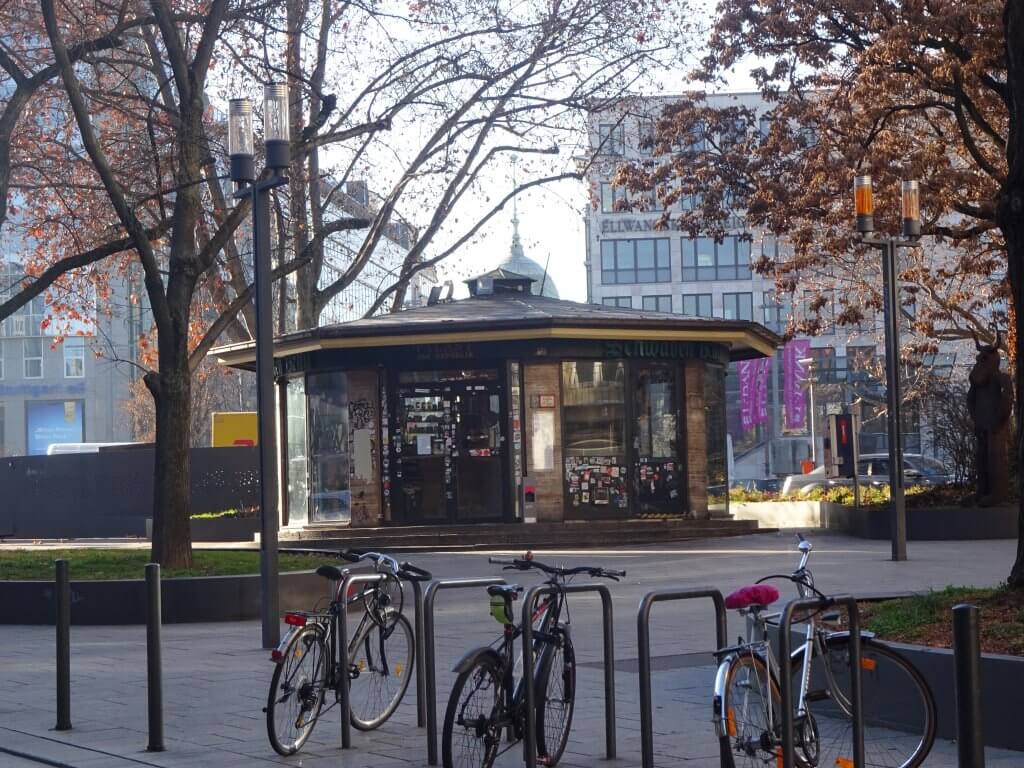 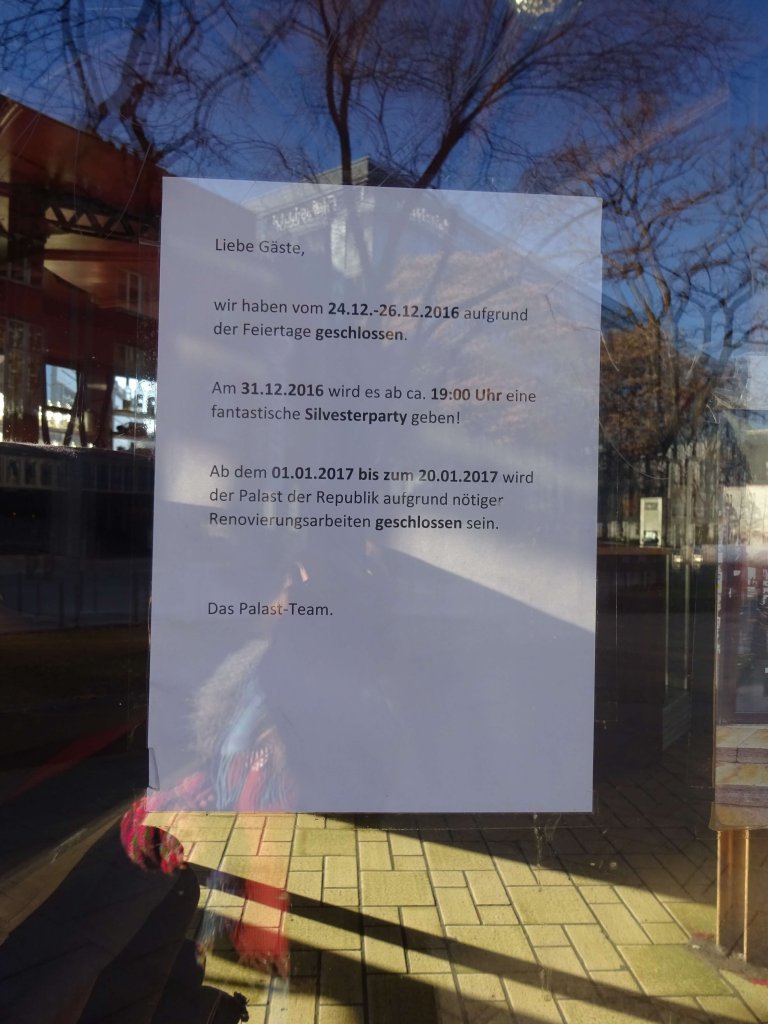 The Fernsehturm (The TV Tower) is a little under 4 miles from the centre and as it was afternoon on New Year’s Eve, we figured it wouldn’t be open late, so we took the U-bahn. We went through the city and wound up and up the hills to the south. It was quite steep, so probably would’ve taken a while to climb!

We got off the tram and followed the path to the tower. Luckily there wasn’t much of a queue, so we got up pretty quick. I was little disappointed with the lack of information around the place, but the views were worth it. (Although the Mercedes Benz Museum was overall MUCH better value!) It was a lovely day, so you really could see for miles. 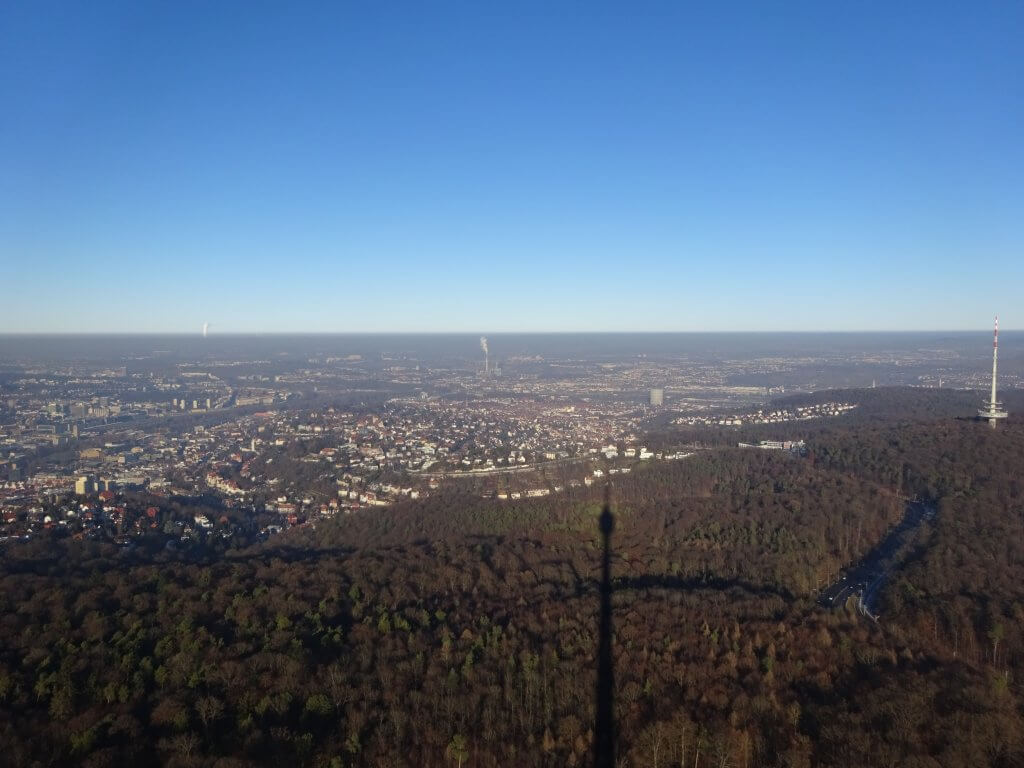 My Favourite View From The Fernsehturm

As we left the TV tower we decided to head to a different station. We also had decided to get off a few stops early, so we could try and find the Castle, as apparently that would be where all the action would be that night. 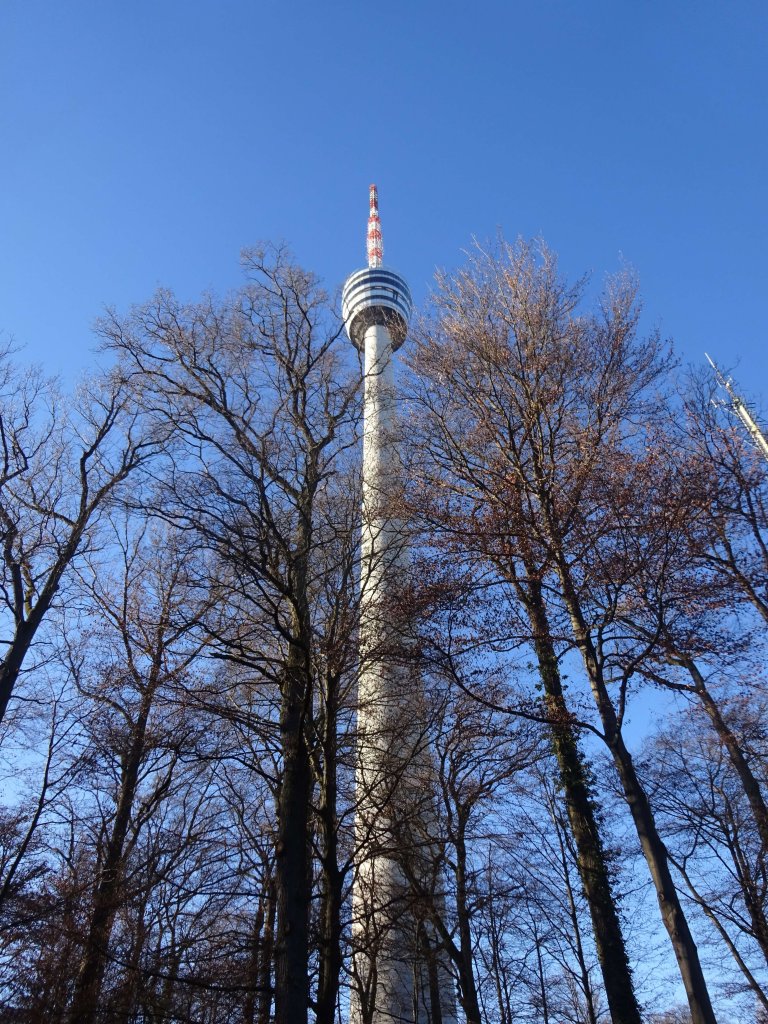 We got off near Karlsplatz and generally wandered around getting lost! Ironically, we walked round the castle without realising it was the castle! But there was a cool statue of Emperor Wilhelm von Rumann, whoever he was! There was no real information! But I get the feeling he was someone, as there were lions surrounding the statue… 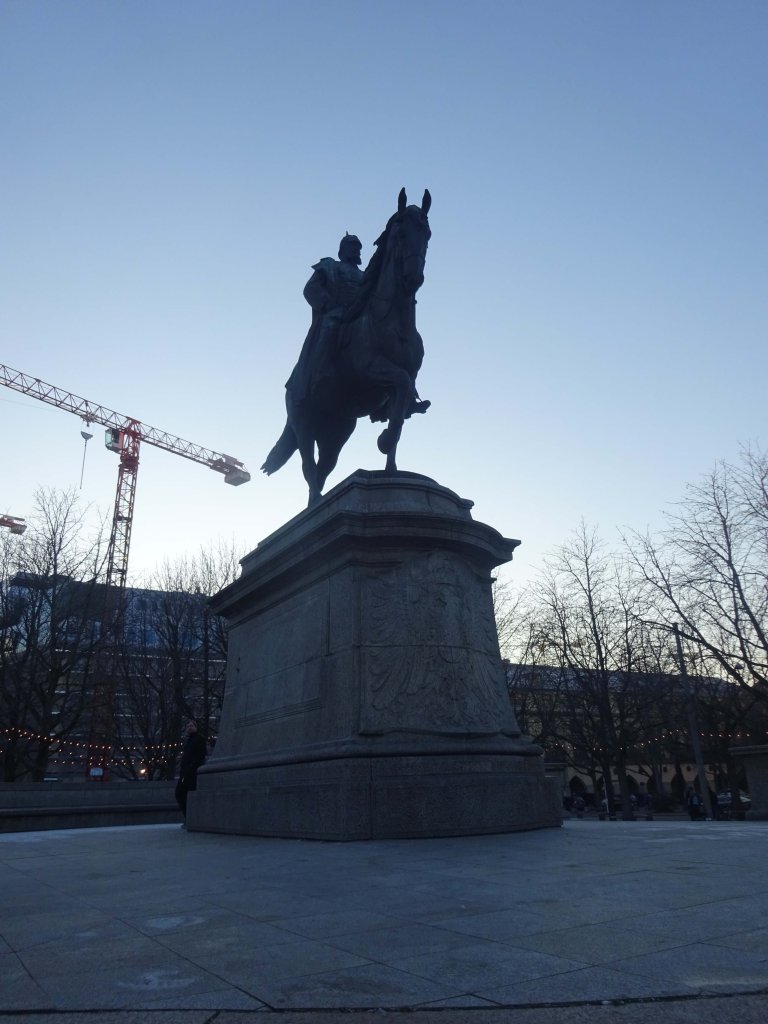 The church, Stiftskirche, was also very pretty. And the time of day we were there, made a very pretty scene. Unfortunately it was closed when we went past, so we could only admire the outside. 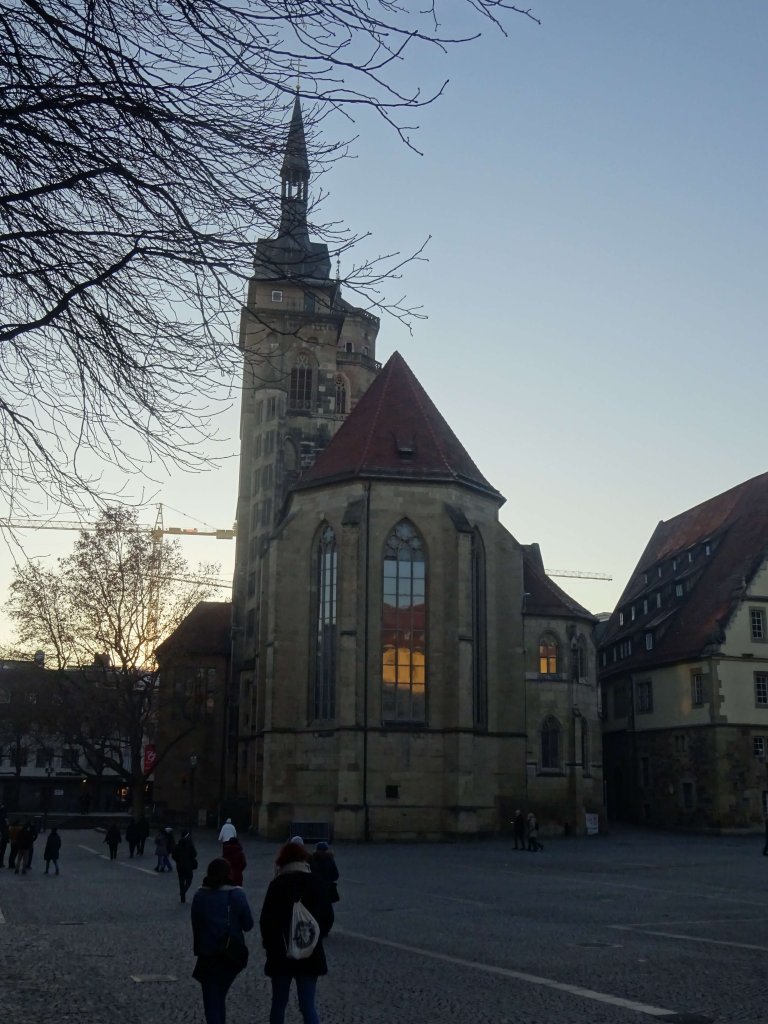 There was still plenty of time left in the day, so we decided to go for a drink before getting ready for the new year celebrations. We struggled with this mission. Seriously, every pub and bar seemed to be shut! We couldn’t understand it! But finally, we stumbled upon a ‘cocktail’ bar that had just opened. There was not a cocktail in sight. Spirits, yes, but no cocktails.

As we were drinking and chatting there was a music channel on the TV. And this is where we made the best discovery of the trip! A song came on called “Holz” by the 257ers and OMG! It was amazing! We have been obsessed with this band since, even though none of us knows what they are singing! Seriously, they are awesome!

After our drink we headed back to the AirBnB to get ready for a night out (and look up some gluten free places to eat). As we were getting ready we basically played as much of the 257ers back catalogue that we could find! Seriously, obsessed!

Our first stop on New Year’s Eve was the same as the morning… Palast der Republik. And this time it was open! It was an awesome pub, and the Gluhwein was amazing! One of us accidentally ordered honey water, and although that was not alcoholic it was still very nice! 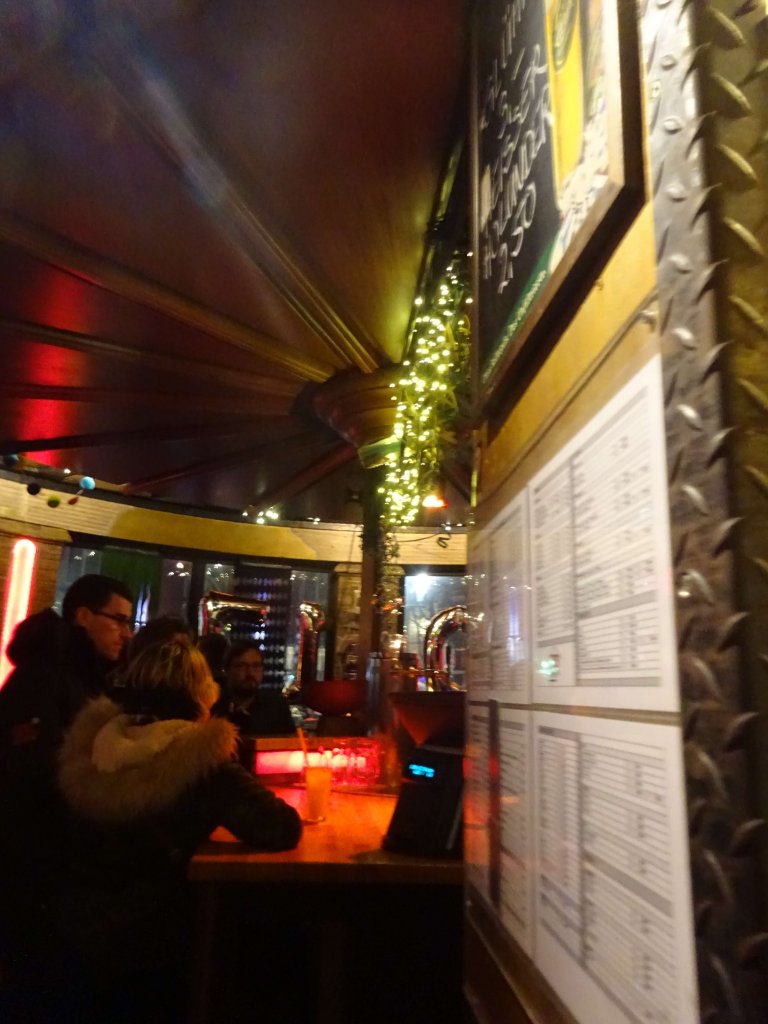 After a drink we headed out to find some food. We’d looked up a nearby Italian restaurant that catered for gluten free. It was called Vinolio. When we got there they were fairly busy, but they were lovely and made room for us. They only had a small menu, understandably, but there was something Bridget could eat with her dietary requirements!

I had the Ravioli. As the menu was all in German I think it was stuffed with spinach and courgette with cream and thyme. It looked like a very small meal, but it was surprisingly filling! And it was absolutely gorgeous! 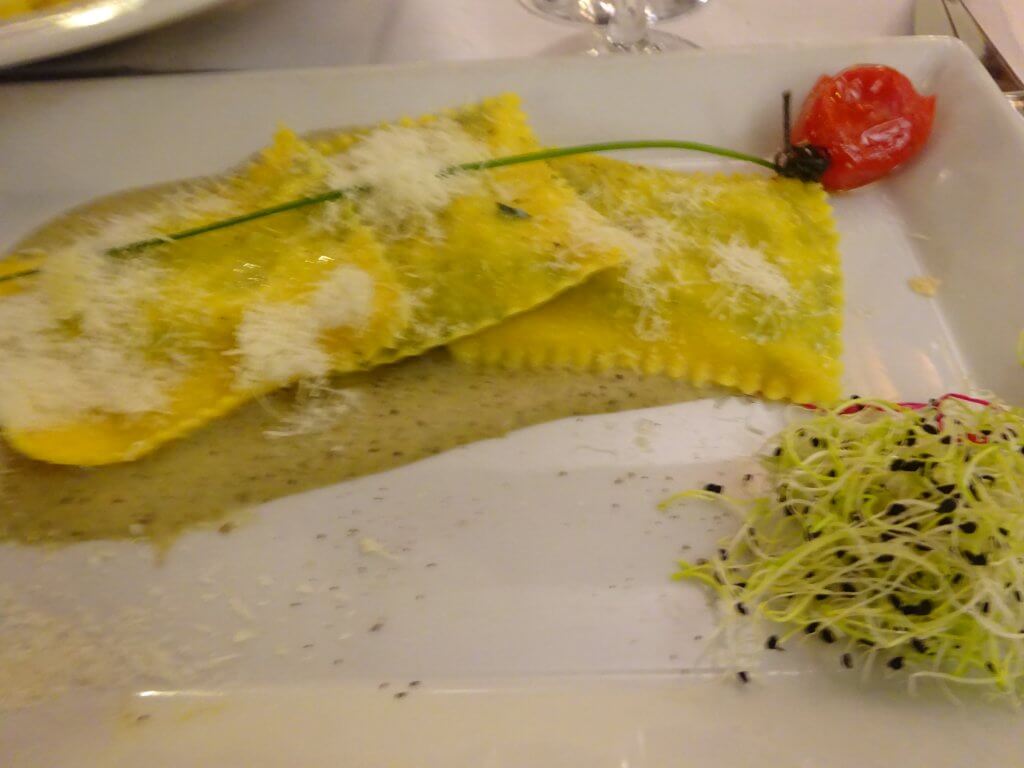 Ravioli In Vinolio, I Was Surprised At How Filling This Was!

After the amazing food we headed towards the castle. At Jubiläumssäule Square, we found all the revellers… And I mean ALL the revellers! It was crazy! People had literally brought fireworks and booze here and were just letting go. Literally.

Jubilaumssaule Square, Where The Party Was

Fireworks were lit and held above heads until they were let go at the precise moment where they (mostly) flied into the air and exploded. Some went a little wrong, so we had to dodge a few stray fireworks! But it’s all fun! Me and Dave ran round like crazy, enjoying dodging the fireworks and watching people let them off! I got hit by a couple on my leg, and I must say it was not as bad as my mother warned me when I was young! 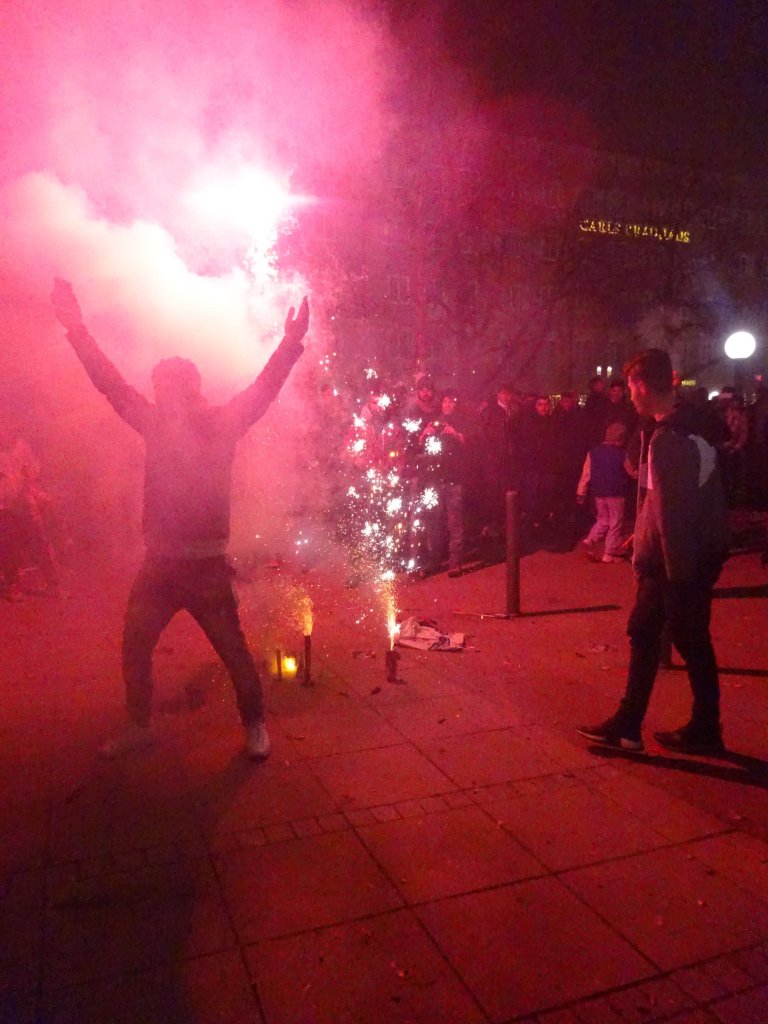 Someone Was Enjoying The Celebrations! 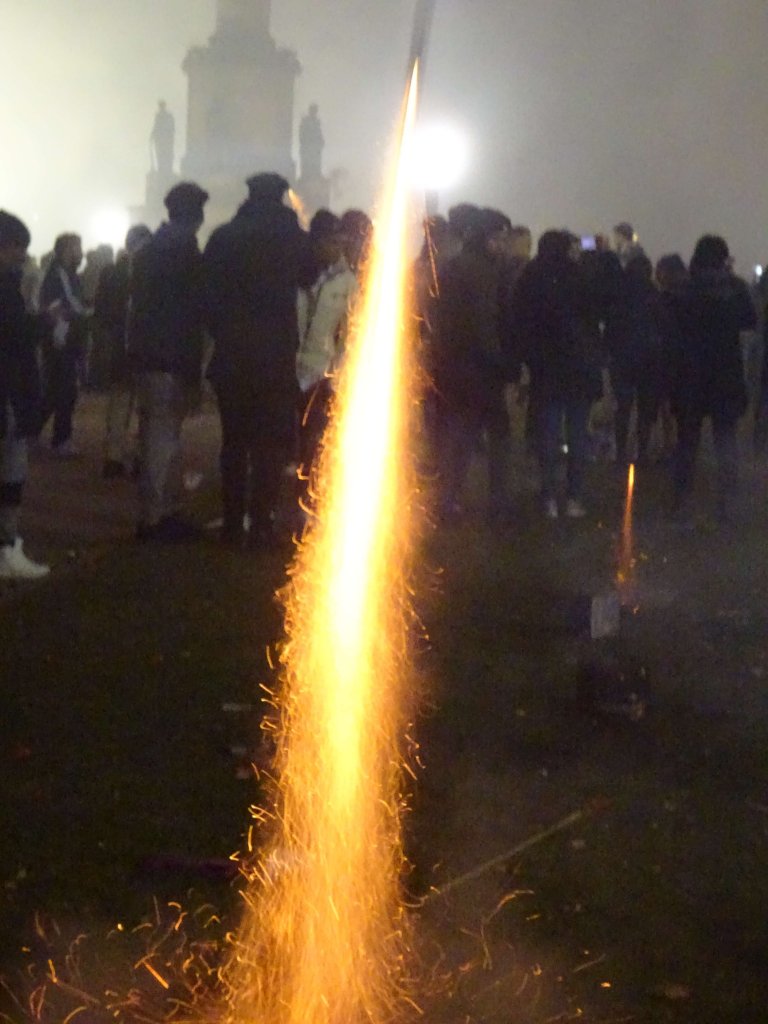 Close To The Action

There were police surrounding the square, keeping it all contained. But there was no trouble at all. Everyone was happy and having a laugh. If you got hit by a firework the person who let it loose would rush over to check you were ok.

We were having so much fun and the fireworks were so constant that we didn’t even realise it was midnight! About fifteen minutes after midnight the crowd started to disperse, that was when we realised that new year had come and gone! At this point we ended up in one of the fountains (which had been emptied) chatting to some other tourists. 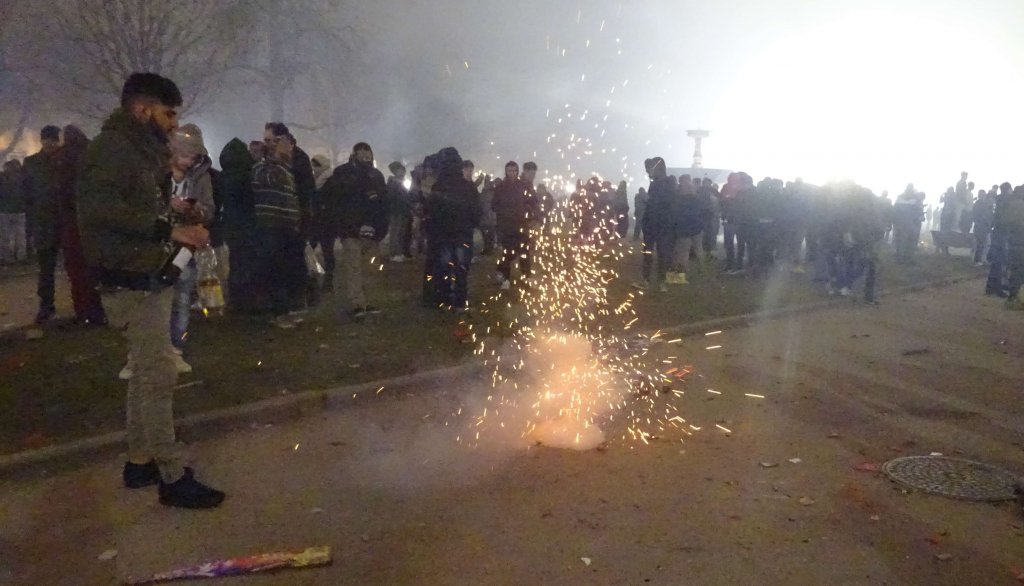 A Firework That Went Wrong 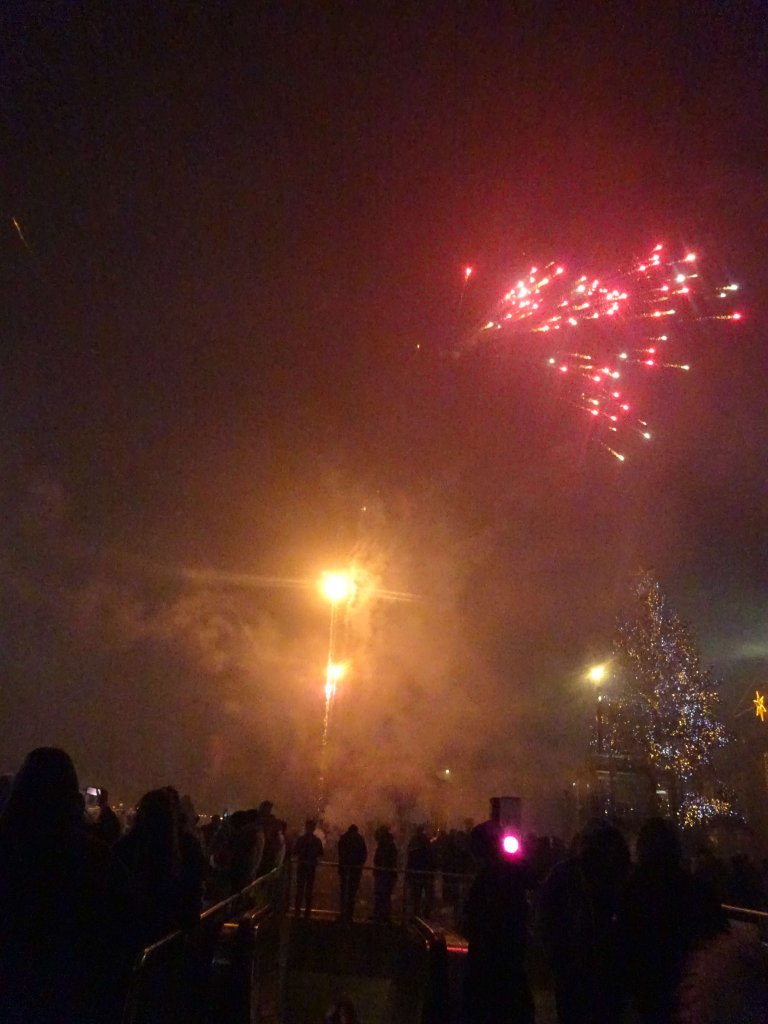 And It’s All Over

This was seriously one of the best New Year’s Eves I have ever had. And even better, it was completely FREE! I would love to start this going at my local town square, but think I’d actually get arrested pretty sharpish… We’re obsessed with Health and Safety in England! 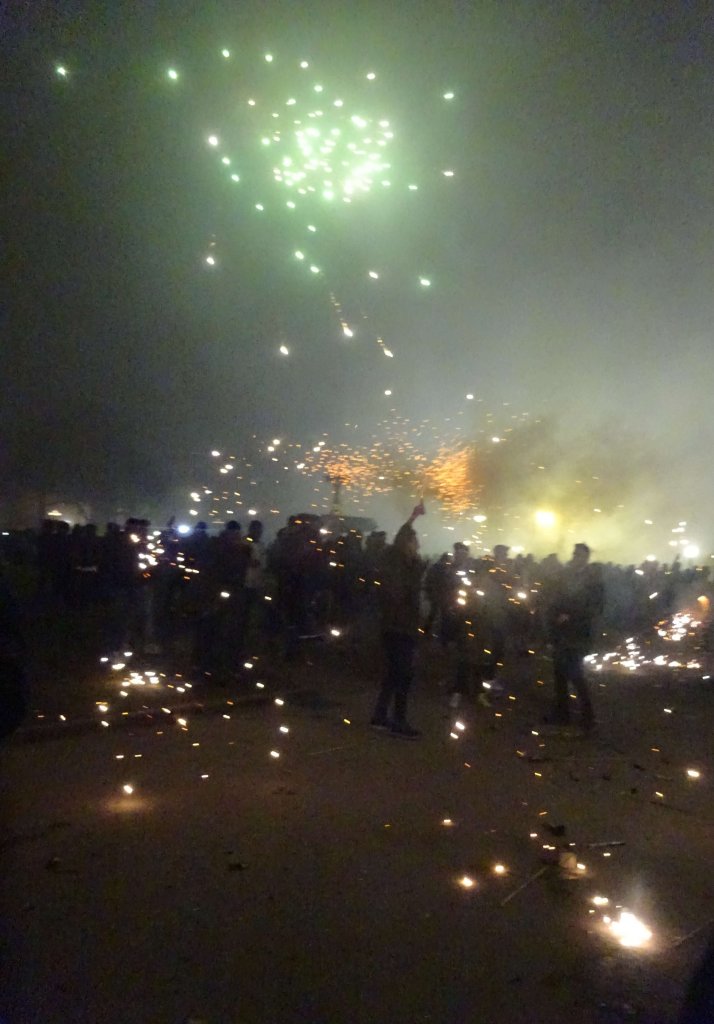 So, under the smoky (it possibly was starry, but this could not be seen), we left the square, leaving the last few revellers. The fireworks had finished, only the smoke was left. So we went to find a drink. We soon stumbled upon Palast der Republik again and since it was still open, we headed in. And that was were our night ended. 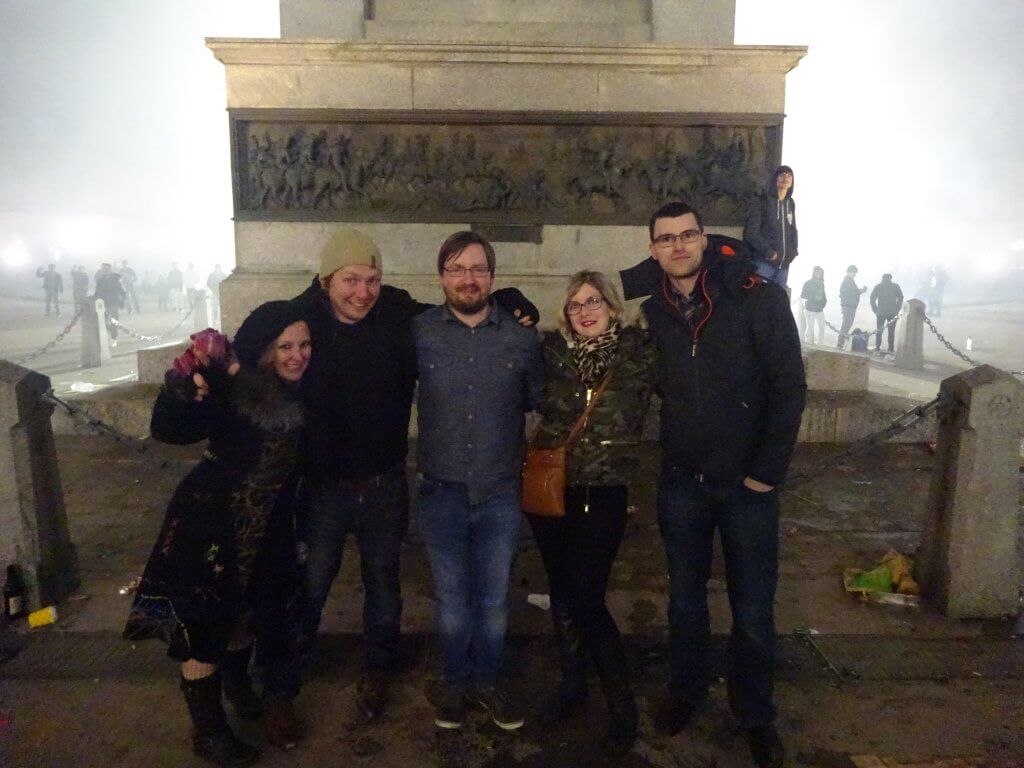 The Five Of Us At Jubilaumssaule Square

Don’t worry though, that’s not the end of the adventure! Go to Day 3 for the next instalment! 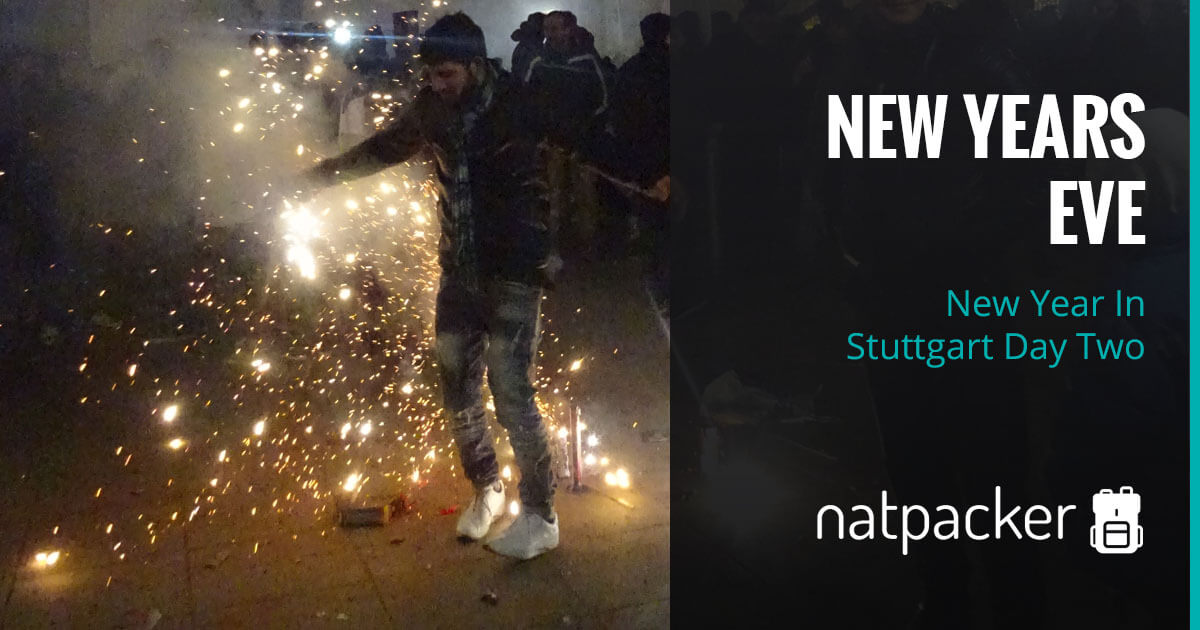