1. Thinking That Those Who Don’t Speak English Are Just Wrong

Alright, maybe it’s not thinking that non English speakers are ‘wrong’ I’m being a little harsh! But when you go to a country where English is not the first language, don’t be surprised when you meet people that can’t speak English! If you want people to speak English, maybe go to an English speaking country? And, did you know, shouting English doesn’t make it any easier to understand? (Seriously, I never understand when people shout English to make it ‘easier’).

Respect the country you are going to, and the locals. Why not learn the basics, like ‘hello’ and ‘thank you’ in the language. People are much happier to help if you’ve made the effort! I tend to find those people that expect every person in every country to speak English are also those who will moan about people not speaking English in their own country – you can’t have it both ways!

If you’re from the western world you’re probably used to dressing exactly how you like. However, many countries have strict rules on clothing (especially at religious sites). It is important that you respect these rules and cover up where necessary.

Wearing the wrong clothes is just disrespectful of the country’s beliefs, plus you give a bad first impression and stick out like a sore thumb! Adhere to local customs and seasonal needs, it shows the locals that you actually care!

There’s nothing wrong with drinking and having a good time, but you can go too far! If you get too drunk in your own country, you’re just a ‘drunk’, in other countries it’s worse, you’re the ‘drunken tourist’! It makes people rethink what benefits tourists actually bring!

I’ve even known some backpackers who had no money for food, but could afford a six pack of beers (always English I’m afraid to say…) I don’t understand this. Surely you want to experience more?

I HATE this. There is absolutely no need for it! On Australian and Kiwi bus tours I went on, the guides were obsessed with the phrase “Take only pictures, leave only footprints” and every responsible traveller should abide by this. Don’t even take a pebble! It’s one of those things, if everyone did it, there’d be nothing left.

And don’t litter. Biodegradable and fag ash included. Use an old film pot or similar to knock your ash into. And just because something’s biodegradable, doesn’t mean it’s ok to drop it. Would you naturally find a banana skin on the Isle of Skye? Who knows what damage that could do to the ecosystem, there could be a microorganism that has the potential to wipe out heather. There’s no knowing!

Basically, leave every attraction, every beautiful view point exactly as you found it. Leave it for future generations to enjoy.

5. Taking Photos When You Shouldn’t

Another one that REALLY winds me up! If there’s a sign that says ‘no pictures’ then don’t take pictures. Why do some travellers think rules don’t apply to them? And it’s not language, because normally there’s a picture too!

If there is a sign with a picture of a camera and a line or cross through it, it may mean ‘no flash’ or ‘no pictures’. If in doubt, presume it means ‘no pictures’ (even if others around you are taking pictures), to be on the safe side. Have memories instead of pictures. Some people are so obsessed with looking at everything through their camera that they don’t actually see anything!

Travel snobs miss out certain things because they are ‘too touristy’. But really, what is a visit to Paris without a trip up the Eiffel Tower? Yes, somethings are very ‘touristy’, but worth it! Even the beaten path is better than no path! What’s the point of visiting somewhere if you decide it’s all ‘too touristy’ and spend all your time in the hostel? You might have well stayed at home…

Now, I don’t mean people with allergies. Those with allergies tend to be more careful and know, if in doubt, don’t eat out. It’s those that are on a ‘special’ diet  (and not because of an allergy) and expect undeveloped countries to abide by their rules. These people don’t have the privilege of being able to be fussy! So don’t rub it in and don’t expect to be able to stick to your diet. Research where you are going and be aware you may have to either give up your diet for a bit, or cook for yourself.

If in doubt the locals can meet your requirements, buy your own food and cook in the hostel. You may end up spending more money in a underdeveloped country, but at least you have the funds to be privileged with being fussy!

So, the main things that annoy me is when travellers seem to lack respect for the local culture and customs, or when they think rules don’t apply to them. When travelling, whether you label yourself as a tourist, backpacker or traveller, always be polite and respectful. Whether you’re a pro traveller or new to it, don’t give all the tourists a bad name!

These are my travel pet peeves, please feel free to disagree/agree! And any opinions are welcome! 4 and 5 are the ones I really can’t stand people doing! 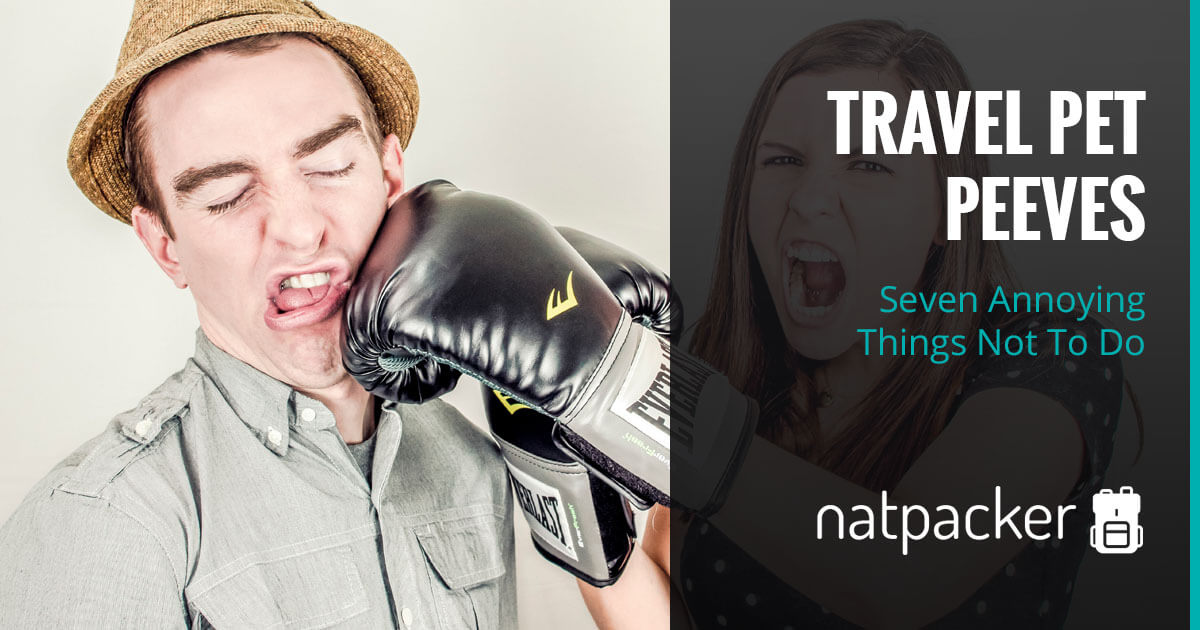