Stirling might not be as popular as Glasgow or Edinburgh, which it sits between. Many people just do a day trip from one of the bigger cities, but when I came here on my Honeymoon, I decided that I had to come back. I stayed for two nights, which gave me plenty of time to explore. There isn’t a massive choice of accommodation, so it’s not hard to choose. Though this always worries me as a lack of competition tends to mean standards don’t stay high. There are certain things I look for in a hostel, but when there’s not many to choose from, it can mean that hostels don’t go above and beyond. I stayed in the Willy Wallace Hostel during my time in Stirling, and it turns out I had no need to worry.

Disclaimer: I was hosted for two nights in the Willy Wallace Hostel, in exchange for a completely honest and unbiased review. Therefore all opinions are my own and are not influenced.

About The Willy Wallace Hostel

The Willy Wallace Hostel in Stirling is the only backpacker hostel in the city (at time of writing). It is an independent hostel, which boasts friendly, spacious and clean facilities. Their website boasts a range of facilities available and states that it is in a great location. 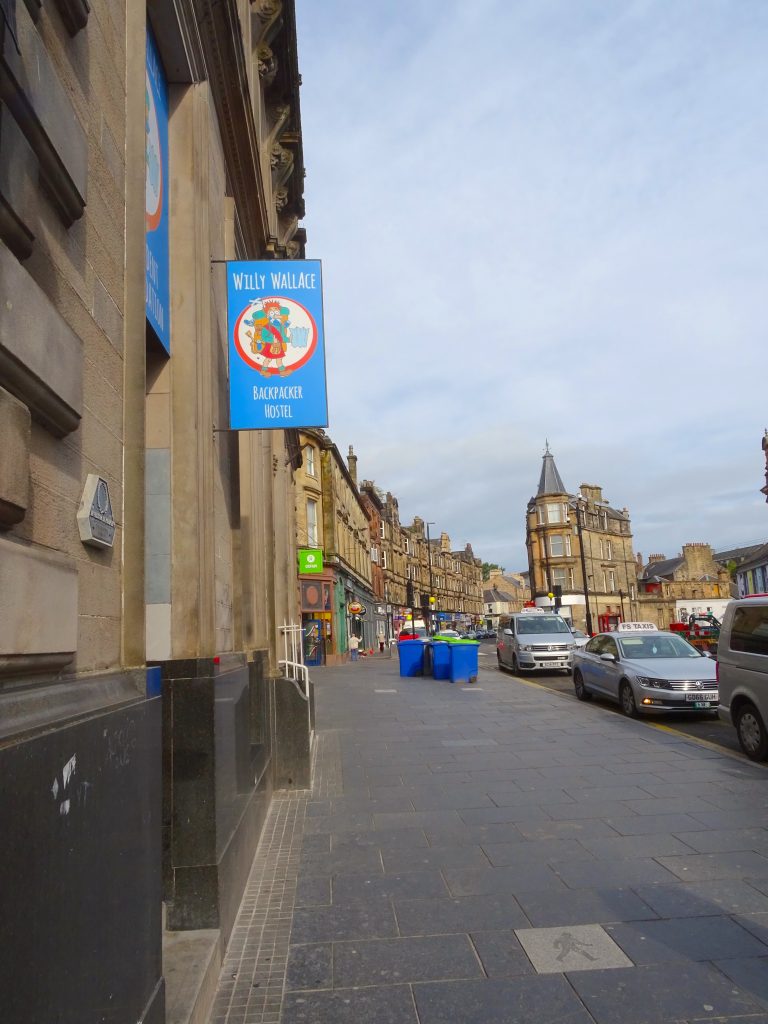 Rooms range from dorm rooms (up to 18 beds) through to private twins and doubles. The dorms include same-sex and mixed. Bathrooms are shared for all rooms.

The hostel is in an ornate Victorian building and was set up in 2000. Many websites say that Willy Wallace is gaining a reputation for being one of Scotland’s top hostels. 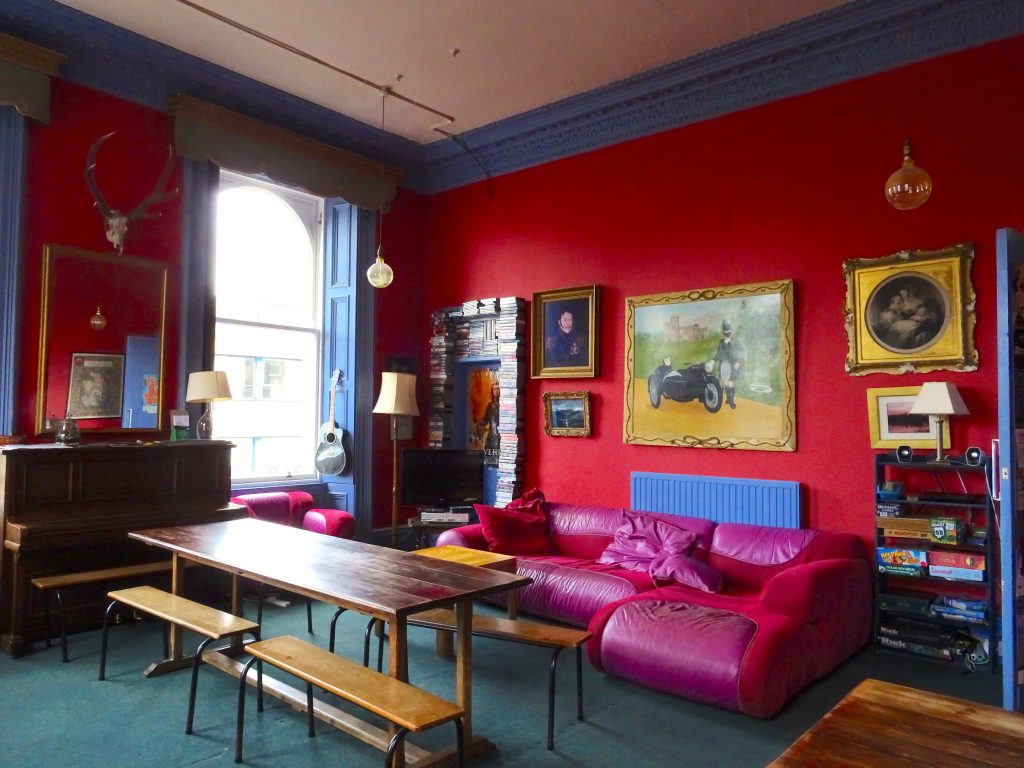 The Common Room At Willy Wallace

My Review Of The Willy Wallace Hostel

During my two nights in Stirling, I stayed in a 6-bed mixed dorm with shared facilities. The showers and toilets were literally across the hall and the bedroom on the second floor of the hostel. 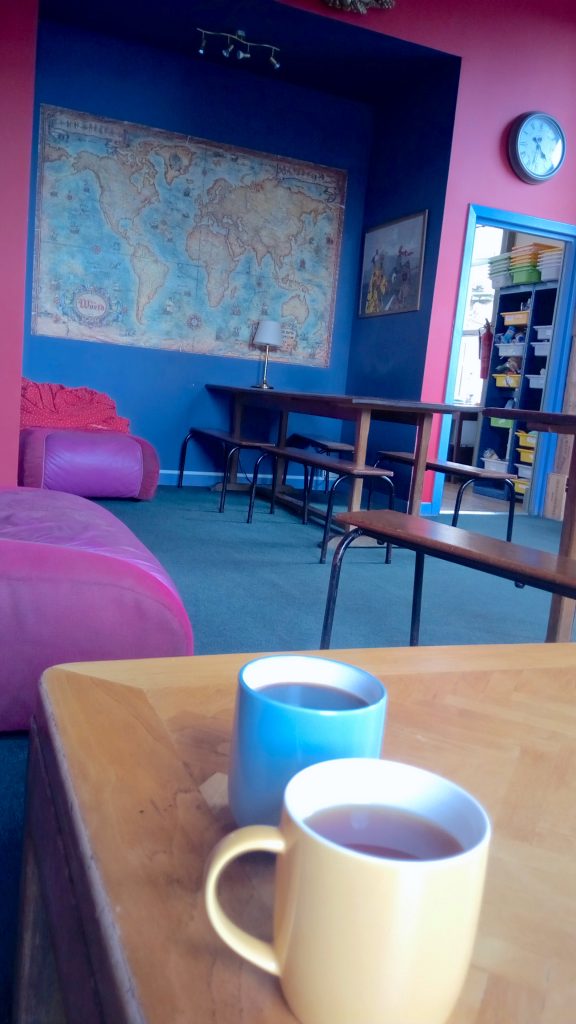 Stirling is quite a small city, so it’s pretty hard to have a bad location. Willy Wallace is just a couple of minutes walk from the train station and about a ten-minute walk up to Stirling Castle. Not far from the main street, the hostel is close to bars, pubs and cafes. The nearest supermarket is a couple of minutes up the road.

As the hostel is not on the ground floor, it was quiet, despite being on a fairly busy road. Upon arrival, the hostel was easy to find, as the sign was easy to spot. 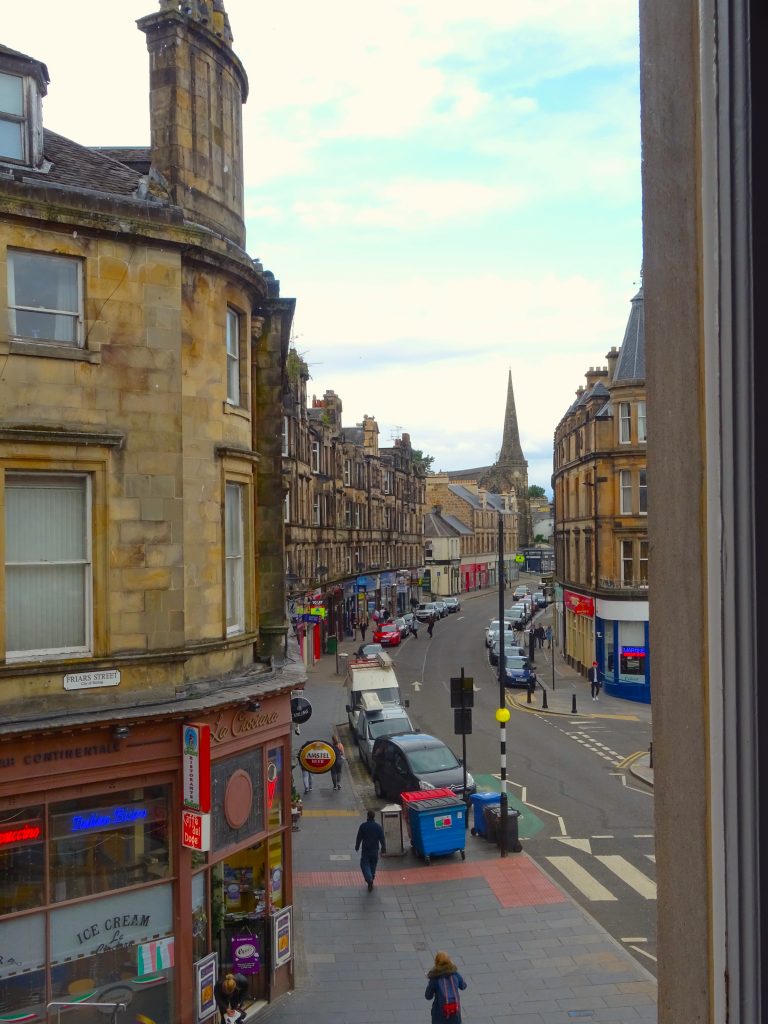 The View Of Stirling From The Common Room

Clean and spacious facilities were a constant in this hostel. The six-bed dorm didn’t feel cramped, there was plenty of space for all. The beds were comfy too.

Common areas were once again clean and spacious. The kitchen was well stocked and free tea and coffee were constantly available. In the common room, there were also instruments, DVDs and board games. The common room was well laid out with sofas and tables, so you could chill out or have a meal. The wifi also worked really well, which is a nice surprise in a hostel. 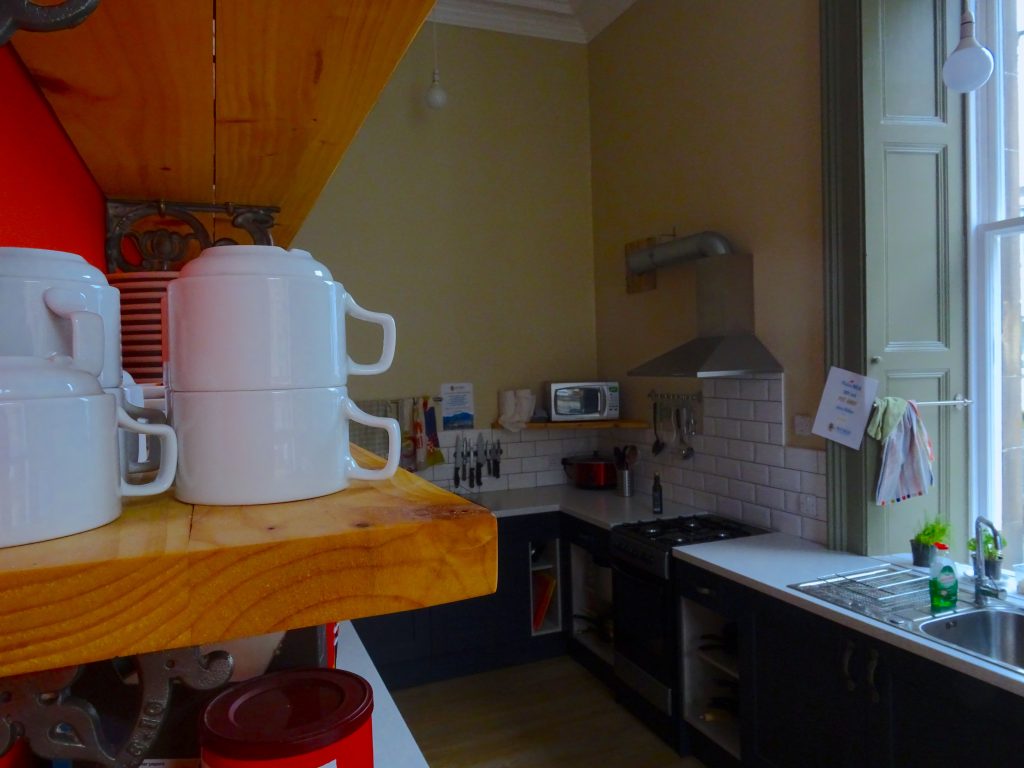 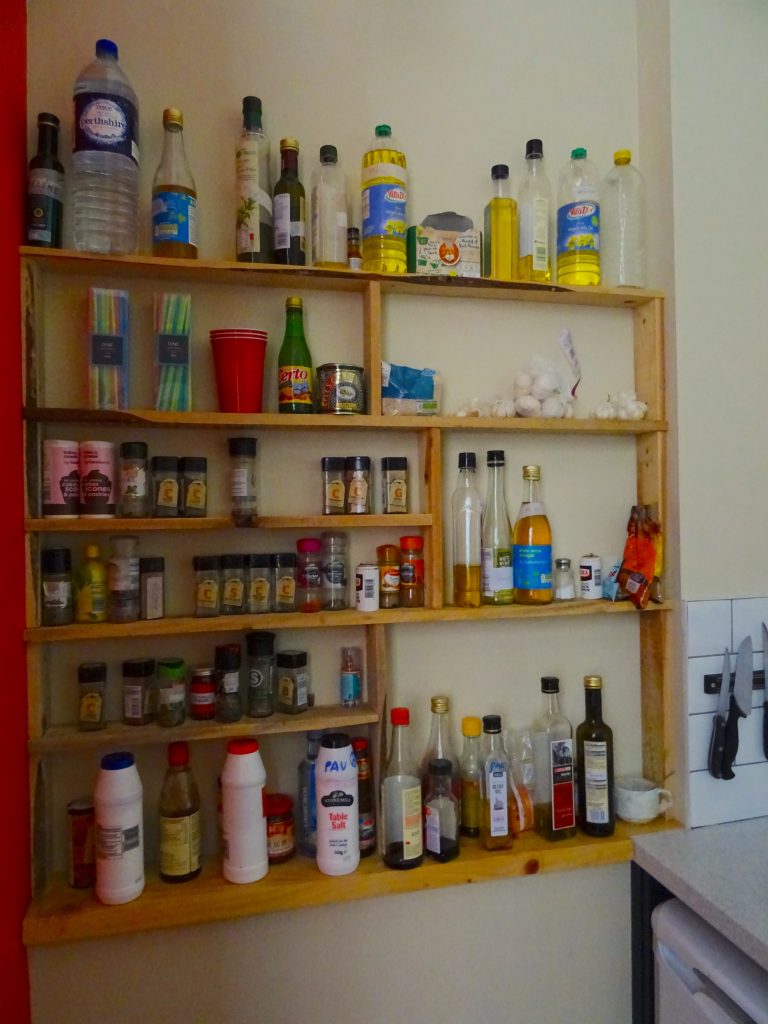 The Kitchen Had Plenty Of Spices Available

There is also luggage storage, which is free, plus laundry services (that comes with a charge). The hostel also provides maps and a walking tour (unfortunately I did not have the chance to do the tour).

My one negative is that there is a charge for breakfast. This seems to be the thing in UK hostels. It is only a minimal charge, but personally, I would prefer breakfast to be included or not. Also, the breakfast was fruit, cereal and toast, even if I’m only paying a minimal fee I like to have something a little special for my money. It’s easy to get a much better breakfast for just a couple more quid. 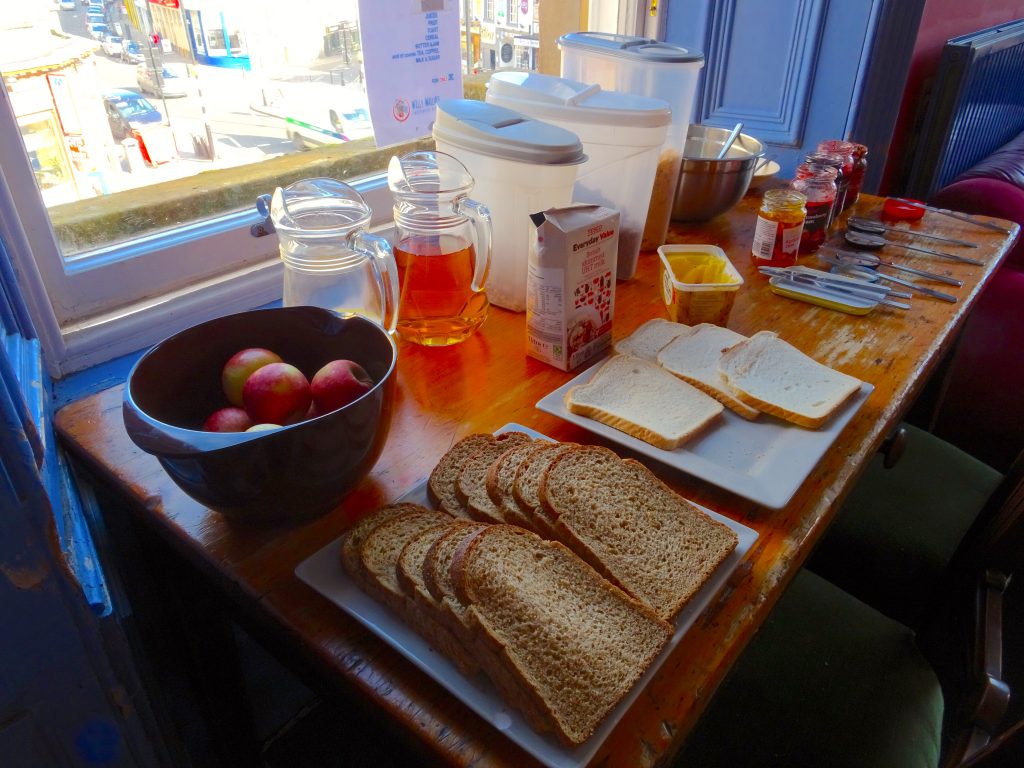 The staff here were brilliant. Our train was delayed, which meant I got to Stirling past reception hours. The woman on reception stayed around for us, even though it was past 10 pm that we arrived. She then even invited us out with the staff.

All the staff were friendly and happy to help with any queries. They were very attentive and lovely to chat too. 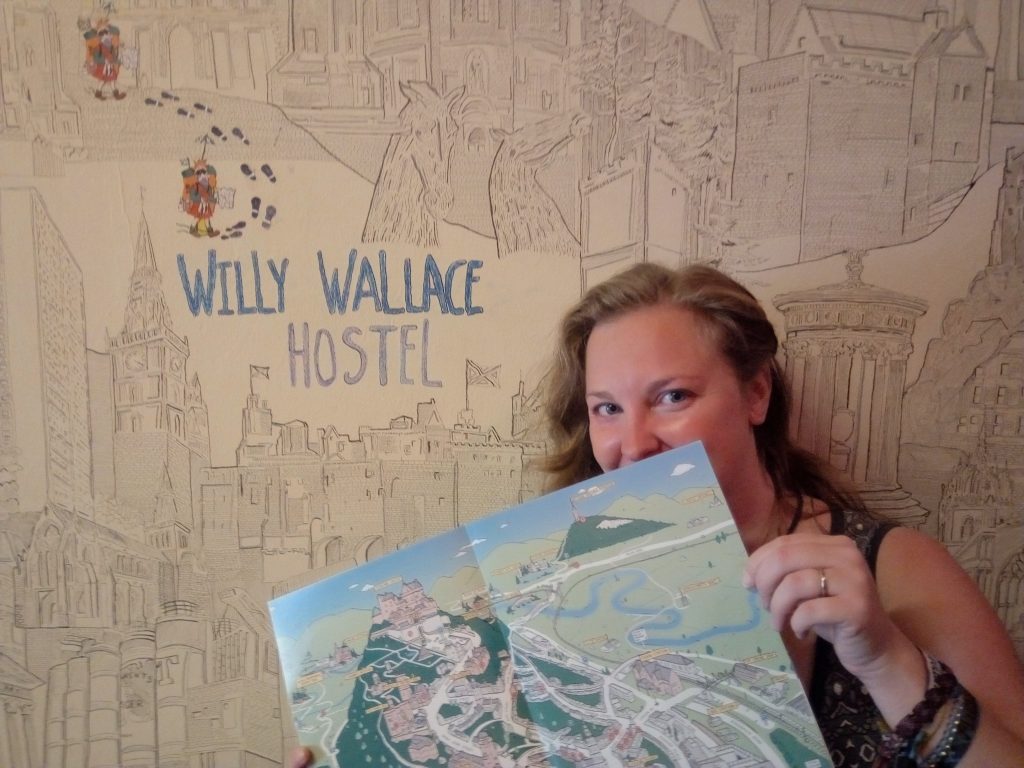 Brilliant location, friendly staff and great facilities. The hostel was clean, the bed comfy, the rooms spacious and the building beautiful. I really can’t give Willy Wallace any less than a five.

My only gripe is the breakfast situation, but as it seems to be the thing to do in UK hostels, I can’t really take from the overall score because of it. I think that it’s just my personal opinion here, but I would prefer hostels to either provide breakfast or not.

With a lack of competition, I am very impressed that the standards here have not slipped. I have seen this happen in other places, so was very happy to find this hostel so well equipped and cleaned. 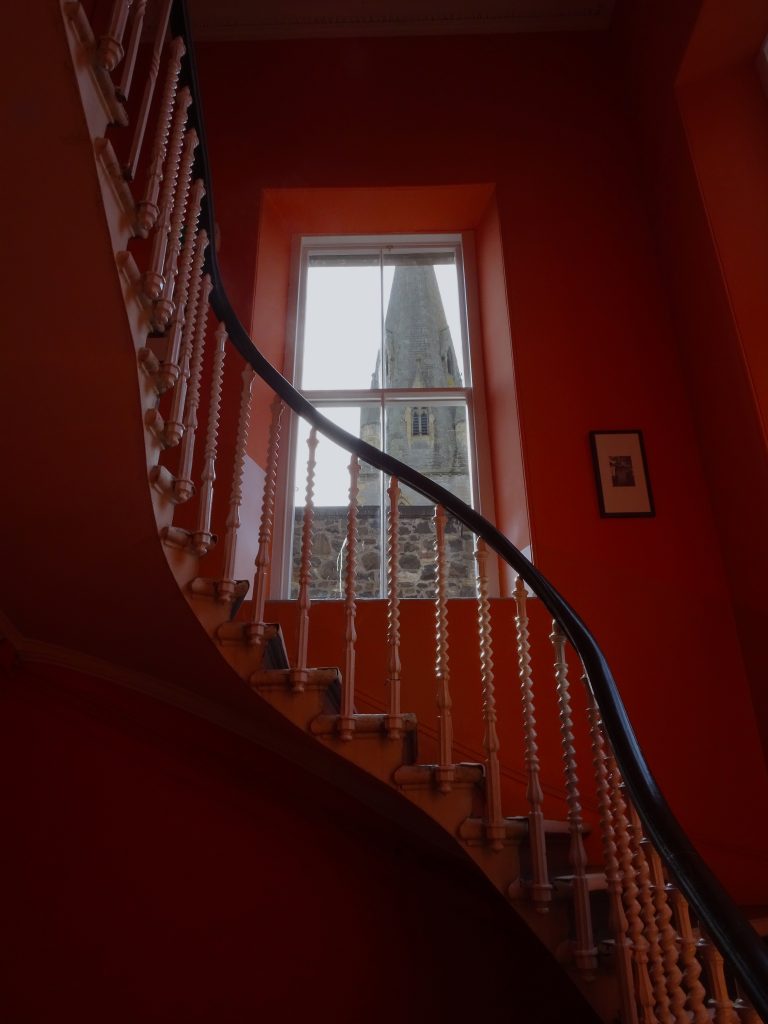 Even The Stairs Have A Great View

If you’re heading to Stirling you can book the Willy Wallace Hostel with HostelWorld here. 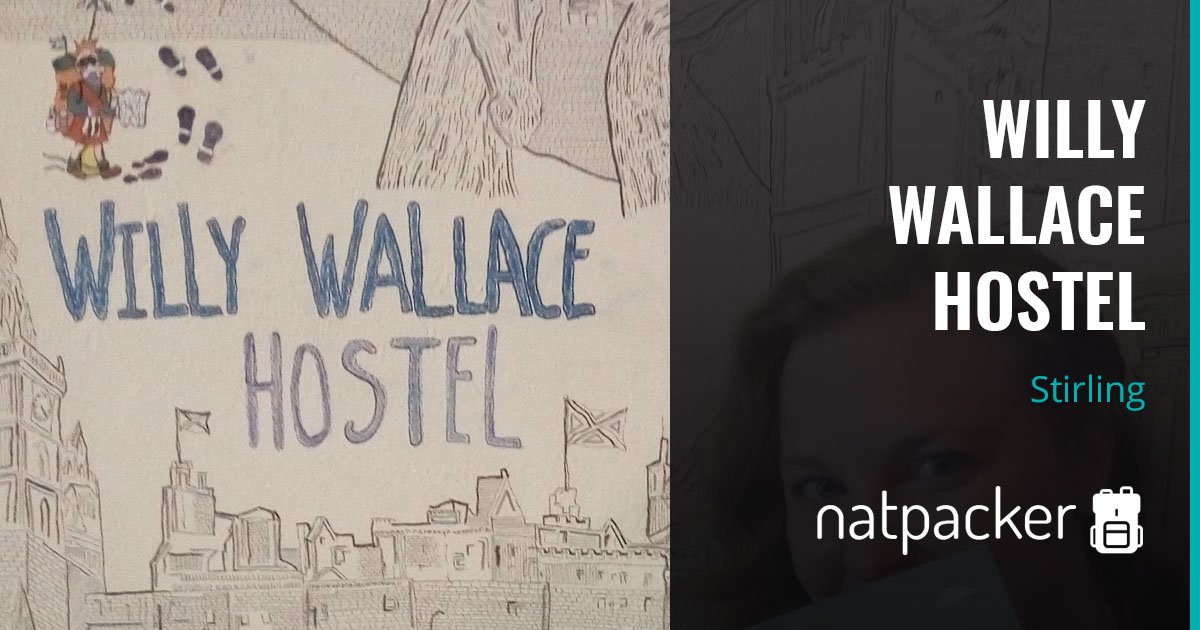