The Bremen Musicians statue is located in the town of Bremen, in the north-west of Germany. This statue is a tower of four animals, who are the Bremen Town Musicians. These four animals are the main characters in an old German Folk Tale (Bremer Stadtmusikanten – The Town Musicians Of Bremen), which was popularized by the Brothers Grimm. When you’re looking for things to do in Bremen, visiting the Bremen Musicians is a must. Not only is it an interesting statue, but the story goes that you can gain good luck from it too.

The Brothers Grimm tale of the Bremen Musicians starts with a donkey. This donkey is growing old, and so will soon not be fit for work. The donkey, realising this runs away to avoid being sent to the slaughterhouse. He runs away to Bremen to become a town musician. On the way, he meets an old dog, whose master had tried to kill him as he could no longer hunt. The donkey convinces the dog to come to Bremen with him.

This raggle-taggle band make up the four Bremen Musicians.

However, the Bremen Musicians could not make it all the way to Bremen in one day. Because of this, they had to stop for shelter as night drew in. They found a house in the forest, and when they looked in they saw a table laden with food and drink with the robbers sat around enjoying themselves. The foursome decided to drive the robbers away so that they could have shelter and food, but to do this they had to come up with a plan…

First, the donkey put his forefeet upon the window ledge and the dog climbed on the donkey’s back. Then the cat climbed on to the dog and the cockerel flew up to the head of the cat, making a pyramid of animals. 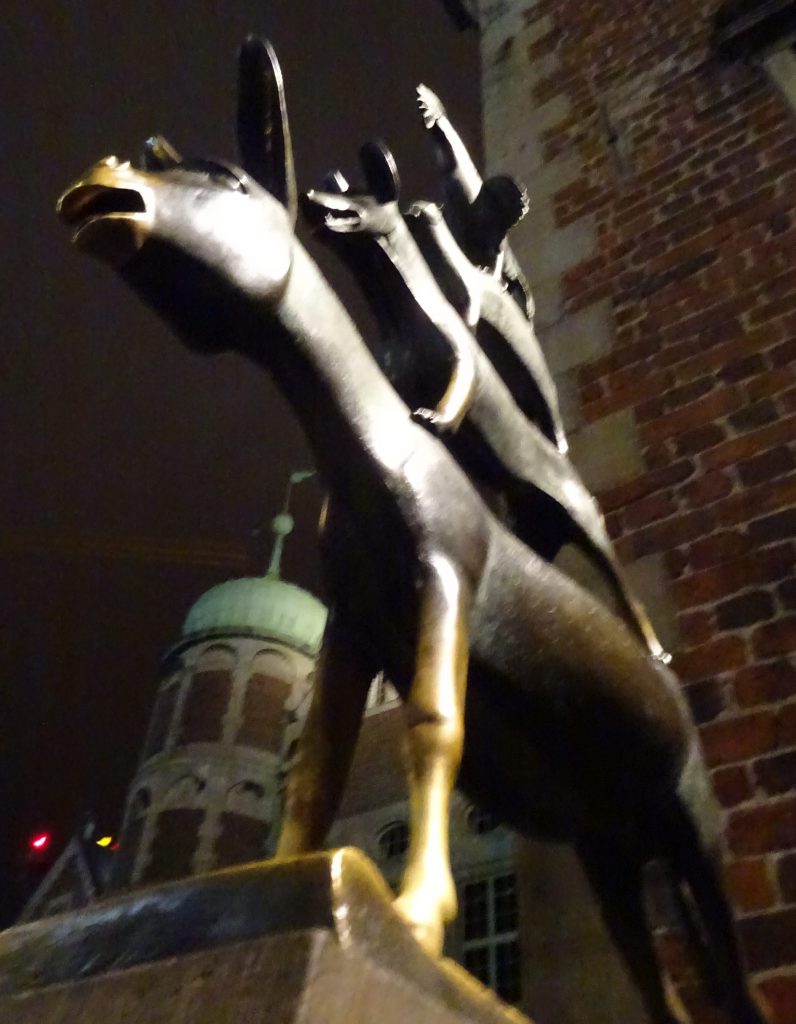 The Pyramid Of Animals Is Seen In The Statue

The Bremen Musicians then began their first performance: “The donkey brayed, the dog barked, the cat mewed and the cockerel crowed”. Whilst “performing”, they burst through the window, surprising the robbers. Thinking that the din could only be a ghost, the robbers fled. The animals then sat down at the table and helped themselves, before settling down for the night.

Later, the robbers noticed that the light in their house had gone out and all seemed quiet. So the leader ordered one of his men to go and examine the house.

The robber entered the house and finding everything quiet, went to the kitchen to light a candle. However, he mistook the fiery eyes of the cat to be live coals, which the cat did not appreciate. The cat flew at the robber’s face, scratching and hissing. The terrified robber ran to the backdoor, but the dog was lying there and jumped up to bite the robber’s leg. As the robber then ran across the yard he went past a straw-heap, where the donkey was, who gave the robber a kick. The cockerel had been awoken by all the noise and crowed.

The robber went back to his companions and told them of a witch in the house. This frightened them all off for good, so the Bremen Musicians stayed in there for the rest of their lives.

The Statue Of The Bremen Musicians

The statue of the Bremen Musicians was created by the artist Gerhard Marcks in 1953, though it was initially on loan from Marcks’ workshop. The head of the tourism organisation in Bremen, Dr Hanns Meyers, relied on the town’s community spirit and started a collection to make the statue of the Bremen Musicians a permanent feature. With the added aid of a loan from the city, the statue was purchased for 20,000 Deutschmarks. And there the statue remains today and is a popular tourist attraction.

Visiting The Statue Of The Bremen Musicians

Going to see this statue in Bremen is a must. The link to historic faerie tales makes it a feature to see. This historic landmark shouldn’t be missed. Even though it appears from the story that the Bremen Musicians never made it to Bremen and only ever “performed” once to scare the robbers, hints to this story can be found all over this city.

This is by far the most popular image of the musicians of Bremen in the city. The four animals are portrayed in the animal pyramid of their first (and only) performance when they scared away the robbers. This statue is the most famous and most photographed representation of the Bremen Musicians.

When you go to see the statue, you will notice that the forelegs of the donkey are much shiny. This is because there is a belief that you can gain good luck by rubbing the forelegs, which many people do. However, be sure to rub each leg at the same time, or you will give yourself away as a tourist! 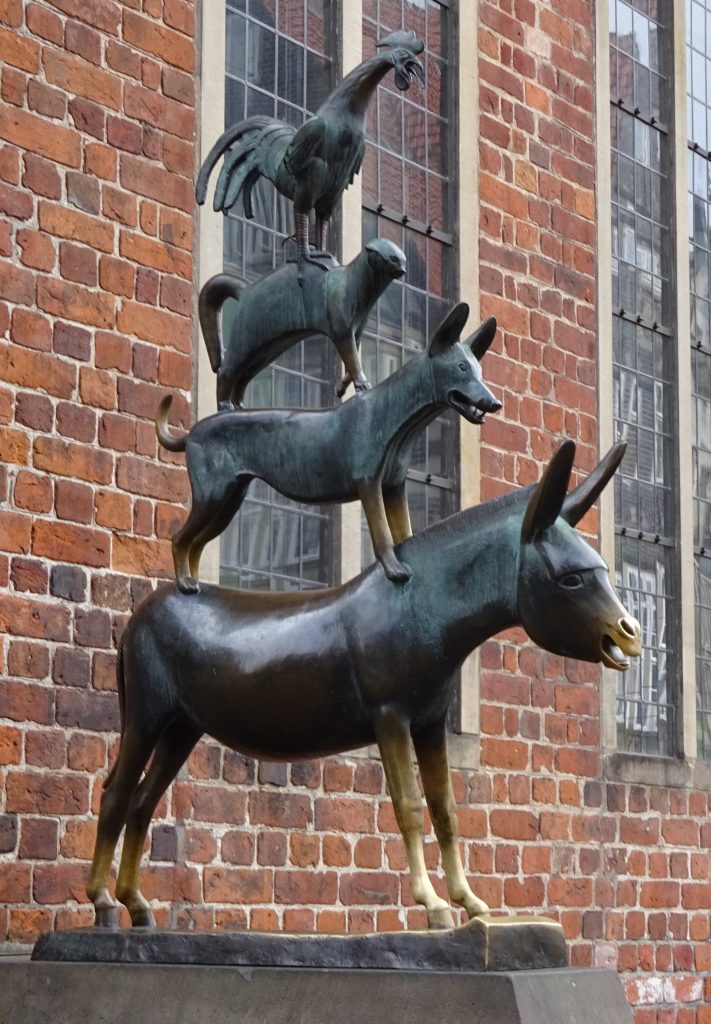 You Can See Where People Have Rubbed The Donkey For Luck

How To Get To The Bremen Musicians Statue

Located just west of the Town Hall in Bremen, the bronze statue of the Town Musicians is easy to find. It is on the left (or western side) of the Town Hall. From the main train station, you want to head down Bahnhofstraße and follow this road until you reach Herdentorsteinweg. Turn right down this road and once you have gone through a park you will reach a junction. At this junction, you want to go down Sögestraße until you find Unser Lieben Frauen Kirchhof on your left, turn down this street. You will go past a church and between this church and the town hall you need to turn right onto Schoppensteel, the statue is located here.

There are also plenty of tours of Bremen, like this one, that will take you to the Town Musicians statue

If you’re looking for reasons to visit Bremen, the statue of the Town Musicians is definitely one. It is so important to this city, is linked to a historic Bremen fairy tale and you can even gain some luck. Do you need any more reasons to visit?

Want to go to see the Bremen Town Musicians? Check out nearby accommodation on HostelWorld. 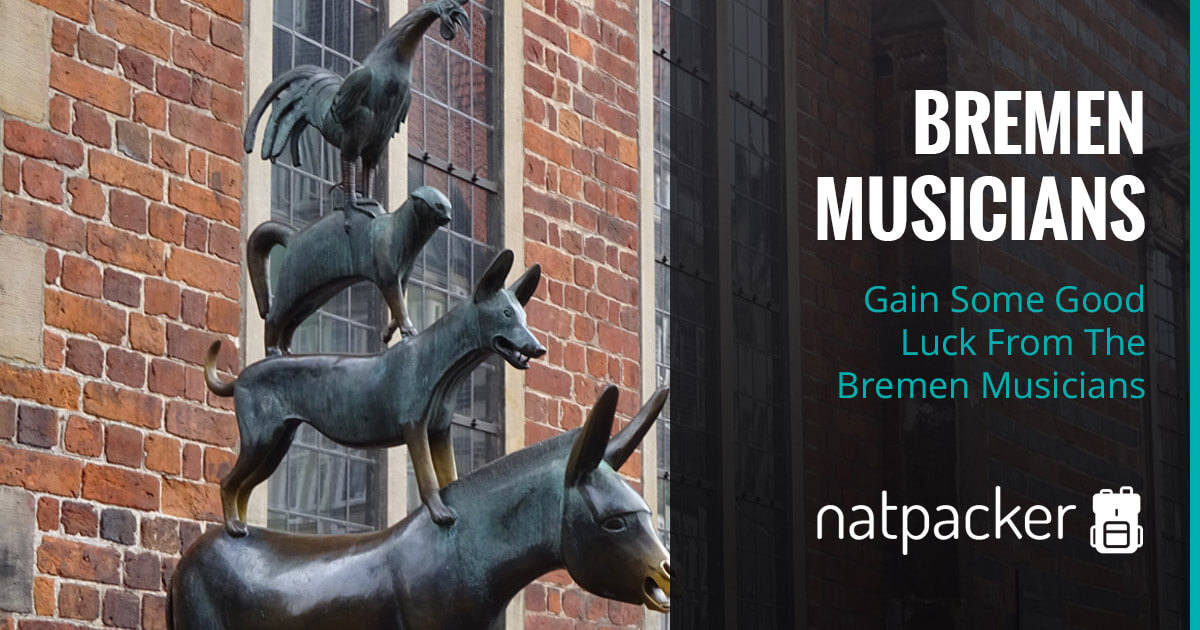