The Chester Walls were once a defensive structure in the city of Chester in Cheshire. Now they are a Scheduled Ancient Monument and a tourist attraction. You can take a walk along the walls and discover interesting information along the route.

The walls circuit what was once the medieval city of Chester. It takes about one hour to complete the 2 mile (3 km) walk, longer if you want to hop off and see other attractions along the way (which I encourage you to do). Being a public footpath the walls walk is always open and is completely free! However, there is normally some maintenance work going on, so don’t be surprised if you have to make a small detour or two!

The Chester Walls were originally built by the Romans in 70-80 A.D. These original walls were made of wood. In 100 A.D. these defences were rebuilt in sandstone. These stone walls survived long after the Romans.

By 907 A.D. the Saxons controlled Chester. Between 1120 – 1350 the Normans repaired, restored and extended much of the walls.

The wall didn’t see much action after the Civil War. By the 18th century the walls had been converted into a fashionable walkway. As the walls no longer had a defensive purpose, the gates were replaced by arches and many of the towers altered or even destroyed. 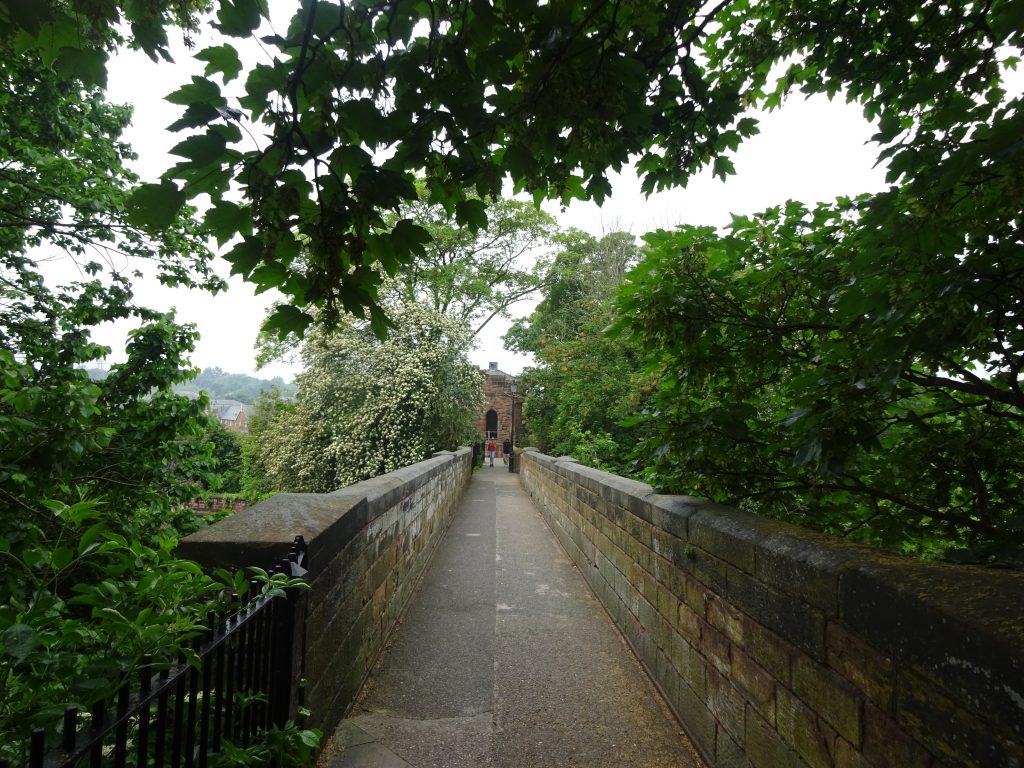 The Chester Walls walk can be done in one go, or in smaller segments. There are plenty of places to stop off on the walk round to visit more attractions, if you have time, such as the Amphitheatre, Roman Gardens, Cathedral, Rows, Dee Estuary and Chester Race Course. There’s lots of information along the way too. I’m going to start at the Eastgate and take you in an anticlockwise direction, as this is what I normally do. However, there is no right or wrong way to do this walk, do whatever feels right! I will tell you sites of interest both on and in walking distance of the wall. 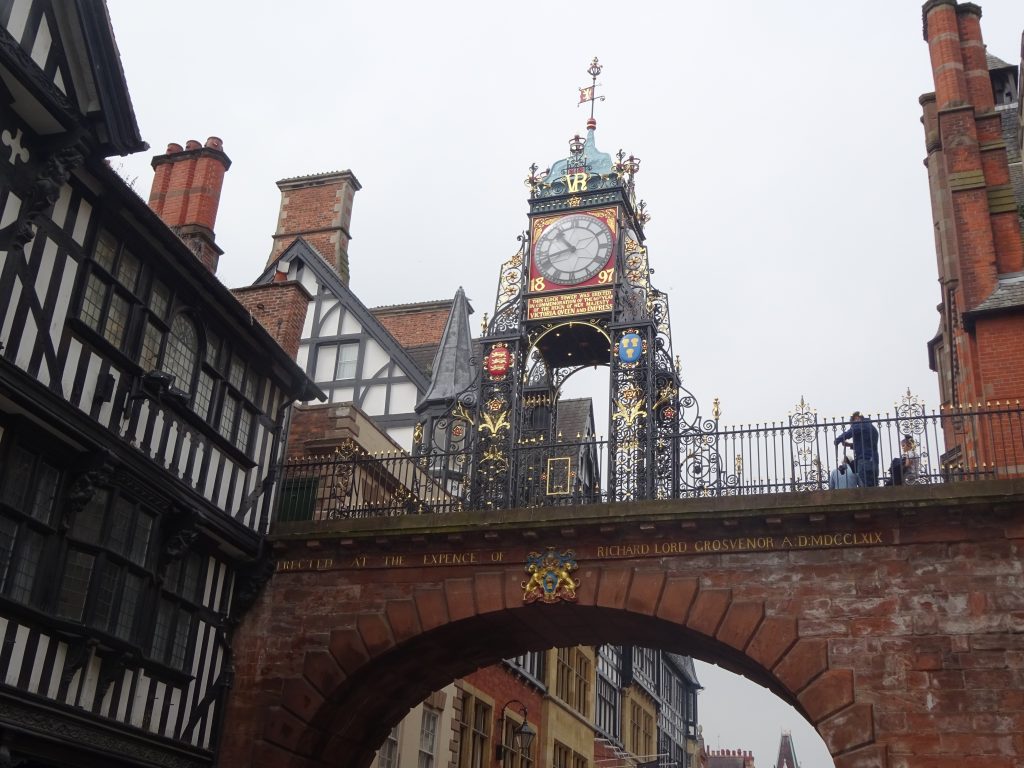 Coming up to the Eastgate (as if you are coming from the train station and heading towards the Rows) you will notice the beautiful iron-wrought clock tower on top. This clock tower was built in 1899 and designed by a local architect, John Douglas, to celebrate the Diamond Jubilee of Queen Victoria. The gate itself was built in 1768, replacing the earlier Roman gates.

From the direction stated above, turn to the right as you reach the gate and you will see stairs leading up onto the walls (past a small doughnut stand called ‘Dinky Doughnuts’).Take these steps and you will be on the wall, facing the direction I am going to take you. 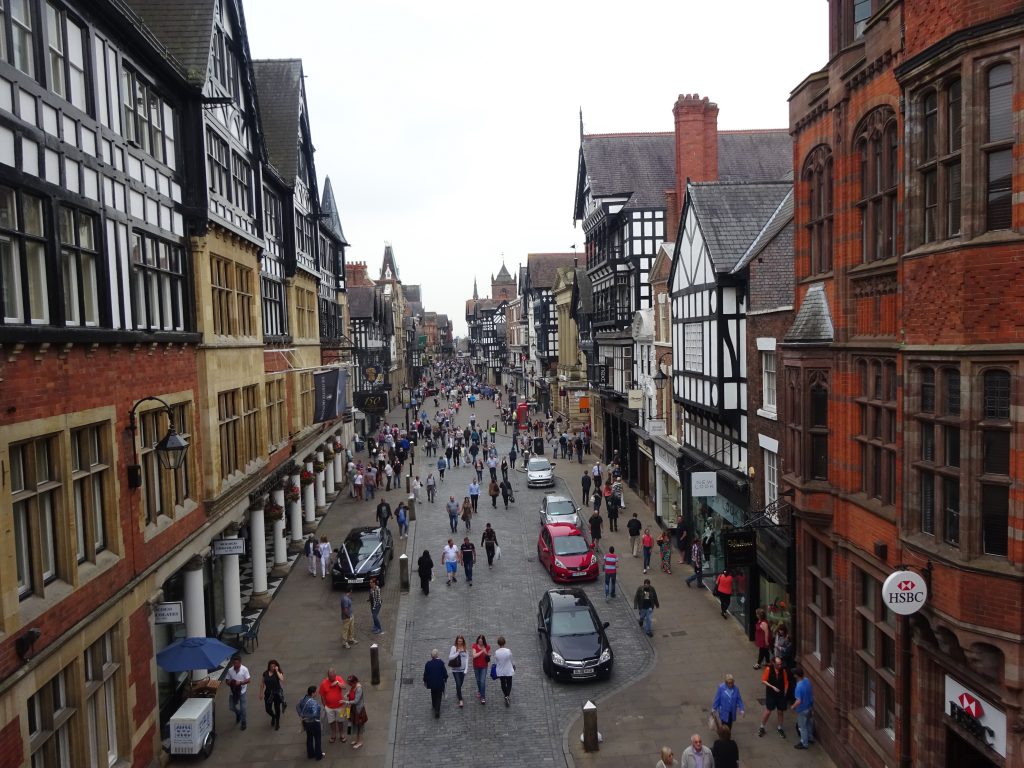 As you walk along the walls, you soon reach the Cathedral on your left. There has been a church on this site since the 7th century. In 1092 this became an Abbey for Benedictine Monks. With the dissolution of the monasteries, Henry VIII seized this Abbey in 1540 and a year later the Abbey church became Chester Cathedral. 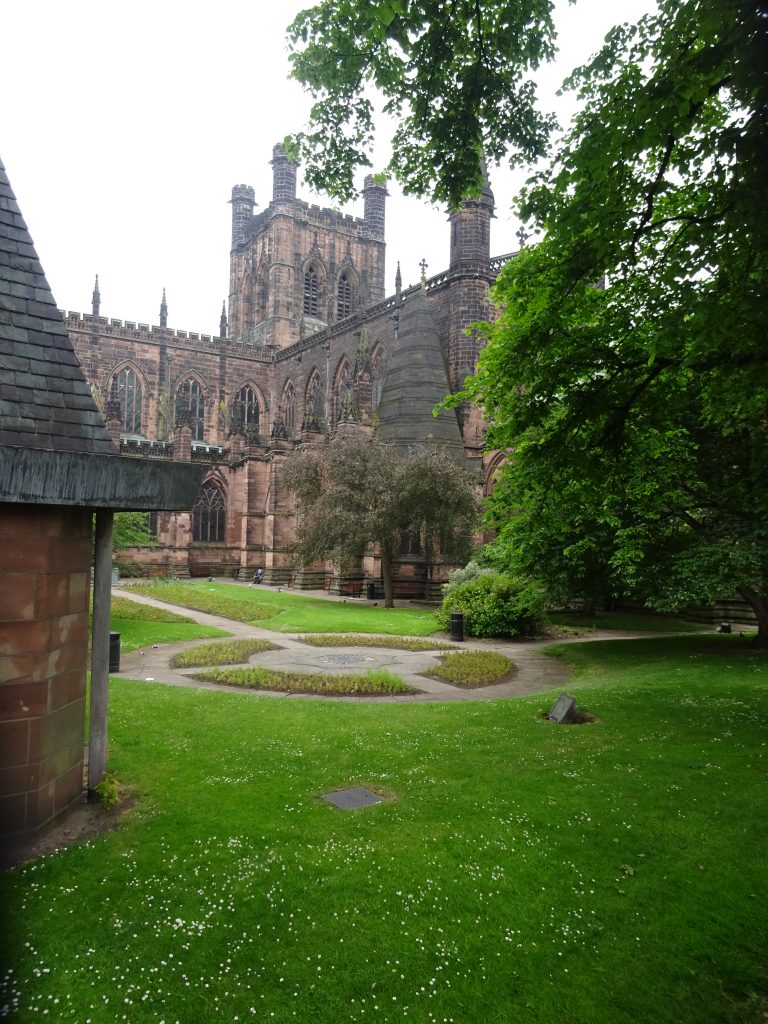 Chester Cathedral From The Walls

You can step off the wall to see the Kaleyard Gate not long after you pass the Cathedral. This is a secondary gate that was built so that the Monks had direct access to their vegetable garden.

Next along the Chester Walls you will reach King Charles Tower, also known as the Phoenix Tower, on the Northeast corner of the walls. It was once an important watchtower. The name ‘King Charles Tower’ comes from the story that King Charles I watched his army be defeated by Parliamentarians from the roof of this tower. This was the Battle of Rowton Moor during the English Civil War.

The name ‘Phoenix Tower’ is for a different reason. The towers fell into disrepair and were leased out to guilds to hold meetings in. in the 16th century the painters guild did a lot of work to restore the tower so that they could hold meetings here. There is a carving of a phoenix above the door, which is the emblem of the painters guild. 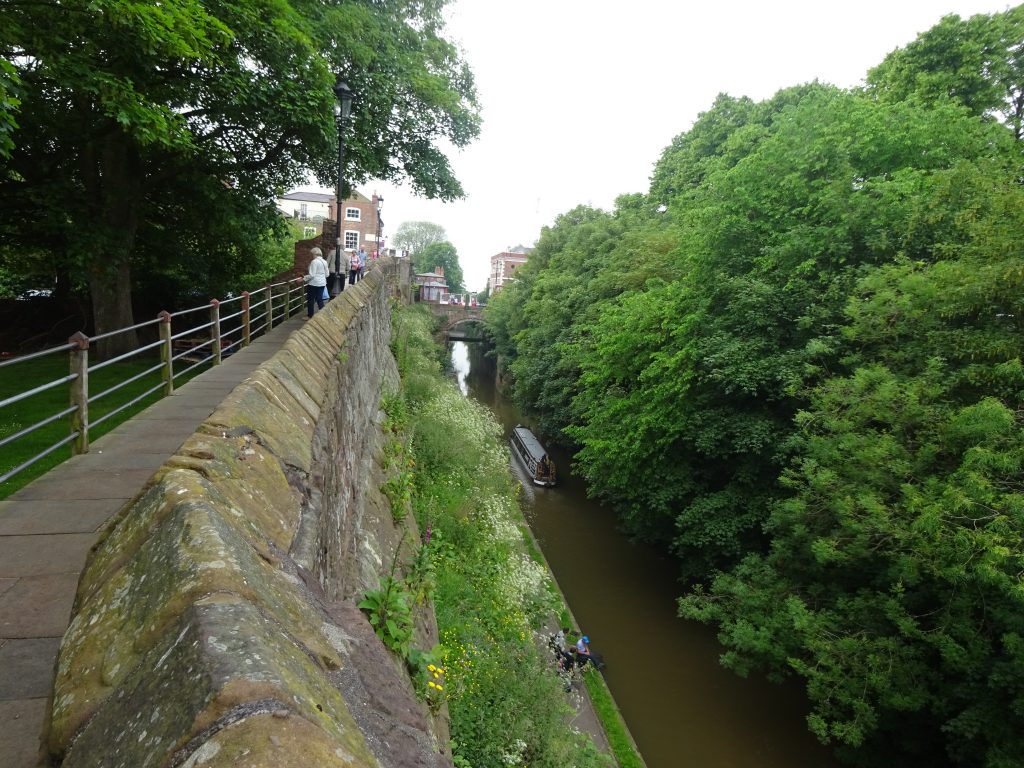 The Northgate is the highest point on the Chester Walls, offering a good view of the city. This is the original Northern access to the Roman City. In medieval times this gate was rarely used and later became a goal. The present structure replaced the medieval gatehouse in 1810. 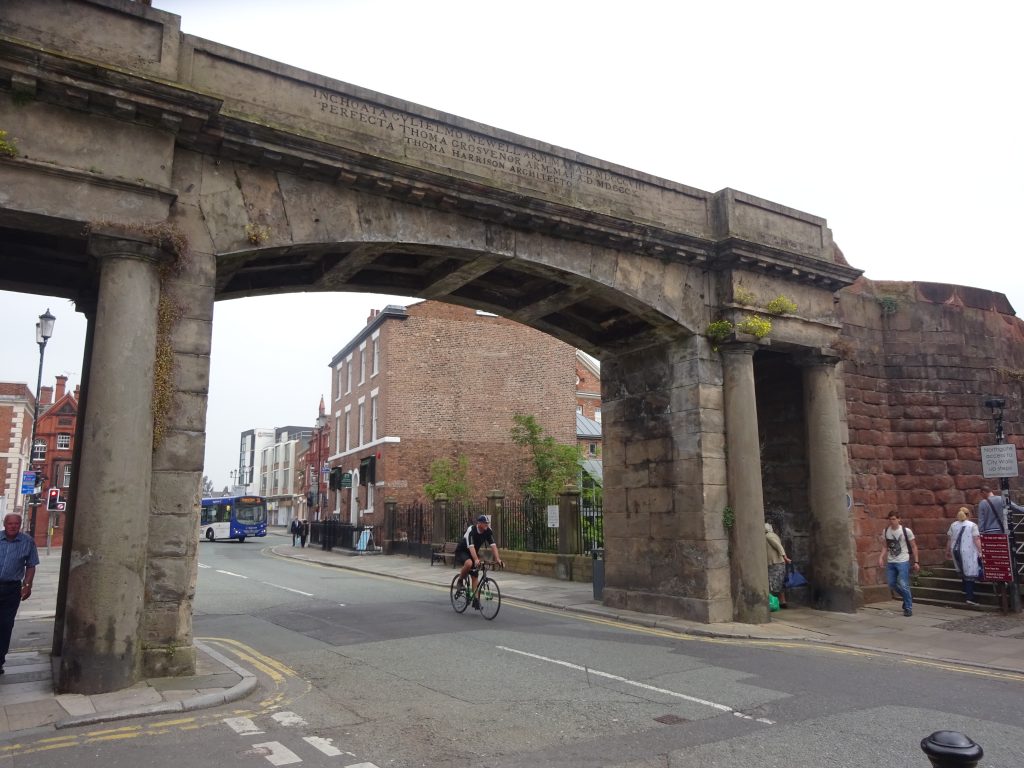 Climb up Morgan’s Mount for another splendid view. The mount was built in 1645 for an observation platform. You can also come off the wall here and see a canon sculpture. ‘Morgan’ was Captain Edward Morgan who was a Royalist during the Civil War, unfortunately not much is known about him. 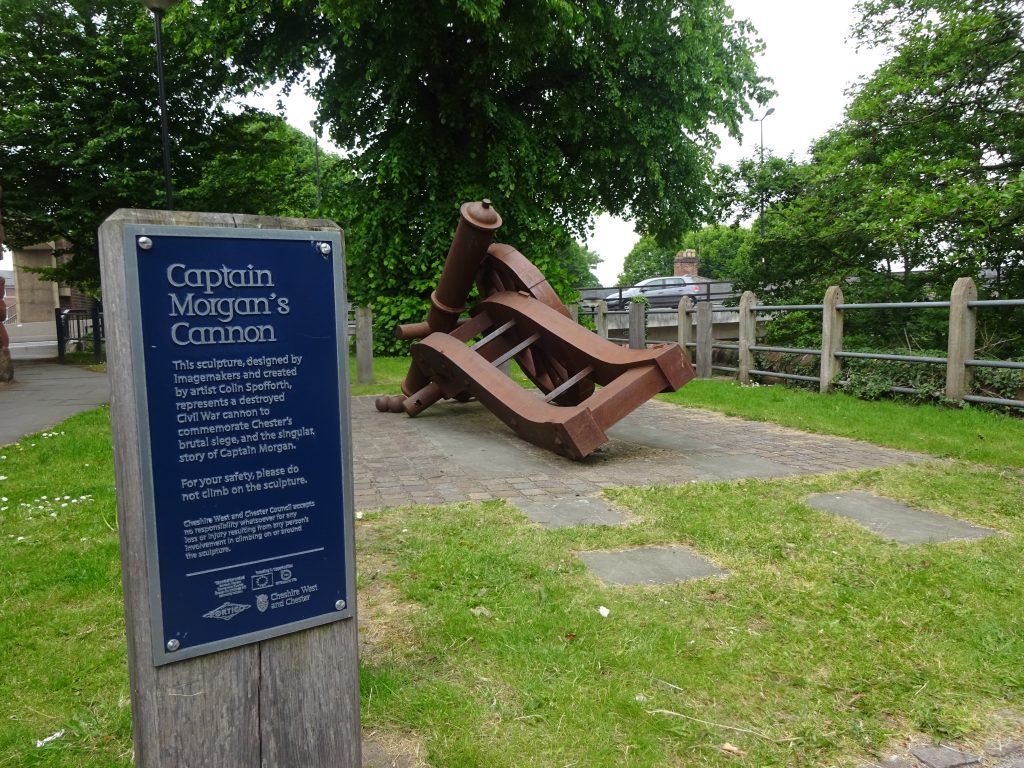 Originally known as ‘Goblin Tower’, this structure was originally circular, but is now semi-circular. The reconstruction took place in 1894. The name Pembourtor comes from the Mayor of the time, who often stood on the tower to supervise the work of his ropewalk nearby.

This Tower is on the Northwest corner of the Walls. This Tower has been here since 1249 and is the gatehouse to the Water Tower. 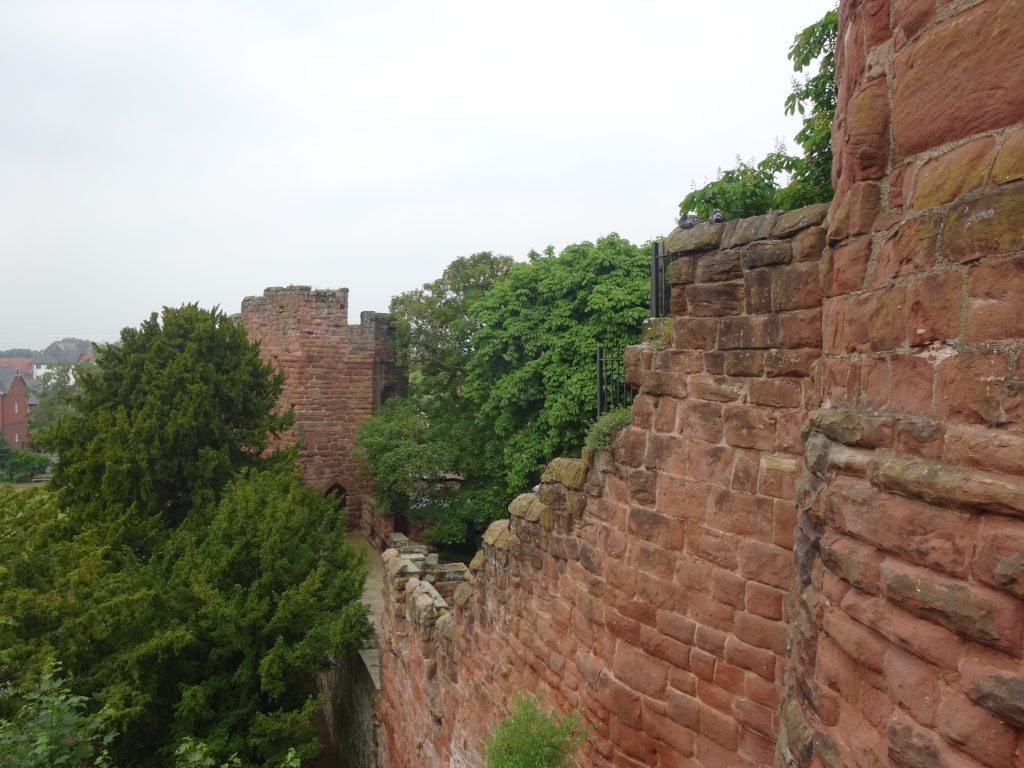 The Watergate was built between 1788 and 1790. This gate was once an important port, being the main landing point for goods arriving from the sea.

Walking past the Water Gate you soon are overlooking the Roodee on your right. This is now Chester Race Course. This area was once completely covered by the River Dee and used as a harbour. The Roodee is the oldest race course to still be used in England.

Chester Roodees (Racecourse) From The Wall

The next point of interest you will spot of the Walls is Chester Castle on your left. William the Conqueror first built here in 1070, although this castle was made of wood and so was later updated to stone. 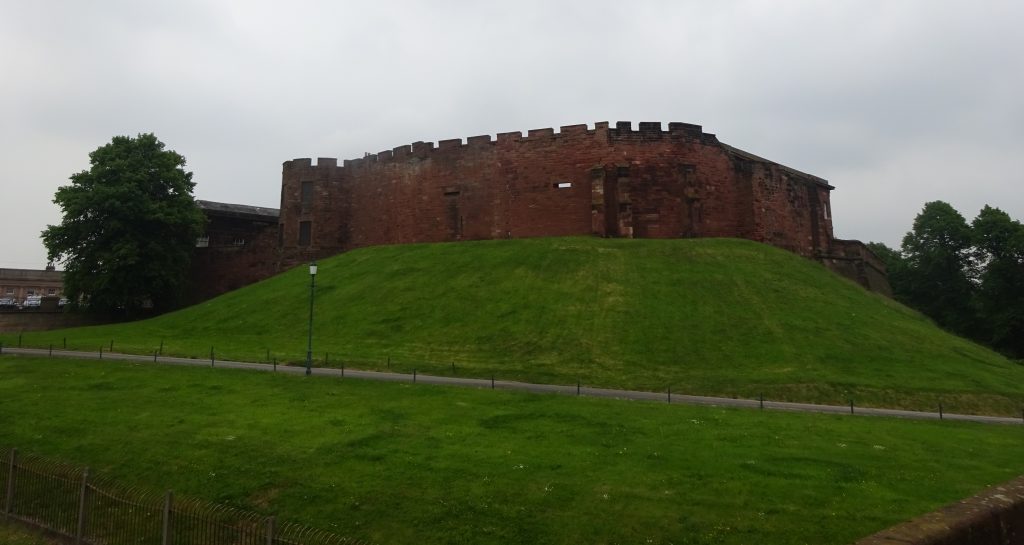 The Bridgegate once guarded the entrance to Chester via the Old Dee Bridge, which can be seen from here. The Old Dee Bridge was once an important river crossing into Wales. 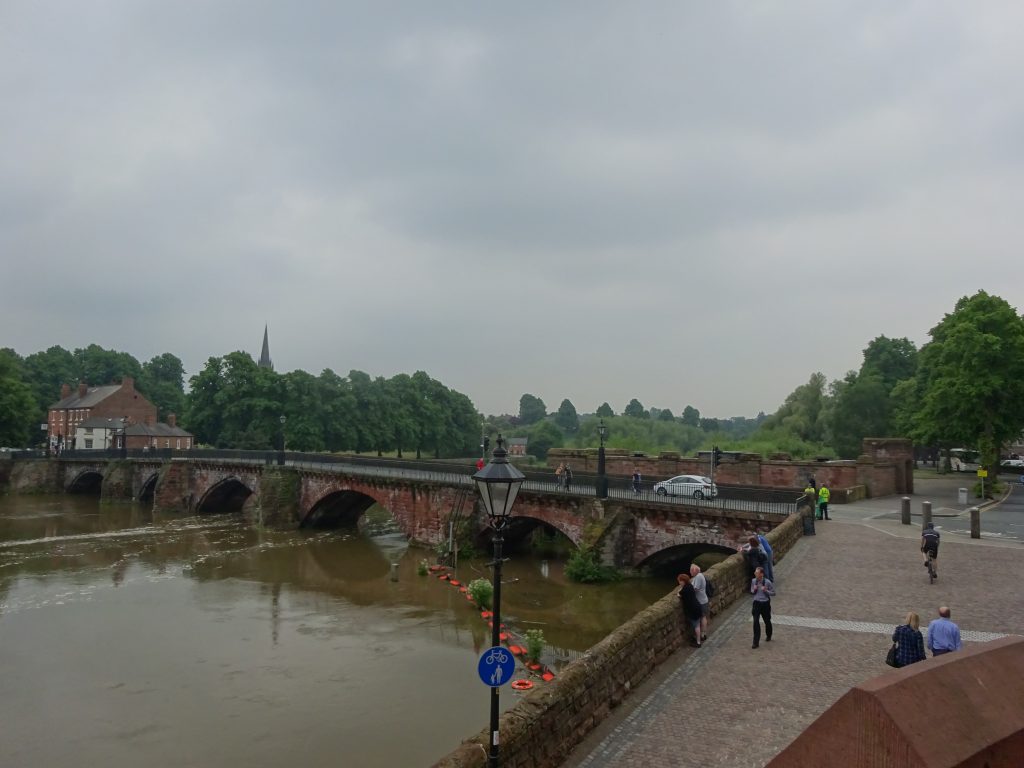 Continuing along the walls you soon reach the Groves below you on your right. This is Chester’s riverside promenade. You can hop of the wall here, it is especially busy in summer with river cruises, boat hire and icecreams!

Another off the Walls feature you can pop down to, the Roman Garden. This Garden was established in 1949, as Chester’s part in the Festival Of Britain, 1951.

The Roman Amphitheatre can be seen from the walls, and is easy to get to for a closer look. This Amphitheatre was probably built around 70 A.D. It was constructed of stone, and not wood, at the first building. It is only partly excavated and an artist impression shows the rest, but these remains are of the largest stone built military Amphitheatre in Britain. 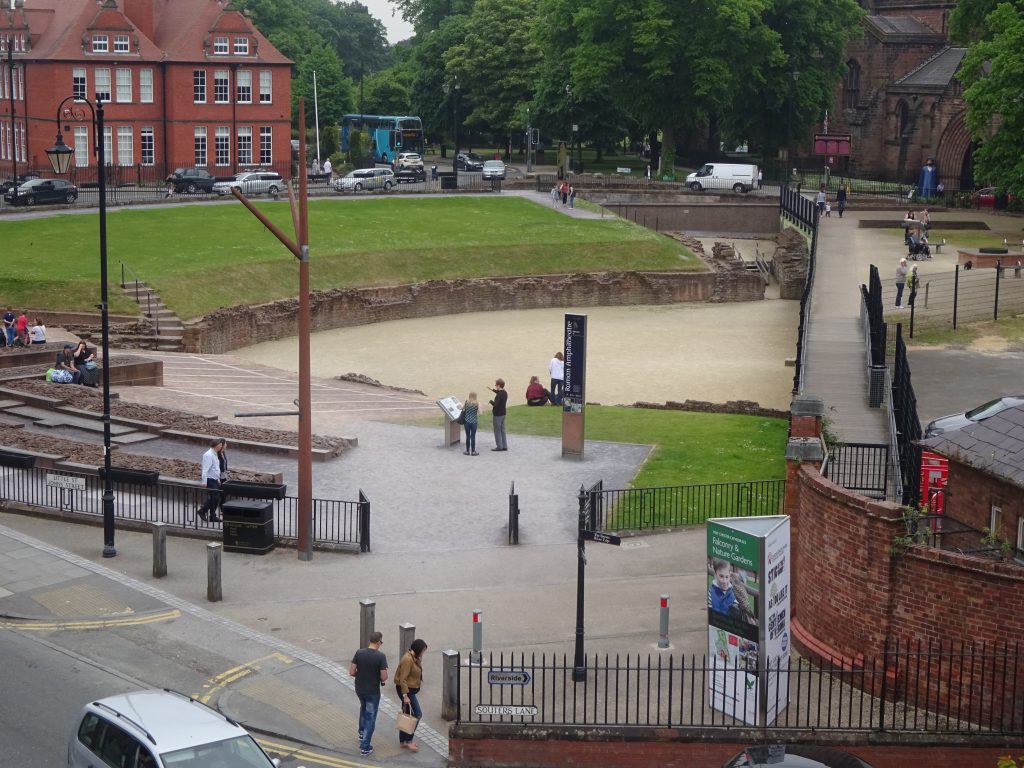 Newgate is one of the most recent gateways in the city centre, built in 1938. It was rebuilt to widen the road for traffic. The original gate here was called Wolfelds Gate, which was first recorded in the 12th century. It later became known as Peppergate, which has an interesting story connected to it:

In 1573 a young woman defied her father by eloping with a man that he disapproved off. They eloped through Peppergate during one night. The father, in his anger, persuaded the city to lock the gate at night leading to a local proverb of “When the daughter is stolen, shut the Peppergate” which is equivalent to “Shutting the stable door after the horse has bolted”. 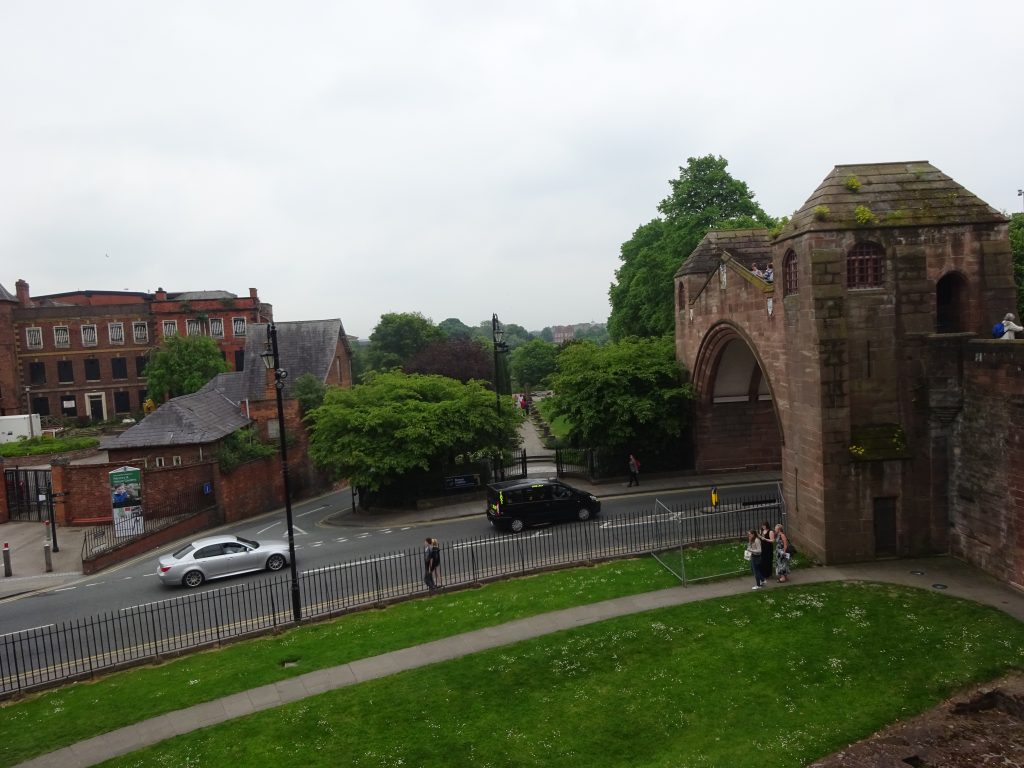 Thimbleby’s Tower was once known as ‘Wolf’s Tower’. It was built in the 13th century. Nowadays you can often find an artist here, selling his wares and painting.

And then you are back to the Eastgate!

Whether you are after a nice, easy stroll or seeing most of what Chester has to offer in a short time, Chester Walls can cater for you! There’s plenty of history and some spectacular views! It’s definitely a ‘Must Do’ in Chester!

Want to visit? Why not check out accommodation on TripAdvisor? 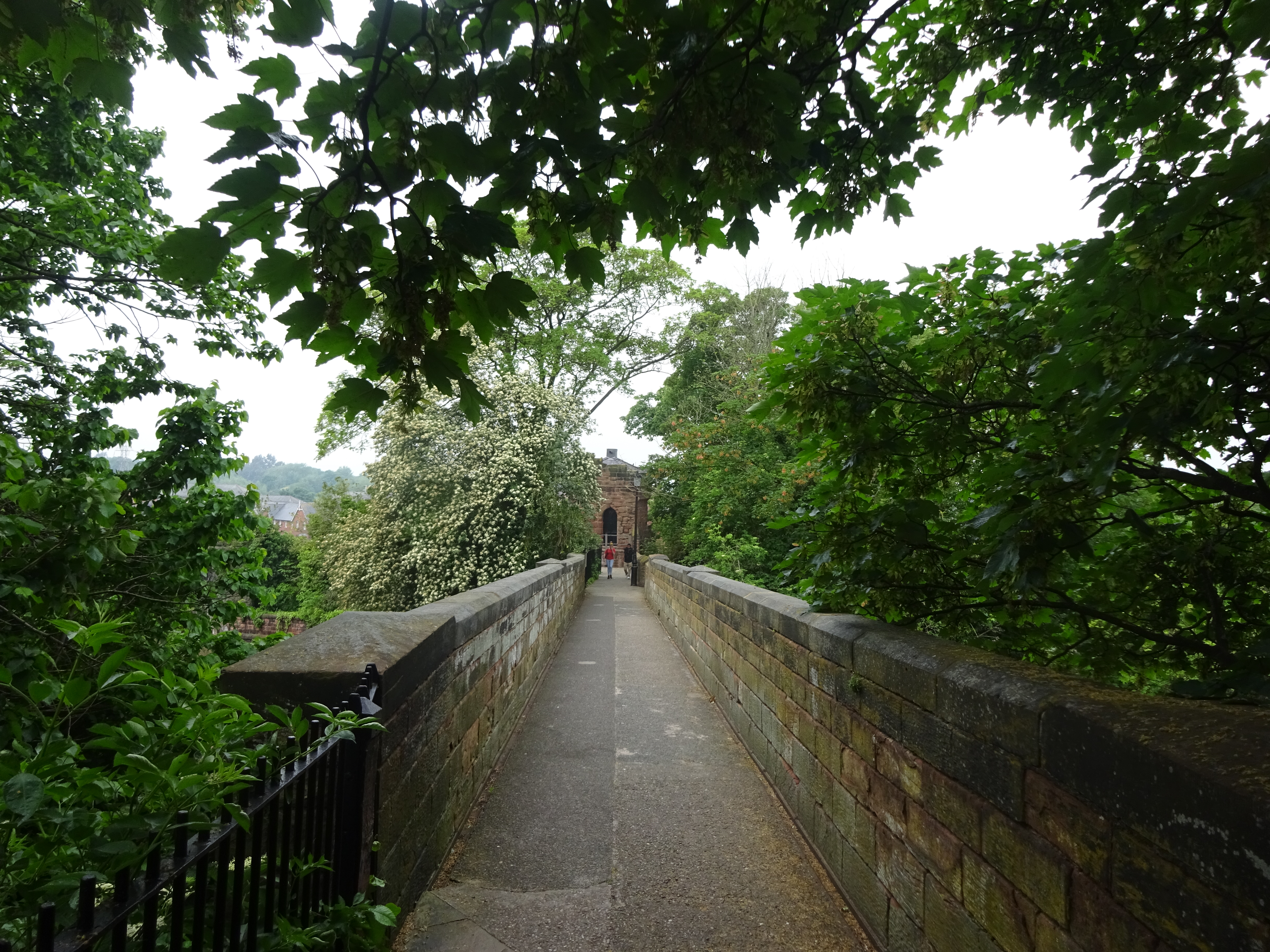