Neuschwanstein Castle is a picturesque palace perched on the hilltop above the village of Hohenschwangau. Bavarian Castles are known for their faerie tale looks, but Neuschwanstein really is right out of a story.

The blue and white palace is iconic and is also known as the Disney Castle, Walt Disney visited Schloss Neuschwanstein in 1955 and it is said to be his inspiration for the Sleeping Beauty Castle. So if you want to visit the original Disney Castle, a trip to Germany should be on the top of your list.

The History Of Neuschwanstein Castle

The palace of Neuschwanstein was commissioned by Ludwig II of Bavaria, and the building began in 1856, with the foundation stone being laid on 5th September. Schloss Neuschwanstein was essentially the Mad King’s (as he is also known) dream and he funded it from his personal funds with excessive borrowing. The castle ended up costing double the initial estimates and this was just in King Ludwig’s lifetime! 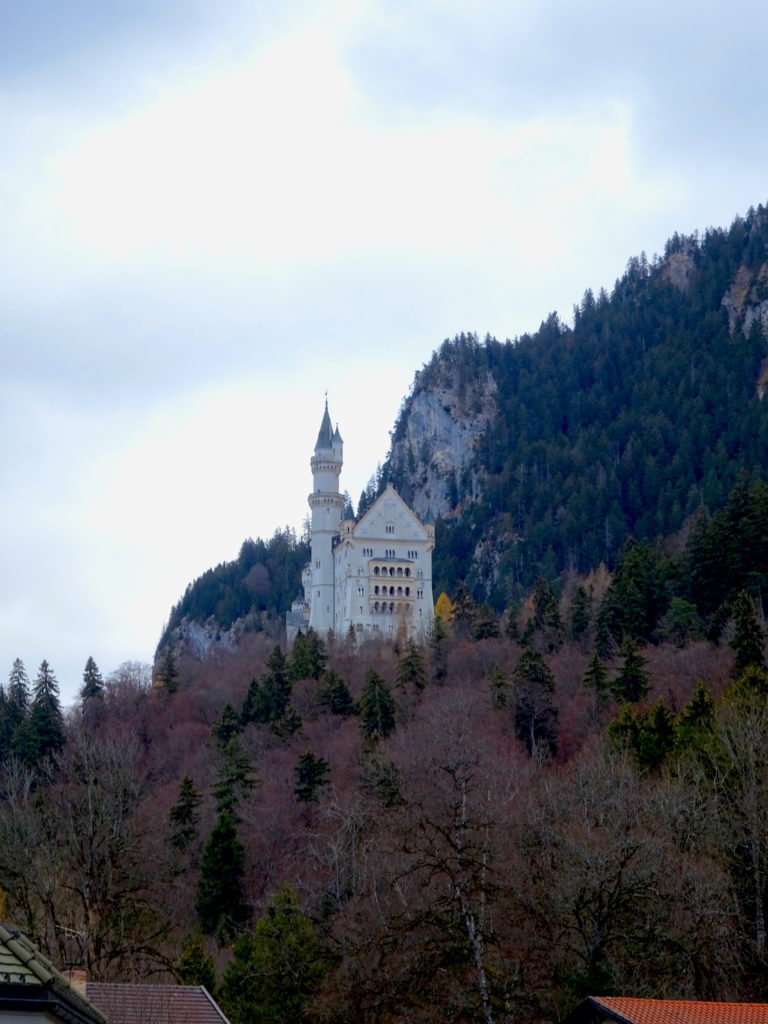 King Ludwig designed a castle drawing inspiration from Romanticism and the operas of Richard Wagner. The plans were made by Edward Riedel and sketches made by Christian Jank. Builders changed throughout the construction.

The castle was intended as a private home and so there is no Royal Court. Neuschwanstein Castle is purely decorative as it was intended as a retreat. There were several sections of the palace planned, which was how Ludwig requested it was built; the gateway building, ladies apartments, knights building, a keep with a chapel and the royal building (or palace). However, much of the castle is unfinished. For instance, inside it is only the kitchen and adjoining rooms, singers hall, throne room and royal apartments that are complete. 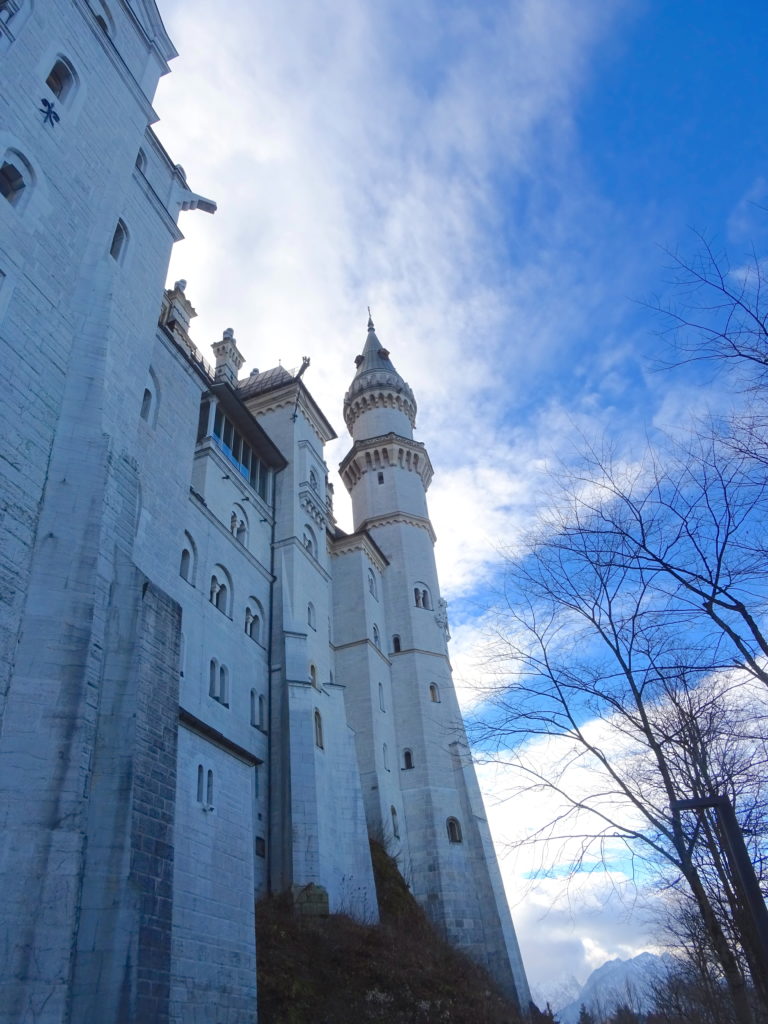 One Of The Decorative Spires

In 1884, King Ludwig moved into the castle, even though it was unfinished, he only slept in the castle for a total of eleven nights. In 1886 Ludwig II died and so the construction of the castle ceased. But like the interior, not much was completed. In fact, only one-third of the castle is complete; the gateway building, knights building and royal building.

Six weeks after the king’s death, Neuschwanstein Castle was opened to paying visitors. This helped to balance the books. 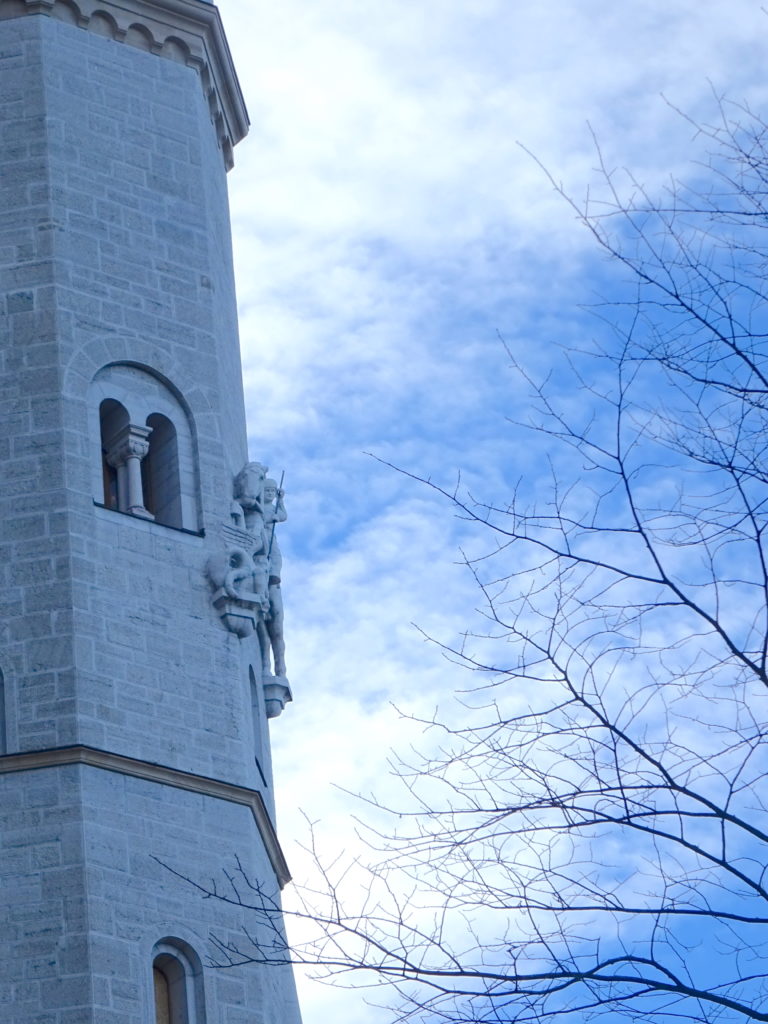 Make Sure You Look At The Spires When You Visit

You can visit the exterior of the castle for free, however, if you want to see the Neuschwanstein Castle interior, you have to purchase tickets (check out reviews of the castle here). Tickets can be just for Neuschwanstein, or combination tickets are available. 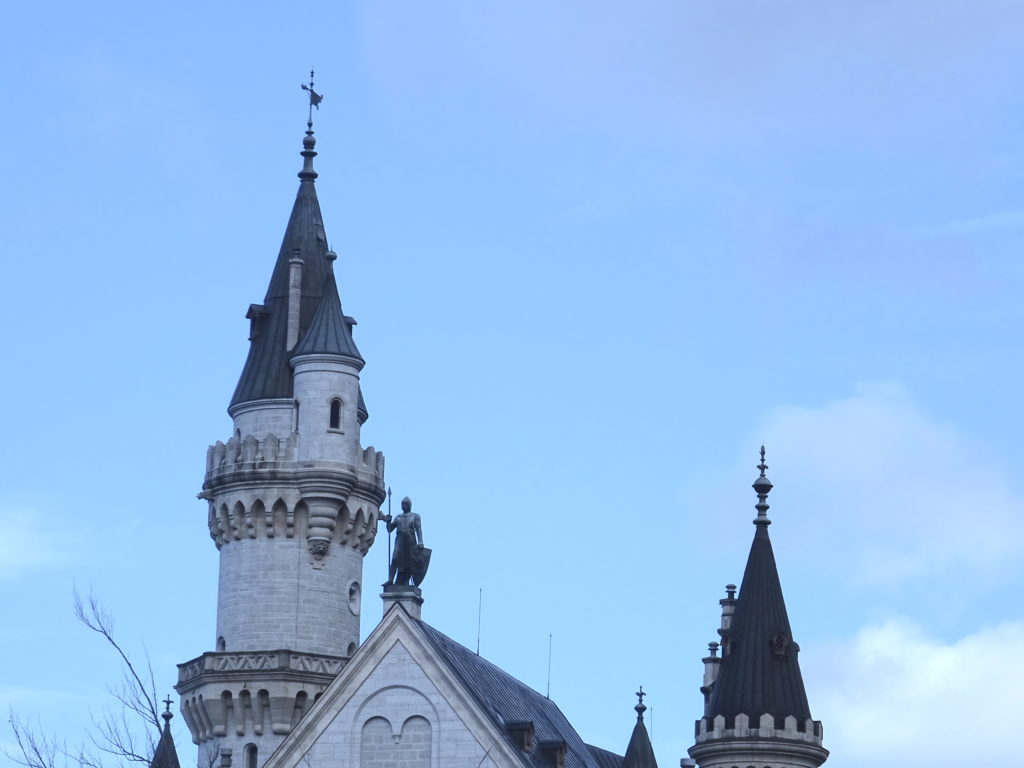 The Spires Of The Castle 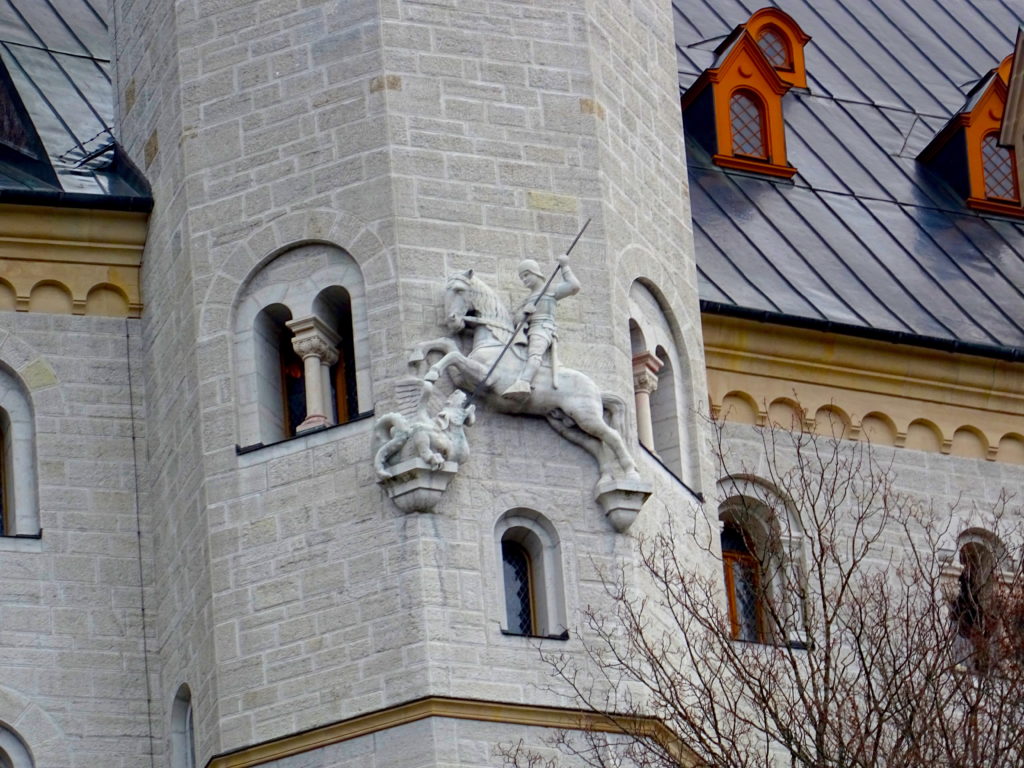 The Exterior Of The Castle Has Many Carvings

You can take tours that include tickets into the castle, or have them as an optional extra. The castle is open throughout the year (except certain holidays), be sure to check opening times here before you go.

When you get to Hohenschwangau village you can walk up the hill to the castle itself, if you just want to see it from the outside. You will also need to take the walk (or there is transport available on most days) if you have tickets to visit inside. 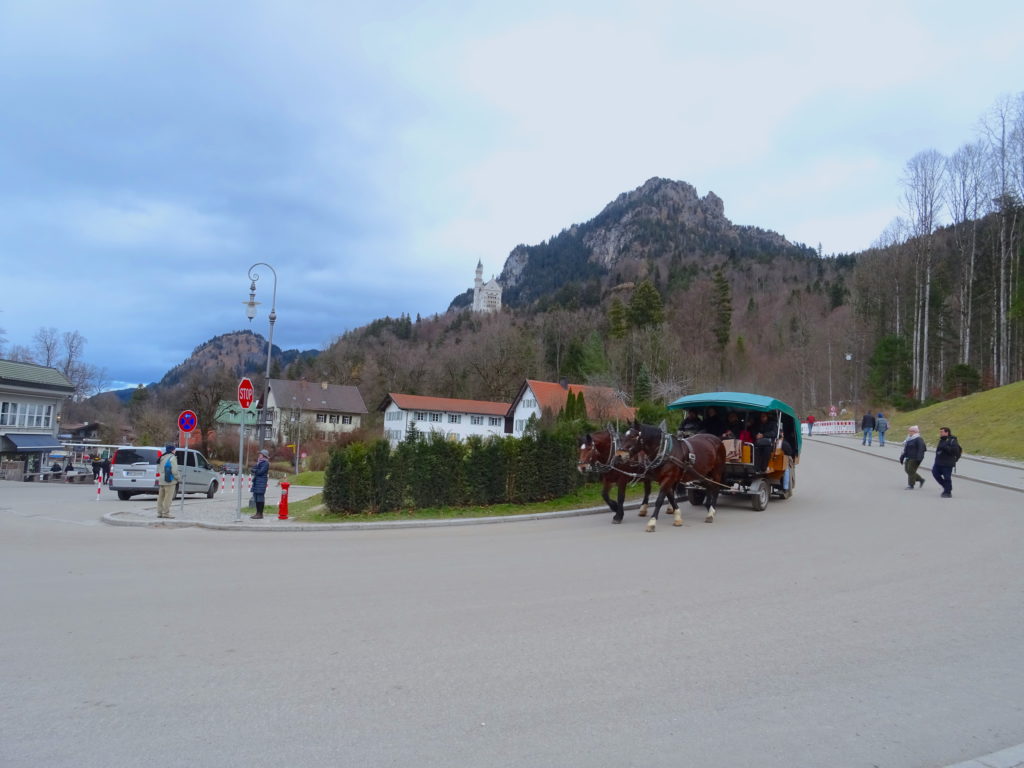 Horse Drawn Carts Are Available To Take You Up The Hill, Weather Dependent 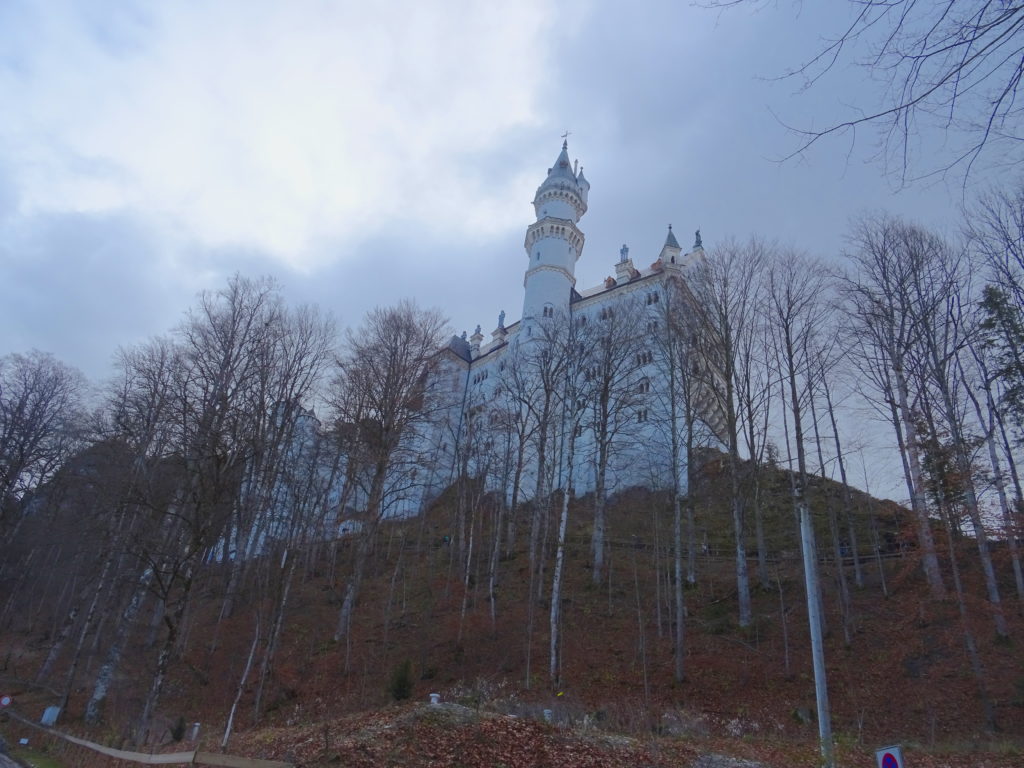 Neuschwanstein Castle From The Path 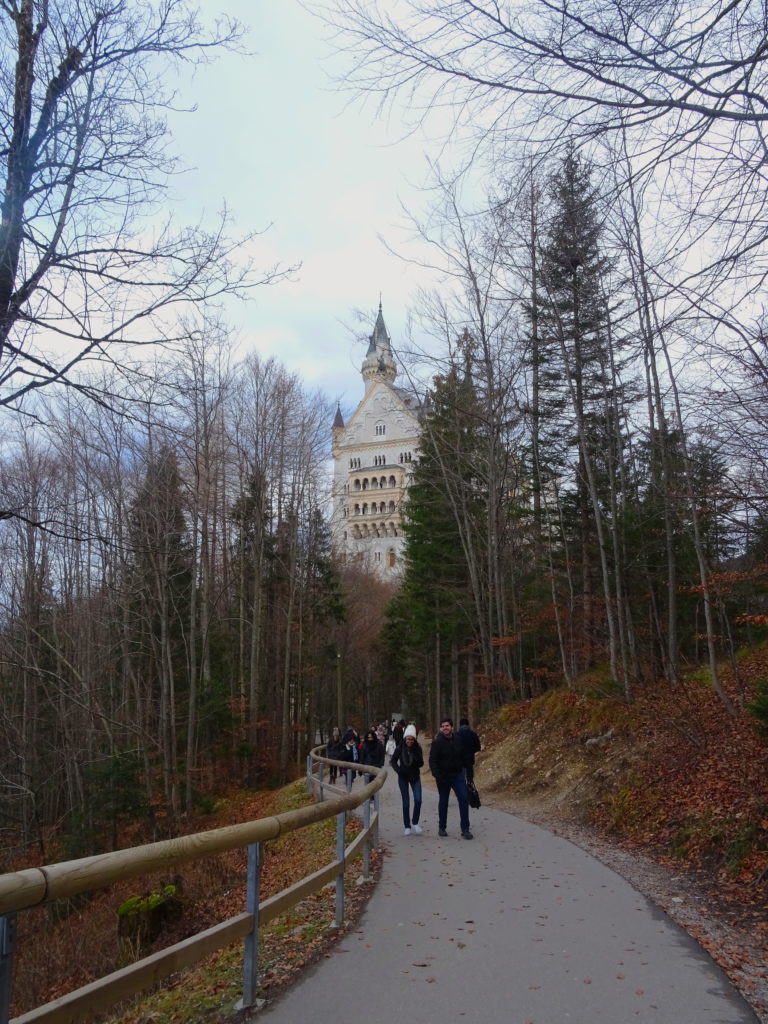 Getting Near To The Castle, It’s Just As Breathtaking Close Up

If you do decide to take the tour of the interior of Neuschwanstein Castle, you will be given a precise time for your tour. Note that no pictures are allowed inside the castle.

On the tour, you will be taken through:

The Throne Room, which ironically doesn’t have a throne, as it was unfinished. This church-style room has an impressive painting behind where the throne would sit, which includes the twelve apostles, six kings and Jesus. The floor is also incredible. The mosaic is a Buddhist design and includes various images of plants and animals.

In the Bedroom, you will see some incredible wooden carvings that represent gothic towers. This room is special as it was supplied with running water from a nearby spring and even had central heating (quite the thing in the 1800s).

The Singers Hall is stunning. It is the largest room in the palace and is decorated with paintings based on legends, the paintings are very romanticised here, for instance, battle scenes show no blood. But the lack of realism suits this castle.

Between the Salon, which is decorated with murals from the Lohengrin Saga, and the Study, which has murals from the Tannhäuser Saga, is a very bizarre room for a castle. Here is the Grotto, which is literally an artificial cave in a castle. Originally this room had coloured lighting and a waterfall.

Once you have toured the finished rooms with your guide you walk through parts of the unfinished palace to the exit. 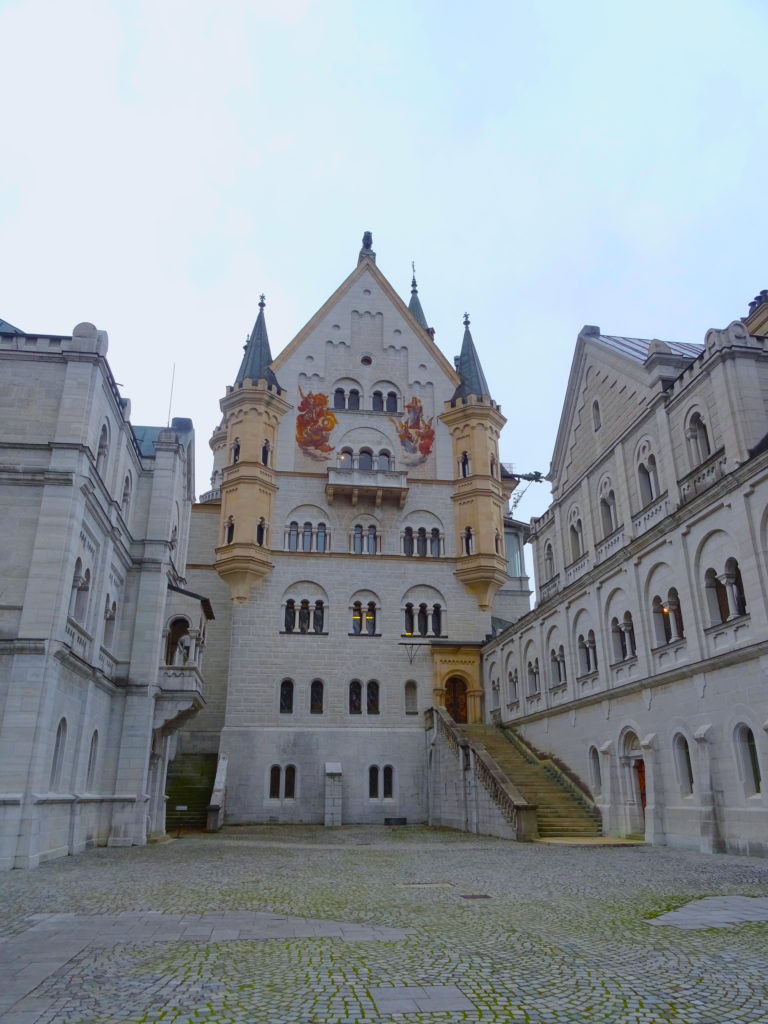 The Courtyard Of Neuschwanstein Castle 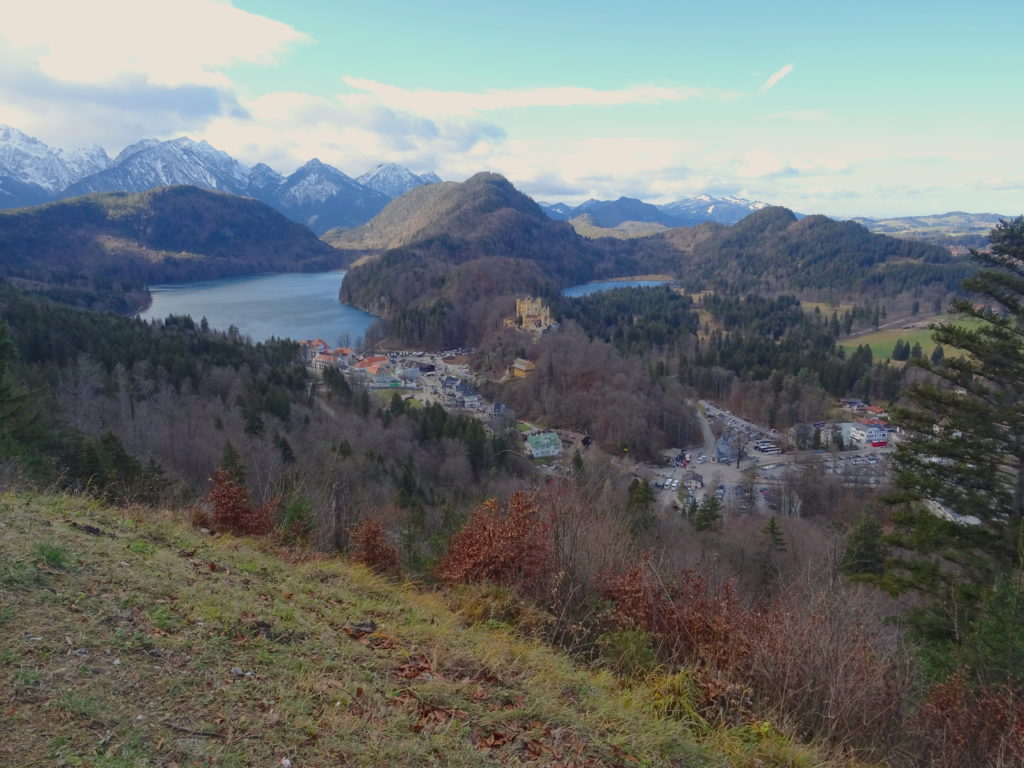 The Views Of The Village From Schloss Neuschwanstein

Before you visit Neuschwanstein Castle, here are some bits you need to know: 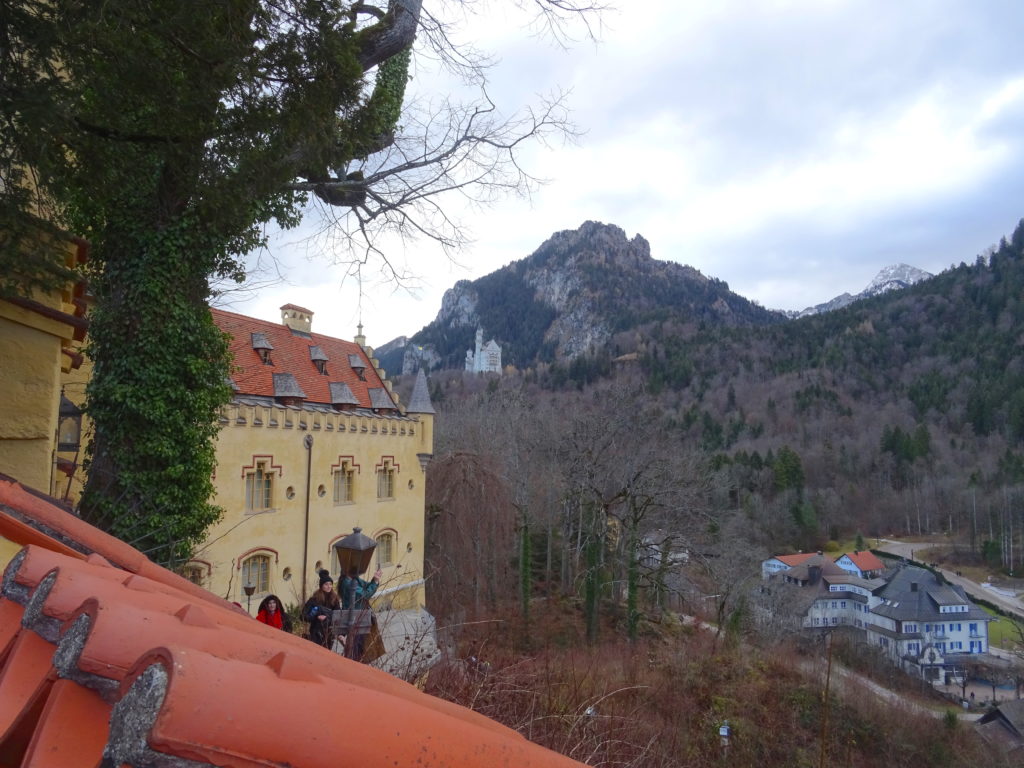 If You Visit Hohenschwangau Castle Too, You Get Great Views Of Neuschwanstein

How To Get To Neuschwanstein Castle

You can easily get to Neuschwanstein from Munich. One of the easiest ways is to join an organised tour, check out what’s available with Get Your Guide. The plus points of a guided tour are that you don’t have to worry about the transport and your guide will make sure you learn and see the main points of interest.

Alternatively, you can get to the castle from Munich on your own. It’s pretty simple too. Catch a train from Munich to Füssen. From Füssen station there is a bus to Hohenschwangau Neuschwanstein Castles (Bus 73 or 78). Another option is Flix Bus, who do a route from Munich to Hohenschwangau. The plus points of seeing Neuschwanstein on your own is that you can see everything at your own pace. Many tours don’t include access to either the castles and don’t have time for the museum, so doing it on your own means you have the opportunity to see everything. 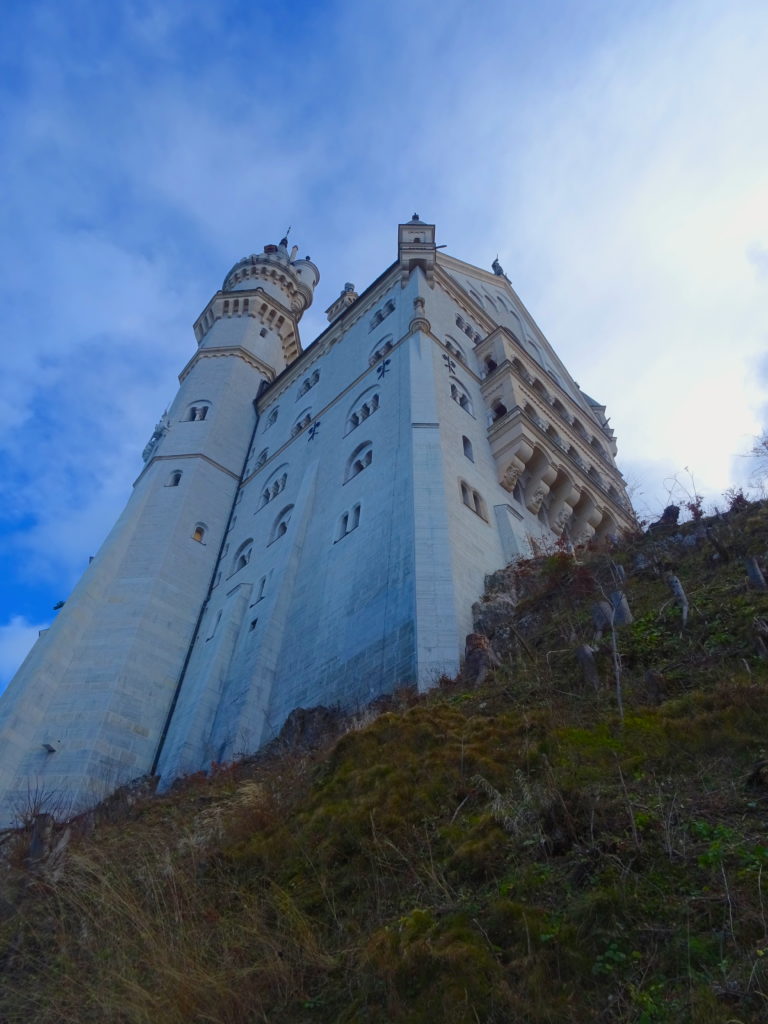 Looking Up To Neuschwanstein Castle

Neuschwanstein Castle is absolutely stunning and well worth a visit, even if you just admire it from the outside. It’s no wonder that Schloss Neuschwanstein was the inspiration for the Disney Castle. The mad kings dream home is literally straight out of a faerie tale.

Want to visit Neuschwanstein Castle? Check out nearby hostels on Hostelworld. 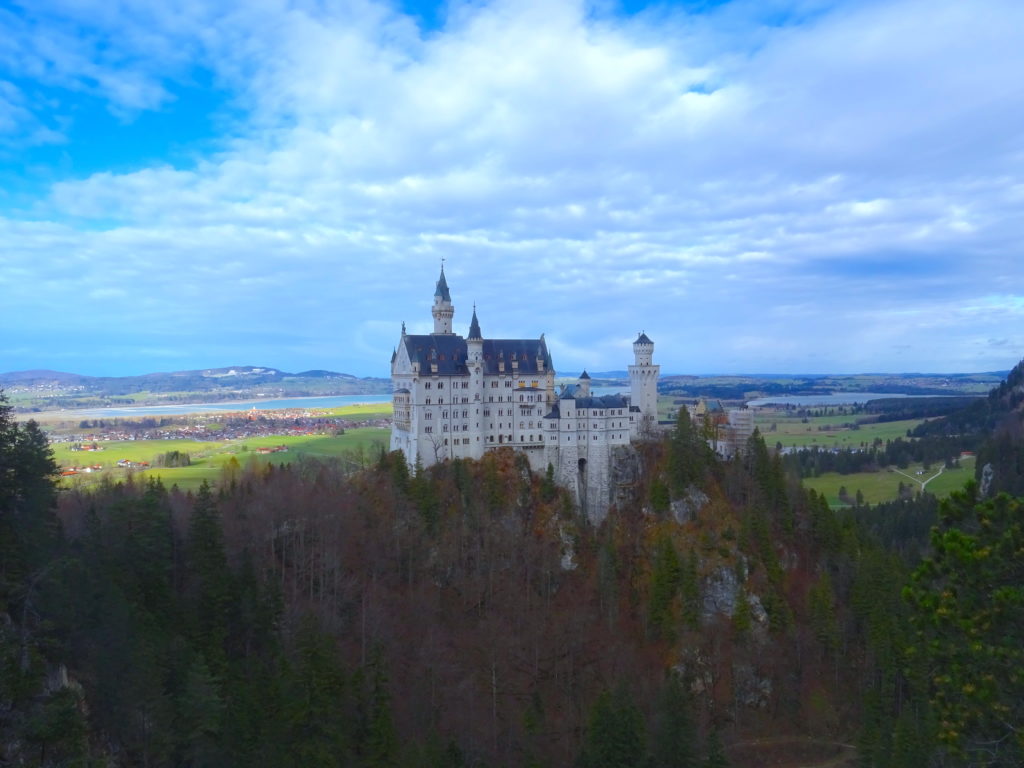 The captivating castle inspired Walt Disney, you can easily see why. 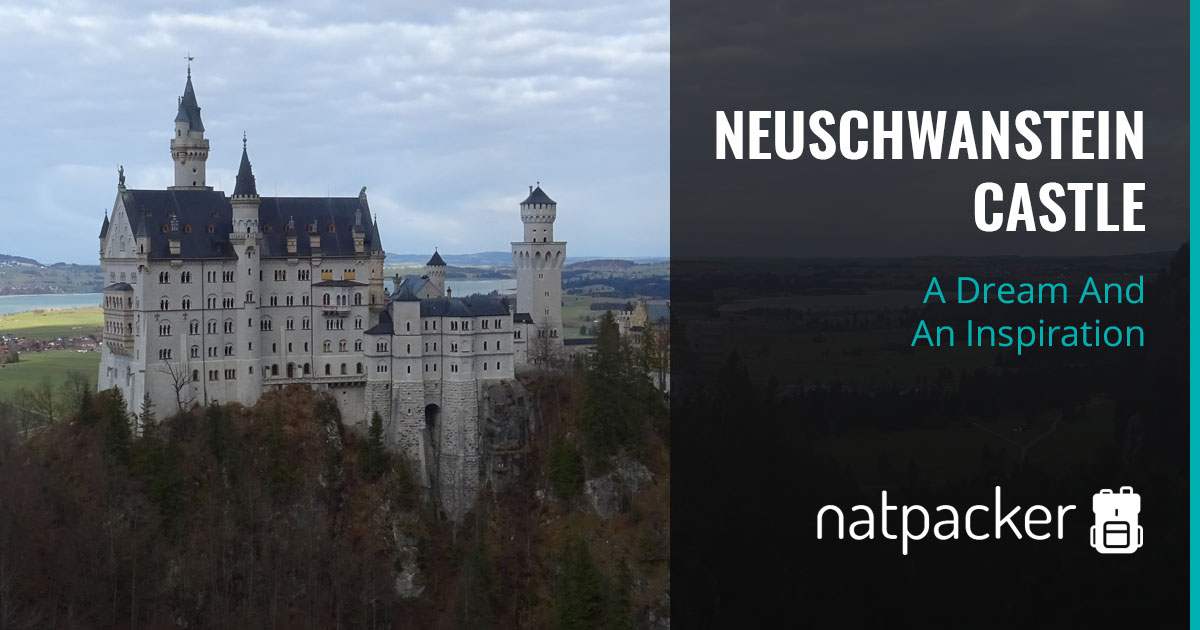