The famous Peabody Ducks are a wonderful sight, as they waddle from the elevator to the fountain and back again. They stay and play in the fountain all day! What started as a joke has become a long standing tradition! You can see these ducks and the famous Peabody Duck March in the Grand Lobby at the Peabody Hotel in Memphis. You don’t have to stay in the hotel to see the Ducks, but if you want to splash out and treat yourself you can!

How The Peabody Ducks Began

In 1935 the general manager of the Peabody Hotel, Frank Schutt, and a friend, Chip Barwick, returned from a hunting weekend. When they arrived at the hotel, they had already had one too much to drink (it is claimed that they’d had too much Jack Daniels) and thought it would be funny if they put some of the live decoy ducks (the use of live decoys was legal in America at this time) in the fountain.

The first Peabody Ducks were three small English call ducks. The reaction from the guest was as unexpected as the joke – they loved the ducks in the fountain of the Grand Lobby! Not long after the original joke, the call ducks were replaced by five North American Mallards.

In 1940, Bellman Edward Pembroke offered to help drive the ducks to the fountain each morning and back to their pen at night. This soon became the famous Peabody Duck March. Pembroke served as Duckmaster until 1991 when he retired. But this didn’t stop the March of the Peabody Ducks! 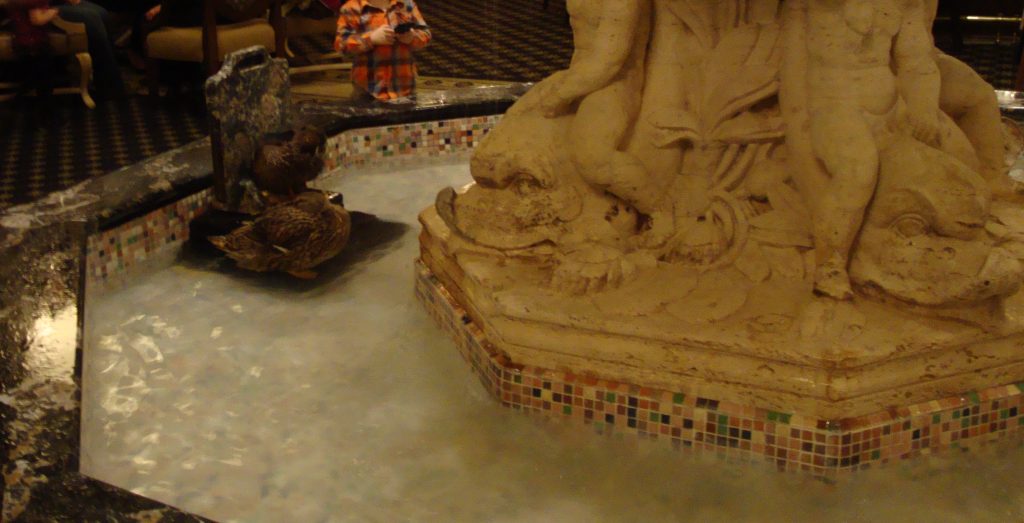 The Peabody Ducks still consist of five North American Mallards – one drake and four hens. The ducks are not domesticated and so are not treated as pets and are not named. The ducks are raised by a local farmer and spend three months living the life of luxury at the Peabody Hotel. After three months they are retired and live as wild ducks on their original farm.

When they are not playing in the fountain the Peabody Ducks live in the ‘Royal Duck Palace’ on the hotel roof – which you can also visit. This pen cost $200,000 and is made from marble and glass. It even has it’s own fountain and a ‘house’ which is a replica of the Peabody Hotel! And all they have to do to spend three months in this luxurious apartment is waddle into the elevator for the morning Duck March and back into the elevator in the evening! They are so special that they even get the red carpet treatment during their march! The marches run at 11am and 5pm everyday.

The hotel even offer a ‘Ducky Day Family Package’! This package includes one nights accommodation and you get to help the Duckmaster on one of the Marches!

Duck is never on the menu a the Peabody Hotel Restaurant – it might upset their VIP guests! 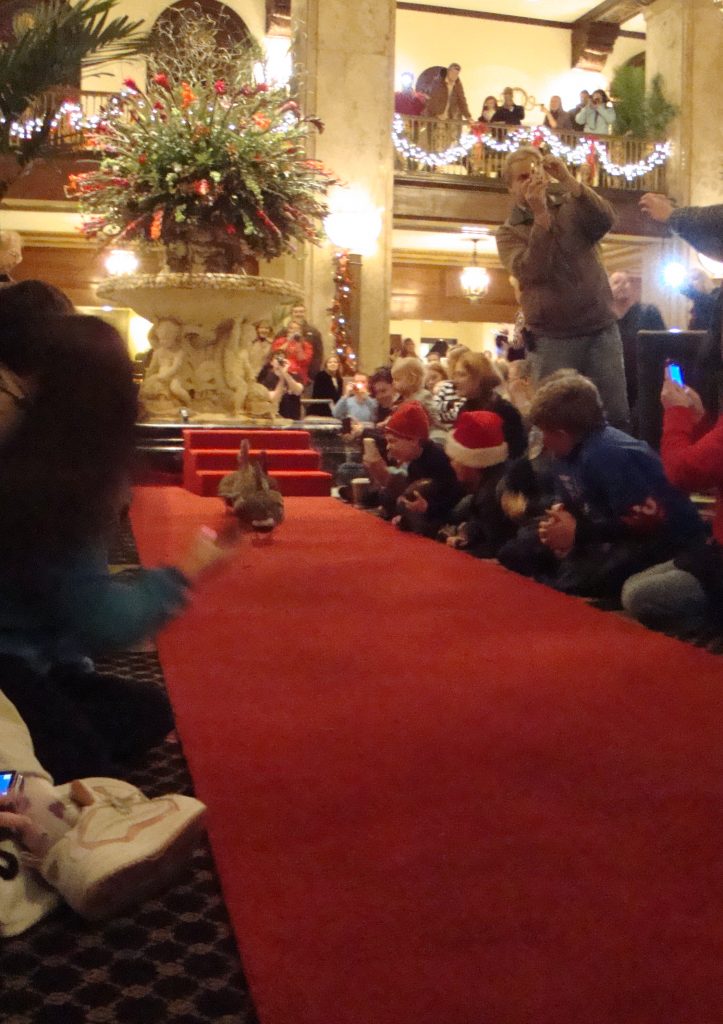 There’s more to Memphis than Elvis, blues and soul, there’s the Peabody Ducks! It doesn’t take much time to go and see them, and the March is over quick, but it’s a wonderfully quirky tradition that is worth a look at!

Want to stay here? Check out the reviews on Tripadvisor! Or if it’s a little above your budget, check out nearby accommodation. 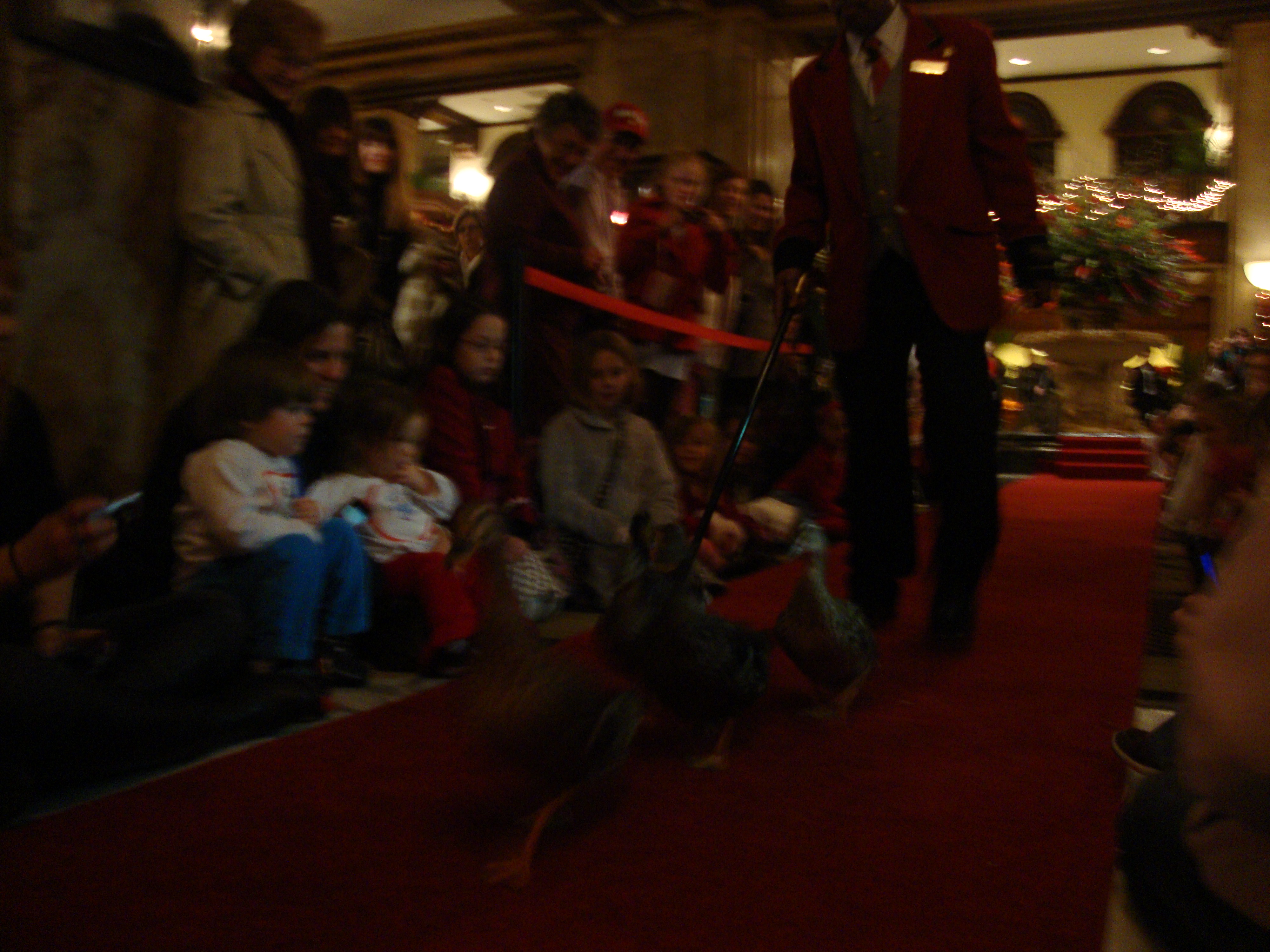