My Highland Fling Adventure Day 3 is the beginning of the Macbackpackers Tour: 5-Day Skye and Highland Fling Tour. The first day of this tours takes the group to Inverness, with plenty of stops along the way!

Missed the previous days of the adventure? Follow the links to go back:

We were up too early for breakfast and so headed over to the Castle Rock Hostel, which was where the tour would begin. We arrived with plenty of time and so waited in the common room, which was slowly filling up with other people!

The bus arrived and we were all called. So we grabbed our bags and joined the crowd waiting to load up the bus. Bags were thrown in and everyone climbed aboard. Then we had a intro to our guide, Graeme. Firstly, he told us how to correctly pronounce his name, as he will not answer to Greyhem as that is the English version of his name! He told us that the more energetic we were, the more energetic he would be, he seemed like a fun guy. After introducing himself he asked each person where they were from and what they did, making sure he had a small conversation with everyone. There was quite a mix of people!

He then jumped in the driver’s seat and the adventure began! He was very talkative and pointed lots out before we’d even left the city. And when he decided to have a break from talking he put on some good music. Well, I liked his taste in music, it was similar to mine!

Our first stop was Dunkeld. Here Graeme told us about the cathedral and shops and bakeries that we good. He advised us to take some time walking around and getting lunch and snacks if we wanted.

We then headed back along the main street. This definitely seemed to be more of a food stop than for the Cathedral. There wasn’t much to see really, but it was a pretty village. We all arrived back at the bus ready to carry on with the journey. 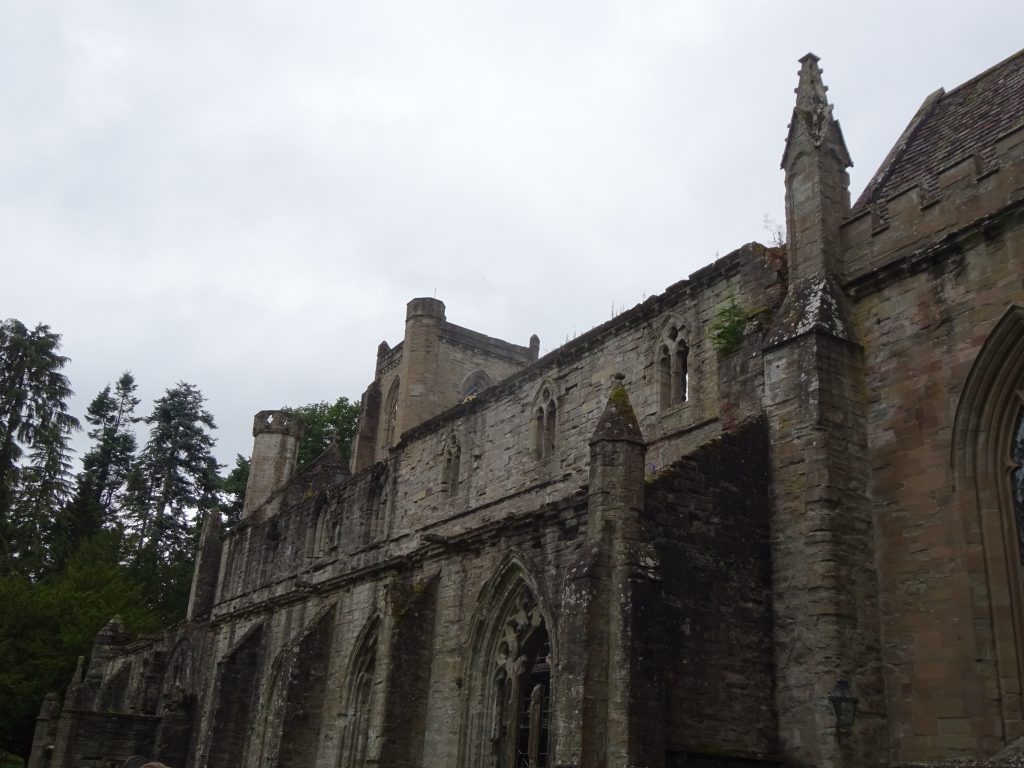 Unfortunately, I didn’t get the name of the next stop, but I really enjoyed it! We stopped at a village of ‘Black Houses’. It was quite a walk from the carpark to the village itself, but a nice walk through a forest.

The ‘Black Houses’ are so called because they would burn fires inside, which would stain the walls black, although this is debated. They are traditional highland houses, made from stone. In this village there were plenty of houses to explore. There were also actors who were dressed in old highland dress who would answer questions. There was plenty to do in the houses too. We explored each one. 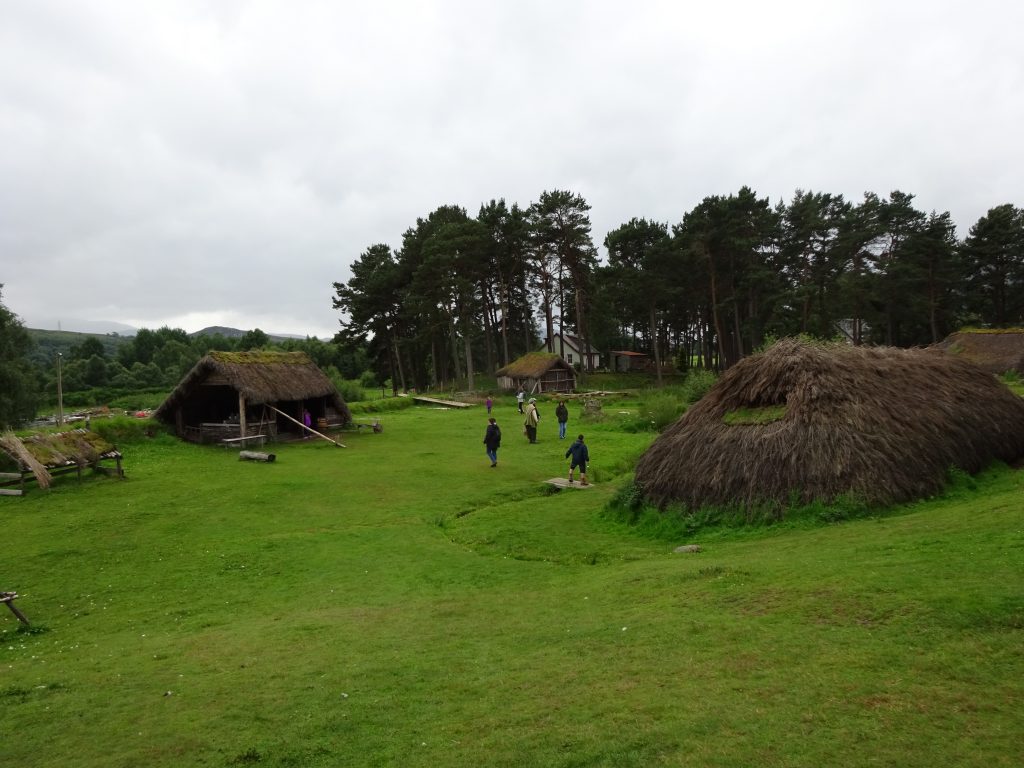 My favourite house was one in which a woman was treating wool. She wasn’t just acting, she was actually doing it. She told us all about the process and let us feel the wool at different stages. The wool would be boiled, which makes it easier to untangle. She also should us the different natural dyes that would have been used, such as heather. A lot of traditional styles still use similar colours.

On the walk back, we took a slightly different path and I’m glad we did! We came across a Red Squirrel and he was a bit of a poser too, which obviously made me happy! 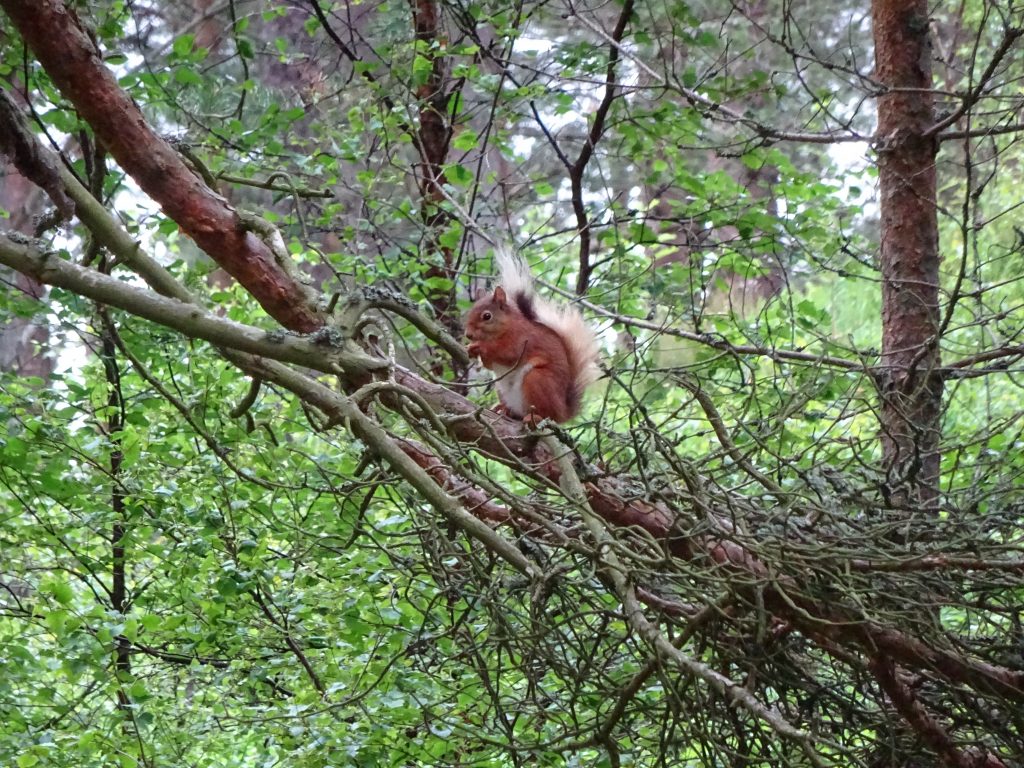 Our next stop was Tomatin Distillery. As we arrived Graeme told us a little about whisky, or ‘Uisce Beatha’ which is the Scottish Gaelic for whisky. It translates as ‘water of life’. He told us a little about the process, but mainly about the Angels Share. As whisky is left to mature in the barrels, some evaporates and is lost. The longer it is left, the more disappears, which is why older malts are more expensive, as there is always less. The whisky that evaporates is called the ‘Angels Share’. Graeme has a theory that this is why the weather in Scotland is so unpredictable – the Angels are up there drunk, just pressing random buttons on the weather machine!

To be honest, I was a little disappointed by the lack of time here and lack of tour. We watched a short video about Tomatin and were given one sample each. I expected a bit more. Although I did discover that adding a drop of water does slightly change the flavour of whisky. I wasn’t over keen on Tomatin though… 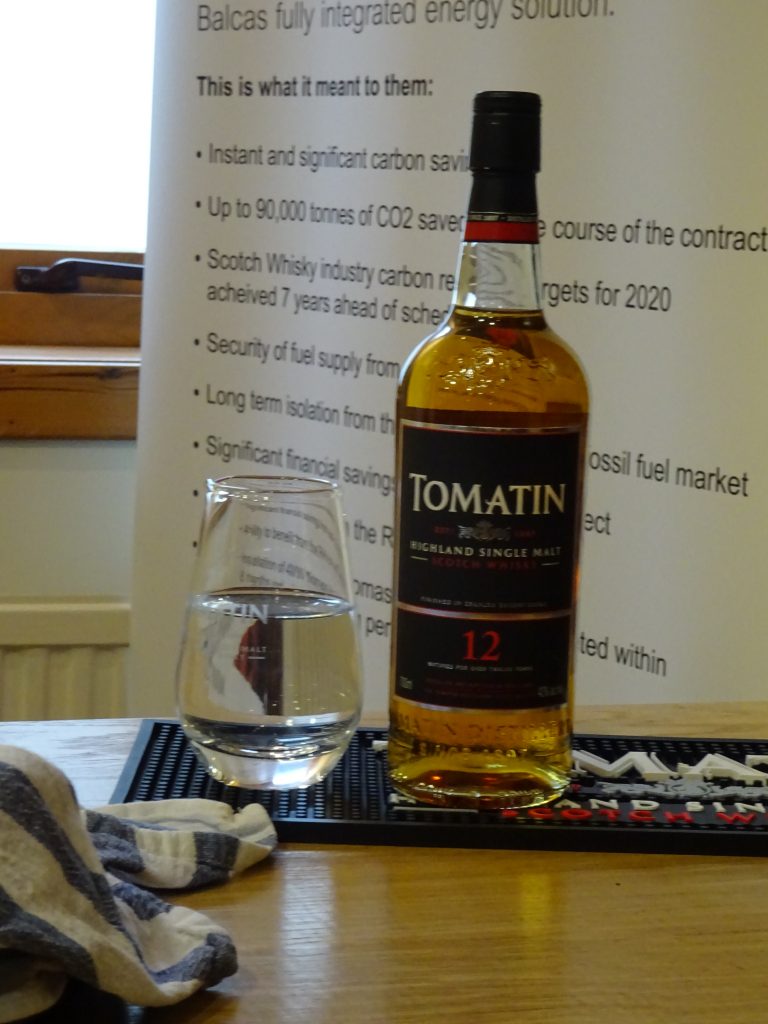 The Monster In The Water

Back on the bus we all started chatting a little more, a wee dram is a big help! We had a bit of a drive before we reached the next stop – Loch Ness. Graeme also know a guy who was determined that the Loch Ness Monster is a giant catfish. He has a hut on the Loch. However, he was not there when we arrived at the amazing viewpoint of the Loch. He arrived as we were moving on, so Graeme and he blocked the entrance as they had a chat!

We then stopped at another viewpoint, this view also had Castle Urquhart. There was no time to go into the castle, but we got a good view of the ruins. 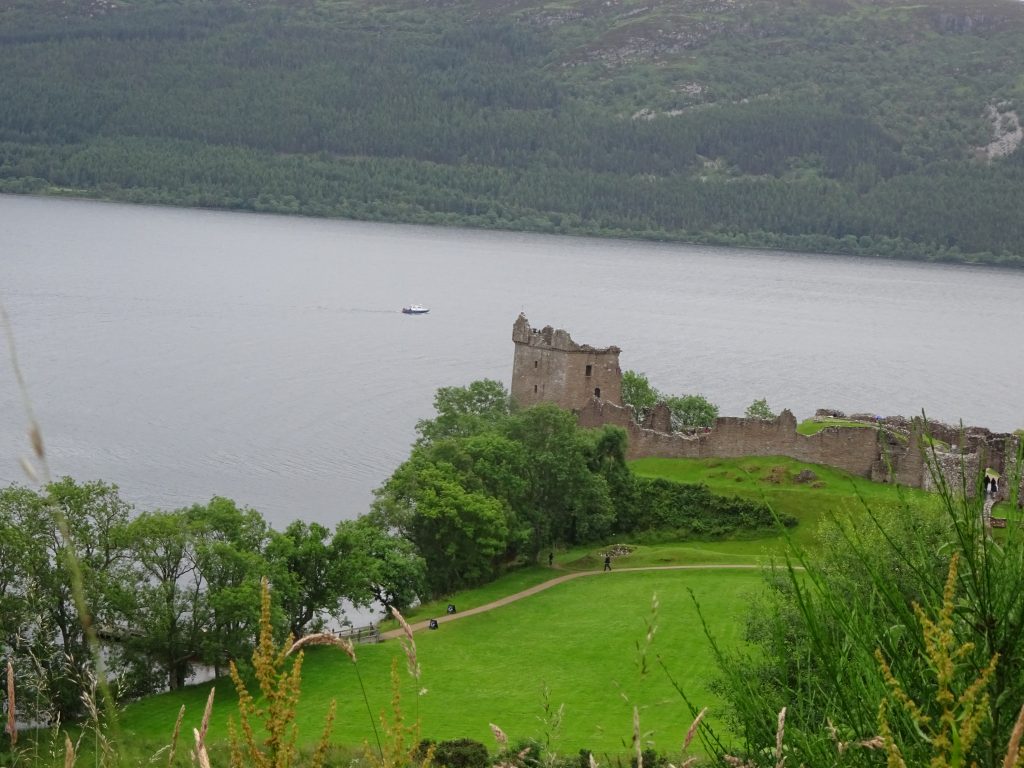 Castle Urquhart On The Shores Of Loch Ness

Next we stopped in a hotel carpark. We had to stop at a hotel as this was the stop where we could go for a swim if we wanted. Me and Dave never pass up a chance for a swim no matter how cold! So those of us that would brave it went and got changed, then met the others at the shore.

There were a few of us that braved the waters. It wasn’t the cold that was the worst part either, it was the rocks that had to be clambered over! But the water was very cold and it wasn’t even a nice and warm July day! So we didn’t stay in too long! And no one was taken by Nessie! Although it definitely is not the cleanest water…

By the looks on the staff at the hotel’s faces when we went back to get changed, I feel that they were not happy with us using their facilities… But oh well! 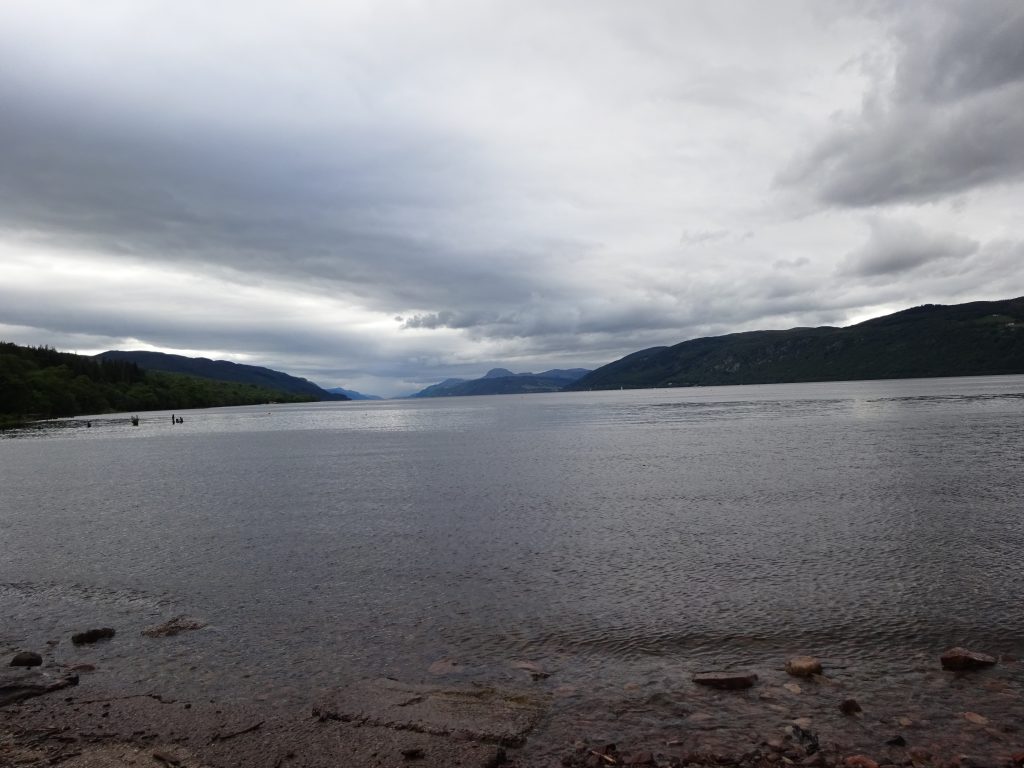 A Night In Inverness

We got back on the bus, slightly damp and quite cold, but luckily it wasn’t far to our final stop, Inverness. We stopped at the Macbackpackers Hostel – Inverness Student Hotel. Here me, Dave and Bunny had messed up slightly! Because Bunny booked himself we weren’t in the same room, and there was no way to remedy it! We had to ring ahead to the next hostel to make sure the next night we would be together.

As we were arriving, Graeme told us the basics of the city. Like where to go to eat, nearby shops and more.

But it was no big deal. Me and Dave went for much needed showers, which were actually very decent! Then we met up with Bunny and headed out into Inverness. 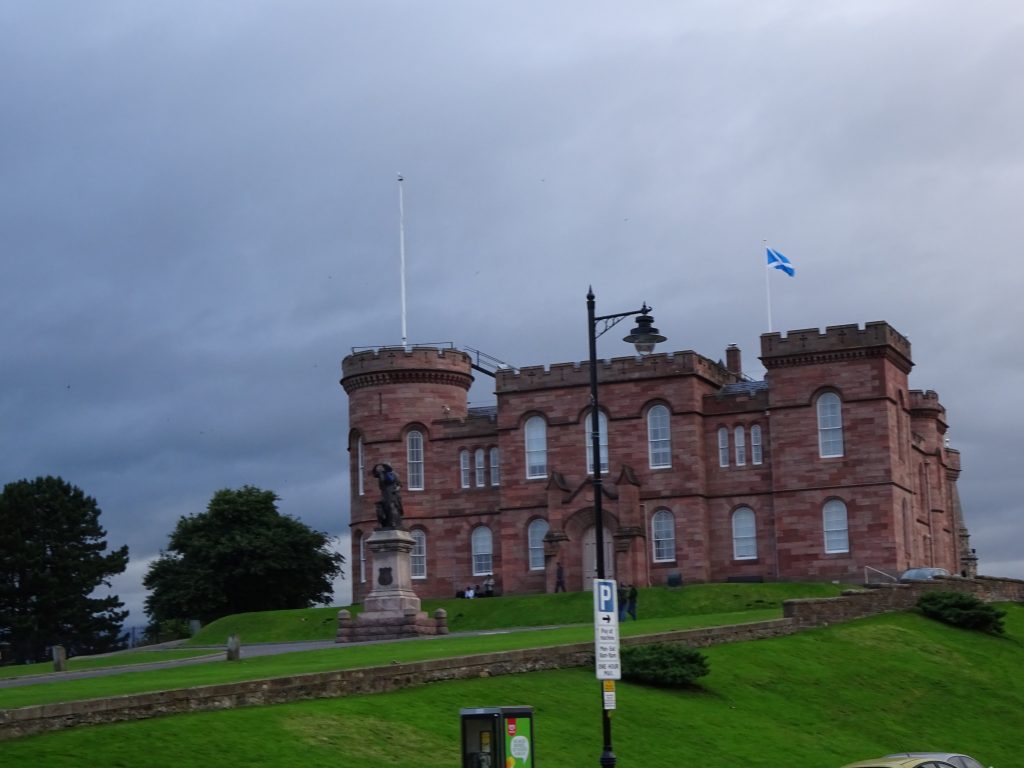 There didn’t seem to be much going on in Inverness. It was rather quiet, But the three of us headed over to one of the pubs Graeme recommended – Hootananny. Unfortunately they had already stopped serving food, and this was before 8:30pm! They couldn’t even tell us where might still be serving!

Luckily, just a little down the street we found The Room, which were just about to stop serving, but let us in. For which we were very grateful! I had a steak, which was pretty good.

After we finished, we headed back to Hootananny. Here we meet several others from our tour. It was good to have a chat with some other people – bonding with the group. Although when I ordered a whisky and coke, the staff not only looked at me as if I’d spat in her face she flat out said no! I have been told on a few distillery tours that whisky is to be enjoyed how you like it, whether that is straight, with water or any mixer.

Other than that, it was quite a fun little pub. I think we found all the population of Inverness in here! And there were a group of guys sat round a table and jamming. So there was even some entertainment.

We stayed fairly late. As we headed back we passed the castle, which had three rabbits on the grass. So I had fun watching them for a little while. We then passed the Castle Tavern, which was still open, so we heading in for one more drink before bed. This was another fun pub, what I like to call an ‘Old Man Pub’. The sort that has a few locals that always sit in the same spot, you know what I mean? It had that feel to it, but I don’t mean that in a bad way, these are normally great fun and cheap!

But that was the final part of the day’s adventuring! 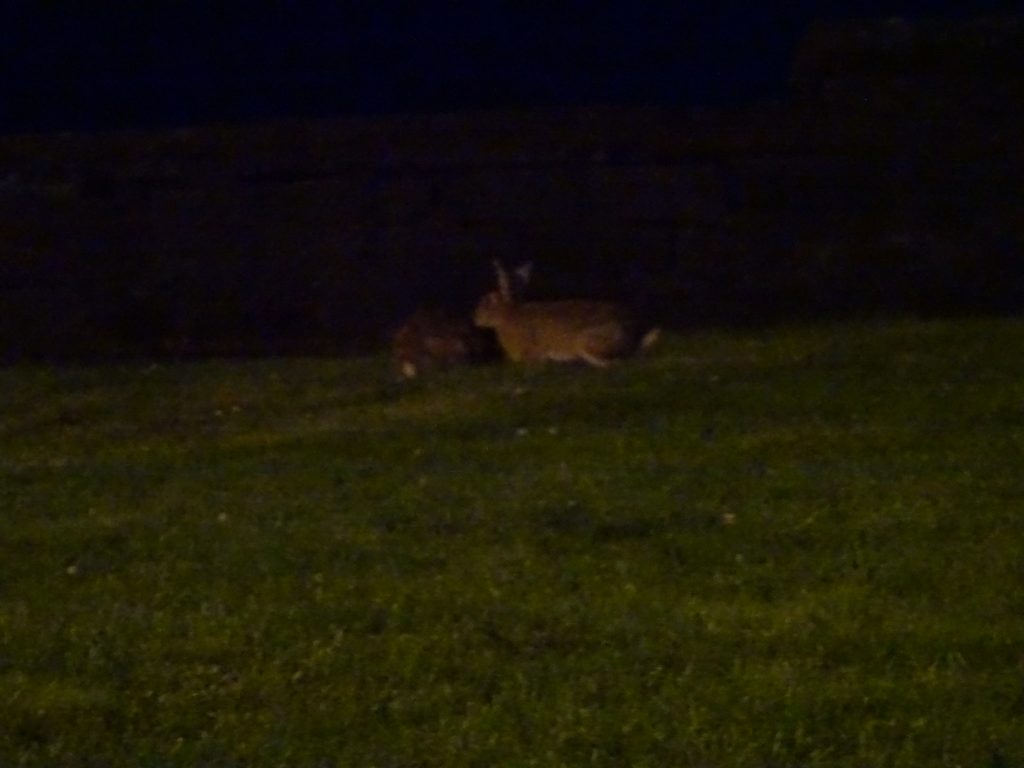 Want to know what happened next? Go to Day 4 to find out! 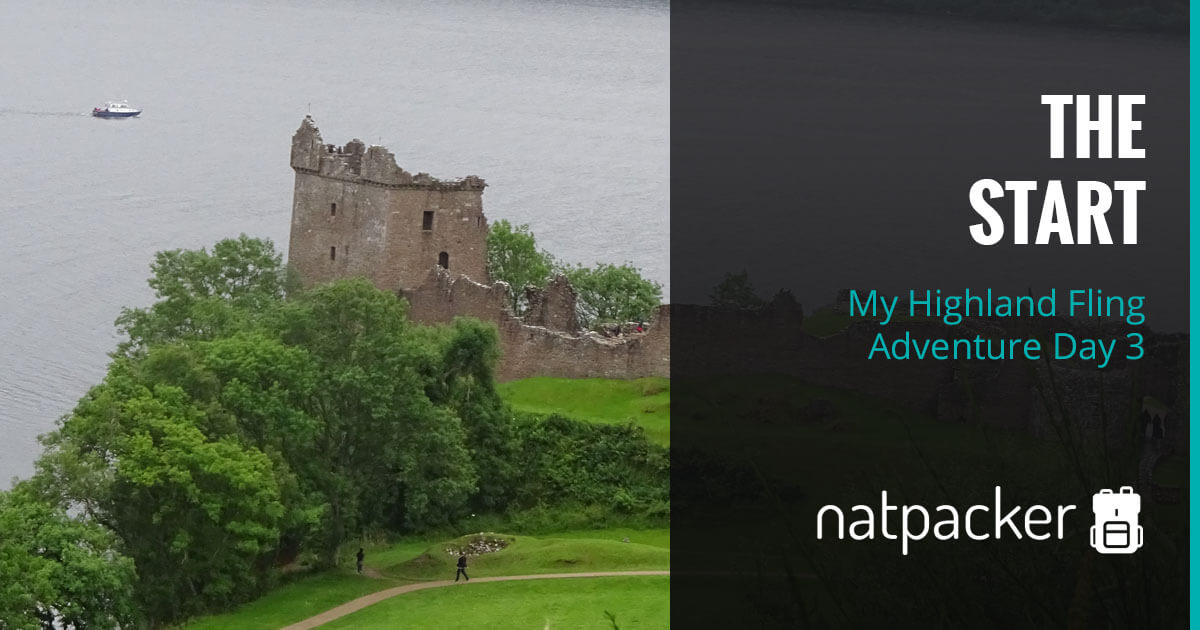