My Highland Fling Adventure Day 5 is a full day on the Isle of Skye with Macbackpackers! From Faerie Pools to whisky, the Old Man Of Storr to Kilt Rock, Graeme really new the island and it’s stories!

Not read the previous day’s adventures? Follow the links to go back:

The Tale Of Saucy Mary

We got on the road nice and early – Graeme had advised us to be up early as it would mean more time to do everything he could fit in on Skye. As we got underway he pointed out the other pub in Kyleakin – Saucy Mary. His story voice was turned on and he told us the tale…

Mary was a Norse Princess who married a Scottish Clan Chief at Kyleakin. Together they owned Castle Moil in Kyleakin and from this fortress they placed a heavy chain across to the mainland. This was done to stop ships passing through the sound without paying a heavy toll. Not very saucy, right? But to reward the captains for paying the toll, Mary is said to have flashed the ships as they passed!

Another Story At Sligachan Bridge

We stopped at Sligachan Hotel and Graeme led us across the road and to the banks of the river. Here he pointed out Red Cuillin which was straight ahead, which is part of the Cuillin Range. He told us that a guy actually ran up this once, no small feat considering it is a perfect conical shaped mountain! 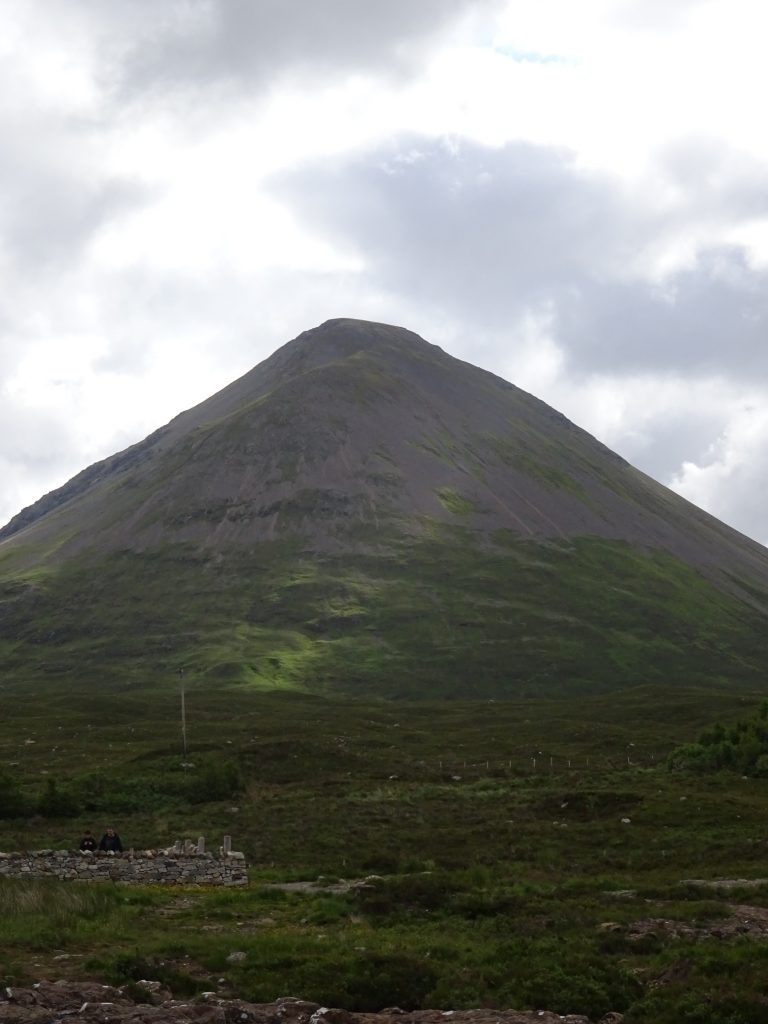 He also told us a legend of Cuillin and the waters that we were at the edge of. Cuillin (or Cúchulainn) was Irish warrior, who heard the tales of the best Scottish warrior woman Scáthach. He decided to prove he was better than her by going over to Scotland and challenging her to battle. She accepted. They fought and fought, eventually Scáthachs daughter believed that her mother would be killed and so ran down to the river and cried.

Some Kelpies in the water heard her cries and came to her aid. They told her to wash her face in the water, which she did and then she was filled with the knowledge of how to stop the battle. She went back home and cooked, wafting the smoke into the valley where the combatants were fighting. The warriors realised how hungry they were and both headed to the house. They both ate and since Cuillin ate under Scáthachs roof he became her guest and they could now do each other no harm. Graeme told us that you can still gain some faerie magic, in the form of eternal beauty (interpret beauty however you like, but it doesn’t have to mean physical)! You just have to wash your face in the waters by the old Sligachan Bridge. However, you have to dunk your face in or it won’t work. And you have to let your face dry naturally, no wiping! I clambered straight down the rocks for some faerie magic – I love stuff like this – and I wasn’t the only one to give it a try! 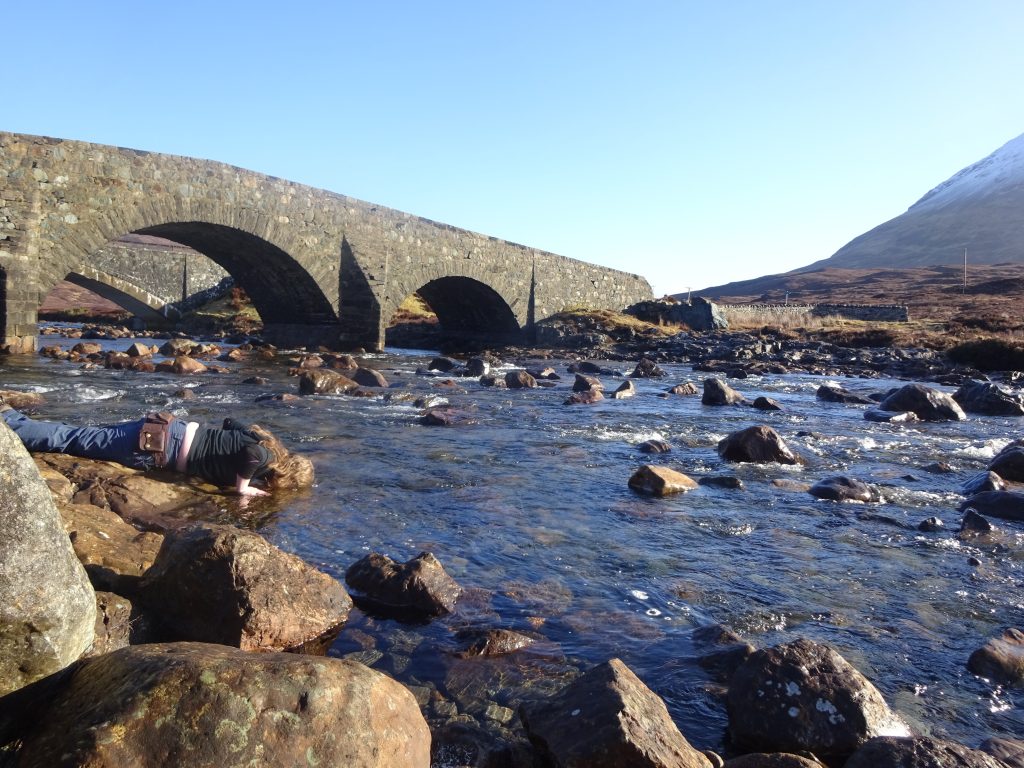 Dipping My Face In The Water To Gain The Faerie Magic!

So with faces that were dripping wet we headed back to the bus. Our next stop was another magical place, the Fairy Pools (or as I prefer Faerie Pools).

It was horrible weather, so the three of us donned our waterproofs (we were very prepared for Scottish weather) and set of. I must admit, I fell in love with the faerie pools. There are many pools and waterfalls along the walk, some big, some small, all beautiful. You can actually swim in the pools too! 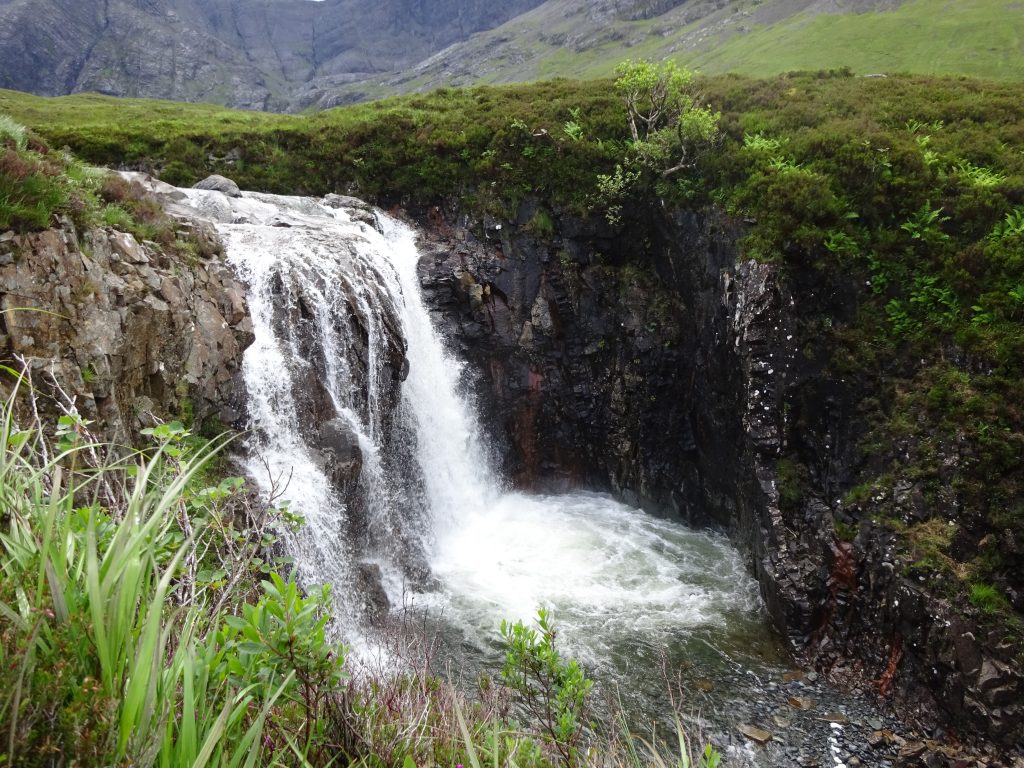 One Of The Faerie Pools

It doesn’t take too long to get to the main pool, but we had plenty of time so carried on. Plus it was far too cold for a swim in the pool!

There was a point where we had to go over stepping stones, I’m glad I wasn’t my usual clumsy self! All too soon it was time to head back to the bus, but at least we got to admire the pools and waterfalls from a different direction – and normally I much prefer circular walks than there and back again. 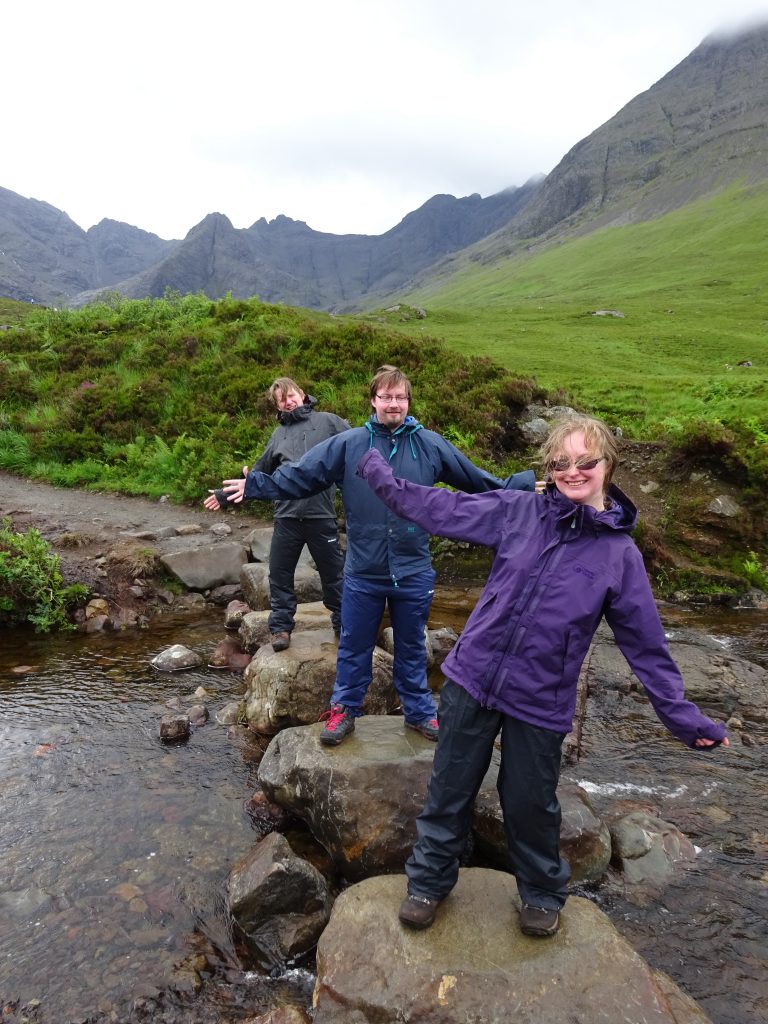 Stepping Stones At The Faerie Pools 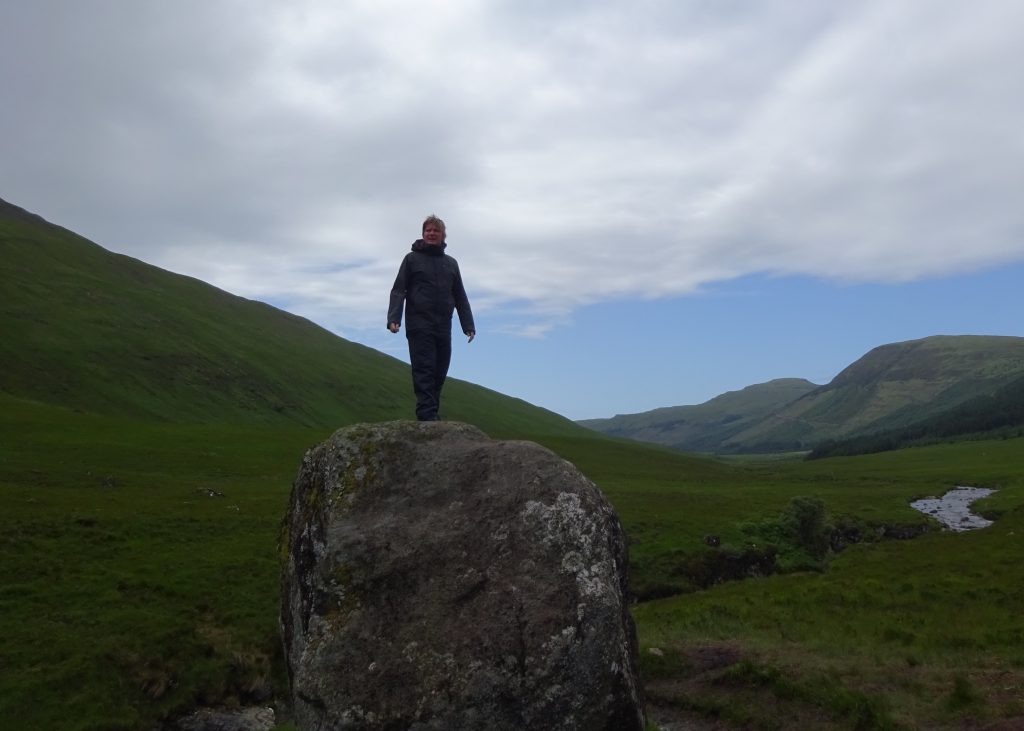 Dave Getting A Good View Of The Faerie Pools

Leaving the Faerie Pools behind us, we headed for the nearby distillery of Talisker. We are only meant to visit one distillery on the tour, so this was a little extra Graeme put in. He basically told us to look around the shop and he would see if he could get us a sample – and he was victorious! It was quite amusing, we literally had our samples and ran! I’m not sure if anyone actually bought anything… 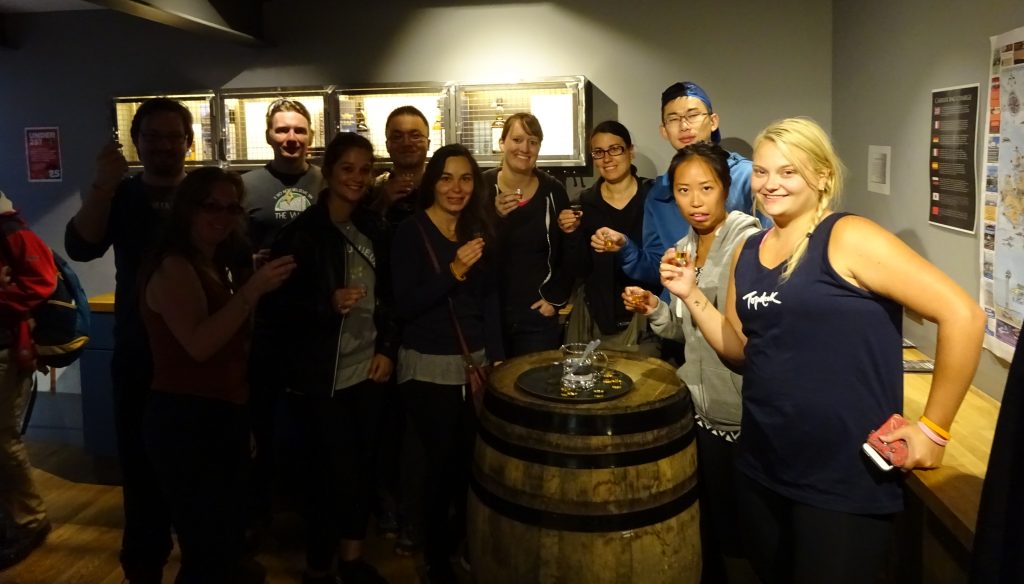 Next we stopped at Portree for lunch. Graeme pointed out his favourite places to eat and told us where a supermarket was.

Since Graeme told us that MacKenzie’s was the BEST bakery, we headed over for some lunch. He was right! It was so good we each had two pasties each! I had a Sweet Thai Chicken Pasty and a Cheese and Leek Birdie. As we stood outside eating our pasties we were joined by Chrissy and Meagan.

After we’d finished we wandered around together and we decided that we would all cook together that night and would invite others to join. So we headed to the supermarket. However, it wasn’t very big and we couldn’t get what we wanted, so we left it. We wanted to invite others too anyway.

We then decided to get ice cream, so we headed to The Parlour, where Graeme had recommended. As we wandered round with our ice creams we realised we were the perfect example of a Scottish holiday – by the coast, with ice creams and wrapped up in waterproofs! 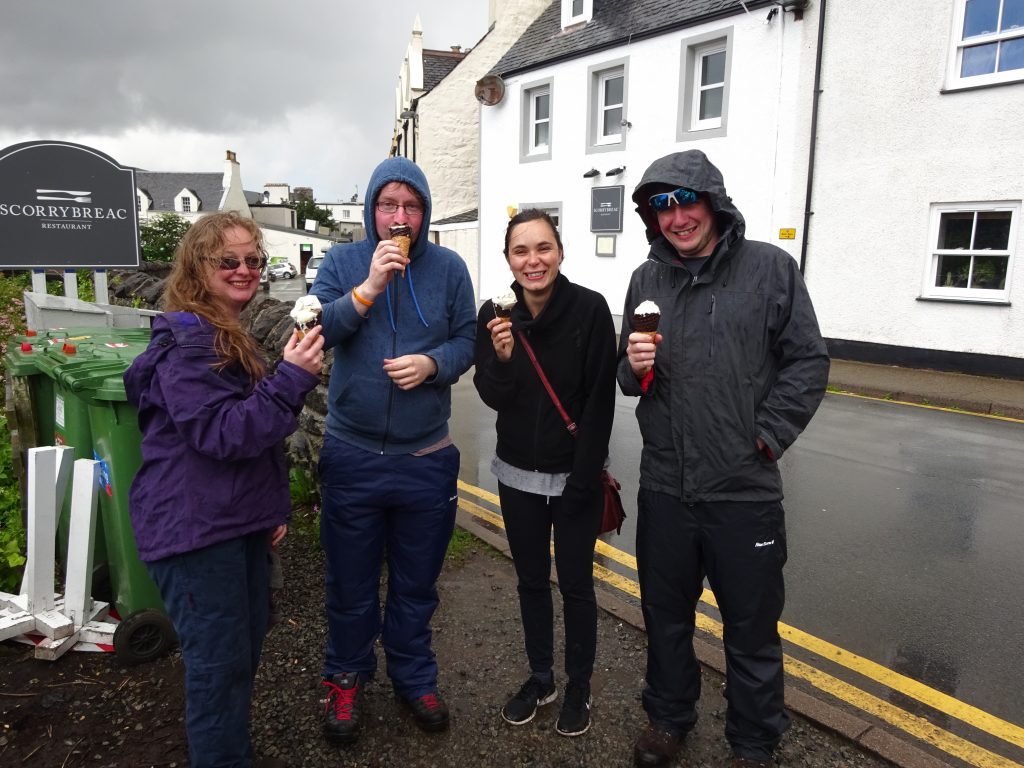 Potree is a pretty little town. With pretty coloured coastal houses. Even in the rain, it was enjoyable. And even though, just like every coastal town, there were very confident seagulls eyeing your food, that’s all part of the fun, right? 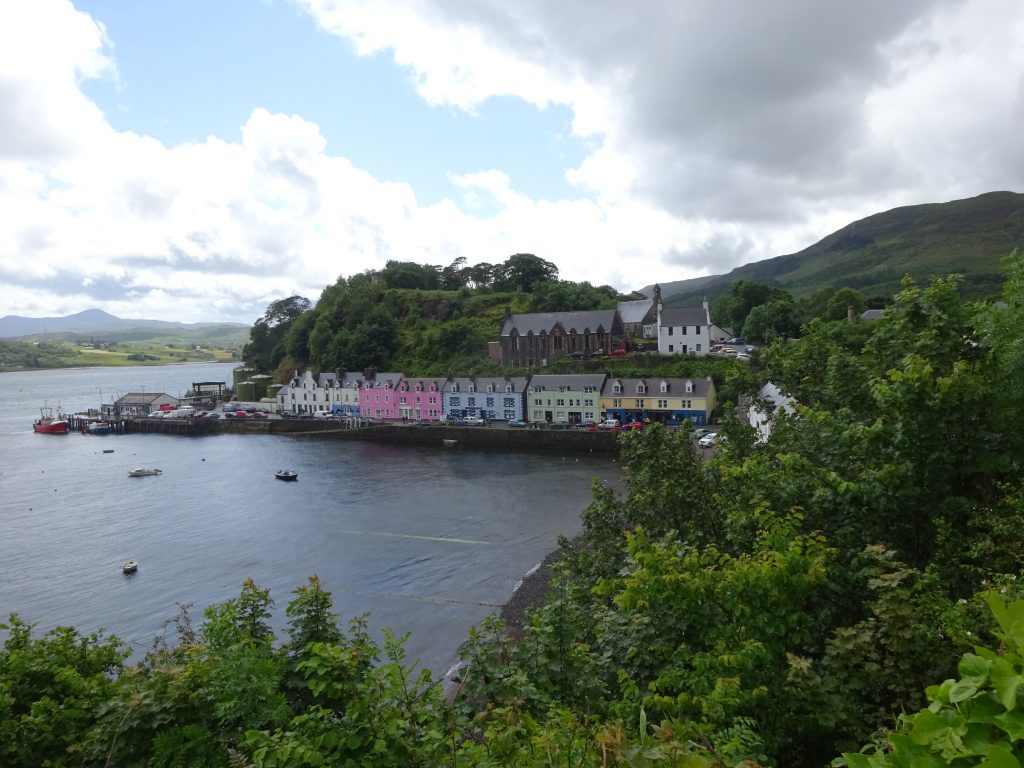 A Rock On A Hill

As we all returned to the bus, we told people about our plan to all cook something to share that night, some people seemed up for it, some didn’t. But we’d wait and see…

We had a short drive to our next destination – the Old Man Of Storr. You can see the Old Man from the carpark and the path is easy to find. So we all set up to reach the Old Man. 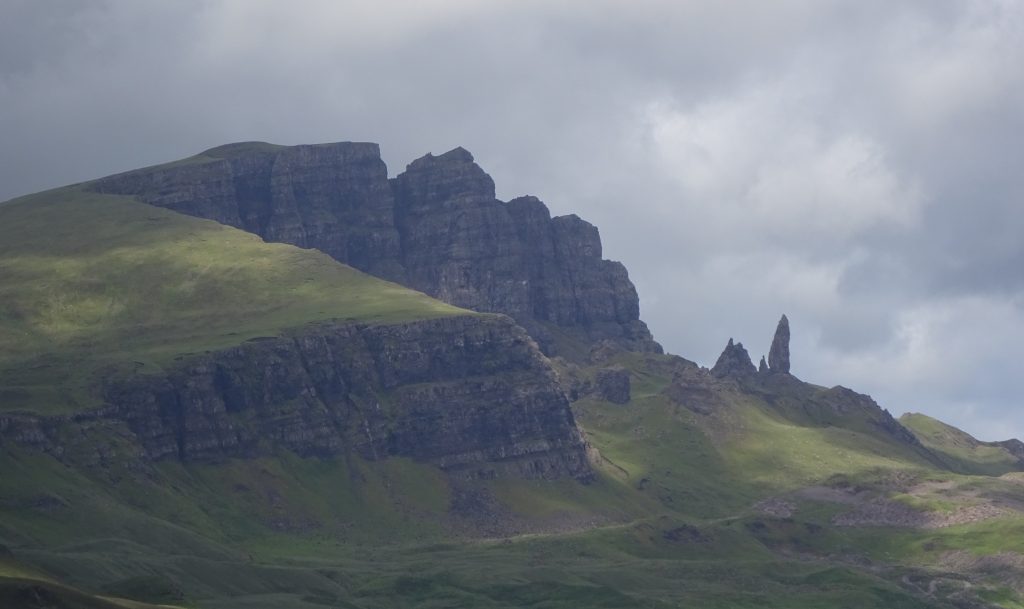 The Old Man Of Storr

It’s not the easiest walk up to the Old Man! It’s quite steep in places and three of the girls on our trip decided to just stay near the bottom, as they didn’t really have the correct footwear. The wind didn’t help either! But it was worth it! You get some beautiful views and not just from the very top.

If you want to literally met the Old Man, it is a bit of a scramble to the base of the rock, and once again worth it for the view. We did this and walked (well, clambered) around the base of the Old Man. I’m shocked we all survived the wind! Then it was time for the descent… 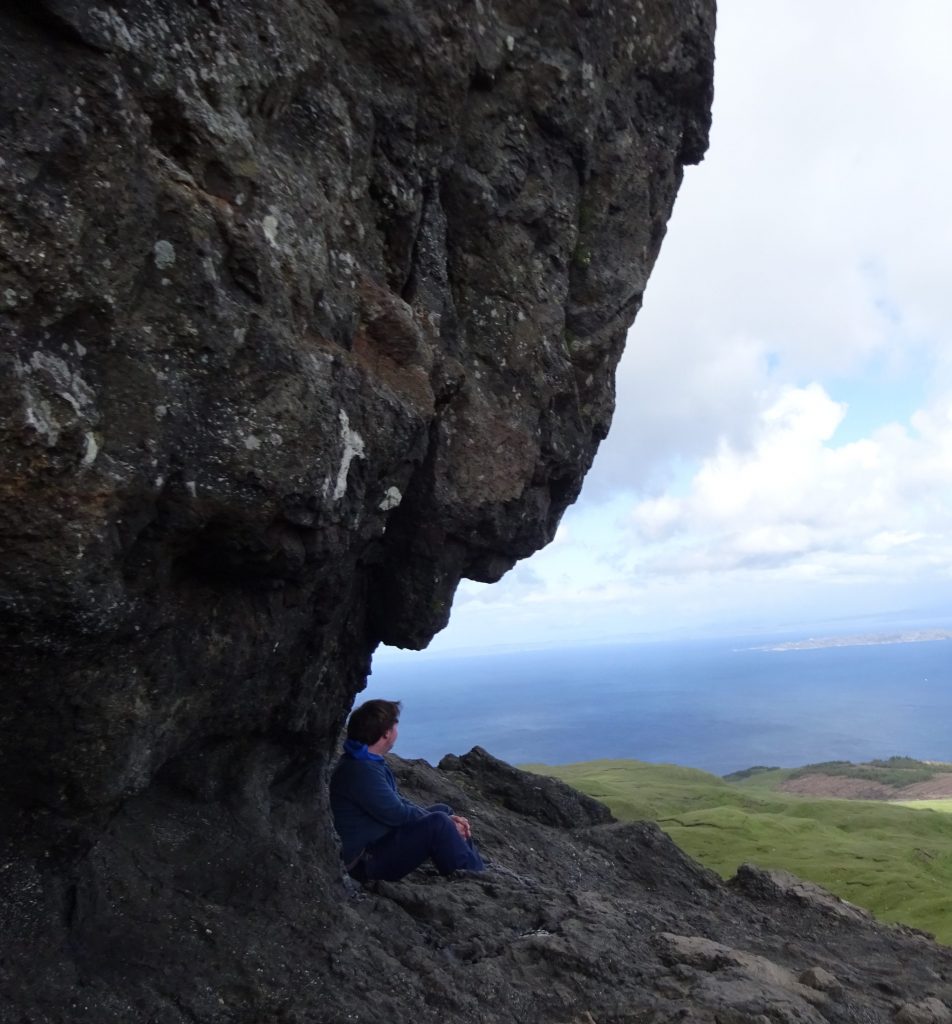 Bunny Taking Shelter From The Wind Under The Old Man 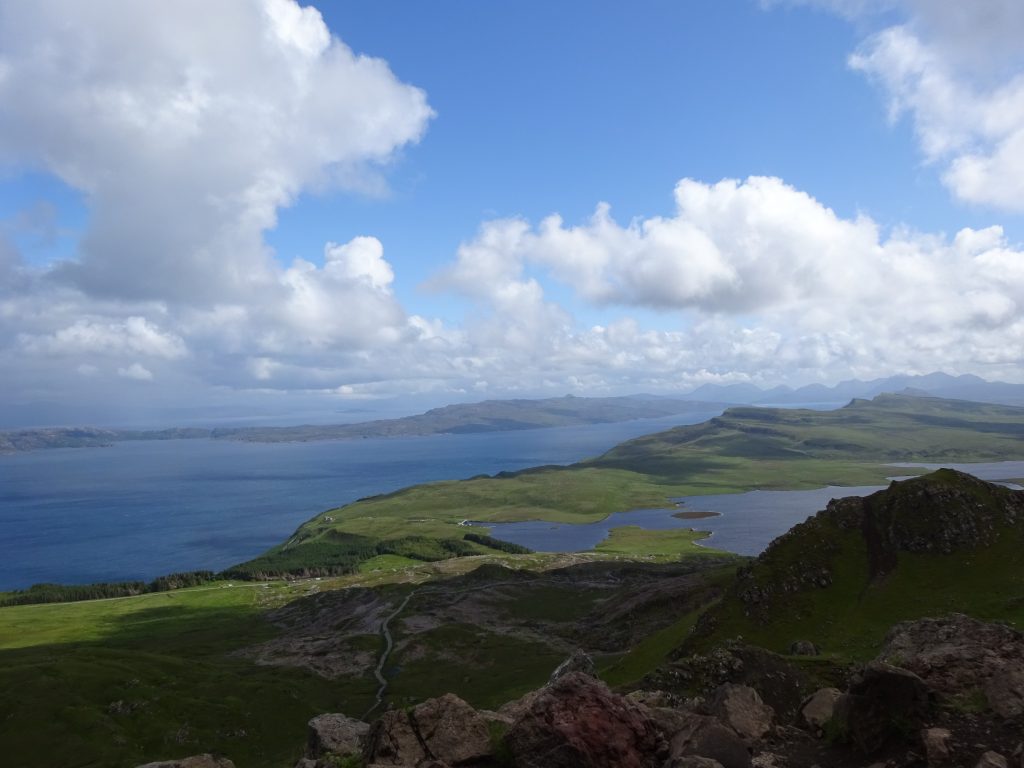 View From The Old Man Of Storr

We all arrived back at the bus, a little tired and windswept, but ready for the next stop! A short bus ride away was Kilt Rock viewpoint. Kilt Rock is a cliff, which has a pleated look about it. There is also a pretty waterfall over the edge. 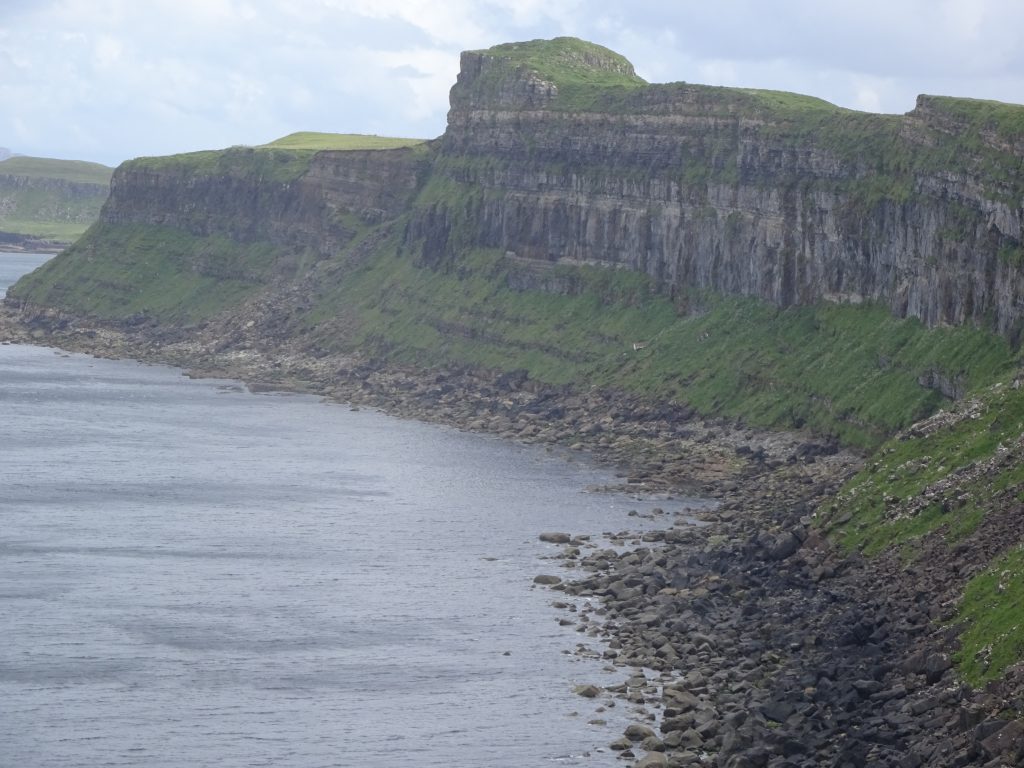 Here there was also a cast of the local Dinosaur Footprints, that were found at Staffin Beach.

It was very pretty here, but once again, very windy! So we soon headed back to the bus!

Graeme then drove us up a long, windy hill road. At the top we got out and had a great view of the Quiraing, another rock formation created by a landslide. The rain and wind suddenly became worth is as there was a rainbow. Looking down the way we had come you could also see a heart shaped pond, which I thought was very pretty. 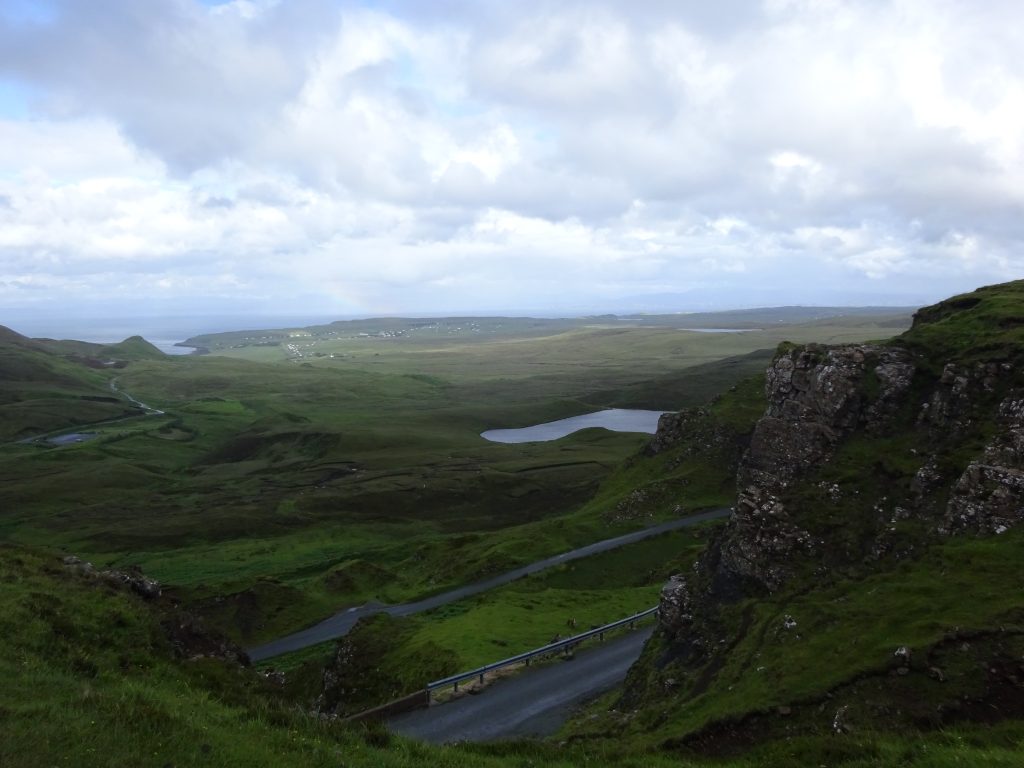 Heart Shaped Lake, Near The Quiraing

Graeme took this time to tell us a couple of stories about a local clan MacLeod. I had come to look forward to what we called ‘Story Time’, as Graeme could weave a good yarn!

The MacLeod clan motto is “Hold Fast” and it comes from this story. The MacLeod chief went to a gathering of the clans. There was to be feasting and drinking, but in the middle was a man tied to a stake. This man had taken a deer from the hills to feed his family and his punishment was to be gored to death by a bull. MacLeod asked his host if he would free the man to show is generosity. His host told him if he could stop the bull he would set him free. So MacLeod jumped in front of the bull when it charged and the crowd shouted “Hold fast MacLeod”, which he did and so saved the prisoner.

He also told us about MacLeods Table, which unfortunately we had not seen. This was a different clan chief. The chief visited James V in Edinburgh and a nobleman commented that MacLeod must be impressed by such a large table, expensive silver candlesticks and the beautiful ceiling, as surely the clansman would never have seen such riches before. MacLeod boasted that what he had was better, so the James took his court to see.

When the king and his men arrived MacLeod took them, not to the castle, but to the top of the tall, flat rock formation that is called MacLeods Table, where a banquet was ready. MacLeod stated the size of his table, pointed to the men holding torches, say how much more valuable they were than silver. Then he pointed to the starry sky and said that his ceiling had been painted by God. James V could only agree that MacLeods riches were indeed greater.

We set off again and arrived shortly in Uig. Here Graeme took us into the Skye Brewery shop. As I’m not a beer drinker, this wasn’t great for me, but Bunny and Dave got a few.

When we got underway again, we asked if Graeme could stop at a supermarket on the way back, as us three, Chrissy and Meagan still wanted to cook together. So he stopped at a big supermarket outside Kyleakin.

We got back to Lochbuie Guesthouse (part of Skye Backpackers) and the five of us started with our planned evening. It was a little disappointing that no one else joined us, but we still had a good time. Meagan made Minestrone, Chrissy made a salad and me, Dave and Bunny did a massive Shepherd’s Pie. And there was quite a bit of drink flowing!

We did quite well, with everything ready at the same time, so we put it on the table and helped ourselves. As other people went by we offered them some, and a few people joined us for a plate.

After we cleared away we headed into the living room and found some cards. The five of us stayed up quite late playing ‘Cheat’. Others joined us, like Karma. There were also a few Chinese guys who joined us, one it turned out was an accountant. And we soon learnt never to play ‘Cheat’ with an accountant, he just kept winning!

And on that note Day 5 finishes! Go to Day 6, where we wave goodbye to Skye!