My Highland Fling Adventure Day 6 sees the Macbackpackers group wave goodbye to Skye and explore the West of Scotland. The day comprises of fantastic scenery, memorials, glens and finished with a Ceilidh.

Miss the previous installments of this adventure? You can go back here:

It was quite sad having to wave goodbye to Skye as we set off from the Lochbuie Guesthouse (Skye Backpackers). I loved this island and wanted to see more, but the Macbackpackers tour was now heading to mainland, so I had to go too. I’ll just have to come back at some point… 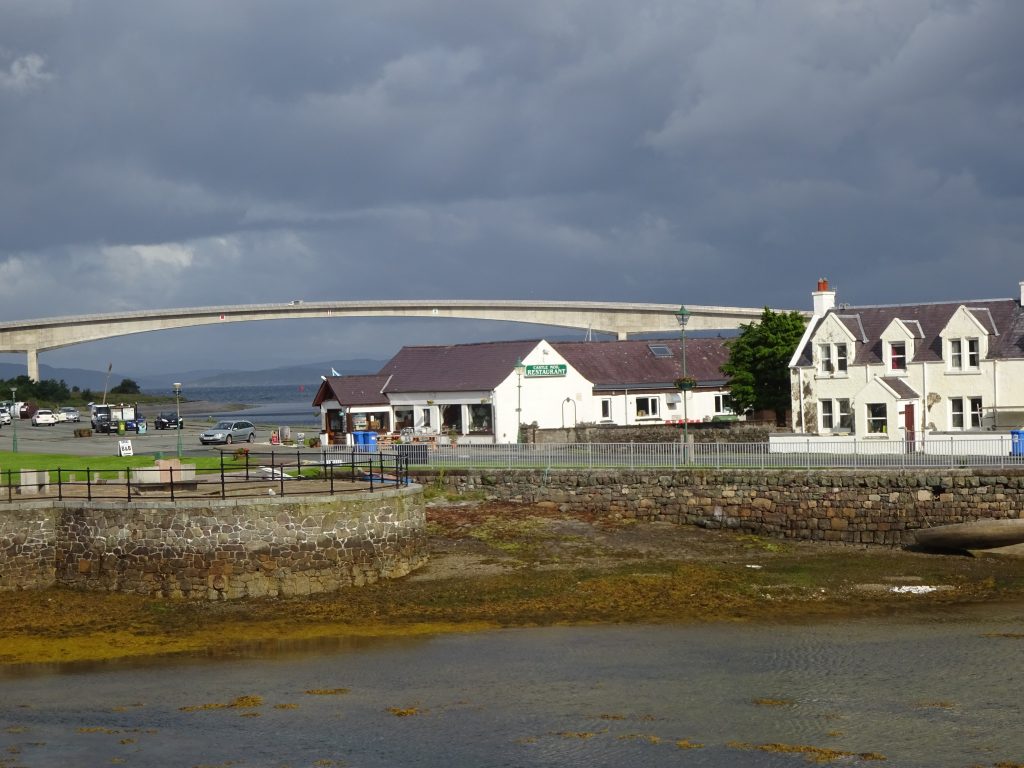 Waving Bye To Skye And The Skye Backpackers Hostel

We pulled up at a lay by, there was a nice view but that was not what this stop was about. Here were piles of rocks – like ones me and Dave had seen on Kilimanjaro. It was the same deal, place a rock on to make a wish. I wonder where this actually originated from?

After a quick wander around, it was time to get back on the bus. Our next stop was a war memorial.

The war memorial had an amazing view of Ben Nevis. But overall, was a bit of a sombre affair, like all war memorials. The number of dead is always staggering. But at least we could admire Ben Nevis too! Ben Nevis In The Clouds, From The War Memorial

Leaving the war memorial behind, our next stop was a little chirpier! We stopped at Glenfinnan at the Bonnie Prince Charlie Monument. But that wasn’t the main attraction for most people here. The viaduct bridge was. This is the bridge that is in the film Harry Potter and the Chamber of Secrets. When Harry and Ron catch up with the Hogwarts Express in the flying car. Not a massive interest for me (I much prefer the books to the films) but a massive deal for some! 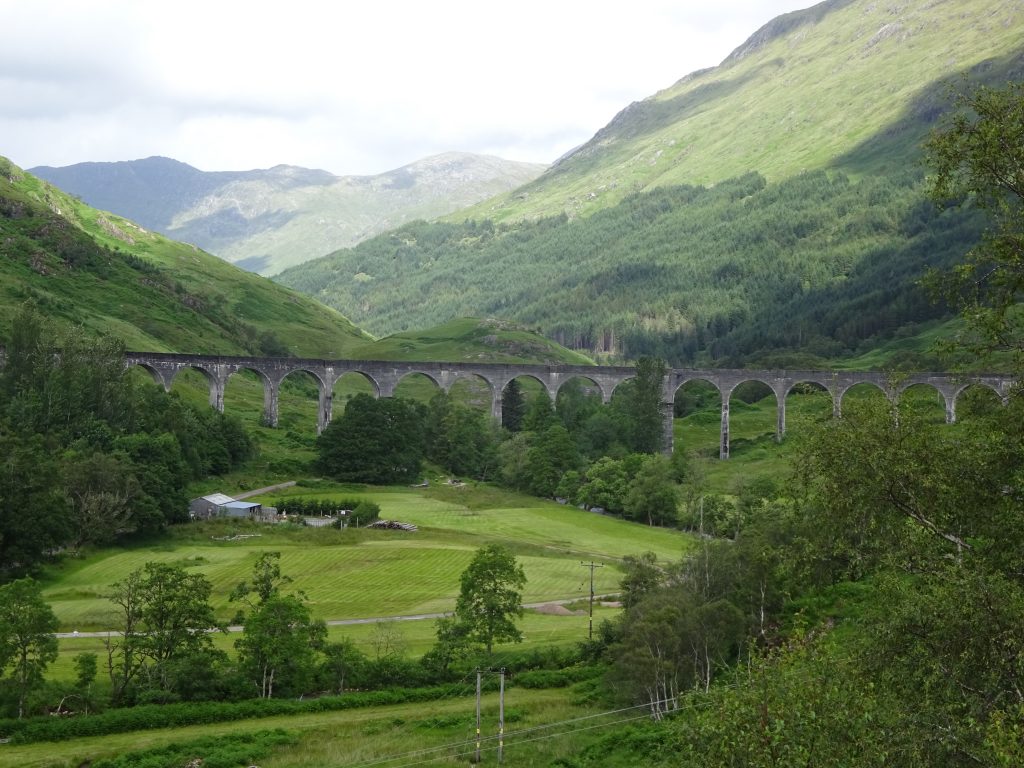 The Harry Potter Bridge At Glenfinnan

So me, Dave, Bunny, Chrissy and Meagan walked up a nearby hill. It was only a small hill, but it was steep and muddy, so we had a few slips and slides, but at the top we had a great view of both the bridge and the monument, so here we sat down and had a picnic. We also had some wine left over from last night, so we shared this around with the food! 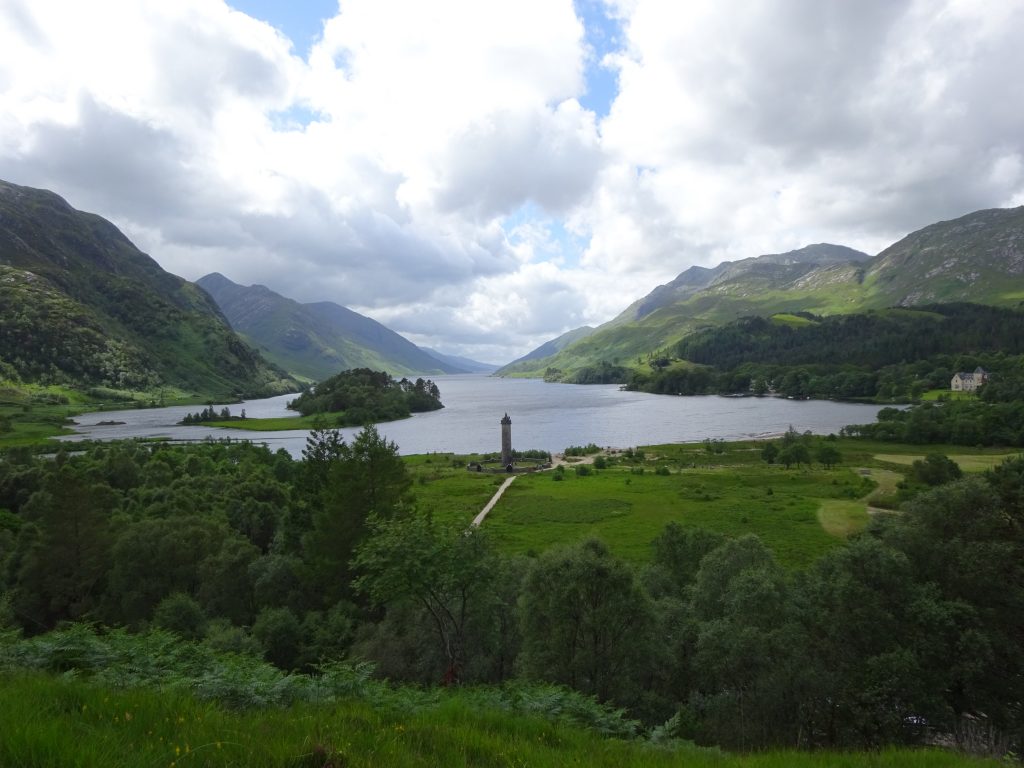 After our picnic lunch, the five of us headed back down – with yet more slipping and sliding! Then we headed across the road to the Bonnie Prince Charlie Monument. The monument is on the edge of a lake, so gives quite a pretty view. We walked around the monument, and Karma joined us at some point. We then spent the rest of our time here skimming stones, which I am awesome at! 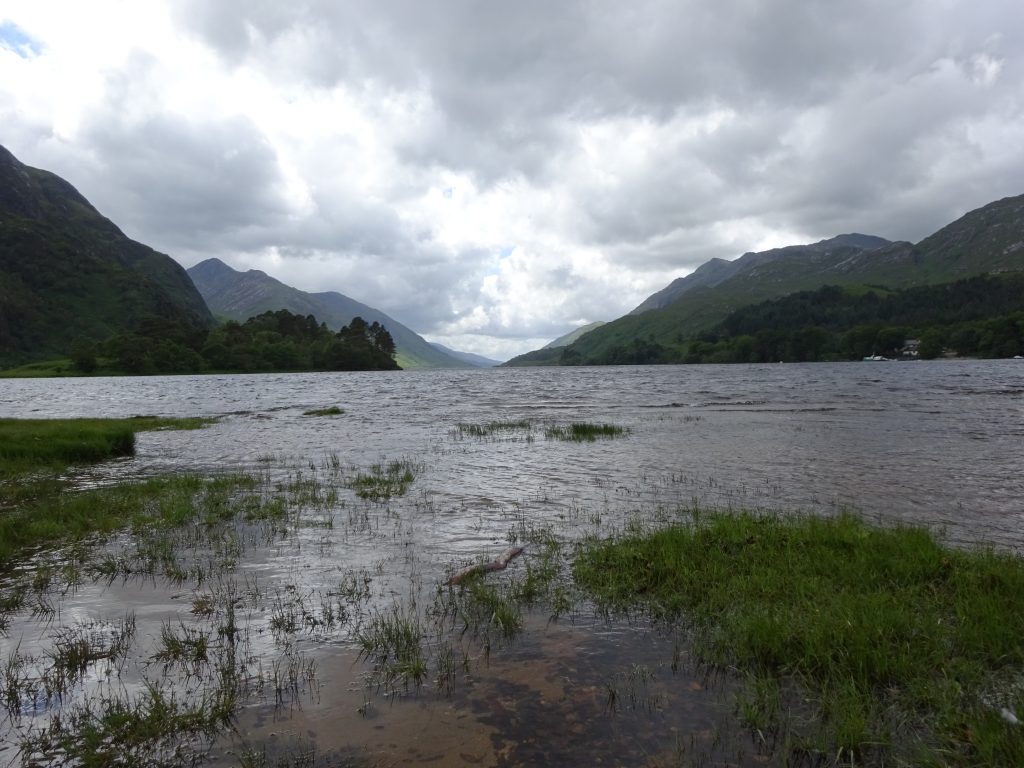 View From The Bottom Of The Bonnie Prince Charlie Monument

After a bit of a bus ride we stopped at Glencoe. Graeme let us have a look at the ‘Three Sisters’ and admire the view before he took us on a walk into the valley. The first part of the path wasn’t too bad, but Graeme took us off this path onto a trail, which would’ve been an easy walk, if it weren’t for the mud! 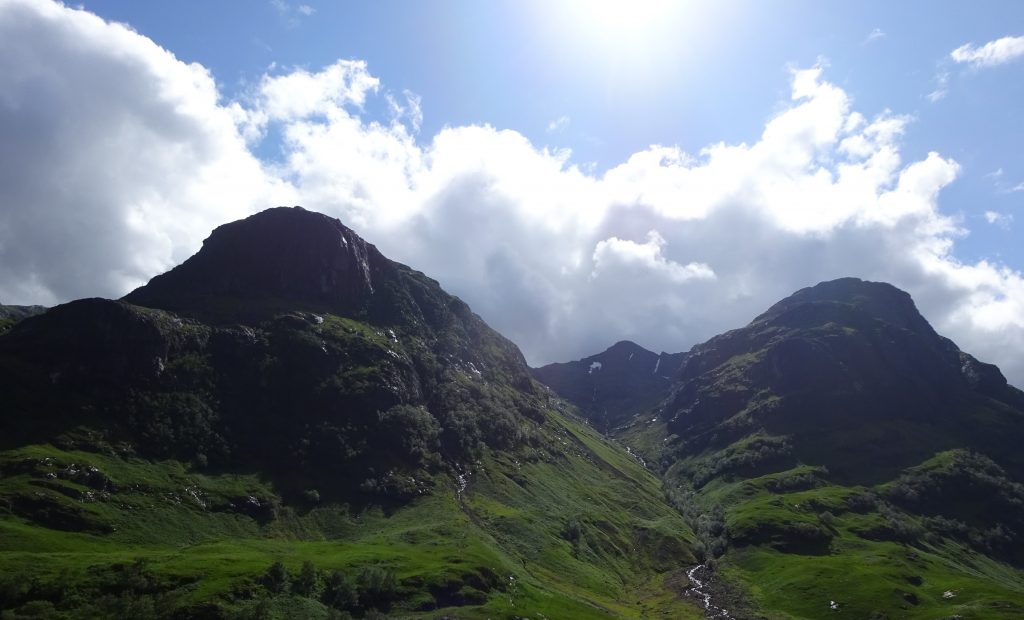 The Three Sisters At Glencoe

We stopped by a stream and here we had another ‘Story-Time’. Here, where we were standing, was the site of the Glencoe massacre. The MacDonalds of this area did not get their allegiance to the new King of England quick enough. It was meant to be done by 1st January. The MacDonalds oath of allegiance was just a few days late…

So in either late January or early February, a Campbell with approximately 120 men came to Glencoe. They were received by the MacDonalds and given the hospitality of the Highlands. Tradition states that host and guest can do each other no harm when they are given/accept hospitality.

Then one night the Campbells arose and killed the MacDonalds as they slept. 38 men were murdered and many more died due to exposure after they escaped.

This was a huge betrayal and a breaking of an unsaid oath. There was plenty of bad feeling between the Campbells and MacDonalds for years afterwards, and can still be felt now. The Clachaig Inn nearby still has a sign above the door stating ‘No Campbells.’ Graeme also told us a story about a friend who was in a pub one night and got talking to a stranger. Once he realised the stranger was a Campbell he said “I’d rather cut my own eyes out than talk to a Campbell!” Well, something to that effect and his friends had to drag him off!

Graeme ended this tale by telling us, the Campbells might make great soup, but they shouldn’t be trusted! In The Valley At Glencoe

We had a bit of time to wander around the valley, and ponder on what we had been told. Time to reflect…

Graeme also told us that the water in the stream was completely safe to drink and so advised us to fill up our water bottles. So I had a wander around the stream with Bunny and Dave, and of course I filled up my water bottle! There’s nothing better than clear, fresh stream water! 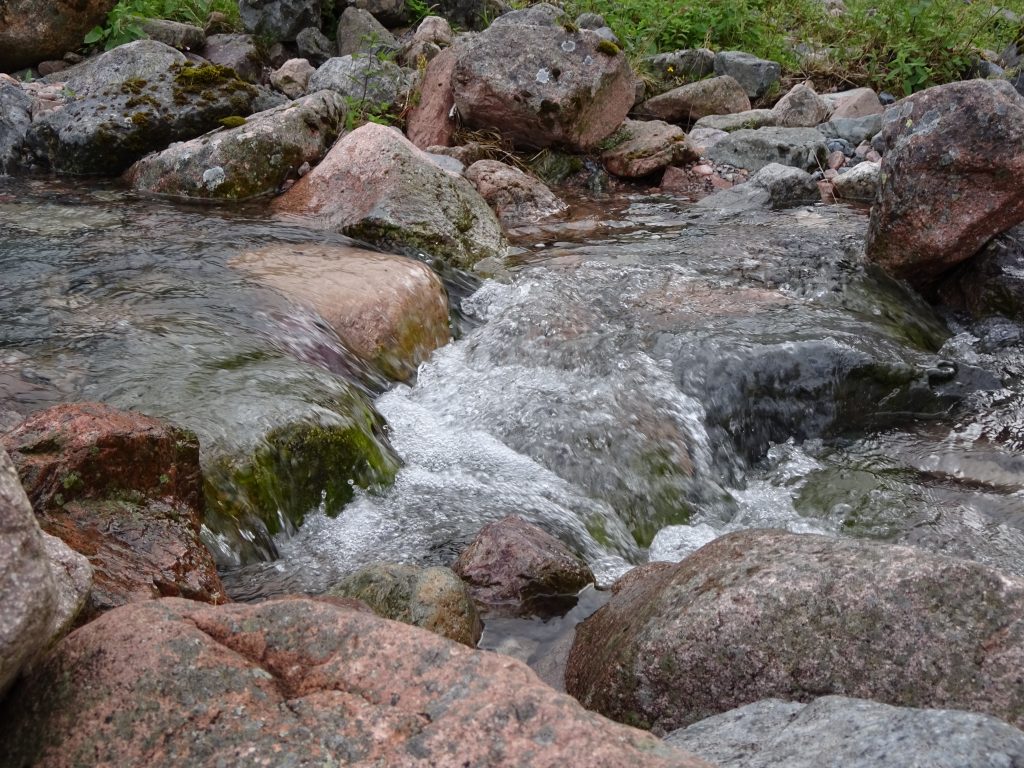 I also noticed a plant that looked like mint, but when I smelt it it wasn’t. So I asked Graeme about this and he was unsure what it was. Now I think it might have been Marjoram, but have no way of knowing now…

We climbed back up the slope to the bus and set off for our final destination – Oban. Graeme told us that there is a great Ceilidh Club to go to, which would be fun. The Ceilidh would start at 8pm. As we drove along, me, Dave, Bunny, Chrissy and Meagan tried to encourage everyone that we should all go out together, get some food and have some fun.

We arrived at Oban and checked into Oban Backpackers. We told people that if they wanted to come out with us, to meet in half an hour in the common room.

About 10 of us actually met in the common room! So we set off to find somewhere to eat. First we tried the Waterfront, but they didn’t have the room for us all. But they advised us to try their sister restaurant, Cuan Mor, along the main street. So we headed over there.

Cuan Mor had a table big enough for us, but it was outside. It was a little chilly for July, but it was comfortable enough and I was just glad it wasn’t raining! So we stayed here. The menu had a lot of fish on it and was very Scottish. I had Sea bass stuffed with Crab and it was lovely.

After we’d finished eating, most of us headed over to the Ceilidh Club Graeme had told us about. Ceilidh means ‘gathering’ and they do traditional Scottish dances. There is also a caller who tells you and shows you what to do.

A few from our bus that hadn’t joined us for food were already at the club. So we joined them. We also got drinks vouchers on entry, result!

I loved the Ceilidh! I was up for every single dance, dragging Dave with me! It is tiring, but so much fun. There was a tour guide from Haggis Tours who was also getting very into it! Believe, if you are ever in Scotland, hunt down a Ceilidh, they are awesome! The band was good, and when they were letting us have a break they had other dancers.

After the band finished there was a disco. Which was nowhere near as much fun as the Ceilidh! But we stayed for a bit with some of the others.

Me and Dave headed back after an hour or so of the disco. When we got back to the hostel we ended up playing pool with another traveller. He was from Africa and didn’t know how to play, so asked us to teach him, even though we are both terrible at pool! We intended to go to bed, but ended up still playing pool until the last ones came back from the disco! For the last day of Macbackpackers (but not the trip) go to Day 7. 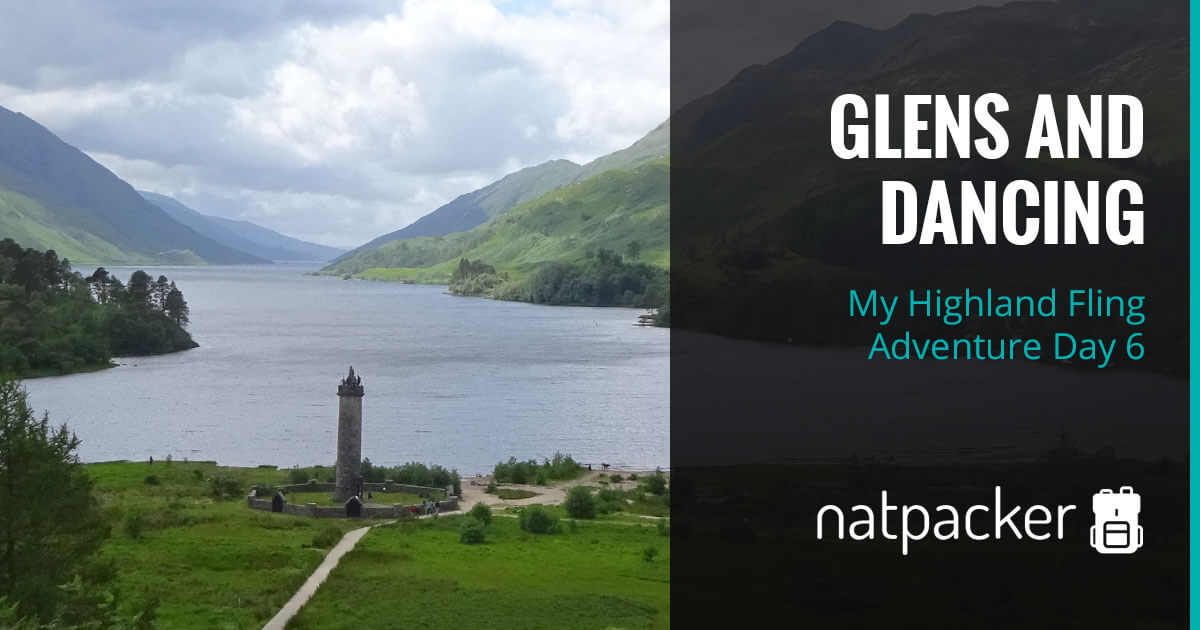