My Highland Fling Adventure Day 4 tells the tale of leaving Inverness and heading to the Isle of Skye with Macbackpackers. Along the way we stop at battle fields, burial mounds, clootie wells and more.

Miss any of the previous day’s adventures? You can go back using these links:

And It Wasn’t Me For Once…

Me and Dave went down for breakfast in the Inverness Student Hotel and I was far too excited by the fact there were scones! Not the usual toast and cereal that you normally get in UK hostels. Scones with jam and cream, a great way to start the day! The breakfast had to be paid for, as an honesty bar, but it was very cheap.

We met Bunny and a few others down at breakfast. After we’d finished our scones we headed out to the bus. Once we were all on Graeme took us to our first stop.

Our first stop was the Clava Cairns. As we arrived one of the girls in the group, Chrissy, realised that she had left her diary at the hostel. And then someone else realised they’d left their phone! And for once, it wasn’t me leaving things!

Luckily we hadn’t travelled too far from Inverness, so Graeme offered to nip back whilst we explored the stones. One Of The Burial Cairns

So as Graeme drove off to rescue the diary and phone, we explore the standing stones. This is a 4,000 year old cemetery. There are a few different parts to the cemetery, there are two cairns that you can walk into, though the remains of those buried are thankfully long gone. 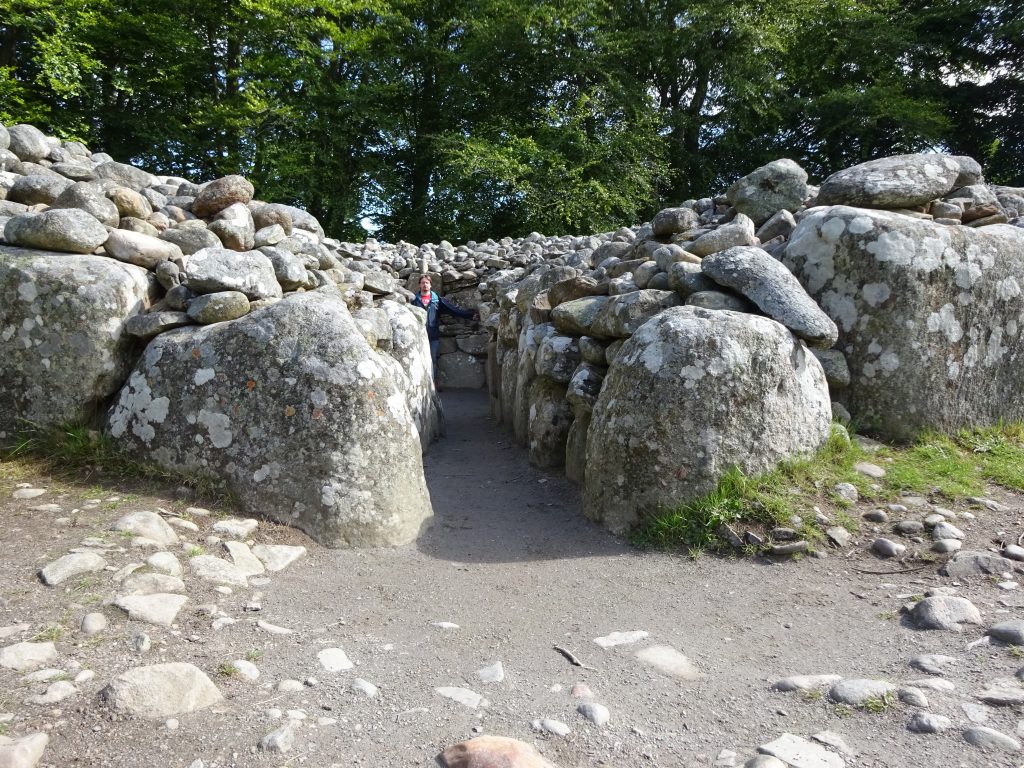 How the area is laid out suggests the importance of midwinter for the society that built the cairns and placed the standing stones. The passages through the two Cairns are aligned towards the south-west and there are three prominent stones that run in a line from the north-east to the south-west. Many similar sites across the UK have a similar alignment that seems to show the importance of the mid winter sun and winter solstice.

Graeme didn’t take too long before he was back. And we all climbed aboard the bus again. The phone was returned to it’s owner, but of course Graeme could not resist looking through the diary. He gave us a little preview of “…and I am in love with the tour guide…” which we discovered very quickly was him making it up as the diary was written in German! We were beginning to see more and more what a ‘cheeky chap’ Graeme was.

As we got underway again we saw another group of tourists taking a picture of a aquaduct. Graeme told us that every aqueduct in Scotland is normally mistaken for the one in “Harry Potter And The Chamber Of Secrets”, but this one was not it. However, we would be seeing the real one later in the tour.

Our next stop was the Culloden Battlefield. This was a somber experience. This is where the Jacobite uprising was defeated by the government in 1745.

We stopped by a old thatched roof cottage and Graeme told us a little of the history and about the fight itself. After the defeat lots of highland things were banned, such as kilts and bagpipes, luckily this is no longer in effect. The government would beat the remaining highlanders spirits over the coming years. They would burn cottages like the ones we stopped at, making farmers move on, which is where the expression of ‘being fired’ comes from. 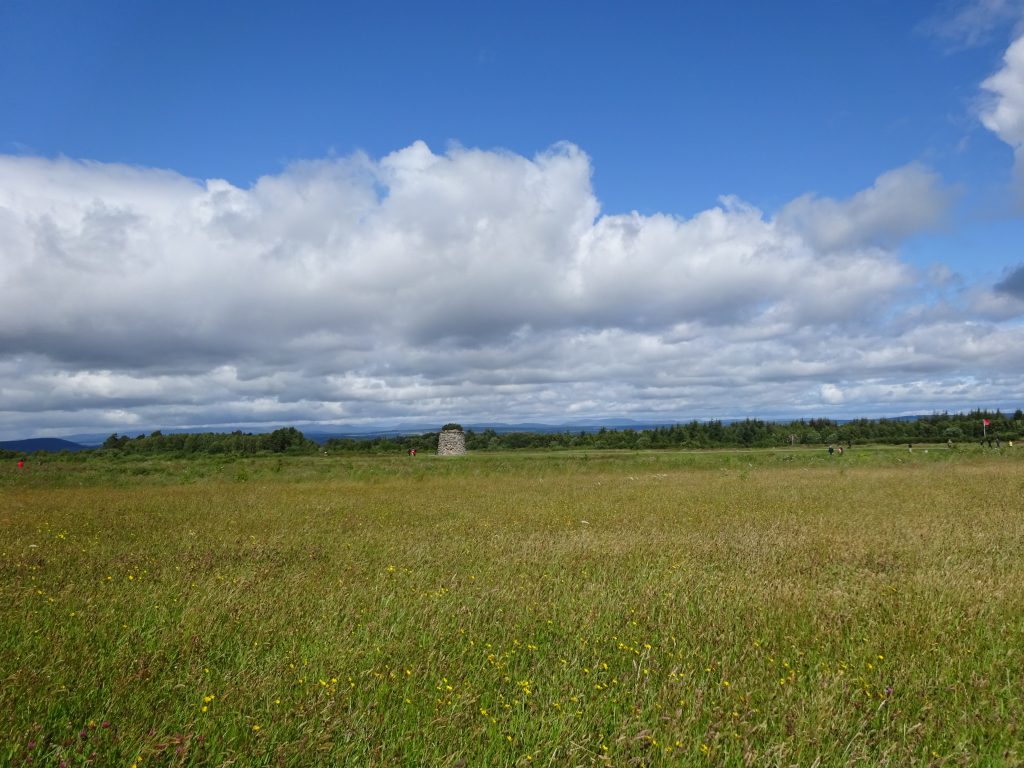 It was a tragic battle, with many casualties and deaths, many more on the Jacobite side. The main feature is a cairn in the field to commemorate those that died here. There are also flags that line the battlefield, showing where the front lines were, blue for the highlanders, red for the government. 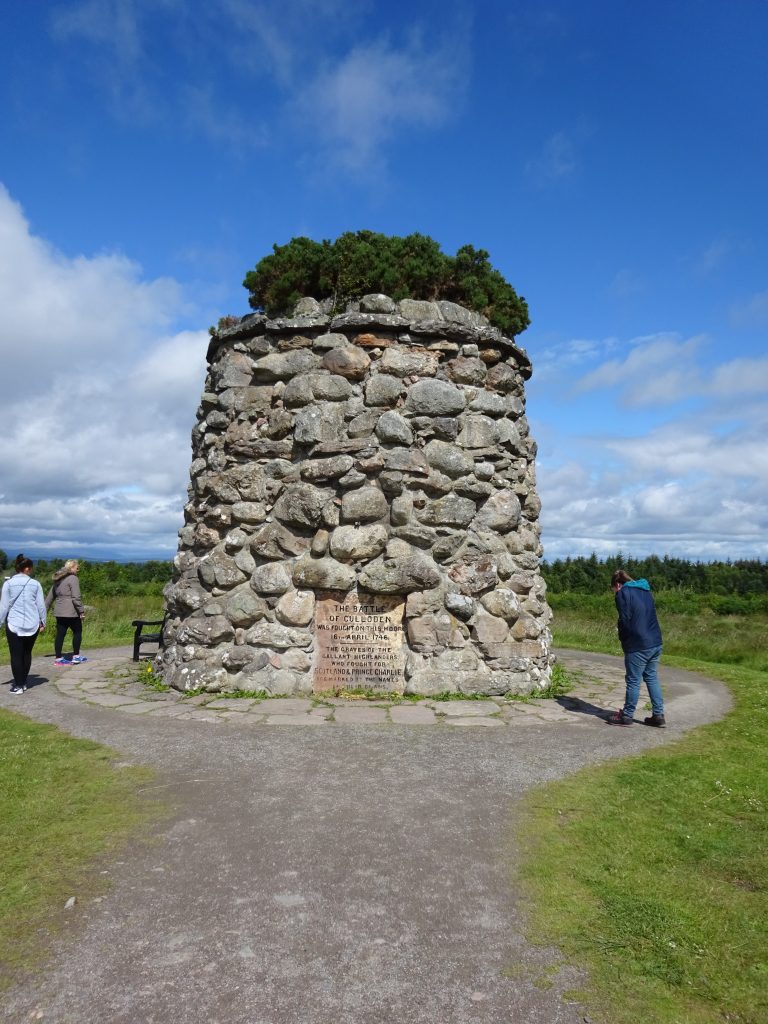 Me, Dave and Bunny spent our time walking the paths around the battlefield. It was quite a cold July day, but this seemed to match the gloomy, serious feel of the place. There was also a visitor centre, which we could’ve gone in and received a discount, with Macbackpackers, but we felt we didn’t have to time to do it justice and preferred to walk the battleground. The building has an interesting design, there are projecting bricks. Each one of these bricks that protrudes represents one of the fallen. Looking down the wall makes you realise just how many died. It is one to go back to one day. After we had walked around the battlefield we headed back to the carpark. Here was a happy moment, as there were some highland cows in a field. A woman on the tour was very excited by this (as was I), love highland cows. As we were watching the cows the woman (whose name escapes me, sorry) asked how us three felt being here, as it is our history and as English, would’ve been on the government side. A strange question and hard to answer. 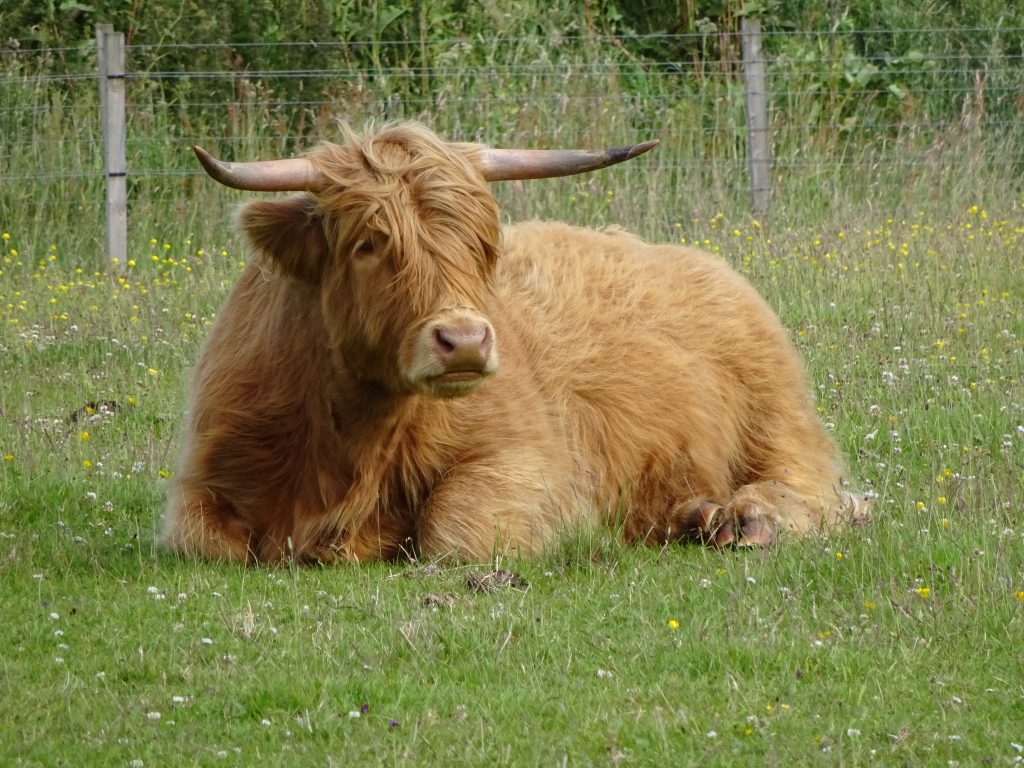 We headed off again, all a little quiet on the bus. All in our own thoughts. Thankfully the next stop was a cheerier one!

We stopped at a ‘Clootie Well’. Clootie means a strip of cloth or rag. Here you are meant to dip a piece of clothing into the water and tie it to a tree for the faeries, as an offering. It can be done to ask for healing or just to honour the spirit, faerie, or the modern version of saints. I prefer the faerie idea…

One guy in our group was happy to take off a sock and complete the ritual. I couldn’t however, as it goes against my “Take only pictures, leave only footprints” belief.

Graeme also told us about a typical Scottish desert ‘Clootie Dumpling”. This is made by combining suet and fruits in a piece of ‘cloot’ or cloth which would then be hung over boiling water to cook. You can’t go wrong with fruit and suet! A Picnic Lunch And A Couple Of Animal Stories

As we set off again, Graeme told us a story – and he has an amazing story voice! Anyway, he told us about some dolphins, on what I think was the Moray Firth, that have recently got very fat. They realised that fish come to the mouth of the firth and they literally sit and wait for the fish with their mouths open…

Our next stop was Corrieshalloch Gorge. Here we had a walk to see the waterfall. We all stopped for a picnic lunch on some rocks. The whole group was getting to know each other by now, so it was good to chat to everyone more. We had plenty of time to complete the walk and fully explore the area. And it was a beautiful area, well worth an explore. After we got back to the bus and set off again, Graeme told us another story, with his amazing story voice. There was also an incident with a load of seagulls. The seagulls were near a distillery and they all seemed unable to fly. It turned out they had actually got drunk on the waste…

We had plenty of Loch views as we carried on driving through the afternoon. Our next stop was a viewpoint of Eilean Donan Castle. As we looked, an Australian in our group (once again, I am rubbish a names) pointed out that the flag was lowered to half mast and asked what this meant. Graeme was being a little quiet at this point. A flag at half mast normally signifies a death…

He told us a story about this castle though. Apparently it had been in a clan for some time. And at some point the head of the clan married an American woman, who was very excited to come into a castle – her he did a great impression of an American girl saying “A castle? For me?” She probably expected a disney princess castle rather than the ruin on a rock. But the castle has been rebuilt, so is not as much of a ruin as it was now! We then went to the castle. It was completely shut down, although we were still able to cross to the island that the castle is on, just unable to enter. And it turned out that there had been a death, which was why the place was shut. A long standing staff member had died. Graeme told us about her, as he had got to know her over the years of being a tour guide. Apparently she would often give him homemade jam, so a bit of a sad day…

Over The Skye Bridge

We got underway again shortly, as we were unable to do much with the castle being unexpectedly closed. Our short journey took us across the Skye Bridge to Kyleakin, where we would be staying. We went to the hostel, the Lochbuie Guesthouse, which is part of the Skye Backpackers. Our group had an entire house to ourselves, it was awesome! Graeme gave us Macbackpackers wristbands, telling us that it would get us discount on food at the pub across the road. The pub was called ‘King Haakon’ ironically, ‘Haakon’ translates as ‘King’ so the pub is technically called ‘King King’. Graeme told us that

Me, Bunny and Dave decided to cash in the discount and go over for tea. We were joined by a few from our group, Charlie, Karma and Chrissy. Most of our group actually appeared, but they didn’t have very big tables. So me Dave and Bunny ended up on a table with Karma.

Here I had a haggis in a whisky sauce for a starter. This turned out to be haggis with whisky, it was definitely pure whisky and not a sauce! For main me and Dave shared a seafood platter, I think most of the group paired up to share a platter. The platter was amazing! So much seafood! Prawns, haddock, pickled fish, salmon, crab and more! And all so good!

After eating we noticed that a load of people from our tour had gone outside. So we joined them. It turns out there was a lovely sunset over the Skye Bridge and we were just in time to witness it! 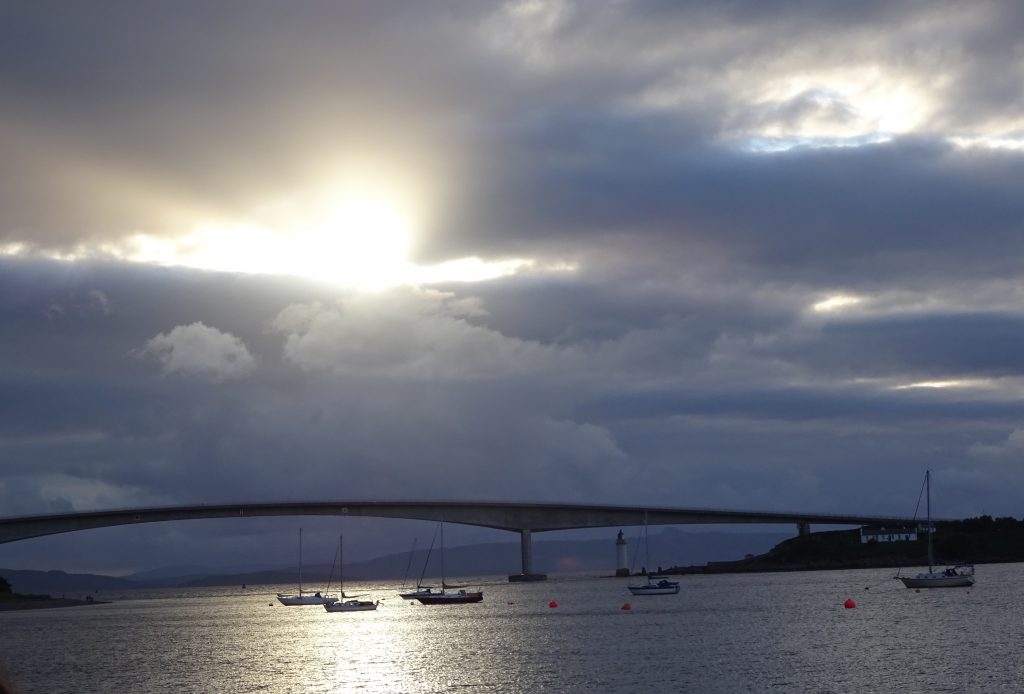 The Skye Bridge At Dusk

Quite a few of us stayed for quite a while after the sunset. It was at this point we really started to get to know one and other.

Ready for the next day? A full day on Skye is Day 5 of My Highland Fling Adventure! 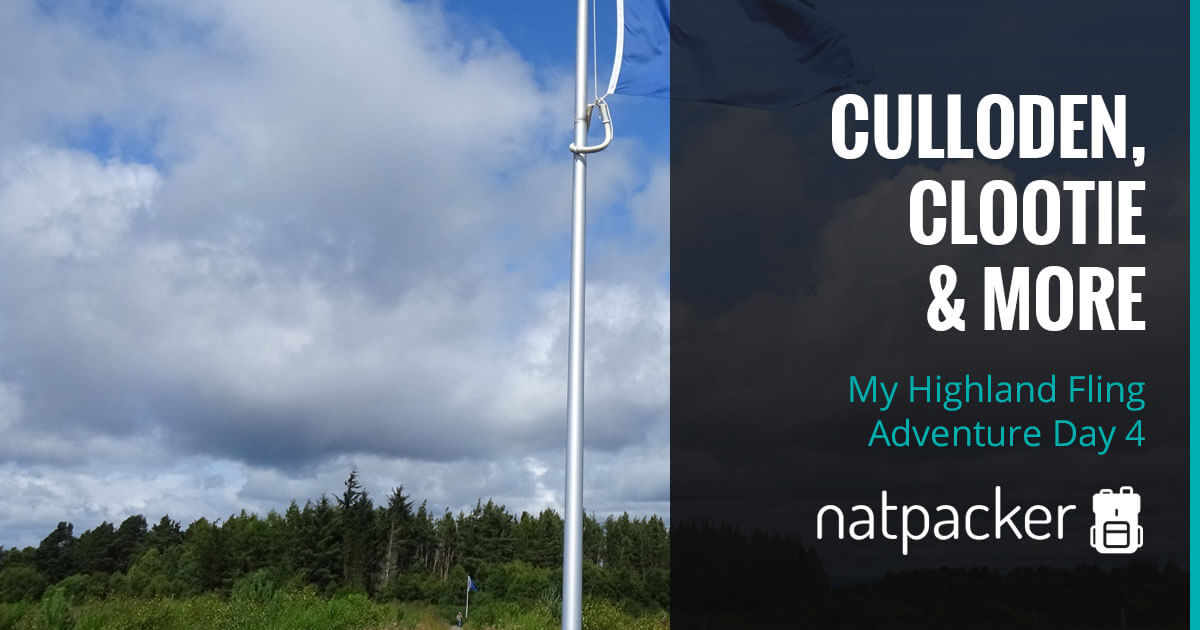