My Highland Fling Adventure Day 7 tells of the Macbackpacker journey back to Edinburgh. The Macbackpacker tour comes to an end on this day… But there’s still plenty of sights and stops along the way!

Missed any of the adventure so far? Go back using these links:

The morning dawned and the Macbackpacker group awoke, some a little worse for wear after the Ceilidh! We left Oban Backpackers and all managed to trudge onto the bus in time. We were all immensely jealous of a couple on the bus – they’d got up early and got a takeaway fry-up! So jealous! I think a few of us could’ve done with that! The bus set off and we were all quieter than we had been for the past few days!

Our first stop of the day was an old, pretty Scottish Church. I can’t remember where it was or what it is called. It had a big courtyard and was very interesting. There were interesting sculptures on the walls and the emptiness made it feel very special. 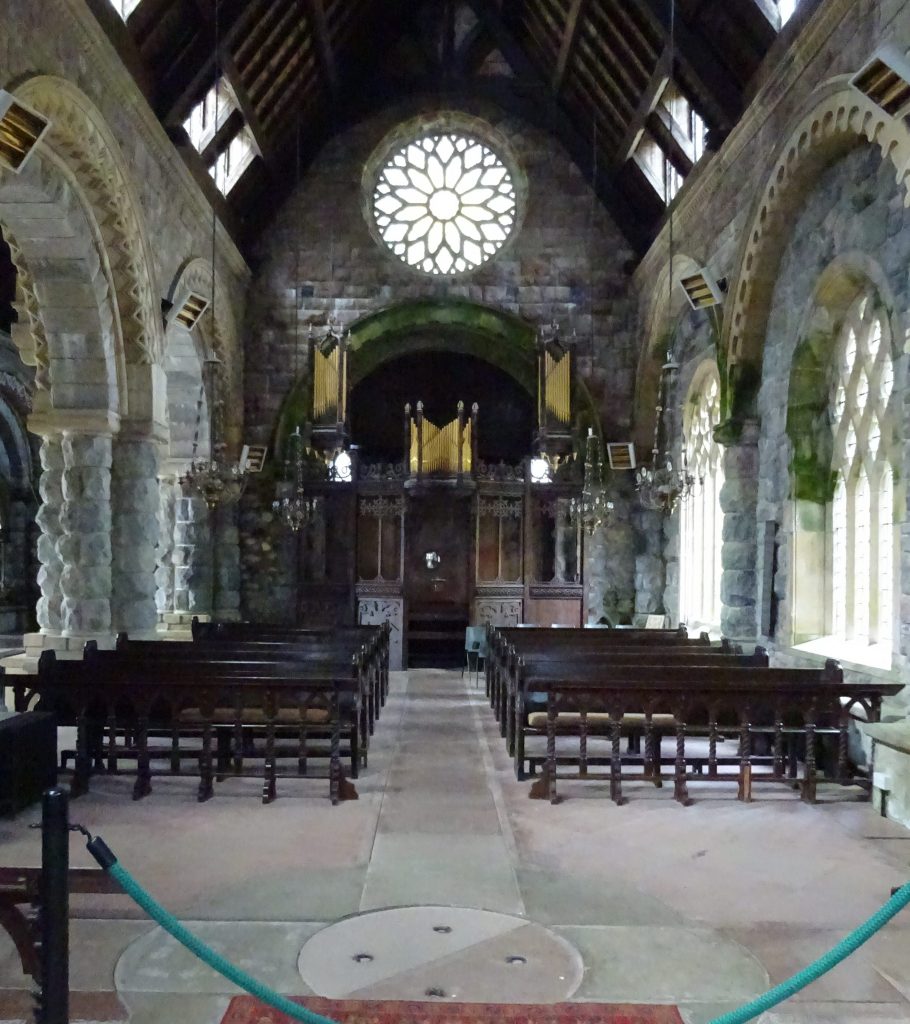 Graeme pointed out the Clan Seats, which is where the chiefs would sit. Then we all had a wander around. I noticed a small bird that was trying and failing to get out. Unfortunately it was too high up and so there was nothing I could do… I hope it managed to get out. 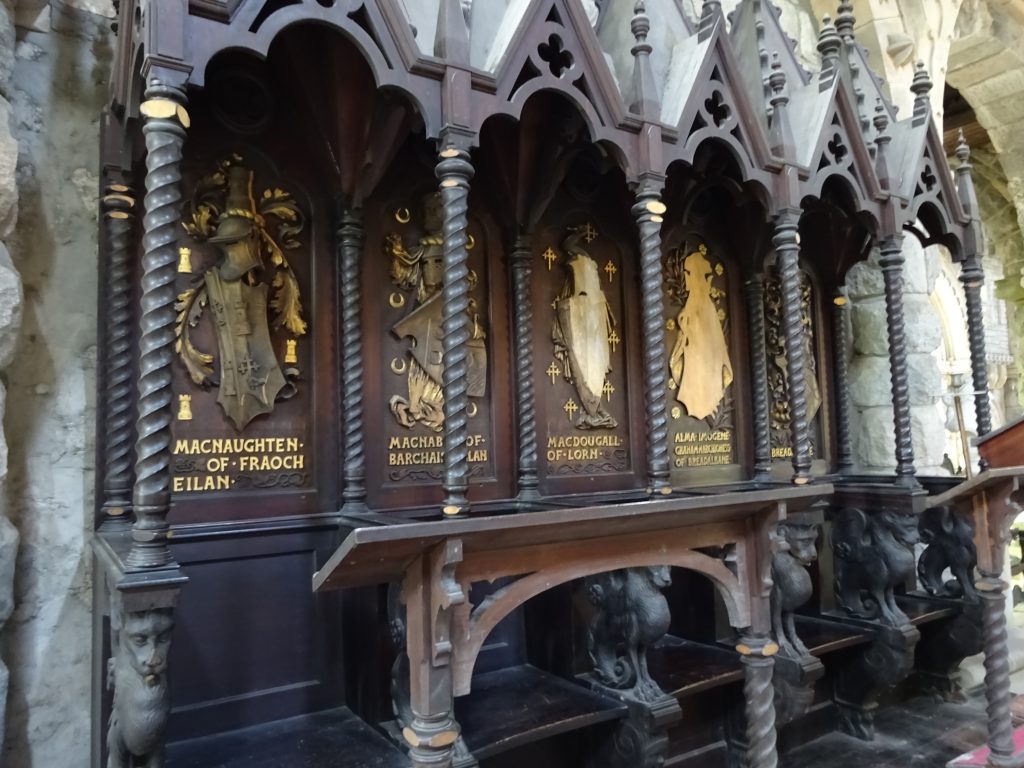 Clan Seats In The Church

We headed outside and it was actually a lovely day. There was a sundial here and when we pointed it out to Graeme he told us that it is a Scottish invention! I’m not sure on this… I’m sure the ancient Egyptians had them… But according to Graeme the Scots invented pretty much everything!

On the way out I also noticed some grave guards, like we’d seen in Edinburgh. These are cages over the graves to stop body snatchers! 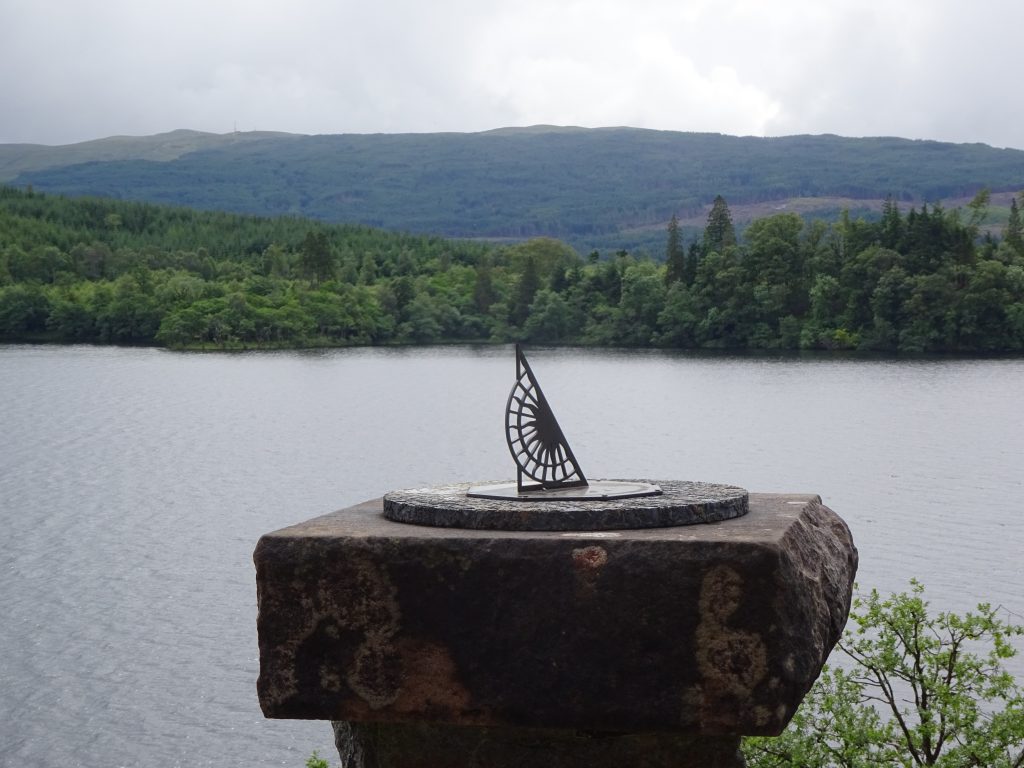 Sundial – A Scottish Invention According To Graeme!

A Small Disappointment And A Little Whiskey

Once again, I have no idea where we ended up next. There wasn’t much there though! It was basically a big shop. But I know why we stopped… Graeme was able to get us a sample of whisky, although I couldn’t tell you which brand! We had two samples, and the second was infused with honey and was delicious! The honey took away the usual burn you can get with whisky drinking!

Me, Bunny and Dave wandered around the shop after the whiskey tasting, and it took a while! I found a Scottish Faerie Tale book, which just had to come with me, as I am a bookworm!

We headed outside and as Graeme had pointed out the nearby chippy as a great chippy, we headed over. It was about lunch time and we felt chips were just what we needed to clear our heads! I have to admit, Graeme was wrong on this one, the chips were very disappointing! I guess he can’t always be right when it comes to food…

When we set off again it wasn’t long before the next stop. We stopped at a viewpoint of a castle ruin and lodge. Ok, it wasn’t technically a viewpoint or a lay by, but the view was great! 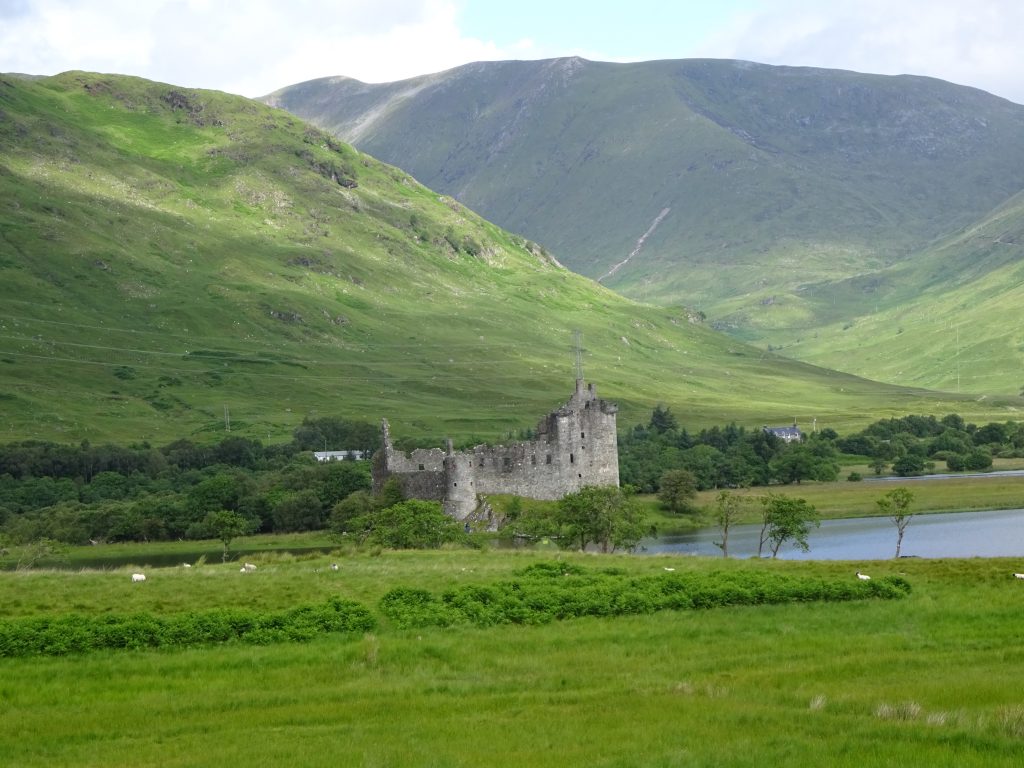 View Of The Castle And Hunting Lodge

Callander was the next main stop, and this wasn’t too far. As we arrived Graeme pointed out a good bakery. Even after the disappointing chips, me, Bunny and Dave still thought Graeme has been right on more occasions than not when telling us where to eat! So we headed over.

The bakery was Mhor Bakery. Mhor is gaelic for ‘great’, and the name was correct. We each had a very good pie (although not as good as MacKenzie’s on Skye). We bumped into Meagan outside and she had bought the biggest merengue I have ever seen! I didn’t know they could be made that big!

We explored the main street for a while and soon came across an ice cream shop, so we obviously had to have one!

Callander is quite small, but it’s a very pretty town. It definitely had the feeling of a town that comes to life in the summer – as if it’s main income is tourism. With the main street being filled with old fashioned sweet shops, places selling ice cream and other selling baked goods.

We left Callander and headed to Doune Castle. The gatehouse of this castle is impressive. Unfortunately we didn’t have enough time to go in, so could only explore the outside. But the outside was impressive anyway. There were some great views, as there always is in Scotland! 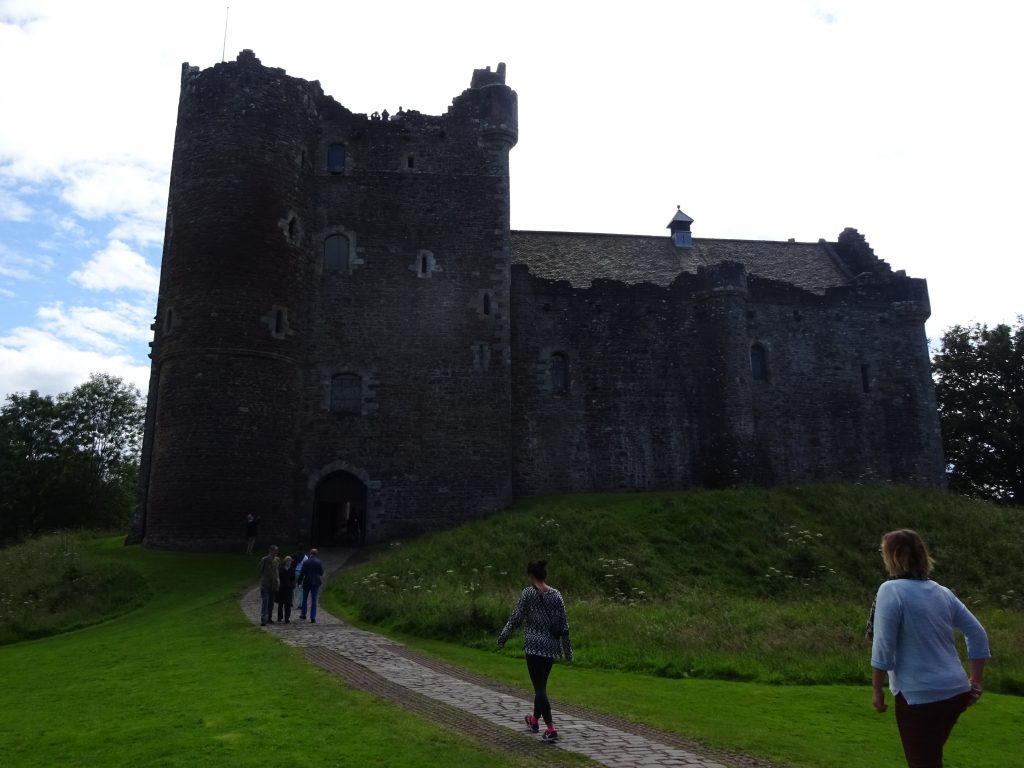 The castle was used in the film Monty Python And The Holy Grail. Each side was used for a different scenes. As soon as we stepped of the bus me, Bunny and Dave were doing the horse riding impressions from the film, because we are so cool…

After walking around the castle (we couldn’t do the horse riding impressions ALL the way round) we headed into the shop for a little nosey. I was highly amused to see that they sold coconut shells, but for any Monty Python fan, this makes complete sense!

We also spotted some of our group coming down the stairs opposite the shop… Turns out they had accidentally wandered in! Oops! 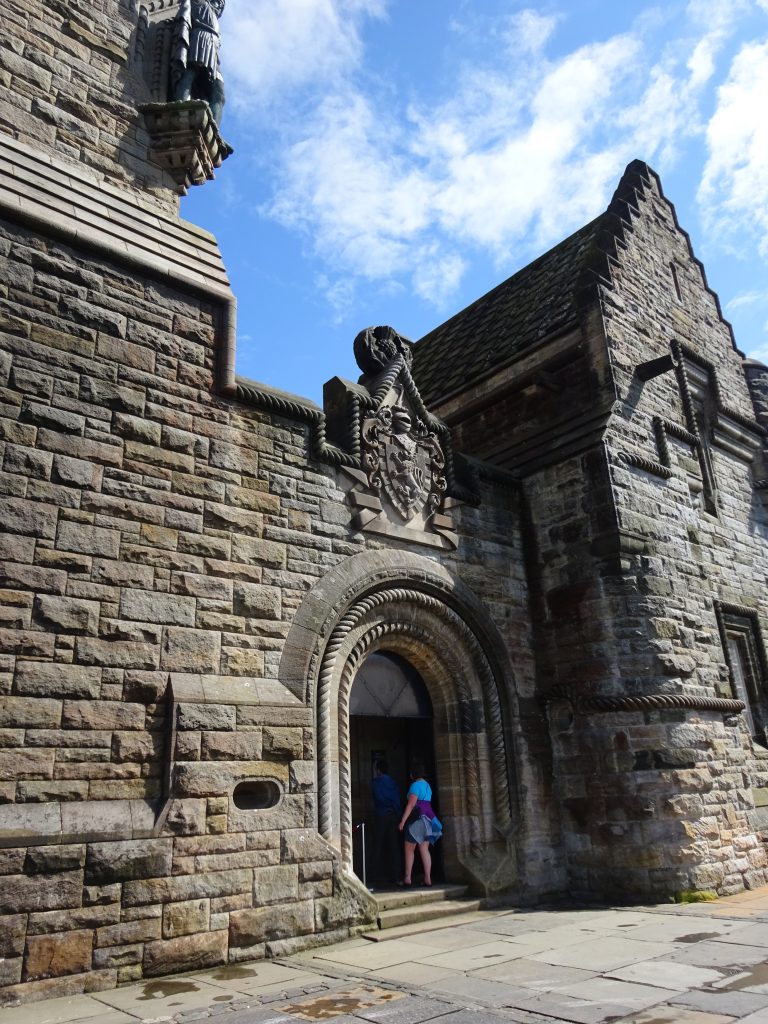 The Gatehouse At Doune Castle

We were soon back on the bus and on the way to our final stop before heading back to Edinburgh. The stop was the William Wallace Monument.

From the car park there is quite a hill to climb to get to the monument! The hill was steep and muddy in places, but with some spectacular view. Once we reached the top we all admired the view before walking around. Unfortunately there wasn’t time to go in the monument to climb to the top, but I can’t imagine the view got much better anyway! 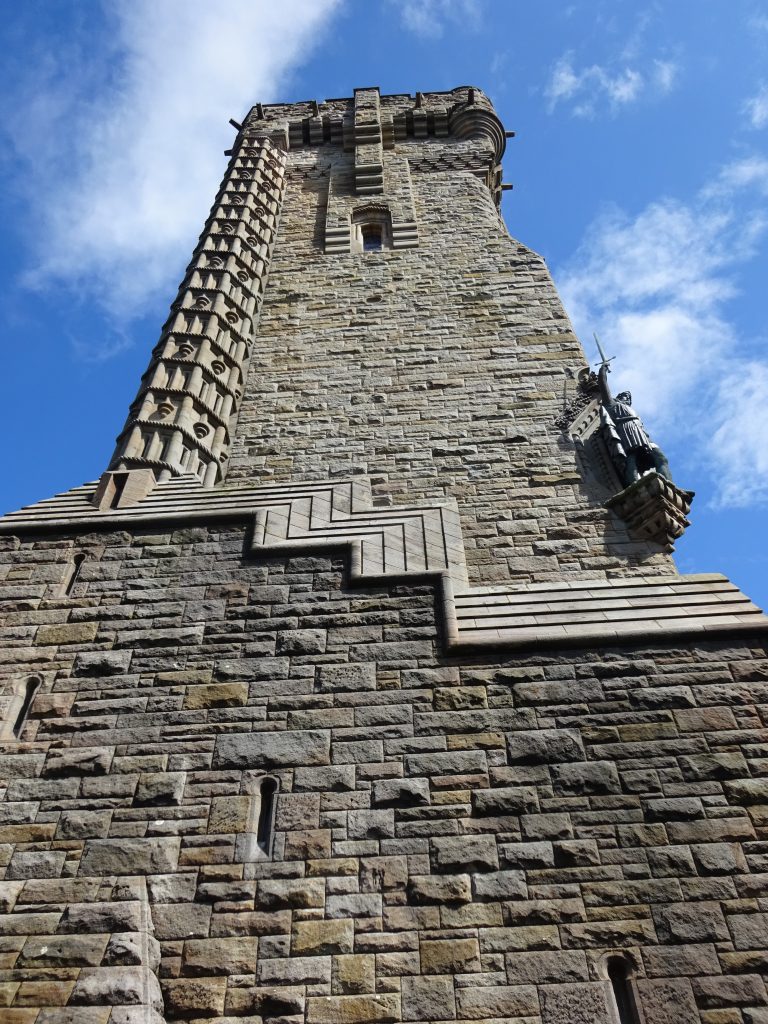 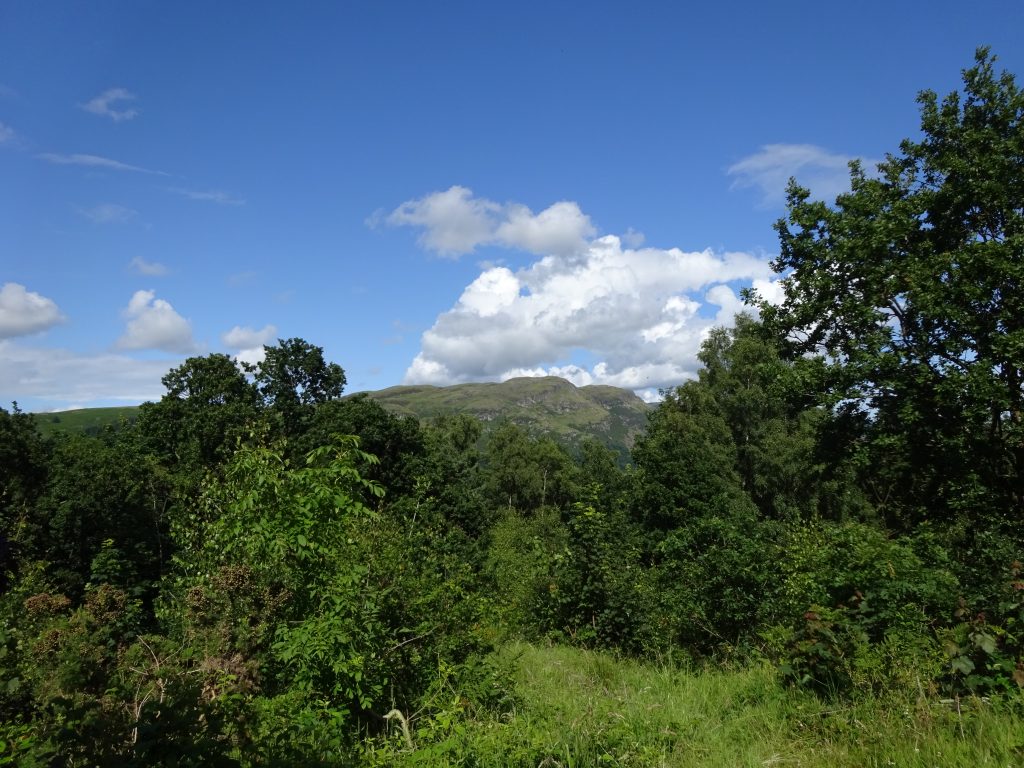 The View From The William Wallace Monument

Then it was back down the hill with a bit of slipping and sliding! At the bottom we came across the Haggis guide who was a little too into the Ceilidh the night before, he seemed a little worse for wear… Worse than us lot!

Back To The Big City

There wasn’t much excitement in the journey back, as we had to leave the small windy roads and get on the big main road. However Graeme did point out the Kelpies, near Falkirk, which can be seen from the road.

As we entered Edinburgh Graeme changed the music playing to ‘500 Miles’ by the Proclaimers. And before we knew it, we were all ending the tour with a brilliant sing-a-long!

Graeme pulled up outside the Castle Rock Hostel. He told us that he would be at the Royal Mile Tavern later and that we could meet him there. The wristbands he gave us on Skye would get us discount there. Meagan had a party she was going to, but said she would try to come before hand. The rest of us were up for it. So we all hugged each other good bye, promising to meet later and headed in our separate directions. Me, Dave and Bunny headed back to Malone’s hostel, ready to tackle the stairs! 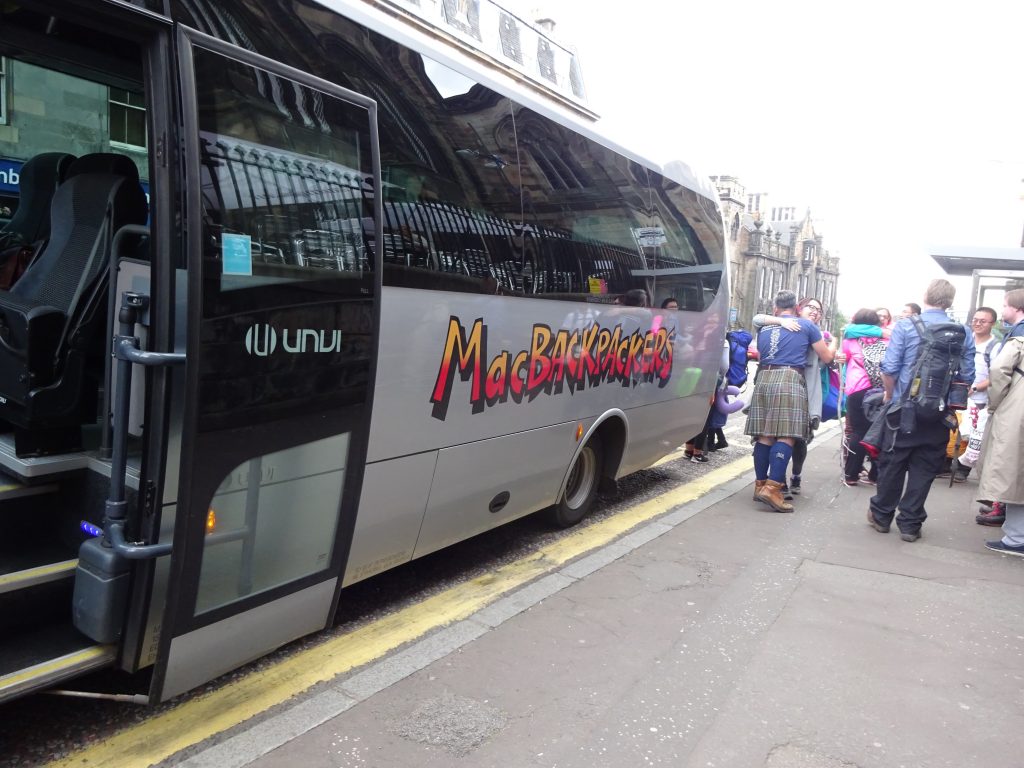 A Crazy Night In Edinburgh

A few hours later, the three of us headed out to meet everyone at the Royal Mile. We weren’t the first their and neither were we the last. As the table filled, we ended up having to pull more and more tables together!

Graeme didn’t show up at the appointed time. So we all decided to not wait any longer and order food. I had Haggis, Neeps and Tatties, the ‘classic’ that I had not had so far on this trip and felt I must have. It was very good, not my first time having haggis, so I knew I liked it.

Graeme eventually turned up and gave his apologies. We were all quick to buy him a drink to thank him for his amazing guiding and especially the story times! But when we ordered him his wine it came in a MASSIVE glass, he must get it special for bringing us all in! And every time he had a wine it was in this massive glass. And I mean scarily massive.

Who Exactly Is The Guide?

Meagan came and told us that we could all come to the party she was going to. The drink had been flowing, so a few of us decided to go with her. It took a while to convince Graeme to come. It was in the Voodoo Lounge and he thought that meant someone’s house and so needed to bring a bottle… I think the amount of wine we’d poured down him had clouded his mind!

It was an interesting party, mainly because we steadily got Graeme more and more drunk! It was rather fun and there were about seven of us that gate crashed! Although there’s not much to tell, there was just the usual dancing and drinking that happens at parties. But it did end with a few of us (including me and Dave) having to guide Graeme, the tour guide, back to his hostel. Chrissy had to take him the final part on her own, as she was in the same hostel and it was the opposite direction to everyone else! I believe she had fun with that. It created an odd state of affairs getting the tour guide drunk and having to be his guide!

Don’t worry! The adventure doesn’t end here! There’s still a couple of days left! Go to Day 8 for the next day in Edinburgh! 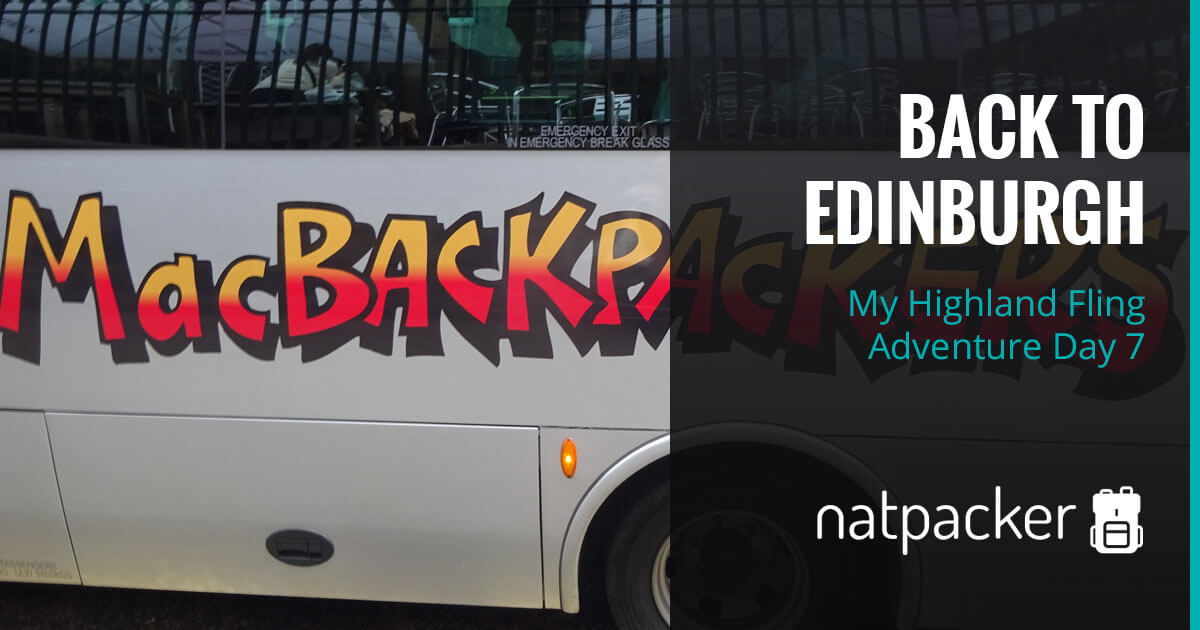